Deleted
9 years
So many updates. Where do I start? Donovan's head is so big that I'm not surprised it got bruised and it great to see consistency leaking into the USMNT. Some great results!
1
Login to Quote

shylax
9 years
I'm still working out my format for this kind of story since international management is different. I do lots of mini updates instead of fewer big ones since there aren't as many matches as in club management.
Login to Quote

Carlos Bocanegra will miss the rest of the Gold Cup since he sprained his ankle and will miss 6 weeks. The US is unable to call up another player at this time. While the American supporters are savoring the US's play as of late, a small but vocal contingent isn't liking that the US is sending a full squad to the Gold Cup since Mexico only sent their B squad.
Login to Quote

k1rups
9 years
Damn that's tough! and with no replacement what will you do?
Login to Quote

shylax
9 years
Sheanon Williams will take over the left side. Brek Shea can play left back if I had to have him to, but I would rather have him on the left wing.
Login to Quote 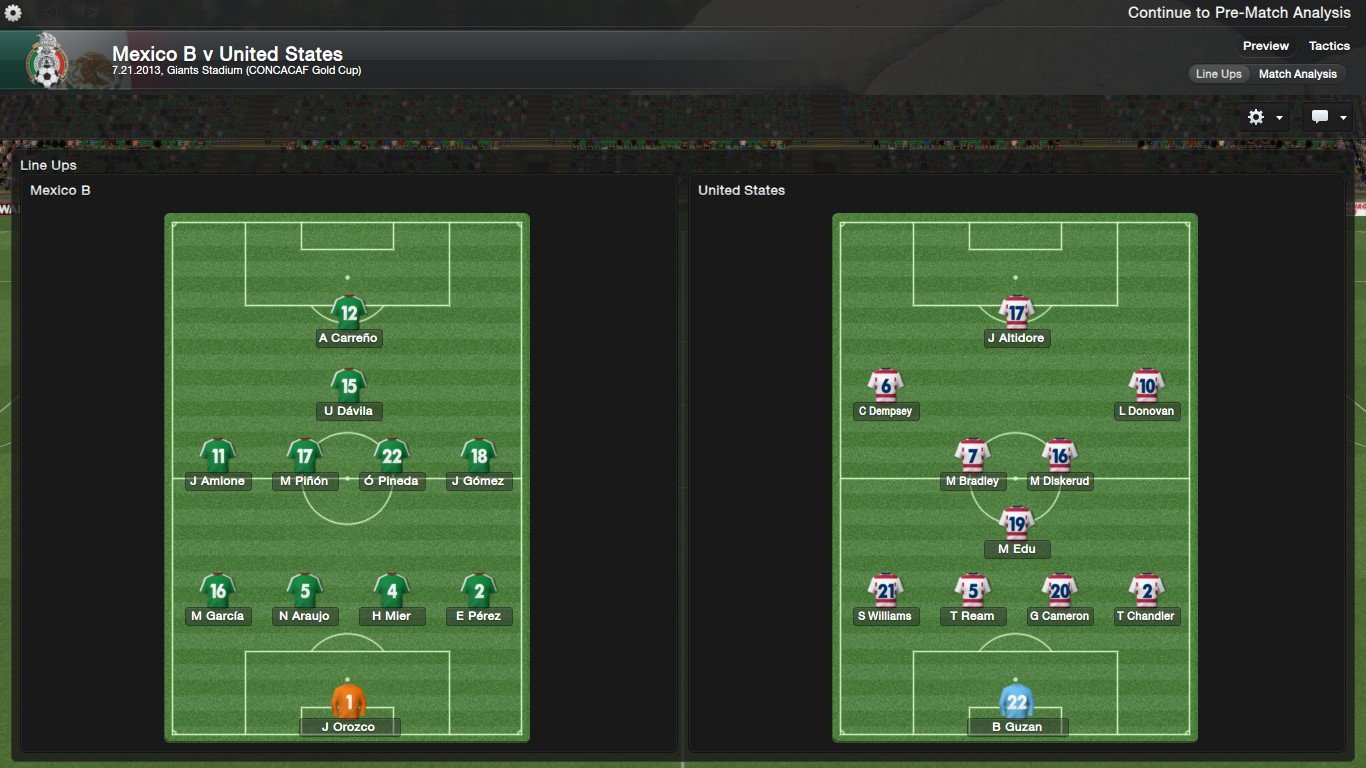 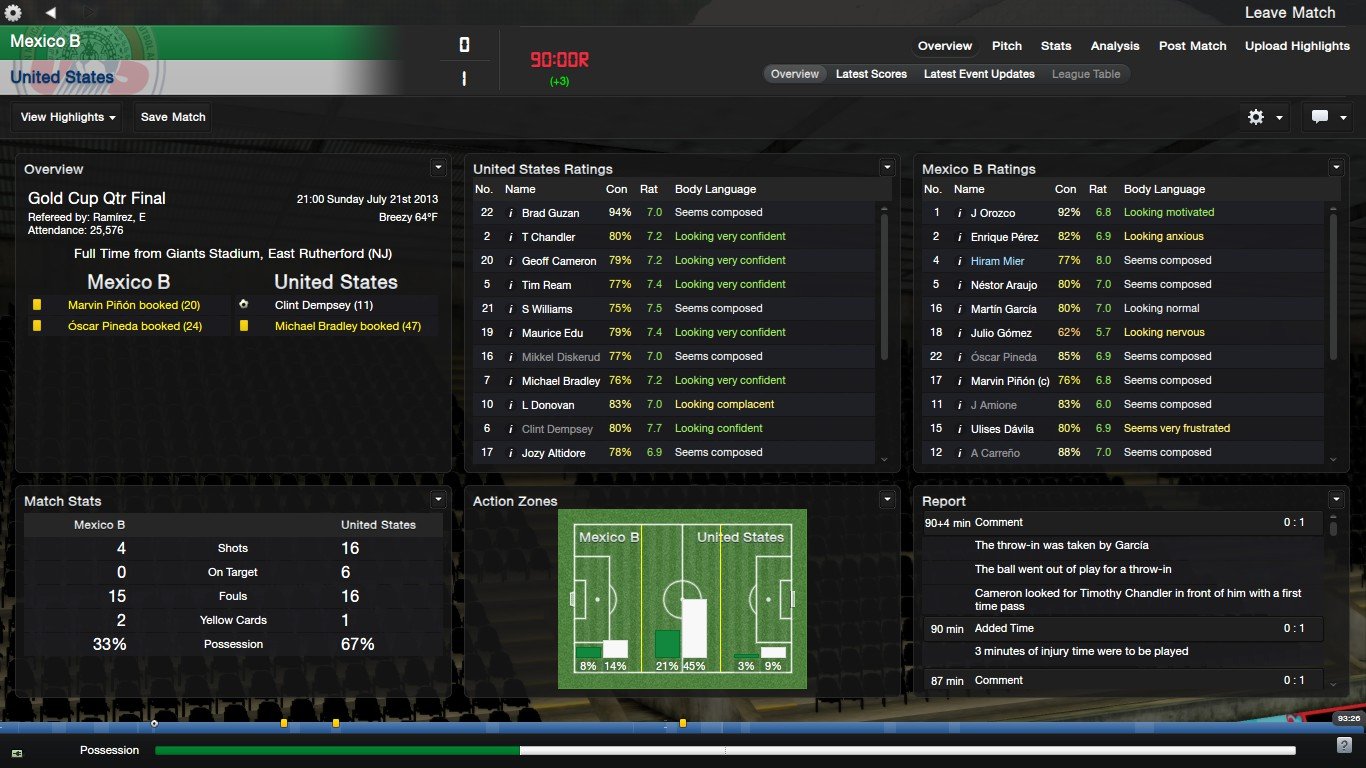 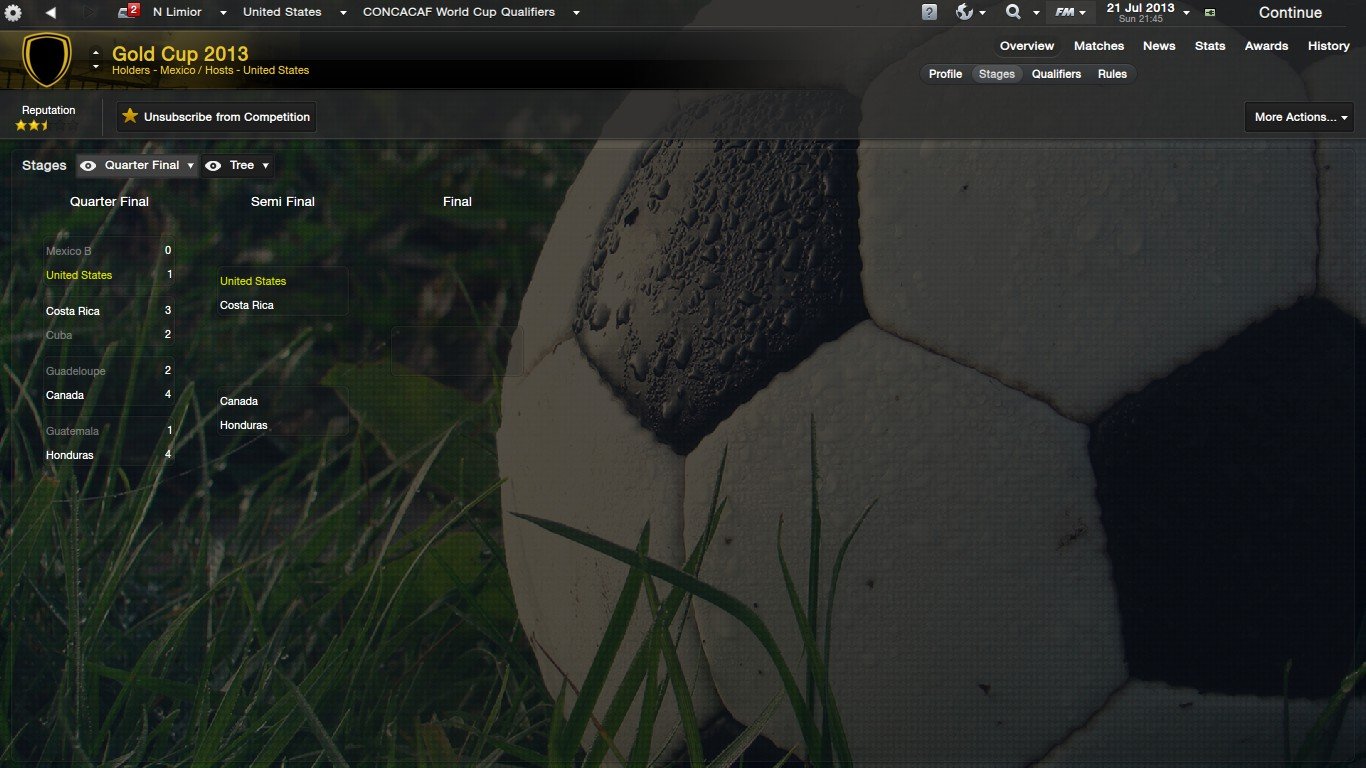 Thankfully, Clint Dempsey's superior dribbling and running created the difference, otherwise it would have been a much longer night for the United States. Still, they did not even allow a shot on goal against Mexico and have their tournament clean sheet still on.
Login to Quote 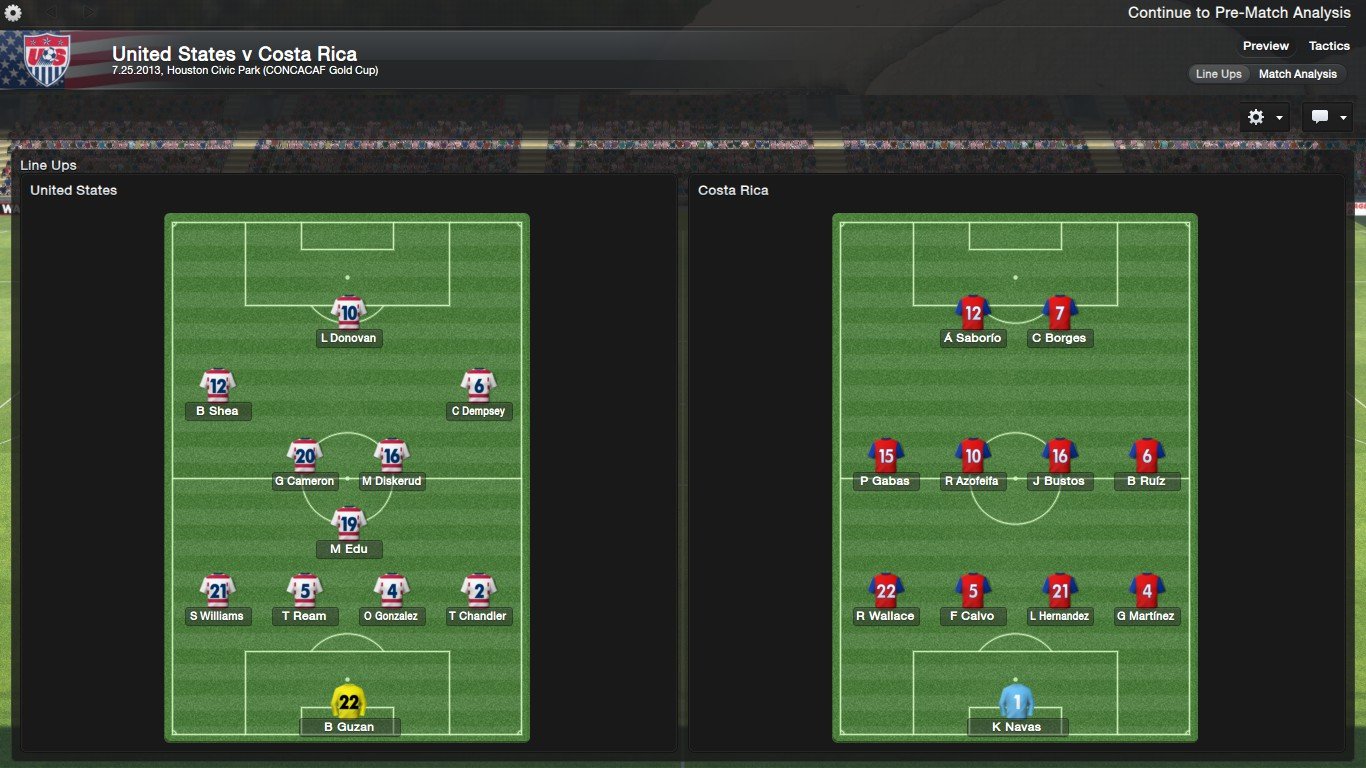 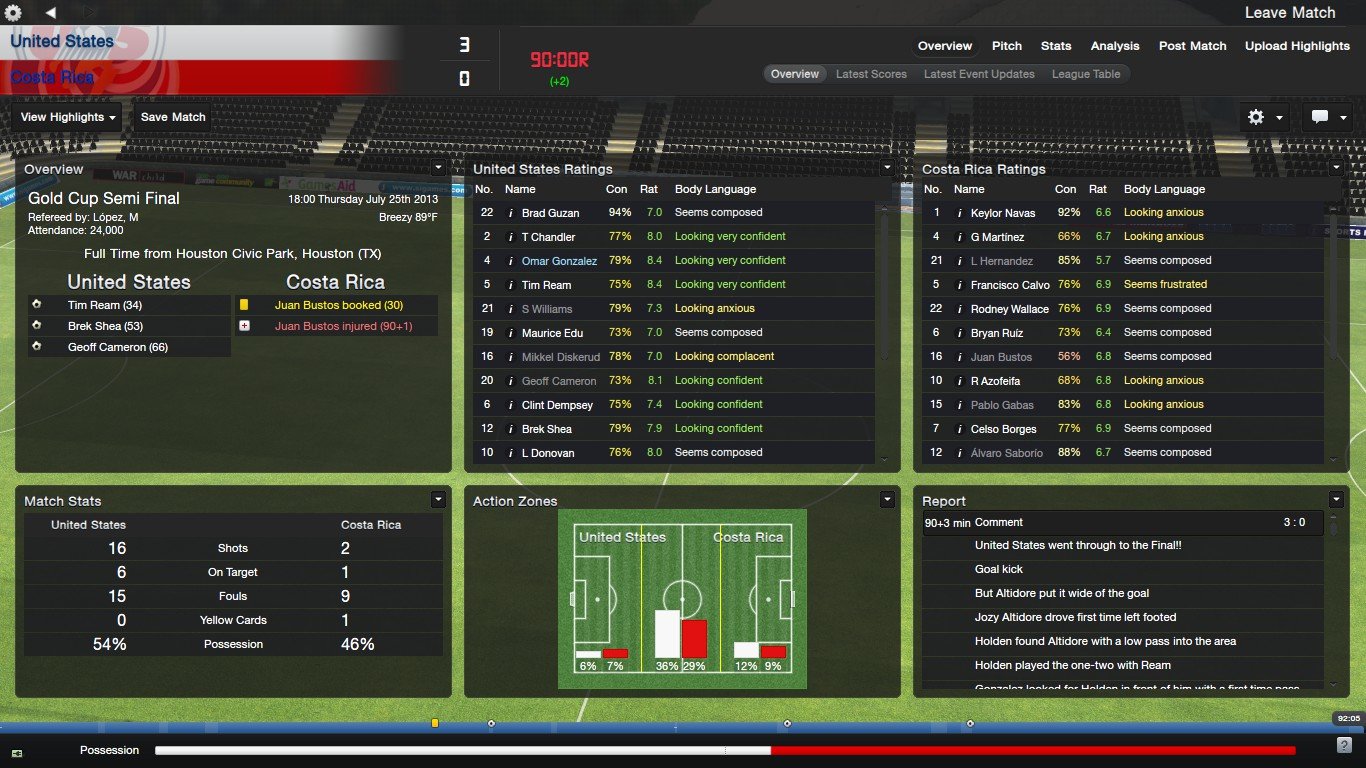 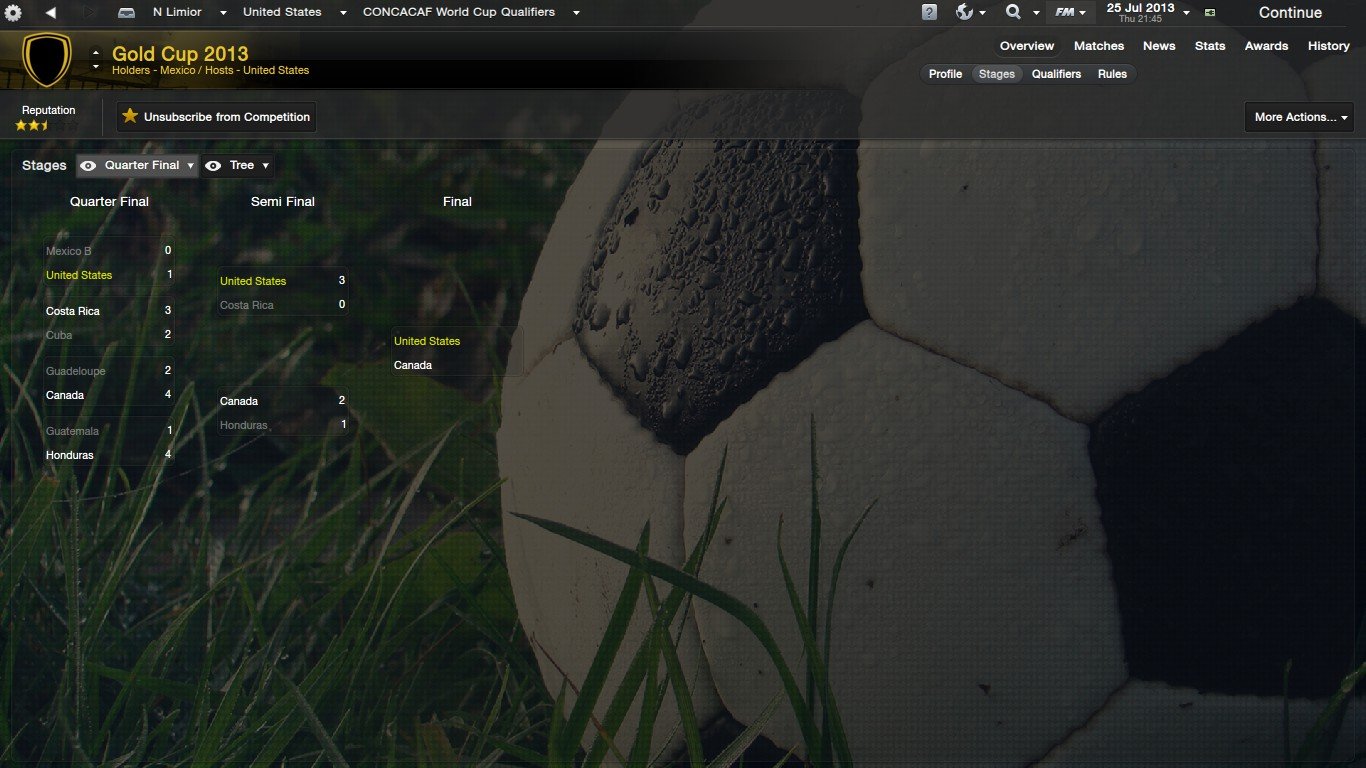 It is really surprising that the US's opponent in the Gold Cup Final would be another member of their group, Canada. The US defeated Canada 2-0 in what was a dead rubber for the US since they had already secured qualification and the top spot in the group.

Sebastien Le Toux has suffered a twisted ankle during training and will be out 2 weeks. The US is unable to call up a replacement, but with one match left and Le Toux unlikely to crack the lineup anyway, it isn't seen as a big deal.
Login to Quote

AlexTHFC
9 years
I'm really enjoying this so far, I always like the WC stories so I'm glad you're doing one

The United States narrowly won the Gold Cup Final over Canada, but everyone is talking about Michael Bradley's vicious foul that caused him to be sent off, when he elbowed Atiba Hutchinson in the head. Nathan Limior said in the post match press conference, "Michael Bradley is an important player to us, but he did an incredibly stupid thing tonight, and I let him know that. He is a great player and has no need to rely on that kind of hooliganism that has no place in soccer." The United States had an early lead on Tim Ream's set-piece goal, and held onto it for dear life despite being shorthanded. 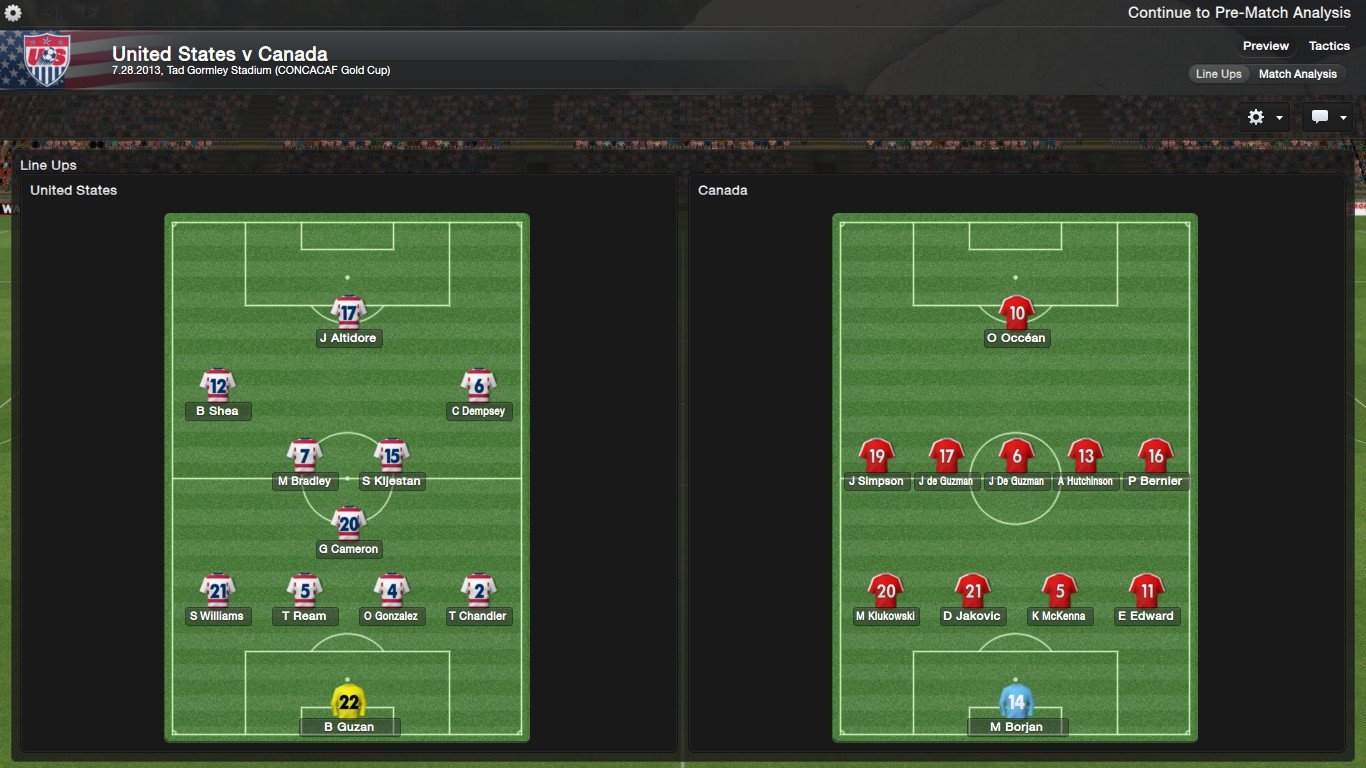 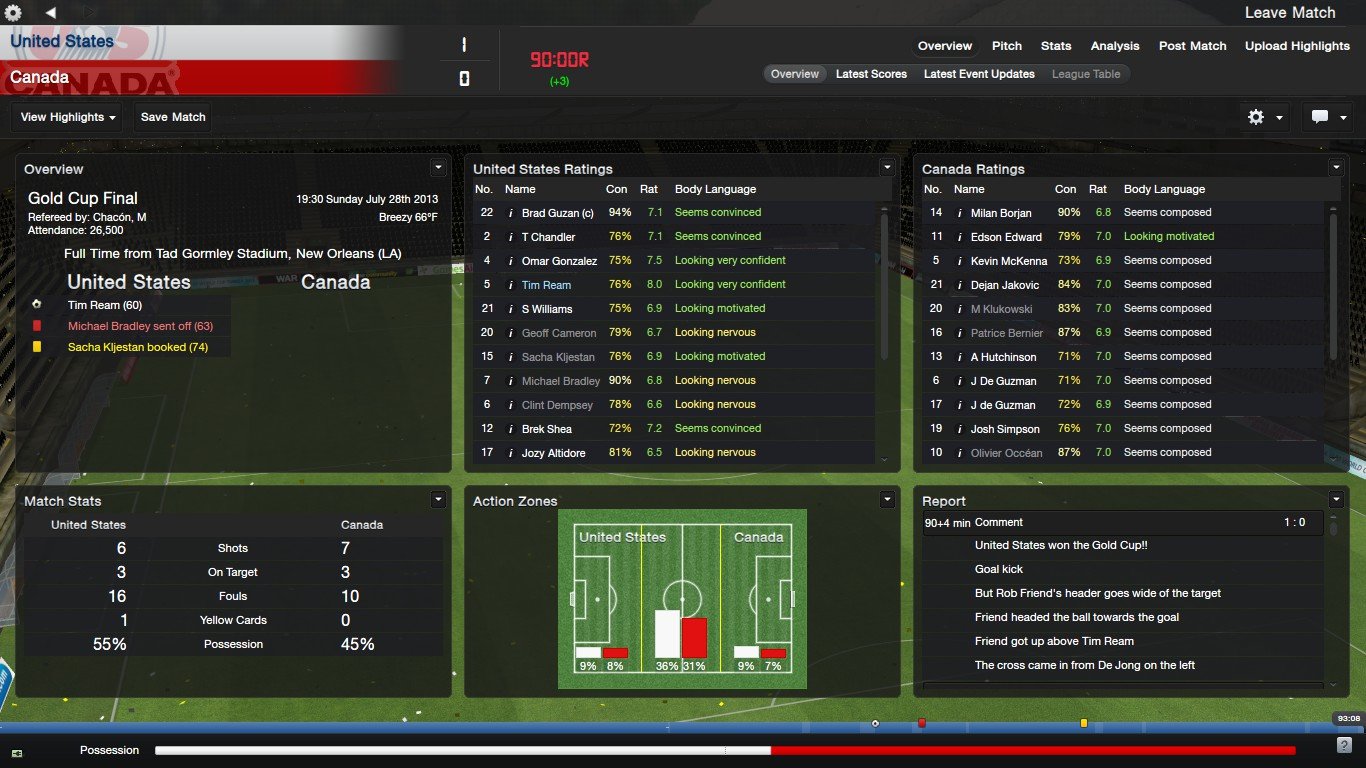 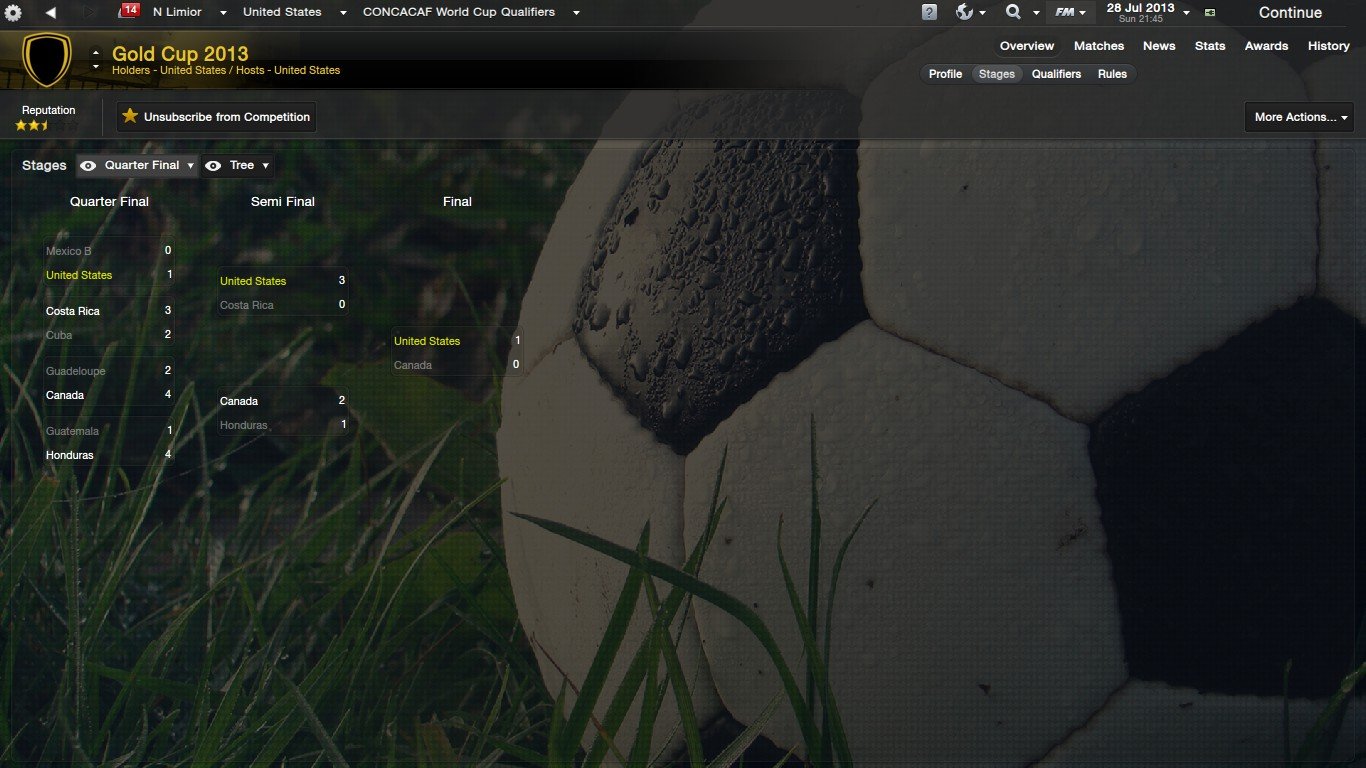 Bocanegra steps down as US captain

After the press frenzy died down, Carlos Bocanegra made his own announcement, that he was stepping down as US team captain. He would remain available for the team, but wanted to see someone younger take up that role. Nathan Limior responded by promoting Landon Donovan to captain and Brad Guzan to vice captain.

Here is the roster who will be traveling to Jamaica for the next World Cup qualifying match: 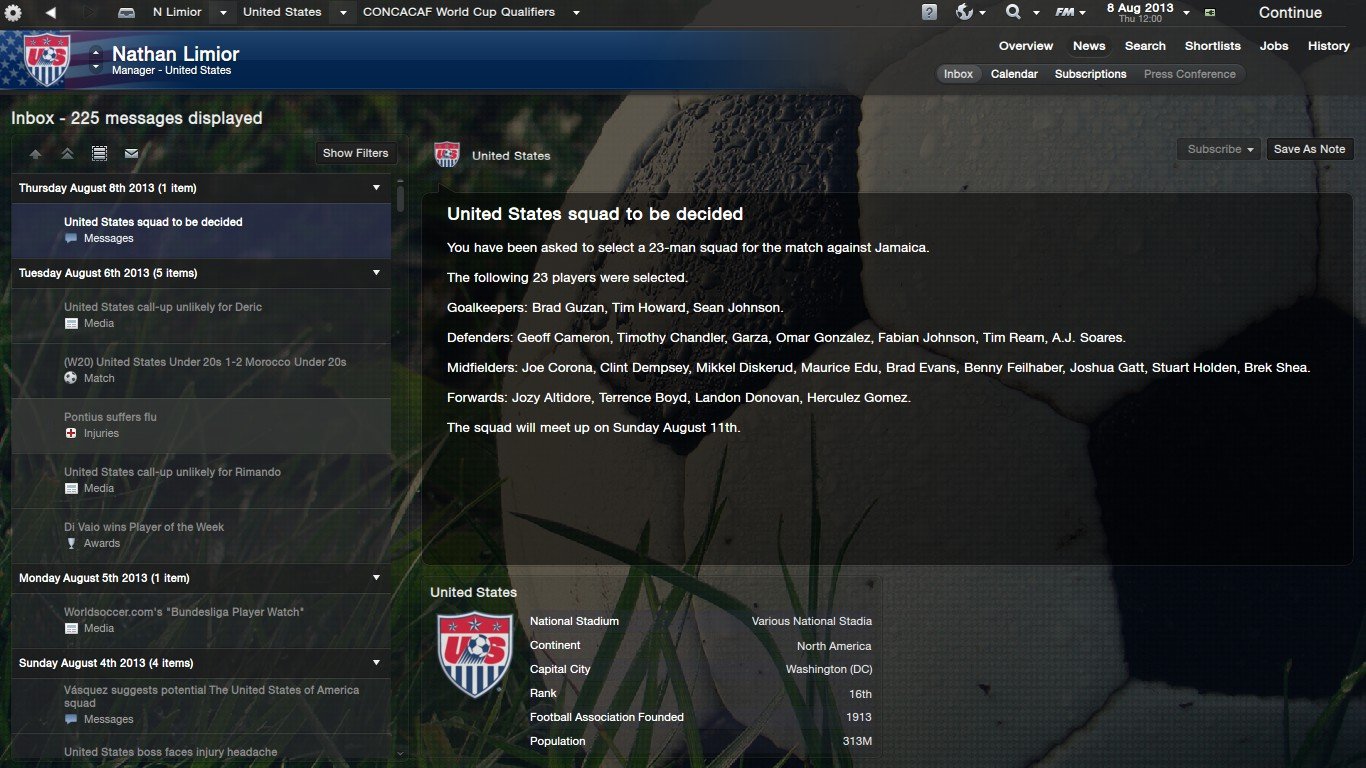 Notes:
- Chris Pontius was originally in over Herculez Gomez, but Pontius fell ill with the flu.
- The US will use a 4-2-3-1 against Jamaica, and there is more of a focus on attacking midfielders.
- Oguchi Onyewu is a notable absence, but his lack of pace will kill us against Jamaica.
- The media is complaining about the absences of Besler, Bedoya, and Jermaine Jones.
- BREAKING: Benny Feilhaber will miss the match due to injury, Jermaine Jones has been called up instead.
Login to Quote

The US confirms qualification!

The United States have ensured qualification for the 2014 World Cup after only six games after defeating Jamaica 2-0 in Kingston. With a set-piece goal from Omar Gonzalez and a lovely goal from Jozy Altidore where Landon Donovan had an incredible amount of choice with who to cross to as many American attackers packed the Jamaican box. Qualification was expected, but not this cushy, and the United States manager, Nathan Limior, will have to combat complacency and keep his squad in form in the run-up to the World Cup in 2014. 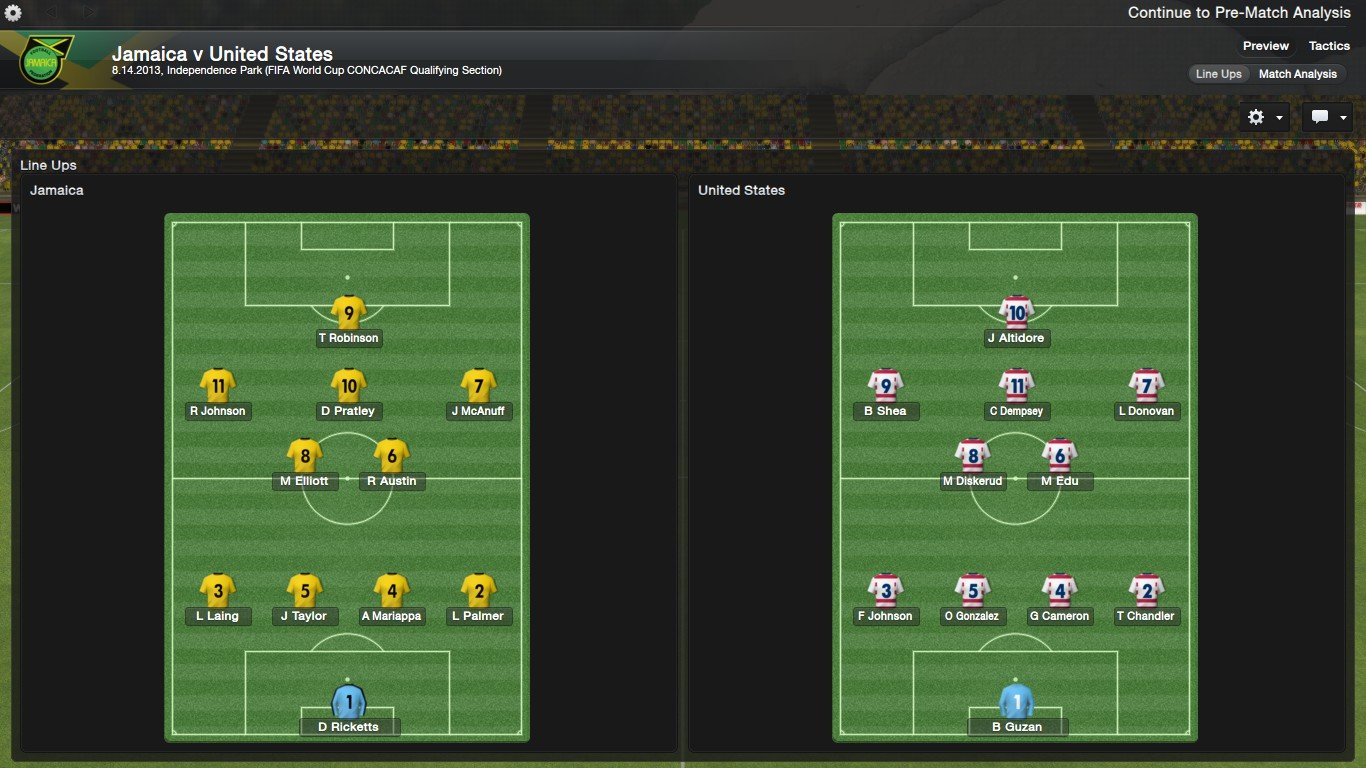 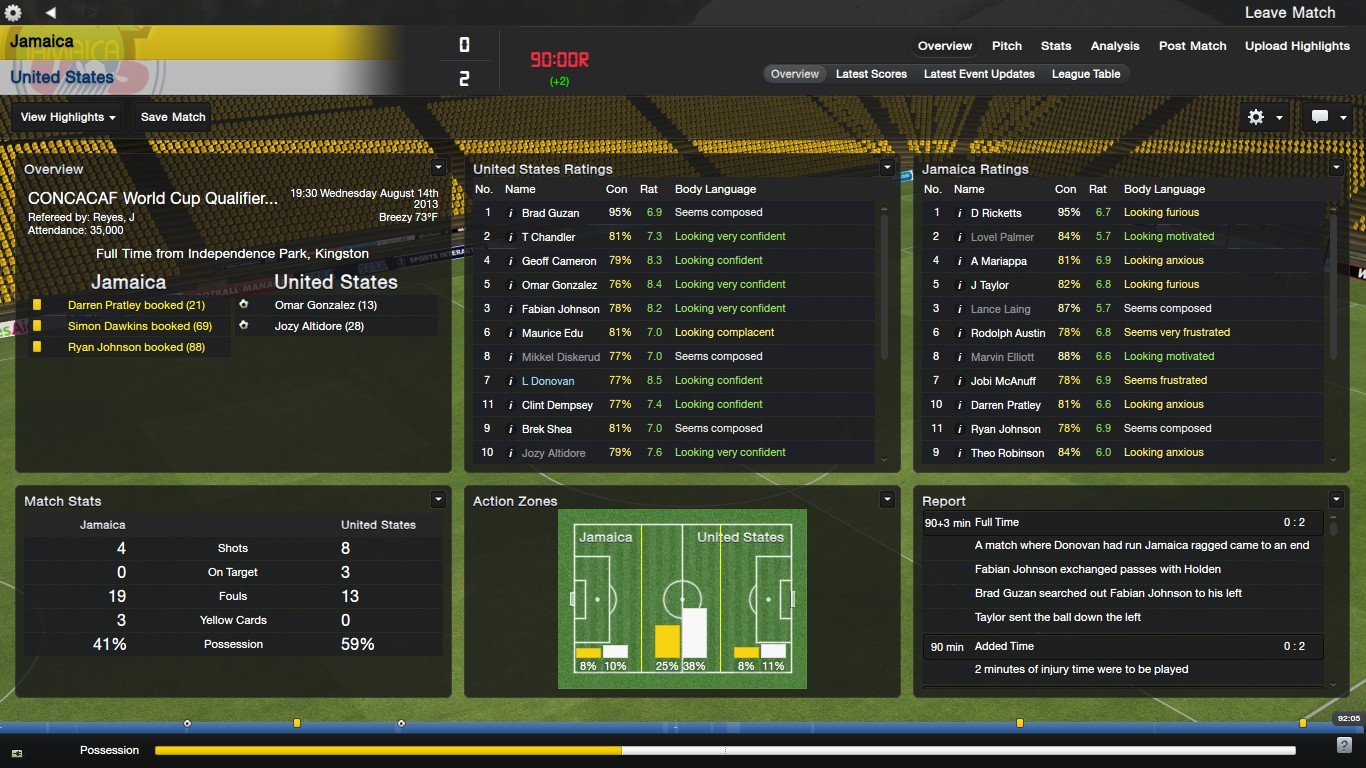 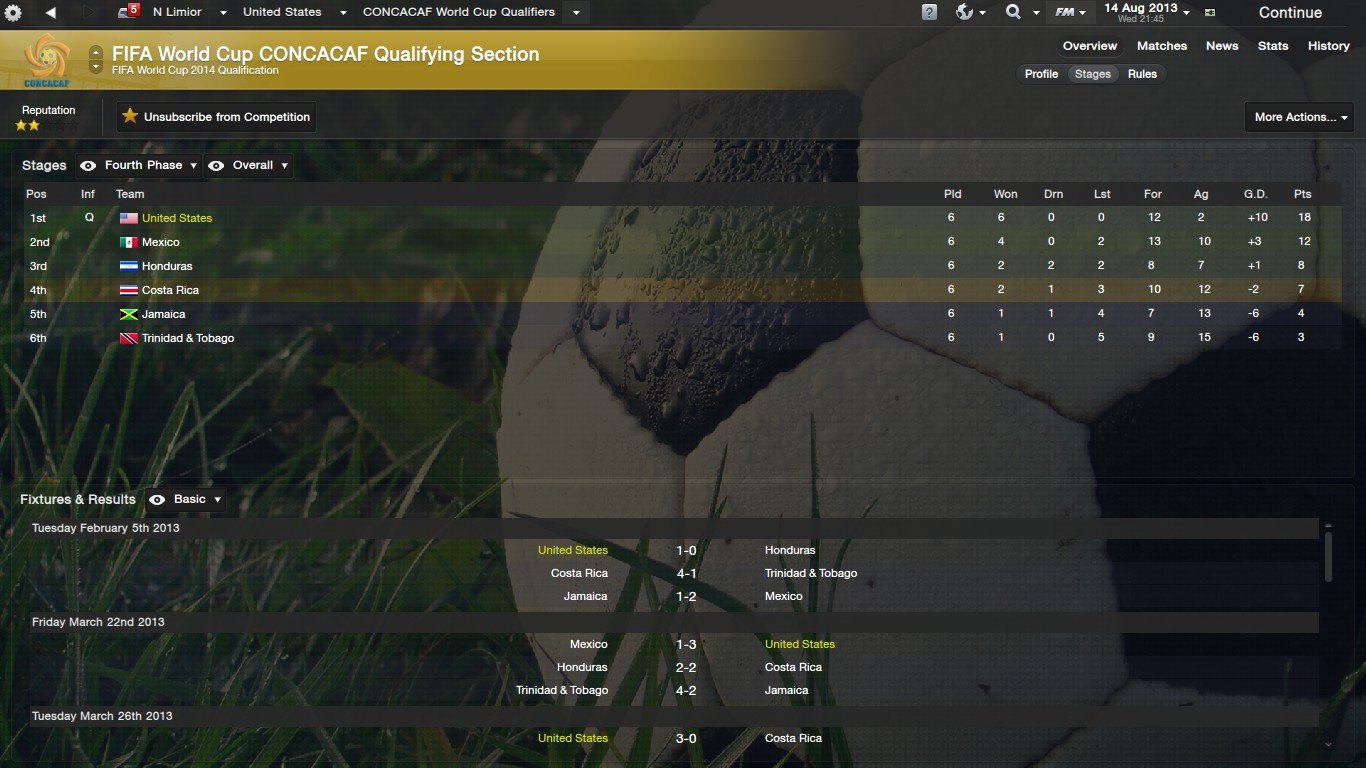 US Squad - Mexico and Costa Rica 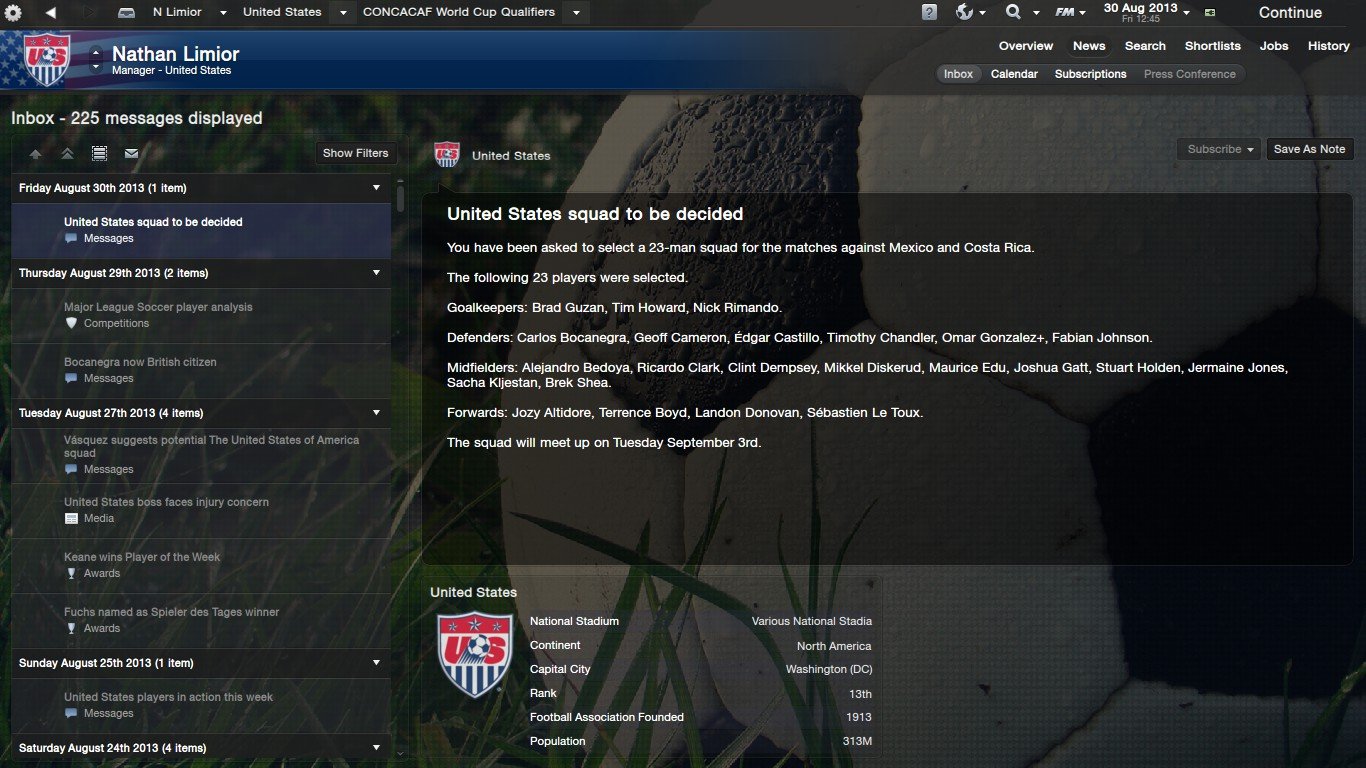 - Alejandro Bedoya, Edgar Castillo, and Ricardo Clark are reintroduced to the squad. I wanted to get some new faces in and test them against live fire, I am confident that they will be good in this team.
- The media is asking questions about Clint Dempsey's aging, but he is still a fine player and I will ride him until the wheels fall off
- Other clamored-for players by the media not included are Besler and Daniel Williams. They are fine players, but we can only shirt 23 players and having too many good players is a good problem for the US to have.

BREAKING UPDATE: Stuart Holden is injured and is forced to leave the squad. Daniel Williams will take his place.
Login to Quote

The update about Stu Holden reminds me of a question I've been wanting to ask, how is he doing for you?
1
Login to Quote

shylax
9 years
It's been hard for him to crack the lineup, but he has seen a little playing time. The center midfielder roles have been dominated by Bradley, Edu, Cameron, Kljestan, and Diskerud.
Login to Quote