Kiwi
9 years
Gentlemen, we can rebuild. We have the technology. We have the capability to make the world's first bionic football manager. Бранислав Боjaн will be that man. Better than they was before. Better...stronger...faster."

And I’ll need my bionic powers if I am going to work my way around the world, managing so named “Dynamo” teams, or any team who can be linked to power sources or generation.

Бранислав Боjaн is a Sunday League Football Manager Persona, who had been previously managing Dynamos in the South African PSL (within FM12).

I will give preference to managing teams named Dynamo, but being mindful of my relative reputation score and working my way up the ladder.

Dynamos were going to release Бранислав Боjaн at the end of the 14/15 season so that I could finalise my FM12 story and give readers a sense of continuity from FM12 to FM13.

In story context, Боjaн had been appointed “Technical Consultant” in December 2014, with a view to ousting the current management once his Dynamos contract had expired.

Circumstances (read poor performance of his predecessor) dictated that he stepped into the managerial position in April 2015 and managed part time until the Dynamos contract expired.

More will follow when I return home tonight, but for now….

“Hello, my name is Бранислав Боjaн, and I need to learn how to speak Czechoslovakian…..”
Login to Quote

Akash
9 years
Бранислав Боjaн, I'm Akash Vidyasagar. I don't think we have crossed paths before. Wish you luck with your adventure!
Login to Quote

Kiwi
9 years
Thank you Mr Vidayasagar, I don't think we have either....what are your plans for the future?

Oh, and my friends call me Dodgy Dave, but I might leave that until I know you a bit better....

Kiwi
9 years
And the question for ten points Glenn is what does Branislav Bojan translate to, or mean.

I set the name up when I was aiming to be a Serbian manager in one of the Serbian leagues. After spending too long unemployed, I landed in, well, South Africa.

Managing in the Czech Republic is not as easy as I thought it would be. Most of the players who I have scouted have either been interested but tied to a long term contract (read much compo payable), or coming to the end of a contract and not even remotely interested.

Thanks for your words of encouragement though!

Atreidas
9 years
A kiwi story :D, will be reading.
Login to Quote

Kiwi
9 years
Thanks Atreidas, it's great to know I can rely on the sense of community we have here. 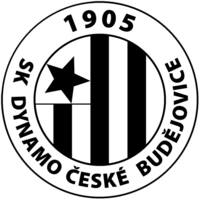 SK Dynamo Czech Budejovice South Bohemia is the largest club playing regularly the highest Czech Gambrinus League competition. In its more than a century of history, the club focuses on the education of young talented footballers.

This most famous football club raised Jiri Nemec and Karel Poborský, who were among the top players world-and in addition both donned the captain's armband and the Czech national team.

Since the establishment in 1905, the club has bounced between the first and second division, and has not been consistent in recently times. Боjaн will seek to change that.

The club plays its home games at the stadium on an island that although started operation in 1940, but after a complete renovation in 2003-2008 is one of the best stadiums in the Czech Republic. A great day for the island was 29th March 2011, where the qualifying match of European Championship between the Czech Republic and Liechtenstein was played.

In terms of youth academy prospects, there are none to speak of, and the club and corporate facilities are nothing spectacular and although it is perceived that the new coach is merely looking at SK Dynamo České Budějovice as a stepping stone, there are others who believe that he will be able to inspire them to achieve beyond their wildest dreams…. 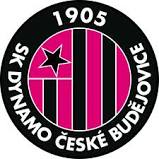 Atreidas
9 years
Wow! Can't wait for the next updates and see what your transfers are :), Go Kiwi!
Login to Quote

I approached my bosses in South Africa, I had accomplished all I could there, Dynamos were sitting pretty in the PSL, and I was comfortably ahead. It came as no shock to them that I wanted to take on another challenge part time whilst I saw the South African team to glory.

But I couldn't stand idly by and see get demoted, or run into financial ruin just as I was about to take the reins.

I needed to act now, rather than been the ambulance at the bottom of the cliff.

So despite being in the role for less than a year, the current manager was told to clear his desk. I was effectively the interim manager for the next two months until I was off contract. It appears no ones likes paying compensation!!!
Login to Quote

Kiwi
9 years
In taking over, we weren't placed to badly in on the league table, in seventh place, with seven games to play before the seasons end.

The danger however, was if I was to make a pigs breakfast and succeed in getting the team relegate. If that were to be the case, I am confident I too, would be told to clear my desk.
Login to Quote

Kiwi
9 years
Hey Atreidas, the transfers I have booked at the moment are great in my opinion, and while only one has arrived to date, I am confident that I will shape the team in my own image.

No, not Sunday League level!! Resourceful, resilient, professional and with a very strong with ethic.

It is also VERY difficult to get anyone really interested to come to the Czech Republic, and in a lot of ways, it is worse than South Africa!!

The danger however, was if I was to make a pigs breakfast and succeed in getting the team relegate. If that were to be the case, I am confident I too, would be told to clear my desk.

Good luck moving them up the table Kiwi

Kiwi
9 years
If we were to look into the future, you might see that with a couple of games left, I am running third, and that is still with a team who I would sell off for pennies at the local car boot given the opportunities.

Kiwi
9 years • Edited
The first thing my new Board did for me was to increase the scouting range so that there were no restrictions. 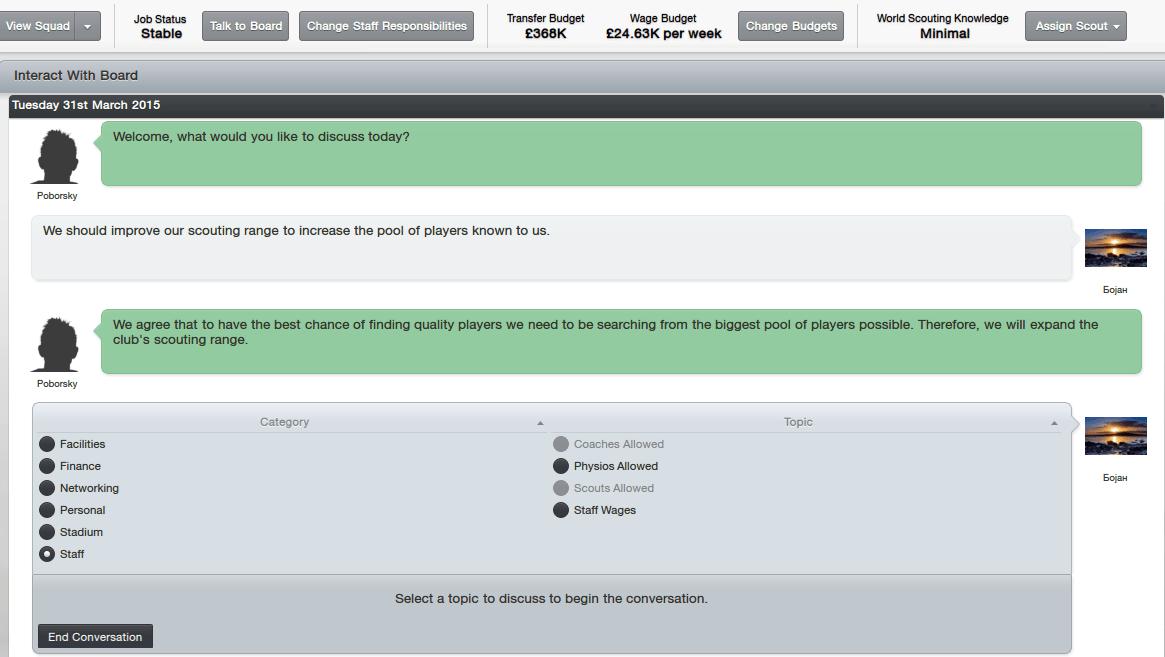 However, I needed to do something about the back room staff. The facilities I couldn't do much about at this stage, but the staff I certainly could.

After much negotiation, we ended up with a better back room, with training stars of between three and four stars. We had also built up our scouting knowledge to broad. 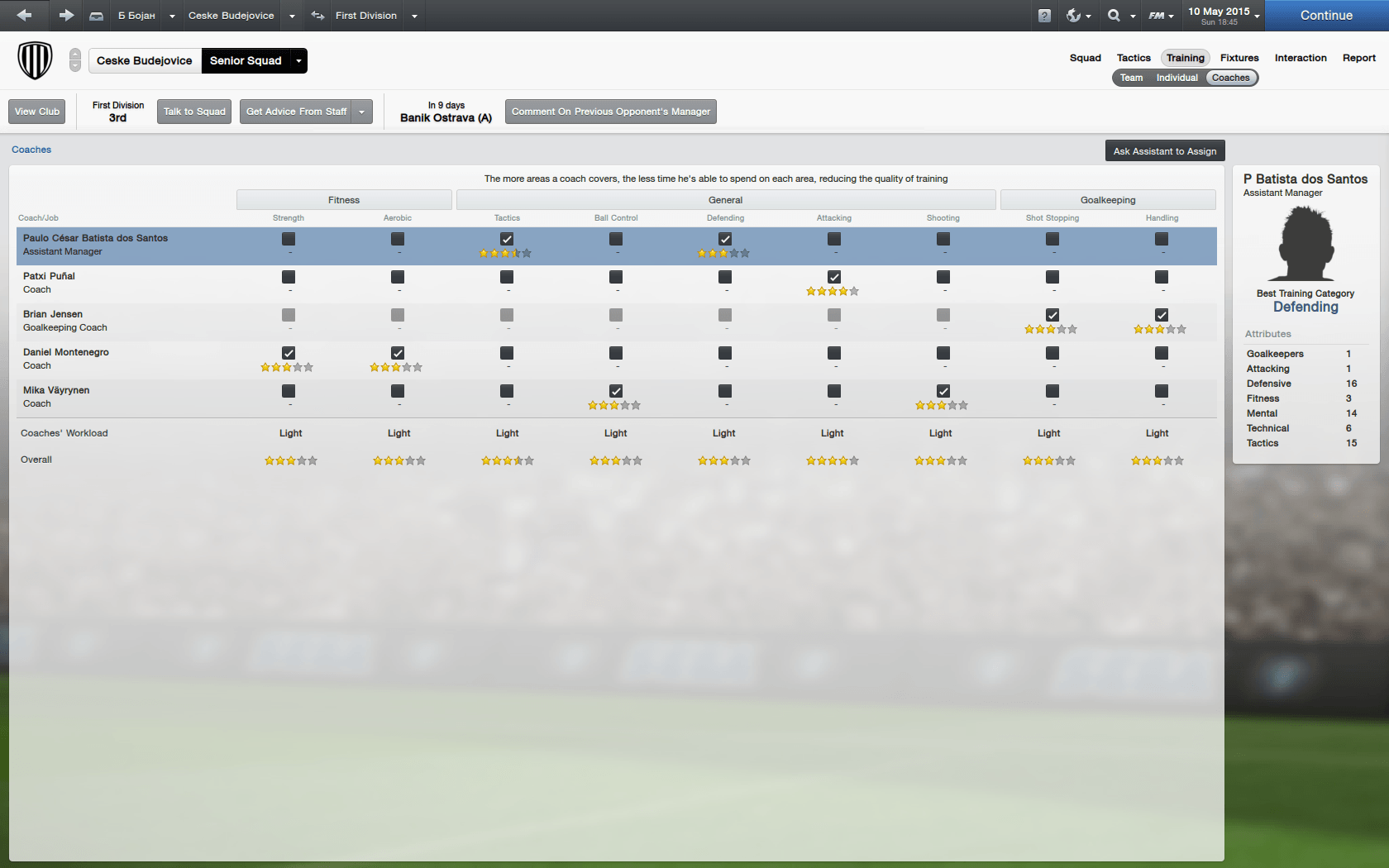 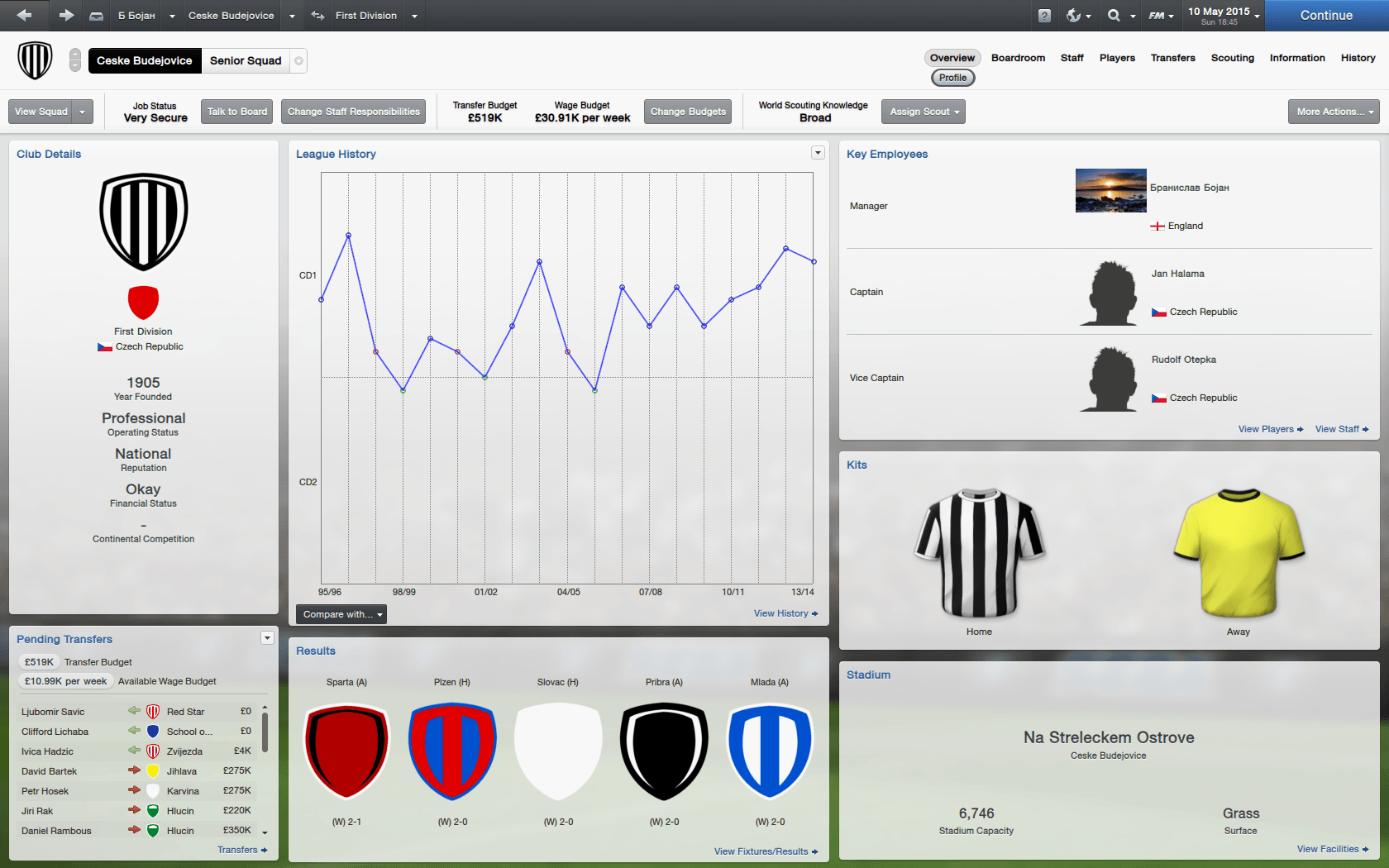