Gashead
9 years
Bristol Rovers beat you, can't say I feel bad for you.

You can get promotion, come on Vauxhall!
1


Thanks guys, I have a good feeling about this season!

Ferguson: He Has Potential 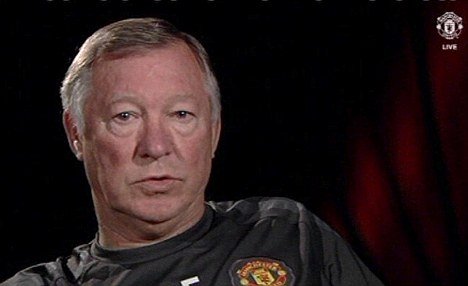 "I have been a football manager for forty years before I retired. I would like to think that I have been successful as a manager and that I have left some sort of legacy. I have experienced a lot as a manager, but I have not been able to accomplish the feat that Paul Hewson, or Bono, has accomplished.

There have been plenty of moments when my teams have come back to win dramatically but nothing compares to what he did in 2014. Vauxhall Motors is only a wee club and they were playing in the Blue Square Premier, I think that's what it's called. They were right down at the bottom half-way through the season. But Paul Hewson didn't give up. He rejected the offers that he got from other clubs in much better decisions, and he did the impossible. He rescued the club from relegation and then the next season, he got the promoted to the League Two. Since then, he has improved the stature of the club and now they are challenging for the title!

He has potential as a manager, and he has proved that. What he did with Vauxhall was like a phoenix rising from the ashes. He didn't just rescue the club, he is bringing them all the way to the top. I am now retired as a manager so I cannot have the honour of playing such a remarkable manager. But I am an ambassador for Manchester United and I cannot wait for the day when wee Vauxhall Motors are in the Premier League, and they visit Old Trafford. That will be a day to remember for the world of football. He deserves it all!"
Login to Quote

Louis O.
9 years
Fergie won't have to wait long if he wants Vauxhall in the Prem, although he'll probably be dead by then

A wee club in the big leagues

You never know with Fergie, he'll probably have his brain transplanted in to a machine!
Login to Quote

Blue
9 years
Nice update, I just wish it could have come from a trustable source! Like Joey Barton and so on

I don't know, it's hard to understand a French person


It's the start of a new year, and hopefully the start of a successful year for Vauxhall Motors FC. Looking like strong title challengers coming in to the calender change, Paul Hewson's men were looking to take their games advantage and climb to the top.

We started off very well with a vital win over the league leaders, Rotherham. We then dropped points in a goal-less draw against Fleetwood but bounced back with a win over Oldham. We drew with Grimsby before gaining sneaky wins over Burton and Northampton. Southend did hold us to a draw but we proved more powerful than AFC Wimbledon in a 3-2 win. With Euan Smith finally back from injury, he and Obi Anoruo have been firing in the goals for fun. Zac Fagan and Nat Kerr have been as reliable as ever in defence, helping us to four clean sheets this month. My only problem is that I cannot seem to find two reliable wide midfielders. That is where we are struggling at the minute. 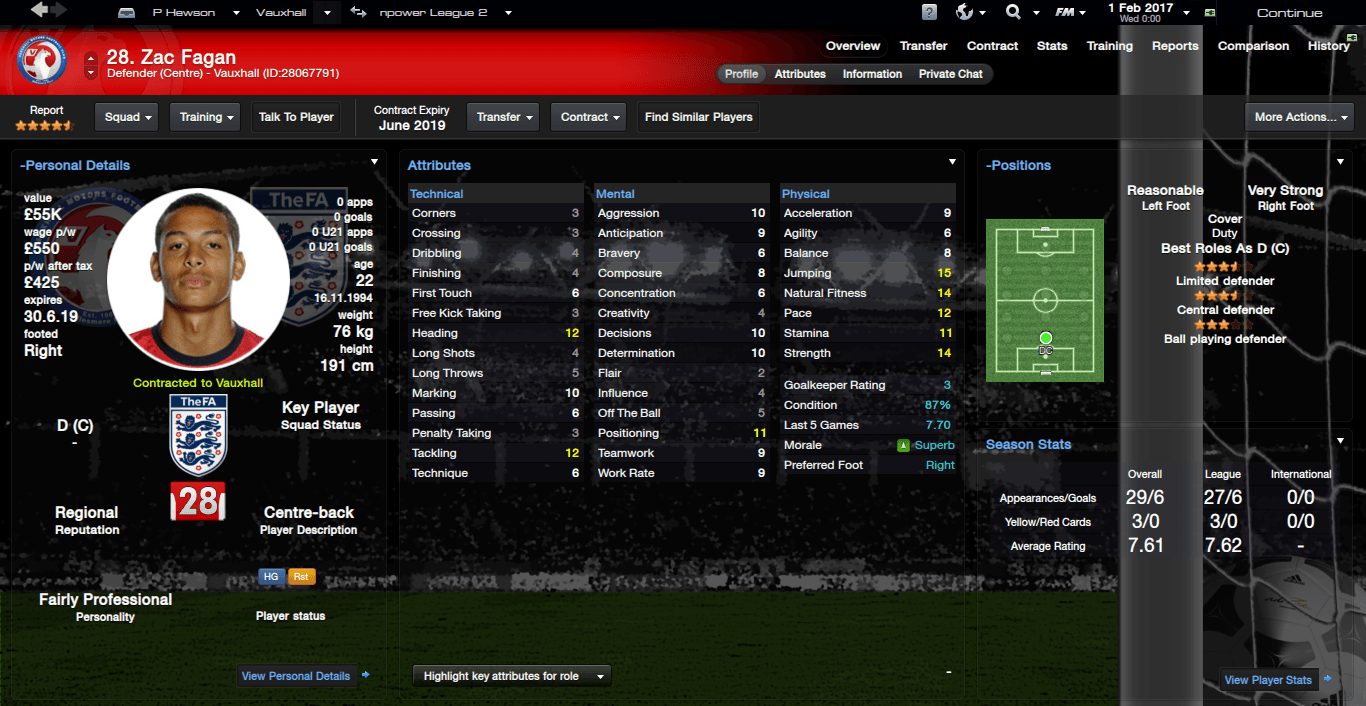 Zac Fagan is my player of the month, for a second time this season. He has been a brick wall in defence, helping us to four clean sheets this month. He has also helped us on the goals front, scoring three goals to help us to some vital wins. He has been an amazing signing for us and he will be a stalwart in our defence for years to come. He deservedly won the NPower League Two Player of the Month award. 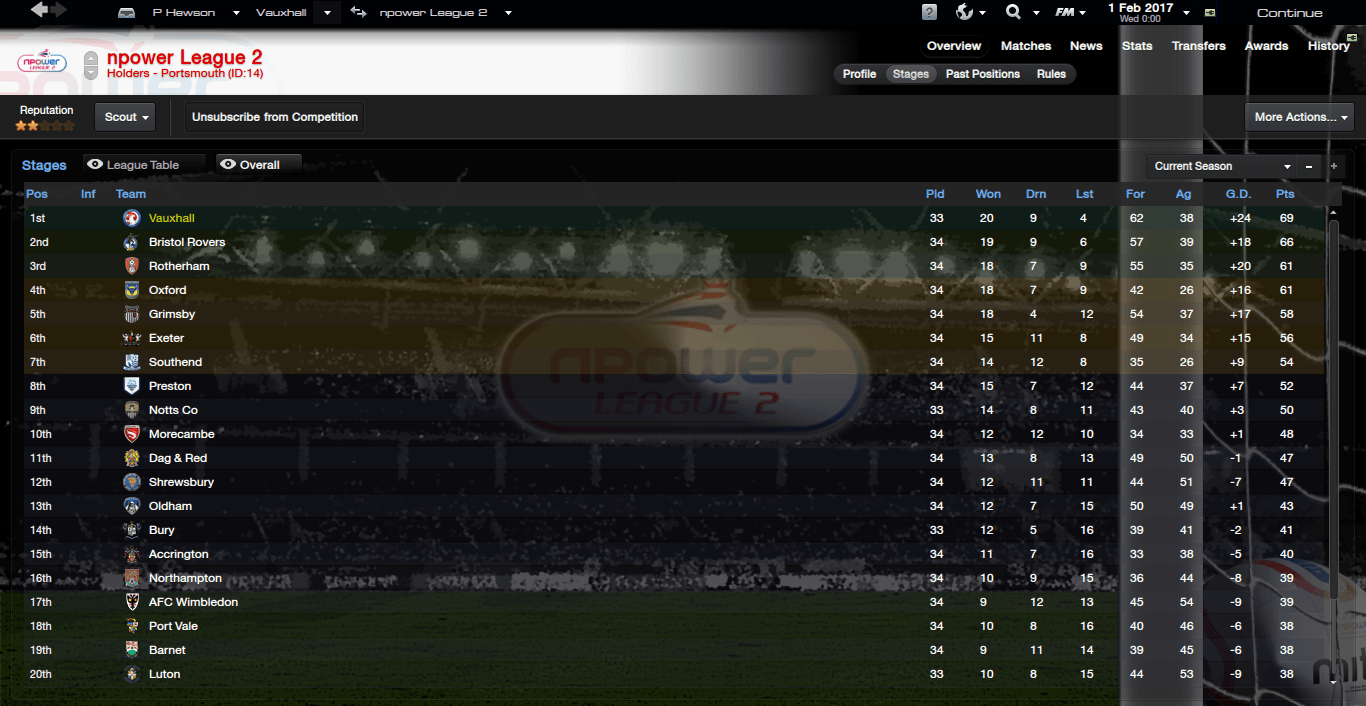 We have miraculously climbed to the top of the league table! We have overtaken Bristol Rovers and Rotherham and we have a three point cushion at the top. We also have a game in hand, too. We are the top goal scoring team in the league, with sixty-two goals. Our goals conceded record is improving, compared to others. We have a very good goal difference, which we are looking to improve even further.

We have four games next month, with three of them being away from home. Hopefully we can secure our place at the top of the table with some emphatic wins and push for the league title.
Login to Quote

Louis O.
9 years
Brilliant work, think you can stay on top for the rest of the season?
1
Login to Quote

AlexSonwild
9 years
He will stay at the top!
Nice month Justice

Toon
9 years
Promotion confirmed, then. Focus on preparing for League 1, you'll have to make some changes if you want a good finish in your first season there.
1
Login to Quote