Blue
9 years
You lost to Wednesday

things will improve though

BFC_Michael
9 years
Just read through all this and all I can say is...rather you than me!

Justice
9 years
Thanks guys, I hope that we can play well this season

Toon
9 years
Good luck mate, had a rough patch but nothing that ol' Bono can't fix.
Login to Quote


After a jittery start to the season, we were looking to settle down our form. I knew that some decent results would set us on our way to a top-half finish. This is how we performed:

We performed magnificently! Five wins and two draws from seven games is more than I could have ever hoped for! We made our home a fortress, winning all every game at the Vauxhall Stadium. We drew two of our three away games but they are still good points on the board, as far as I'm concerned. Our goal scoring form has been superb, with Anoruo scoring seven goals this month, and Euan Smith scoring three. We have become a formidable side and I'm delighted to have won the manager of the month award. 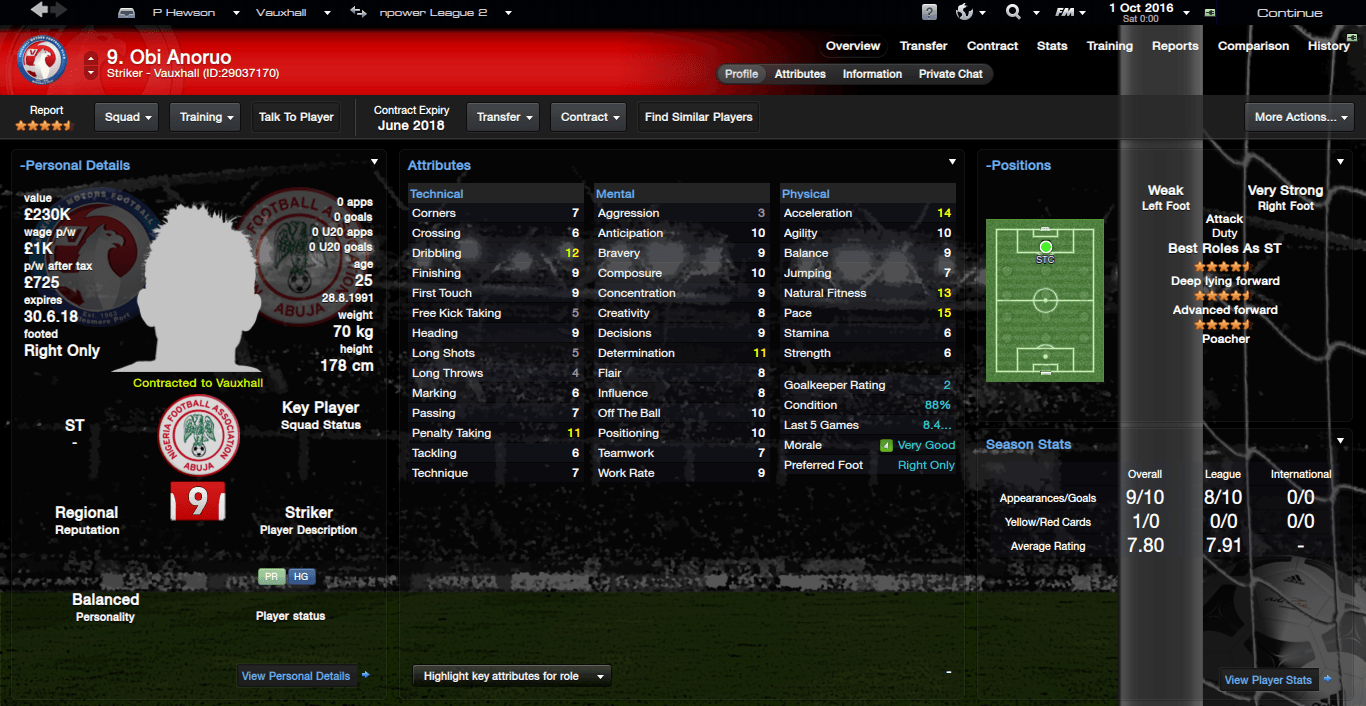 Obi Anoruo is my player of the month, after scoring seven goals in seven games. He has been in phenomenal form this month and deserves the award. This month was a very important month for him as he scored his 100th league goal for Vauxhall Motors, aswell as breaking the record for the most league appearances in a Vauxhall shirt. He is a true hero, and he deservedly won the NPower League 2 Player of the Month award. We have rapidly climbed up the league table and we are now in third place, which is an automatic promotion spot. We are the league's top goal scoring team with a very impressive tally of twenty-four goals. We have conceded a considerable amount more than the teams around us, which is not great but I am delighted with out progress this month. Hopefully we can keep pushing onwards and upwards! 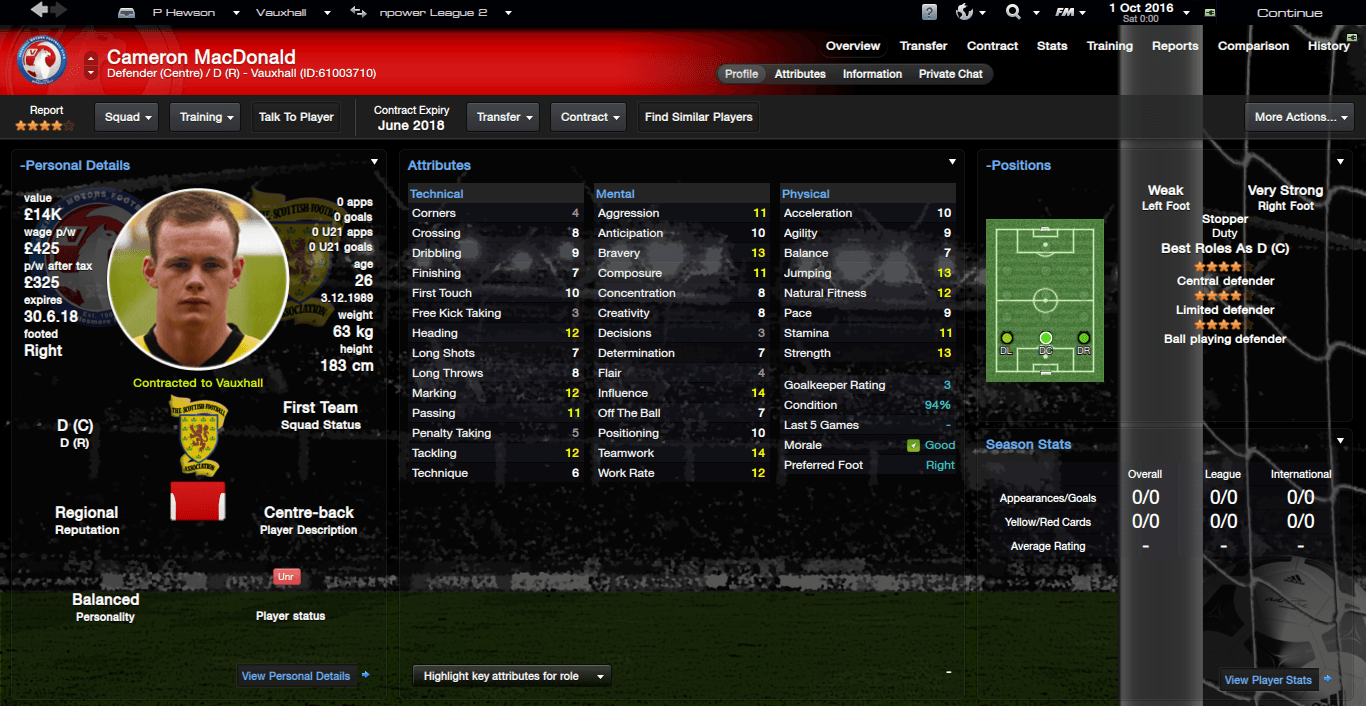 Cameron MacDonald is a Glaswegian central defender signed for rotation purposes. He possesses great defensive and aerial abilities and he is a very brave and influential character. He will be a huge plus for us and we will be relying on him on occasion to keep cleansheets. Hopefully he will be worth his wages.

We have six tough fixtures for next month. We start off with a very tricky away game against Mansfield, where I will be hoping to lay down our promotion claims with a win. If we can start positively, I reckon that we can continue on and end positively. Hopefully we can have another good month.
Login to Quote

Neal
9 years
Great results this month, keep this up promotion looks a certainty

Thanks Neal, promotion would be amazing 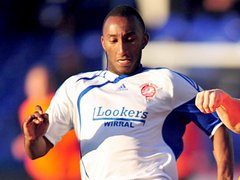 Obi Anoruo has been the man-on-form in the NPower League Two, and the league's leading goalscorer has broken two big records at Vauxhall Motors recently. The first record that he broke was to be the first Vauxhall player to bag 100 league goals, and he did so with a a very decisive penalty against Rotherham at the New York Stadium. He has since scored an incredible tally of nine league goals in five games and has earned the NPower League Two September Player of the Month award for his efforts.

The second record that he broke this month was Vauxhall's total league appearances record. The record had previously been set at 204 by team-mate Tom Hannigan but Obi Anoruo has been a big part of Paul Hewson's team and has broken that record. He is now Vauxhall's record league scorer and holds the record for most league appearances too.

With Vauxhall Motors currently in third place, a lot higher than they were expected to be, Obi Anoruo will be a massive part of the team this season and he is a trusty striker to rely on!

Jer
9 years
Great update. Anoruo is pretty much like frickin' Messi for you! Breaking records and scoring goals! Heheh! Good update mate! You can make it to the Premier League with this guy!
1
Login to Quote

k1rups
9 years
Awesome stuff love the way you write your stuff and Anoruo is smashing it for you! long may it continue haha
1
Login to Quote

Jack
9 years
Get in there Justice! Great month and it's definitely gonna improve from here
1
Login to Quote

2013-04-28 02:15#95729 PaukerJ : Great update. Anoruo is pretty much like frickin' Messi for you! Breaking records and scoring goals! Heheh! Good update mate! You can make it to the Premier League with this guy!


If only I had Messi!

Yeah, he seems to just keep getting better and better!


Thank you very much for reading and yes, Anoruo is an animal!


He is now 25 years old. Here is a screenie of his history: wellsy1498
9 years
keep it going mate realy enjoying this still. Hope you can take them to the prem.
1
Login to Quote