You are Michael Smith?


Last season was a spectacular season for us, winning the NPower League Two title after a very dramatic season. With great memories to savor and great ambitions, we were looking forward to what would hopefully be a very good season in NPower League One for us. The pre-season will be key for us as we look to improve the squad, improve our finances and to get the players match fit before the start of the season.

We played seven friendlies against seven much tougher teams. The reason we played these teams was to improve our finances with ticket sales. I also rotated my squad a lot to make sure everybody was match fit come the start of the season. We were beaten, as expected, six times but we somehow managed a surprise win at Villa Park. As per usual, Obi Anoruo proved to be our star player in pre-season. I'm looking forward to another spectacular season from him!

This was a very busy summer for us in the transfer market, as we released eight players and loaned out two more. We did bring in eleven players, however, with two of them coming in on loan. We do have another player signing for Vauxhall in August, but I will keep his identity a secret.

Keith Buckley is a well-developed Irish center midfielder who hails from Dublin. He is the complete midfielder, not lacking anything for any midfield role. Being my first ever money transfer, there will be huge expectations on his shoulders, but I back him to perform. 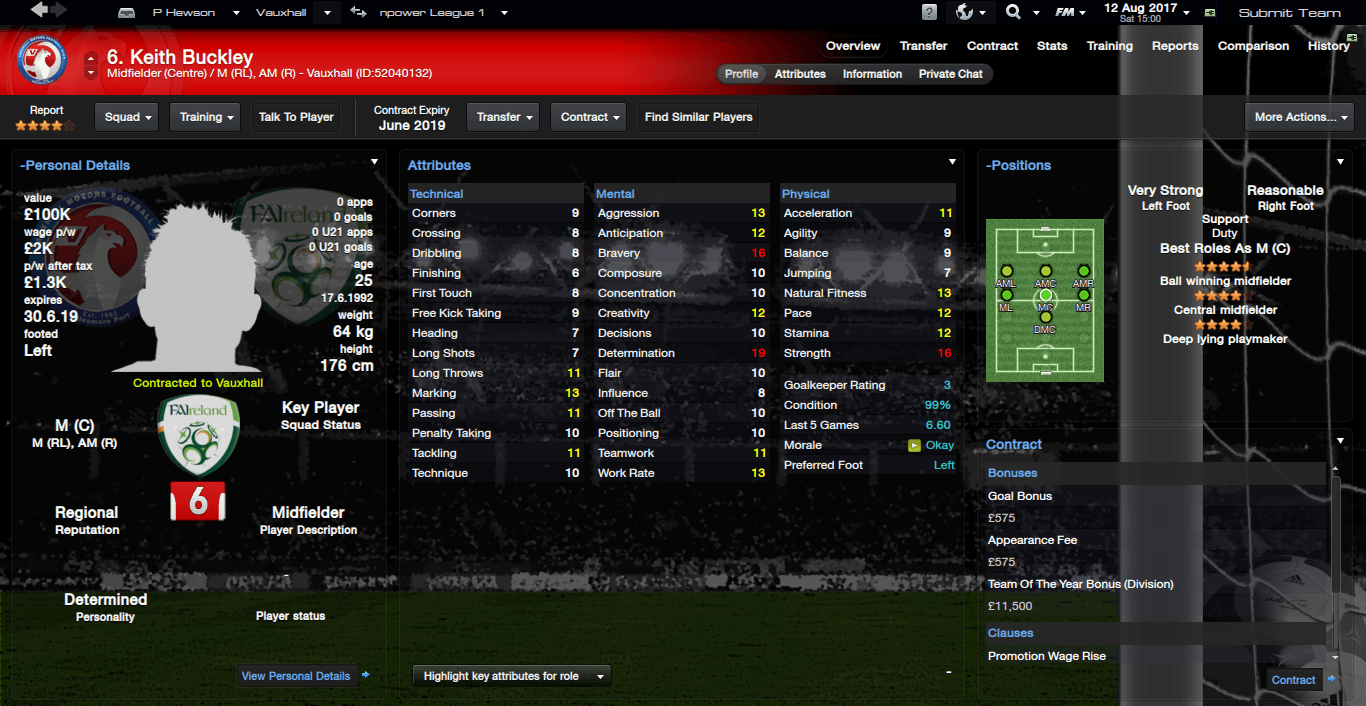 James Fry is a young, English full-back signed from Birmingham on a free transfer. He is a very tough, hard-tackling player who will hopefully fit in to the team very well. He is known for his determination to succeed and his willingness to put his body on the line to win. 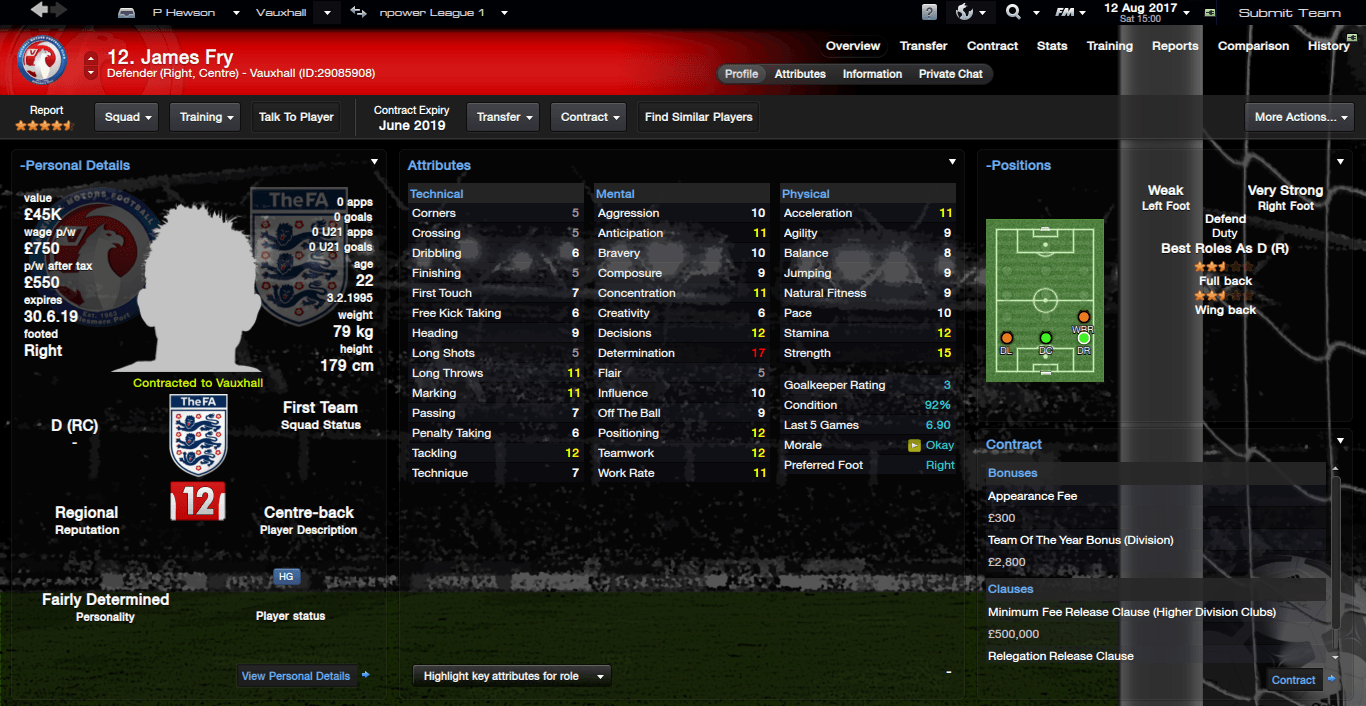 Will Beesley is another young, English full-back, whom we signed from Blackburn Rovers. He is very pacey and is good on the ball. He will be blazing up the left wing this season, as he is very attack minded. Do not be fooled by his height, as he will prove to be a very steely defender to play against. Josh Sheehan is a young, Welsh center midfielder signed on a free transfer from Swansea City. He possesses great pace and is a joy to watch on the ball. He is very Spanish in the way he plays football, as he will look to make the link-up play happen, rather than the common "British style" of forcing the ball in to the back of the net. This guy will be a big player for us this season. 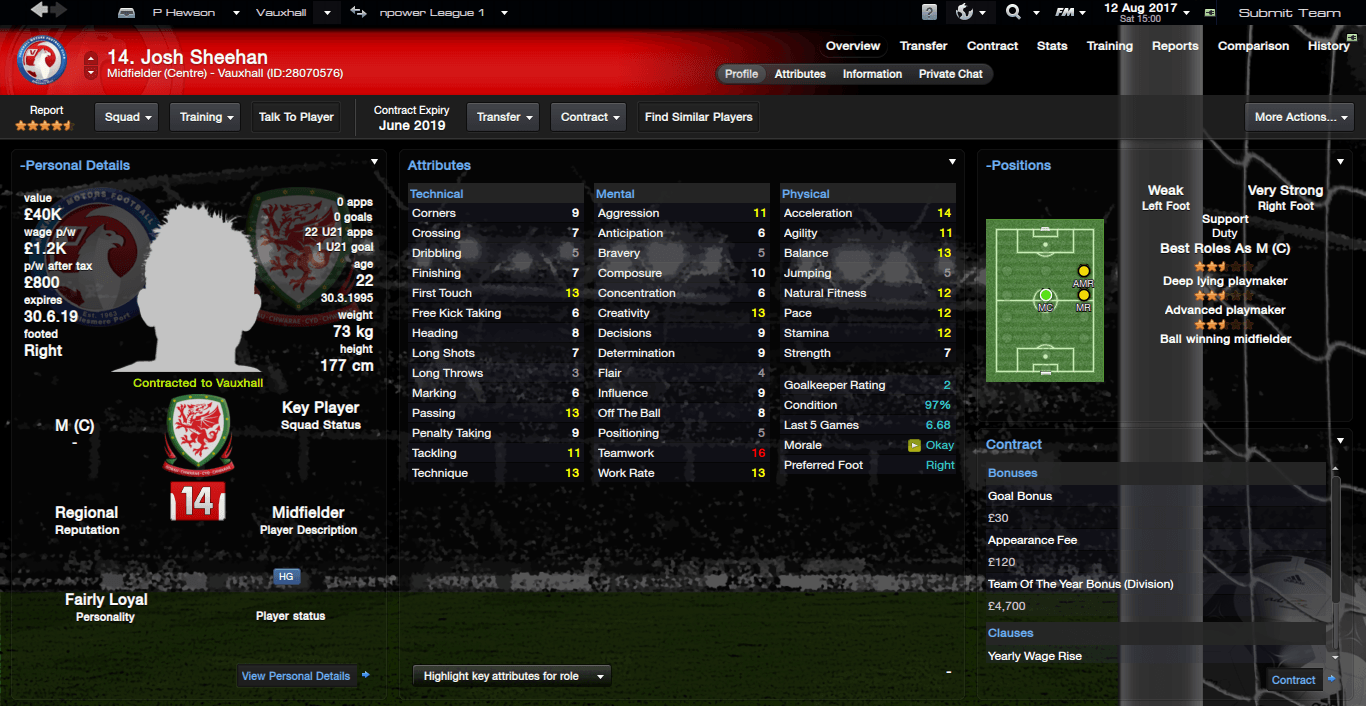 Leigh Bedwell is a young, English goalkeeper signed on a free transfer from Swindon Town. He is a very well-balanced goalkeeper and he will certainly be called upon to make some top saves this season. 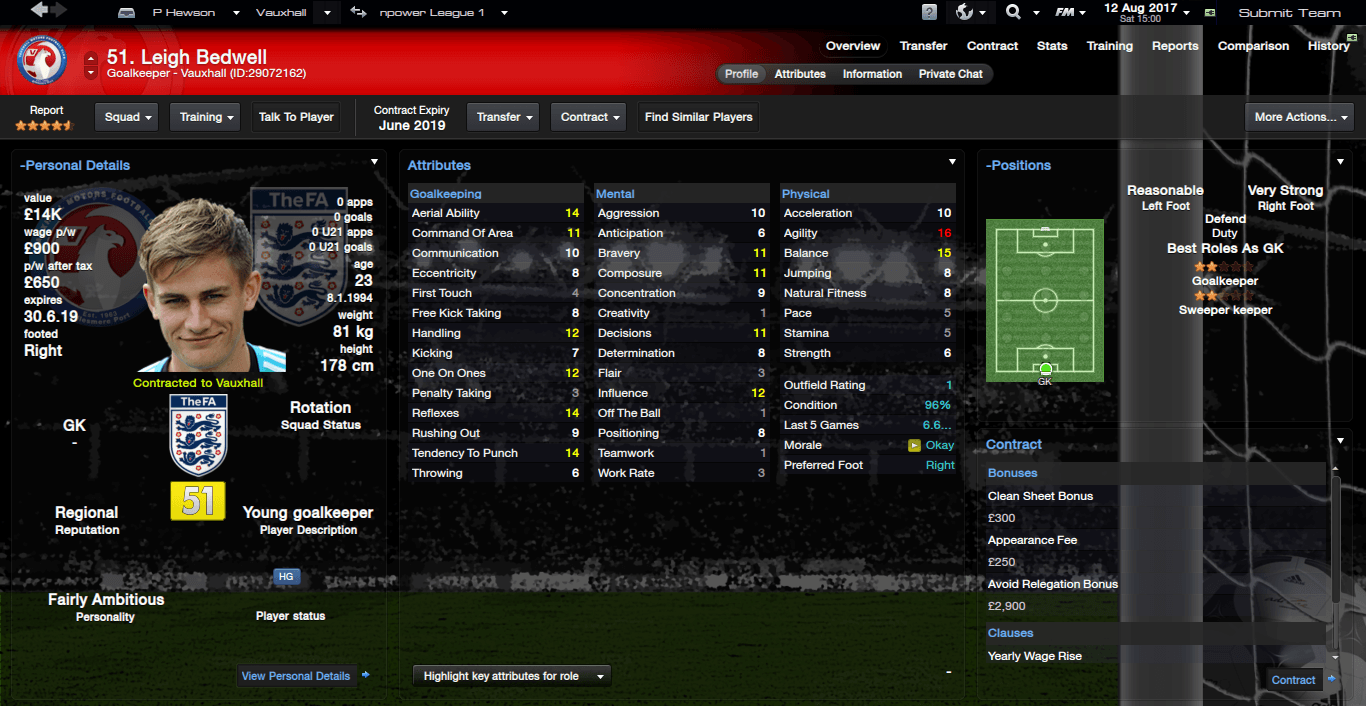 Grant Anderson is an experienced Scottish wide midfielder who was signed on a free transfer. He is very pacey, is a good dribbler and possesses a good cross. He will be a good rotation option for the team. 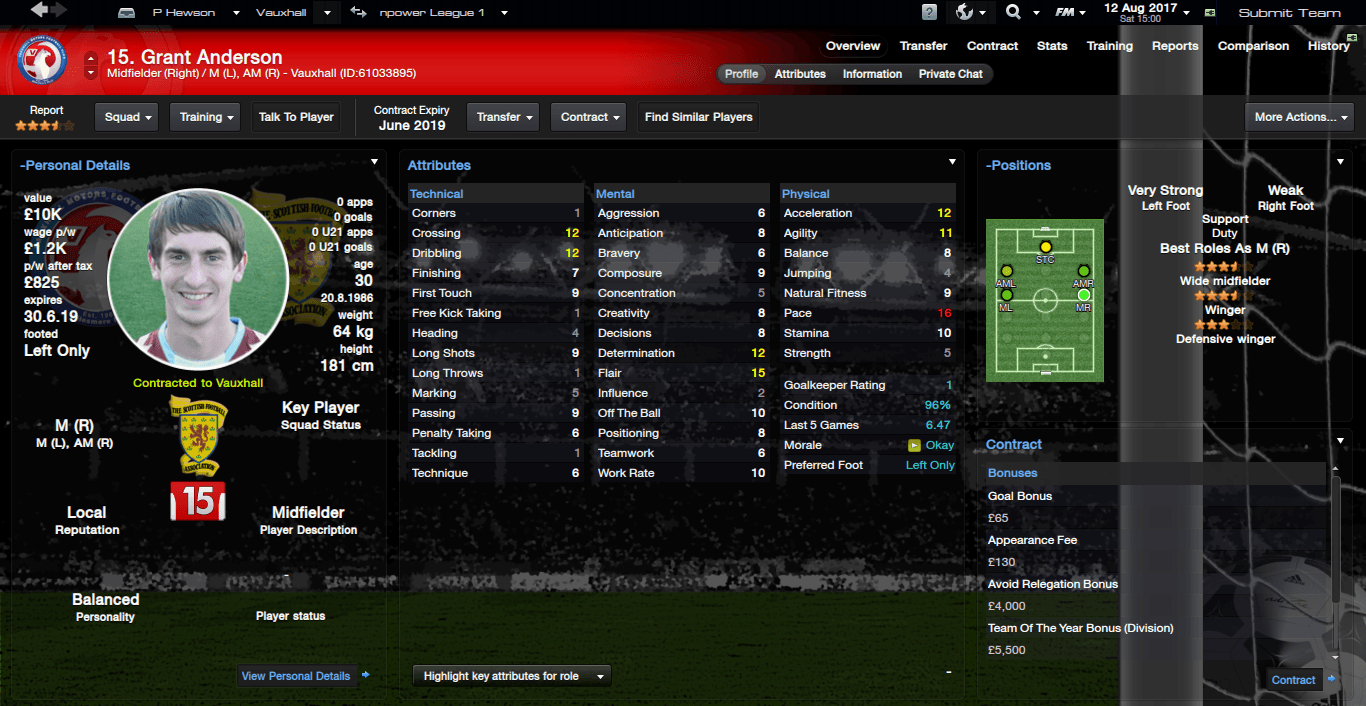 David Omoboye is a young English striker signed on a season-long loan from Blackburn Rovers. He is a very pacey and very skillful forward who will provide good cover for Anoruo and Smith. 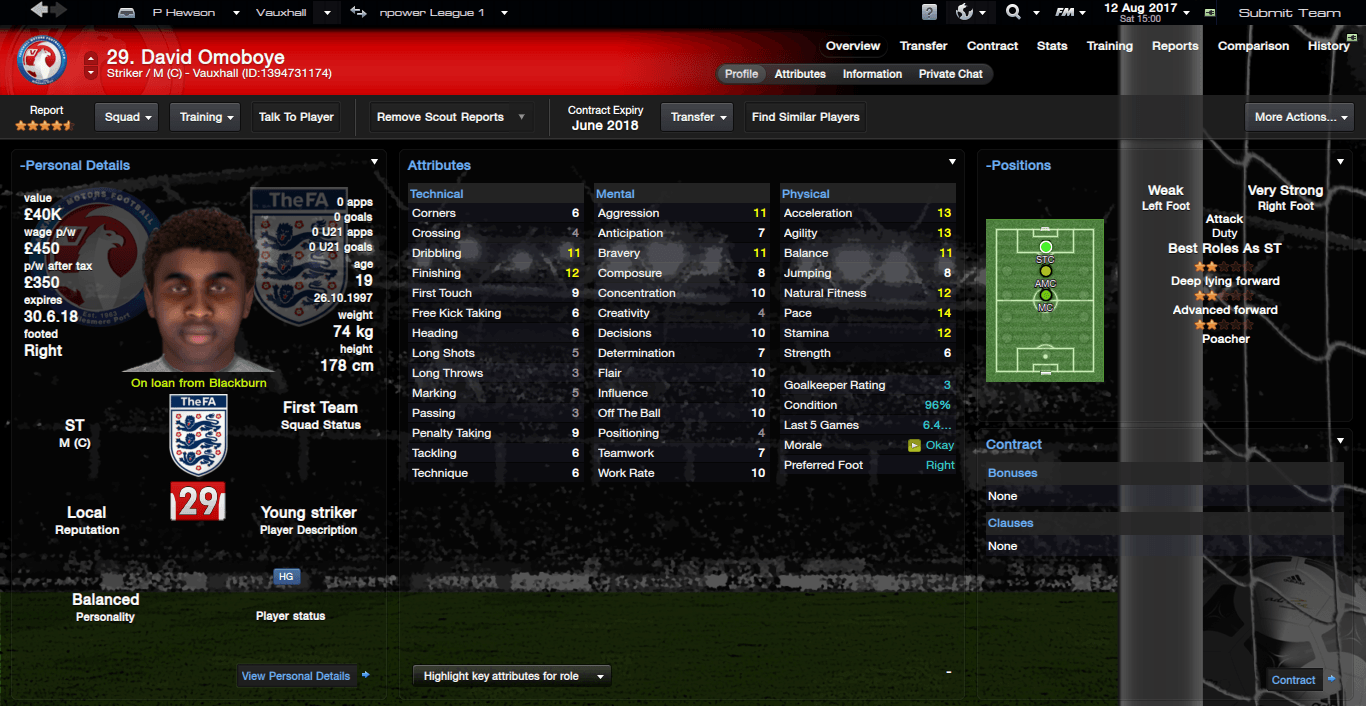 Craig Duguid is a young Scottish left-back who was signed for £6,000 from Scottish club Aberdeen. He is very balanced physically and is very good mentally too. His technical stats aren't the greatest but he will do a good job in defence for us. 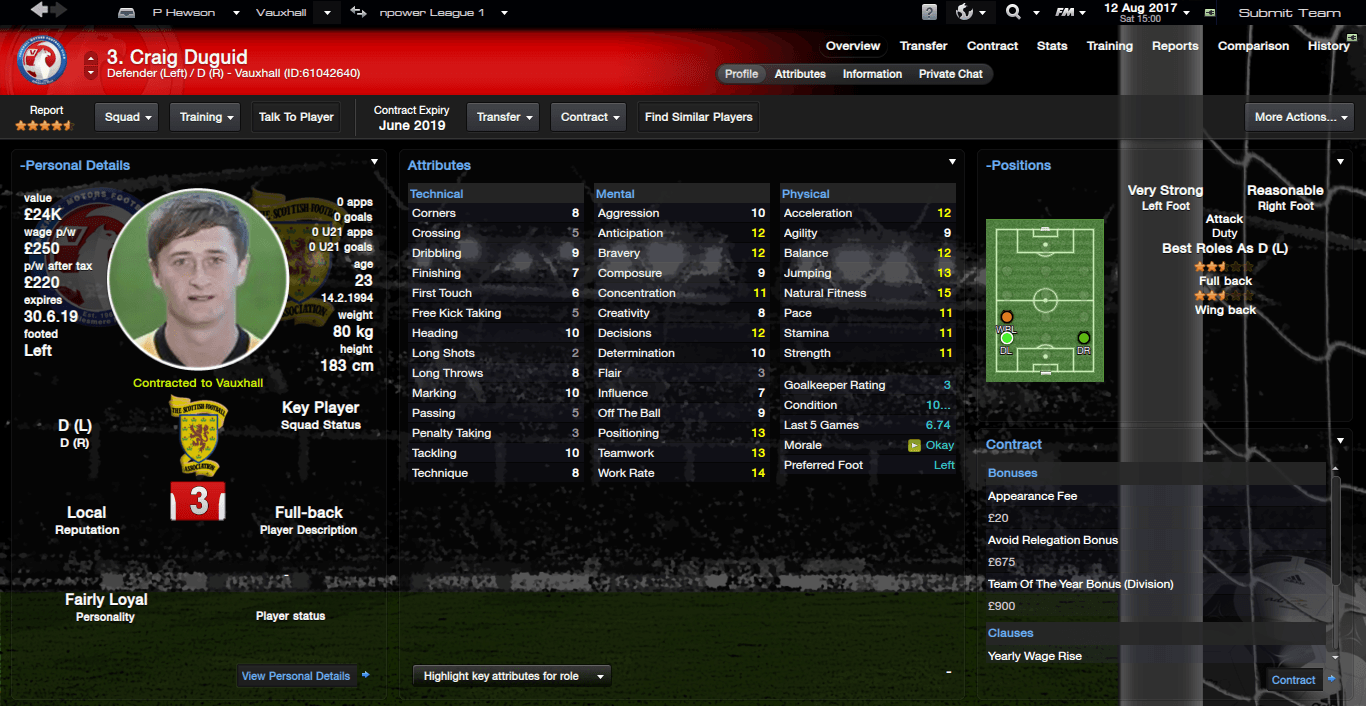 Julian Willis is a young, English central defender signed on a season-long loan from Middlesbrough. His fitness is great and he is a monster in the air. He will be good back-up for Kerr and MacDonald, and maybe he can even challenge for a starting role. 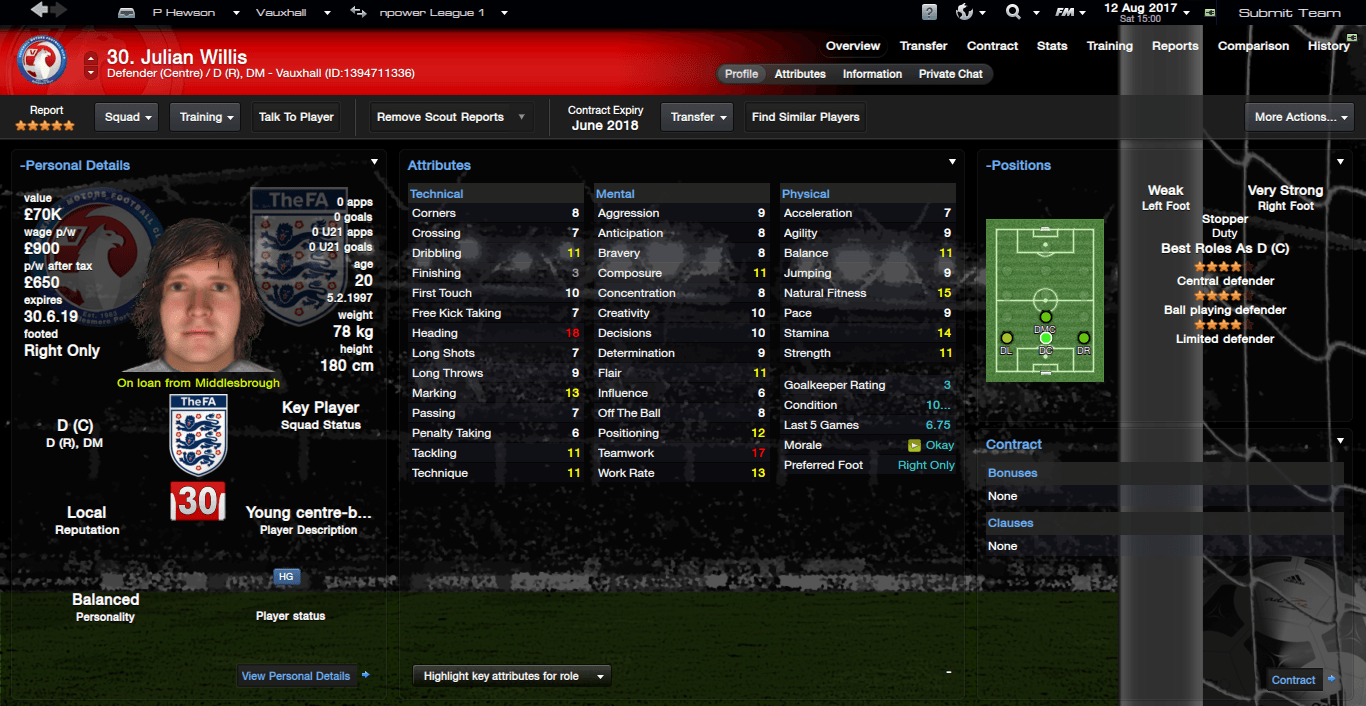 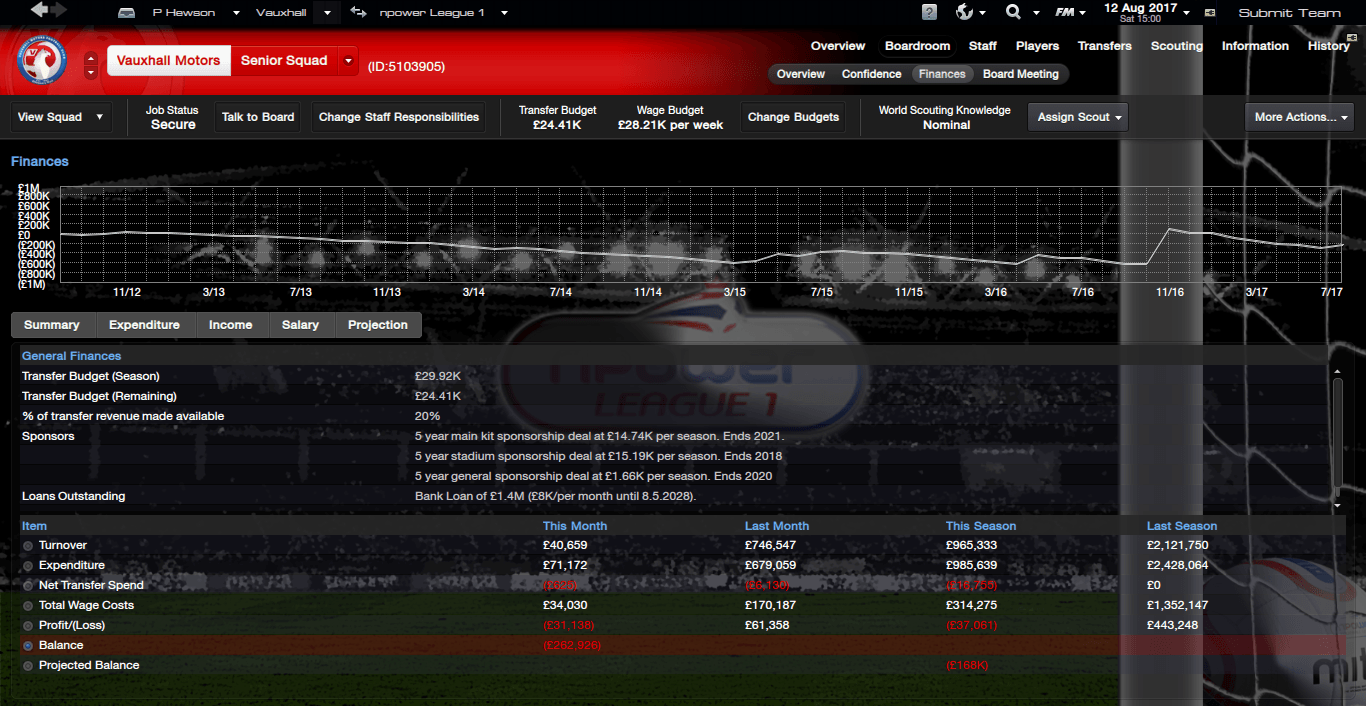 We are still in debt, but we are £200,000 better off than we were last year. This is fantastic for us as it proves that we can make a profit over the financial year. Hopefully we can improve them even more for next season.

That was my pre-season. I will have two updates coming in soon before I update for the month of August (the start of the season). I hope that you are all enjoying this story. It is becoming more enjoyable to write with each passing season!

Louis O.
9 years
Nice win over Villa, but I would, personally, arrange a friendly against a crap team last to raise morale from

Toon
9 years
Things are looking up, other than friendlies, which were quite poor, but against strong sides. Villa result was positive.
1
Login to Quote

Don't worry, the morale is still

from winning the league


Thanks Toon, I can see us keep climbing quickly


You are Michael Smith?

Jer
9 years
Great signings mate! I agree with Toon but that kind of matches will bring invaluable expierence!
1
Login to Quote


I've a couple of more signings on the way, my squad is looking so much better than it did last year! "We are about to get underway in what will be a promising season for us. Last season's memories are still with us and we will be hoping for a repeat performance! We have had a brilliant summer and I am happy with how I was able to strengthen the squad, thanks to the chairman for that. We know what it takes to fight for promotion, but equally we know what it takes to fight against relegation. We are fully kitted-out for this season.

We won't get carried away, however. We know what happens when we get complacent; we get battered the next game. We cannot let this happen to us and we will fight 'till the end for every possible result. We aren't quitters, we are winners. We want to be in the top flight and we will not let a poor run of form get in our way.

The squad is ready for this, and the club is ready for this. This will be a tough season for us, but we will not back down to a challenge. We have overcome the odds before, and this will be no different. We are Vauxhall Motors, and we will be champions!"
Login to Quote

Toon
9 years
Bono is such an inspiring bastard.
1
Login to Quote

Glenn T
9 years
Haven't followed this for a loooong time but it's still as great as ever. Interesting signings too, hopefully you can be in the League One by next season


The season is finally underway! After a wonderful summer, we were fully prepared for a potentially thrilling season. With last season's heroics still in mind, we were looking to push on and to enhance our reputation as a football club.

At a glance, the results look great. After some research, the results look even better! We started off our campaign with a very respectable draw at home to a much fancied Doncaster side. We then dramatically beat Derby on penalties in the Capital One Cup, before dispatching Tranmere and Wycombe in the league. A hard-fought draw against Scunthorpe then came before a shocking win over Peterborough in the Capital One Cup. This was a fantastic month for the club as we are unbeaten in the league and we have a cup run coming together. I also came third in the NPower League One Manager of the Month award. 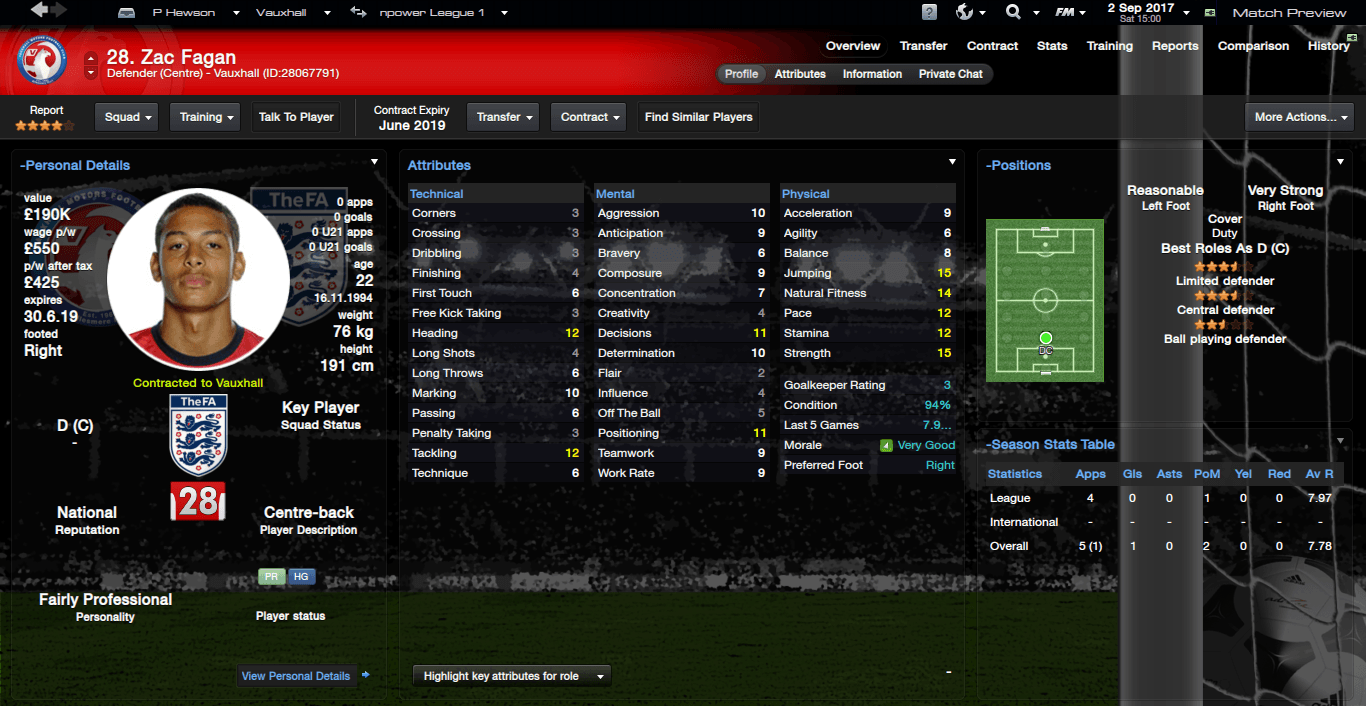 Zac Fagan is my player of the month for August. He has been tremendous so far for us, helping us to many victories with last-ditch tackles and brave headers. He has carried his form from last season in to this season and he has wowed fans and critics alike. He has become a key player for us with his performances and he has proved his true value. He came second in the NPower League One Player of the Month award. 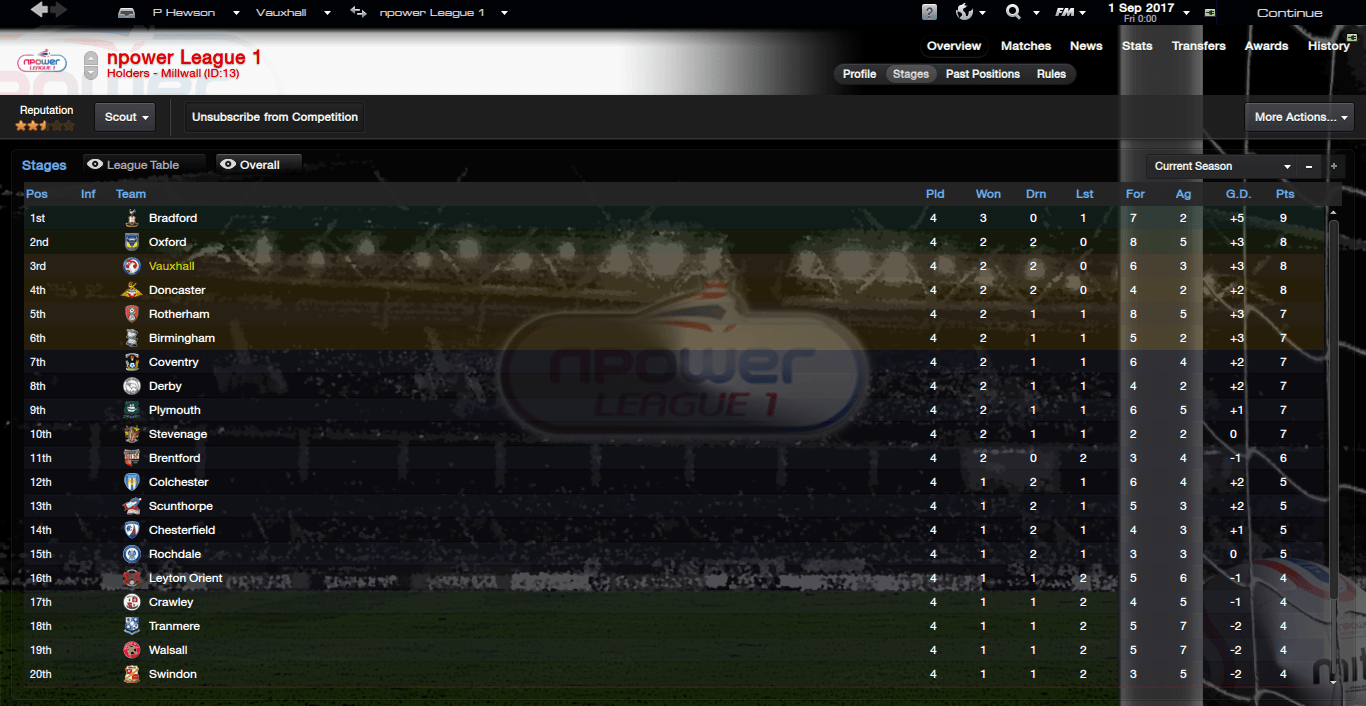 After four games, we sit in third place on eight points. Second placed Oxford are ahead of us on goals for, while Doncaster are behind us on goal difference. Bradford are top of the league by a single point. This has been a fantastic start to the season for us and maybe, just maybe, we can stay in such a commanding position until the end of the season. Callum Walker is a wonderkid winger who we somehow managed to beat Manchester United and Chelsea to. You might be wondering why I signed a non-British/Irish player, as that is against my guidelines. The reason for this is that he is half-English, so he actually does fit in to my guidelines. He is a born dribbler and is very pacey. He isn't the most creative player but he is a solid wide player who will hopefully become a top talent when he reaches his peak. 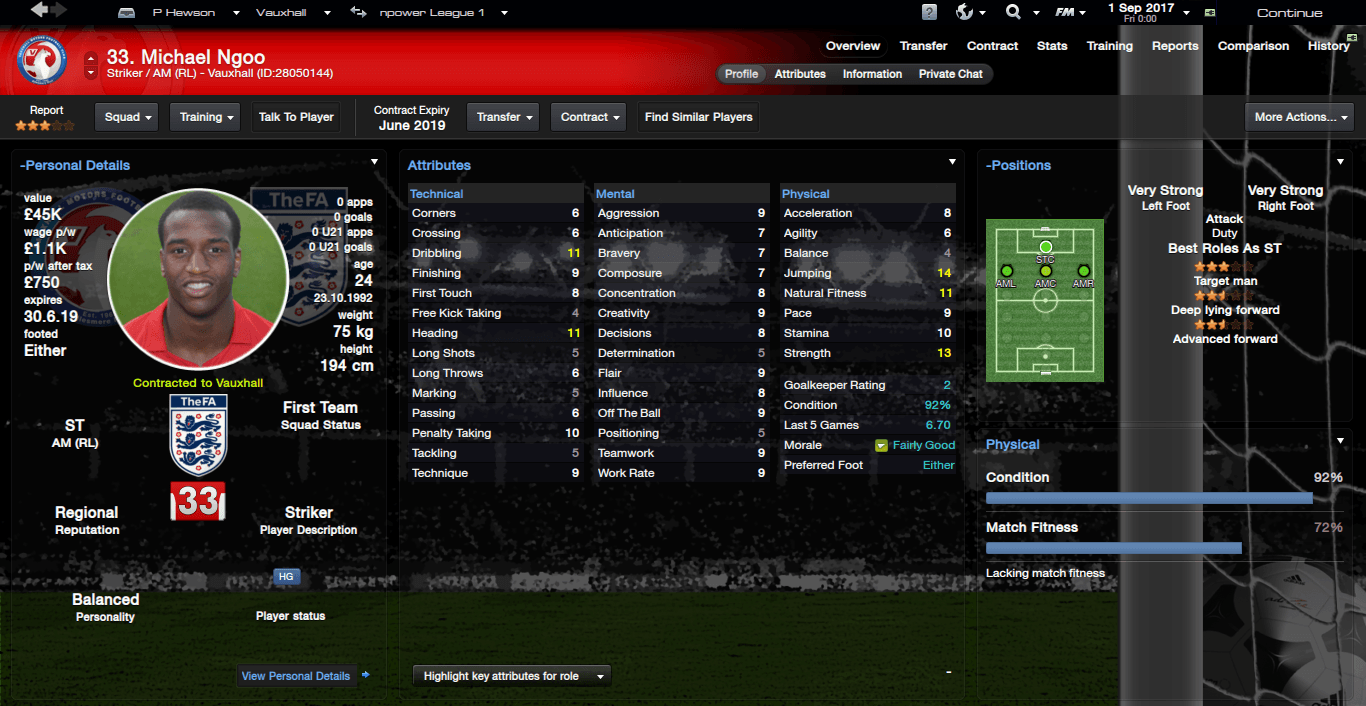 Michael Ngoo is a well-known English striker. He was a Liverpool graduate who never quite made it at the top level. We managed to sign him on a free transfer which I am very pleased about because he is a physical threat for opponents. He is 194 cm tall, which will obviously scare defenders, and he is very good at holding up the ball. He will be an ideal player to bring on as a sub to kill off a game.

We have six very tough games next month, including a Capital One Cup tie against Wigan, which will be the toughest of our fixtures. Hopefully we can keep on performing well in the league and maybe cause Wigan a spot of bother when we face them.
Login to Quote