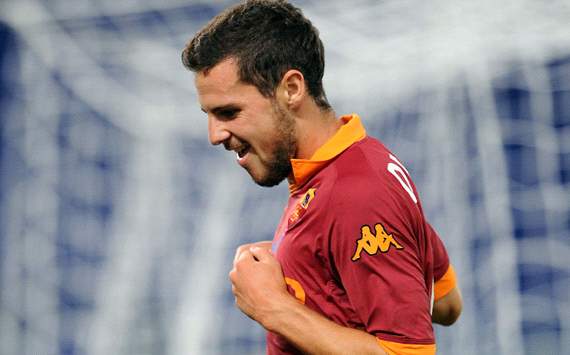 It was a very, very slow start to the season for Mattia Destro. Having been out for 5 months with damaged knee cartilage Destro needed another 3 months of the new season to finally recover and become ready to play once more. The young Italian struggled to score at all. In fact, up until February, the striker had scored a mere 1 goal in all competitions.

Then, finally, something clicked. Or so it seemed.

Destro scored in two consecutive games (including a vital strike against Inter) and some people thought that at last the youthful attacker’s season was going to be revived. The 4 cap Italian looked like his confident self that had done so well at Siena a few years ago. He didn’t score in his next 5 games, though, and the hype that had built up started to die down immensely.

8 goals in his last 6 games say it all, really. The winner against Lazio in the Derby della Capitale, a wonderful ‘perfect hattrick’ against Chievo Verona, the opening goal in the Coppa Italia final against Udinese. Out of nowhere, Mattia had found his shooting boots in the most crucial moments.

Believe it or not, Destro has actually outscored Francesco Totti this season; the legendary captain has tallied 10 goals while his energetic counterpart has just scored his 11th (though of course Il Gladiatore also has a league leading 11 assists). There is no doubt that over these last three months Mattia has silenced a number of critics and become a cult hero at the Olimpico.

“I’m very happy that I’ve started to find the net toward the end of this season,” said Destro in an interview. “It’s my job to score goals and I hadn’t really been doing that much of the season. I’m very grateful to Francesco [Totti] for continuing to have faith in me and play me and now I hope I’ve started to pay back that faith.”

With Marco Borriello expected to depart this coming summer and Totti getting on in age and starting to focus more on managerial duties, Destro will certainly get more and more first team responsibilities. He may, however, come up against some stiff competition for places next season as he and Adem Ljajic may be joined by one of Aritz Aduriz or Christian Benteke.

Regardless of what happens, Mattia Destro has certainly proven his early season doubters wrong with an outstanding end to the season. Remember these last few months; we may have just witnessed the rise of an Italian star. It’s been a long but very successful season for AS Roma. Under the management of player-manager Francesco Totti for the first time, the Giallorossi rose to every challenge put in front of them. Not only did the capital side conquer the Coppa Italia, they captured the Scudetto crown with three matches to spare. Now, Roma have completed those last few matches, and their season is over.

The first of the final three matches would take place at the Olimpico where Roma would entertain AFC Fiorentina. The Viola are the only team to have beaten Totti’s men all season and the Giallorossi were certainly out for vengeance. However, what is now being called Roma’s
“bogey team” Fiorentina managed to escape with a 2-2 draw.

Roma was forced to come from behind not once but twice after two lapses in concentration. Four minutes in Josip Ilicic scored for the Viola only for Mattia Destro to peg the Giallorossi back, and later in the first half Mario Gomez’s go ahead goal was cancelled out by Nicolas Burdisso’s snap header from Miralem Pjanic’s far post corner kick.

Francesco Totti’s men again shared the spoils in their next match, a 1-1 draw on the road to Catania. Having defeated the Etnei three times already this year (including twice in the Coppa Italia semifinals), Roma was expected to take another three points at the Stadio Angelo Massimo. It wasn’t to be, however, as Rolando Maran’s men managed a credible point at home.

Mattia Destro continued his hot streak with a goal clipped over the onrushing goalkeeper after being fed through by Francesco Totti, giving Roma the lead just 13 minutes in. Catania was having none of it, though, and just five minutes later Sergio Almiron hit a firecracker in off of the far post, one of the hardest hit goals of the season. The scores stayed level after a hard fought match, and again Roma was left with one point.

The final game of the season would be a very exciting way to bring the curtain down; Roma would be hosting SSC Napoli. After an atrocious start to the season under Rafa Benitez the Partenopei had only slightly recovered and sat in mid table. However, Hamsik and his men were looking for vengeance after going out in penalties in the Coppa Italia.

Francesco Totti had other plans. Three minutes in the living legend slotted home a penalty kick before setting up Bosnian playmaker Miralem Pjanic two minutes later. The match had barely started and Roma were leading 2-0 already. Napoli held on for the rest of the half but right after the break Totti struck again, followed immediately by Mattia Destro. The captain nearly made it 5 at the death but saw his second penalty spectacularly saved by Pepe Reina. The match finished 4-0 to a dominant Giallorossi.

“It’s been a wonderful season for us,” said Totti after the game. “We’ve played wonderful football at times this season, and to have won the Coppa Italia and Scudetto is a really big achievement for us. I think we’ve done our brilliant fans proud.” 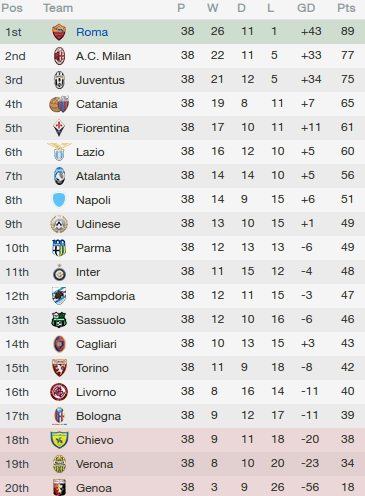 ARSENAL_ruleZ
7 years
Congratulations on the domestic double! You can definitely push for European glory now. Keep up the good updates

pompeyblue
7 years
Congrats mate!
Hopefully next season with some good additions to your team, you can make a push for the Champions League!
Login to Quote

InvertedWingbacks
7 years
well done on the double mate! things look good for Europe next season (: love the update style too

Neal
7 years
ARSENAL_ruleZ: Cheers mate, Europe will be a tough nut to crack, but I'm confident we can succeed!

Walter: Haha yes they had an absolutely garbage season, went through three managers if I remember correctly!

pompeyblue: Thanks bud, can't wait to see how we fare in Europe

Neal
7 years
Sorry about the lack of updates, guys. I've been in Vegas all weekend, I only just got home. I'll try to update today, but if not I'll certainly update tomorrow!

Neal
7 years
Jamesg237: Cheers man, I really didn't even expect this to happen! Hopefully we can continue to do well next year

Roma stormed through Serie A, losing only 1 match all season long and winning a magnificent 26 matches. Boasting the strongest attack in the league (68 goals for) and the second stingiest defense (25 goals against), the Giallorossi were certainly a forced to be reckoned with. Along with this, the Stadio Olimpico was the capital side’s fortress as they boasted a ridiculous 17-2-0 record at home. Despite some road “troubles” with a record of 10-8-1, Roma finished a full 12 points above second placed AC Milan, proving their dominance and thoroughly deserving their first Scudetto in 13 years.


Roma’s very own player-manager Francesco Totti was voted as Manager of the Year by his fellow coaches in his first season in a managerial capacity. Having led his side to an unprecedented Scudetto and Coppa double, there is nobody else that truly deserves this prize. 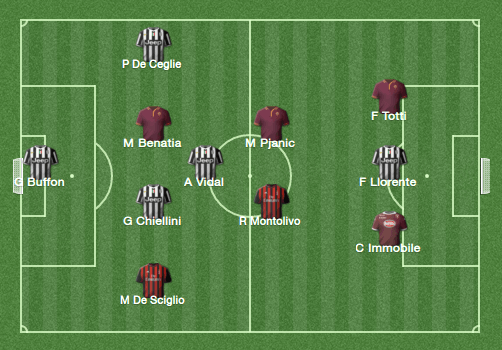 Roma also managed to get no less than three players into the prestigious Serie A Team of the Year. Francesco Totti, who also won Manager of the Year, made the cut, and was joined by teammates Mehdi Benatia and Miralem Pjanic. 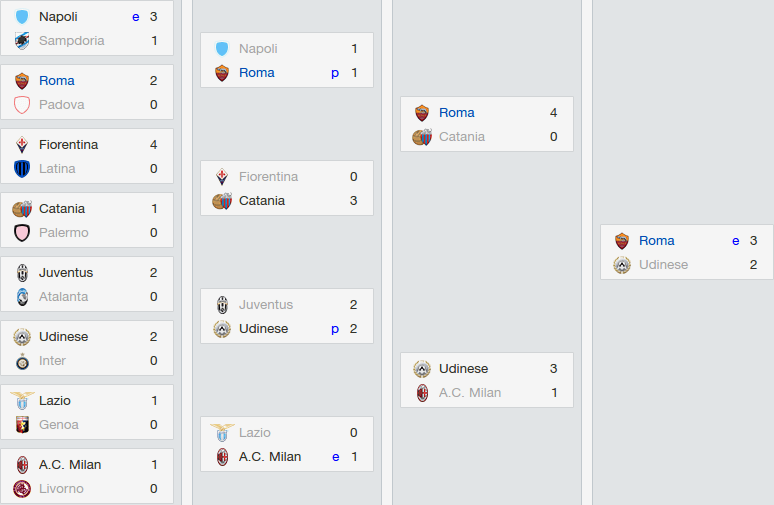 Roma also captured the Coppa Italia, avenging their heartbreaking loss in last season’s final against archrivals Lazio. Padova and Catania proved little trouble but the quarterfinal against Napoli and the final itself against Udinese were matches to behold. In both matches the Giallorossi saved themselves with injury time equalizers before eventually finding a way to dramatically pull of a victory. The 3-2 extra time victory over Udinese will undoubtedly go down as one of the best in history.


The legendary captain endured yet another fantastic season. Despite having to deal with the many stresses of managerial duty, Totti also excelled on the playing field. Injury limited the captain to only 30 appearances but Il Gladiatore made them count, scoring 12 goals and adding 12 assists, being one of Roma’s star performers in their season of glory. Totti managed to make the Team of the Year with his performances.


Often playing alongside Totti in the manager’s favored two-striker system, Adem Ljajic led the team in goals with 18 and pitched in 6 assists to boot. After joining from Fiorentina last season, Ljajic certainly continued his fine form. The Serbian international was often one of Roma’s brightest and most industrious attacking stars, creating opportunities out of nothing thanks to his delightful dribbling skill and ability to pick a pass.


The Bosnian playmaker, though he endured a difficult start to the season, emerged as one of AS Roma’s brightest creative outlets when things were said and done. Constantly unsettling the opposition with his passing prowess and ability to chip in with the occasional goal, Pjanic finished the season with 7 goals and 13 assists, leading the team and the league in the latter category. Pjanic joined Totti in the Team of the Year.


Despite a rather long and arduous transfer saga involving a potential move to Manchester United during the January transfer window, Michael Bradley ended up staying with the Giallorossi, and boy are those Roman fans happy he did. The American international was undoubtedly Roma’s most consistent player and bossed the midfield in his box-to-box role, scoring 2 goals and assisting 4 in a stellar season for him.


Mehdi Benatia was debatably the best defender in Serie A this season. The Moroccan center back was the lynchpin of Roma’s nigh unbeatable defense, especially once he was partnered with Paolo Cannavaro. Benatia turned in a number of scintillating defensive performances and became known for his inch-perfect last ditch tackles when he was most needed. The ex-Udinese man was Roma’s final representative in the Team of the Year.


It was a cracking season for AS Roma fans, no doubt. To win the Scudetto for the first time in 13 years as well as become the all-time leading winner of the Coppa Italia (10 competition wins) in Francesco Totti’s first season in charge as a player-manager will be considered an astounding achievement and will set the basis for what the fans hope to be great future success. Whether or not the Giallorossi can replicate this sort of form next season, however, is the real question. With the added pressure of Champions League football, can Roma adapt and continue to thrive or struggle with fixture congestion? We’ll just have to wait and see, but for now, Roma fans will still be celebrating one of their best seasons in history.

Rablador
7 years
Pfft, FM is unrealistic. Inter finished 11th (okay maybe not so unrealistic with that one), Bologna bagged 9 wins (severely unrealistic) and Ciro "Adolf" Immobile and De Ceglie got in the TotS (do I even have to...).
Oh, and err....'grats on winning the league, I guess. Woooooo.
Login to Quote