Thanks, and yeah it is! Ryan Ferguson's time at Luton Town looks to be coming to an end as he was earlier offered an interview by Blackpool's chairman Karl Oyston, who confirmed this detail. Any manager would find it difficult to reject an offer from a strong Championship club to stay at a club just promoted to League One, especially one who has been in a battle with his own chairman.

Karl Oyston is keen to hire Ryan Ferguson and is rumoured to be willing to offer him a fifteen million transfer budget to help complete season objectives. Ferguson is currently on a contract worth £1,600 per week, while Blackpool are willing to offer him over ten times that amount. Blackpool fans have also shown a positive response to Oyston's job offer for Fergie on social media, and are already dreaming of a bright future with him as manager.

There are reasons for Fergie to leave Luton which are closer to home, too. Ferguson's relationship with his chairman has become rather strained, after several arguments over the chairman's running of the club and the lack of power Ferguson has over decisions made. He might even be forced out of the club, which would be devastating for Luton Town fans.

Who knows what the future holds for Luton Town, will Ryan Ferguson leave for Blackpool? Or will he stay faithful to his players and fans at Luton? What do you guys think? What should Ryan Ferguson do?

No1VillaFan
6 years
Awesome update, but i would stay put
1
Login to Quote

pompeyblue
6 years
NO, You can't leave! You need to get the Hatters to the PL before ever thinking about leaving!
Nice updates as usual btw

lol ik you won't go but I'd wish you would

fmhunter
6 years
Superb update. I really don't know what you're going to do.
1
Login to Quote 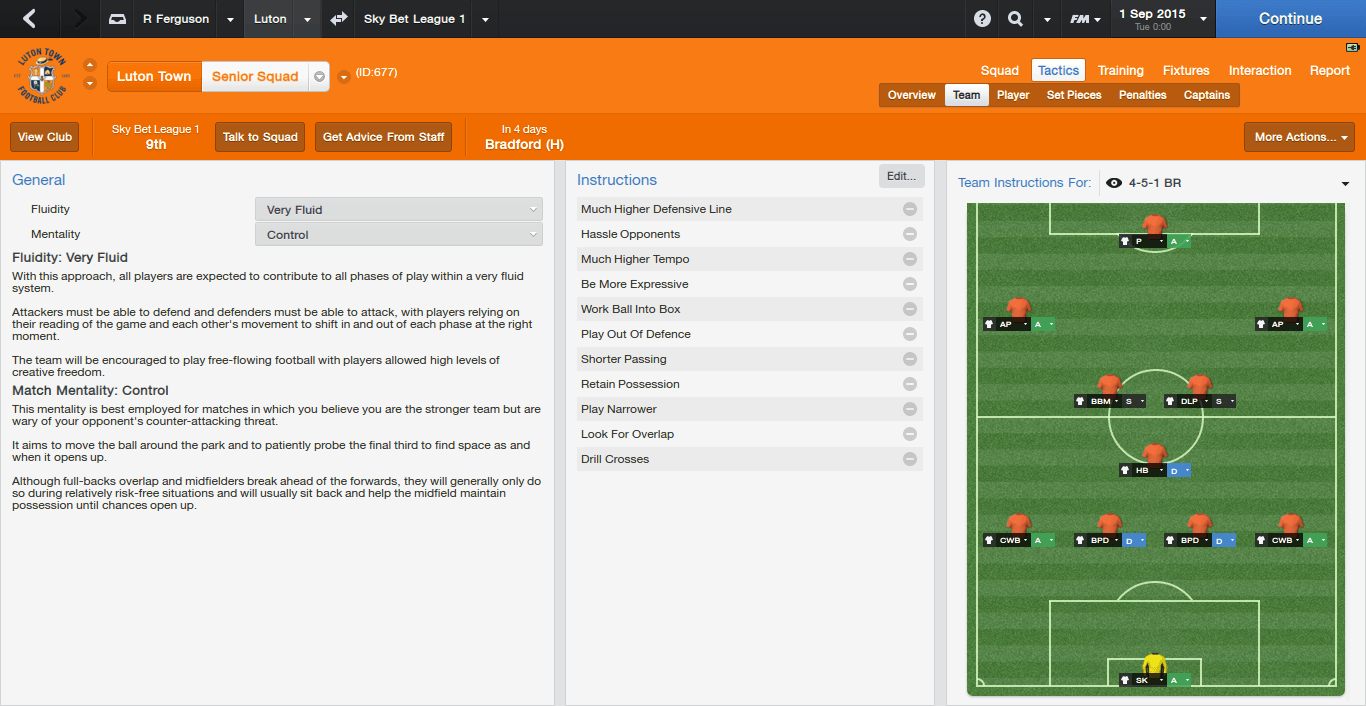 Just to clear up, Ferguson will NOT be leaving Luton! But he does have a huge job to do now, and it starts with a new tactic!


So I have decided to change my tactic for this season. Many of you may know this one, it is the 4-5-1 from my Brendan Rodgers System for FM14. I felt that changes were needed in order for us to compete against clubs which are much stronger than us. I feel that this tactic will help us to really stand a chance against superior opposition.

“I like to control games. I like to be responsible for our own destiny. If you are better than your opponent with the ball you have a 79 per cent chance of winning the game…for me it is quite logical. It does not matter how big or small you are, if you don’t have the ball you can’t score.”
(Rodgers, 2012)

I admire how Brendan Rodgers has his team playing. The system is rather simple, in theory. Every player must be able to control and pass the ball well, and it makes sure that we utilise all eleven players on the pitch for each attack, if needed, rather than just three or four. This means the team, as a unit, is much stronger and has a better chance of success in all areas of play.

The defensive set-up is very strong. The line pushes up very high and the players press and hassle the opponents when they are on the ball, in order to force a mistake. Every player has an important role in winning the ball back, which is very important for us. As soon as we get the ball back, we do not needlessly kick the ball long up the field in hope of the pass working. The players move the ball around intelligently, always making sure to keep the ball rather than lose it. It is important for the players to move around freely to make sure that there are always passing options available. If you can control the ball, you can control the game, and that is what this tactic is designed to do. 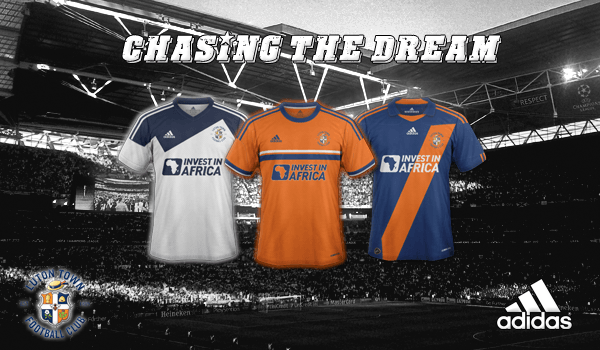 It is that time of the year again! Luton Town have released their new set of kits for the season 2015/2016, and their slogan for this year is "Chasing The Dream". This is inspired by one of Ryan Ferguson's passionate team-talks with his players during the closing end of last season. The response to these kits from the players and the fans have been fantastic and these kits are set to be a must-purchase for all Luton fans. Adidas are the makers, once again, but it is Invest In Africa who take the shirt sponsor this year, with easyJet losing their rights.

The home kit is of the traditional Luton orange, with a heavy blue hoop across the chest and a thinner white hoop just above it. The three stripes are of the same blue as the hoop, and the cuffs are blue and white. This is a very modern kit and you will be sure to see many Luton fans donning this kit throughout the season.

The away kit is white this year, with a navy design at the top of the chest and on the shoulders. The stripes are white and blend in to the sleeves. This style of kit is loved by many football fans, and has been worn previously by Swansea City during the 2013/2014 season. This is the kit which Luton will wear on their travels.

The third kit is a very relaxing, different style of kit compared to the others. It is a dark blue, with a single orange strip going from the left shoulder to the right hip. The three stripes on the sleeve are orange and the collar is a mix of blue and orange. This has proven to be the favourite of the three kits so far and will certainly be a big seller.

All three kits are available in Luton Town FC's official store located at Kenilworth Road, Luton Town. The price for an adult kit is £25, while kids only pay £15 for their's. Buy your kit today!


So you have seen the kits, but which one is your favourite? Comment below!

fmhunter
6 years
Gotta be the home shirt for me, but they're all SEXY!!!

cfcmarkt
6 years
All really nice kits but my favourite is the white one.
1
Login to Quote

Arch Mon
6 years
All three look great! My favourite is the third kit. If Rangers had these kits, Nil By Mouth's and the Bhoys' heads would explode.
1
Login to Quote

Josh_MU
6 years
GOD DAMN! Those are some sexy kits, I'll say it again, can I have one?
1
Login to Quote