Back-to-back promotions seemed impossible at first, yet we won two consecutive league titles in magnificent style! We know that a third promotion in as many years would be difficult, but dare we dream?

I don't think anybody is surprised with our results upon discovery of our opponents. With the likes of Chelsea and Man City in our fixture list, it was no wonder we had a horrid set of results to go away with. However, I have been breeding a new tactic, or an old one depending on how you look at it, in pre-season. Hopefully it can fire us to glory this season.

We let a lot of players go this transfer window, but we brought in quality replacements who will surely become important members of our squad. I'm happy with the dealings I worked in this window and I feel that I've really strengthen the squad to a level where I feel we can be strong in the new league.

Conor Henderson was our first signing of the transfer window, as he joined us on a free transfer. The centre midfielder graduated from the Arsenal academy although couldn't manage to break in to the first team in neither there or Hull City. The former Irish youth international possesses great passing skills and is very creative. He will be a great playmaker for us this season in our starting line-up, and has the potential to play for us at even higher levels.
Fee: Free Transfer
Value For Money: 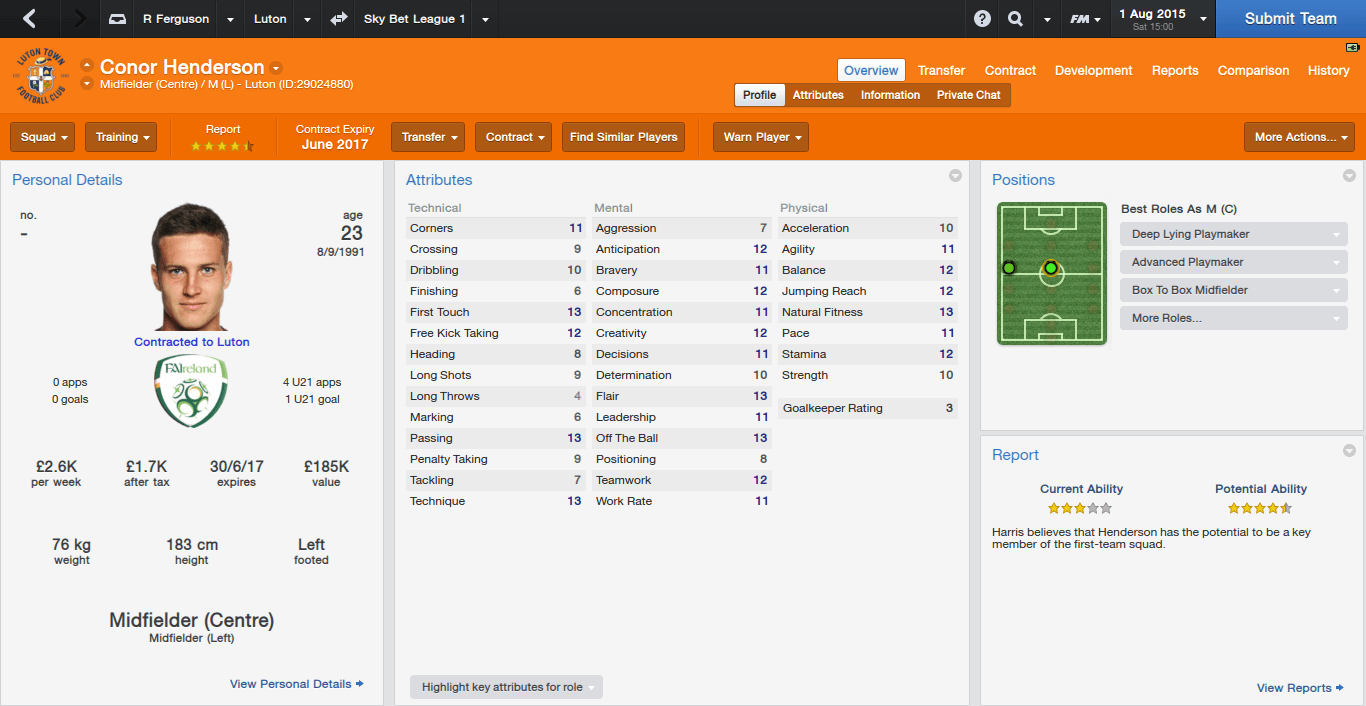 Paulo Jorge joins us on a free transfer. The young Portuguese holding midfielder was a product of Braga's system but moved to FC Porto in 2007. However, unable to find a way in to Porto's squad, Jorge was sold to Blackburn in 2012. He player for Blackburn for a few seasons before being released. Jorge is a very good defensive player and will provide us solidity in midfield.
Fee: Free Transfer
Value For Money: 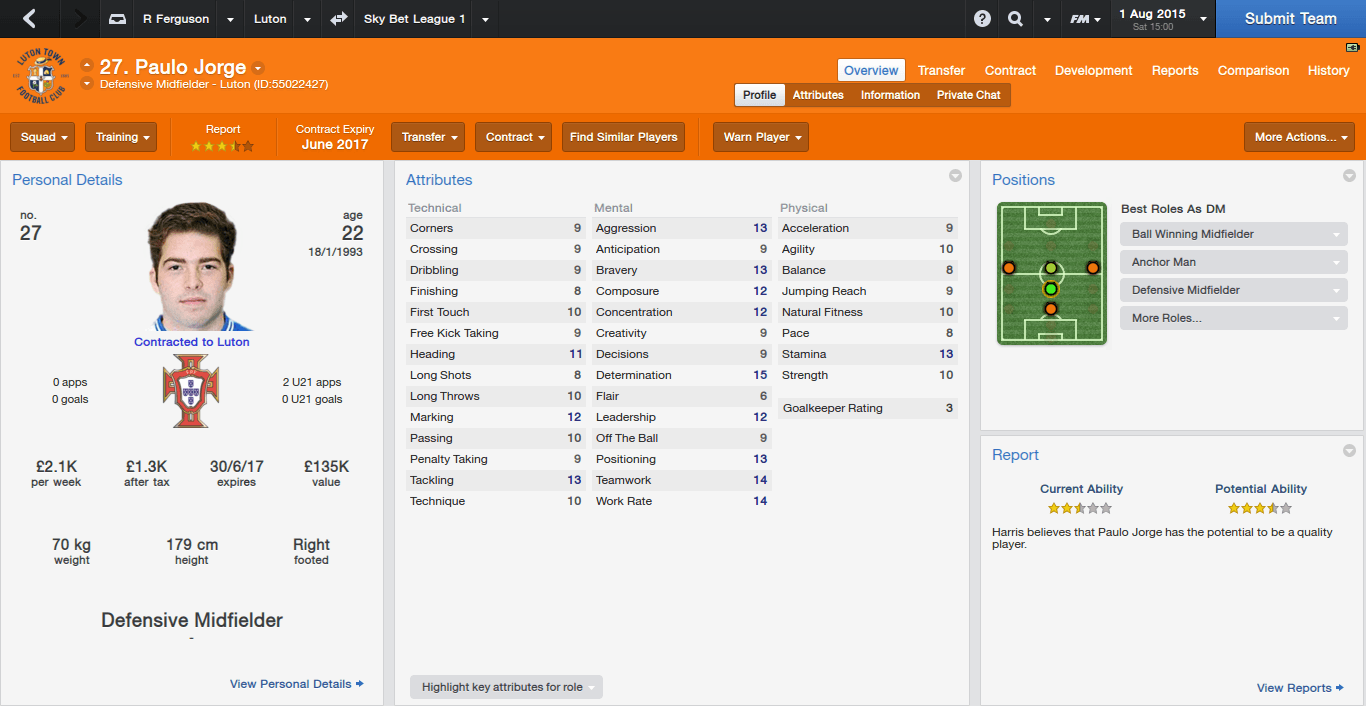 Paul Hungtington joined us from Preston on a free transfer. The well-travelled centre back will play a key role in helping to stop opposition attacks this season. His obvious strength is his aerial ability, where is unmatched.
Fee: £0
Value For Money: 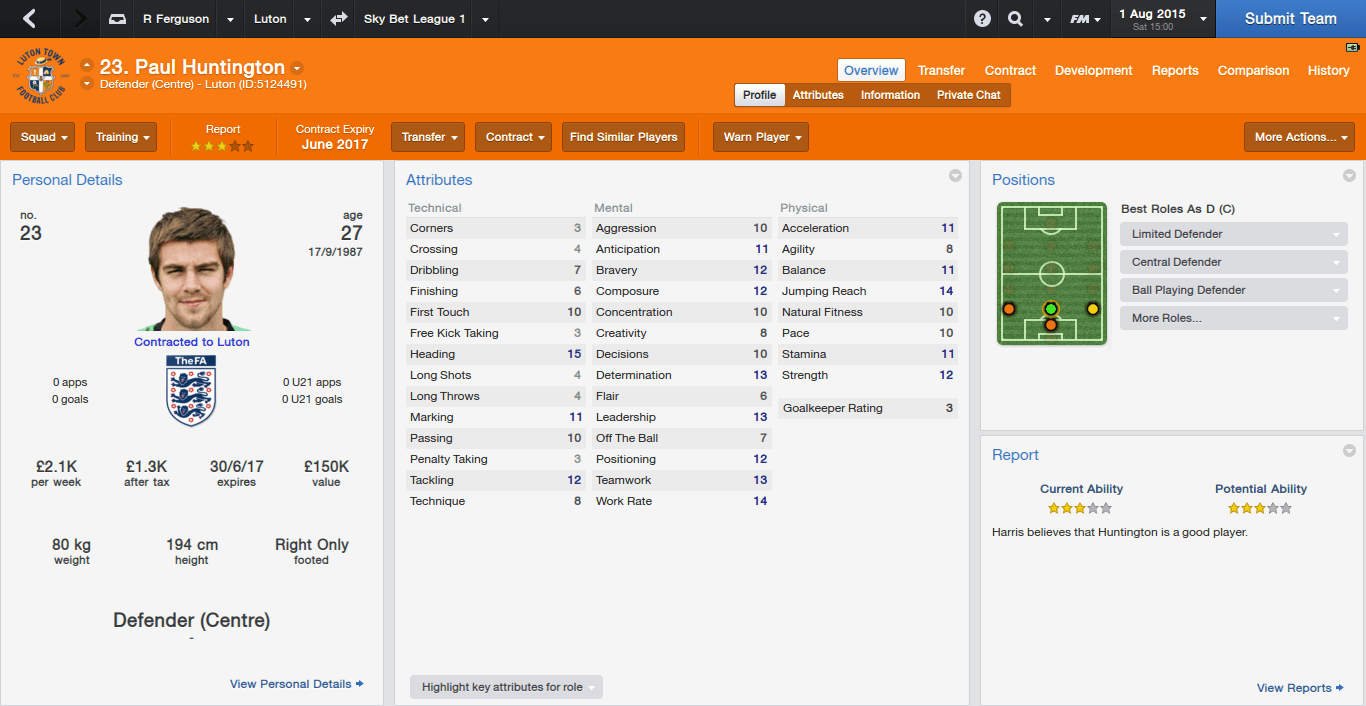 Rhys Bennett was our only money-move of the transfer window as he joined us from Rochdale for £19k. He is a very athletic right back, with a lot of height. He still has many years left in him and will hopefully help us reach our goals.
Fee: £19k
Value For Money: 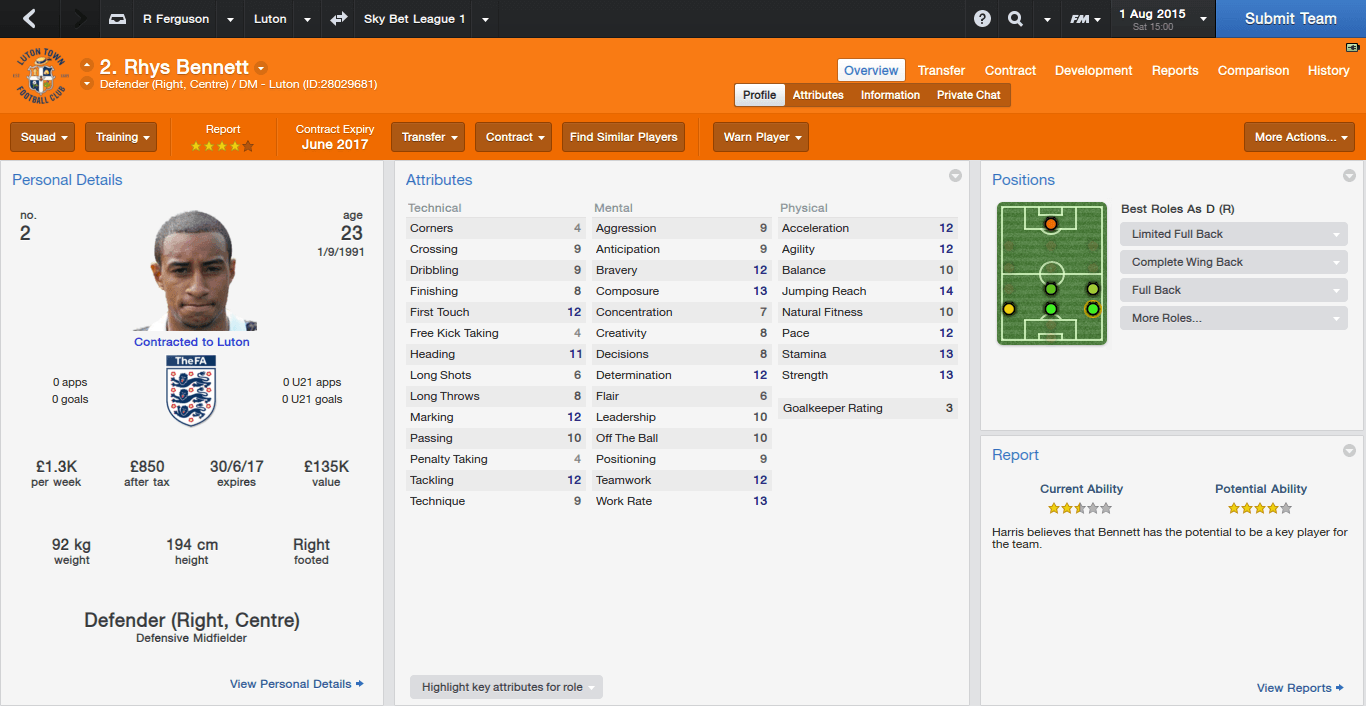 Bennett's team-mate Ashley Eastham also joined us from Rochdale, on a free transfer. The tall centre back will add depth to our squad and will hopefully be a solid player.
Fee: £0
Value For Money: 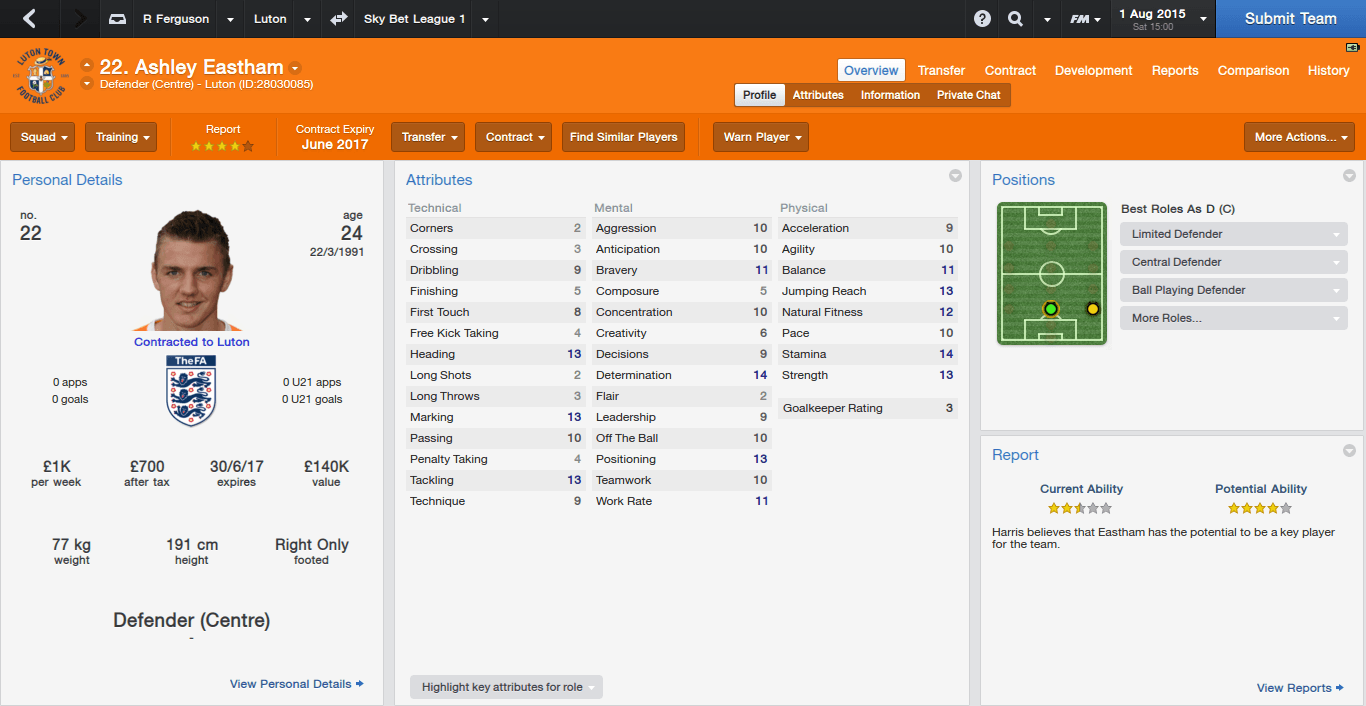 Euan Smith joins us on a season-long loan, once again! Our hero from last season had too big a price tag on him for me to even consider making a bid for him. However, I do feel that another loan spell is the perfect answer for us and for Smith. In a new tactical system and with better players around him, Euan will have more chances than ever to get his name on the score sheet, which he is very capable of doing. Hopefully he can make the same affect which he did last season.
Loan Fee: £0 (50% wages)
Value For Money: 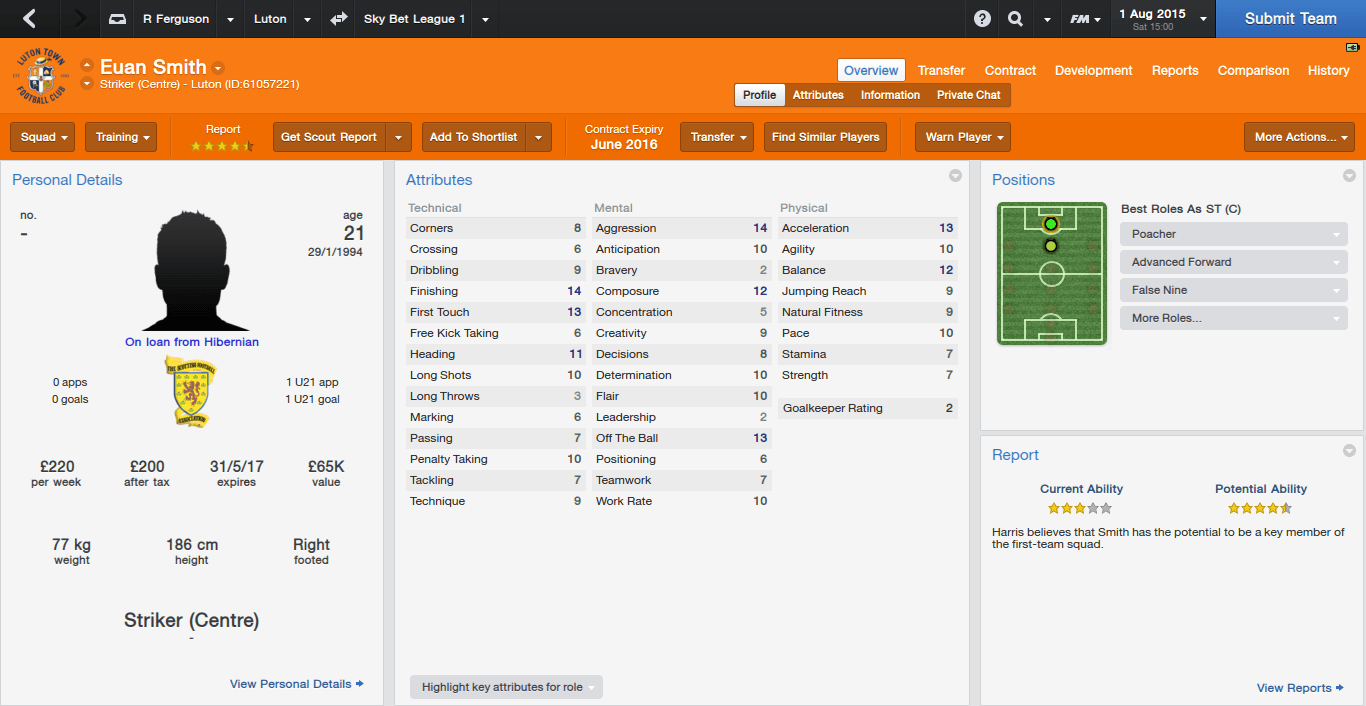 Irish winger Daniel Kearns joins us on a free transfer. The former West Ham and Peterborough player has fantastic ability for our league and will certainly be one of our most important players this season. He is a tricky winger with plenty of flair and the ability to do damage to the opposition.
Fee: Free Transfer
Value For Money: 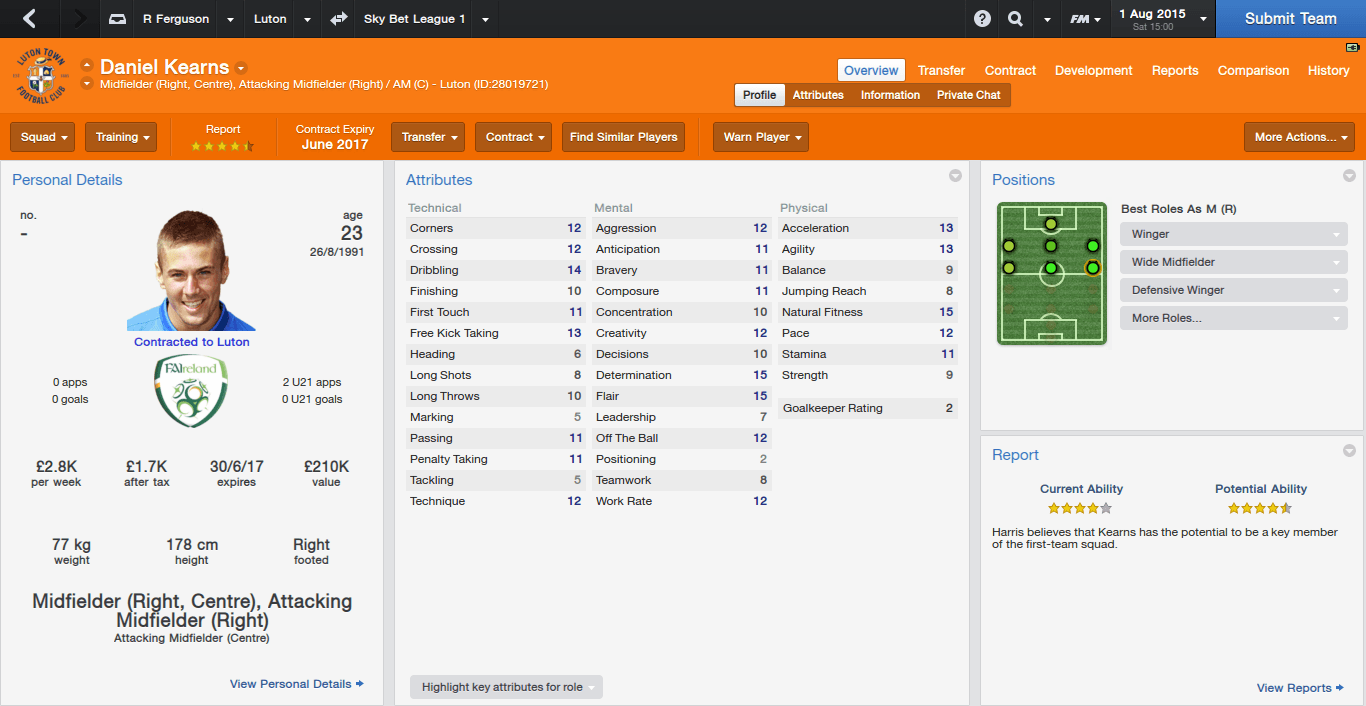 Our final signing of the transfer window was that of long-serving Rangers defender Ross Perry. He is quite a fantastic defender and I'm happy to have picked him up on a free transfer, having previously been quoted £250k for his signature.
Fee: Free Transfer
Value For Money: 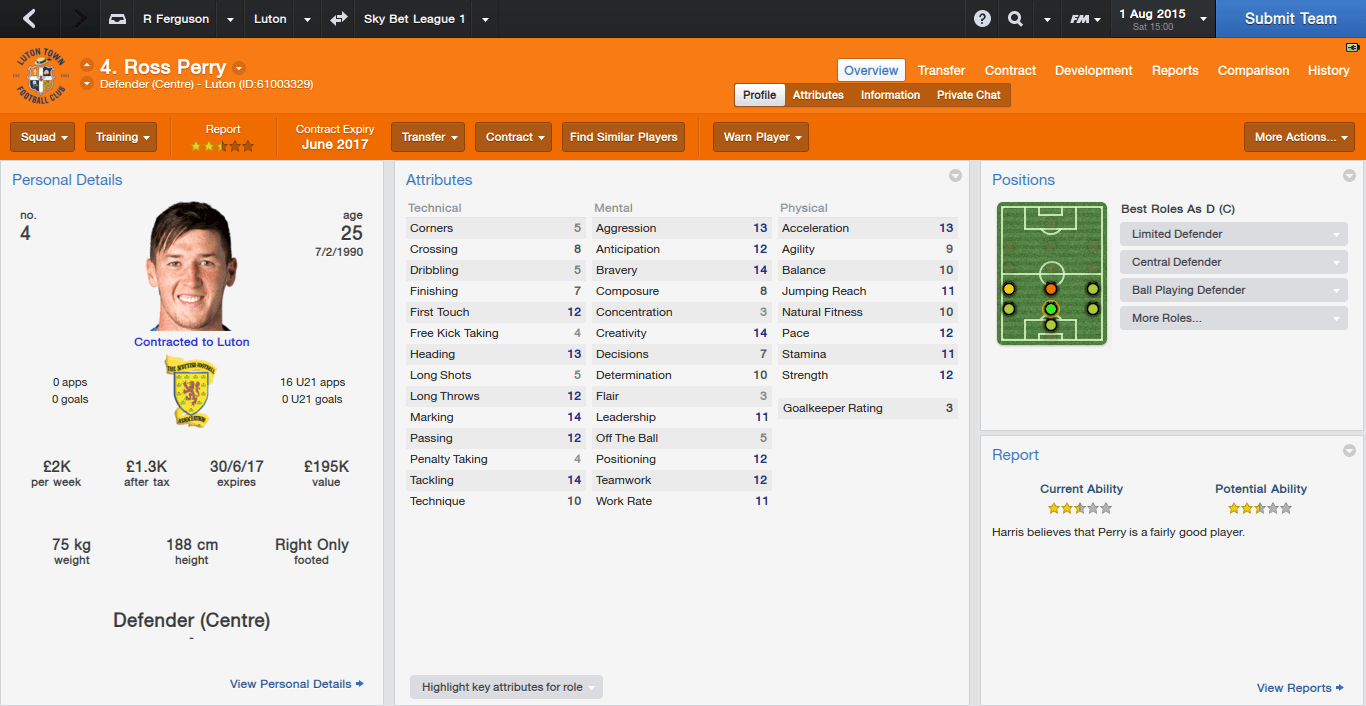 We have six games in our opening month of the season, including a Capital One Cup clash with Charlton Athletic. I honestly do not know how we will do this season, because there has been a change of class moving up another league. Hopefully we can keep our heads afloat and perhaps pull off another shock league title win!

Jack
5 years
Some very nice signings! Will be interesting to see how you fare in League 1.
1
Login to Quote

cfcmarkt
5 years
Kearns is a great signing and you've got Smith back as well. Good Luck.
1
Login to Quote

Louis O.
5 years
Heh, Luton made it to League 1 on my FM11 save! Except they didn't make it any further afterwards

Walter
5 years
Where are the regens???!