cfcmarkt
6 years
Great results there mate and of course Smith is player of the month. Congrats on your new contract.
1
Login to Quote

It wasn't the most consistent of two months, but there is no such thing as an easy game in football, and our opposition certainly proved that. We lost all three of our away league games over the past two months, which pinpoints our away form as being our problem. Our home form has been fantastic, however, as we won four and drew one of our five home league games. We have also progressed to the Third Round of the FA Cup, and hopefully we can continue to progress in that competition this season, as it is 'The Cup Of Dreams'. I haven't chosen a Player of the Month(s) this time, as I felt that the whole team deserved the award. 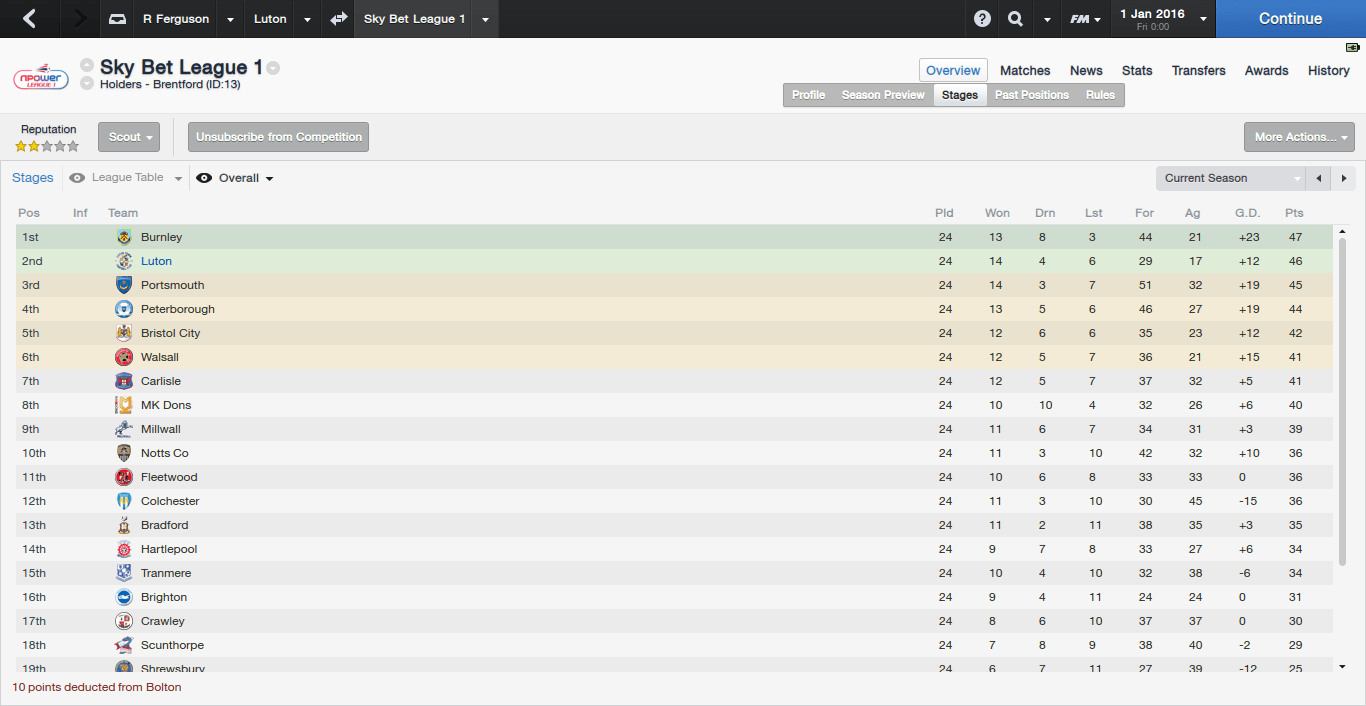 We have dropped down to second place, but we are just one point behind the leaders Burnley. I am absolutely delighted with how we've performed this season. We have made some massive strides and we have taken the league by shock/storm. There is still a lot of work to do in order to secure a third consecutive promotion, but I feel that with the right luck and a good run of form, we can secure it.

The two stand-out games next month are the away games against Morecambe (League 2) in the FA Cup, and against Burnley in the league. We have plenty of away games next month, so we need to step up our away form quickly. Hopefully we can do so and earn ourselves a hefty number of points.

pompeyblue
6 years
Not the most consistent couple of months but their was still some very good results, and you are doing great!
2nd in the league going into January is fantastic

captainbrickarms
6 years
A ok month there but hopefully you can do better next month!
1
Login to Quote

Josh_MU
6 years
Decent month. some good results in there and you're doing magnificent in the league!
1
Login to Quote

The 510 Series
6 years
Burnley in League One?

Specialist in success
6 years
Bolton and Burnley in League 1...

Haha, Niko showed us a screenshot of Bolton getting relegated from the Championship due to administration. The same is happening again!

Justice
6 years
pompeyblue, yeah second is a great place to be right now, thanks

captainbrickarms, hopefully I do, thanks

The 510 Series, yeah for some reason they turned to poo

Specialist in success, as The 510 Series said, Bolton went in to administration in my save and well, Burnley have just been horrible

Walter
6 years
Bolton and Burnley in League 1! This is like a dream come true!!

You had a dream that Vauxhall and Luton really would become world powers... in real life, Luton are one step closer.