You had a dream that Vauxhall and Luton really would become world powers... in real life, Luton are one step close.

On the other hand, Vauxhall are now amateur again, so it all balances out! 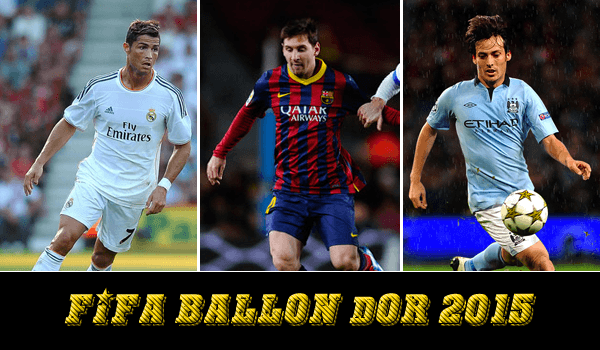 It is that time of the year again! This is when the three best players in the world over a calender year are announced. We all remember last year's result, with Lionel Messi pipping Cristiano Ronaldo and Erik Lamela to the Ballon d'Or. Who would win it this year? Would Messi retain his title for a sixth consecutive year?

Third place, on 192 points, is Manchester City's Spanish magician David Silva. The twenty-nine year old attacking midfielder has been in inspirational form over the last year, despite suffering from injuries such as strained knee ligaments, a bruised shin and a torn hamstring. These injuries have hampered his appearance total, having played just 32 times for Manchester City over the course of 2015. However, he still notched up 9 goals and 17 assists as he helped his team to second place in the Barclays Premier League. Some people say that he is on the decline, but David Silva is out to prove them wrong.

Once again, as expected at this stage, Cristiano Ronaldo takes the infamous second place syndrome to a whole new level. This is the sixth time in his career that Cristiano has come second in the FIFA Ballon d'Or proceedings. The thirty year old Portuguese winger has also struggled with injury this year, tearing his calf muscle midway through March. However, he still notched up 39 appearances, scoring 19 and setting up 6 goals. His magical form has lead Real Madrid to the Liga BBVA for a second year running, and a third time in four years. Will he ever beat Lionel Messi to this famous award? His chances are running out!

For once, Lionel Messi has managed to keep away from injury for a whole year and this means that he takes first place by storm, for a seventh year running! The little Argentinian has played 49 times for Barcelona in 2015, scoring 27 and assisting 10. His ability to create something out of nothing has been key to Barcelona, as they finished runners-up in Liga BBVA last term, but are currently leading the standings by nine points. Messi's magical moment of the year came in a 2-0 win away to Atletic Bilbao, where he flicked the ball up for himself with his back to goal and thirty yards out, before picking out his striker partner Javier Harnández, who ultimately found the net with a pinpoint header, with the most deftly executed overhead kick passes which gave the world yet another reason to love Messi. He is truly a magnificent player, bravo! 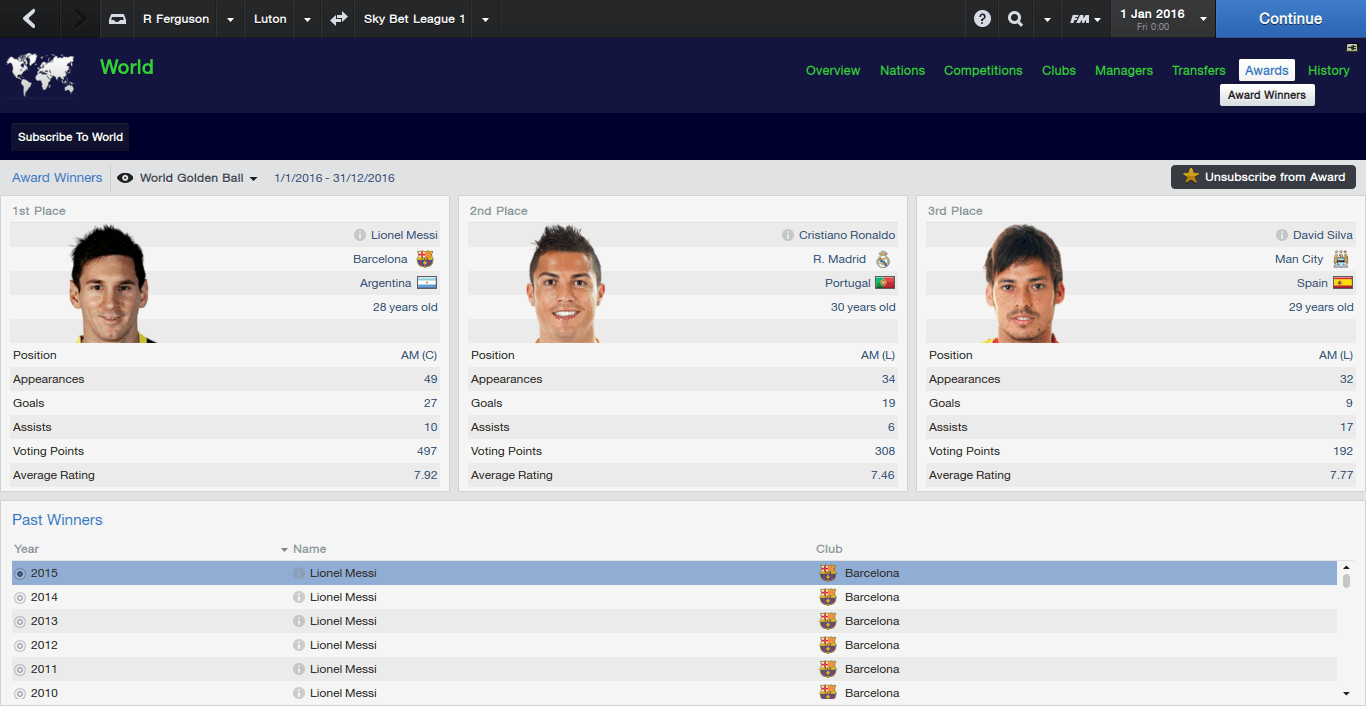 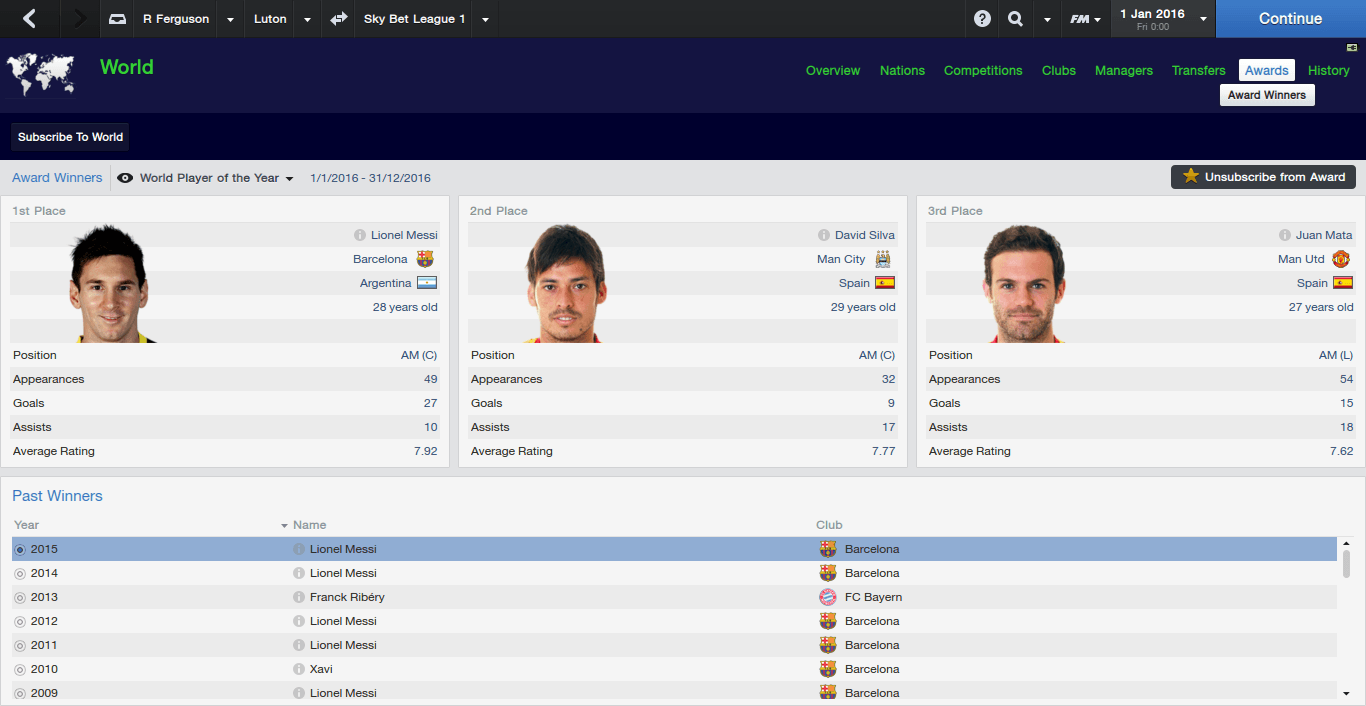 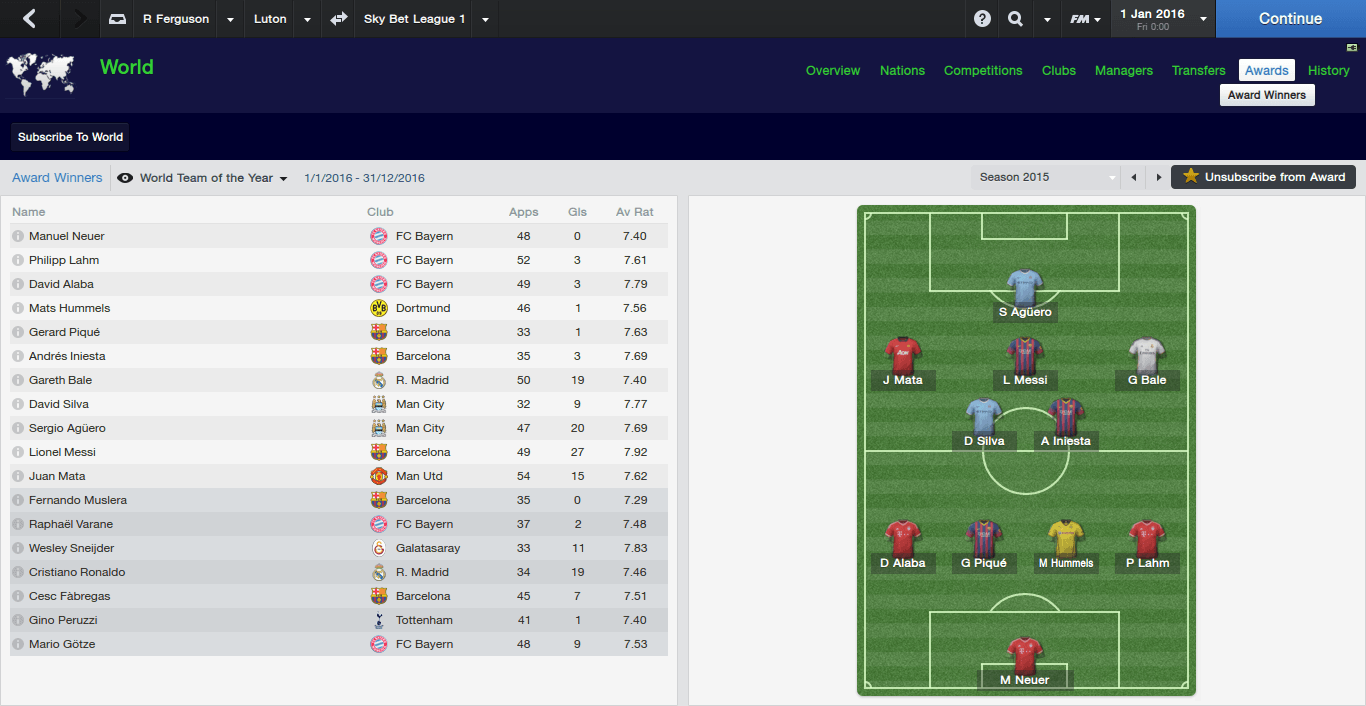 Jer
8 years
I feel sorry for Cristiano.
1
Login to Quote

Justice
8 years
Pauker, so do I

Josh_MU, it always is, thanks

captainbrickarms
8 years
Someone should remove messi, he makes it too boring

captainbrickarms, the award is rigged

Great Graphics as always though!
1
Login to Quote

We started 2016 with a bang as we powered past Morecambe in the FA Cup, courtesy of a last minute penalty from Daniel Kearns. Four back-to-back wins in the league set the mood for what would hopefully be a successful year, but three loses in a row to end the month soured the tone. Despite our failure to earn any result in the last three games, I'm very happy with this month. However, we will need to get out of this growing rut quickly before we are devoured by the Curse of the Football League. 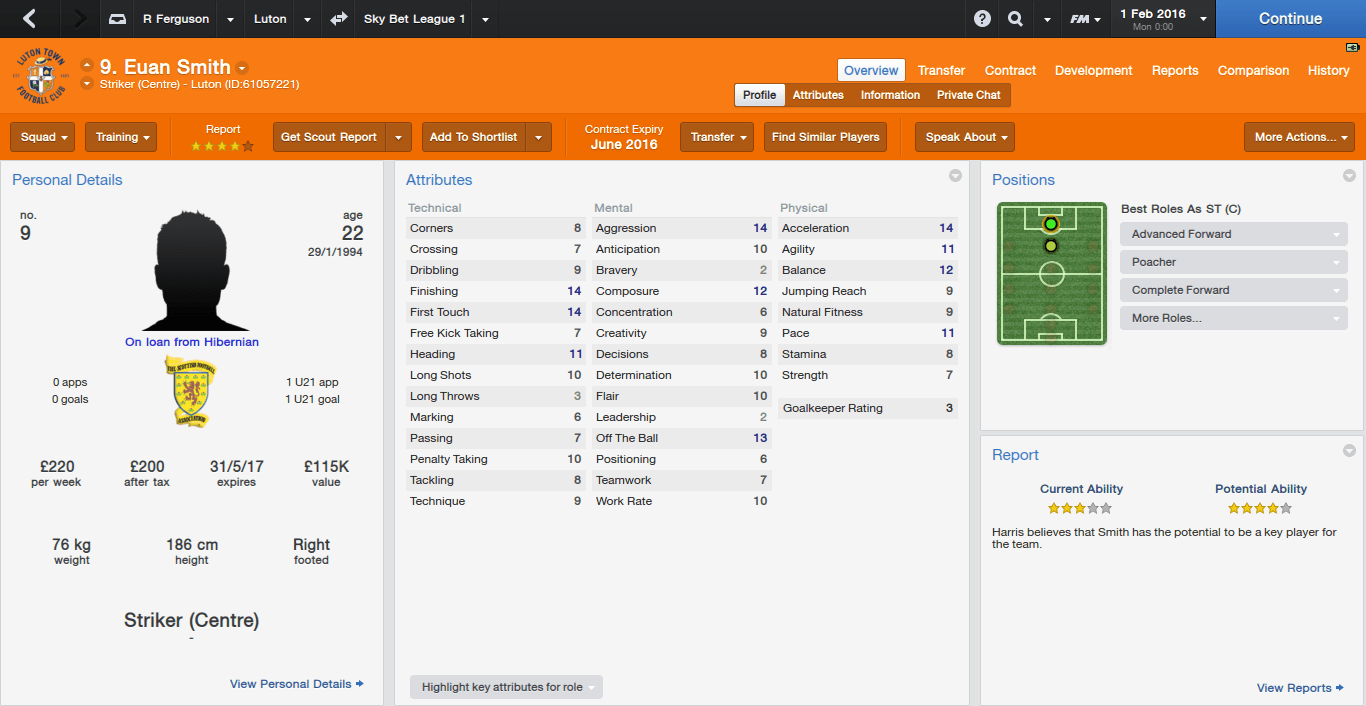 I bet you're all so surprised (sarcasm) that Euan Smith was our player of the month! The Scot has scored eight goals this month to continue his conquest for another 30 goal season. It is quite funny that the player who may just lead us to our third consecutive league title is in fact not a Luton Town player. Remember, we only have him on loan, and Hibernian might just decide to hang on to him next season. 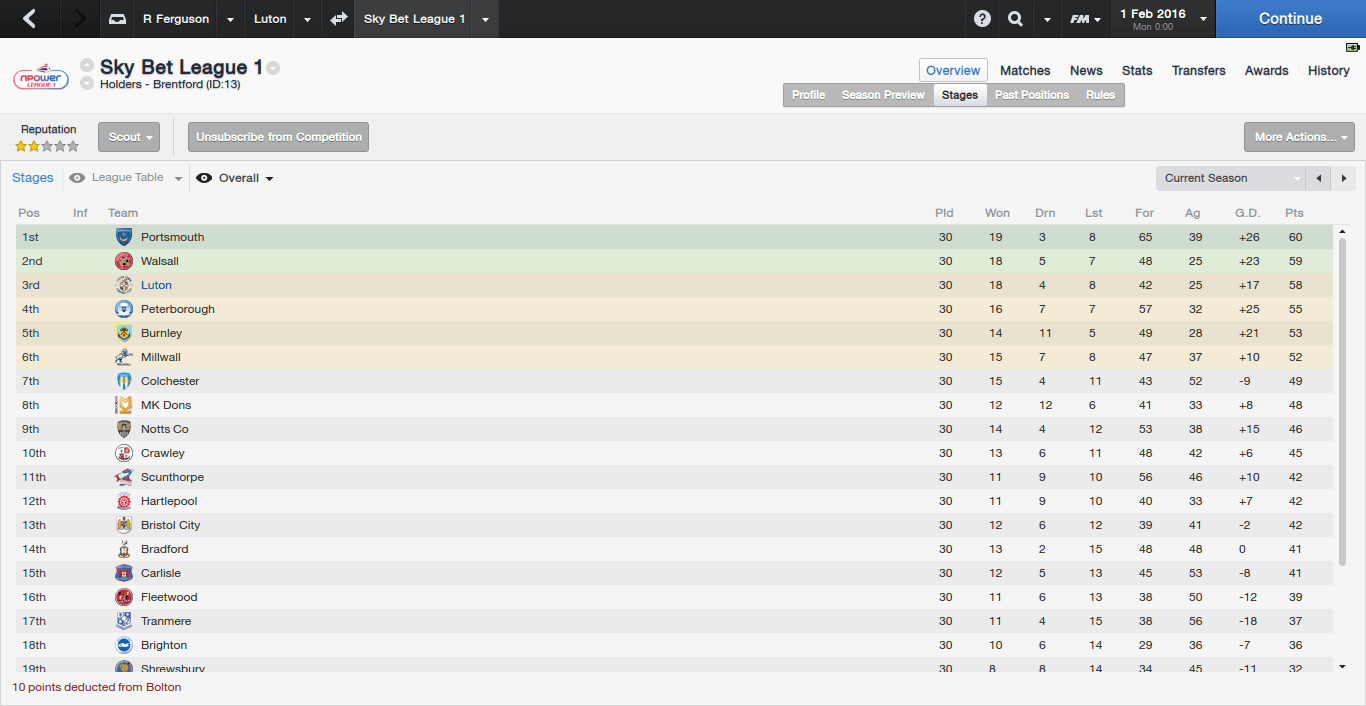 Our two defeats this month see us drop to third position, where we are two points behind league leaders Portsmouth and one point behind second placed Walsall. We are still well in the chase for promotion, so I'm not concerned by our drop in form.

We play eleven games over the course of the next two months. After our dismissal in the FA Cup to Sheffield Wednesday, we are left with just league games to play. The games against Portsmouth, Colchester and Millwall could prove to be the most challenging, so we will need to be on top form to dispatch them. Hopefully we can do enough to keep us in the hunt for a third promotion in as many years!

You have been doing amazing, congratulations!
1
Login to Quote

The 510 Series
8 years
This has just suddenly occurred to me. Is it a coincidence that you chose Luton after your Vauxhall story? It's just that Bedford Motors and Vauxhall Motors were made in Luton.
1
Login to Quote

pompeyblue
8 years
THE MIGHTY POMPEY ARE TOO GOOD, TOP OF THE LEAGUE!
As for Luton...hahaha we are too good for you!

Just kidding, good month there. I am sure you will take the top spot back next month