One more month left this season, just five more games to claim the title! All we needed was nine points to guarantee that we win the title, but we knew it would take much less to do so. We went out this month with pressure on us to perform, something which these players have never experienced before. Could they cope with their nerves to ensure a double-winning campaign?

Well, we certainly got more than the nine points which we needed to win the title! We started the month with a sinking defeat to Aldershot, despite taking an early lead from the spot. We bounced back, however, to win two games on the bounce. Our final home game of the season against Forest Green was the first chance we got to secure the title, all we needed was a single point from that game. We did get the point, although quite luckily, and we secured the Skrill Premier in front of our own fans! Bouncing on cloud nine, we finished the season by smashing three goals past Hyde in a 3-1 defeat of the Manchester-based club at their own stadium. 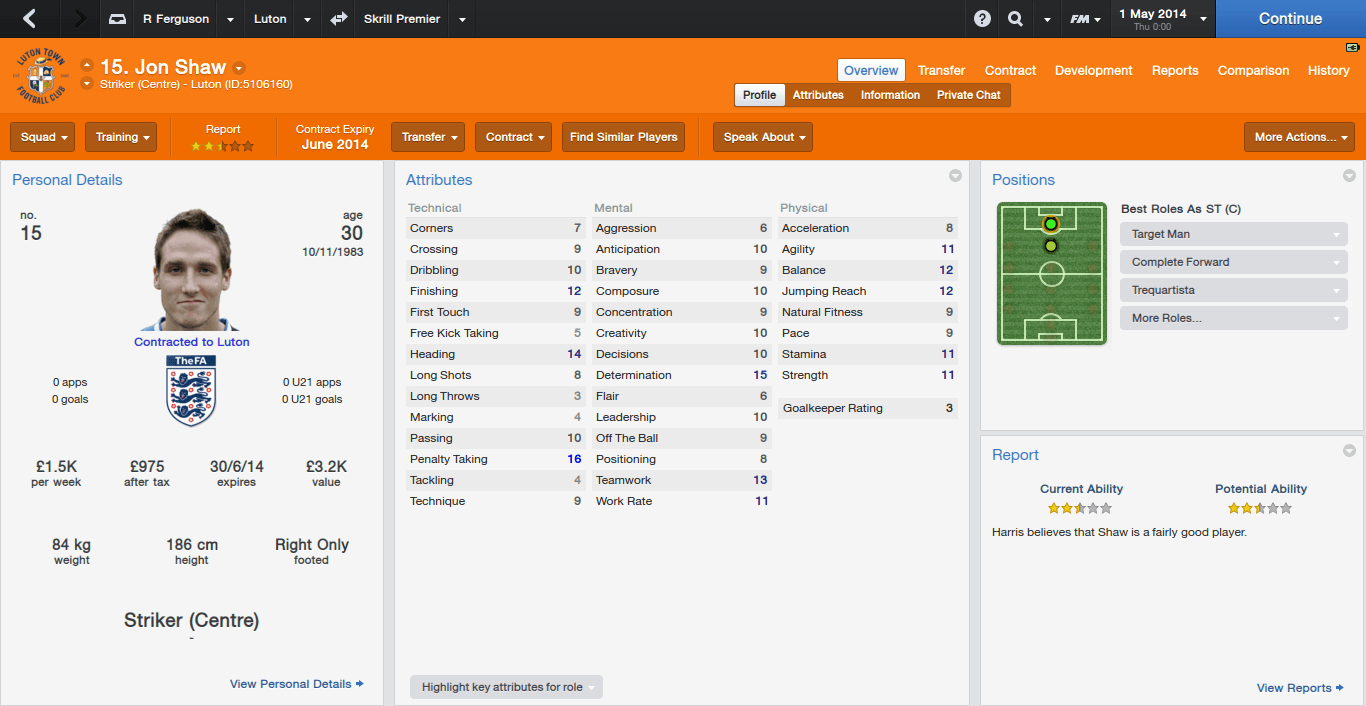 Jon Shaw has been our best performer this month. Despite us not really playing to the best of our standards, Shaw put in a good shift and claimed two goals this month. It is good for him to end his Luton Town career on a high, as unfortunately I will be releasing him at the end of this season. For some reason or another, he is unhappy with playing for Luton and has wanted out since Day One. Hopefully he can go on to finish his career well. Despite wanting to leave, he put 100% in to every training session and every game, and has scored some very vital goals for us. Thank you for the memories, Shaw! 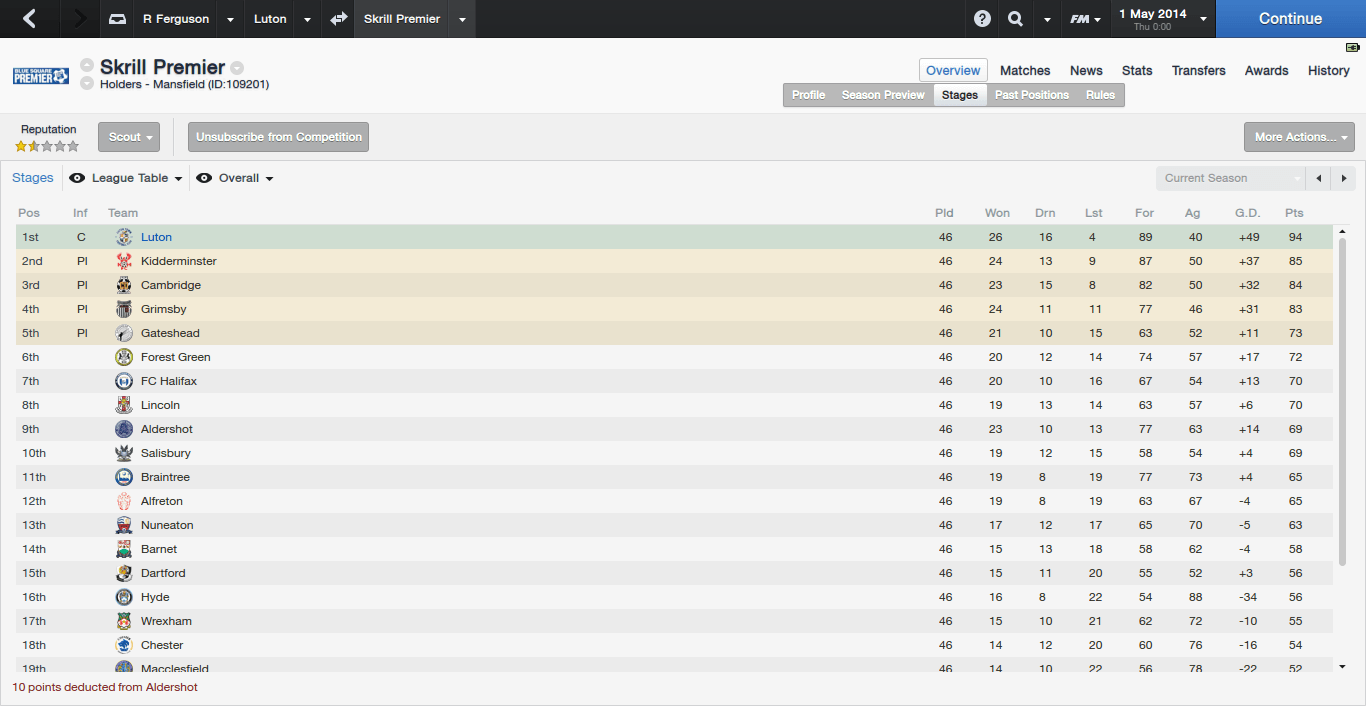 We ended up winning the league by an emphatic nine points! Our ability to avoid defeat this campaign (just 4 losses) has been the key to our success. We have been very structured and disciplined in defence and very sharp and lethal on the attack. Our Goal Difference of +49 says it all. I am so proud of my players for winning the double this season, they have been amazing!


"So what's next?" I will be writing up a few posts to finish off the season:
1) Season Review
2) Top 5 Players Of The Season
3) A few non-FM related story posts

I hope that you have all enjoyed this season, keep reading for more!

Josh_MU
8 years
CONGRATULATIONS! Prolific campaign all round! Hopefully you'll have the same success next season!

Josh_MU, thanks mate, hopefully we can perform well next season


Our first season is complete, and what a season it was! We had some fantastic moments and plenty of highs to celebrate. Let's look back at how we performed in each competition. 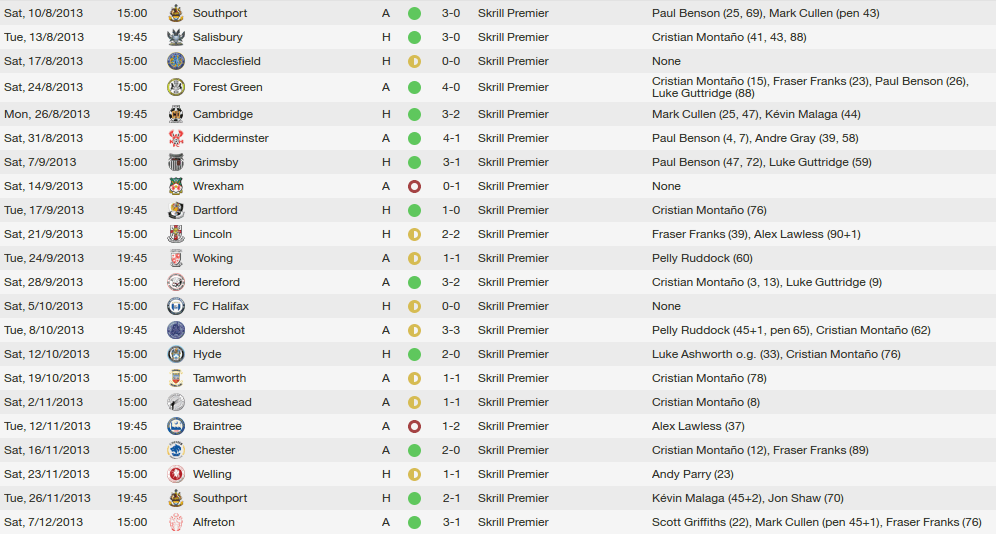 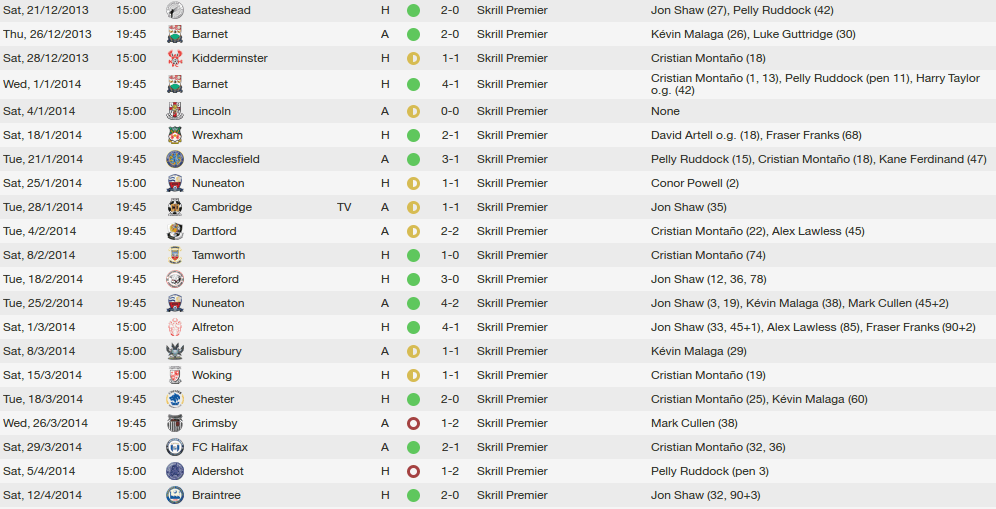 I couldn't have asked for a better debut season, what a year for us! It wasn't until mid-November before we suffered our first league defeat of the season, and we only lost four games. The players have been fantastic and have shown great character. Our total record for the forty-six league games was 26-16-4. In that incredible record, we scored 89 times and conceded just 40 times. I couldn't be happier with how we played, hopefully we can find some similar luck next season. 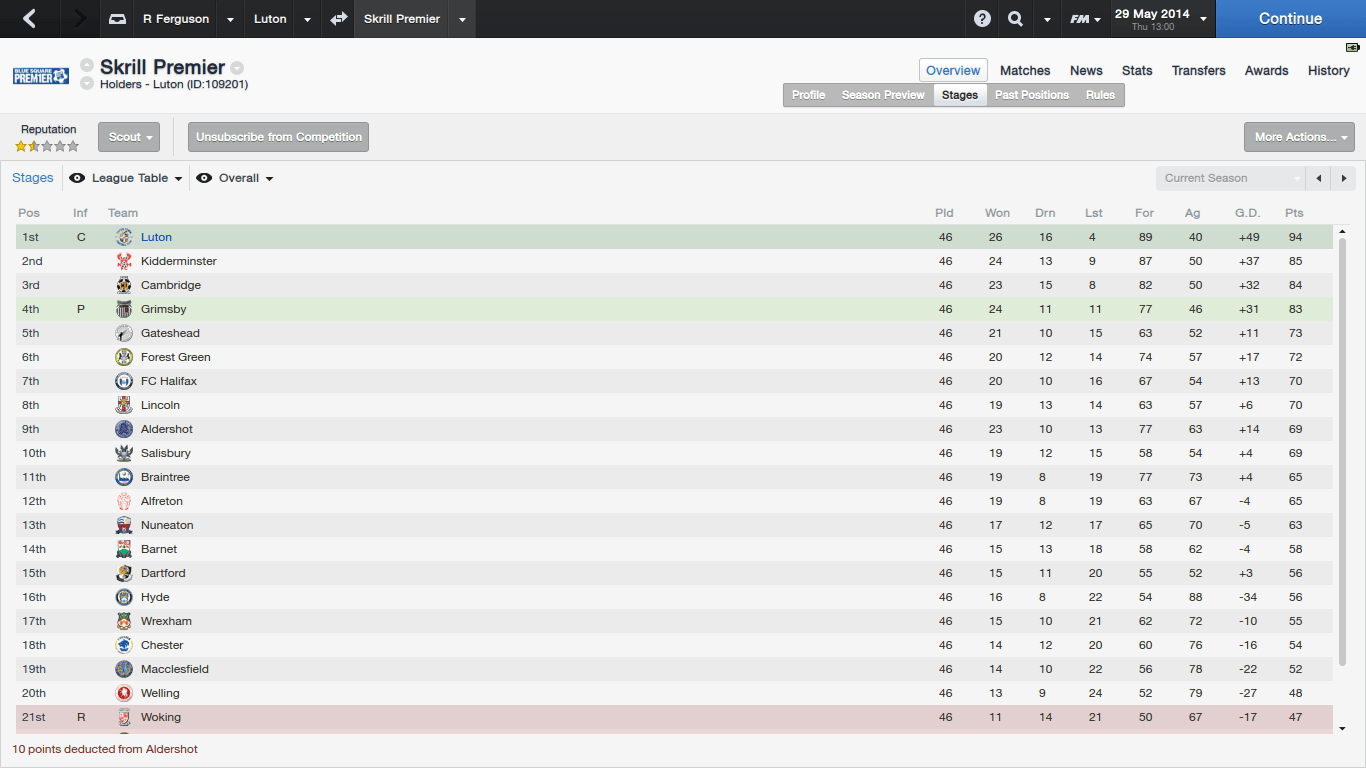 As stated before, we won the league by a very comfortable nine points. League 2 will be a different, much more challenging division, but I reckon we can survive, judging by our performance this season. I was proud to win Manager of the Year, and our players were challenging for the other awards, which was very pleasing. 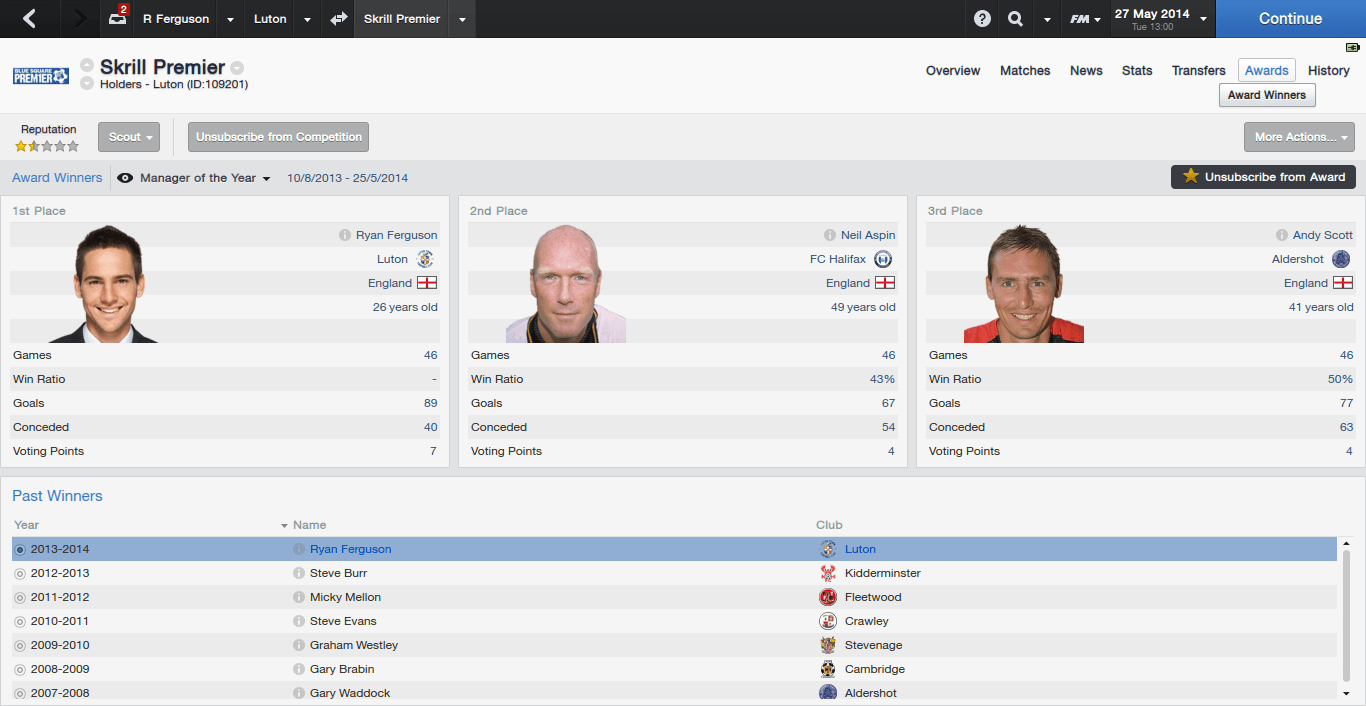 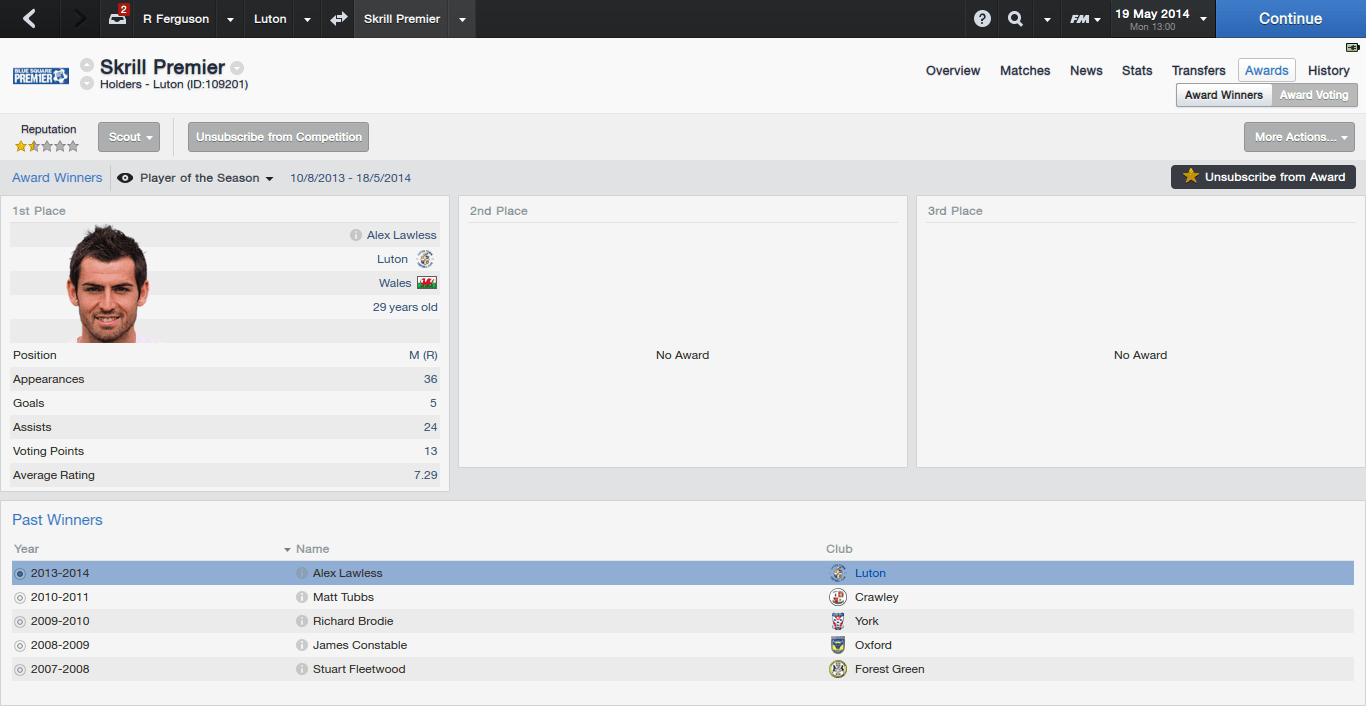 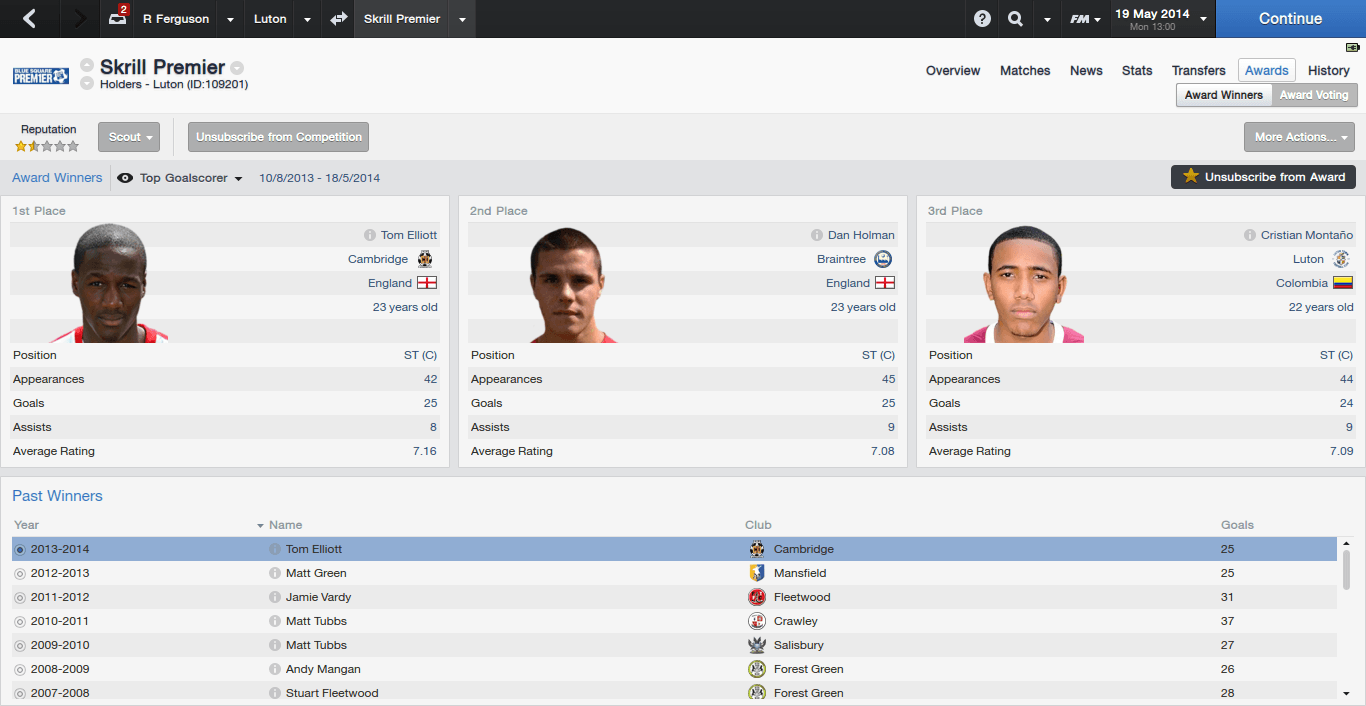 We did reach the First Round of the FA Cup, but we couldn't beat a League 2 Torquay side. I am pleased that we managed to take them to a replay, but hopefully we can perform better in "The Cup Of Dreams" next season. 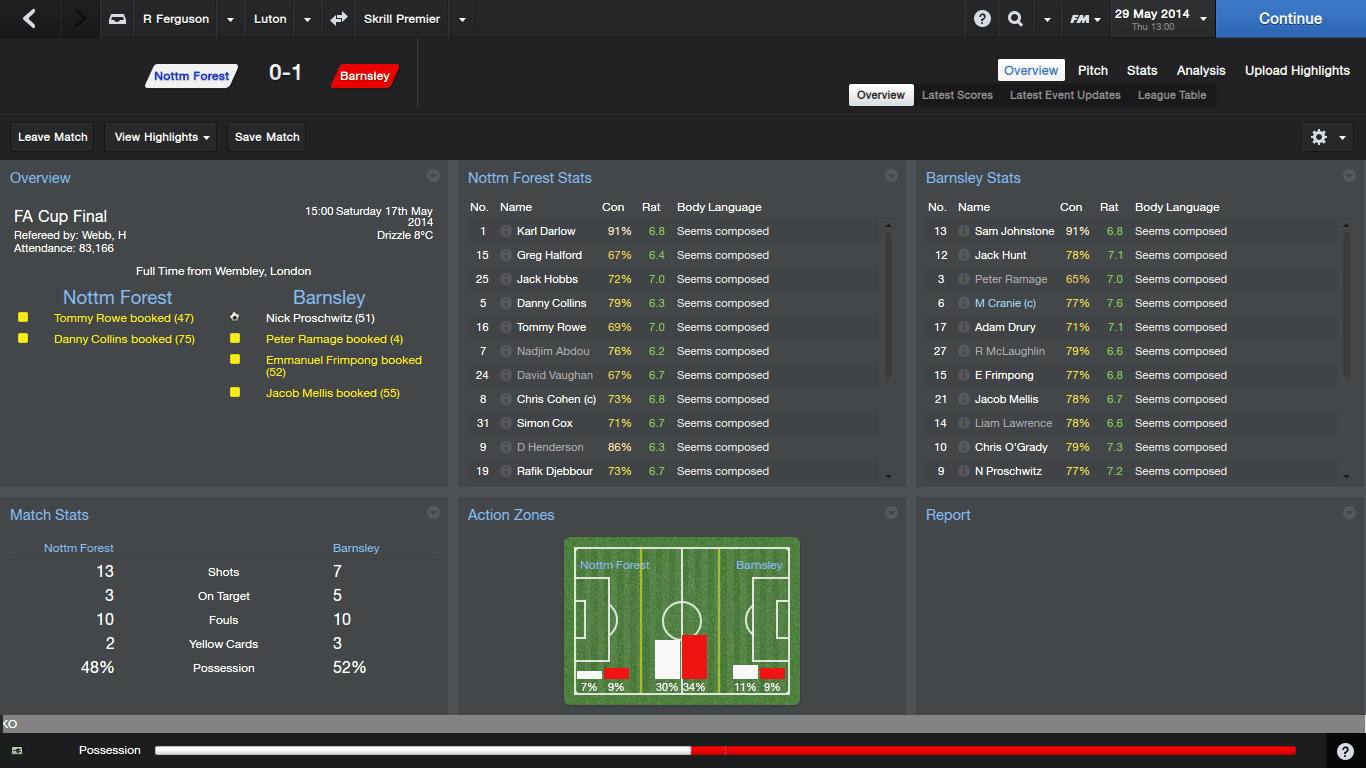 I couldn't have been any more delighted with our cup success! No team could stop us on our relentless run to win the trophy. I am proud of the team and hopefully we can go on to win more trophies at Wembley! 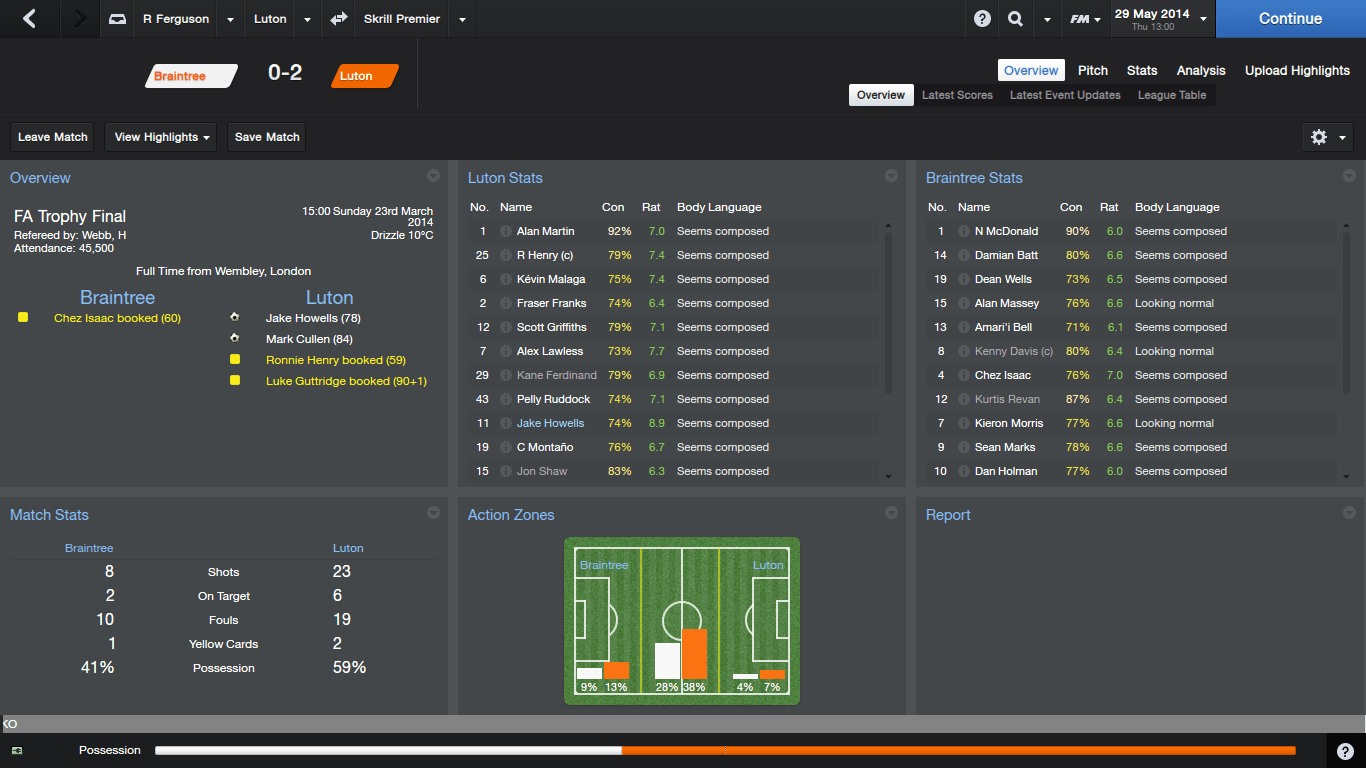 So that is that! My next post will be of my top five players of the season! I hope that you all enjoyed this season, give a big cheer to the kings of the Conference Leagues!

Neal
8 years
Not a bad season

Season One: Player Of The Season Luton Town had an absolutely tremendous season, but who were the best players of the year? In every team, there are stand-out performers, and Luton is no different. Here are our stars of 2013-2014: 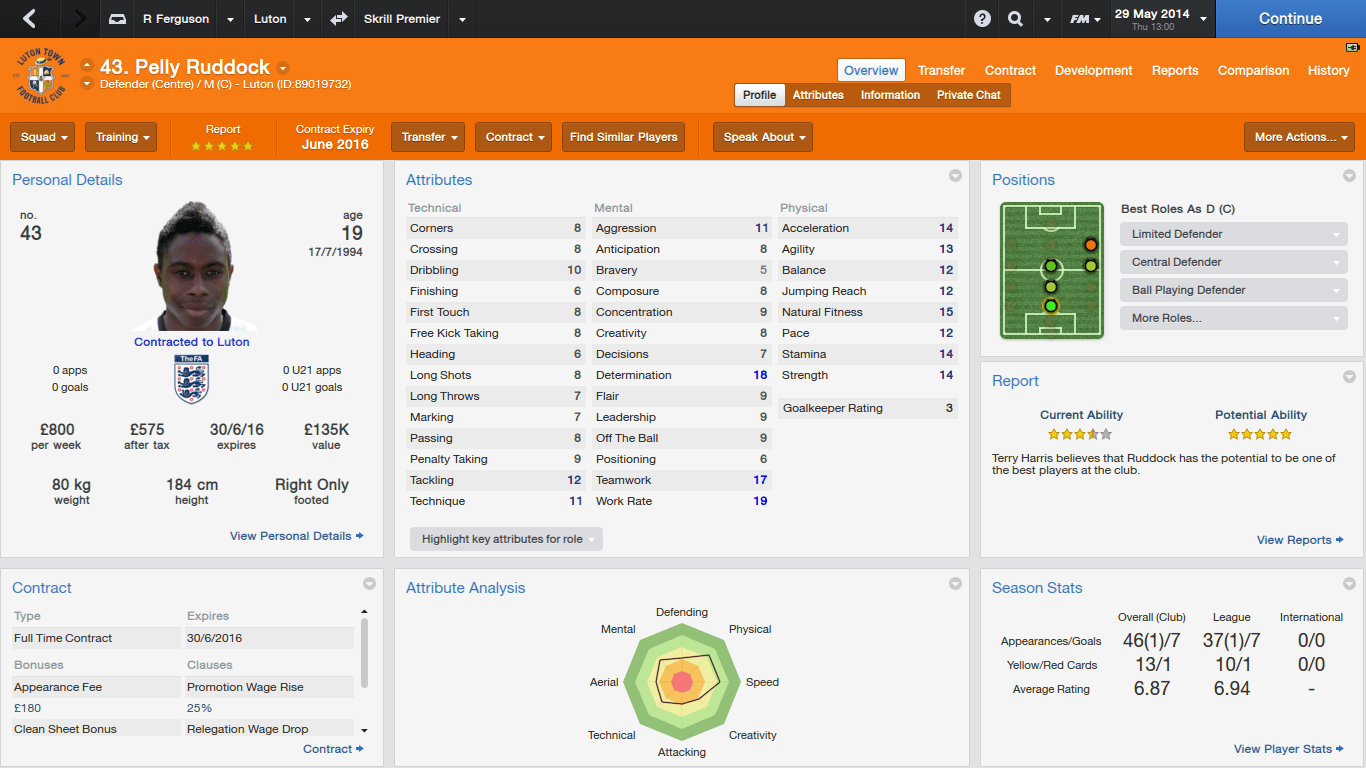 The young English defender has spent the majority of this season playing in midfield, while he develops his aerial ability on the training ground. He has been solid over the season, and he has scored his fair share of goals too. Hopefully he can grow to become a really good player for us in the future. 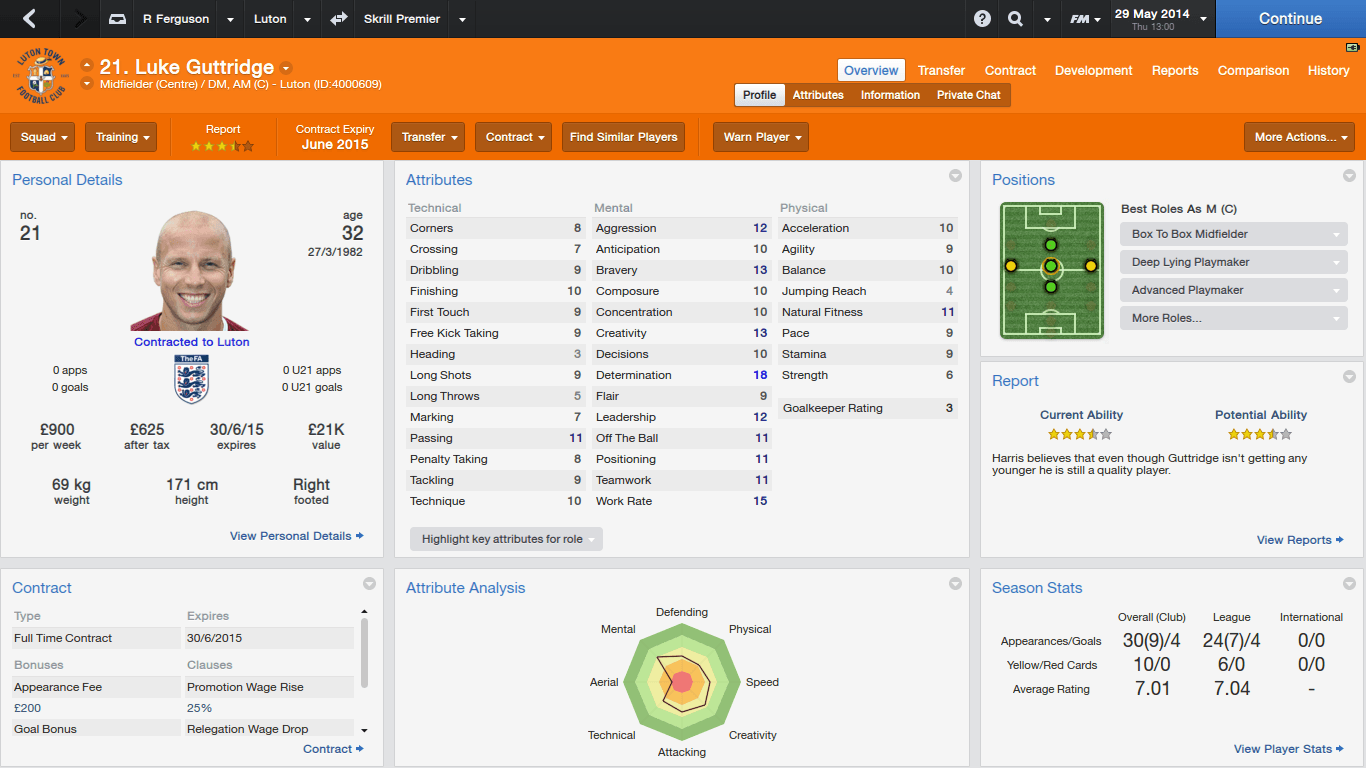 If anybody kept a level head throughout the season, it was Luke Guttridge. The experienced midfielder provided great encouragement and support for the younger players in the squad, and his consistency has been a huge plus for us. He has been great attacking and defending, and has made the headlines for match-winning performances on several occasions. 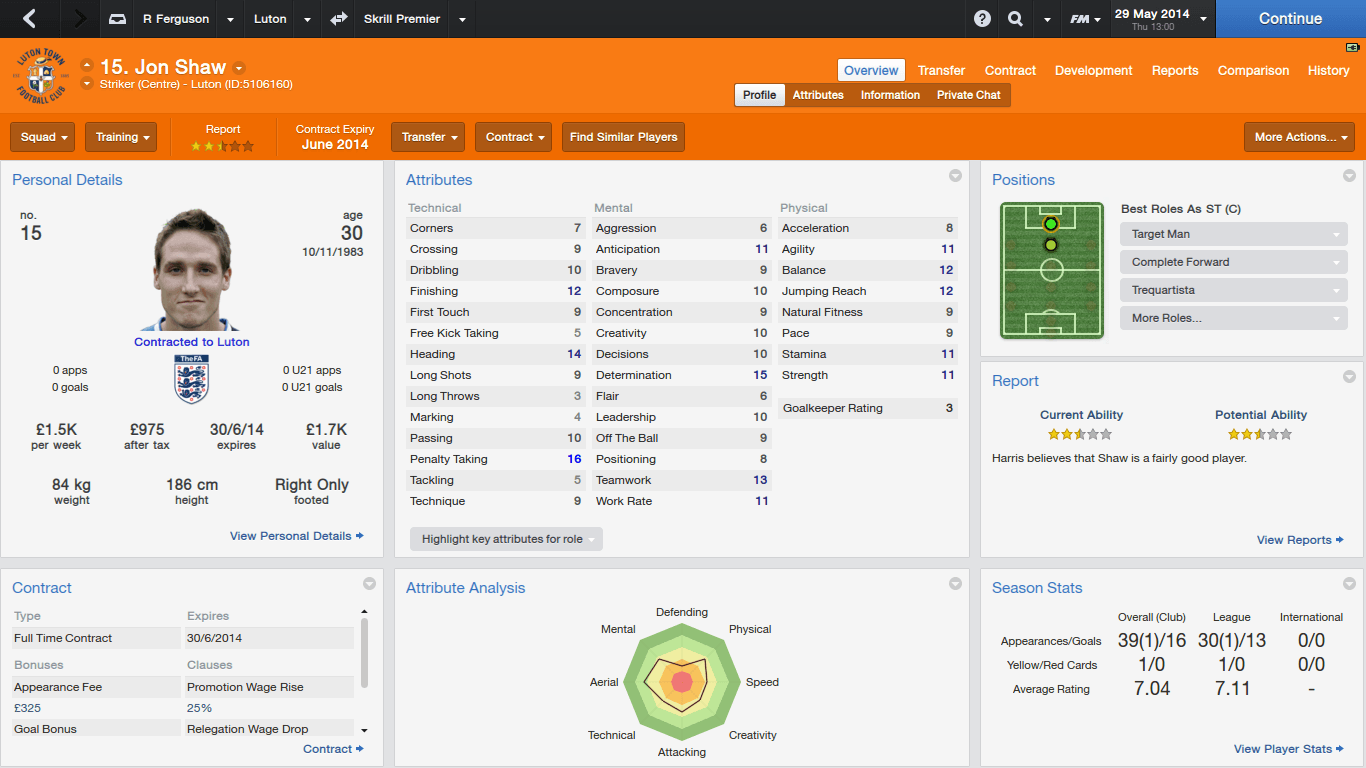 Despite wanting to commit his future somewhere else after this season, Jon Shaw was professional throughout the season and worked his ass off for the team. He scored some incredibly important goals, created a few and was a thorn in the side of our opponents. He will be missed next season, but hopefully we can rally on without him. 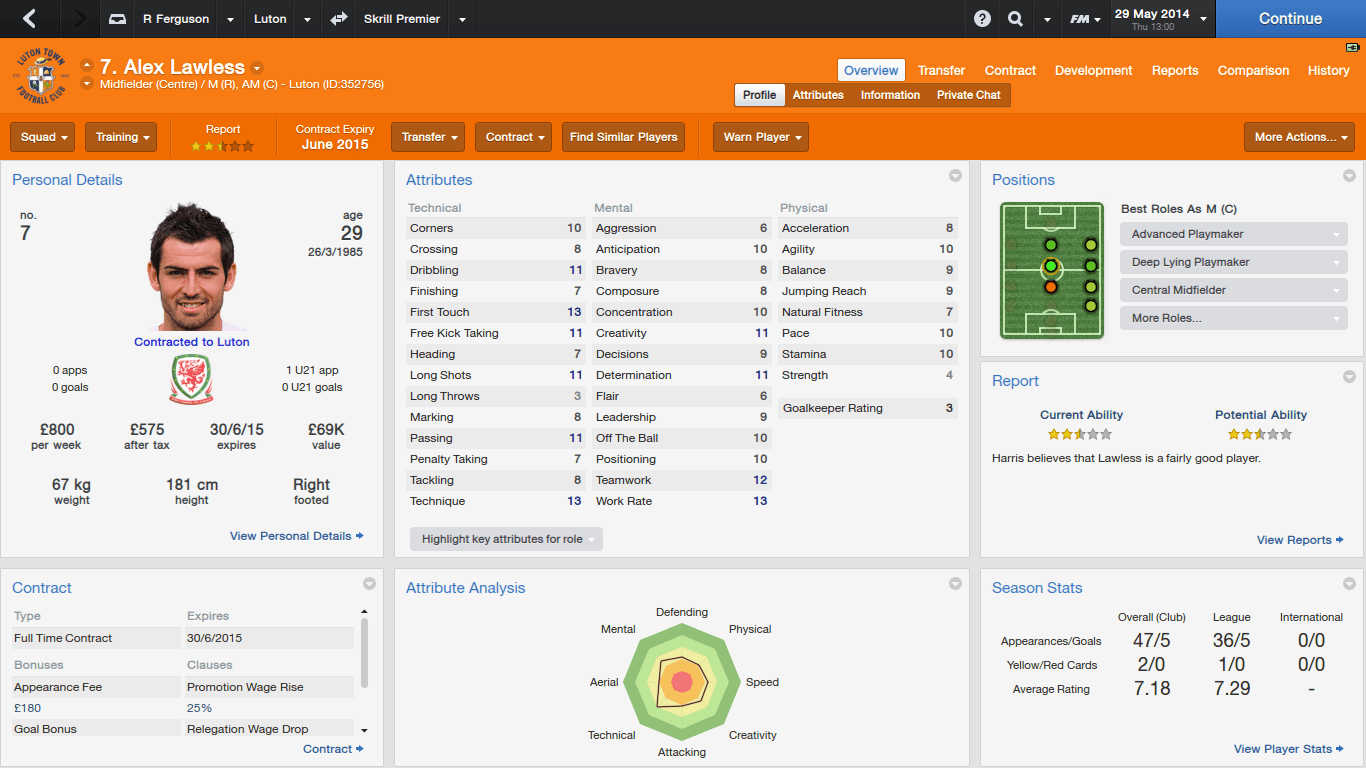 This guy has made such a huge difference for us. Naturally a centre midfielder, Lawless has spent the season on the right wing, and has done so admirably. His goal scoring and creating exploits have lit our season up and has helped us to get where we are. He has been such a creative player! 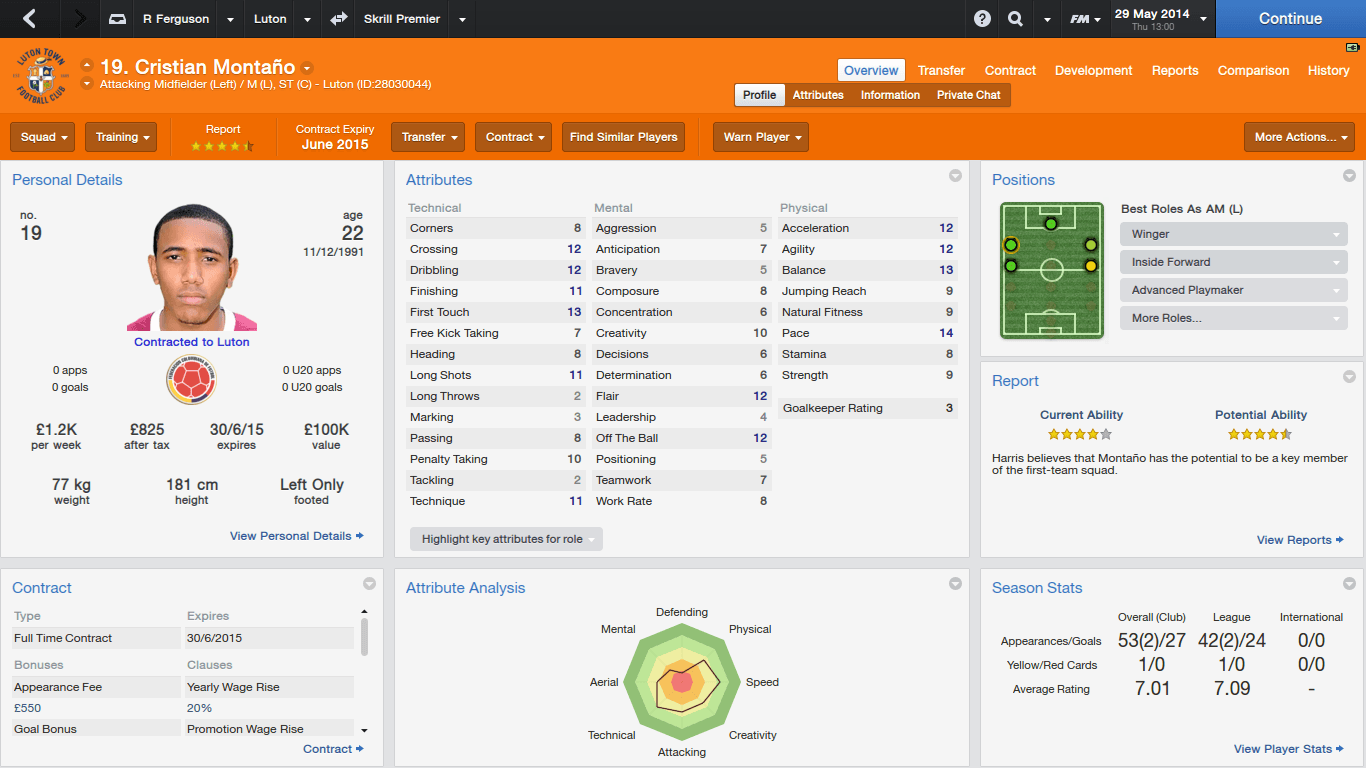 Who else could be our player of the season than this guy? Montaño has been in insane form since signing for us on a free transfer. He might go down as one of Luton Town's best ever players in the years to come. His creativity, his flair and his goalscoring ability have made him a priceless player for us. Hopefully he can produce some more magic for us in the future to further endear him with the Luton faithful!

So you now know who our stars were! Let's move on and see what happens in the future

Josh_MU
8 years
Great update and some amazing performances from your players! What a great signing Montaño was, hopefully he'll do just as well next season for you!

Thanks, I really hope he does perform like he did this season!

Ready To Take The Leap 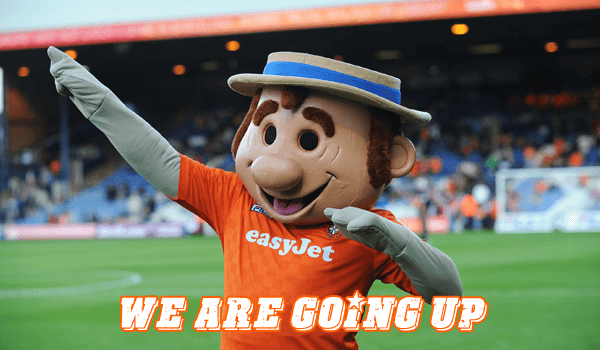 Ryan Ferguson: "I honestly don't know how to describe this season. No reporter in the world could tell you how amazing this season has been for Luton Town! We are so delighted with the giant steps which we have taken over the course of just this one season, on and off the field. The players are happy, the staff are happy, I'm happy, the board is happy, and the fans are happy. Not even a night with Mila Kunis would top this season, and I don't say that lightly!

Obviously we have to take all the positives from our play on the pitch this season. We have played some electrifying football this year, and two trophies this season backs that up. It has been five long years since we last one a trophy, but now we got two in one season! This season has been such an amazing ride on the pitch. The support which we got at each game has been sensational. The commitment from everybody involved with this club deserves praise. We deserve to be in the Football League, it is where we belong.

While the footballing world has pinpointed our exploits on the pitch, myself and the board have been involved in a lot of off-the-pitch work. We are investing money to develop the area around Kenilworth Road (Luton's stadium), and also in to public services within the town centre, such as restaurants, sports shops, gyms, book shops, and general stores. We aren't doing this for the club, well maybe we are a little bit, but it is all for the community. The people of Luton have given us such tremendous support, and it is time that we give something back to them.

The leap from Skrill Premier to Sky Bet League 2 is huge, in terms of playing quality. We are now entering a professional football league. There cannot be any form of complacency in any game through out the season. If we slip up, it could hurt us badly. But I have faith in my players. These guys have acted so professionally in the past, and I believe that they can perform in the Football League. It is by no means an easy task to secure our Football League status straight after promotion, as avoiding relegation will be a tough challenge. But I think, no, I know that we are ready to take the leap."


How does he become a professional footballer?

But then I saw him do this;

Josh_MU
8 years
Great update. I'm confident that your team will perform well in League 2, as you mentioned there is a huge gap in quality between both leagues but if your team can put together a good run, who knows what could happen..?
1
Login to Quote

Justice
8 years
edu1878, I probably shouldn't have released him!

Josh_MU, yeah a good run is all we need to get us going in League 2