LFC
6 years
What a shame

Will you look to sign a new striker now, or make do with what you've got?
1
Login to Quote

pompeyblue
6 years
That's disappointing as he has been incredible for you, hopefully you winning the league title can persuade him to stick with you

You need to make sure you win the league title though!
1

InvertedWingbacks
6 years
Thats agonising....is there a chance you could get him back on loan next season regardless?
1
Login to Quote

Justice
6 years
LFC, I'll wait until the summer and see what I can afford and who would be interested

pompeyblue, my only goal for now is promotion, anything else is a bonus

Jer
6 years
Euan Smith has screwed you over.. Best of luck in the League 1!
1
Login to Quote

Rablador
6 years
"a lucrative deal worth £450 per week", oh please Yooan, you deserve nowt!
Sad to hear, but I'm sure you'll find an even better replacement, and Smith will become just a scratched-out name on the matchday program

Justice
6 years
Pauker, I'm not there yet

Rablador, i will destroy his reputation


And it came down to just five games to decide where the league title would go, and who would win promotion. Could Luton Town secure promotion and claim a second league title in two years? Could we achieve what was previously thought to be impossible?

We knew at the start of April that three wins would secure us promotion. We claimed four wins, which means that we achieved back-to-back promotions, an incredible accomplishment! But was it enough to win the league? We had continued our form on from March and won the next three games on the bounce. At this stage, we knew we would be promoted. We were also three points ahead of second placed York with two games remaining, and we had a superior goal difference. We knew that one win from our last two games would secure us the title. Our first chance to secure the title came at Mansfield. However, it was not to be for us that day, as we suffered a 2-0 defeat. This meant that going in to the final day, we were leading York on goal difference and we had to equal their result to win the title. Plymouth were our opponents, at home, and we managed to pull back from behind twice in incredible fashion to earn ourselves the League One title! We were champions again, and in dramatic style! What a season it has been, and what a conclusion! 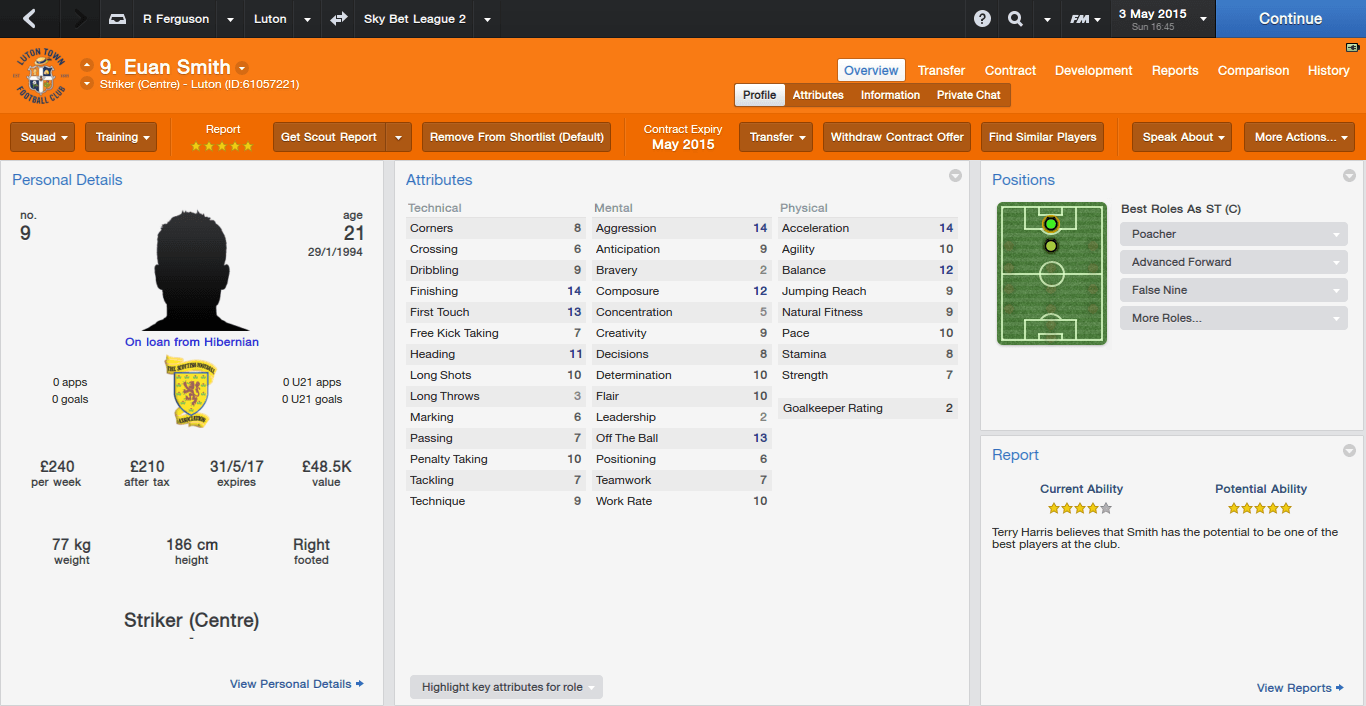 I'm sure you're all getting sick of his face at this stage, but it was Euan Smith who was our best player in the closing stage of the season. He scored a fantastic total of six goals in those five games to hand us the league title. He has been such an inspirational player for us, and it really is a shame that we could only keep him on loan. He will be missed at the Luton camp, that's for sure! 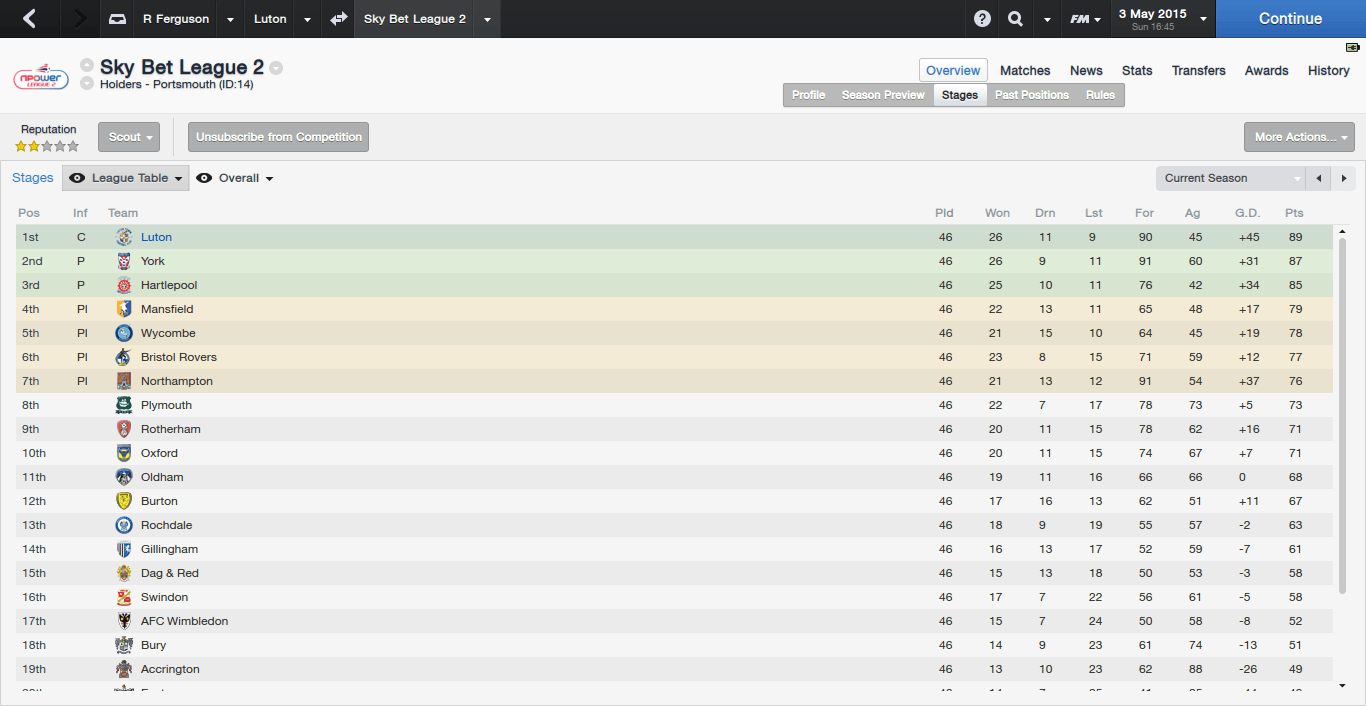 Well, there it is. The league has finished and we have won it once again! What an incredible achievement it has been, to win the Skrill Premier and get promoted, and then win League 2 the following season. This has been such a memorable season, for it's ups and downs. The play-offs for the fourth and final promotion spot are currently under way, you will find out soon who joins us in League Two.


Another season over and another trophy in the bag! Make sure you stay following for a season review, an overview of our five best players of the season and some very entertaining fictional pieces. Thank you for following this story, and although I am writing this update exactly ten days before you're reading this, your support has been incredible so far

cfcmarkt
6 years
well done on winning the league, but how did you lose against Mansfield.
1
Login to Quote

Rablador
6 years
Congrats on promotion/the league title! And dat 5-0 win, must have been a Grim(sby) day for the away fans...that was terrible, ik.

Barnet_Boyz
6 years
Wow, you have walked league 2. I bet I could get some good odds on three promotions in a row
1
Login to Quote

Josh_MU
6 years
Congratulations! Your Luton side are a force to be reckoned with. #Luton4Championship
1
Login to Quote

Jer
6 years
#Luton4ChampionsLeague, oh wait, is it too early for that :P? Btw Aaron, the WC in Justice's save is long but gone soo your comment is pretty much useless xD
1
Login to Quote