Stockport County boss Alan Lord has lead his squad into an immediate return to the Skrill Premier after a fantastic season with ended in promotion.

Times have been tough for Stockport County fans in recent years, but they finally have a reason to celebrate as current boss Alan Lord, who has been at the club for many years, lead the squad to a return to the Skrill Premier in the first time of asking.

Lord led his men to winning the Skrill North by 17 points after a sublime season, with club captain Phil Jevons scoring over 25 league goals and earning the golden boot, which aided County to promotion to the Skrill Premier for the 2014/15 season.

Jevons then signed a new contract after County's final home game of the season, which was against Harrogate and ultimately ended in a 1-1 draw, with Jevons scoring the equalising goal just before the final whistle, which signalled the County fans to invade the pitch. Jevons lead his team-mates in a fantastic season for the Hatters, scoring 25 goals which ultimately earned him the golden boot award.

Lord spoke highly about his squad's performance throughout the 2013/14 campaign and told local newspaper 'The Stockport Times' the following:

"I'm over the moon at the way the whole team responded after being relegated for a second season in a row as it's a hard thing to take knowing you've dropped down two divisions in two seasons, however they showed immense character and spirit which was a main factor to promotion this season."

"We're looking forward to next season undoubtibly, it'll be a tough battle to stay in that division but if the squad perform the way they have done this season, who knows what we can achieve."

County will have some re-building to do with their squad if they want to survive in the Skrill Premier, with teams such as Southend and Bristol Rovers been relegated and will pose the biggest threat to County surviving in that division, what County will do in the summer remains to be seen.

So as you can all tell, this is my new story. (Not another one!) I've decided to start this as I'm enjoying playing as Stockport and they are my local team.
Regarding my England story, it could possibly return, it's just that my updates are rather boring to write and I've lost interest in them.

As for my exams, they are still ongoing so this story won't be very active, as in updates everyday but I hope that doesn't put you off!

Hope you all enjoy!

Justice
6 years
Good luck Josh, I know this will be a good one!

fmhunter
6 years
Any Josh_MU story is a good one. Therefore, I'm an avid reader! Good luck

Josh_MU
6 years
@Jason, Justice and Fmhunter: Thanks guys! I hope you all enjoy this story, your comments are both very kind and motivating!
Login to Quote

County crisis as Lord has accident Recently promoted Stockport County have another crisis as current manager Alan Lord is rushed into hospital after a car accident on the M60.

Just as things were getting better for County, their manager Alan Lord was in a car crash which left at least 4 people with injuries on the M60, leaving County to look for an alternative manager for the upcoming season in the Skrill Premier.

According to our sources, the accident occurred at 9am on the M60, when a car in-front of Lord lost control and span clockwise into another car, in which Lord collided with and hit the rails to the right, causing a blockage on the motorway with both Lord and 4 others injured and trapped in their car.

Multiple ambulances arrived on the scene a few minutes later taking both Lord and the other 4 people to Stepping Hill hospital in Hazel Grove to receive treatment, luckily no one was killed in the accident but Lord suffered from many broken bones causing him to hand in his resignation to Stockport County. Lord's car (to middle) collided with two others causing the County manager to resign from his post.

County will now have to look for a new manager who will have the tough task of trying to keep County in the Skrill Premier after Lord guided the club back up to the division which they were part of in the 2012/13 season but they were relegated on the final day losing 4-0 to Kidderminster.

SkyBet have announced that the leading candidate for the job is former manager Jim Gannon, who took the club up to League 1 via in the play-offs a few years ago however both the club and Gannon have not announced anything currently, we will keep you up to date with any movement.
Login to Quote

Gannon: "I'm not interested in the Stockport County job after the way I was treated". Former Stockport County manager Jim Gannon spoke to the local press about being linked with his former club, in which he responded saying that he's 'not interested in the Stockport County job.'

As the search goes on for County to find their replacement as Alan Lord, who led them back to the Skrill Premier suffered from a car accident in which he was taken to hospital and was forced to hand in his resignation for health reasons, SkyBet had announced that former boss Jim Gannon was the favourite to take over.

However the Irish manager responded to that link in a recent press conference which he was invited to by many local journalists based both in Stockport and Manchester to try and get his opinion on the matter in which Gannon responded with the following;

"Working at Stockport was probably the best managerial career I've ever had. We got promoted to League 1 after an amazing display in the play-offs final, which is a day I will never forget, but would I ever go back? Not at all, not after the way I was treated by the chairman."

"We didn't have the best of times in League 1, I'll admit that and the board understood this, however I was never made aware of the financial difficulties the club was under, and they told me one day that I was relieved of my duties and I'd need to leave on the day, which I found very unprofessional and rude."

Jim Gannon lead Stockport County to League 1 after winning an entertaining play-off final against arch-rivals Rochdale which County won 3-2, with Liam Dickinson scoring the winning goal and took his team-mates up into League 1, which they throughougly deserved.

County will needed to make their mind up soon on the new boss so they have enough time to re-build the squad in the summer for the new 2014/15 season, and with Jim Gannon ruling himself out, who knows who County will speak to next?
Login to Quote

Good luck, looking forward to this

Josh_MU
6 years
@Alex, AAN and Cfc: Thanks lads, I'm really excited to write this one, hope you all enjoy!
Login to Quote

Bantams
6 years
Another superb start to things as per, wouldn't expect anything less from you

Good luck with the story and with your exams dude, you know i'll be following! A mystery man is set to become the new Stockport County manager for the 2014/15 season, which sources at the club have told us.

After Gannon ruled himself out of the running for the Stockport County job, there was yet more speculation about who was going to take the job after Alan Lord's car accident which forced him into resigning after taking the club back into the Skrill Premier.

But there was some news on the club's behalf at last in the early hours on Saturday morning, informing the fans that 'someone has been appointed as the new manager of Stockport County' on their official Twitter page '@SCFCmedia' which told us the following; 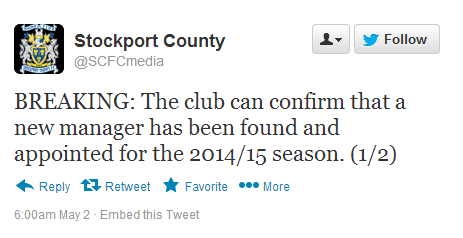 As the Twitter page announced, the club have founded and appointed their new manager, however they did not give any description on who it is whatsoever and informed us that the new manager will be meeting the media in a 'few days time'.

Who it is? We have no idea at all, so I suggest that we all stay tuned to the clubs official Twitter page linked down below to keep up to date on any news the club is able to bring us, but all I can say is that it's going to be very exciting to find out who the next manager will be.

As per usual, thank you for reading this blog post,

Good luck with the story and with your exams dude, you know i'll be following!

Haha thanks man, you've always supported my stories so I really appreciate your comment! Thanks also for wishing me luck with my exams, I'm gonna need it..