Viktoria Plzen and Dynamo Kiev have been handed tough draws in the Champions League against bayern Munich and champions Barcelona.


Victors over German side Bayern Munich at the Estadio Da Luz in the 2013-14 final, Barcelona's bid to retain the trophy continues against Czech champions Plzen who were expecting a tough draw after finishing second in Group F.

Atletico Madrid, who finished second to Manchester United in Group D after stunning the English side with a 3-2 win in the last group game, have been given a tough match after being paired with English giants Chelsea, and will have to stop Cesc Fabregas if they are to have any chance of progression.


Dynamo Kiev have a tough trip to Munich, while Newcastle United were drawn with a much easier tie against Greek outfit Olympiakos.


Real Madrid are targeting an 11th European Cup and must get past Juventus, while Manchester United are in Portugal to meet Benfica, Dinamo Moscow face Marseille knowing a solid result in France will go a long way to securing passage to the next round.

UEFA Champions League round of 16 draw

Griffo
5 years
Perfect draw for you, easy match up and two fixtures where big sides play each other.
Login to Quote 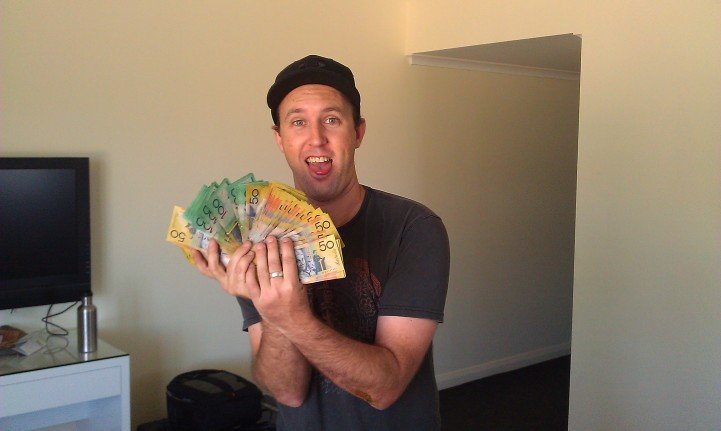 Steve seen posting this picture on his Instagram flaunting the winnings

She told BBC: ‘My friend had just put a bet on Newcastle to beat Bayern in the seoond group game but i thought id go one further,


Remarkably, Steve admitted that he had not even watch the games against Napoli, and only realised he had a chance of winning the bet shortly before the second match between Napoli had ended.
he said: ‘I wasn't actually watching the game – I’d turned it off - and realised 10 minutes before the end.
‘It was unbelievable.
‘I’ve just moved out of home, and i need a new car, so this will go toward that. I want one before my 28th birthday in January.'


Upon discovering his win, he tweeted: 'Oh my god i cant believe ive actually won this bet, it was all for shits and giggs because i thought we would get hammered, oh my god oh my god.'
Login to Quote

Coxy
5 years
You're laughing drawing Olympiakos! After smashing your group you should easily advance! Thats a big punt from Steve by the way

Beers are on him!
Login to Quote

Neal
5 years
Brilliant bet for that lad, and even better to see you top your group! And Griffo, yes it does

Newcastle boss David Ginola was sent to the stands, as United claimed a comfortable victory.

Ginola clashed with Sean Dyche after the Burnley manager man handled a United player as he went to retrieve the ball to take a throw-in.

Neal Maupay made it 3-0 on 18 minutes before Curtis Davies's header got Hull back in it, but Ben Mee scored an own goal just after the restart to end Burnley's hopes of a comeback.


Newcastle had gone three games without defeat,but this fourth consecutive success was overshadowed by the actions of their manager.


The pair came together, with Ginola pushing his head into the face of the Burnley manager. A melee followed and, after the crowd was dispersed, Dyche was given a wanring but Ginola dismissed.


That the stupidity of their manager - who later apologised - will take the headlines is harsh on a Newcastle side that capitalised on the errors of their visitors to earn a win and jump back to third on the table.

Decemeber began with Tottenham travelling to St James Park, Tottenham were favourites for the match despite United's great form, but that favourites tag meant nothing to Ginola's men as Hatem Ben Arfa and Layvin Kurzawa scored either side of halftime to give the Toon Army a comfortable 2-0 win


next up was run away leaders Manchester United at Old Trafford, Manchester United controlled the match from the outset and took an early lead through Robin Van Persie, it was all plain sailing from there as Newcastle United could only muster 4 shots the whole match, only one of those being on target. this win moved Manchester United 8 points clear at the top


Sunderland was next, and the Tyne-Wear derby. Neal Maupay put Newcastle United in the lead early, before Fabio Borini levelled on 22 minutes, Remy Cabella did give the home side a two goal buffer again just before halftime as he scored a beautifully placed shot from outside the box, Cabella scored his second for the match on 59 minutes to give Newcastle all 3 points and their third straight win over Sunderland


a comfortable 3-1 win over Everton followed with goals Moussa Sissoko, Grenier and in-form midfielder Remy Cabella. Grenier scored in the 90th minute to give Newcastle United the lead, before Cabella scored a minute later to secure all 3 points


the festive period ended with a dull 0-0 against Swansea City, both sides looked fairly tired going into this match cause of the crazy schedule which had seen both sides play 3 matches in 8 days. so a draw wasnt seen a poor result

I would call December a success, we only lost one match and that was to Manchester United, but at this stage everyone is losing to the Red Devils, we took 13 points from a possible 18 which has seen us stay in the top 4, the inevitable drop from Cardiff City has started

Griffo
5 years
Showing good form but the big clubs still clearly on top, what are you going to do in an effort to bridge the gap?
Login to Quote

You are reading "Newcastle United - The French Revolution".