Denzy
5 years
Just gave this a read and you're doing very well, Keep it up in the league and let's hope in Europe you can give the big boys a good run again
Login to Quote

sieninen
5 years
Denzy : Let's hope so! And thanks for checking this out

Justice
5 years
A tough loss to take against HJK, but there is still plenty to play for!
Login to Quote

MisterLister
5 years
You were really unlucky against HJK but other matches are great so, I think you will continue it this fashion!
Login to Quote

sieninen
5 years
Justice & MisterLister: Unlucky against HJK as usua, they seem to be clinical in their finishing every time against us


JJK have continued their games in the Finnish Premier League as well as moving forward in the Europa League qualifying rounds. How did they do? 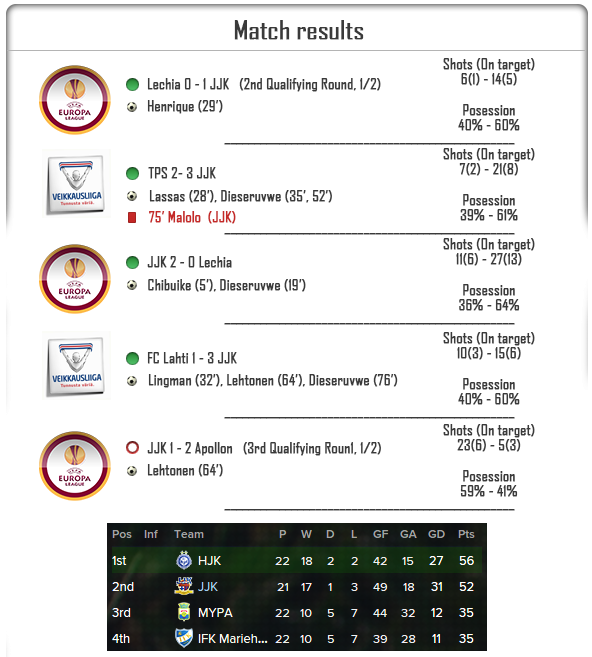 JJK still having problems
JJK have improved in their goalscoring but at the same time they have been creating less chances than in their glory days. Mr. Shroom has a lot to think about as JJK will have a tough tast ahead of them at Limassol in the second leg of the EC 3rd qualifying round.

"We really thought that this would be an easy draw but clearly we were wrong. Our form has improved in the Premier League but we are still struggling to create chances despite having a lot of shots on goal. I will have to adress our tactics." - Mr. Shroom

On the other hand Emmanuel Dieseruvwe has been in good form bagigng in four goals over the last five games including a brace against TPS.


IN OTHER NEWS!
Only half a year left until JJK move to a new stadium!
JJK B squad player Jarno Hevonkorpi makes a permanent move to First Division side Ilves for a fee of 11 250€, which may rise up to 30 000€.
Dieseruvwe is still the top goalscorer in the FPL with 18 goals in 21 appearances.
Login to Quote

Justice
5 years
Well, you're so close to HJK with a few games remaining but that European second leg will be a huge clash. You need to score at least two goals which won't be easy. Go all out attack or play it safe, either way it will be a huge game for JJK... good luck!
Login to Quote

sieninen
5 years
Justice : HJK have been in great form recently but I think we'll be fine and shoulb be able to catch up and overtake. The second leg will definately be difficult as we have a couple of vital players out with injury, let's hope we can make it.
Login to Quote

Lynchy
5 years
Read through all the story just now and it was a fantastic read! Your posts are clear and make you want to read more! Can't wait for next update keep it up!


JJK had to face Apollon away after a disappointing 1-2 defat at home. It was do or die as the Finnish giants are facing a season without a European group stage for the first time in three seasons. Could they manage to go through?

JJK unfortunate in defeat at Limassol
JJK continued to struggle with finishing their chances away at Limassol. It started as good as possible with Aleksis Lehtonen scoring on the third minute. After that it was all downhill as Apollon parked the bus and managed to go thtough on away goals despite JJK having 22 shots, with only 8 on target though.

"I really had faith that the guys could turn this around. The whole club is extremely disappointed an morale in the dressing room is low, which we'll have to manage carefully now." - Mr. Shroom

The only good thing to come out of this is that JJK can now concentrate on winning the Finnish Premier League, even though they are also in the Finnish Cup Semi Finals against MYPA.

"Unless we play an exceptional last third of the season there will be major changes next year. I can promise you that." - Mr. Shroom

As attacking midfielder Lucas Lingman is trying to force a move back to title holders HJK changes might be inevitable even sooner than JJK manager Wild Mushroom is wishing. HJK are reportedly ready to pay over a million euros to get their former youth prospect back to the club.
Login to Quote

Justice
5 years
Unlucky to lose out on away goals. Playing in a new stadium will certainly be a boost and may provide you the leap needed to become a dominant force in Finnish football!
Login to Quote

sieninen
5 years
Justice : The new stadium should really boost our showings in Europe as we haven't been able to play et our stadium so far. Hopefully the new stadium will be large enough, if it's not I'll just expand straight away

But now we cry since Dieseruvwe is out for 2 months

JJK concentrate on the FPL


In the fixtures following the disappointing second leg at Limassol JJK had a total of four league games as well as the Cup Semi Final. Let's see how they managed! 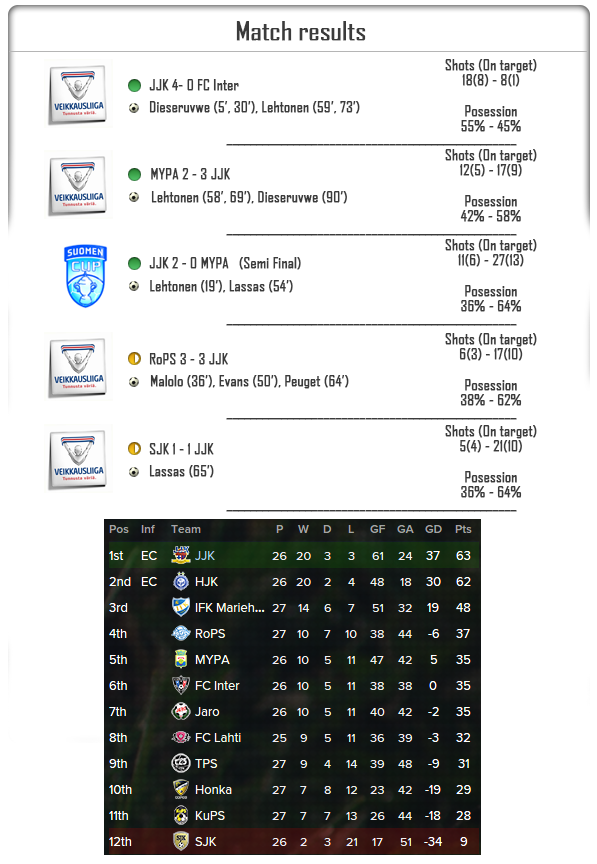 JJK finally overtake struggling HJK!
Even with the two unlucky draws JJK have managed to return to the top of the FPL table. The hard work now begins as they will try to hold that position for the remaining seven league games, one of which is against rivals HJK.

JJK to play HJK in the Finnish Cup Final!
It is surely going to be a Final to remember as the two giants of Finnish football clash horns in the Cup final as well as in the League. Things are already getting heated with the transfer window open and both sides looking to sign players from each other!

"Itäs going to be an entertaining two month period. HJK have so far managed to beat us on both occasions this season but we are more than determined to retain our Cup title as well as retake the throne as questionably the best team in Finland via taking the FPL title back to Jyväskylä." - Mr. Shroom


IN OTHER NEWS!
Login to Quote

Justice
5 years
Back on top, that's more like it! The domestic treble could become a reality, good luck!
Login to Quote