MJK46
6 years
Hopefully you can continue this run and even get a chance at a Champions League victory. Allez OM!!
Login to Quote


Thanks mate, was a long season haha!

Haha thanks mate, was a very close call but thank god we did it!

2016-05-16 21:17#231796 Jack : Ocampos not winning Player of the Year after the most goals and joint most assists really goes to show the senior talent in your squad as well as younger talent!

Yeah Ocampos was a fantastic player this year but Dembele winning it does show how good this squad is, at least for a Ligue 1 club that's not PSG!
Login to Quote

Cheers mate, you beat me to it but we're there at last

AS Monaco have ended their season on a high after beating the Coupe de France holders, FC Lorient in the Final at the Stade de France to win their 6th Coupe de France title. The win in the final is the club’s first since 1991, ending an almost 30 year wait for the Coupe de France title. Leonardo Jardim’s side took the lead in the 7th minute in a frantic final as Ayoze Perez, scorer of 31 goals in Ligue 1 this season knocked the ball down to Jordan Amavi whose swift run into the box saw the full back knock the ball home on the half volley to put Monaco in the driving seat. Amavi had doubled his side’s goal tally and his own personal goal tally in the final within 3 minutes as Ayoze Perez assisted yet again with a mazy run into the area before pulling the ball back to the full back who slotted home to make it 2-0.

In a tense second half it was Lorient who scored the first goal in the 77th minute as a fantastic free kick by Vincent Pajot was met by the head of Majeed Waris who sent a bullet of a header shooting past Subasic to pull a goal back for Lorient. However Monaco replied almost straight away as Pachola delivered a fantastic through ball to Allan Saint-Maximin who rounded the goalkeeper and slotted the ball home to secure the trophy for Monaco as they moved 3-1 up and managed to wrap their hands around the title for the first time since 1991.

Haha the orange fish club... I love it

Jordan Amavi is coming of age!
Login to Quote

Departing Olympique de Marseille manager Christophe Galtier has been named the Ligue 1 manager of the year after guiding his L’OM side to the Ligue 1 title for the first time since the 2009-2010 season. The manager has already confirmed that he is leaving the club at the end of the season and the award will no doubt cap off a fantastic final season at the club for the former Saint-Etienne manager.

Griffo
6 years
Now I won't see FC Lorient as anything other than the Orange Fish club... bahahah well done on all your success MG!
Login to Quote

Haha someones confident in their abilities as a manager 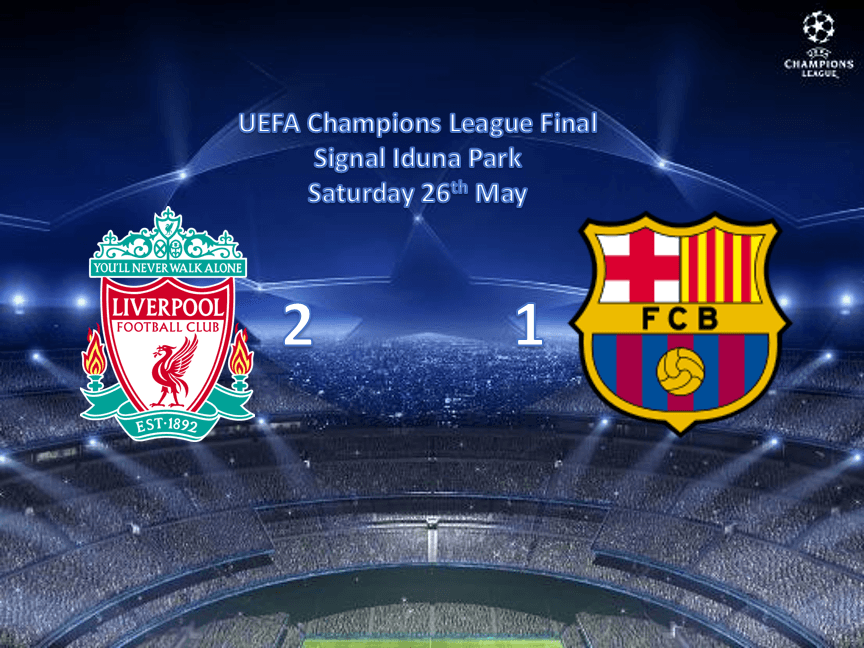 Liverpool have secured their sixth European Cup/UEFA Champions League Title after beating favourites FC Barcelona 2-1 in the final at the Signal Iduna Park in Dortmund, Germany. It was also a German who opened the scoring for the Red’s as Joe Allen slipped a fantastic through ball to Andre Schurrle who received the ball and fired a powerful effort into the far top corner to give Liverpool the lead. 5 minutes later Roberto Mancini’s side had doubled their lead as Francis Coquelin floated a free kick into the penalty area, which, after a goal mouth scramble, fell to Nathaniel Clyne who tapped home to make it 2-0 and give Liverpool one hand on the famous trophy.

The second half was different though as Barcelona piled on the pressure in search of their sixth European crown and after 52 minutes they had pulled one goal back as Ivan Rakitic slipped a fantastic through ball in to the penalty area. Lionel Messi ran onto it and dinked a lovely ball over the oncoming Simon Mignolet to pull a goal back for Barcelona. However it wasn’t enough and the game ended 2-1 and it was the passionate Scouse supporters who celebrated long into the night as their team lifted the famous trophy for the 6th time.

Haha its rather ironic that this update ended up being posted after last nights shenanigans!
Login to Quote