A fantastic final at the Stade de France, has seen Paris Saint-Germain lift the Coupe de la Ligue for the second time in three seasons. However it didn’t all go PSG’s way as the first half was played out in a tight fashion with the scores level at half time at 0-0. The breakthrough wouldn’t come until the 78th minute when Lucas Moura went on a mazy run all the way through the Lyon half and chipped the ball from the by-line to find the oncoming Alvaro Morata who headed home to give Zinedine Zidane’s side a 1-0 lead.

Just when it looked likely that PSG were headed for the trophy though, Alexandre Lacazette temporarily rescued the tie for Lyon as Nabil Fekir flicked on a late Clement Grenier corner, to find the in form striker who volleyed home to level the tie again and take the game into extra time. However in extra time it was to be PSG who broke Lyon hearts as Bruma received the ball from Edinson Cavani before playing a fantastic through ball to the Uruguayan forward, before the former Napoli and Palermo player fired past the Lyon keeper to secure the Coupe de la Ligue Final. 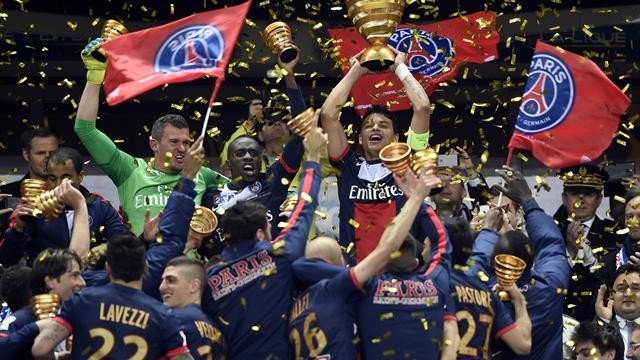 Yeah its unfortunate for Lyon


Well it's a shame he manages Marseille then


Well it's a shame he manages Marseille then

Hahaha I didn't notice that, but in his defence, the pain of Lyons defeat was felt across the whole of France

Andrea Belotti
After their Champions League exit at the hands of Barcelona in mid-week, Marseille were handed another cruel blow to their chances of silverware this season as Saint-Etienne delivered a cruel lesson to the home sides defenders. It took just 10 minutes for Saint-Etienne to take the lead as Romain Hamouma cut inside before slipping an easy through ball to Andrea Belotti who rounded Brice Samba and slotted the ball home. However Marseille were level again just 4 minutes later when Brice Dja Djedje played Lucas Ocampos free in tonnes of space, who then delivered an inch perfect pass to Florian Thauvin with the on loan winger slotting home to make it 1-1. The scores remained the same until the second half when in the 58th minute Saint-Etienne took the lead again as Loic Perrin gave the ball to Borja Lopez to clear. The Spaniards clearance was poor though as it went straight to Romain Hamouma who delivered the ball on a plate to Belotti who smashed the ball in from an angle to restore Saint-Etienne’s lead. In the 70th minute though a beautifully flighted free kick by Romain Alessandrini and an error by Stephane Ruffier allowed Marseille to pull themselves level again as the set piece flew into the back of the net. However more poor defending from Marseille’s defence again allowed Saint-Etienne to take the lead as Henrikh Mkhitaryan to slip a delightful through ball to Belotti who chipped over the onrushing Brice Samba to finish the scoring at 3-2 to seriously dent Marseille’s title chances.

Florian Thauvin
With their title chances hanging in the balance, Olympique de Marseille secured a vital victory in a game they could ill afford to lose, by beating a resurgent Bordeaux side to close the gap on table toppers Monaco to just a point. However much like in the game against Saint-Etienne, it was poor defending that allowed Bordeaux to take the lead as Auzqui crossed the ball deep into the Marseille half to allow Haris Seferovic to head home. However in a dramatic seven minutes that followed Marseille equalised and took the lead as they secured the victory. The equaliser came after 21 minutes when Auzqui played a poor pass that was intercepted easily by Mario Lemina. The Gabonese midfielder slipped the ball to Tiemoue Bakayoko who sprayed the ball out wide to Florian Thauvin whose diagonal ball found Lucas Ocampos ith ease and the Argentine winger volleyed home to level the scores at 1-1. Just 3 minutes later Michy Batshuayi assisted Thauvin in getting Marseille in front as he headed the ball on from an Ocampos cross, to Florian Thauvin who took a touch before driving the ball past the Bordeaux keeper to give Marseille a vital lead and really put the pressure on league leaders Monaco.

Mousa Dembele
Olympique de Marseille recorded back to back victories for the first time since the end of February/beginning of March to keep up the pace with Ligue 1 leaders AS Monaco. With the title race reaching its final stages, Munir El Haddadi’s goal in the 42nd minute, after Mousa Dembele had sprayed the ball out wide to Benjamin Mendy, who then delivered the ball on a plate to the Spaniard, was enough to seal the three points for Christophe Galtier’s men. AC Ajaccio offered little for the rest of the game and come the 90th minute it was Marseille who were celebrating a precious victory that keeps them only a point behind Monaco with just two games left. 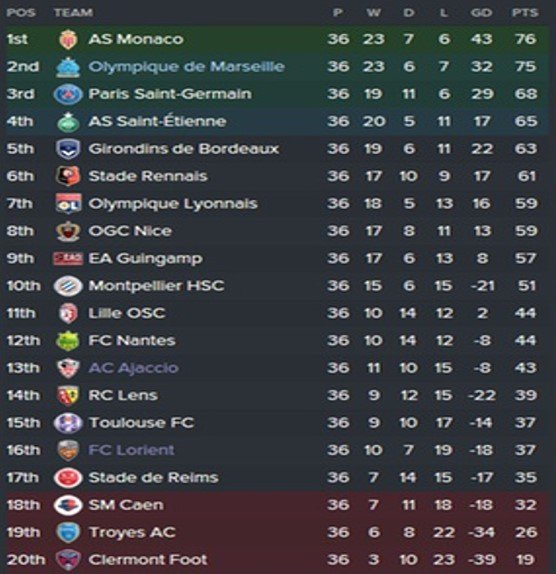 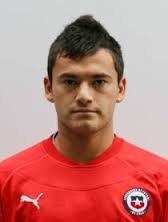 
In a month where we really needed players to step up and play for their place in the team, the Chilean midfielder has stepped up to the plate and delivered a 7.9 rating over his appearances. Has been given a chance due to injuries to players such as Dembele and Lemina and has been extremely impressive and has showed me why he perhaps should have played more this season.


A worrying month that started with a poor result against Saint-Etienne off the back of that defeat to Lyon. We were really poor defensively against Saint-Etienne and they thoroughly deserved to take the three points. Honestly at that point I was thinking that Monaco would run away with the league title but their draw against Nice and our victory over Bordeaux has really heated things up. We’re still only a point behind them in the race and they have to play Lyon and Saint-Etienne as their final two games so if they slip up and we take full points from our remaining games we will have done enough. As for the Champions League, to lose the way we did against Barcelona was excruciatingly painful as the goal came after the minimum of 2 minutes added time but that’s football and it will work out for us in our favour sometime. We’ve qualified for the Group Stages again for next season and hopefully whoever replaces me at the Stade Velodrome will be able to do a good job in guiding this team out of the Group Stages and into the Knockout Stages again. Hopefully this time next month we will have won Ligue 1 after two impressive results against Lens and Nantes in our final 2 games.

Justice
6 years
That Belotti hat-trick has put Monaco in the driving seat, but anything can happen in 180 minutes of football!
Login to Quote

Jack
6 years
It's going down to the wire! What a win if you can pull the title win off this season!!
Login to Quote

He was completely unplayable and Monaco are firmly in control of this now!

Yeah just hope that we can bounce back completely and snatch the title!

It really is, but its going to be nerve wrackingly close!
Login to Quote

Joris Delle
Olympique de Marseille returned to the top of Ligue 1 with another 1-0 victory, this time against RC Lens after Munir El Haddadi struck home in the 41st minute. With Monaco losing against Lyon, Munir’s placed effort in the 41st minute after he had been played in by a fantastic back heeled pass by Lucas Ocampos was enough to seal the three points against Lens. The result meant that should Marseille beat FC Nantes on the final day of the season they would be crowned champions of France for the first time since 2010. 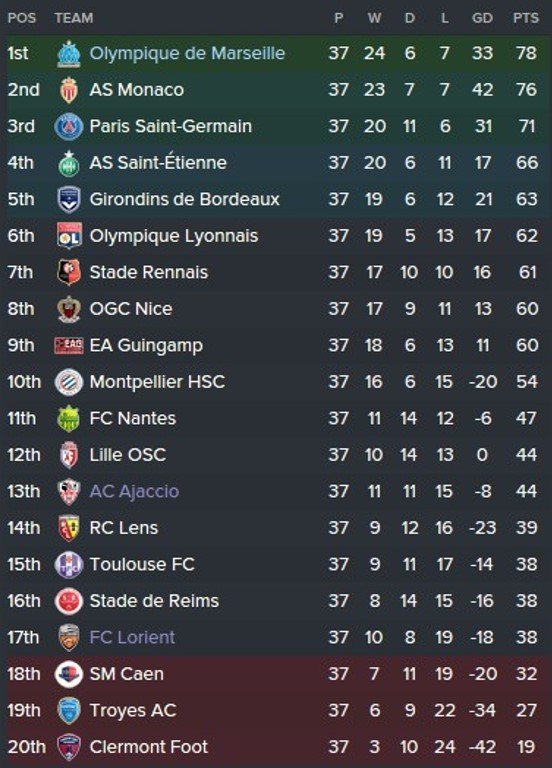 
What a beautiful sight that table is and if we can win next week then that table will stay with us at the top for the rest of time. We are one win away from becoming champions and after the disastrous form we seemed to be heading towards at the start of last month, to be sitting here with only one game left, one win needed it is brilliant. We have been excellent since the game against Saint-Etienne and although we might not have won the games 3-0, 4-0 etc. we have been brilliant, grinding out the results, whilst Monaco have slipped up that have put us in line for our first title since 2010. Hopefully we can win it as my parting gift to the fans, and I sincerely hope we do because we deserve it the way we have been over the last couple of weeks. Fingers crossed!

MJK46
6 years
That next match will be HUGE. Don't screw up
Login to Quote