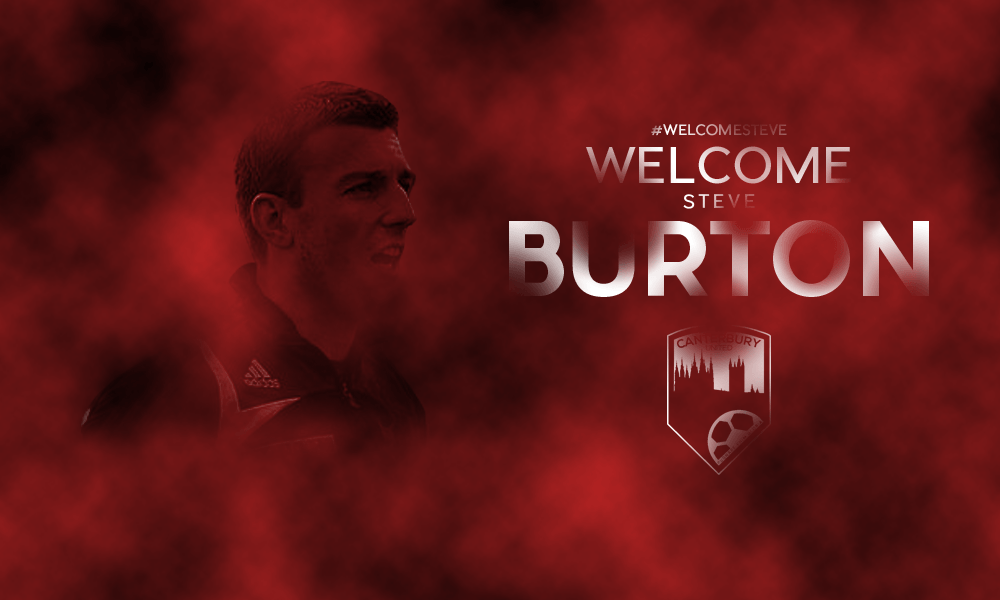 Canterbury United are delighted to announce the capture of Steve Burton on a free transfer.

The 32 year old Englishman has penned a one year deal with the Bishops, and will be looking to displace preseason regular Francis Ibeh in the first eleven.

Steve Burton:Canterbury United are a club that’s going places, and I want to be a part of that project. Even if I stay here just for a year I want to make a big contribution to the side and help them win promotion or maybe challenge for the cup later in the season. I am honoured to be here and wear this shirt.

He then packed his bags and moved to sunny Australia, where he played for Richmond Kickers and Green Gulley, who play in the National Premier Leagues Victoria. He spent six years down under, sharing his spells with the clubs equally, before moving back to England in 2010.

When he came back to England, he signed for North Ferriby United, where he stayed for a season and made eighteen league appearances and netted once, and moved to Sweden.

In the Scandinavian country, he turned out for Östersunds FK, who he helped rise through the Swedish footballing pyramid, earning two successive promotions and helping them rise to the second division throughout his three year stay.

He then moved back to England for the 2014/15 season, where he turned out for Scarborough Athletic, and then joined Canterbury the following season. 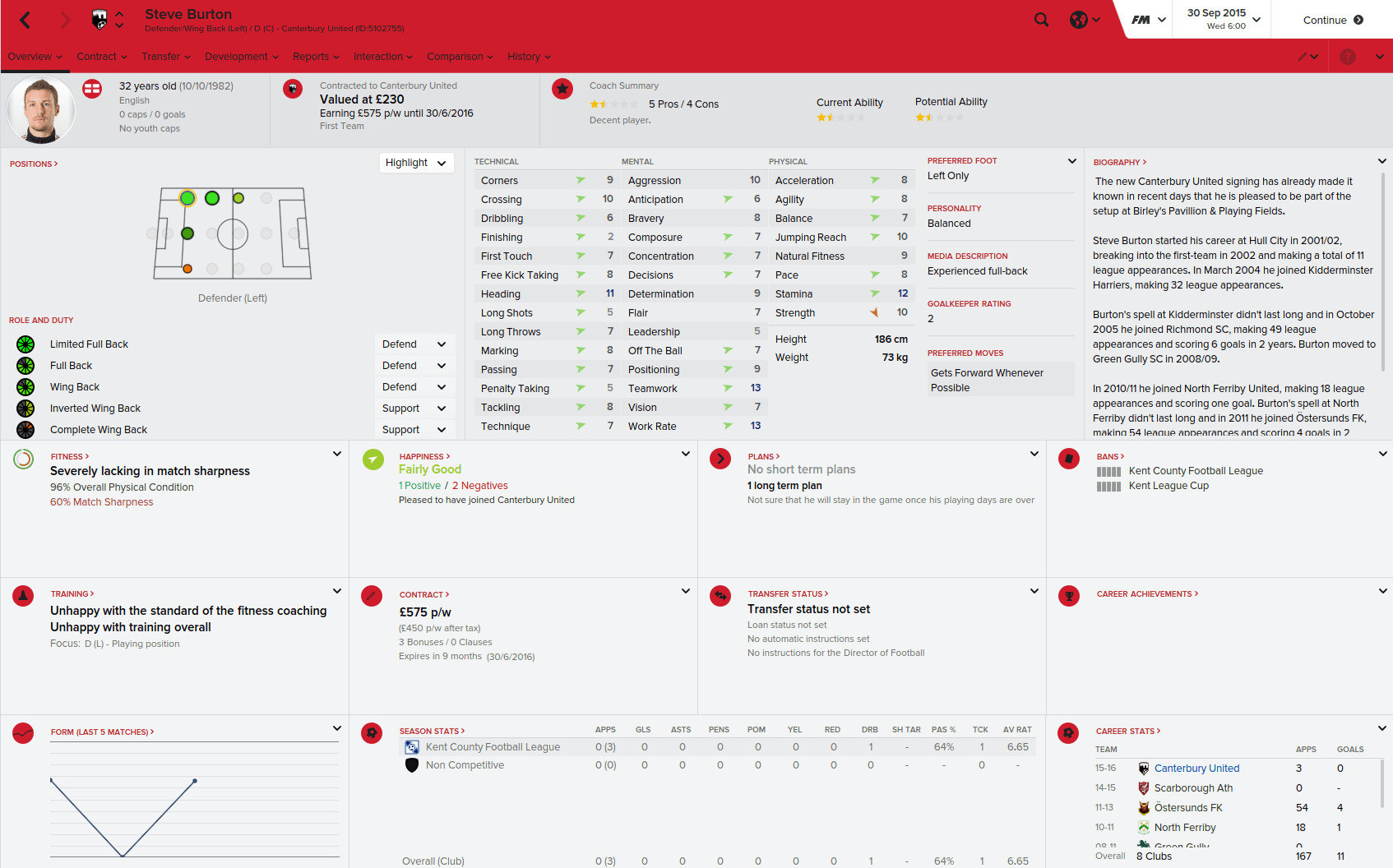 Jack
6 years
Certainly seems like a talented player and had great success in Sweden! Hope you get the best out of him!
Login to Quote

MJK46
6 years
You have someone who will be great for your younger players, great signing
Login to Quote

Tallery
6 years
@Jack - I hope so too!
@MJK46 - Yeah, his experience will do us well!
@Makaio - Thanks, hope you enjoy the adventure!
Login to Quote

Rowlands Is A Bishop 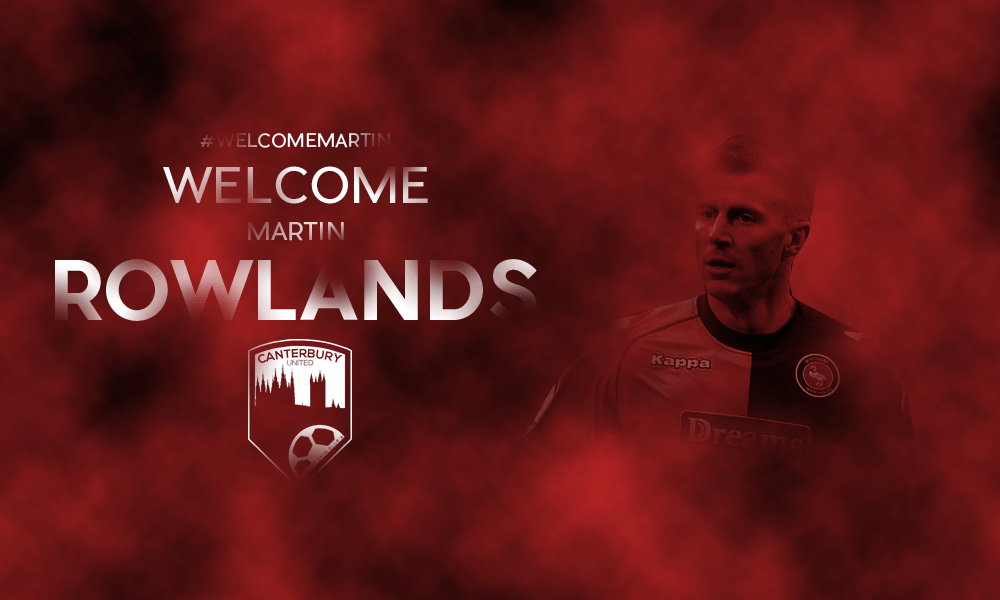 Canterbury United are ecstatic to announce the signing of Martin Rowlands, with his contract beginning with immediate effect.

The 36 year old had been a free agent since his contract with Aldershot Town expired two years ago. The London-born Irishman, who has five caps for his country, and spent the majority of his career turning out for the likes of Brentford and QPR in the upper reaches of English football.

Martin Rowlands:First of all, I am delighted to be back playing football. I have been out a year or so, which is never good, but it’s given me a chance to work on my fitness and make sure I am ready for a return, which happens to be a club, funnily enough, I’d never dreamt of joining when my old contract expired! But the ideas this club has is fantastic, and I am really looking forward to getting started and playing well for the club.


Having started his career with Farnborough almost ten years ago, he has gone on to play for clubs such as Colchester, Wycombe and Millwall as well as the R’s and Bees. Canterbury United boss James Robinson said he ‘couldn’t believe his luck’ when he got the message.

James Robinson:I am not going to lie to you. Martin was just a hopeful signing, I didn’t think he’d actually want to join – let’s be honest, he could play in a lot higher division! I couldn’t believe my luck when I got the call that he’d accepted our contract. He is an amazing player and one that will be essential to any success we may have this year.


Starting his career at Farnborough, he turned out thirty-nine times and scored seven for the club that now plays in the Isthmian Premier League, and impressed, earning a move to Brentford in the summer of ’98. He stayed with the club for four years, making 152 league appearances and netting 20.

However, at the end of his contract, he joined Queens Park Rangers in 2003, and stayed with the club for nine years, becoming a fan favourite and making just under 200 league appearances, and scored 33 times. He spent 2011, however, on loan at Millwall and Wycombe Wanderers, where he made a combined eleven appearances, and left QPR in 2012.

He then joined Colchester United to the end of the season in 2012, making nine appearances and scoring twice, before joining Leyton Orient for the next season. He made thirty-three appearances for the O’s, and found the back of the net on four occasions, before moving to Aldershot Town – where he made thirty-six league starts and scored twice.

He then spent a year out of the game, reportedly retiring, before making his comeback with Canterbury United. 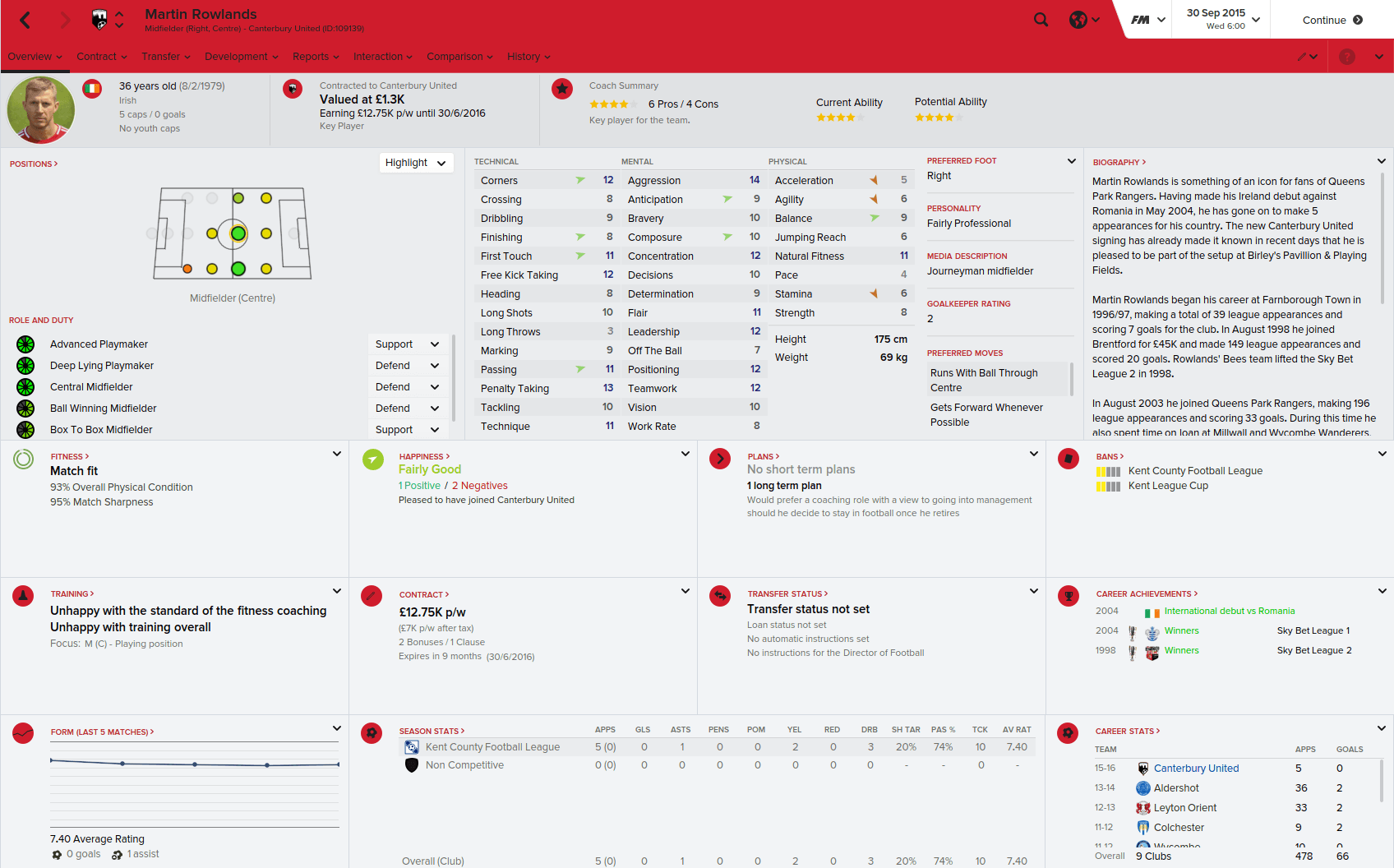 C.J.Lippo
6 years
Nice pick up, sure his experience will come in handy!
Login to Quote

BeanyUnited
6 years
Amazing steal pal! Missed this story during my week away

Tallery
6 years
@MJK46 - He certainly is
@C.J.Lippo - I hope so, we need some!
@BeanyUnited - Thanks man!
Login to Quote

August bought mixed emotions for Canterbury United, seeing them play their first competitive game as a football club against Kennington, before putting themselves to the test against Greenways in their first league home game a week later. 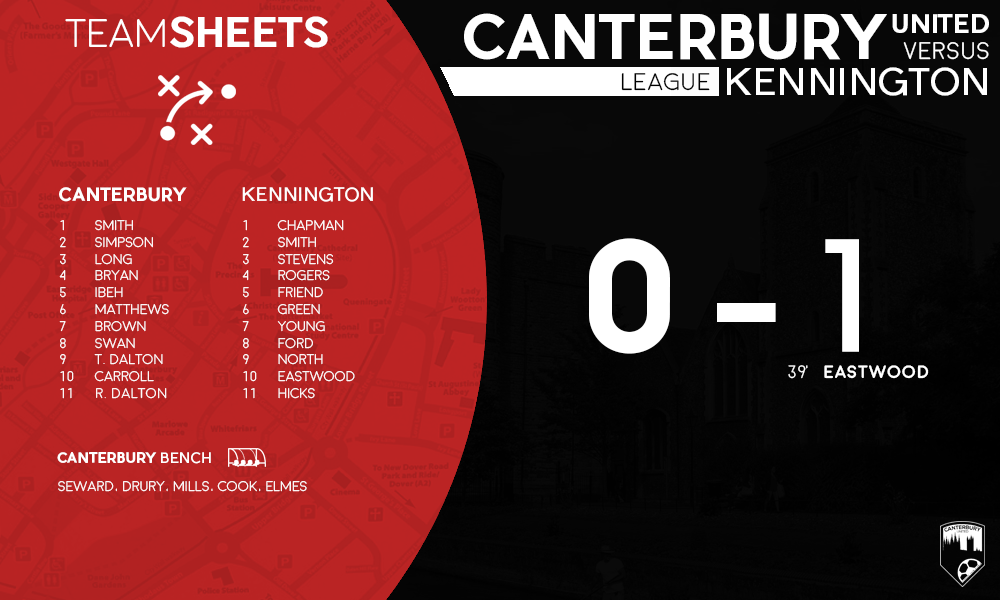 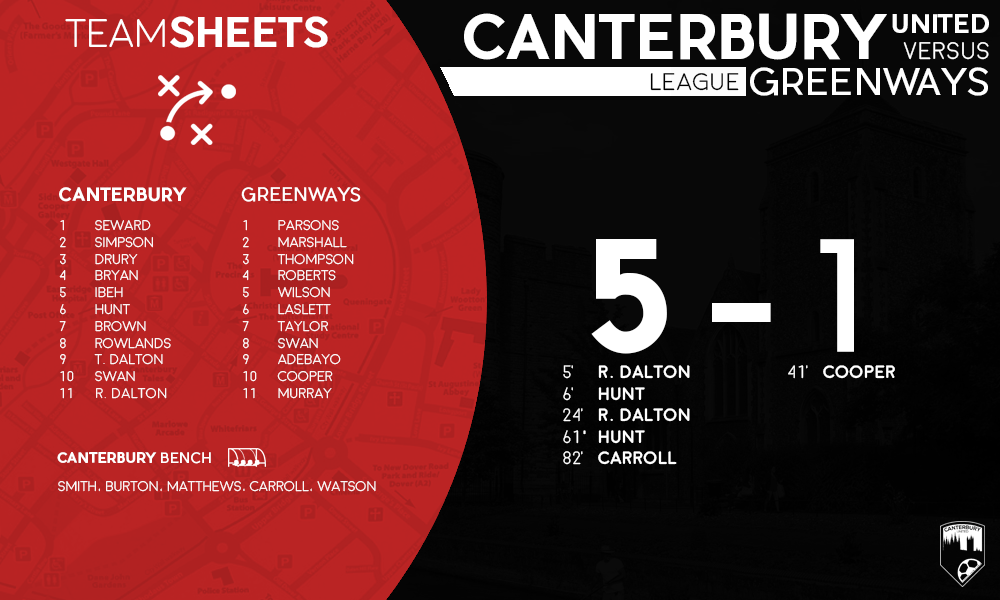 With our first competitive fixture this month, the anticipation amongst the squad was really high. Unfortunately, we made the mistake of having a twenty-four day gap between the last preseason game and the match against Kennington, and that break really showed. We played the worst I’d seen us. After our last preseason game and how impressive we were, I decided to not change the team. Fatal mistake. We couldn’t get a grip on the game to start with, and even though by the end, we had controlled the game in terms of possession and shots, our play was broken by the number of fouls we committed and we look disjointed throughout the game. Our performance could have been summed up from one mistake – the goal. Our defending was appalling, we just let them walk right through us, and then there was the keeping, a huge mistake one-on-one by Smith. And for that, it cost his place in the team for the game against Greenways.

And maybe, the change sparked a little a little match inside the players, as the next game was the total opposite. Within six minutes, we were two-nil up, I’d never seen anything like it. Ronnie Dalton and Ben Hunt were already running rings around the Greenways defence, and each of them deservedly bragged a brace, with substitute Grant Carroll taking his chance well late on. However, despite all the attacking prowess, we still looked shaky defensively, despite putting in more effort on training ground. They scored, once again, by an individual mistake coupled with a poor team effort to stop the mistake happening in the first place – Bryan pressed up high, but missed the interception and the scorer – Cooper – found himself in on goal, and a fantastic finish over Seward rounded off the defensive horror show. But, apart from that, I cannot be anything but impressed with how we blew the opposition away, who now languish bottom of the league – and it is clear to see why.

As the temperatures start to fall as we head for football’s golden season, September sees Canterbury United play four games. The first is a seventeen mile trip away to Sittingbourne to face Bordon Village, who currently sit fourth in the league. The second fixture of the month sees the team take a drive again, this time to Bexley, before seeing two home fixtures against Staplehurst Monarchs United and Faversham Strike Force to round off the month.
Login to Quote

Griffo
6 years
You are underway, best of luck for the season Tall!
Login to Quote

Balik
6 years
Why would you not have friendlies for a month.....other than that, good luck with September! Especially with Bordon Village away!
Login to Quote

mgriffin2012
6 years
Pretty good start, sure results will continue to be impressive!
Login to Quote