Extending their undefeated run to nine games, Brescia found themselves in a month of high scoring matches.

After their Italian Cup win against Pescara, Brescia game from behind to seal a draw against Carpi thanks to a hattrick from Ernesto Torregrossa. A dominant 5-1 victory followed against Ascoli including another hattrick, this time from Luca Miracoli.

Continuing to follow previous results, Brescia came from behind once again against Pescara, scoring twice in the second half followed by a decisive 3-0 against Livorno.

To finish the month, Brescia defeated rivals Hellas Verona who went into the game after the sacking of their manager Fabio Grosso in a thrilling 3-2 win. 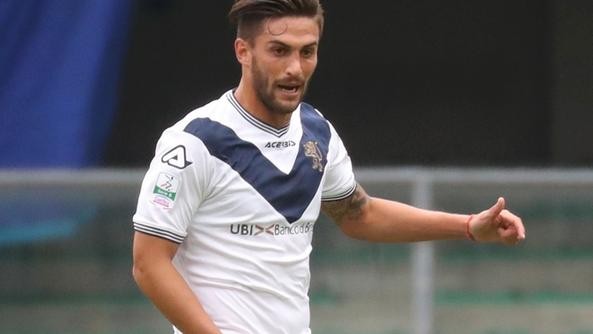 Proving to be the form player so far this season for Brescia, Ernesto Torregrossa has gone back to back with the player of the month award after scoring eight goals in six matches.

The 26-year-old finds himself at the top of the scorers charts in the Serie B with 14 goals so far with the closest rivals being Giampaolo Pazzini (Hellas Verona) and Ilija Nestorovsi (Palermo) who have both scored 10 goals each. 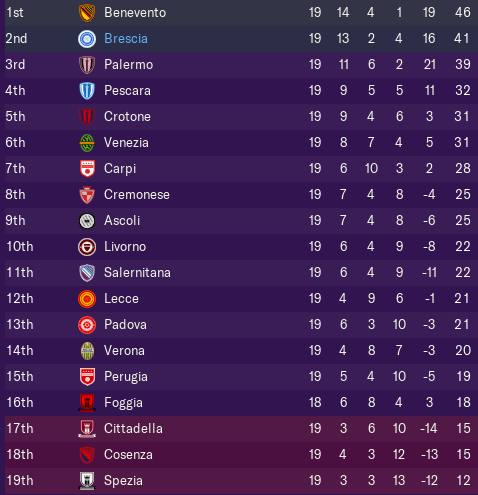 The top three sides of Serie B have broken clear from the rest of the pack. Benevento holding a five-point lead over second placed Brescia who are being pressured by Palermo who were title favourites at the start of the season.

At the bottom of the table, Foggia have moved out of the relegation zone in an incredible effort after having eight points deducted at the start of the season.


Injuring his calf during training, Romagnoli who is on loan from Empoli for the season is expected to be out for between one to two weeks.

Brescia face a short month of fixtures to start to 2019. Starting with the Italian Cup First Round fixture against Serie A side Fiorentina.

In the final two matches, the Rondinelle will take on relegation candidates Perugia and Consenza.

Jack: The win is all that matters, very nerve wracking though

mgriffin2012: Certainly a big challenge but I am sure we can put in a good performance

ScottT: Really good run so far, we will do our best to keep it going

Justice: Hope that is the case
Login to Quote

mgriffin2012
2 years
I think you're well on your way to securing promotion here, keep it up and Serie A will be well within reach!
1
Login to Quote

Justice
2 years
Goal scoring machines at the minute. In a strong position, the second half of the season will surely see you wrestle top spot away from Benevento!
1
Login to Quote

ScottT
2 years
Free-scoring at the moment, which is fantastic. The form of Terregrossa can be pin-pointed as a main reason for this and hopefully it can continue. Benevento must be playing very well for them to have a five point lead over yourselves - as the run you're on makes for great reading.

Looking forward to seeing it continue. Oh and good luck against Fiorentina!
1
Login to Quote 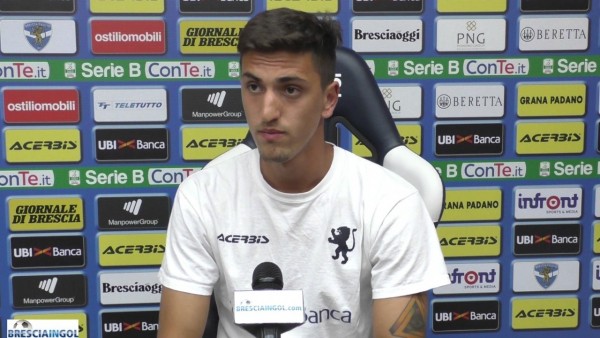 Emanuele Ndoj addressed the media to announce his move to England
• The sale of Ndoj and Spalek will see Brescia make €2,425,000 in transfer fees
• The Albanian Ndoj made his international debut against Kosovo last month
• Spalek made 16 appearances for the Rondinelle across two seasons

In the first moves of the transfer window for Brescia, two players in Emanuele Ndoj and Nikolas Spalek have left the club.

An exciting move awaits Emanuele Ndoj who will depart Brescia to join Huddersfield Town who are currently in 17th in the English Premier League. He is expected to go out on loan upon his arrival in England.

Slovakian winger Nikolas Spalek has returned home to play for Slovan Bratislava. It is believed that Spalek was sold as he did not fit the 4-3-1-2 formation used by Eugenio Corini.

"It is a shame to lose quality players such as Emanuele and Nikolas but unfortunately this is what occurs in football and you do not always have everything go as you hopes" said Brescia manager Eugenio Corini. "I wish them both the best of luck at their new clubs" he added.

Fans of the Rondinelle will be following the club closely to see what the club does with the incoming fees during the transfer window.

mgriffin2012: Really enjoying a great start, hopefully we can keep it going

Justice: Benevento look very likely to be on their way up but hopefully we can run them down

ScottT: Torregrossa has been great helping the team up front with Donnarumma being out with injuries for a majority of the season
Login to Quote

ScottT
2 years
A good amount of money coming in.
1
Login to Quote

JT
2 years
Nice start to this save. Looking forward to seeing you bring in some new faces
1
Login to Quote 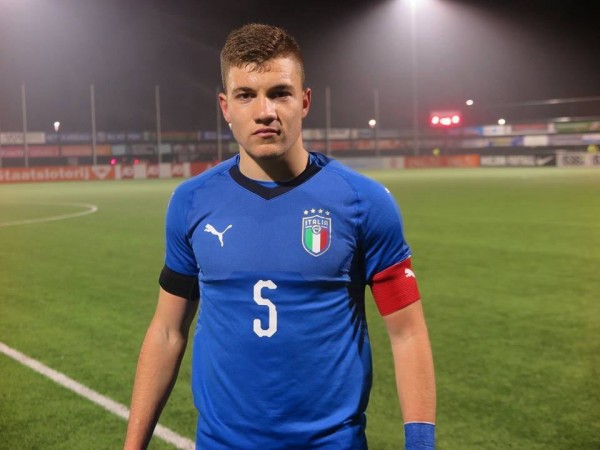 Capped at youth level, Armini is considered a strong prospect in Italian football
• Armini arrives at Brescia for a transfer fee of €1,700,000
• Brescia paid a fee of €400,000 for Furlanetto to come to the club
• Both players are expected to start in the youth set up upon arrival at the club

In a move looking towards the future of the club, Brescia have signed 17-year-old central defender Nicolo Armini and 16-year-old goalkeeper Alessio Furlanetto from Lazio. Both players have signed contracts which will see them at the club until the end of the 2021 season.

Capped at the youth level for Italy, Armini can play all the way across the defensive line if required and is considered a smart footballer with anticipation, concentration and decision-making being amongst his strongest qualities.

A strong shot stopper, Furlanetto is an agile player whose strong aerial ability and reflexes are expected to see him develop into a quality goalkeeper in the future.

"To be able to attract two high quality young Italian players is great for the club." said Brescia manager Eugenio Corini. "I am really excited to watch them develop and make their way into the first team squad in the future." he added.

Justice: That is correct

ScottT: Very handy for this level of football

JT: They are on their way

mgriffin2012: Ndoj just sees us lose a little bit of depth, Spalek is a very good player but just doesn't fit my system
Login to Quote

Fiorentina Too Strong For Brescia 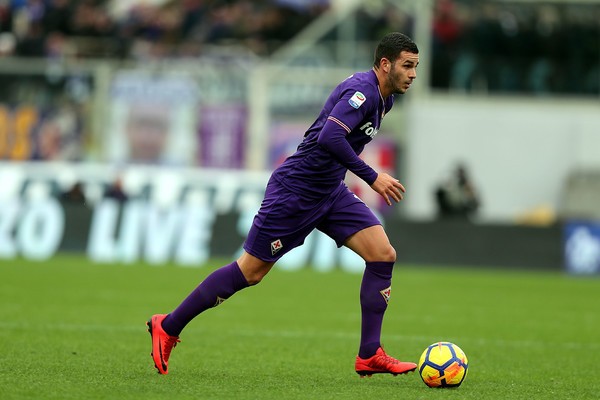 Coming out with an aggressive style of play, Brescia were not afraid of going into tackles hard early in the game, not allowing their more fancied opponents to find a rhythm. Despite this, Fiorentina managed to produce a few chances in the first half, but striker Cyril Thereau was unable to convert.

Early in the second half, Brescia has their best opportunity to score with Ernesto Torregrossa missing an unmarked header from an Alessandro Longhi cross.

Defender Luigi Carillo who was in the side for Simone Romagnoli who was missing due to injury took a poor touch, allowing Valentin Eysseric to intercept the ball and convert a one on one chance to give Fiorentina the lead in the 80th minute.

In a desperate bid to level the score, Brescia attacked to the best of their ability, but Fiorentina managed to hold on to secure their progression in the competition.

Fiorentina will now go on to face Roma in the Italian Cup Quarter Final while Brescia will now focus on the Serie B where they currently find themselves in the promotion places.

mgriffin2012: They will take a bit more time than the usual prospects I sign but looking forward to seeing if they become starters in the future
Login to Quote

ScottT
1 year
Armini looks to be an exciting prospect. I'm looking forward to seeing what role he plays.

That Fiorentina result is a real kick in the teeth, the scoreline seems to suggest a very close encounter, as does your description of the game. Unfortunate, but nothing to be too disheartened about.
1
Login to Quote

It was a poor month for Brescia based on their standards set throughout the season so far. After the loss in the Italian Cup, Brescia then lost 2-1 to Perugia who find themselves in the bottom half of the table.

Brescia managed to finish off with a win in January against Cosenza who find themselves in the relegation places heading into February.

After being out for a majority of the season with injury, the return of Alfredo Donnarumma has helped Brescia improve their attacking play dramatically.

In three matches during January, the 28-year-old scored three times, including a brace against Cosenza. It is certain that an injury free Alfredo Donnarumma will dramatically improve the chances of promotion to the Serie A for Brescia. 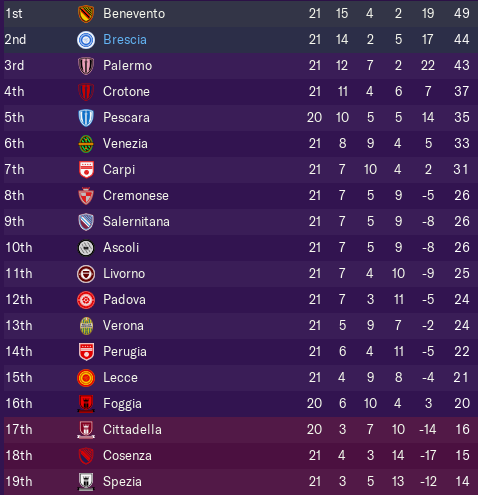 Despite a 4-3 loss to Palermo, Benevento still find themselves five points clear at the top of the table after Brescia were unable to capitalise on the league leaders dropping points during the month.

Palermo remain a threat to the top two but have been unable to convert their draws into wins so far this season.

At the bottom of the table, three clear relegation candidates have been established with four months left in the season.

Four fixtures await Brescia in February, in a month which will be pivotal to their promotion hopes.
The away fixture against Palermo is set to be a six-pointer with plenty on the line for both teams.

ScottT: I was very happy to get as far as we did to be honest but given the quality performance I was hoping for an upset
Login to Quote