I think he even scored against Wood

tango602
9 years
Its time for the End Of 2017 Update, I am not really going to say a lot in this one, partly because I need to start doing updates for 2018 and also because it is now less than a week until I can barely get on FM.

2017 was a disappointing season and I have moved on from it as quickly as i can as we finished 11th in the league and will hopefully push for promotion in 2018.

So here are the results from September and October 2017.

Our 2018 Pre-Season starts with a match against Mjallby. Until then I bid you farewell.
Login to Quote

or.dabool
9 years
Tough ending but it's ok, Torns can come back from everything!
Login to Quote

Blue
9 years
Bad last couple of months, but you'll bounce back next season.
Login to Quote

tango602
9 years
Now its time to look at how our pre-season preperation for 2018 went, I am really hoping to mount a title challenge this season and have a good feeling we can.

We now have a parent club who are Helsingborgs IF of Allsvenskan and one of the top clubs in Sweden.

So having scheduled and played some tough games here are the results:

Now for some pictures. Highlights of the Man City Reserves and Chelsea Reserves games will be up later on.

Link with Helsingborgs IF 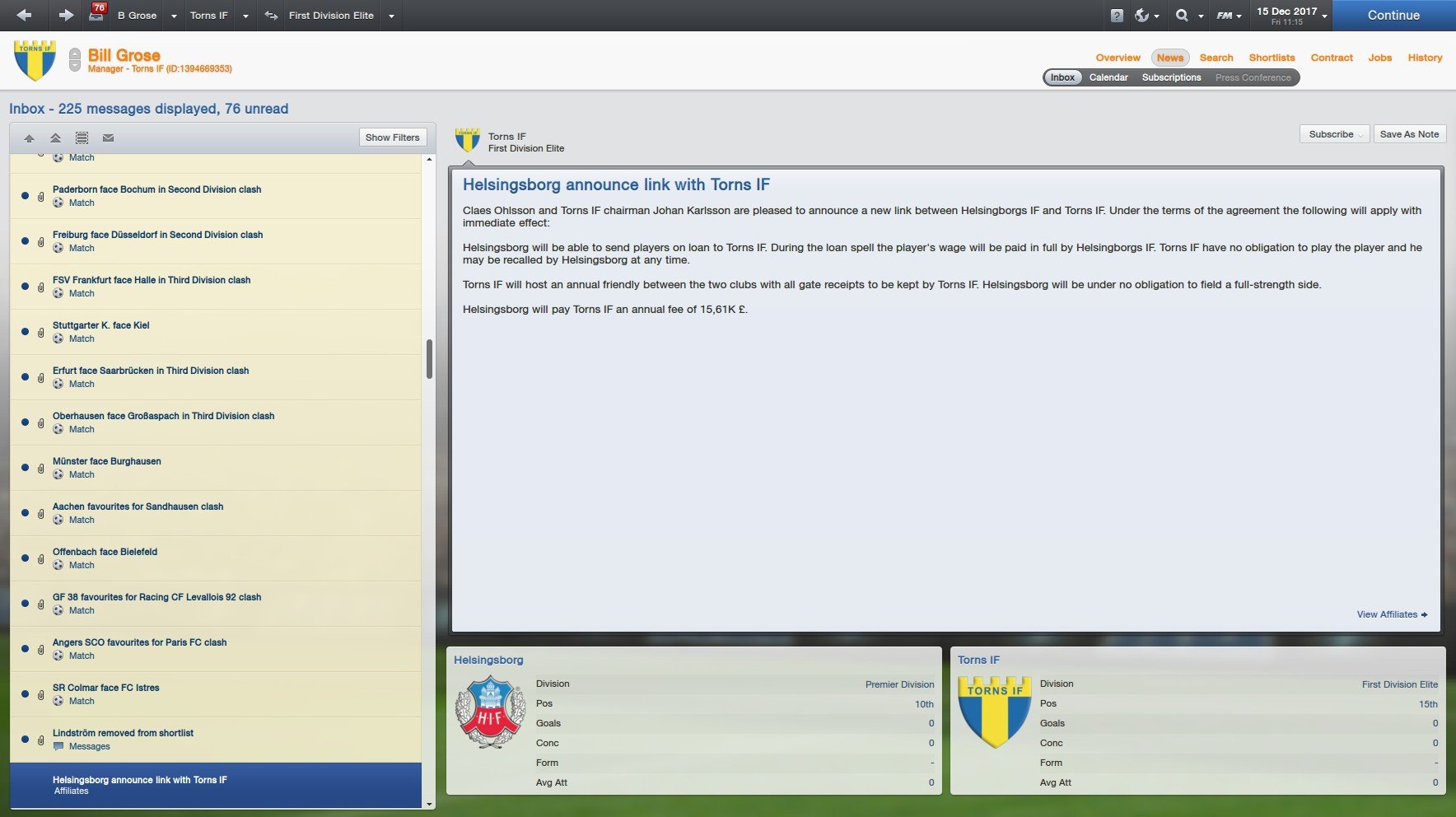 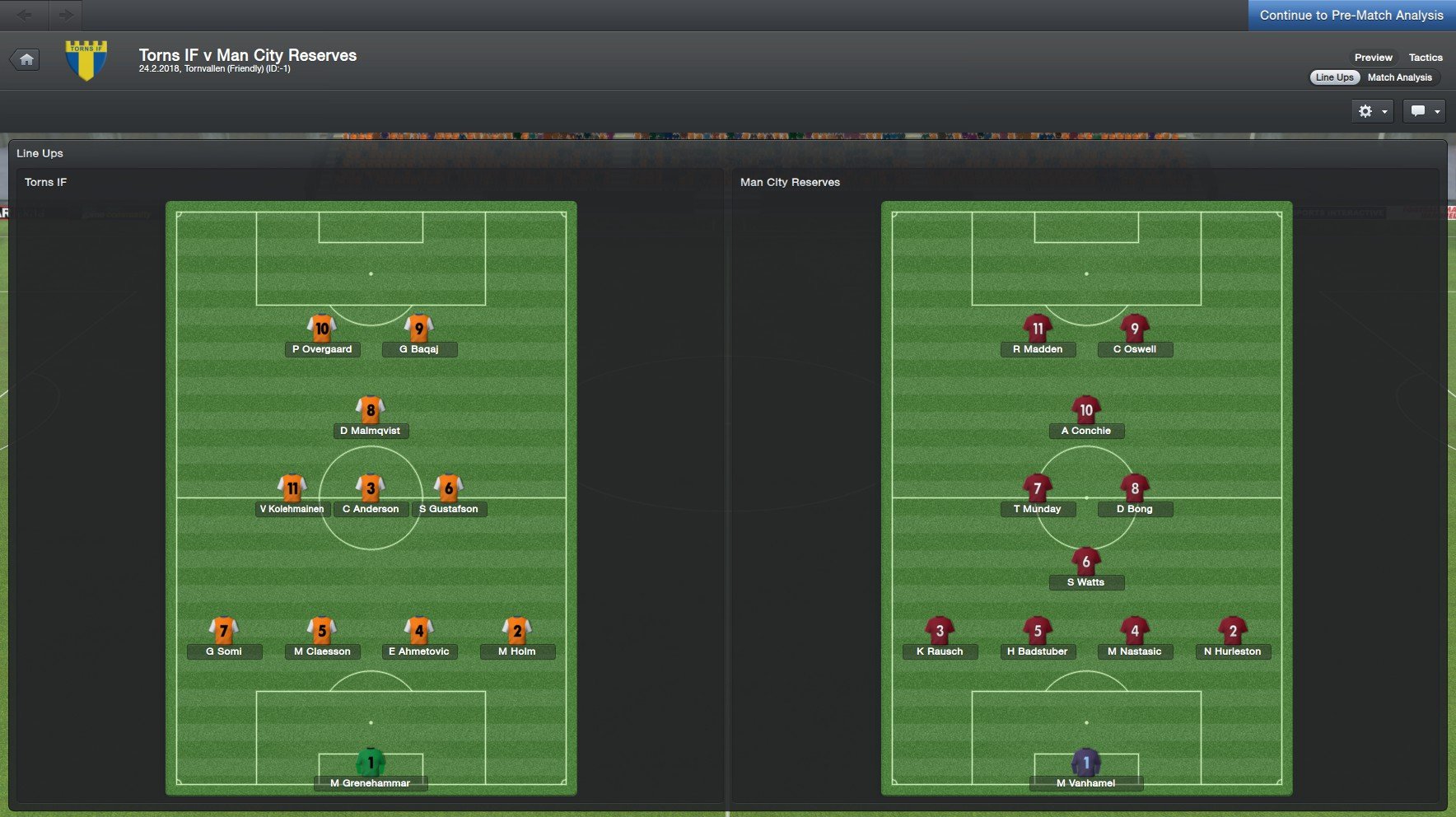 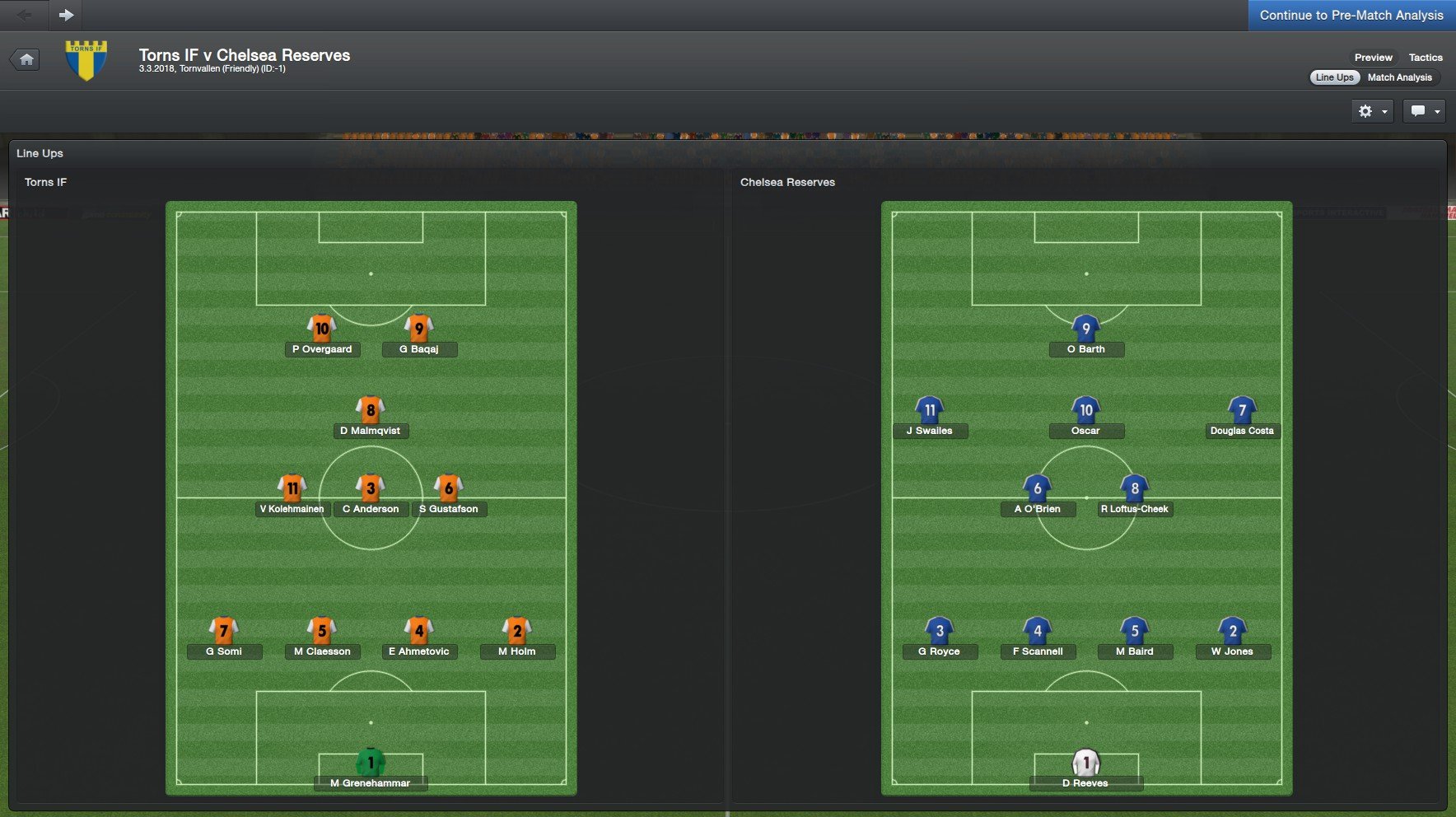 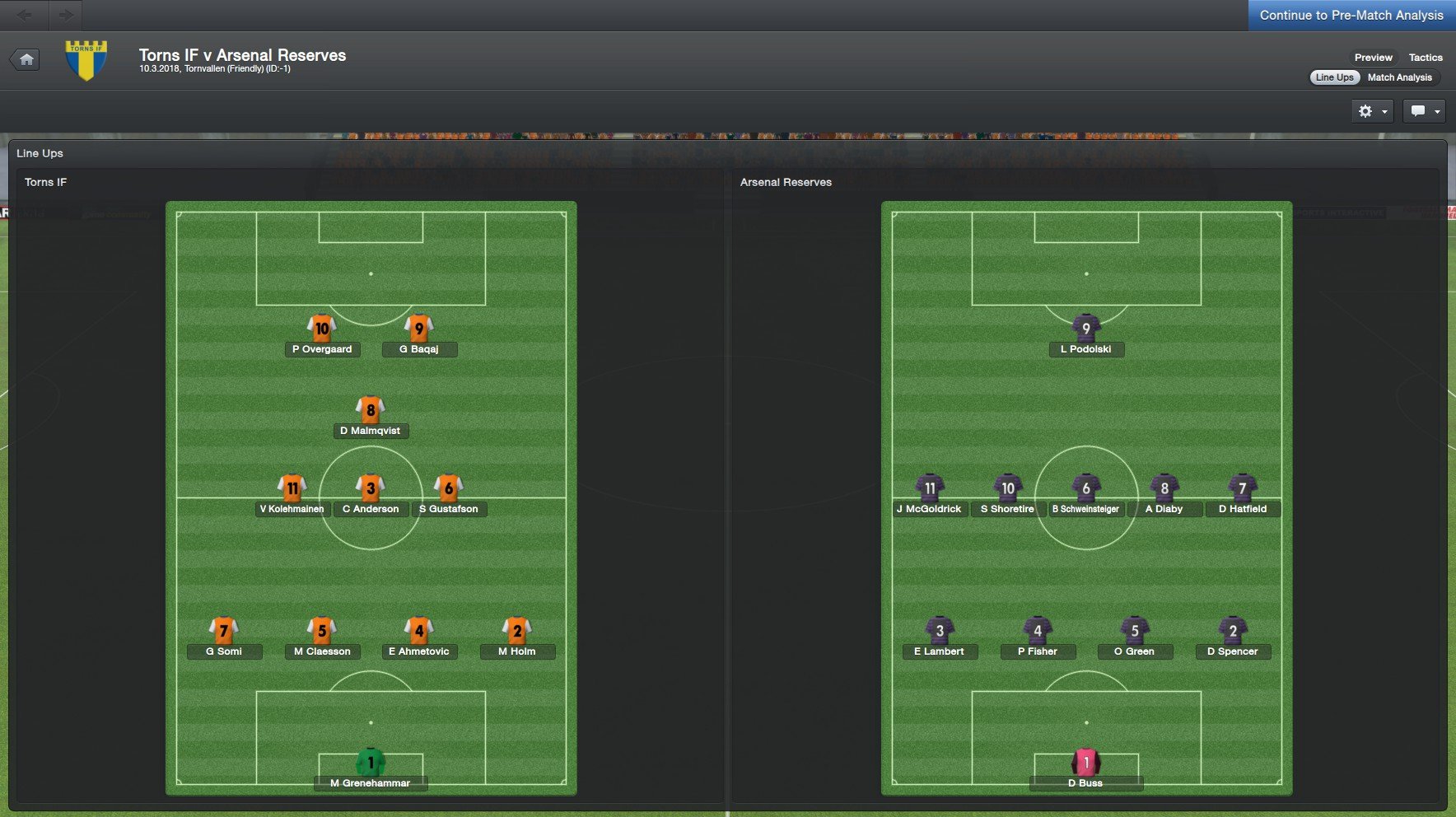 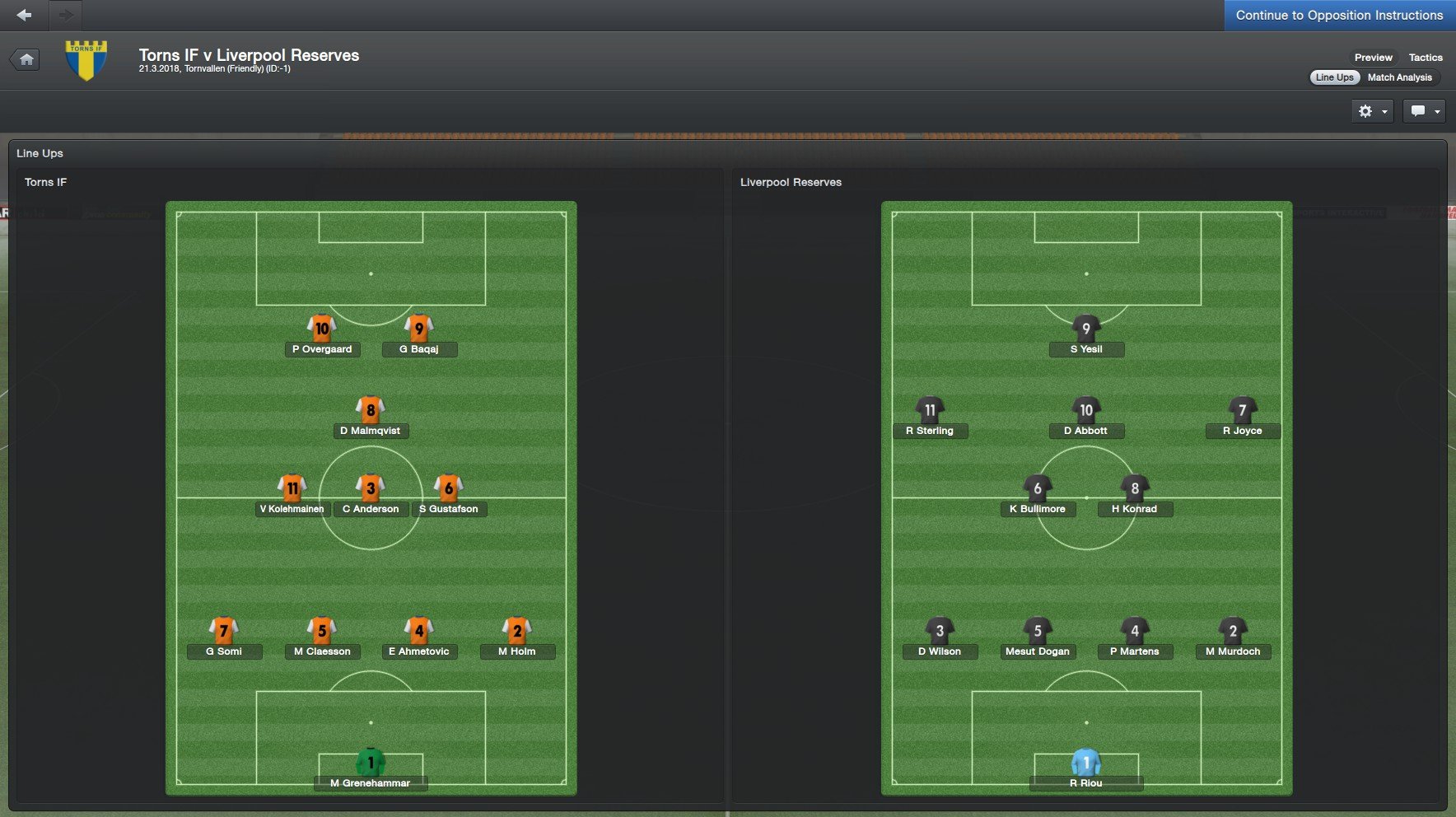 tango602
9 years
Here are the highlights from the Man City Reserves and Chelsea Reserves games, best viewed at 720P. Enjoy

Keep up this amazing progress

or.dabool
9 years
Some very nice results, especially the Man City and Chelsea reserves! Don't give up because of yesterday please.
1
Login to Quote

Bill Grose might not be the first name that springs to mind when thinking of great managers, and he may not have won as many trophies as all the other great managers, but he has managed to do something no manager has done before him. He has singlehandedly managed to take Torns IF to the highest tier in their history, and managed to stabilise them there, even challenging for promotion to the Allsvenskan in recent seasons. Many much more experienced managers would struggle with this.

Whilst Grose is quickly making a name for himself in Sweden, showing himself to be a true up and coming star in the country. He is also building a reputation outside of the country too, having taken on the reserves and academies of some of England's top teams. Most recently, he took on the reserves of Manchester City, Chelsea, Liverpool, and Arsenal, and only lost one of the games. His victories over Chelsea and City were very impressive, as Chelsea were able to play Brazilian starlet Oscar, and City played Holger Badstuber, and Matija Nastasic in defence.

The way Bill Grose is headed, he isn't just set to take on the rest and the best of Sweden, but also the rest of the world. The next few years will be very interesting, and crucial to Grose's future success as a manager, although you certainly wouldn't bet against him so far.

and nice victories over City and Chelsea's reserve, congratulation:D
1
Login to Quote

We only had to play one match in the league in March and that was away to Halmstad who had come last in Allsvenskan last season, we had drawn 0-0 with Halmstad in the 2017 pre-season but I still expected a tough match, we came out of it with a 1-0 victory thanks to a goal from Pontus Overgaard.

Then we moved into April which started with a match against recently promoted Vasalunds IF at Tornvallen which we won 2-1 with goals from Pontus Overgaard and Guri Baqaj after having been 1-0 down, following this we had to visit Nya Parken for a match against IFK Norrkoping which finished 1-1 and after that game came a 1-0 loss at home to Oster.

Following these results came another big match against Syrianks at Tornvallen, I was expecting a difficult match but this is not what it proved to be as we easily ran out 3-0 victors with a brace from Pontus Overgaard and a goal from Guri Baqaj to move us up to 3rd in Superettan, this was followed by another good win against a tough opponent at the start of May, this came in the form of recently relegated Hammarby Fotboll at the Tele2 Arena where we comfortably won 3-1 thanks to a hat-trick from Ville Kolehmainen for the first time ever.

Slight Disappointment followed as we were defeated once again by our bogey team Skovde by one goal to nil.

May would bring 3 more matches for us to play, the first of these being at home to BK Forward which we won 1-0 with Pontus Overgaard being the only scorer, this match was followed by a disappointing 1-1 draw at home to bottom of the league Eskilstuna City who so far had not won a single game in the league this season.

Our last game of May would be away to Kalmar FF who are always tough opponents for us to beat but we managed to get a narrow 1-0 win which was quite pleasing.

To accompany this update I have found some footage of Torns IF from back in 2011 to show just how far I have brought them, they were promoted to the 4th tier for 2012 so really this is where they were before I took over.

The FM Rookie
9 years
Overgaard is ripping the opposition to shreds for you! He is a tank!
1
Login to Quote

Blue
9 years
Overgaard is immense! Keep this up Tango!
1
Login to Quote

June started with an away match against Karlslund which finished 1-1 which was an ok result but we have had better against them, this was followed with a match against Tegs SK at Tornvallen which resulted in a 2-0 victory with one of the goals being scored by Pontus Overgaard to send us up to 1st place in Superettan.

Unfortunately June would end with two disappointing results, these being a 2-1 loss away to Degerfors and a 3-3 draw at home to GIF Sundsvall, I knew we could beat both of these teams hence my disappointment. The scorers for us in the Sundsvall match were Ville Kolehmainen and Guri Baqaj.

To start July we had to host Landskrona BoIS in a match which unfortunately resulted in a 3-1 loss which was disappointing as I hoped for at least a draw with them, following this we were away to Vasalund which was a pleasing match resulting in a 2-0 victory, we then faced Halmstad and IFK Norrkoping at home resulting in a 1-1 draw with Halmstad and a 2-0 victory against IFK Norrkoping, the goals against Norrkoping being scored by Pontus Overgaard and Ville Kolehmainen.

Our last match of July was against Oster in an away game which unfortunately resulted in a loss by two goals to nil.

August would start with a tough match away to Syrianska, I was pleased with the team's performance in this match but we unfortunately lost 3-2, I felt we deserved at least a draw from this one, following this we hosted Skovde at Tornvallen which resulted in the most pleasing victory of the season so far as we defeated Skovde by three goals to one with the goals being scored by Guri Baqaj and Pontus Overgaard.

Then came a big disappointment as for the second season running we were knocked out of the Svenska Cupen in the 2nd round on penalties by a 3rd tier side, this time the opposition being Limhamn Bunkeflo who defeated us by four penalties to three.

A tough match followed as we hosted Hammarby Fotboll at Tornvallen, this was always going to be difficult but I was very pleased to come out of the game with a 2-2 draw after goals from Robert Widmark and Ville Kolehmainen, our last game of August was away to BK Forward who are not the easiest team to play but not the hardest either, we played well and won by three goals to two with Guri Baqaj and Dennis Malmqvist scoring the goals for us.

I leave you with some pictures until next time. 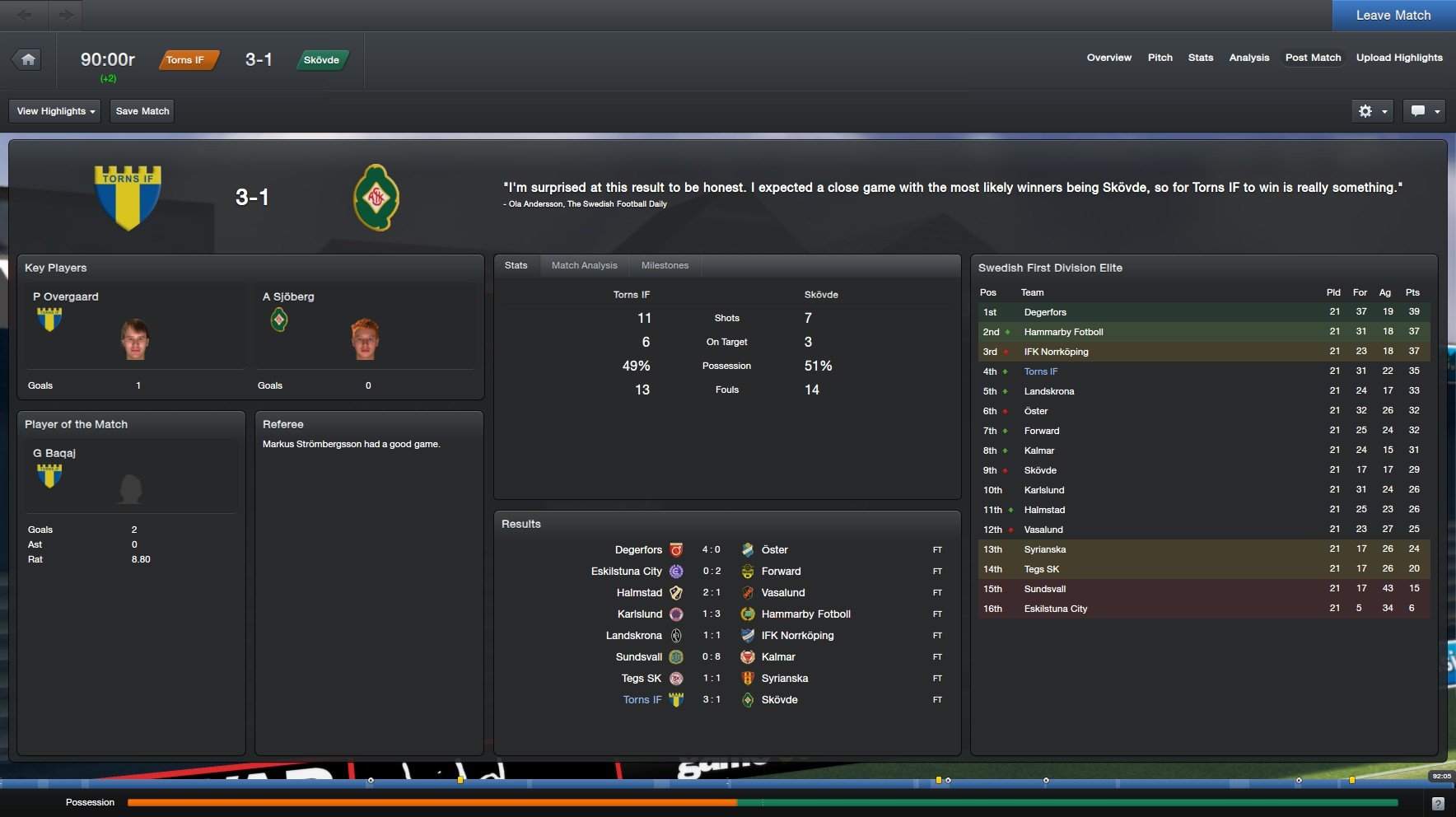 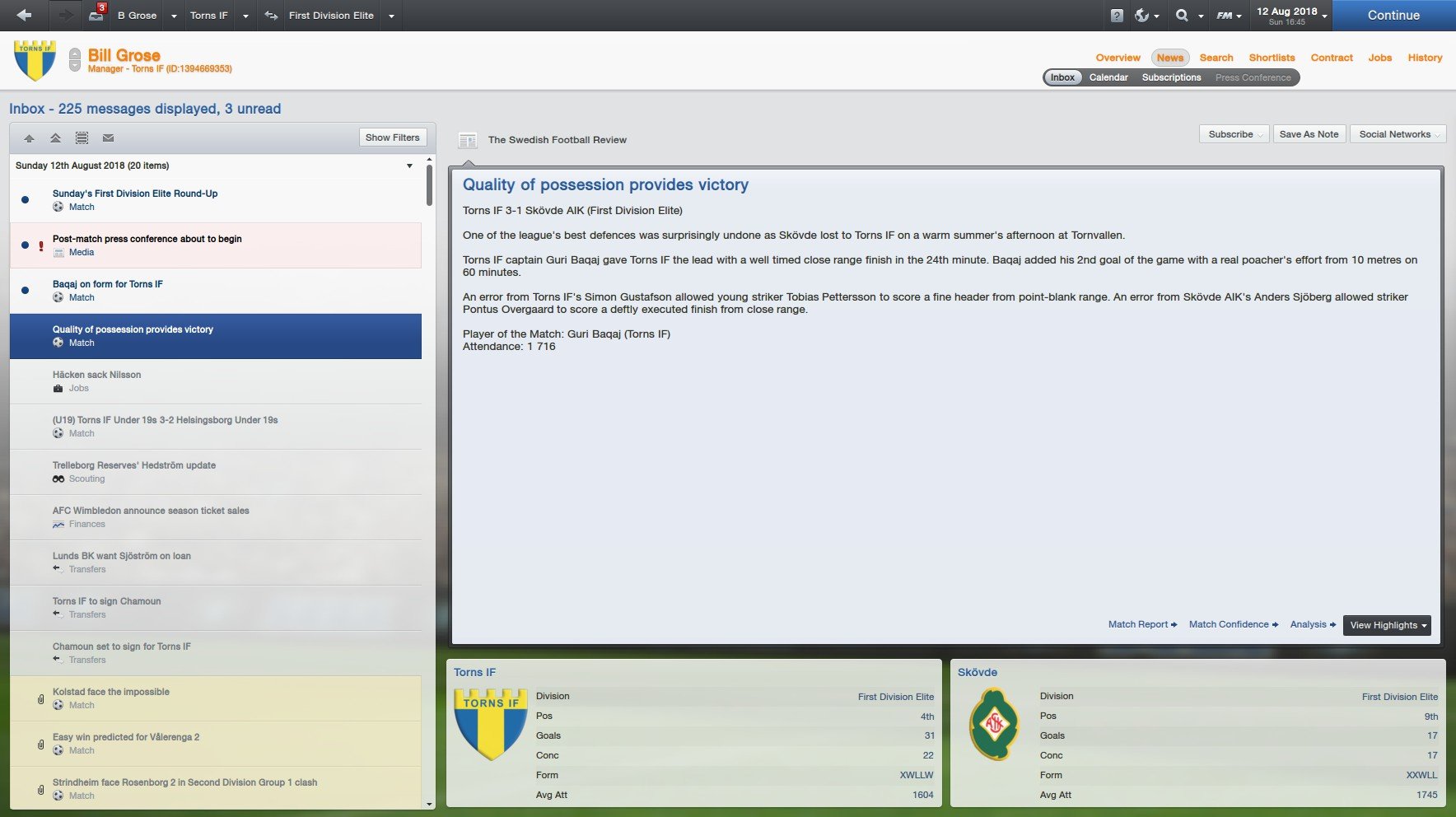 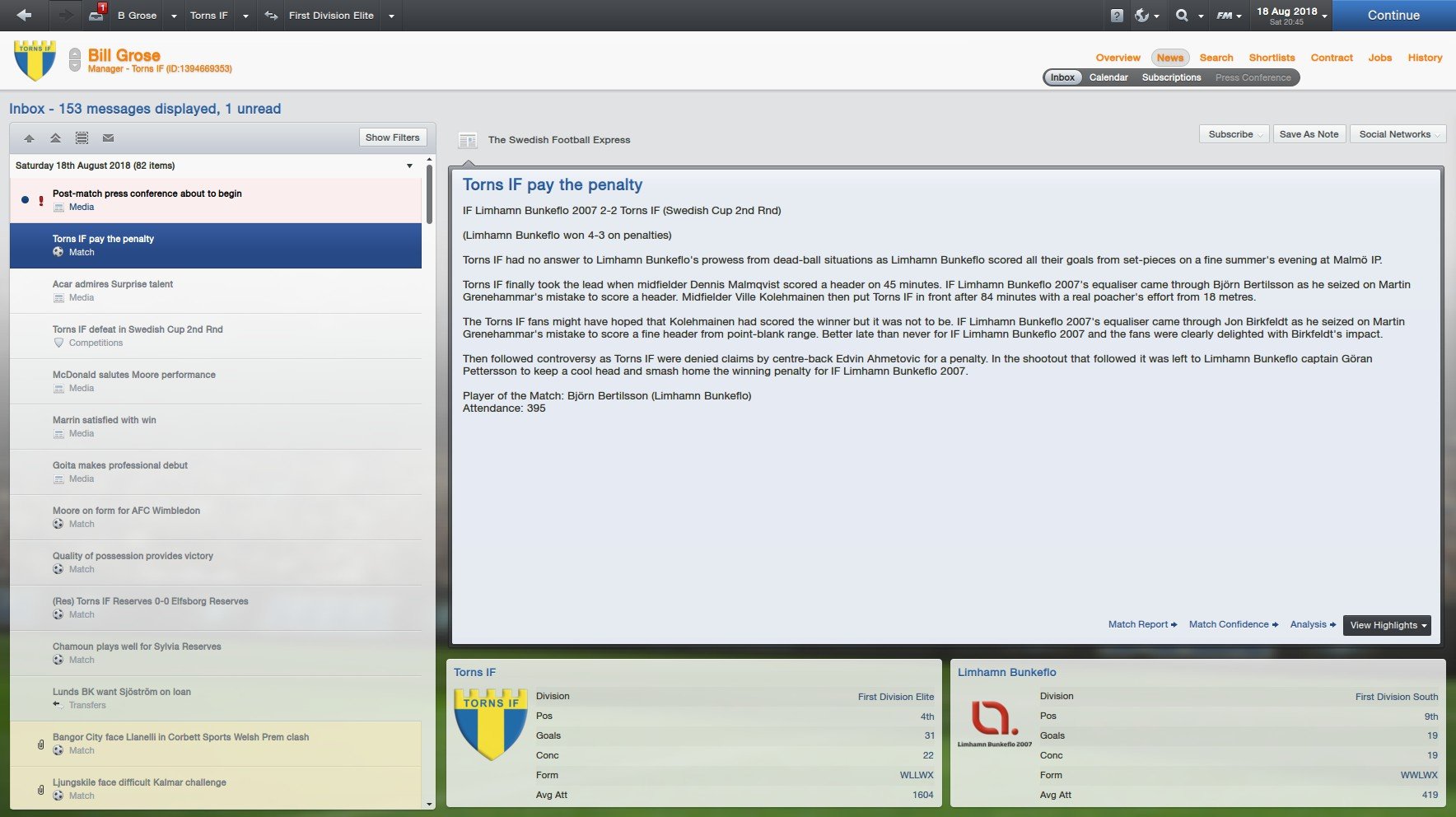 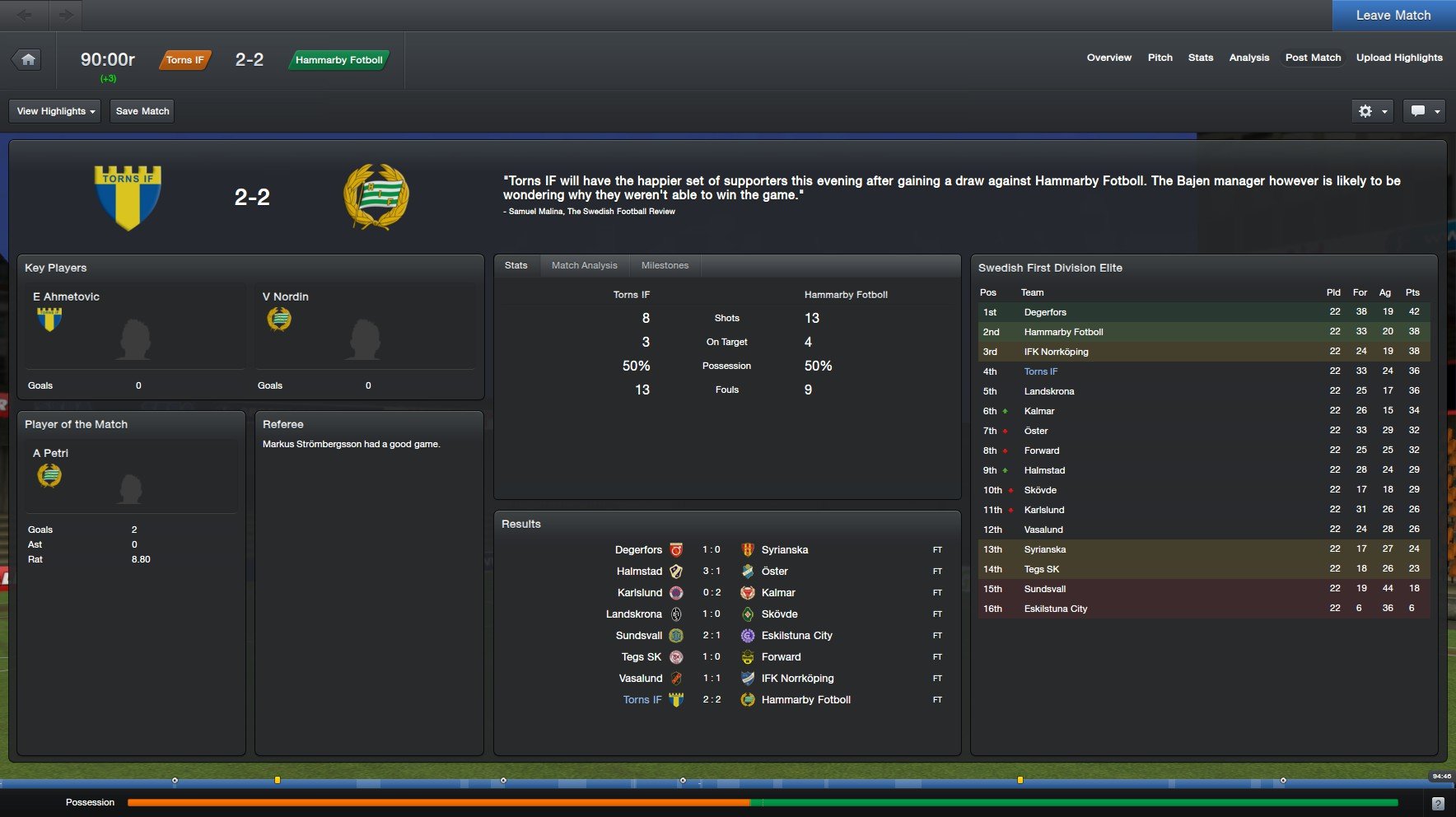 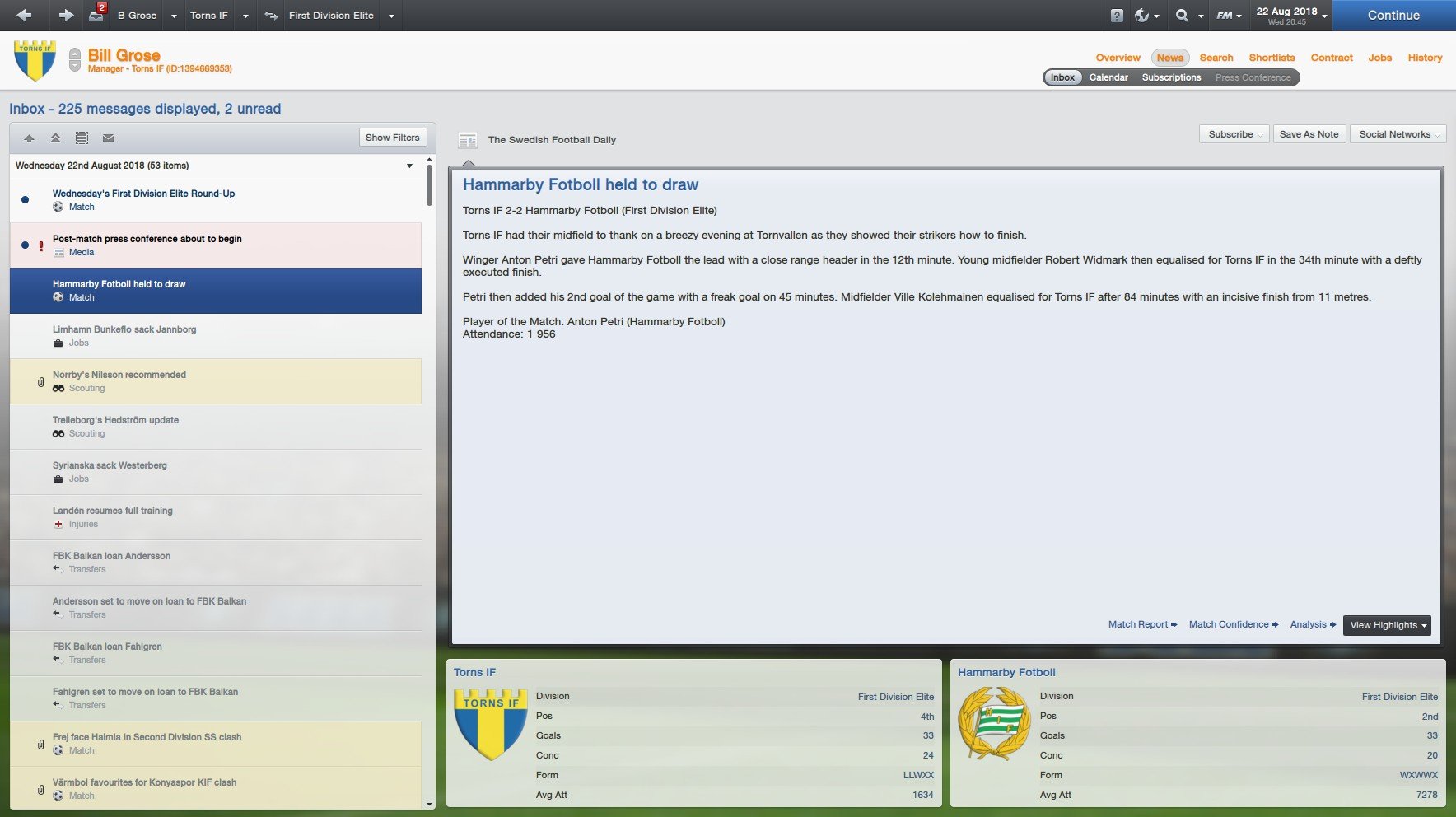 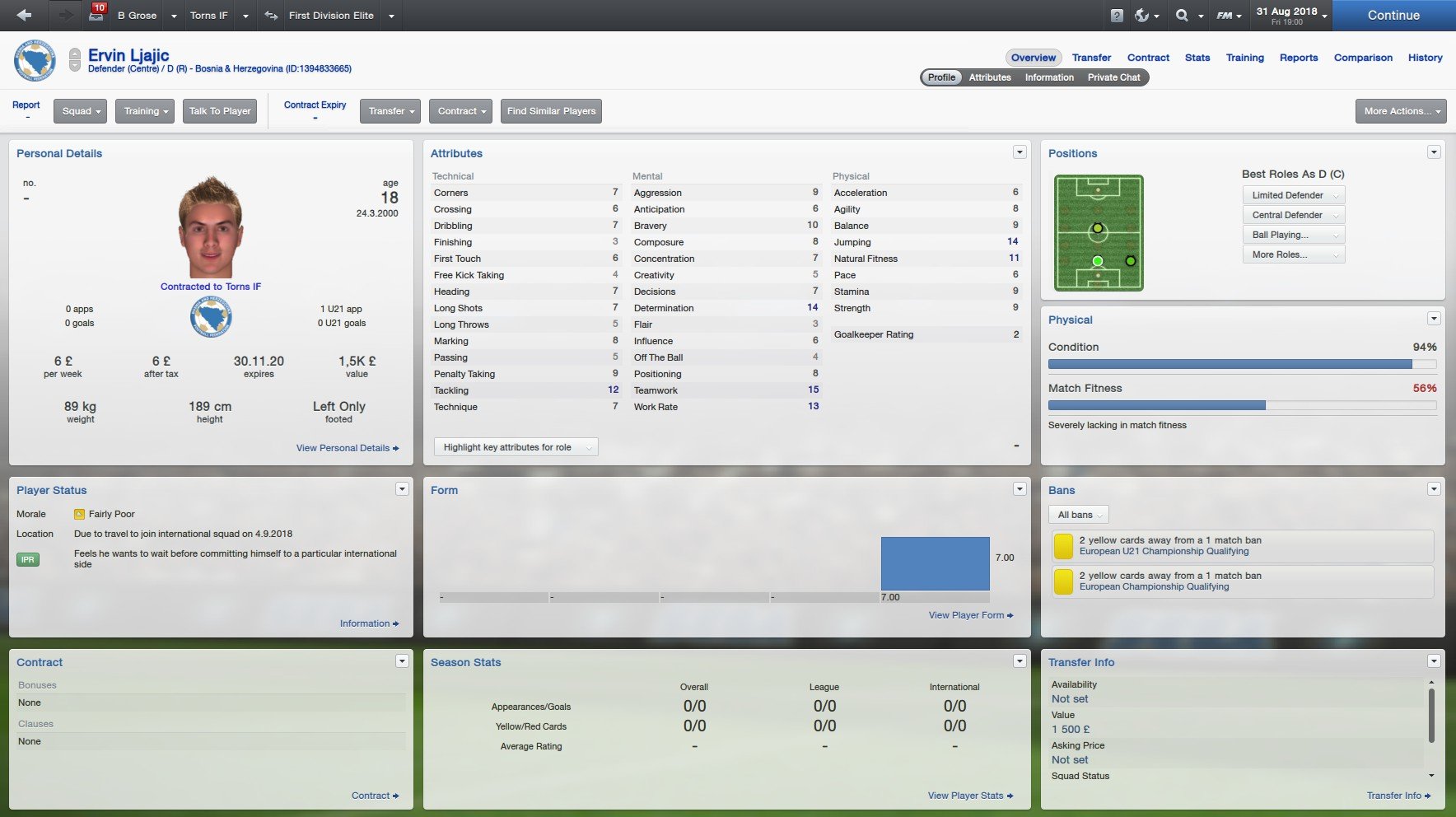