Kiwi
7 years
One of the things which showed up in the game against Liverpool was the lack of team cohesion, and the number of chances we duffed as a result. There is definately a language barrier to be worked on, and with injuries and suspensions, my first choice team hasn't played that much together.
Login to Quote

Lichaba underlined his worth to the cause with two outstanding goals from midfield, as he showed our wingers and strikers up. It might be time to rotate Savic out for a while, as he seems to be struggled a bit.

This was a huge win for us, and whilst we were lucky because Sparta Prague had a man sent off at the end of the first half, we also have our own problems in that regard, with club captain Jan Halama also being sent from the field in injury time.

His wallet will be considerably lighter when I have finished through with him. 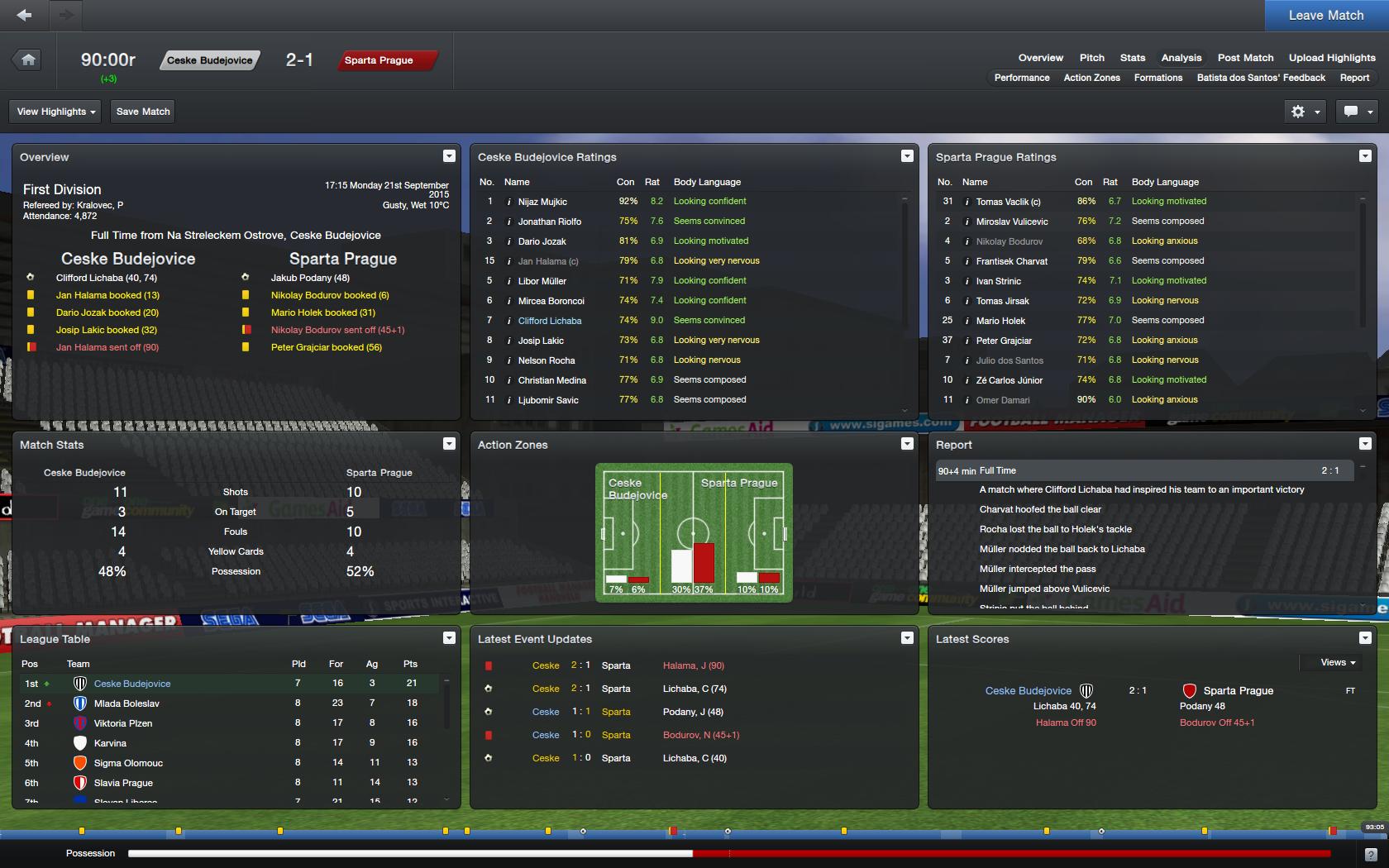 Kiwi
7 years
Keeper Mujkic and midfielder Lichaba were selected in the team of the week.
Login to Quote

We had to be sensible as this was where we exited last season, as it only took us two minutes to break the shackles, and then we cut loose. Lichaba again had a stormer, frontman Afanasjev (in for Savic after a couple of poor games) scored a brace, and the ever reliable Medina, also scored, and did defender Riolfo, and winger Rocha. Pelhrimov's problems were compounded when centre back Navratil conceded an own goal. 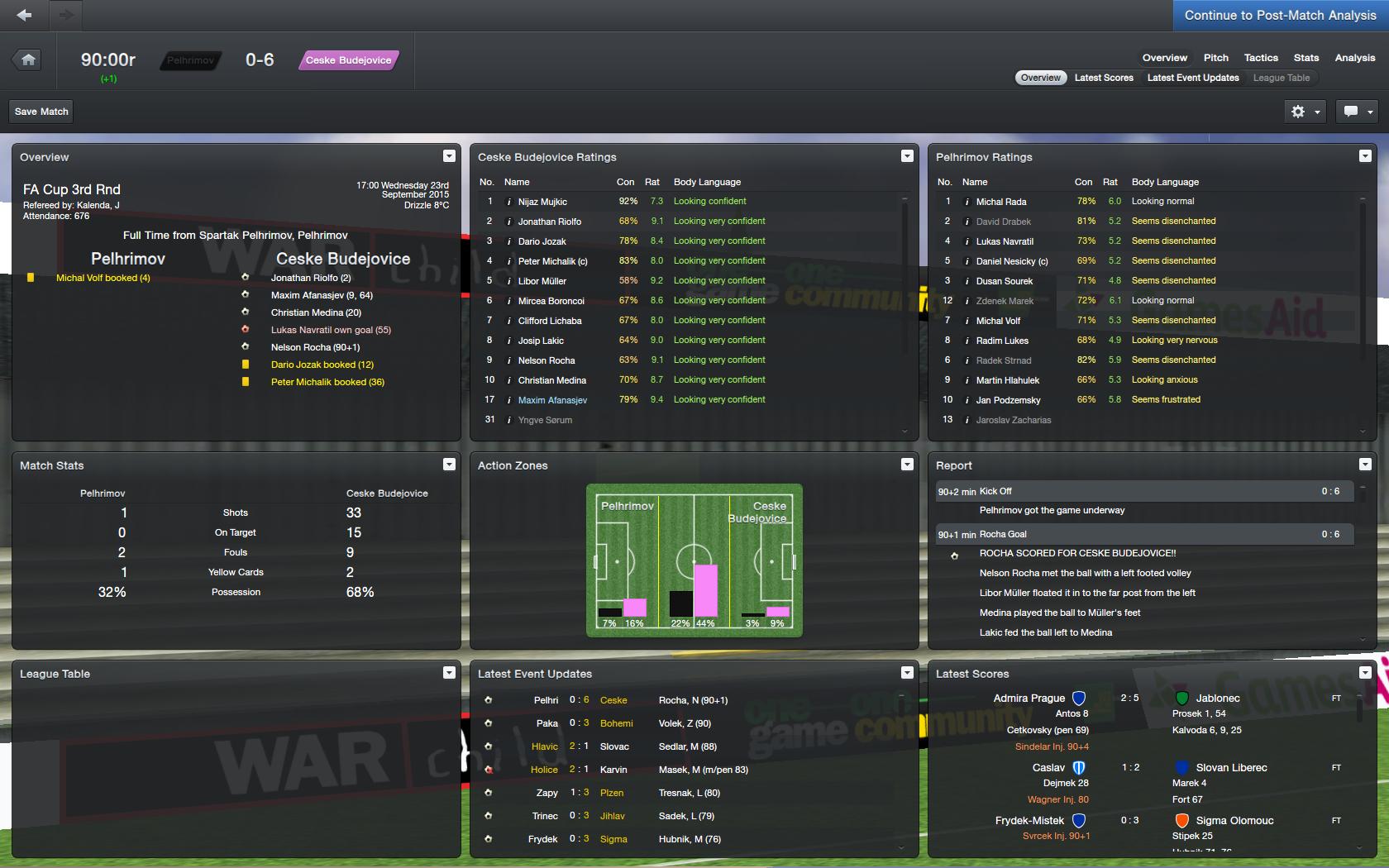 Kiwi
7 years
I'm am managing to sell my under 21 players for between circa 110K-300K each, and the prize pot for the FA Cup is only 35K? Go figure. My Board expect at least quarter final qualifications this term, and I am confident that we will achieve that.
Login to Quote

Kiwi
7 years • Edited
We will play Second Division side Jablonec in the Fourth Round of the Czech FA Cup.

Kiwi
7 years
Thanks Or, I am pretty confident we will, but with these knockout comps, you never can tell. We were knocked out in the Third Round last year by Second Division side Sokolov, albeit on penalties.

Kiwi
7 years • Edited
Case in point, wouldn't it just suck to be Phil Jones about now?

Unfortunately, on the power cut required replay, QPR couldn't pull up the upset again...Man U prevailing 2-0.

Kiwi
7 years • Edited
Third round seems to be where everybody becomes sloppy!

Kiwi
7 years • Edited
To coin a phrase, Bollocks Man......I've just had a power cut, which was only for a fraction of a second, but it means I have lost all my progress for today, meaning I'll need to replay my Third Round FA match.

Kiwi
7 years
Apparently my (yellow) card carrying midfielder Lakic has set a new records for assists, with 8!!
Login to Quote

I'll readily admit that I was spitting chips when captain for the day Michalik was sent off for his second card after ten minutes, and if that wasn't enough, I was ready to slap aforementioned captain after the opposition scored after 15 mins.

We rallied late in the first half through Jozak, to go to the sheds one all.

Losing Afanasjev and Boroncoi in the second half to injury, Savic scored the winner, five minutes from time. Having controlled the possession stat, I would have picked us to win by far more than one goal had we kept eleven men on the pitch. 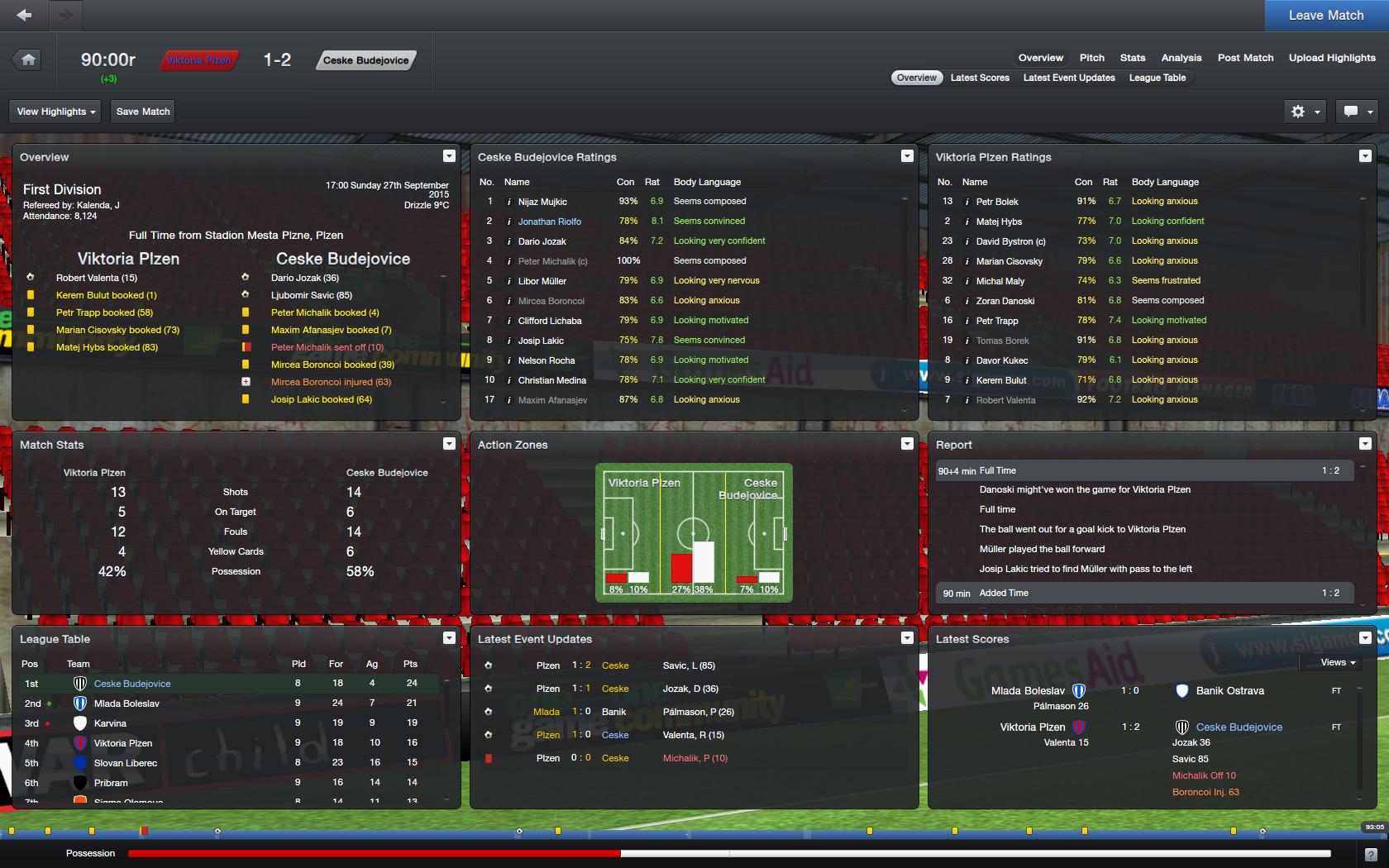 Kiwi
7 years
Michalik has been fined two weeks wages for his red card, and we'd had to have the chat about professionalism.....but, that is not the worse news!!

Afanasjev is out for four weeks with a pulled hammy;

AND (this is the kicker)

Defensive midfielder Boroncoi, who had been a fixture in the side, and adept at closing down opposition attacking movements, is out for 9-11 months, after damaging cruciate ligaments in a late tackle.

I'll need to do some recruiting in the next transfer window to shore up some positions, for the moment, Cajic can cover for the moment in the run on squad, and we have Fernando coming in January 2016, but I don't think it will hurt to have more appropriate cover arranged if possible.
Login to Quote

Kiwi
7 years
This looks like he could be the replacement for Boroncoi, if I can get him for the right price. Scouts are convinced that I could get him for between 90-110K, when all the other targets are the thick end of 1M.

Only disadvantage is that the transfer window doesn't open until the last week of January.... 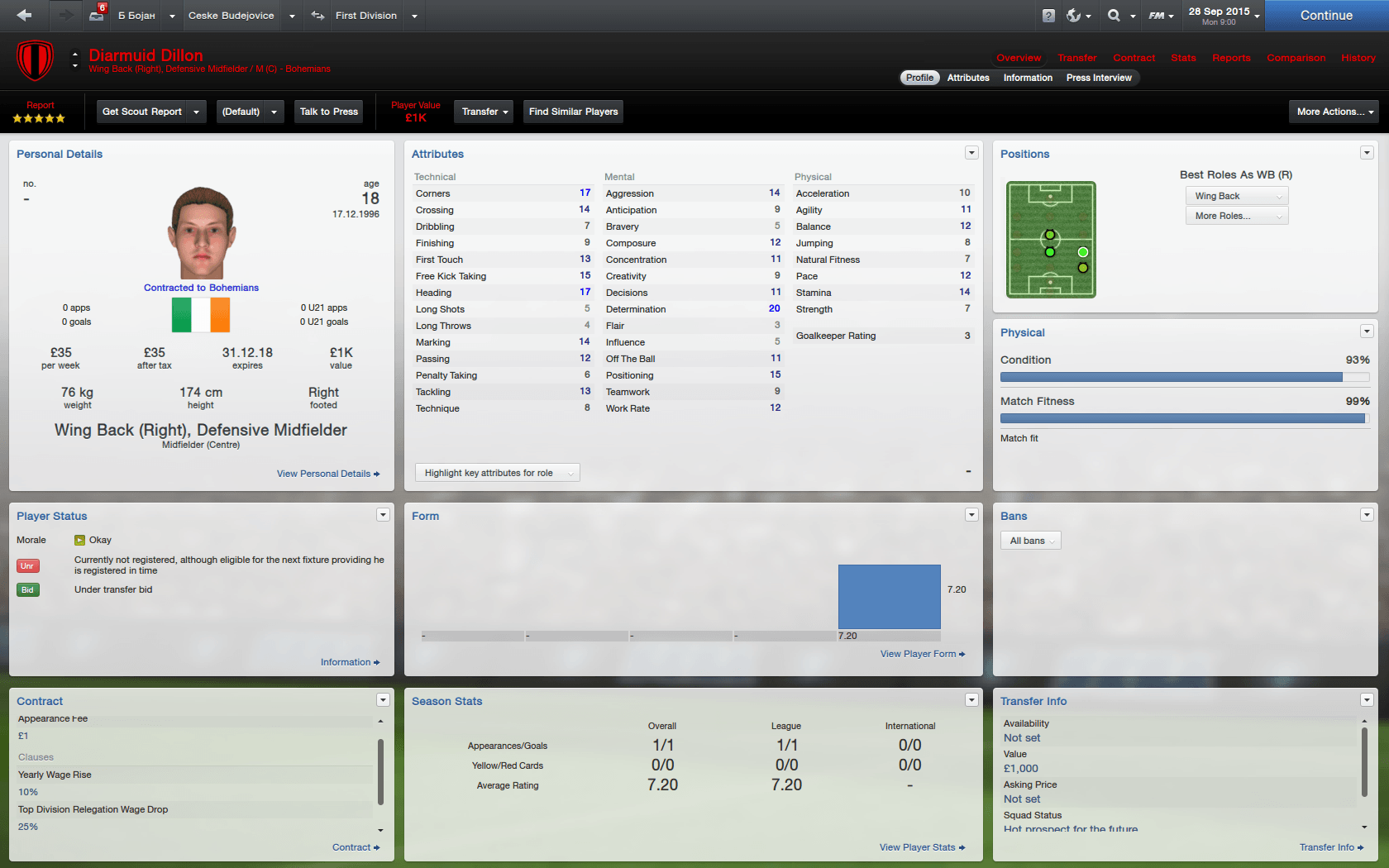 He'd also cover the right defender and midfield slots, so would be a bench riding utility at any rate.
Login to Quote