Kiwi
7 years
I think someone should have told him with an eleven month recovery on an injury, he is out for the rest of the season, and some of the next....and he is worried about missing the next game.

Kiwi
7 years
This actually explains why we had never finished above sixth place in the league before now....

Kiwi
7 years
Another coach gets more qualifications - we pay for it this time!

Kiwi
7 years
Which new feature is that Rookie? The one where coaches run away and get their coaches badges by themselves?

This is a different team this season, they are far more hungry and make more of the chances afforded them. At home, against Olympic Lyonnais, we had a chance to make a statement, despite the loss of two key players in the previous game.

I am pleased to say that we controlled possession and the rest of the stats were relatively even, although it would be the first match in a while where we have not draw cards.

The scoring was complete in the first half, which a brace from the reinstalled Savic, and an exquisite free kick from Medina bang on half time. Both sides had injury problems, with us losing the talismanic Medina, and LOL losing right defender Cissé. 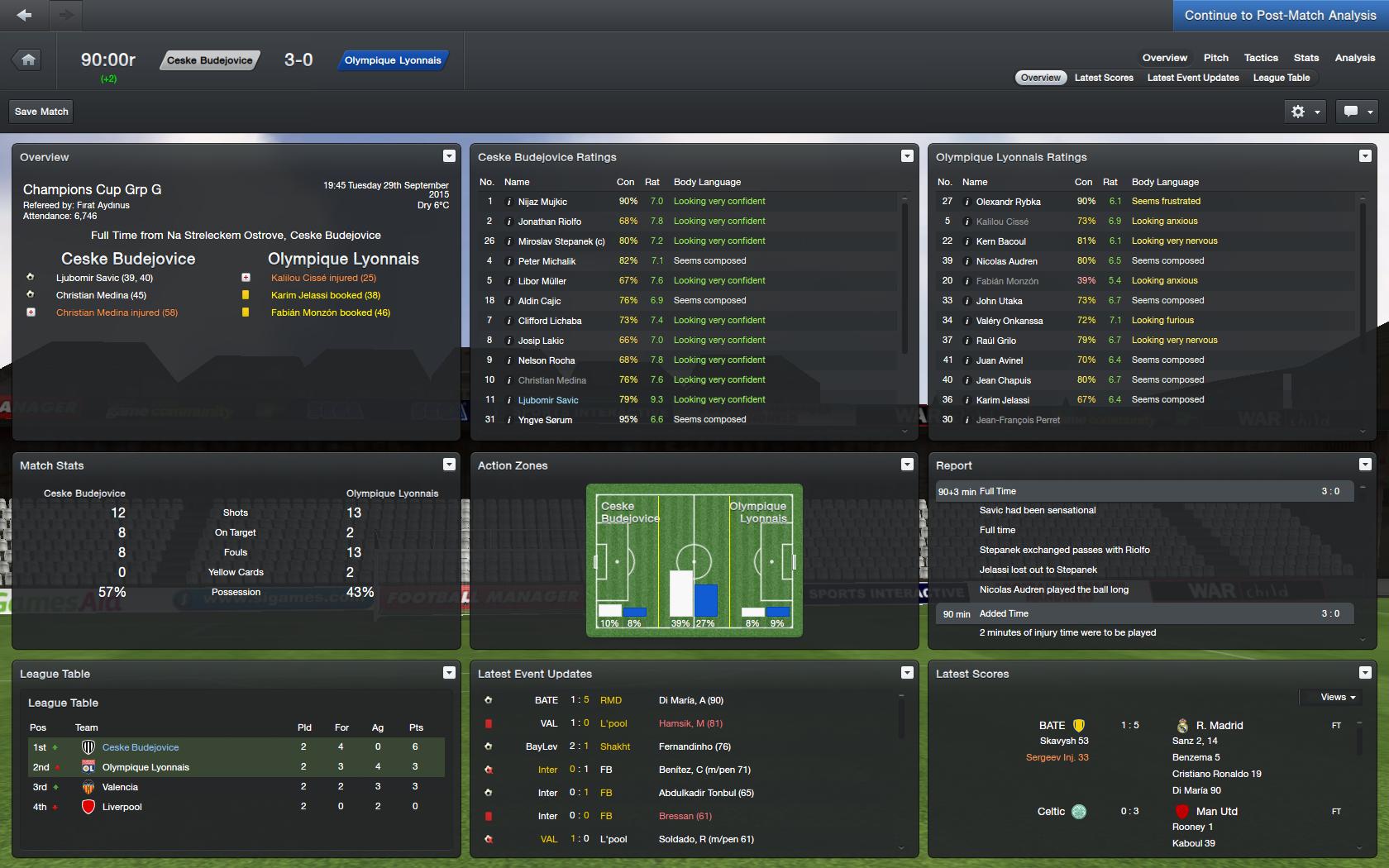 Kiwi
7 years
And the injury toll has not been kind to us, with Medina out for three effing months. Whilst not a prolific scorer, the kid can run.

Kiwi
7 years
After scouting around the place, we have discovered it is impossible to replace Medina without spending tens of millions of dollars, which is surprising given he was a free agent when I joined Ceske.

Whilst my starting tactic can be adapted for the lost of Medina, and I can deploy another winger without too much hassle, my backup tactic called for the wingers to be the ML or MR, which are in short supply.

To that end, my scouts were sent forth to find a young player who could play both sides of the tramlines, and surprising I found yet another cheap Irish gem plying his trade at Bohemian F.C. in Ireland.

Not only does he want to come, but he is comparitively cheap, so that has made me more determined to bring him into the fold.
Login to Quote

Kiwi
7 years
I like their style, I'd love to bring them in as an affiliate;

Bohemians youth section has about 250 players from the ages of 8 to 17. The club runs 15 teams who play in the DDSL.

Bohemians currently train in Royal College of Surgeons close to the airport.

The main aim of the youth section is to produce players who are good enough to play for the first team. The youth teams have made a solid start to the DDSL season with the Under 15s, Under 17s, and Under 18s all battling for honours.
Login to Quote

Still within wage and salary budgets;

Profit of GBP2.1M, being prize money and sale proceeds of under 21 players;

Undefeated during month, including superb wins against Liverpool and Olympique Lyonnais;

Diarmiud Dillion accepted transfer to Ceske, and fellow Bohemians player Paul Davies also considering a transfer, but we are competing with Blackpool for his signature;

Defender Michalik and starting midfielders Lakic and Lichaba have all impressed in training for the month;

Keeper Mujkic and right back Riolfo have impressed Ass Man with progress over the past three months;

With a home crowd of over 4,000, we put in a strong display, and whilst we never looked like losing, we did concede two late goals. Savic put us ahead early with a brace, and from there, we never looked back, with both the midfielders scoring.

We conceded a well worked move on the left side, and then again when keeper Mujkic ran out too far and didn't collect the ball. 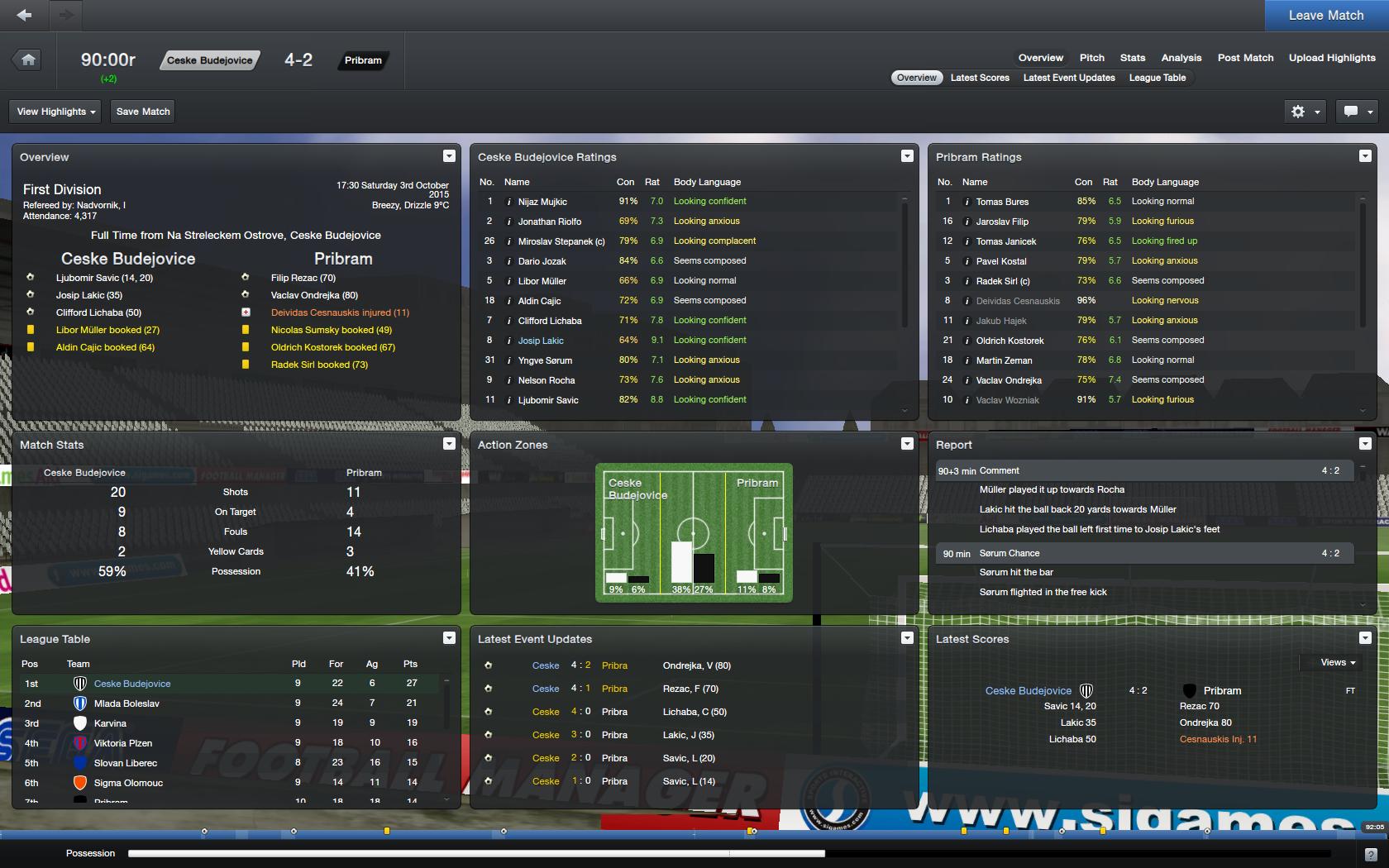 Kiwi
7 years
Striker Savic and midfielder Lakic have been selected in the team of the week.

In other, unrelated news midfielder Dudas is concerned that he isn't getting first team football. Guess I will have to put him straight.
Login to Quote

Kiwi
7 years
During the international window, our Ass Man is waxing lyrical about the recent training performances of keeper Mujkic.

[Is it just me, or does that name sound a little like Magic?]
Login to Quote

Kiwi
7 years
Just what I didn't need, my second South African, the defensive utility that can cover DRLC, is also injured....is there something in the water?