David Beckham has grown to become the next Pep Guardiola, albeit on a somewhat lighter scale. 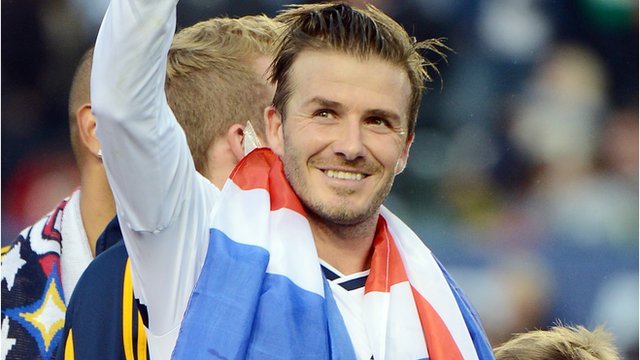 Although he started badly, the 38-year-old has now led Aston Villa to 7th in the table in January, even beating in-form sides like Manchester United, and Villa chairman Randy Lerner is probably thanking his lucky stars he didn't sack the former England captain after the Lions' poor performances last season that almost led to relegation.

The North London rivals are both manager-less and doing poorly. Instead of building on their terrific 2nd-placed finish last season, Tottenham have instead fallen from grace, currently 6th in the table. Their Emirates Stadium counterparts are worst off - currently 11th in the table.

The London neighbors are expected to go head-to-head with each other in a 'competition' to bring Beckham back to his hometown in London. 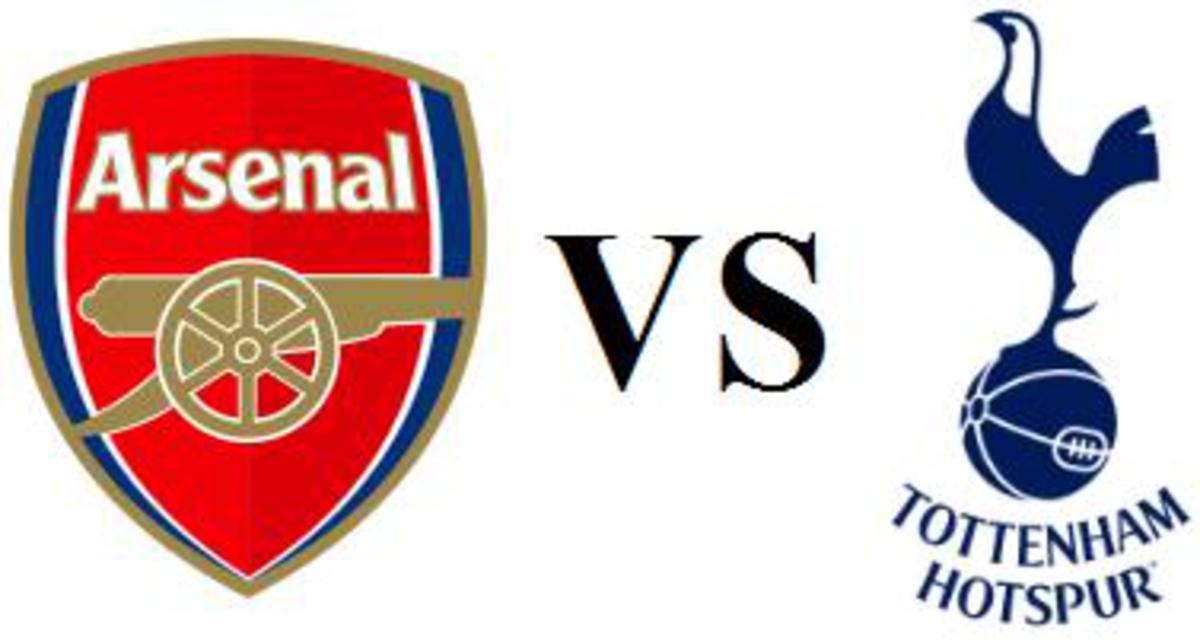 And the Gunners have indeed made their move, as close sources to the club reported. 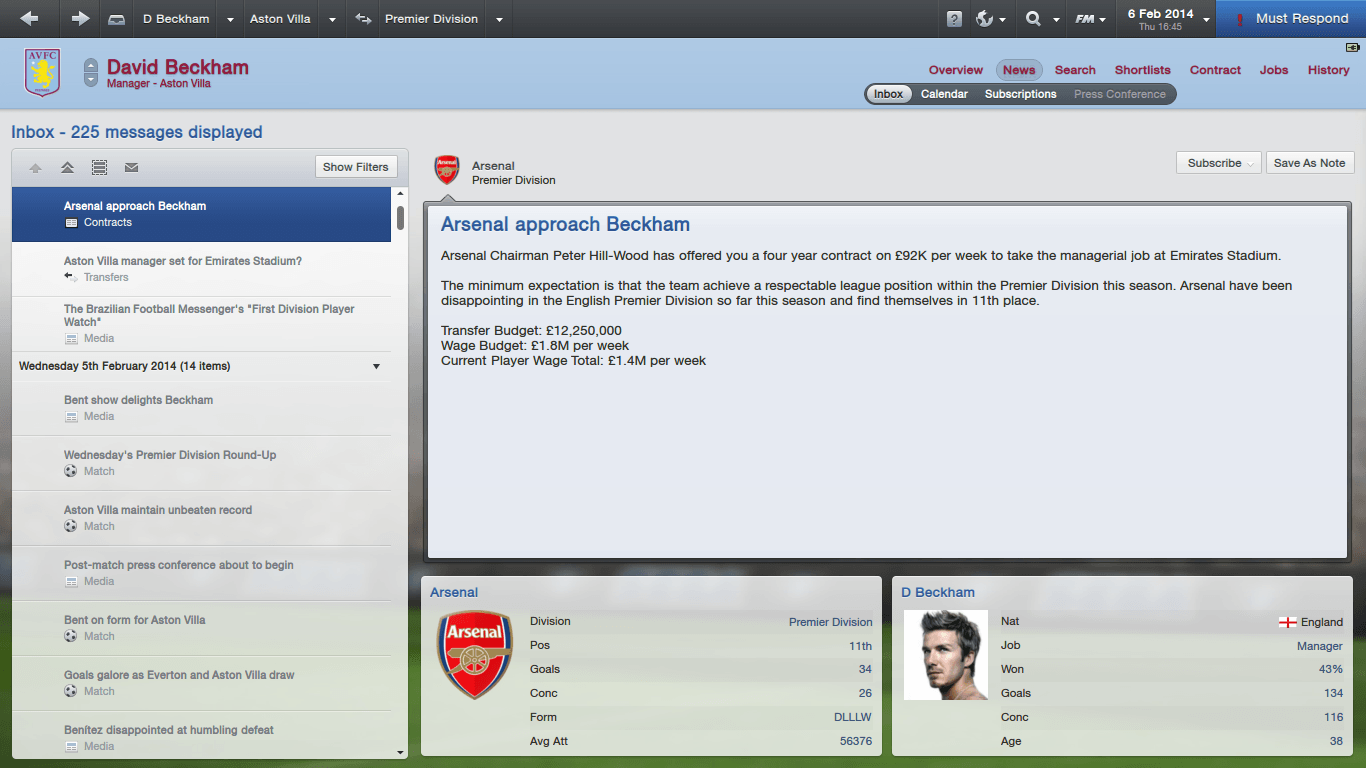 Aston Villa club officials have also confirmed this news and Randy Lerner came out publicly to reveal that he "personally allowed" Beckham to talk with Arsenal, saying that "he knew an opportunity like this could not be passed up".

Fortunately for Villa fans, Beckham refused, instead opting to stay at Villa Park. 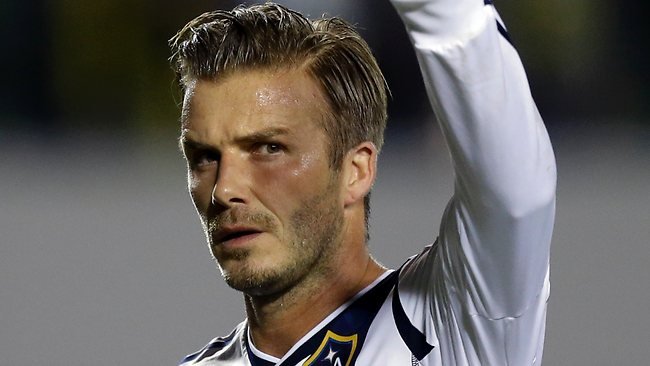 Beckham's move will have delighted fans, with Arsenal having reportedly offered him at least 90,000 per week, 40,000 more than what he earns at Aston Villa.

Beckham himself has declined to comment on the matter but later confirmed on the club website that he was staying at Villa.

"I want to finish what I started," said the manager.
Login to Quote

Seni
9 years
you turned down Arsenal for vila

patrick1
9 years
cannot believe you got hernandez playing for you lol even though only a loan and nice story. im really liking this. im glad you stuck with villa hopefully turn them into a force once again cos that arsenal transfer budget is i find an insult lol
1
Login to Quote

Jamesg237
9 years
Good decision turning down Arsenal. Stick with the Villa and just keep progressing. A good story so far, keep it up.
1
Login to Quote

Justice
9 years
Glad to see you stayed at Villa, I hope the trophies start coming in soon

Glenn T
9 years
Thank you for the brilliant comments!
Login to Quote

Clint Dempsey has earned a recall to the U.S.A national team, just three weeks after signing for Aston Villa. 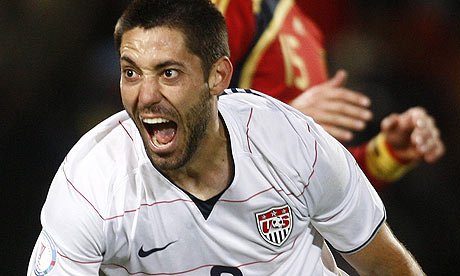 Manager David Beckham rescued him from his one-and-a-half season nightmare at White Hart Lane, paying 2.9 million for the American forward.

And after 4 appearances for Aston Villa, where he scored one goal and impressed, national team boss Jurgen Klinsmann has decided to recall Dempsey for a friendly match against Colombia, where fellow teammate Brad Guzan has also been called up.

"Clint is a great player," said Klinsmann. "It was simply a matter of whether he was playing regularly for his club or not. At Tottenham, we were afraid his ability suffered due to being on the sidelines for long periods - but now he's shown that he's still at his best with Aston Villa, so I've decided to give him a recall."

Dempsey himself had this to say: "For the past few months, all I've been thinking about is this. A recall. It's unbelievable I'm finally going to play for my country again."
Login to Quote

Aston Villa have continued their unbeaten run in the league, stretching it to a magnificent consecutive 13 games unbeaten, in the face of opposition like Chelsea and Everton. European qualification now looks like a so close, yet so far possibility. The standout performer of the month is surely Darren Bent, who has scored in all three of Villa's Premier League fixtures this month - including a hat trick against Everton. 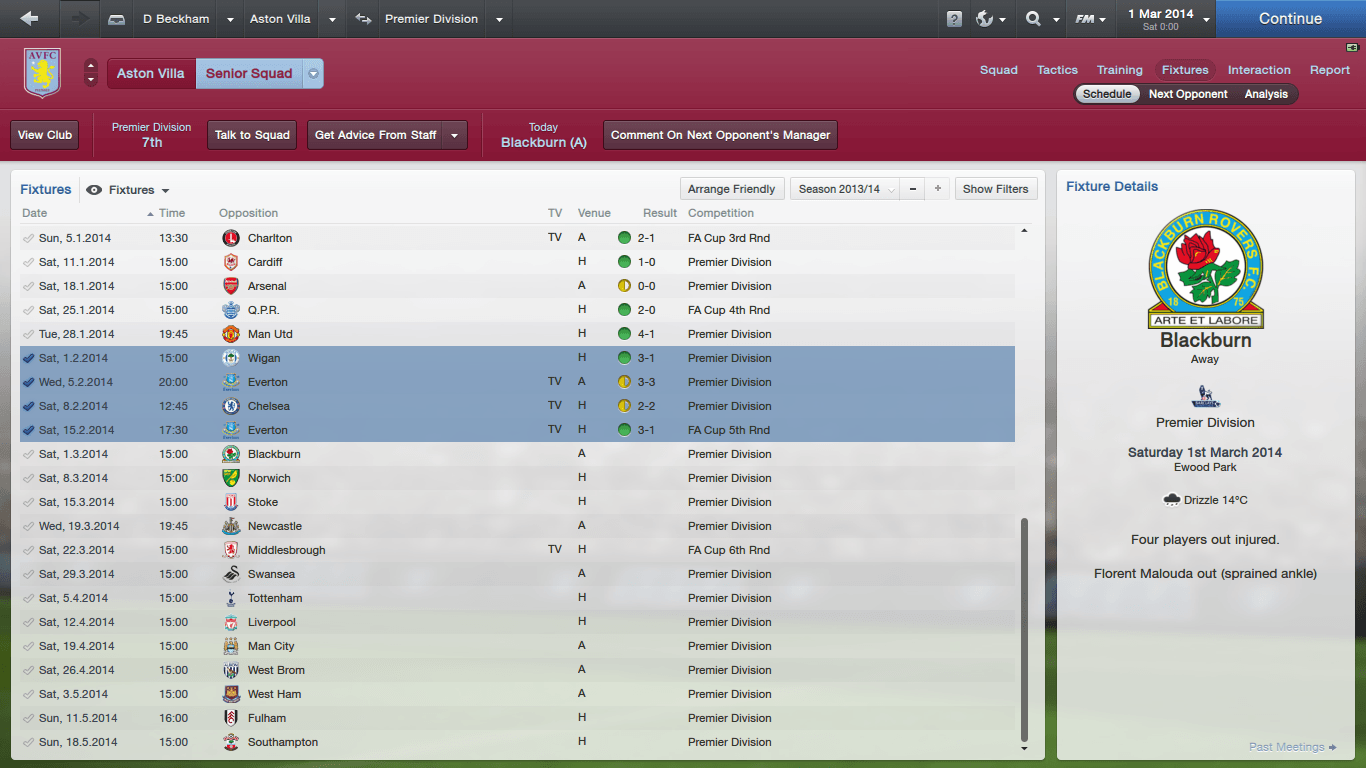 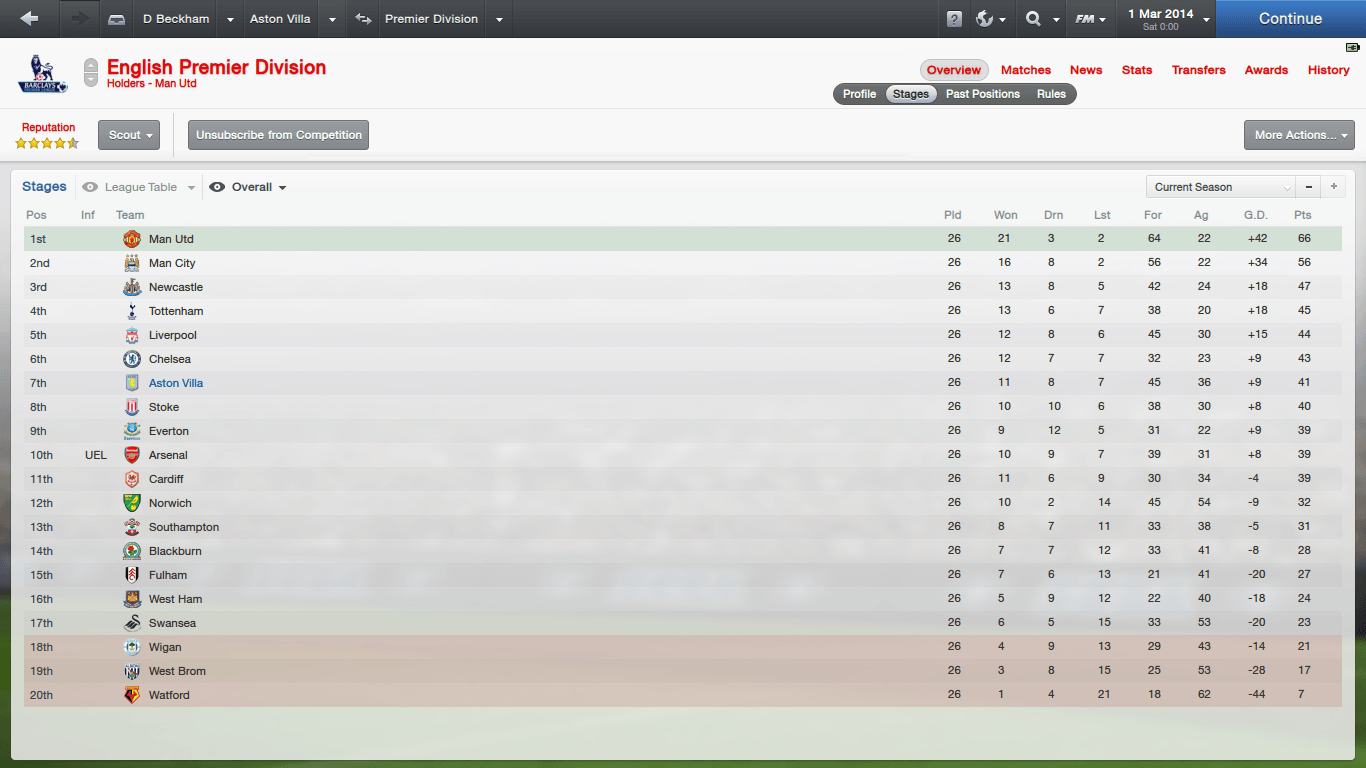 Doria has been amazing as well this month at the back and has duly came runner-up for the Young Player of the Month. 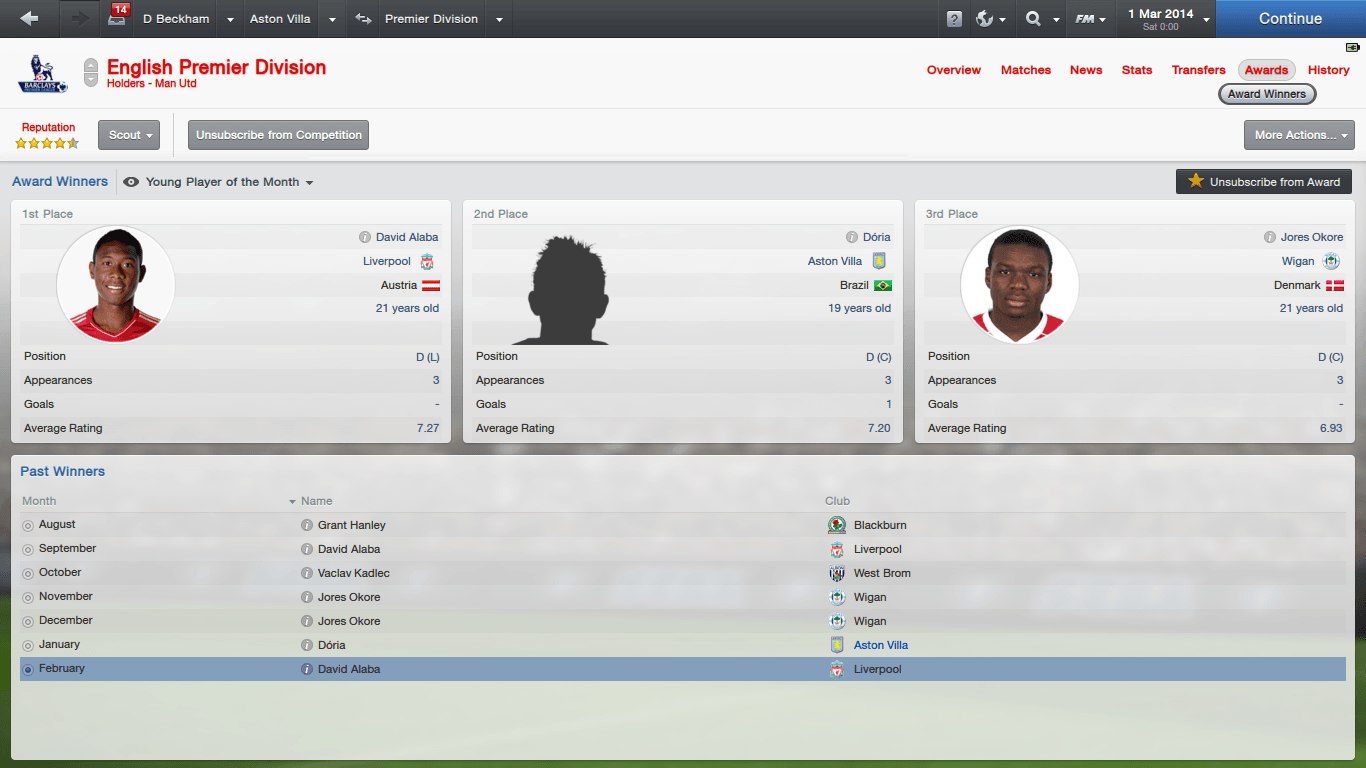 Phil Cannon: Shit, I'm sorry. I just got too excited. It's one of the youth candidates that we are taking in this year from the academy. He's quality. I've seen him in training.

Phil Cannon: Here is the report I've done on him. 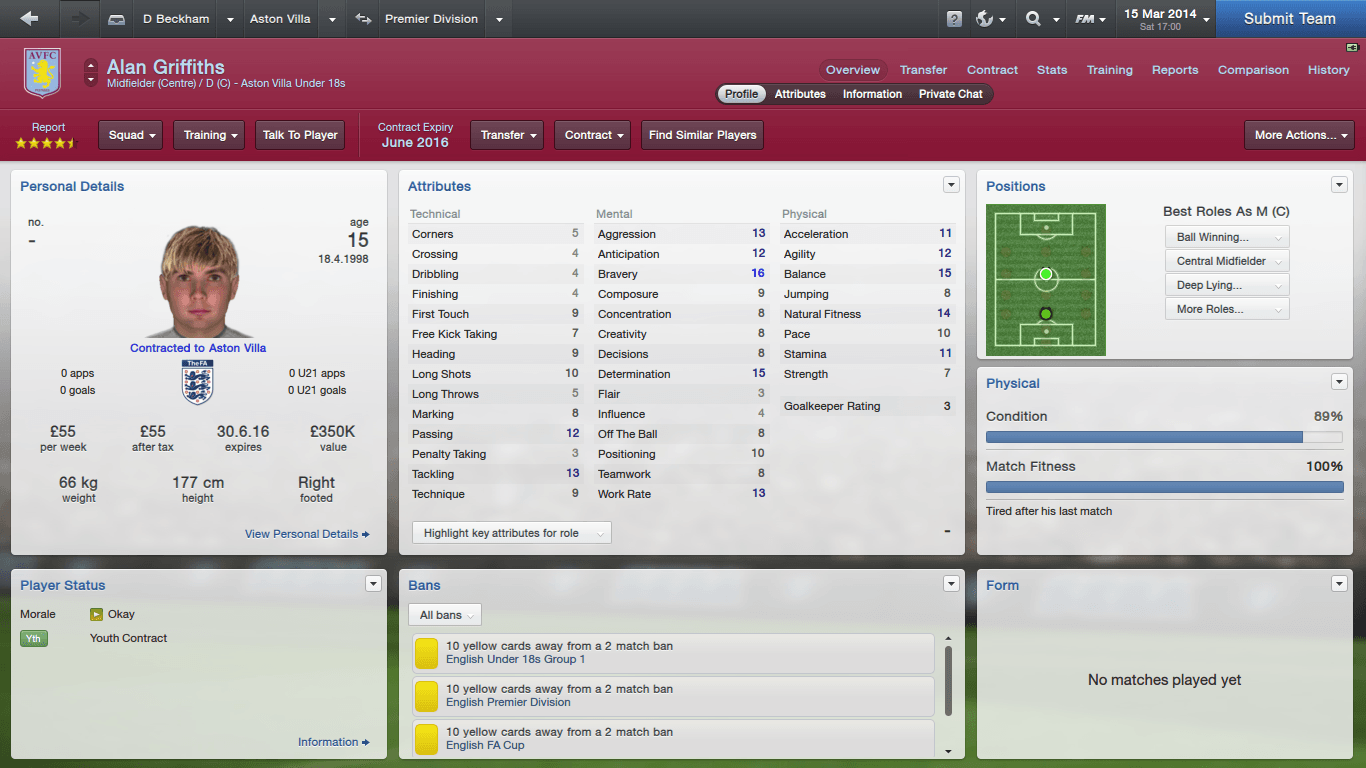 Phil Cannon: The youth candidates are going to have a match against our club's Under-18s.

David Beckham: Right, I'll be there to see how this boy does.

Aston Villa's star striker Darren Bent has reached 50 goals for the club after netting a brace in a 3-2 win against Blackburn in the Premier League on the weekend. The England man's impressive tally for Villa is now 50 goals in 91 appearances after joining from Sunderland in 2011 for a record-breaking fee of 20 million.

He has regained the goal-scoring form that saw him score 24 goals in the 2009-10 season from Sunderland, after a less-than-impressive first two seasons with Aston Villa.

"It's amazing," said Bent. "I didn't even know it was my 50th goal. 50 in 91 appearances is a really good stat. I'm currently enjoying my game with Villa and look forward to scoring more."

He also adds on about current manager, David Beckham.

"When I heard about Arsenal offering David the job, I was sure he would be leave. I'm more than glad he didn't. David has been improving my game so much, I feel that if he left - it'll be hard for me to keep scoring."

As of March, Bent has 16 goals and is 4 goals away from Arsenal's Olivier Giroud's goal tally of 20. The Frenchman is currently sitting top of the goalscoring table and is tipped to win the Golden Boot at the end of the season.
Login to Quote

It was another unbelievable month for David Beckham's side. Despite their unbeaten run being ended in the hands of Stoke City, they went on to crush Norwich and Swansea 5-0 and 6-0 respectively, and also progress to the Semi-Finals of the FA Cup at the expense of Middlesbrough. 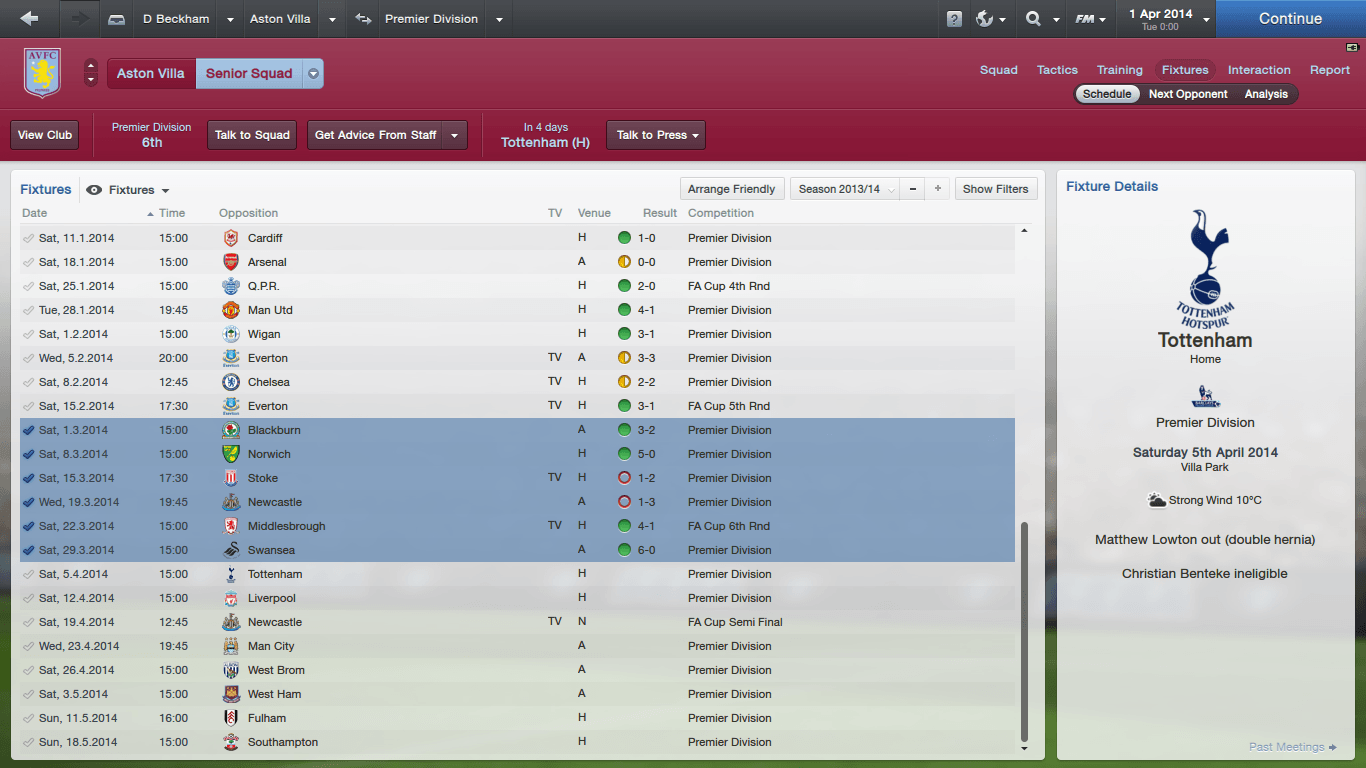 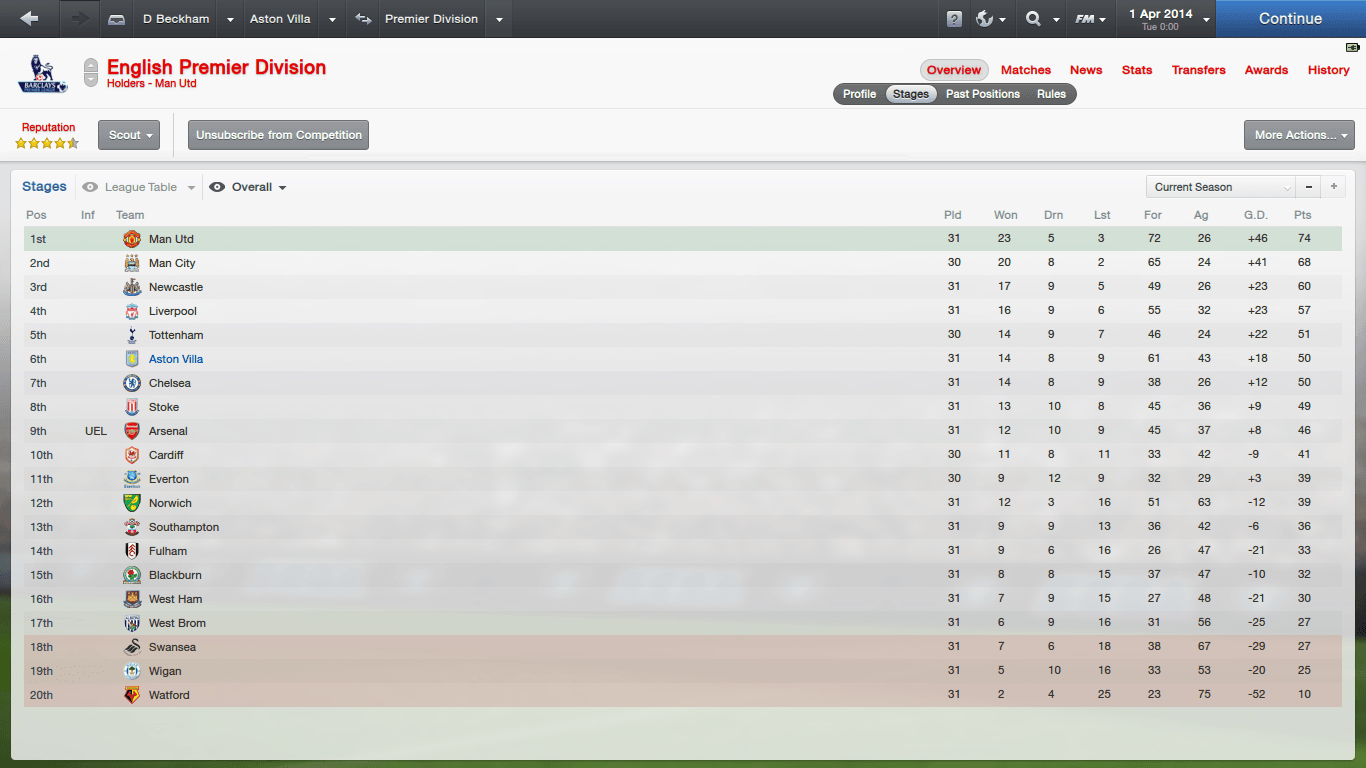 Not related to the month, yet an impressive feat as not one, not two, not three but SIX Aston Villa players made the Team of the Week after the team's impressive display against Swansea. 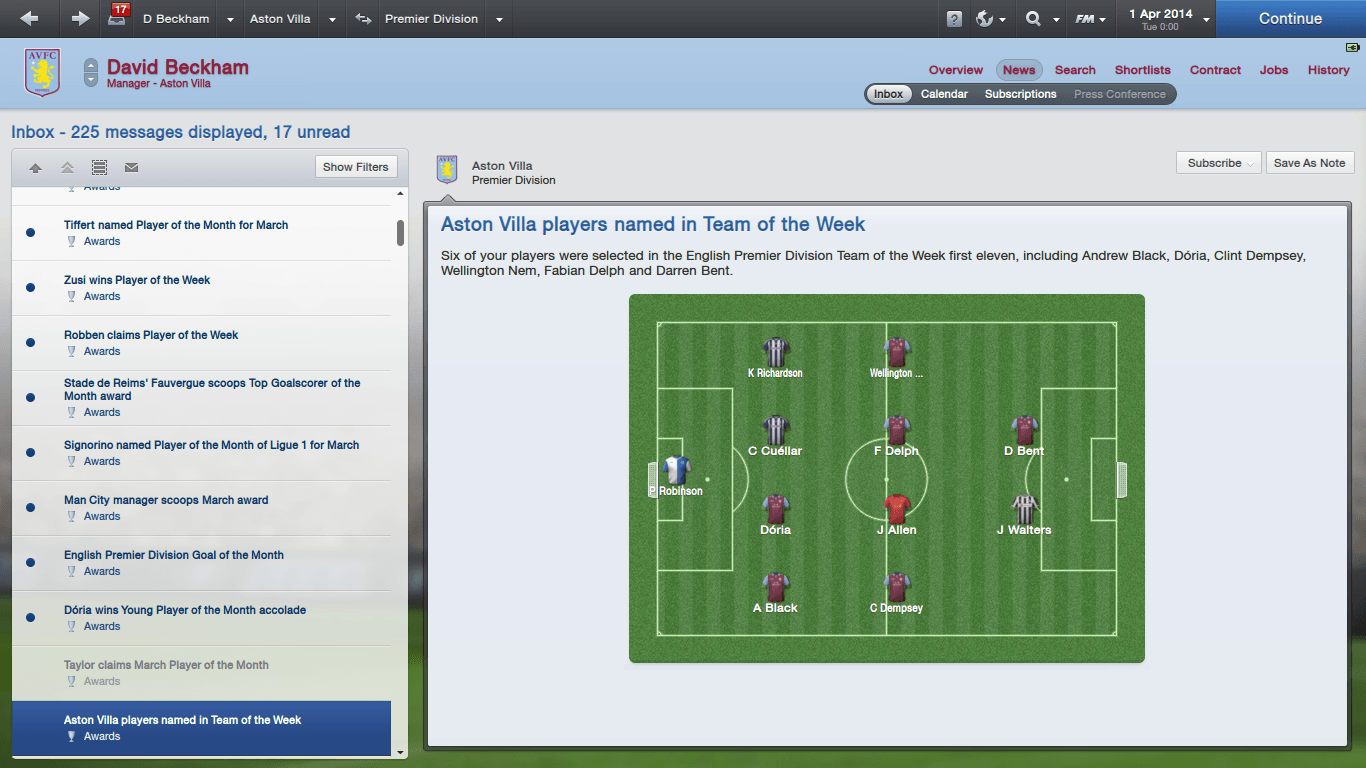 Fabian Delph is also runner-up for Player of the Month.