Blue
9 years
Pfft, like I'd be seen at a nightclub

Sorry, do I know you?


We were coming in to this month with a lot of optimism and in very high spirits. We were looking to close the gap on the top of the table. Could we do it?

We were very poor this month, slumping to three defeats, two draws and just two wins. Our midfield was very weak and it will need to improve for the rest of the season. 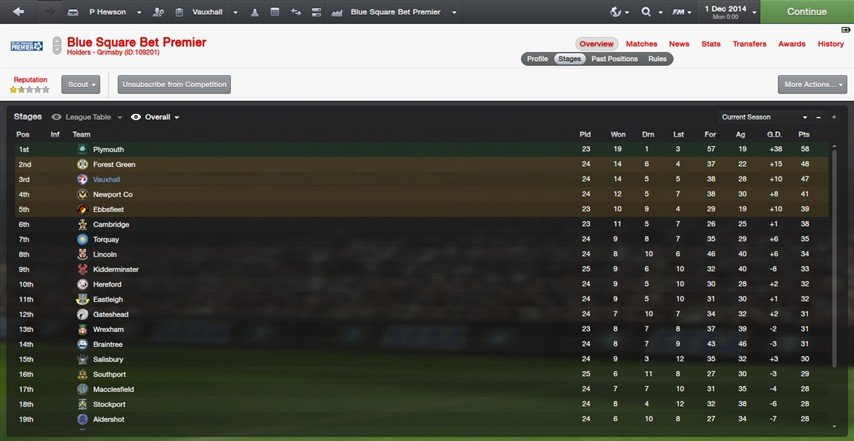 We have dropped back down to third but luckily we still have a relatively safe gap from sixth place. Hopefully we can really push on and change our form quickly.

December will be a key month for us as we will look to recover from our poor run. There is no better time than the festive period either, is there? Hopefully we can play some good football and get some good results.
Login to Quote

Once again, I sincerely hope so


After our very poor results in November, we were starting to slip away from the league leaders, Plymouth. With possible promotion on the line, we were looking to change our fortunes and get some points on the board.

We didn't win our first two games but we claimed four consecutive wins after them. We showed great ability to turn around our poor run of form and we showed a great scoring ability, thanks to Anoruo and Wilde up front for being the scorers on most occasions. Our 3-0 win against Aldershot was the pick of a good month for us as we showed our class in front of an expectant home crowd. Michael Wilde has been magnificent, scoring six goals to prove that he still has a clinical edge to his game. 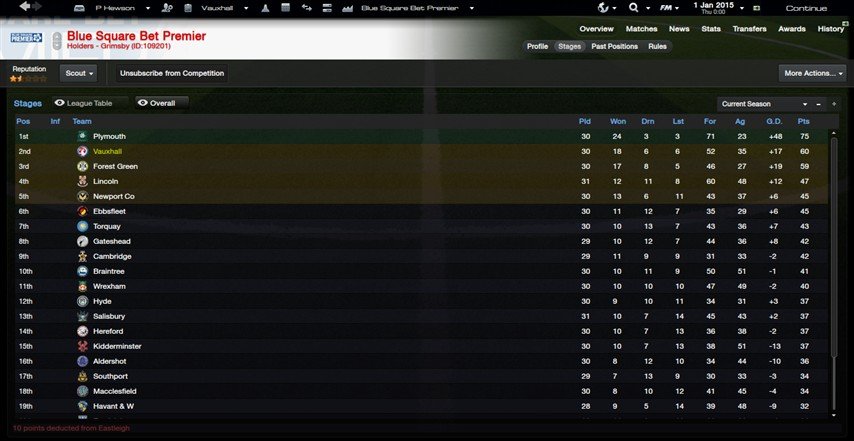 We move back up to second place in the league but there is a staggering fifteen point gap between us and Plymouth now. I think that it is almost safe to say that they will be champions and we will be forced to fight it out for a second place finish. If we can stay where we are, we will have done very well.

We have five games next month which can be seen as winnable. I will be careful with my comments this time and just say that we will try our best to win these games. Results this month will be important if we want to make a last-gasp dash for the title. Our strikers will be our key players, as they have always been, and you can expect some tasty matches to come!
Login to Quote

Jamesg237
9 years
It looks like the top spot is starting to be a little out of your reach but a play-off spot is a definite possibility. Keep going Justice!
1
Login to Quote

Yeah, the league title is long gone by now


After we recovered from a loss in form, we were looking to drive a home a statement that we are genuine promotion candidates. The turn of the year is not only a festivity but a time when new vows are made, when a new year of a million possibilities begins. Could we open 2015 with a bang?

Two wins and two draws, respectable results in my book. We got what we deserved in the end but we would have liked more points. We opened with two draws against Cambridge and Alfreton, who both battled hard for the result. We did well to come back in both games to claim a point. Eastleigh was a tense game but we scraped a win though substitute Tom Rutter. We then went on to pummel Havant & Waterlooville 3-0 at their place, with Wilde, Anoruo and Mahon all on the score sheet. There weren't any stand-out players this month, and it was indeed a team performance which kept us unbeaten. 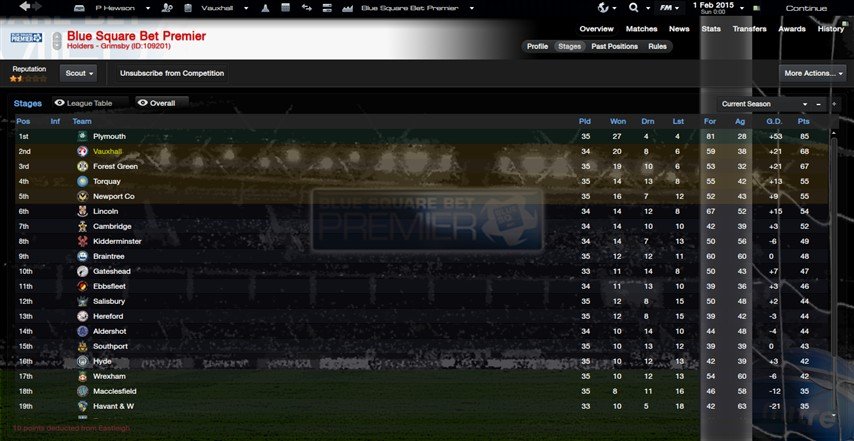 We are still in second with a game in hand over Plymouth but the gap is now seventeen points. It is too big a gap for the best of clubs to bridge and we will still be looking to finish in second place.

Four games next month as we will look to continue our form. Not any particularly challenging games but we will take them all seriously, never-the-less. With hope in our hearts and glory in our minds, we will march on singing a soldier's song!

Glenn T
9 years
Loving it. A poor first season in the BSP but now in the second season you're looking awesome. Title seems a bit too far now but getting the runners-up spot and promotion doesn't look too bad either. Keep it up Justice!

I just want to keep pushing forward and hopefully get promoted

Jer
9 years
Hopefully? You will get promoted!
Login to Quote


We started 2015 undefeated but we were looking to push our game up and prove our worth. Play-offs looked like a certainty but the battle for second place was still open between us and Forest Green. We were ready for a fight with them but who would win?

We were poor, only picking up one win. We struggled to create enough chances in games this month and we suffered the consequences dearly. Kidderminster showed us that they are no push-overs and the two games against Guiseley and Ebbsfleet were frustrating for us. We need more creativity in the side to produce the kind of magic that wins games. 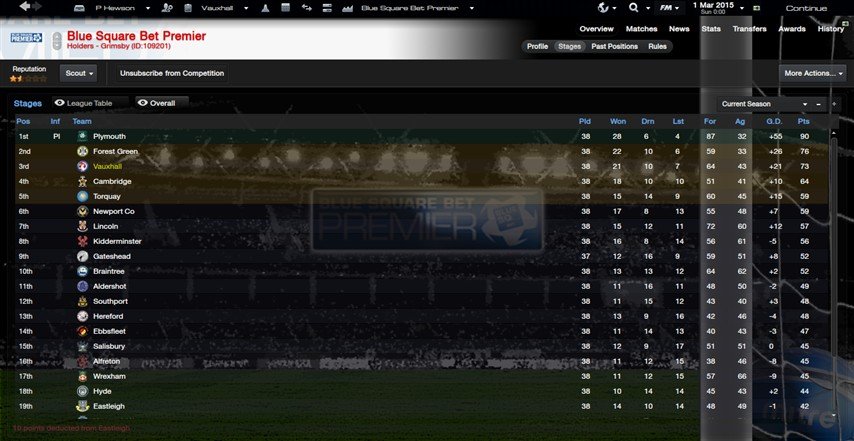 We have deservedly dropped down to third place as Forest Green moves ahead of us. We have proved to be better goalscorers than them but they have conceded fewer than us. With just eight games left in the season, anything can happen. Hopefully we can climb back up to second place!

We have four games next month, including a tricky trip to Newport County. Our home games will be important and I will want to win them. With our squad looking forward to possible promotion, we want to make a good show for the fans to prove to them that we are capable of gaining promotion. It is time for the final push!
Login to Quote

Blue
9 years
Not the best month, but at least you're still in the play-offs