I really want to do my best for FM Scout

I hadn't realised that the match was televised until you just said it lol. Makes it even sweeter to beat the then-league leaders


After our impressive run, we were looking to climb up the table to sit just behind the current play-off places. With a high amount of confidence and a nice break between matches, we were looking for three wins from three.

Well that was dreadful. We just played poorly in each game. This has hurt our confidence and our promotion hopes. We now have it all to do in the final few months to somehow pummel through the other teams for promotion. 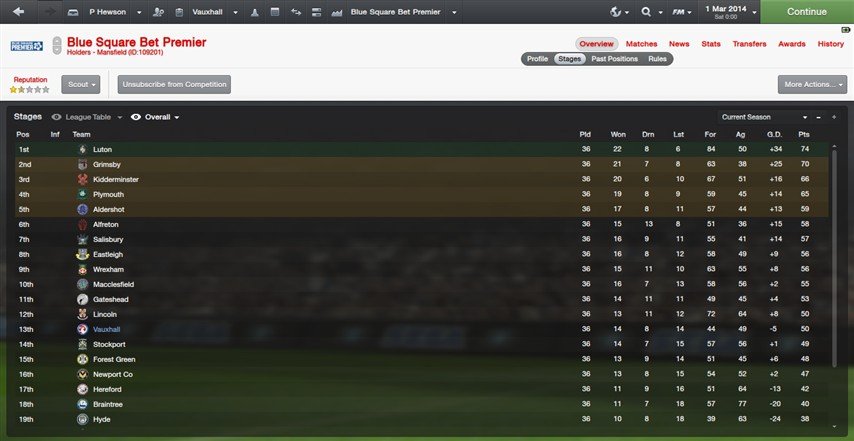 As you can see, we are now nine points away from fifth place. We need to start picking up wins and fast. The task isn't impossible, just very unlikely. Hopefully our form will pick up anyway.

We will have six games in what will be our penultimate month in the league. With four tough away trips, we will be looking to beat fellow promotion contenders Gateshead, Macclesfield, Alfreton, Eastleigh and Southport. They will be hotly contested games but ones I hope to win.
Login to Quote

I really do hope so

JasonRM
9 years
Not so great month, but you're still far away from getting relegated and that in itself is a great achievement. Keep up the good work and keep posting updates because I'm loving the story!

2013-03-22 01:02#86411 The Madridista : Not so great month, but you're still far away from getting relegated and that in itself is a great achievement. Keep up the good work and keep posting updates because I'm loving the story!

I will just keep pushing on and hoping for the best

Kane
9 years
Loving this story Justice, getting a solid league position, hope the results come in for you soon!

I'm so grateful for all the support

Toon
9 years
Make that final push- it's possible. I BELIEVE IN YOU.
Login to Quote

Jamesg237
9 years
So glad you decided to stick with the team and not jump ship. Best decision you will make I can assure you of that


I hope we can do it

I could never leave


With a sudden dip in our form, promotion was looking very unlikely. We needed to be at our best for the rest of the season to make promotion possible. We had a great deal of hope but we needed to turn that in to performances.

We were dreadful. We didn't show our class at all. Our inconsistency in this set of results is a perfect microcosm of how our season has gone. The players were poor and we didn't deserve a single point, to be honest. 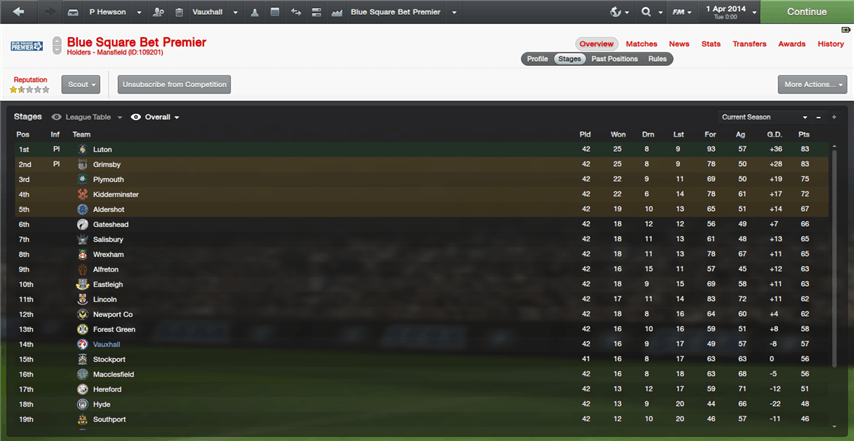 We are down in fourteenth place and it is almost mathematically impossible for us to gain a play-off spot. We will look to perform well in our final games and finish in a respectable position (where we are now or above us).

These final four games are not important to me. Our season is over and I will look to build a stronger squad for next season where we will aim for promotion. I would not mind four wins from four, however.
Login to Quote

Blue
9 years
Another bad month, but it'll get better next season.
Login to Quote

Jer
9 years
Next season will be your season. With new signings, it will be great!
Login to Quote