Onwards and upwards!
Login to Quote


This was the start of our Football League career, the start of our rise through the most reputable leagues in the world. This was going to be a huge season for us, but only if we could avoid relegation. This was my objective. Could we match it?

Our results were poor, as expected. We didn't win a single game in the league. On the positive side, we did claim three points this month, three more than I had expected. We also beat Nottingham Forest in the Capital One Cup. They are a team who had just gotten relegated from the Premier League to the Championship. We were huge underdogs but we defied the odds and took the win. Norwich outclassed us in the next round, putting any hopes we had to bed.

Lloyd Carlisle has been a superstar for us! Despite being just 16 years old, he scored on his competitive debut against Fleetwood and then came off the bench to score two and assist one in a three goal comeback against Port Vale. His future doesn't look great on paper, but he has showed that he has the true makings of a superstar! 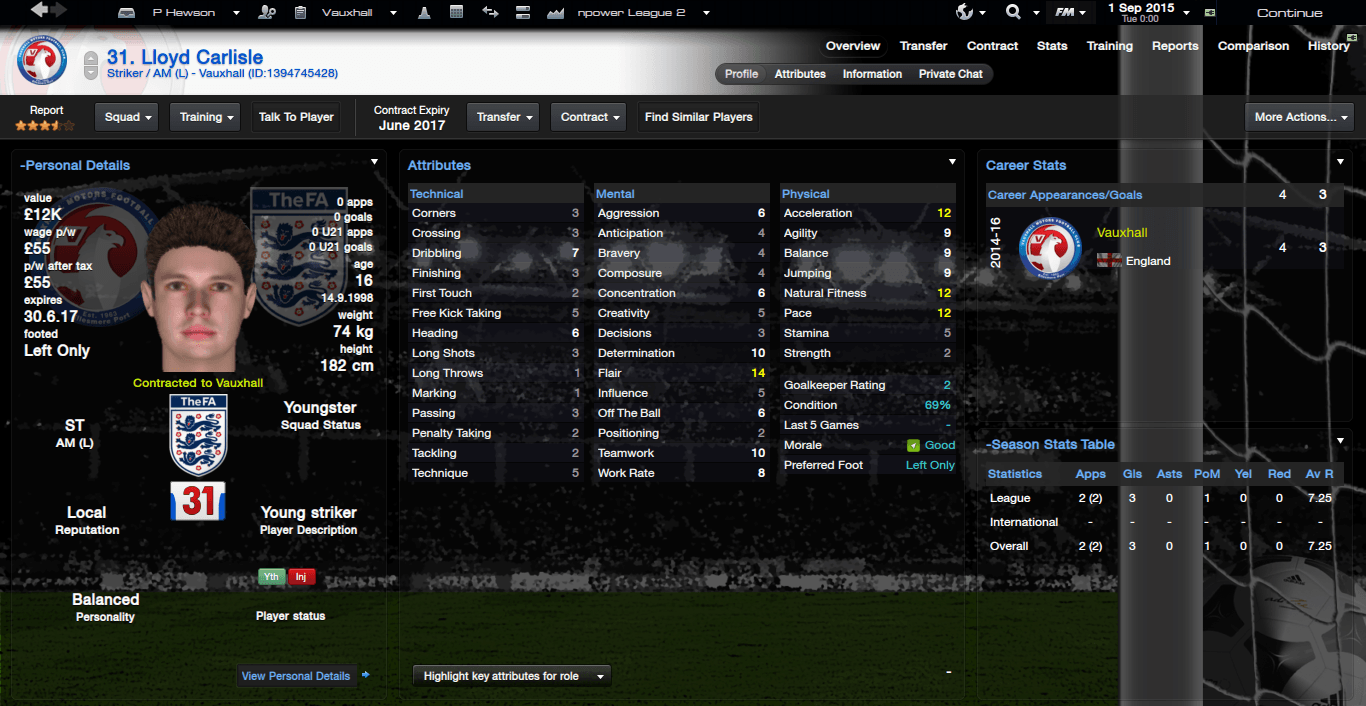 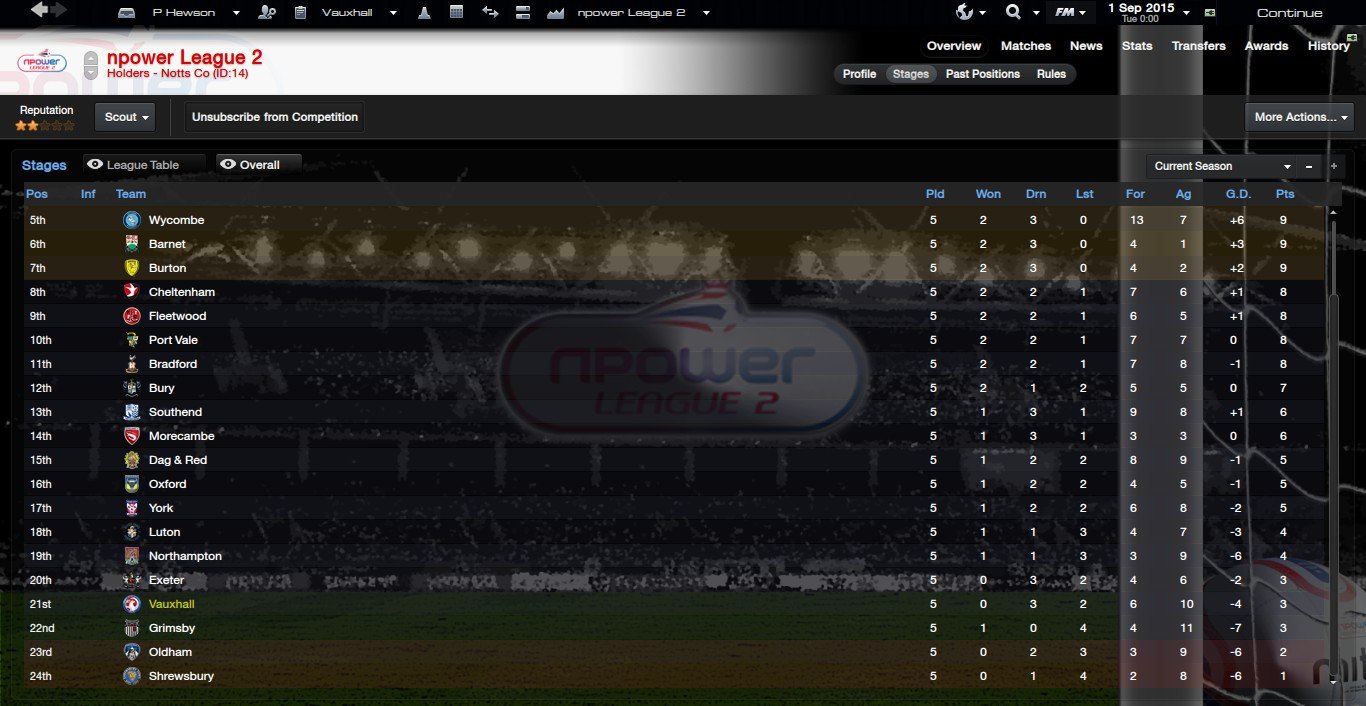 We are 21st in the league and we are in danger of going down. However, we have played just five games and we have plenty of games left to pick up points. Hopefully we can claim a few wins to keep us up.

We have eight games to play next month, starting with a very difficult home game against Preston in the Johnstone's Paint Trophy. We then have some relatively easier games this month, hopefully we can claim some wins this month to help our cause. Can we do it?
Login to Quote

Joe
9 years
Tough start, but all about the Football League...results will improve: HALA VAUXHALL MOTORS!
Login to Quote

Jer
9 years
Finishing of 3 :P! I don't blame him, but he has an incredible speed! Another Raheem Sterling?
Login to Quote

Louis O.
9 years
Nice comeback against Port Vale,but to be honest, Lloyd Carlisle doesn't look very good at all. I reckon you can fight off relegation.
Login to Quote

All he means to me is survival

Lloyd Carlisle looks terrible on paper. Put him out on the pitch, you have a little Messi

Deleted
9 years
Tough month but lord what a win against Forest!
Login to Quote

I was over the moon after the Forest game!

HullCity212
9 years
Wow Vauxhall Motors In The Football League. I Did Not See That Coming In My Entire Life.
Login to Quote


Hey guys, apologies for not updating yesterday. I was creating the FM Scout FC database and graphics. However, I return with another update

We went in to this month without a win in the Football League to our name. We were looking to change our fortunes and form a gap between us and the two relegation spots. Could we do it?

We started off with an expected defeat to Preston in the JPT. This leaves us in just one cup competition, the FA Cup. I won't expect too much from that competition, however. We then won three games on the bounce! Michael Wilde quick-started our season with a memorable brace against Accrington. He then scored, alongside Anoruo (2) and Ray Putterill in a thrilling 4-3 comeback win against Luton. Obi then scored another brace, including a last minute winner, against a shocked York side, where 17 yr old Harry Byrne even managed to get his name on the score sheet! A goalless draw against Oxford was then followed by a 3-0 defeat of Burton, where two 17 yr olds, Lloyd Carlisle and Harry Byrne, scored all three goals. We then suffered a defeat in an exciting 4-3 loss to Bury before drawing 1-1 away to Dag & Red.

I am very pleased with this set of results. It is more than I had hoped for and it could not have happened without the two youngsters, Lloyd Carlisle and Harry Byrne. They proved that hunger and desire beats ability. 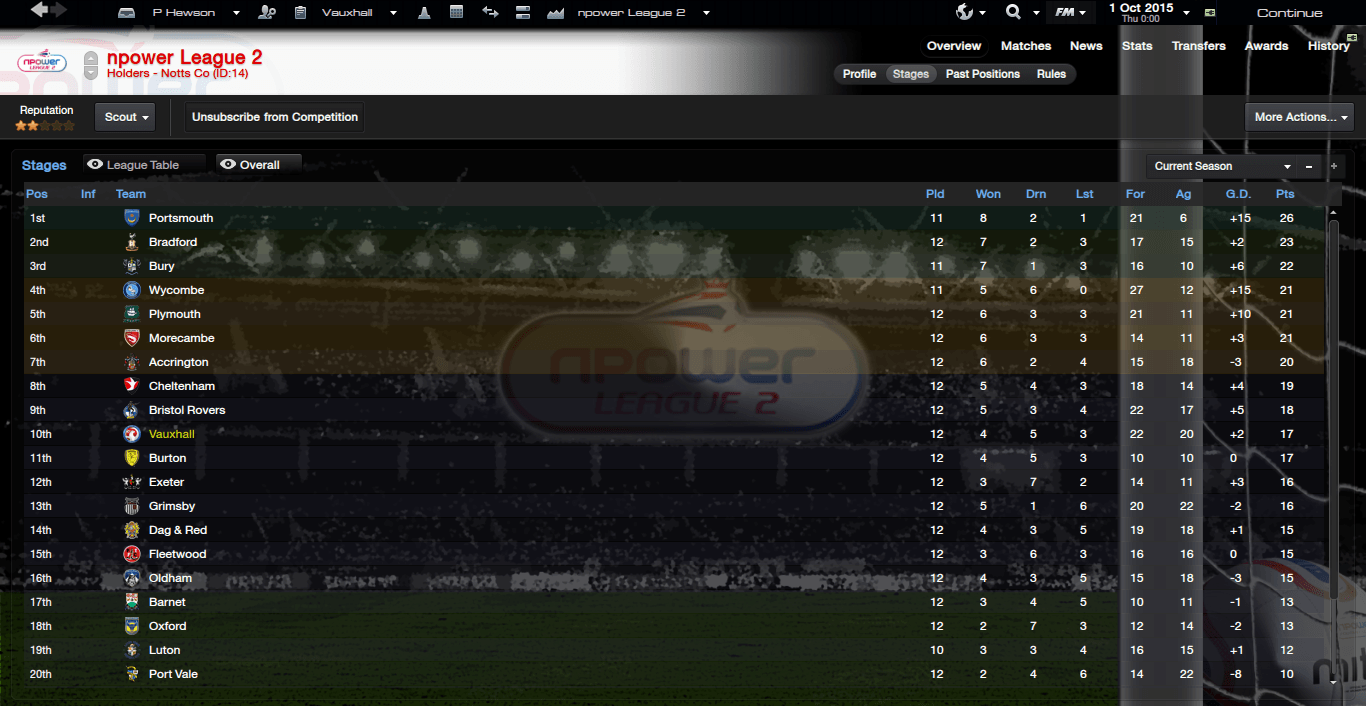 We have climbed up to a very respectable 10th place, and we are just three points off of a play-off place. It is still very early days, and our end of season form in the past does not reflect kindly on us, but maybe we might just have a slim chance of promotion. For now, we will be content with staying away from the relegation spots, however.

We play our fellow promoted club, Plymouth, at home to kick off the month. We have some very nice looking fixtures this month. Wycombe will certainly be the biggest challenge for us next month. Hopefully we can show our values in what will be a very exciting month.
Login to Quote

Arvind
9 years
Excellent month Justice! Looks like your youth are pulling you through and that is always good to see

Don't know how Mr. Carlisle is scoring goals with 3 finishing though

Jer
9 years
I agree with Arvind in everything. Portsmouth in the Npower League 2

Don't know how Mr. Carlisle is scoring goals with 3 finishing though

Lloyd Carlisle has that eye for goal which seems to come naturally for some players. As for Harry Byrne, I suppose he's half decent too

To be honest, I'm very surprised that they are not in the BSP or lower