Rablador
9 years
I'm just amazed by how good Euan Smith is on this game. He is god awful in real life

k1rups
9 years
A very tough start to life in the Championship. Hopefully you can turn things around and avoid the perils of relegation! Great update though

Justice
9 years
Thanks guys, I knew this season would be a challenging one!


Hey guys, here is that mega update I promised you. I left you with us struggling to come to terms with life in the Championship. Could we scrape enough points to keep us floating above danger? 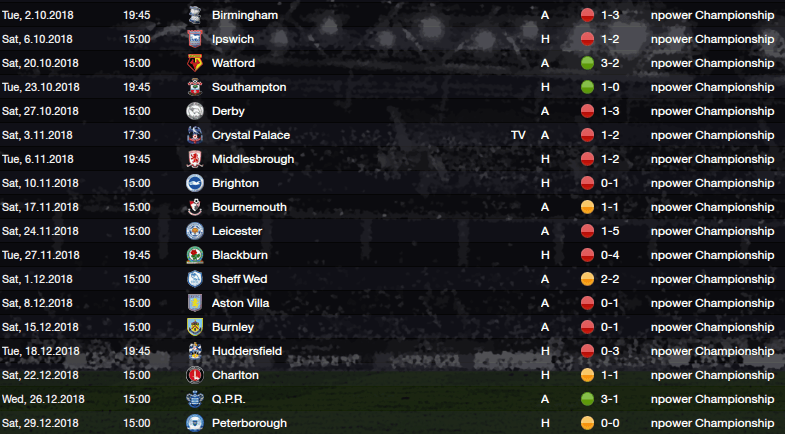 In these three months, we played no less than 18 games. Of these 18 games, we won just 3, drew 4 and lost 11 games. We have struggled a lot in this league and we have suffered some very heavy defeats. Hopefully we can improve on this, however. On a high note, we are undefeated in our last three games, with one win and two draws and we go in to 2019 with the determination to dig ourselves out of this hole. 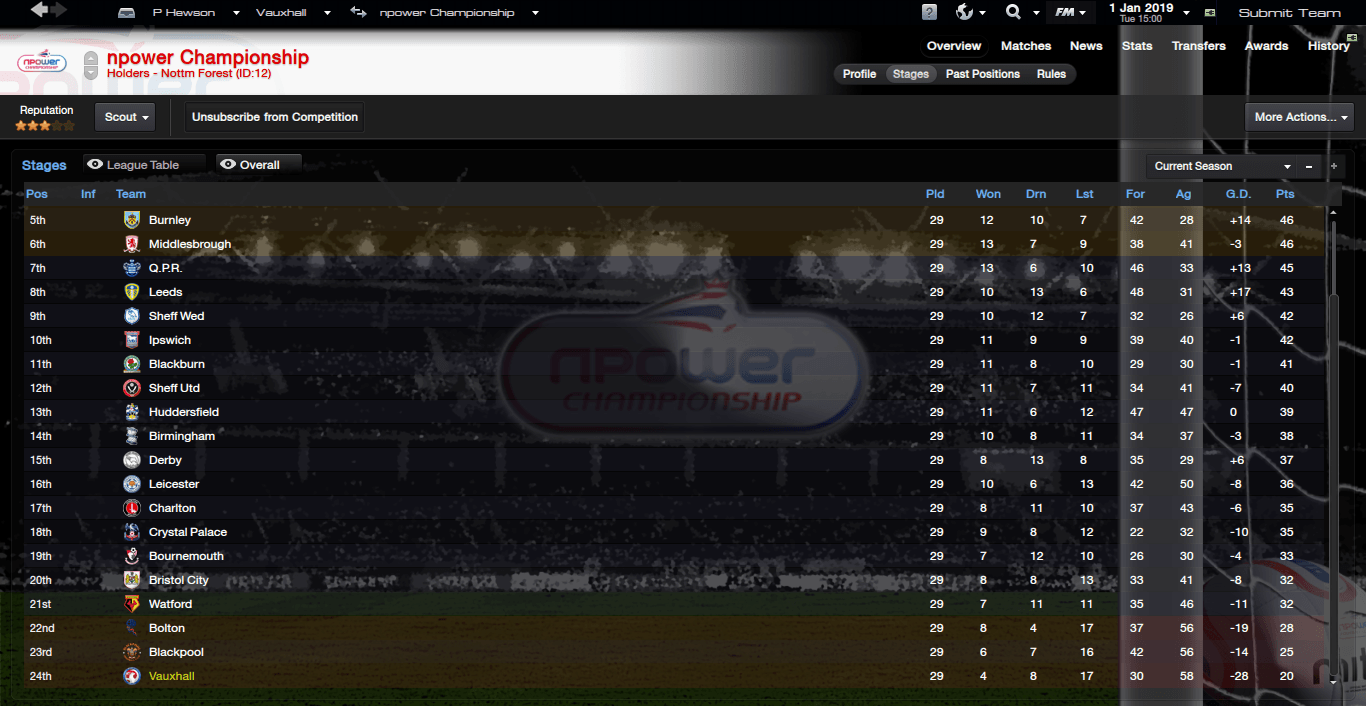 As expected, we are rooted to the very bottom of the league. With twenty-nine games played, we were well over halfway and we need to change our fortunes. Our goalscoring has been poor, as has our defending. We need to improve in each area and maybe a tactical shift is needed to do this. The safety zone is 12 points away from us, and that is what we are aiming to breach. The sooner we can do this, the better. 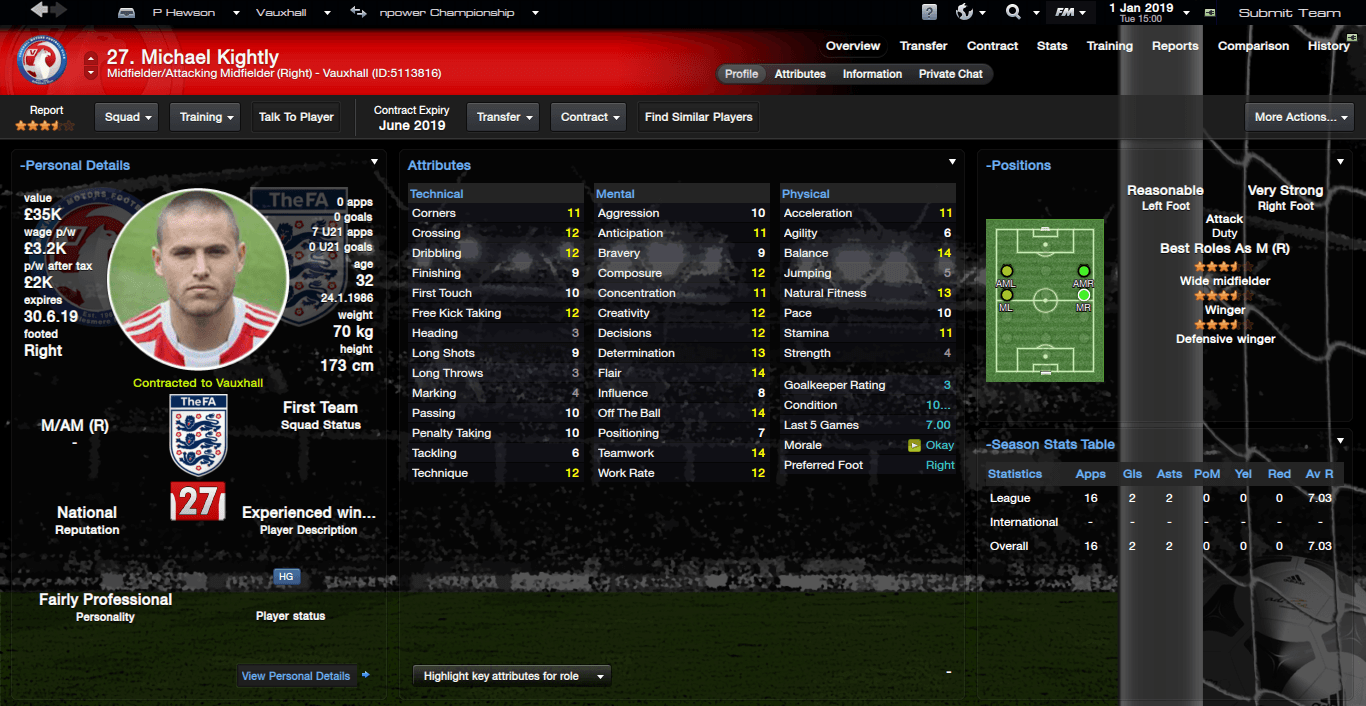 Michael Kightly is a Premier League veteran, who applies his trade on the wing. He has experience at clubs such as Stoke City and Wolves. He is a good crosser of the ball and is good with the ball at his feet. He is also very creative and he adds a different dimension to our team.

We have seven tricky fixtures over the next two months. Hopefully we can pick up some points and climb the table to survive.
Login to Quote 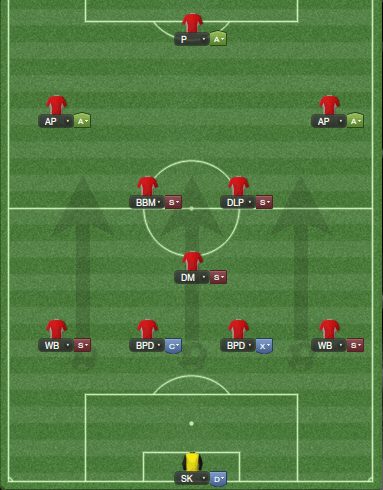 The players and staff were all sitting around inside the tactics and video analysis room in the training facilities in Ellesmere Port. There was a nervousness etched on the faces of those around the room. The poor season has exhausted the players mentally. Any confidence they had at the start of the season was gone. Nobody dared to talk. They were all waiting for the gaffer to enter the room and to begin the meeting.

In he walked with a look of determination on his face. Every eye was focused on him. He briskly walked over to the chalk-board and begin to draw out a formation with tactical arrows pointing in many different directions. After five minutes of tinkering, the drawing was complete. He stood away from the board and admired his work.

Bono: "Lads, this is our new formation for the rest of the season. We are going to be playing a 4-5-1. But this is just a formation, our tactic is a lot more complex. What I dream of us playing is a style of football synonymous with the football played by the likes of Bayern Munich, Dortmund, and even Real Madrid. I want us to play an attractive, controlling style of Total Football.

We are going to play as one, smooth unit. Pressing high, playing quickly, not wasting any time. We will keep the ball moving at all times and look to pass the ball around the defenders. If we can move the ball well, gaps will appear which we can penetrate. Defensively, we stay solid. Always have players covering, and our keeper ready to close down opposing strikers if needs be.

Guys, I'm not expecting instant results with this tactic, but if we keep pushing, we can make the results happen. Stay committed and stay aware and we can survive in this league. If we want to keep moving forward as a football club, we must stay strong and have faith. I will always be proud of you guys, now we must make the fans proud."
Login to Quote

Jack
9 years
Hopefully this will lift you out of the relegation spots, good luck
Login to Quote

Nice tactic, though, hope you can dig yourself out of this rut!
Login to Quote

Toon
9 years
Are you aiming for lots of draws or a few wins?
Login to Quote


I'm just aiming to get points on the board. Obviously I want to win games, but I'd rather secure a point than risk it for a win now.
Login to Quote

Rablador
9 years
Survival is the only option!
Login to Quote