I want to thank everyone for reading and commenting, without you Kammy couldn't have Made an Unbelievable Return/Gone from friend to Fayed/Become the Saviour of the Saints.

THANKS FOR READING!
Login to Quote 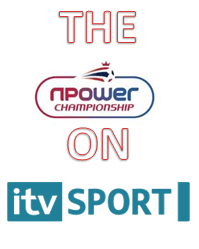 The Build Up: Geoff Shreeves


Geoff Shreeves: Hello and welcome to the npower Championship Play-offs. We are at the Semi Final stage and today's game is between Wolves and Southampton, who of course won the first game 3-0, but can Wolves come back? Lets see if we can find anyone to interview... oh, there is Wayne Hennessey.

GS: Hello Wayne, how do you feel, after the 3-0 defeat in the first leg?
Wayne Hennessey: Well, I'm happy that we made it into the play offs which was very trciky, but unfortunately it looks like we are out. I hope we can pull together and maybe take this to extra time, but it is a big ask.
GS: Wayne, the loss was not at all your fault, you played well and made some great saves, but does it matter that you played well or is it more important that you win?
WH: It's always a bonus to play well, but if we don't win then I'm afraid it counts for nothing, and my performance does not count for any thing unfortunately.
GS: Thank you Wayne.

GS: Lets see, can we find someone else? Oh yes, there he is, Kammy himself. 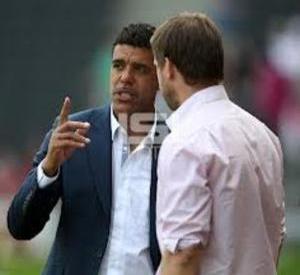 GS: Hello, Chris, how are you feeling after the superb win in the first leg?
Chris Kamara: Hello, er, I'm feeling great to be honest, I think we can win again today.
GS: You know that the winners of this will face Tranmere in the final, do you think you can beat them?
CK: Absolutely, we drew before, but we have improved as a team now and I am confident we can win, but I honestly believe that their fans deserve the Premier League, they've been stuck in the lower leagues for so long and now is their chance.


Sam Matterface: Hello, this is Sam Matterface here at Molineux for the npower Championship play off Semi Final, to be contested by Southampton and Wolves. I’m alongside Jim Proudfoot.
Jim Proudfoot: Thank you Sam, I’m Jim and I can’t wait to get stuck into the action here. Lets take a sneak peek at the line ups.
Wolves: Hennessey, Stearman, Berra, Batth, Ward, Forde, Henry, Davis, Parvulescu, Griffiths

Southampton: Gazzaniga, Cummings, Yoshida, Shotton, Shaw, Spearing, Johnson, Kasami, Mackie, Lallana, Lambert
JP: Kamara has certainly taken a liberty with his line up, not picking Jay Rodrgiuez despite him getting 2 goals in the first leg. Henning Berg has also been brave, changing much of his Wolves side.
SM: Are you ready Jim? I certainly am, and the teams are coming out of the tunnel! Find out what happens, next, on ITV Sport.


0’ JP: Wolves kick off, and we are underway at Molineux.

11’ SM: Corner to Southampton, Lallana to take it... SHOTTON! So close! He should have scored, from there he had no excuse, Ryan Shotton should have put Southampton into the lead.

38’ SM: Backpass, Gazzaniga boots the ball forward. Headed by Berra, it’s gone to Karl Henry.
JP: Henry, turns ooh, what a run, Leigh Griffiths! LEIGH GRIFFITHS HAS GIVEN WOLVES SOME HOPE! Lovely, superb finish, great ball by Henry too, and Wolves are not out of this!

45’ SM: Shotton, with the clearance, but only as far as Stearman, good ball by Stearman and KEVIN DOYLE! HE HAD TO SCORE! GREAT SAVE BUT OOOOOOOOH-IT’S DANNY BATTH! DANNY BATTH! This is really interesting now, 3-2 on aggregate!
JP: Chance for Doyle, he wasn’t picked up by Yoshida, and he really should have scored, but Danny Batth was on hand, and he picked up the rebound.
SM: Southampton in no rush to get the ball back to the centre spot, oh, and it is half time. 2-0 to Wolves, who expected this?

53’ SM: Lallana’s corner, these have been effective so far, to Shotton, and he’s done it again, Shotton? Deflected and it falls to YOSHIDAAAAAAAAAAAAAAAAAAAAAAA! GOAAAAL! He picks up on the loose ball, and just smacks it home, from 6 yards out.
JP: Southampton are headed to Wembley!

58’ JP: Cummings to take the free kick from 45 yards. Plays it short, Yoshida, to Kasami, Mackie, he’s played Bradley Johnson in and it is Johnson! Squares it to LAMBERT! 2-2! AN OPEN GOAL, NO CHANCE FOR HENNESSEY, AND IT IS 5-2 ON AGGREGATE!
SM: Great work by Mackie, fantastic pass, Johnson played it to Lambert, on a plate, he couldn’t miss!

90’SM: Hennessey, short pass to Berra, Batth, long ball forward but THERE YOU HAVE IT! SOUTHAMPTON WIL L BE THE TEAM TO FACE TRANMERE IN THE FINAL! This is Sam Matterface, he is Jim Proudfoot, from the both of us, goodnight!

http://www.saintsfc.co.uk/cms_images/player/maya-yoshida-norwich-away148-734798_478x359.jpg
Yoshida made it to the ball first, and scored

Jer
7 years
Great update! Tranmere should be a breeze with the type of players that you have at Southampton! Great update!
Login to Quote

BFC_Michael
7 years
Come on your Saints!!! Tranmere will be a breeze in the final (how the hell did they get to the championship play-off final anyway?!?!)
Login to Quote

PaukerJ:Great update! Tranmere should be a breeze with the type of players that you have at Southampton! Great update!

Thanks, but actually Tranmere are a good side and they deservedly made it into the playoffs. And my players aren't that good, I have to play RYAN SHOTTON AT CENTRE BACK WEEK IN WEEK OUT!

BFC_Michael:Come on your Saints!!! Tranmere will be a breeze in the final (how the hell did they get to the championship play-off final anyway?!?!)

They are actually a very good side, don't underestimate them, but I will win anyway

Good luck, although I know you won't need it

brownymcfc
7 years
One of my favourite stories on here, partly to do with the fact that Kammy is a legend. Good luck for the playoff final!
1
Login to Quote

Good luck, although I know you won't need it

I think I will need it

Thanks, it is always good to know someone else is following this and especially good to know it is one of your favourite stories! I hope you keep reading!
Login to Quote

It'll be harder than you think, but I'm still confident I can do it

"Hello, this is Le Tissier's view, written monthly by me, Matt Le Tissier, for you to know exactly what is going on at St.Mary's, but this month we will not be finding out what's going on at our stadium, it is about Wembley, the national staduim, because we will be there, for the play-off final against Tranmere. I personally have no worries, Chris Kamara knows what he is doing and our players know what they are doing, and although Tranmere are a good side, and they wouldn't be here if they were a bad side, they managed to beat Stoke, albeit with a 94th minute goal, so they also know what they are doing. I've got my ticket, and I will be there at Wembley alongside the fans, because that is what I am now, a fan. And, with our current form and the strength of our side, I know it's bloody brilliant being a fan."
Login to Quote

k1rups
7 years
Nicely done! Maybe this can become a permanent fixture when you get promoted