The FM Rookie
9 years
Good pre-season, are you aiming for a promotion this time?
Login to Quote

Blue
9 years
Good pre-season, looks like you made a bit of money too
Login to Quote


Yes I am aiming for promotion this season, will be very special if it happens as the club is 50 this season

The FM Rookie
9 years
You might receive another letter so

tango602
9 years
Time for the April and May update.

We have had a very good start in April and May with 5 wins and 2 draws from the 7 matches we have played, this means we are 2nd in First Division Sodra and 2 points behind league leaders Skovde who were playing in Superettan again last season.

In April we had to play Husqvarna FF and Varbergs BoIS, Husqvarna was a home game and we got a 2-2 draw from this match, we were behind twice but pulled back each time to get the draw, the Varbergs BoIS game was an away fixture and the first time we have played them while I have been in charge at Torns.

We came away from the Varbergs BoIS game with a 1-0 win which was very pleasing as this left us in the top 5 in the league.

May brought 5 ganes for us to play, we won 4 of these matches and drew 1, the draw came in the first game of the month which was a home game against Lindome, this finished 1-1 which was a little disappointing at the time. After this we had the 4 wins against Myresjo, Kristianstad, Norrby and Lunds BK.

The Myresjo game was very pleasing as they are a professional side and we beat them 3-0, the Lunds BK game was too close for comfort as we only won it with an 85th minute goal scored by substitute Tomas Martinsson.

If we can keep this form up then we should be defying the odds and playing in Superettan next season.

I leave you with some pictures. 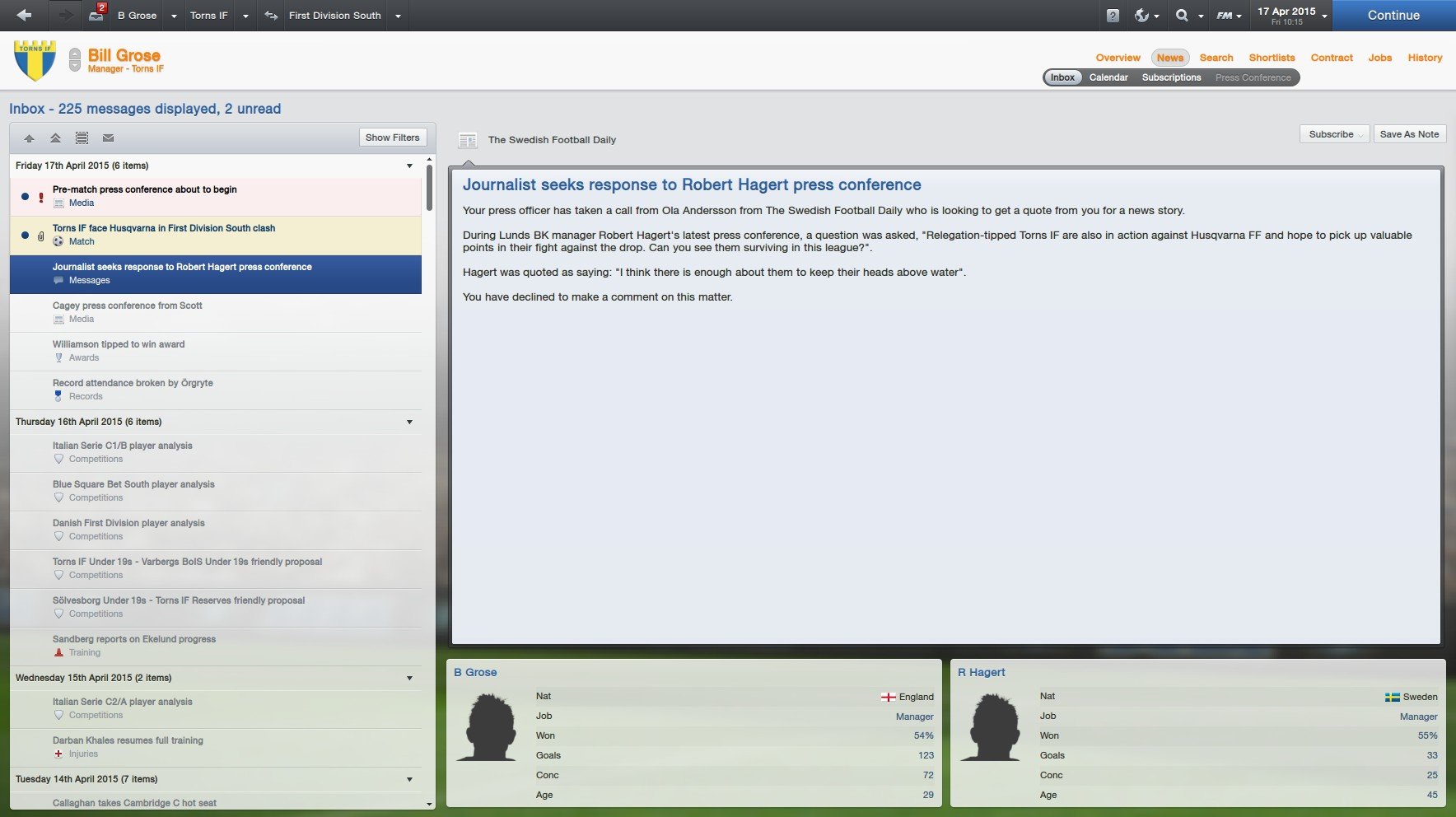 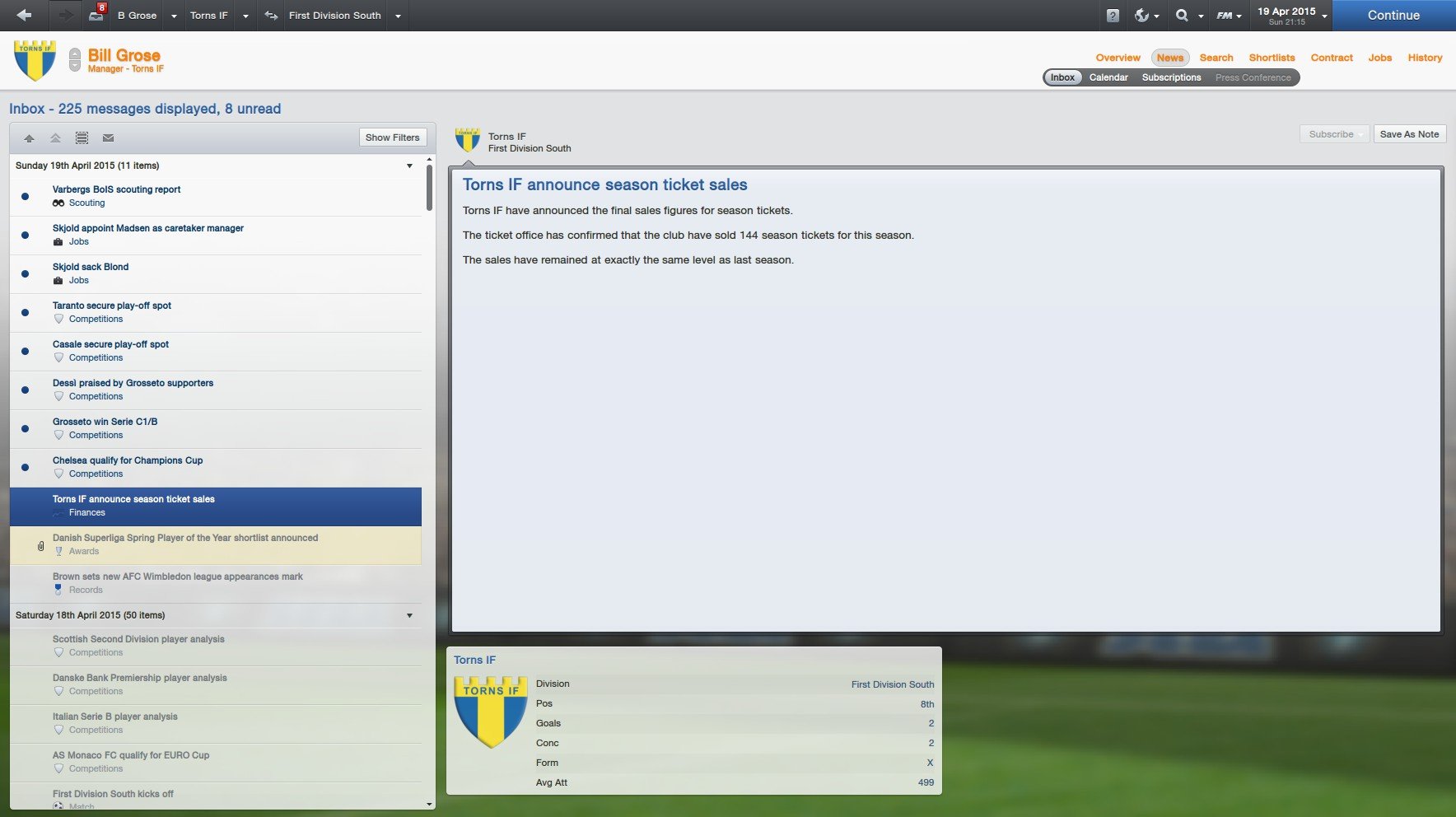 Results so far this season 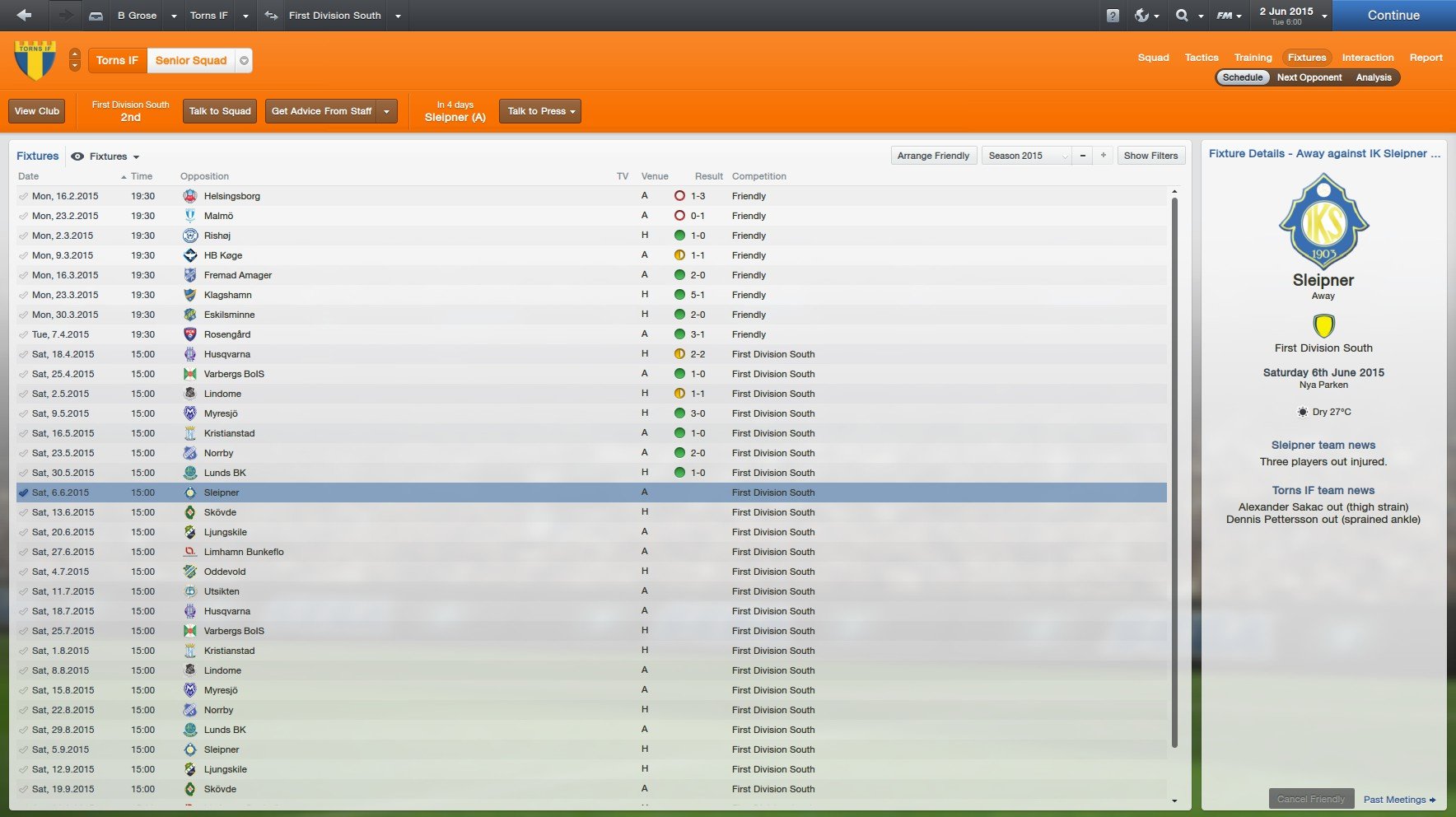 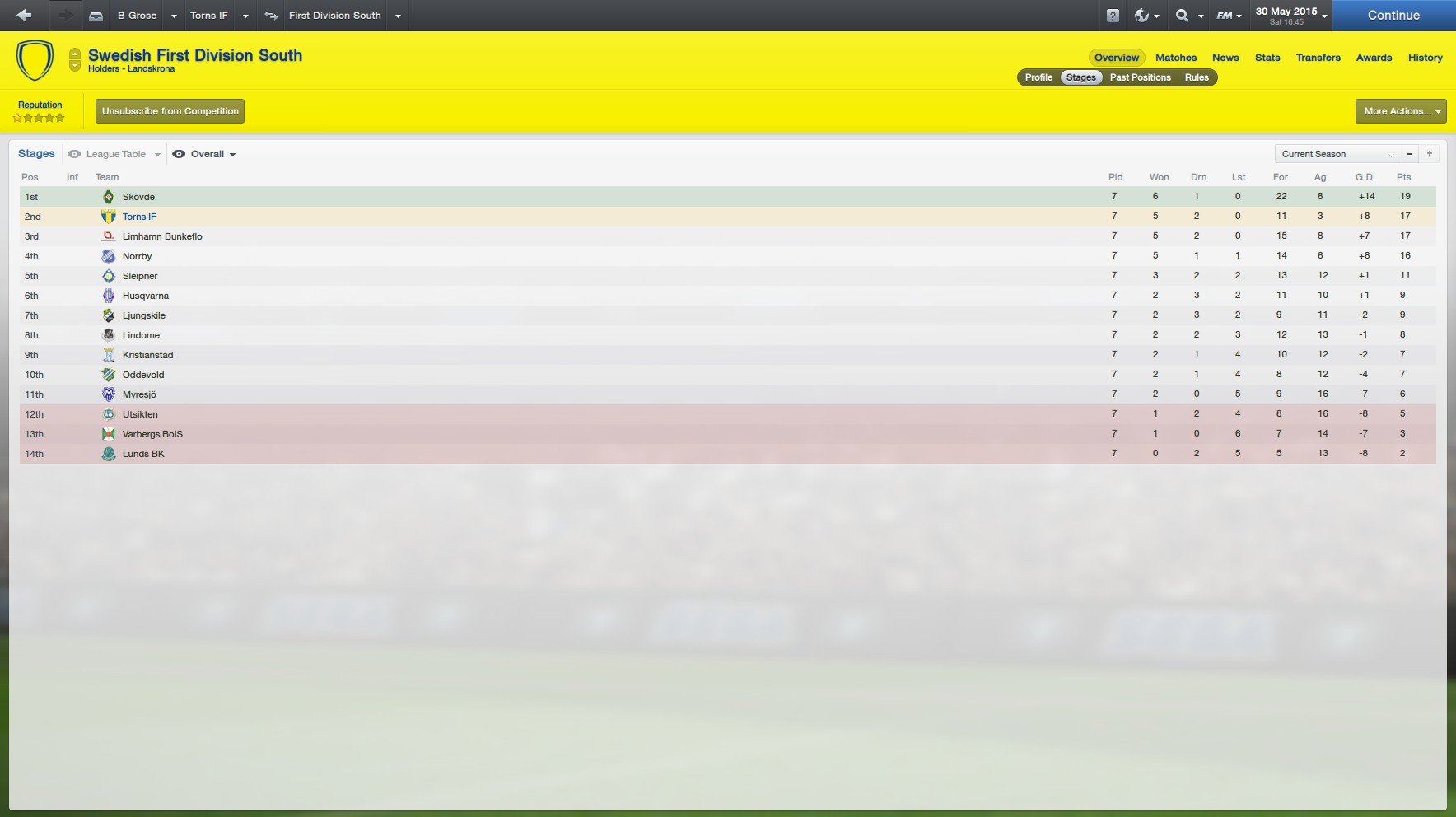 The FM Rookie
9 years
This is your season man! Go make us proud!

tango602
9 years
Thank you or and Rookie

or, Torns will play Wood again some time soon, I look forward to it

Rookie, I fully intend to make everyone proud!
Login to Quote

The FM Rookie
9 years
Don't get me wrong, we're proud of you already! This is a smashing story

In that case I intend to make you all even prouder

The FM Rookie
9 years
Is that even possible?

jason_connolly1987
9 years
Cracking story pal, never read a Swedish league one before... Keep it up

a_esbech
9 years
Ahh Skövde Södraettan's best team. However Torns has the best manager. Who will prevail?

(Btw. Lund is a lovely city)
1
Login to Quote

tango602
9 years
Time now to look at how June, July and August went for us.

The first game we had to play in June was an away game against Sleipner, we won this game 1-0 which was closer than I would have liked but it was a win nonetheless, the toughest match of the month followed this which was a home game against league leadera Skovde who are very tough opponents, unfortunately we narrowly lost this game 1-0 which meant we were a win behind them again.

The Skovde loss was followed by a 1-0 loss away to Ljungskile but after that result we got a pleasing 3-1 win at home to Limhamn Bunkeflo meaning we were still in 2nd after June.

Our first game of July was a home fixture against Oddevold which we comfortably won 3-0, this was followed by a 2-0 away win against Utsiken and an unfortunate 2-0 loss when we were away to Husqvarna FF. We were still 2nd in the league at this point and a win behind league leaders Skovde.

Due to the First Round of the Svenska Cupen we had two league games brought forward, these being home games with Varbergs BoIS and Kristianstad to finish off July, we won both of these fixtures 2-1 but were still 2nd in the league.

Our first match in August was our Svenska Cupen First Round match away to Nike who are now in the 5th tier. We had not played them since 2012 but I was pretty confident of victory. However this did not happen as Nike scored in the 90th minute to win 1-0 and send us out of the cup. I was absolutely fuming after this and the team knew it.

After this match however, one of my star MC's Ville Kolehmainen was called up to play for Finland Under 19's in a friendly with Scotland Under 19's, I was incredibly pleased with this and attended the game. Kolehmainen played 40 minutes of the match and got the assist on Finland U19's first goal which made it 2-1. The game finished 2-2.

Our next game was away to professional side Myresjo in the league, we won this match 3-1 to go top of the league, however Skovde had a game in hand but they lost this match meaning we were still top by 2 points.

We played Norrby at home after this match and we won 2-0 to go 5 points clear of Skovde who lost 3-1 at home to Kristianstad, I was very pleased with this. Our last game in August was a trip away to Lunds BK which resulted in a slightly disappointing 0-0 draw, however we were still top of the league.

I leave you with a selection of pictures. 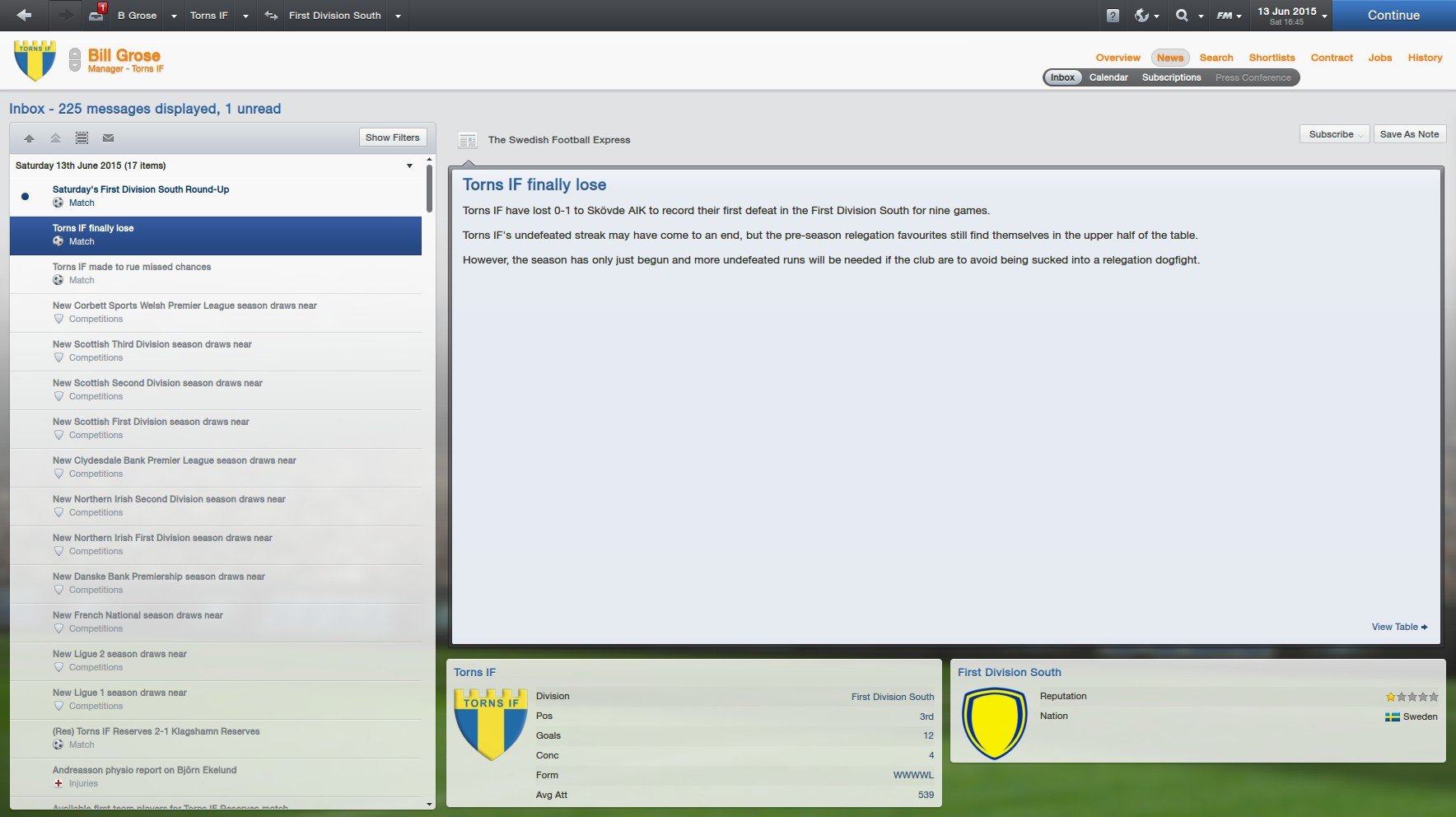 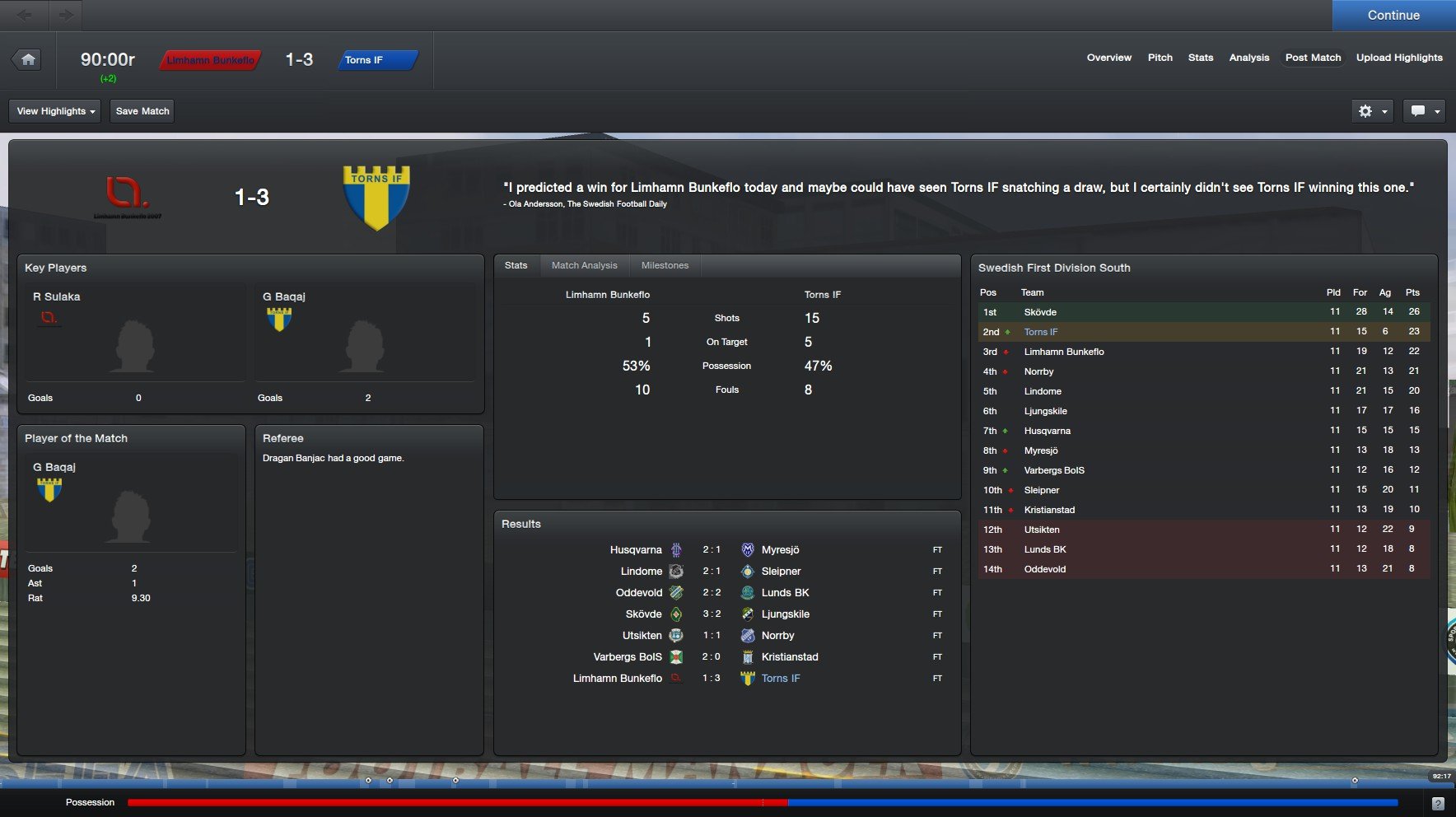 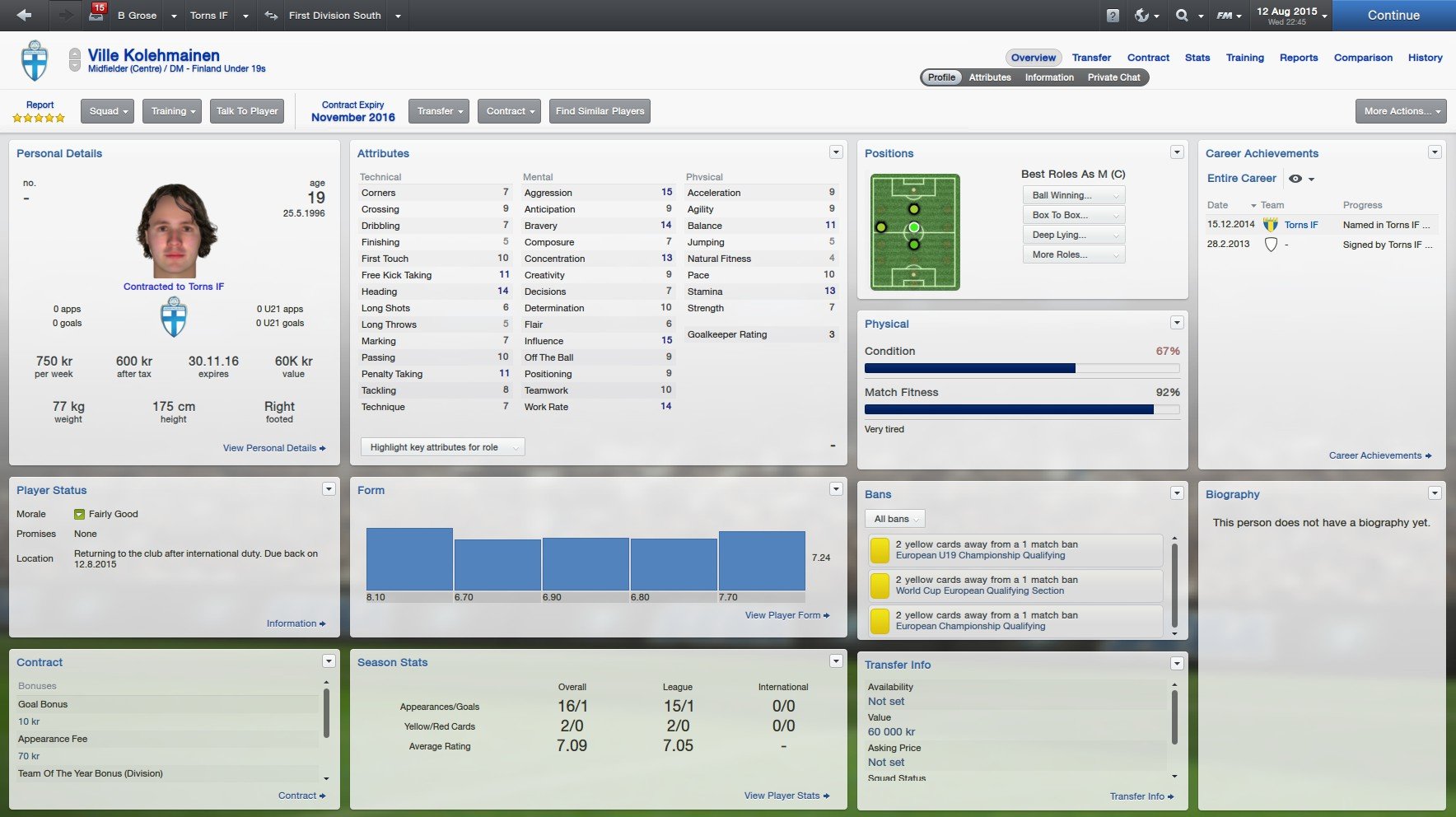 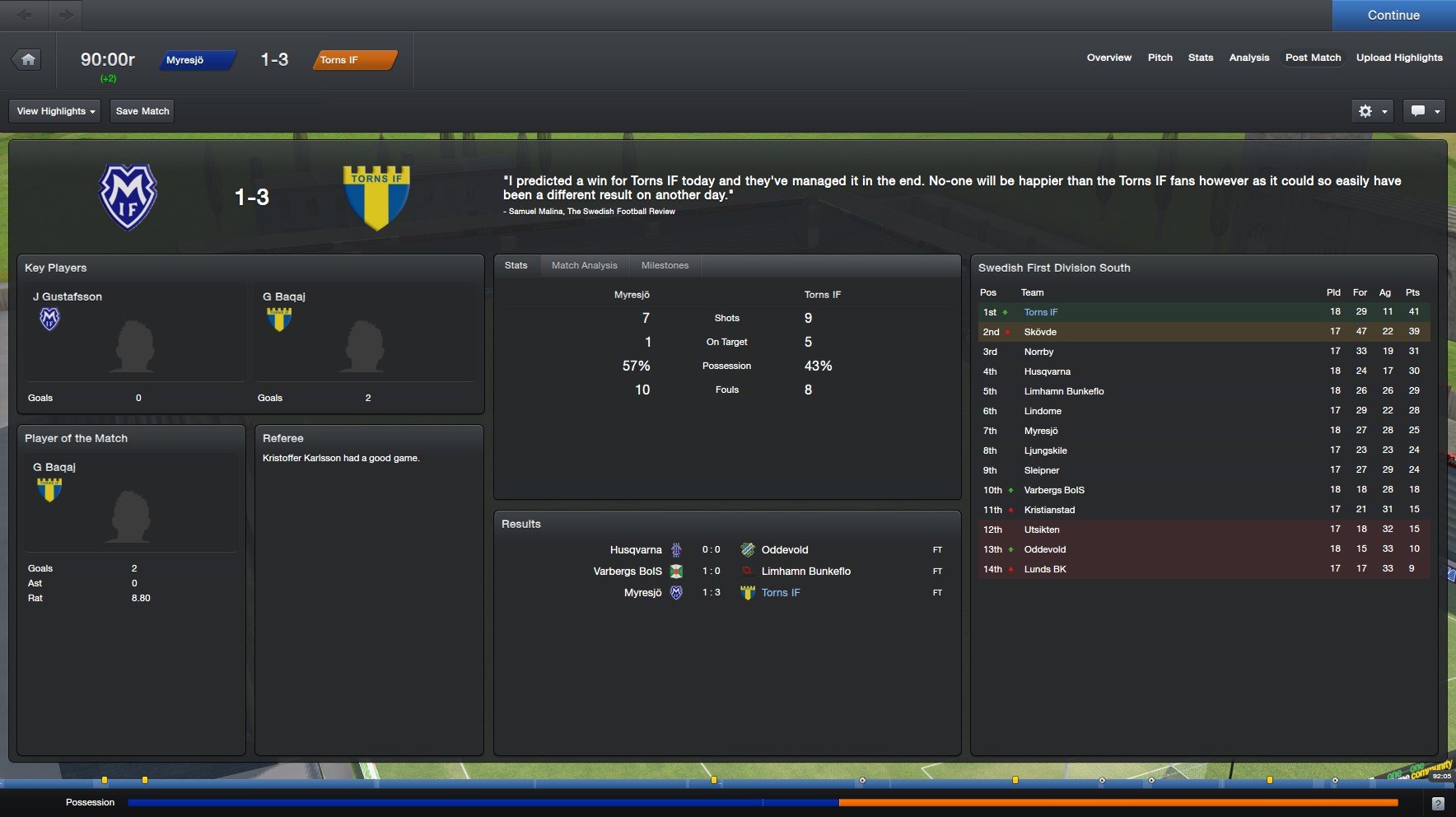 Media Report on the Myresjo win 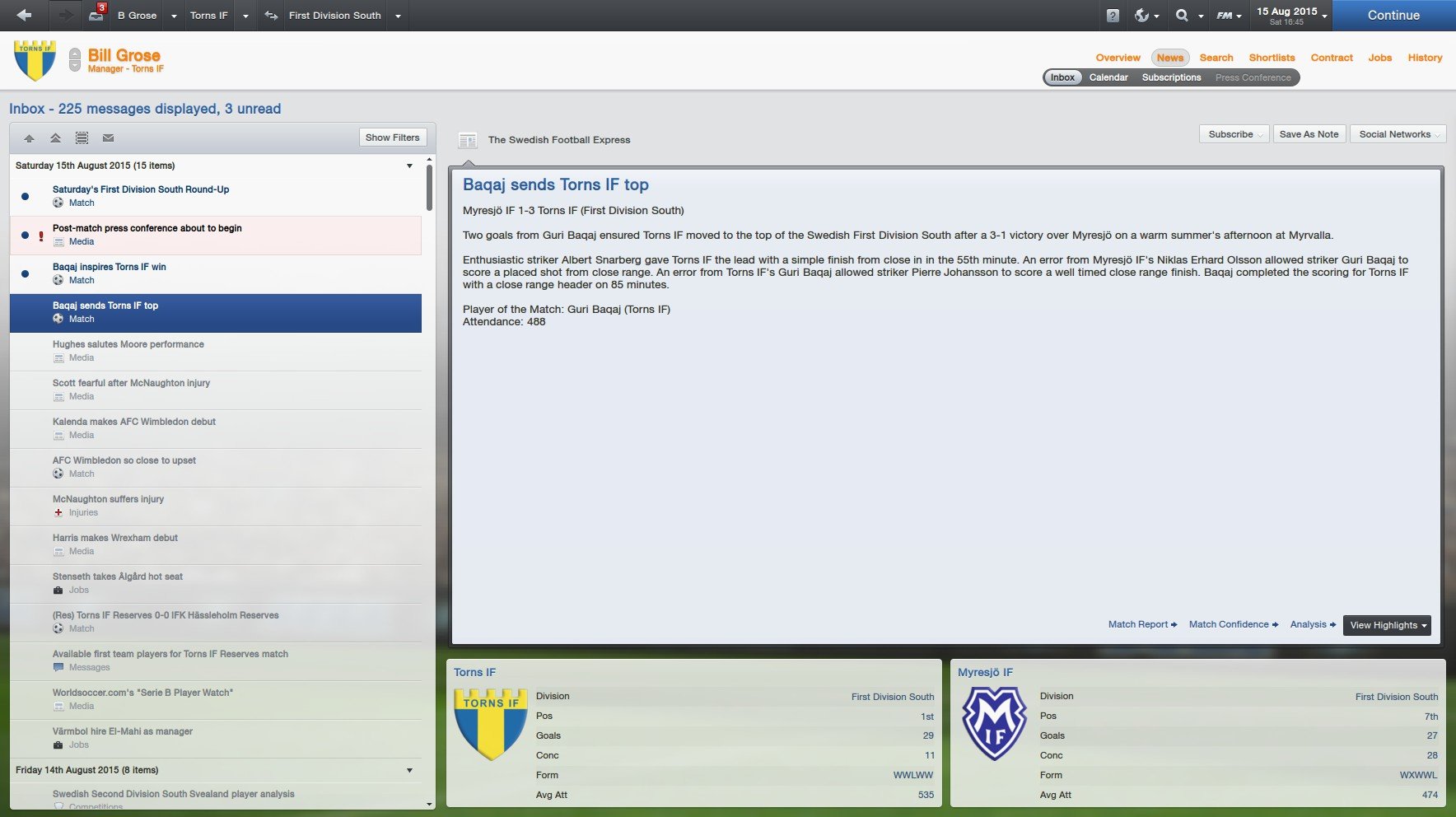 League Table after the Myresjo game 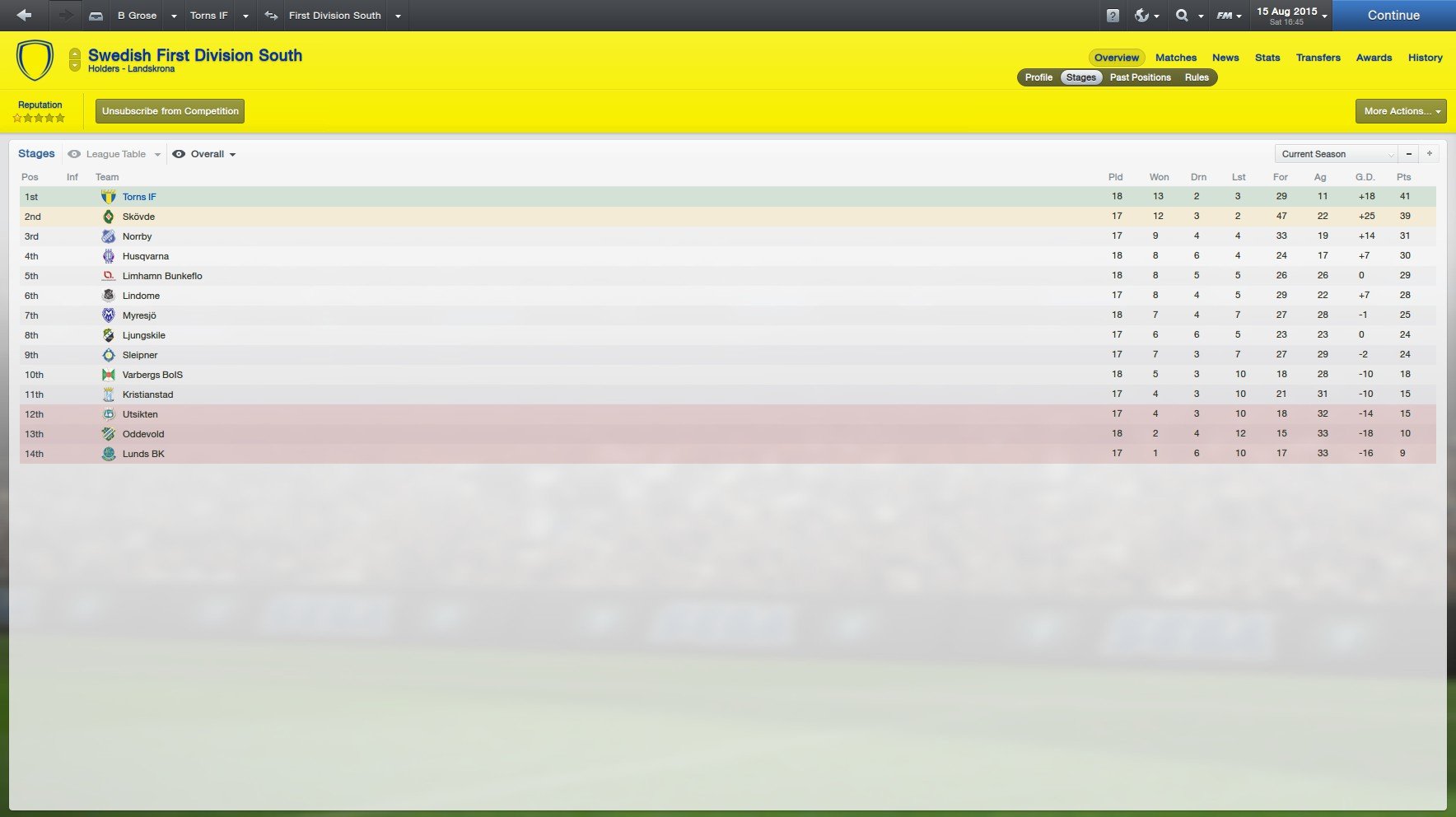