kernel: Hopefully he keeps scoring like this when the real season starts up!
Login to Quote 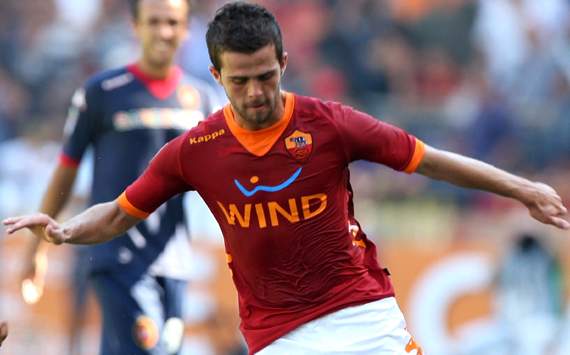 Down 2-1 with just minutes to, AS Roma threw wave after wave of attack against the stalwart Udinese defense. The Coppa Italia final was on the line, and it seemed that the Zebrette would walk away with the trophy having scored on their only two shots on target all game. It wasn’t to be, however, as an injury time equalizer from Adem Ljajic and an extra time stunner from Daniele De Rossi sent the trophy to Rome, and Totti won his first season double.

Now, a few months later, Roma and Udinese will go head to head again in Italian football’s annual curtain raiser in the Supercoppa Italiana, pitting the winner of the Serie A (Roma) to the winner (or in this case runner-up) of the Coppa Italia (Udinese).

The game started slowly as Udinese’s strangling defense did its work against their opponent’s new-look midfield with Turkish star Nuri Sahin getting his first competitive start for the club. It was veteran holding player Daniele De Rossi that was key in the breaking the deadlock, however, when he threaded Corchia down the right. The fullback’s cross was wonderfully met by the head of Miralem Pjanic and nestled into the far corner, giving Totti’s men an early lead.

Just after half time, Corchia was at the heart of things again as he flicked on Ljajic’s cross from the left to Pjanic. The midfielder, brimming with confidence, took a deft touch around the goalkeeper and slotted into the empty net, doubling his tally and giving AS Roma a commanding 2-0 lead with forty minutes to go.

Udinese refused to give up, however. Argentinian midfielder Roberto Pereyra pounced on Paolo Cannavaro’s poor header back toward Begovic. The 23 year old made no mistake in rounding the onrushing keeper and dribbling into the empty net. Though the Giallorossi had once dominated, suddenly Guidolin’s men were back into the mix with a shout.

Totti, who eventually subbed into the game to replace Alvaro Morata, had to motivate his team to solidify the backline and keep away the late Udinese pressure as they sought an equalizer. Cristian Pasquato saw his long range effort sizzle off of the post and wide, and Luis Muriel put an excellent chance well over the crossbar. Totti nearly scored himself, but was fouled, and managed to sprain his wrist and will miss two weeks of action.

Roma held on, in the end, and took home the Supercoppa Italiana trophy to kick off the season with some silverware. “It was a tight game,” said Roma’s boss after the game, bearing a wrist-brace. “Udinese played well, but we played better, and we are happy to start the season the right way.”

Nice win, never understood why that's held in Beijing though

Jer
8 years
It's a pain in the ass to fly all those miles to get to the Eagle's Nest Stadium .-... How can you play and manage at the same time ;), and who decides to sub you off?
Login to Quote

Pauker: If I play, Aurelio Andreazzoli does the 'managing', if that makes sense, but I also kind of 'manage' from the pitch. As for the substitutions, we come to an agreement on it...somehow

Deleted
8 years
This is awesome, keep it up. Got the potential to be the best story on the site. Well done.
Login to Quote

AaronHJFT96: Thanks mate, always helps to start off the season with a trophy!

ROMA OPEN SERIE A IN STYLE After all the waiting, all the transfers, and all the preseason, it was finally time to get Serie A underway once more. Last season’s surprise champions, AS Roma, were set to raise the curtain on the year by hosting Empoli at the Stadio Olimpico.

The Giallorossi had a number of new names in the starting eleven for the match. Sebastian Corchia, Asmir Begovic, Clement Grenier, and Nuri Sahin all made their full league debuts for their new club, while McDonald Mariga appeared from the bench. A new-look side from Totti, perhaps, but the class and winning mentality were still there from last season.

The first half passed with little incident as Empoli’s entrenched defense did very well to hold back Roma’s attacking trio of Pjanic, Ljajic, and Destro. The imperial passing skills of Sahin and Grenier in the center of the park allowed their side to dominate possession, but Empoli packed central midfield with four bodies, and there was little space to make chances in.

Two minutes into the second half, however, Empoli was undone. Asmir Begovic had launched the ball long toward his strikers, and Mattia Destro nodded the ball down expertly to Miralem Pjanic. The playmaking Bosnian slipped in Adem Ljajic with one touch who hammered the ball just under the crossbar to give Roma a well-earned 1-0 lead.

Almost an hour in, things went from bad to worse for the newly promoted side. Clement Grenier had turned brilliantly around Empoli’s captain Davide Moro, but the 32 year old veteran let a rush of blood control him and lunged in two footed. The referee did not hesitate in sending the skipper to an early bath for his vicious foul.

Just three minutes later, new man Sebastian Corchia thundered down the right flank, beating two men with elaborate stepovers. The French fullback didn’t even need to look up as he swerved in an early cross, and looked up to see Mattia Destro slide in front of his marker and poke the ball inside the near post to double the Giallorossi’s advantage and make the game safe.

By the end of the match, Roma had enjoyed 69% of the possession and mustered an outstanding 21 shots to Empoli’s 3, a pure footballing masterclass. Both of Totti’s starting strikers had found the goal, as well, an encouraging way to start the year.

“That was a good way to kick off the season,” said ‘Il Gladiatore’ after the match. “I think we have the quality to challenge for the league title again this year, but we need to take things one match at a time. Next up is AC Milan at the San Siro, so we must be prepared.” Jer
8 years
Changing your layout.. be careful, there's a member by the name of AaronHJFT96 that goes on, copying layouts.. js. SRSLY, 2-0 AGAINST EMPOLI!?
Login to Quote

Neal
8 years
Pauker: A win is a win, especially when we dominated the game