Paris Saint-Germain has confirmed that Diego Maradona will leave his post as manager once his contract expires in June.

Maradona is leaving the French champions after contract talks between both parties broke down, with the 53-year-old believed to be asking for a higher wage.

Despite all the triumphs, rumours in France suggest the PSG board offered Maradona a new deal but with a significantly lower wage, an offer he would then go on to refuse.

PSG’s fans have reacted angrily to news of the charismatic manager’s departure, with the general consensus being that the Ligue 1 champions’ owner, Nasser Al-Khelaifi, has been ill-advised over the contract negotiations with Maradona.

Maradona will now be free to talk to other clubs if he wishes to, with the likes of Manchester United and his former club Napoli all thought to be keen on appointing him.
Login to Quote

Nick
8 years
Dun dun dun... I wonder where he will end up

Former Paris Saint-Germain manager Diego Maradona insists contract talks were not the only factor behind him departing the Ligue 1 champions.

The Argentinian manager was rumoured to have left earlier this week due to a difference in opinion with the PSG board regarding his wages on a new deal.

However, Maradona, who had just one month left on his current deal in Paris, revealed that his offered wages was not the only factor behind him quitting.

“I will be upfront and say that as a job, I feel I need to be paid adequately so of course the offer I received played some part in my departure.

“After winning what I had won, I would have at least expected to be offered the same wages or higher but this wasn’t ultimately what I based my decision on.

“I didn’t feel entirely comfortable with the direction the club was willing to enter following this season as making exuberant signings and spending big just wasn't me.

“That’s the plan at PSG and I don’t think it quite matched my style or benefit Ligue 1 with regards to upping competition and supporting financial equality.

“In the end, I came to the conclusion that after winning what I had, PSG just wasn’t meant for me anymore but I will take away unforgettable memories from Paris and I am delighted to have placed them well on their way to becoming a force.”

Maradona has expressed his desire to bounce straight back into management, although he admits his future is completely unknown at this stage as his name continues to be linked with the Manchester United job.

“The aim is definitely to get straight back into management, although, I am aware that may not always be possible.

“I haven’t been approached in any way by this or that club so I’ll have to remain patient and make sure whatever choice I make is right for both me and the future club.”
Login to Quote

No1VillaFan
8 years
WOW you have left the club! I hope you find something man and an awesome twist to the story
Login to Quote

WHERE TO NEXT FOR MARADONA? 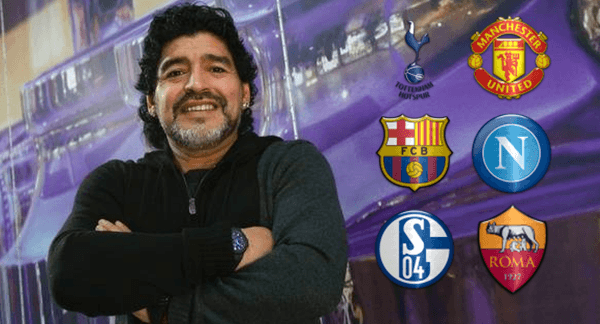 Following Diego Maradona’s surprise departure from UEFA Champions’ League winners Paris Saint-Germain, a whole host of clubs across Europe are believed to be stepping up their interest in the 53-year-old.

And with the former FIFA World Player of the Year expressing his desire to bounce straight back into management, could these following clubs end up becoming his next destination?

Maradona is currently odds on favourites to takeover at Manchester United after both David Moyes and Andre Villas-Boas failed to succeed Sir Alex Ferguson, leaving ‘The Red Devils’ in 4th place, 35 points behind the top 3 in the Barclays Premier League.

The Man United board are thought to be keen on bringing in the strong-minded figure of Maradona as an attraction to potential signings they missed out on last season.

On top of United’s transfer woes, they also risk losing the likes of Robin Van Persie, Shinji Kagawa and Wayne Rooney but they’ll be hoping the arrival of Maradona will again be enough to keep their stars rooted and appease the Stretford End faithful.

Battling it out with United will be their league rivals Tottenham Hotspur, who part ways with Tim Sherwood after he failed to impress during his one year deal.

With Spurs finishing seventh and missing out on Champions’ League football again, Daniel Levy and co. must ensure they appoint someone capable of guiding ‘The Lilywhites’ back into Europe or else risk the investments made under Villas-Boas, with Erik Lamela and Roberto Soldado just two linked with a move away from White Hart Lane.

Also hoping to conclude the arrival of the infamous number 10 is AS Roma under the ownership of American investor James Pallotta.

Roma finished as low as 14th in Serie A this season, a position that had Rudi Garcia facing the chop and leaving the ‘Giallorossi’ fans furious at the lack of progress made.

With big investments made last season to sign Kevin Strootman and Mehdi Benatia, Roma can see all that financial commitment undone unless that appoint an adequate manager.

Another team that has been less than impressive is Maradona’s former side Napoli, who under Rafa Benitez finished 11th in the Serie A.

As expected, Benitez too received his marching orders from the club and Napoli are believed to be trying to lure in their club icon in hope of fighting for the title next season.

On the contrary to other clubs reportedly interested in Maradona, Napoli can count on their star players next season such as Marek Hamsik, Lorenzo Insigne and Gonzalo Higuain, who have all pledged their futures to the club.

From one former club to another, Barcelona could also be eyeing a move for the Argentine after Maradona’s compatriot, Tata Martino, was sacked for finishing 23 points behind La Liga champions Real Madrid in third.

Barcelona finished outside the top two for the first time since 2008, the season Frank Rijkaard stepped down, and hadn’t finished with a total of points as low as 71 since 1995.

Having missed out on the La Liga title, Martino also failed to guide ‘Los Cules’ to Supercopa Espana glory and lost the Champions’ League final to none other than Maradona.

Although Maradona is not believed to be Barcelona’s main option, with Guus Hiddink emerging as favourite, the prospect of the former Barcelona star working with Lionel Messi could be one that swings in his favour when Sandro Rosell makes his choice.

Last but not least, it has been brought to our attention that Schalke 04 is seriously considering Maradona for the job following the sackings of Jens Keller and Lucien Favre.

Keller left the Gelsenkirchen outfit in the relegation zone before being relieved of his duties as former Borussia Monchengladbach boss Favre could only manage to push Schalke up to 13th before the end of the Bundesliga season.

With the likes of Julian Draxler and Joel Matip nearing an exit from the Veltins-Arena, a gamble from Schalke on Maradona may be their last roll of the dice in trying to succeed with their current crop of players before Europe’s elite begin to swoop for their prized assets.
Login to Quote

Aaron
8 years
It'll be Napoli of course! Why would it be anyone else!
Particularly enjoyed that last update as well Paddy my lad. The detail was key;)
Login to Quote Galatasaray finished fourth in the Spor Toto Super League as their bitter rivals Fenerbahce took the title for the first time since 2011, proving sufficient to cost Mancini his job.

After being offered a substandard contract by PSG, Galatasaray has tried to lure Maradona with a big money offer with a healthy transfer budget but the Argentine hero has admitted to rejecting the deal immediately.

“Galatasaray is a team for whom I have huge respect and admiration for but I don’t feel it is the right time in my career to manage in Turkey.

“Maybe years down the line it may be something I’d be interested in but for now, I’m focused on gaining my chance in the bigger leagues.”

Despite understanding why Mancini lost his job, Maradona has offered his support to the Italian meanwhile defining Galatasaray’s league position as bizarre.

“I can’t quite see how Galatasaray under-performed with such a strong squad and a quality manager that was Mancini.

“I had the privilege to watch them a few times in Europe and they always played nice football, which teams often do under the management of Mancini.

“They have top players like Didier Drogba, Selcuk Inan and Wesley Sneijder but clearly something is missing there and that will be a challenge for whoever takes over to discover why they cannot get the results expected.”

Following the rejection of Maradona, Galatasaray are now thought to be diverting their attentions into hiring former Swiss International Murat Yakin or Elzagispor manager Trond Sollied.
Login to Quote

Josh_MU
8 years
Good luck wherever you go!
1
Login to Quote

Northwood
8 years
The only move here is Napoli.
Login to Quote

Barcelona has appointed club legend Diego Maradona as their new manager on a four year deal following the sacking of Tata Martino.

Just days after rejecting an approach from Galatasaray, Maradona gets his chance to manage in La Liga and take control of his former club.

The news was broken earlier this morning by Spanish papers and later confirmed by club president Sandro Rosell, who hopes that Barcelona can enter a new and successful era under Maradona.

“We tried to cover all aspects before appointing a permanent coach, and following extensive research and compiled reports, we are delighted to announce Maradona as the new manager of Barcelona.

“We hold all our faith in Maradona and firmly believe that he can conjure the next successful generation of Barcelona footballers and bring us back to the top of the game.

Maradona has expressed his delight at becoming the new boss of ‘Los Cules’ and believes he’ll have no regrets over quitting PSG this summer to take over the side that the Ligue 1 champions defeated handsomely in the UEFA Champions’ League final.

“I’m super excited to sit here today as Barcelona manager. As many of you already know, Barcelona has a great appeal back in South America and I’m delighted that I will get the opportunity to represent this fantastic club both as a player and as a manager.

“Many have said that I will regret leaving PSG for this move but I don’t believe Barcelona are a club in decline at all and I have all the confidence in my ability as well as the players’ that we can compete on all fronts.”

Maradona will succeed his compatriot Martino, who could only manage to guide the Catalan club to Copa Del Rey success after finishing third.
Login to Quote

Nick
8 years
Woo, congrats on getting the Barca job!