We made some huge changes to our squad, but how did these changes affect the start of our season? Would we be beaten by teams of a quality which we aren't used to playing? Let's see how we did in our first season in a higher league!

We started off the season in magnificent style by thumping a much-favoured Burton side 2-0 at their own place. We were on a massive high, and when we took the lead against Birmingham, we began to believe. However, we could only hold on to our lead until the 81st minute. In those final ten minutes, we somehow managed to concede three goals and get knocked out of the Capital One Cup. We put this result behind us, however, and got back to winning ways against AFC Wimbledon. Two back-to-back draws proved how tough this season would be for us, but we finished August in style as a Lawless-inspired performance saw us win 3-0 at home to Southend. I am delighted with our start to this season! To have gone five games without defeat in League 2 is more than what I had expected. This is promotion form, what we are playing right now. I could only dream of back-to-back promotions! 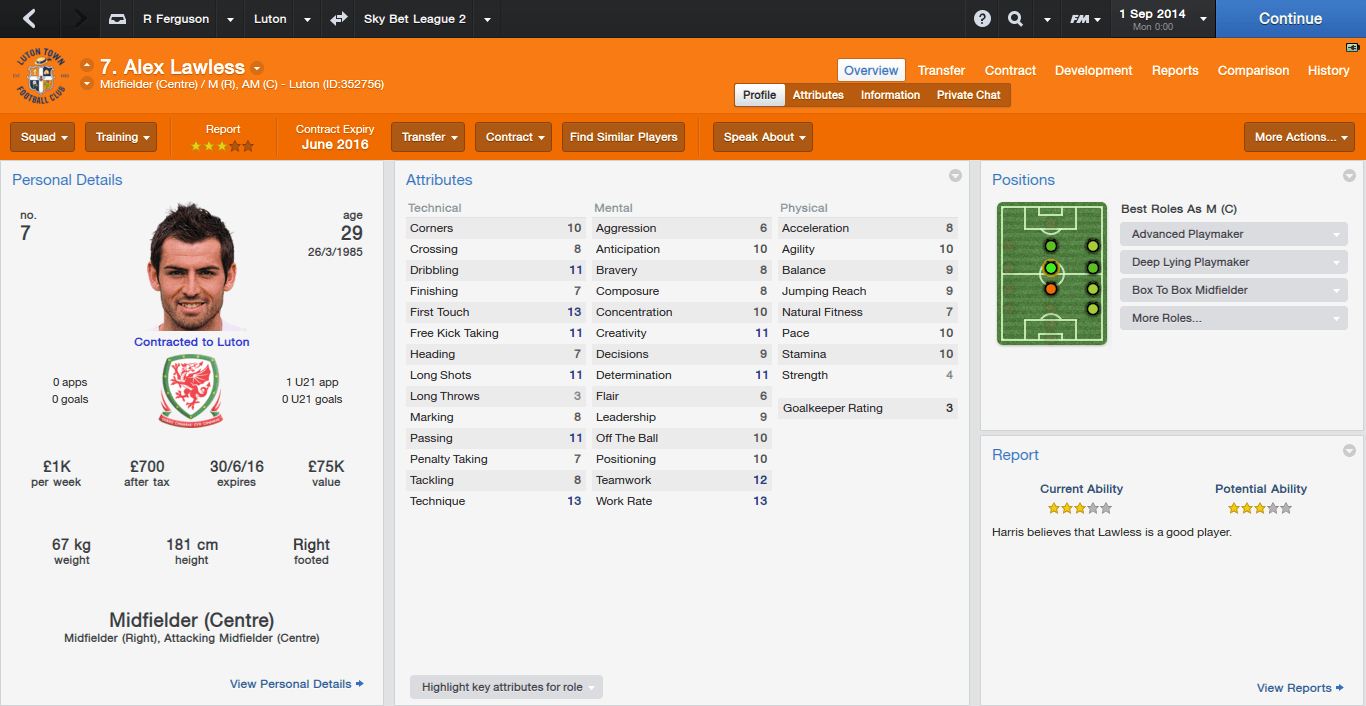 Alex Lawless has been our best player this month. I was honestly worried about our lack of ability on the right wing, but Alex Lawless, who is naturally an MC, has performed brilliantly there! He has already bagged three goals this season and has created three goals. His performance against Southend proved how much he can step up his game when it counts. Hopefully he can go on and continue on in the same vein of form. 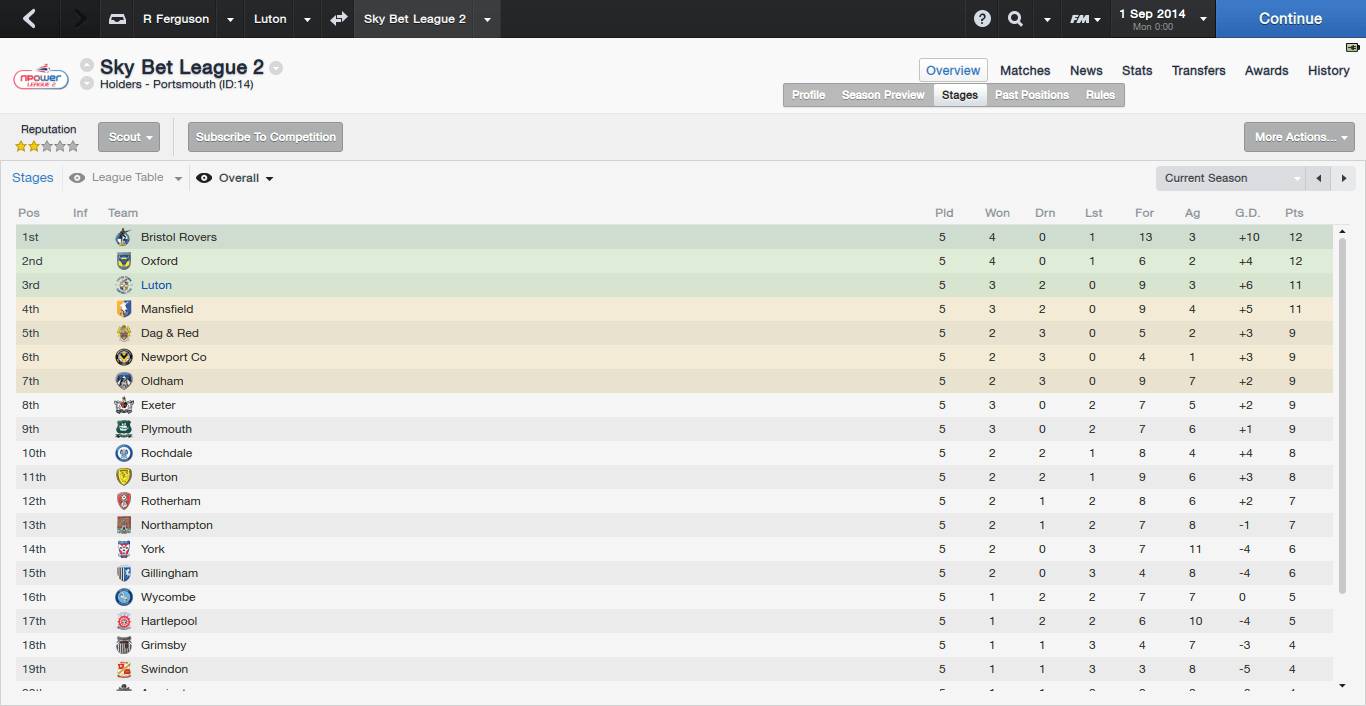 After five games, we are in an incredible third place! I was honestly expecting to be in the lower end of the table this season, but we have upped our game this season and we are scoring for fun. Bristol Rovers are only on top of the league by a point over us, and Oxford are second on goal difference. I have a feeling that us three teams could be the top three teams this season, judging by early season form. If we could achieve promotion, it would be a superb achievement. Hopefully we can do it!

I'm going to take the next two months together as one block update. We play nine league games, and a JPT game versus League One Portsmouth at home. I don't care about that competition, as all I'm concerned about this season is our league performance. If we progress far, that's great, but it isn't my primary concern. From our nine league games, I would like at least 15 points. Judging by our early season form, I do think that this is achievable, but difficult. Hopefully the players can knuckle down and produce the goods to earn us points.

Josh_MU
8 years
That's a very solid start! Unlucky loss against Birmingham, sad to see you go out of the cup, however Alex Lawless has had an amazing start! Great update as always.
1
Login to Quote

pompeyblue
8 years
Firstly, congrats on winning the Skrill Premier, nice signings too and lovely graphics as usual!
To cap it off, great start to the season 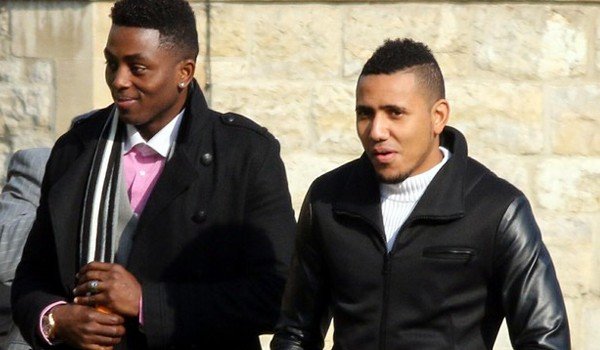 Luton Town's Cristian Montaño, who was previously accused of raping a girl from London, was found innocent earlier today in the aftermath of a messy court case. The wrongly accused Colombian footballer is said to be very disappointed with how he was treated by the authorities, but he would not press charges for false accusation.

This news will come as a relief to Luton fans, as Cristian is indeed a very important attacker for them. The club released a statement earlier today describing their relief that the court case was resolved.

"We are delighted to announce that Cristian Montaño has been found innocent in a court case involving the rape of a girl from London. Our Colombian forward has been pestered by press and police alike for a few months now, and it is great for us and Cristian to finally be able to focus our attention on what really matters to us, football.

We would like to thank everybody who supported Cristian and showed faith in him during this difficult time. Cristian sends his gratitude to everybody, and he is ready to commit all his attention to our season. Thank you for supporting us and supporting Cristian, we can all finally look forward to football now!"
#BelieveInCristian


After what was a truly impressive start to the season which saw us go third in the league, we were looking to keep our good form rolling and increase our chances of finishing in a play-off or promotion spot. Could we claim the fifteen points which we had set out to earn at the start of September?

Playing a League One Portsmouth side in the first round of the Johnstone's Paint Trophy was always going to be a monumental task, but it was one which we could complete, thanks to the support from the fans and the cool heads of the Luton players. We did suffer our first two defeats in the league this season at the hands of York and Bristol Rovers. Despite these two defeats, we amassed a total of four wins and three draws in the league, which is very impressive indeed. We also managed to progress in the Johnstone's Paint Trophy, after beating a very strong Crawley side. I am very happy with this month. We managed to continue in a cup competition, even though I do see it as irrelevant, and we claimed some very good results in the league. 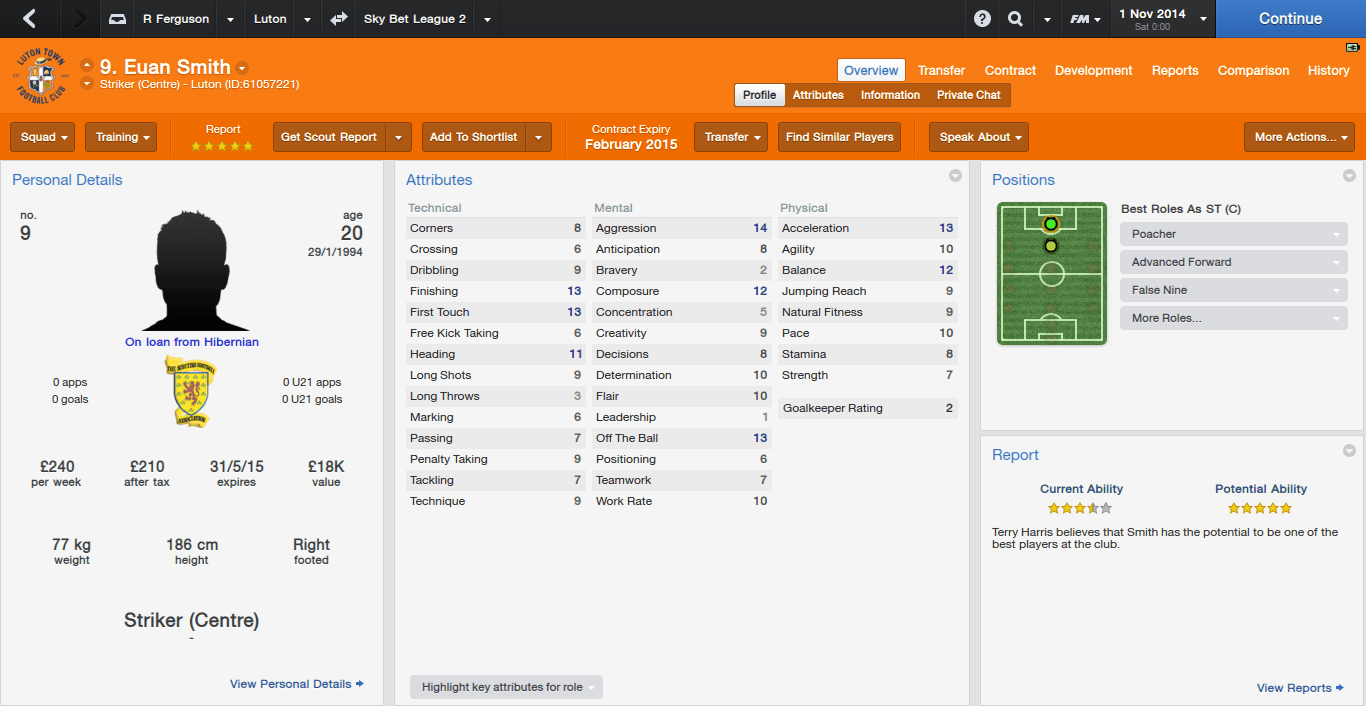 It is the young Scottish striker on loan from Hibernian, Euan Smith, who was our stand-out performer over the course of the two months. The young striker did take a while to get going this season, but he has found some incredible form recently and has scored some crucial goals for us already this season. Unfortunately, he is only with us on loan until February but hopefully we can secure a deal to keep him permanently, or at least until the end of the season. He has been a superb player for us and has been the key to our attacking success recently.

After fourteen games, we find ourselves in a very respectable fourth place. We are tied with third placed Burton on points and on goal difference, with only goals for separating us. I am delighted with us picking up fifteen points over the past two months, which is coincidentally the point target that I had set previously. We currently have a three point cushion inside the play-off spots but we are already nine points behind league leaders Bristol Rovers, who have taken this league by storm. Hopefully we can stay around the promotion spots this season.

November is scheduled to be a very busy month, with eight fixtures for us to play. These include an FA Cup match-up with Shrewsbury (League One) and a Johnstone's Paint Trophy tie against Exeter (League Two). In our six league games, I am aiming for ten points. It is a big ask of my players, but if we can claim this number of points then I can see us as one of the promotion favourites.

AlexTHFC
8 years
Nice update as usual, great results other than the two defeats, but as a promoted team, you're doing very well

Josh_MU
8 years
Man, you're doing very well! Hopefully you'll be up there come the end of the season!
1
Login to Quote