Walter
6 years
Feliks, Josh, Hunter Thanks guys, it's going to be close!
Login to Quote

Nathaniel
6 years
Hope you don't get promoted and that the Braga B win the league.

Excellent update though, well thought out and a nice layout.

I personally think, of stories I have read, you are in the top 5 on site.:)
1

Bantams
6 years
Just read the full story from start to finish here Walter. An absoloute epic read and I must say I can't wait for the next one, I'm in awe of it! Best of luck for the remainder of the season, can see you just sneaking promotion if you keep up the form!

( Definitely will be following more regularly as of now

Walter
6 years
Nathaniel Why Braga B?

Anyway, thanks for the kind words.

Bantams Thanks for the comment Bantams, promotion would really just be an added bonus! Again, thanks for the read, I'll be sure to catch up on yours, too

The Boy From Temperley 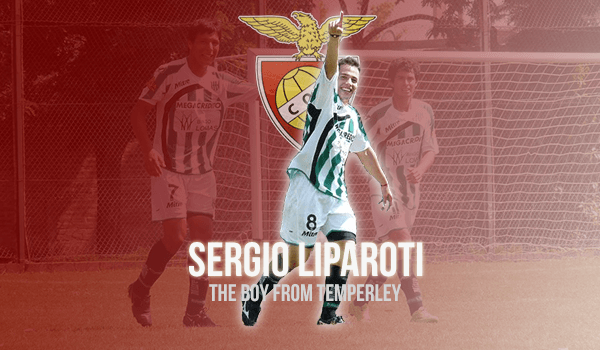 Liparoti (center) is a striker and the Argentine began his career at Banfield in his homeland. After years in their youth team, the young striker did not make the grade and was subsequently released by the club.

Liparoti made the journey to Italy, a nation he is eligible to play for through his mother, and joined Serie B outfit Crotone. In his time at Crotone he failed to make a league appearance and his contract was not extended by the club.

With no club for the entirety of the of the 2013-14 season, Liparoti admits he had dwelled over the possibility of an early retirement, revealing that at points it had been in the back of his mind more than once.

It was towards January when manager Vitor Martins was first alerted about Liparoti. Scout Pelé is credited with finding the Argentine on a scouting mission which saw the scout scour through the depths of Italy's Serie B.

By late January, a deal was tied up and Liparoti was registered for the remainder of the season and is set to make his debut in the clash versus Braga B. Manager Vitor Martins kept his cards close to his chest regarding team selection but said that Liparoti would be given the chance to show his stuff in the upcoming month.

Vitor Martins: "Sergio is a great talent and we've made a great signing here on a really cheap deal. He's a natural number nine but one that can dribble and create opportunities for others as well as himself. With the right training I can see him making a great impact here at the club and I think he's got great potential ahead of him, as well."

Sergio Liparoti: "I have to credit Vitor for giving me this opportunity to play for such an up and coming club like Oriental. Portugal is a new experience for me but the playing style between here and South America is very similar, so hopefully the transition won't be difficult. I'm really looking forward to making an impact and I want to do great things here." 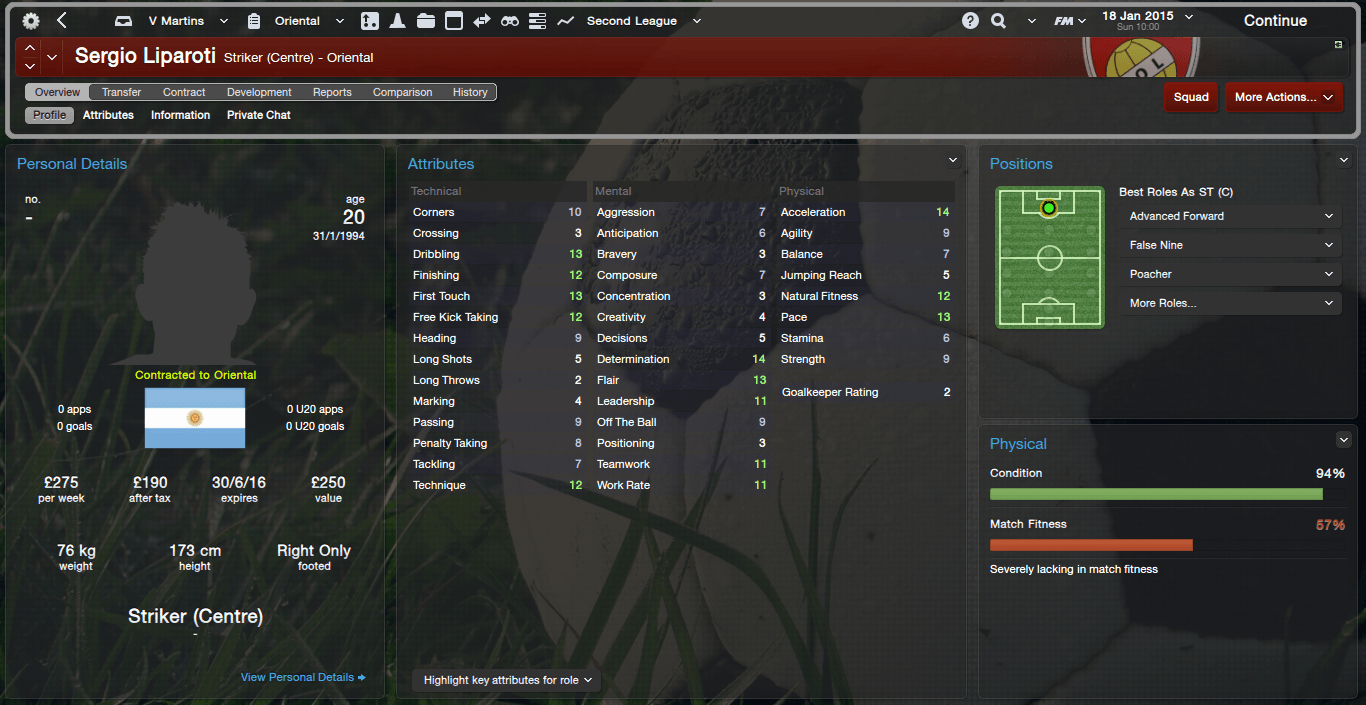 Neal
6 years
He looks talented, especially for somebody so young! Hopefully he scores goals for you for years to come

Jer
6 years
Looks pretty decent.. for Oriental ;). Best of luck with him, expecting big things. I think Pastore came out of Temperley (the city).. You should tie him on a long-term basis!
1
Login to Quote

Josh_MU
6 years
I love that graphic! What a player!
1
Login to Quote

Walter
6 years
Nealão Yeah, we need him next season because I feel Balack and Figo are just slightly declining

Yeah, I will look to tie him up if he performs well

ALSO... I'd just like to say thanks to all the readers for helping me get to 5,000 views. Let's hope it continues to grow!
Login to Quote


I've hit the big 2k! I'm not going to make an endless, boring post that you're not going to read, all I going to say is just a couple of thank you's and that. Firstly, thanks to Stam for creating this awesome site which I am now thoroughly obsessed by.

Next, I'd like to briefly thank the people that have made me feel so welcome here. Pauker, my main friend here, has been great to me, and we always have great chats about a wide variety of things to do with FM and stuff outside of it.

Also thanks to people like Rablador, always one for comedy, Lucas who is not here atm I don't think but has always been a spectacular mate to have. My fellow Aussie edu1878 who got me talking on GC for the first time and is why I go on there everyday. shylax, or more commonly known by his old username ebEliminator. He's been a great guy to talk to about FM and while he's not on often nowadays he's still one of my best mates on the site.

Also Justice for the nicknames, tactical advice and just general kindness. Nealão, who is generally one of the nicest people I've ever heard speak! Also P-KIDDY who is also not online a lot but was a big support in my early stories. Others such as Louis O., Josh_MU, Nathaniel, pompeyblue TVDLC123, Nick (Mr. Graphics), AlexTHFC and an endless list of others have just made my time here all the more enjoyable, and have all taught me something about FM

Do not feel down if I didn't include you in this list, it's just too long to remember. You know who you are if you didn't get on this list and I have so many more kind things to say. All in all, thanks for being such nice guys, all of you - and here's to another 2,000 posts!

Josh_MU
6 years
Aw Walter, I got a tear coming down my eye, no wait, just joking. Thank you for being a great friend! Congrats on 2k posts! :-)
1
Login to Quote

The Sharks Are Circling 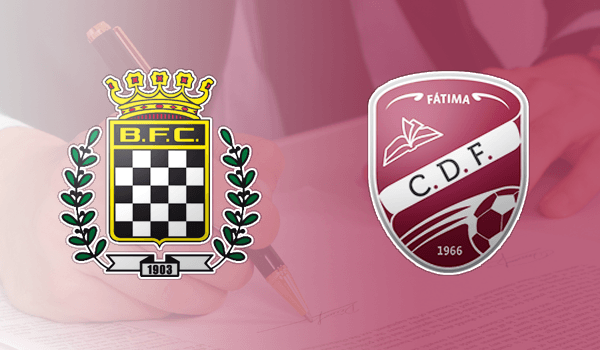 I was sitting at my office, just doing my job - in this instance looking to tie up a crucial transfer deal when I heard a noise from my computer. I checked my email which had one new mail message...

It was sent with 'High Importance' as I could see the red exclamation mark beneath it. I clicked it open and got a big surprise. I'd been getting on with my job fine here at Oriental. I'd never been sacked before and had never been close, but I'd also never been offered another job while at another club.

But now it has happened twice in quick succession. The email I got was from Boavista, one of the famed fallen giants of Portugal. Founded in 1903, this club is graced with a grand history. They are one of only five clubs to have ever won the Primeira Liga, Boavista were Porto's second biggest club, behind the city's current powerhouse FC Porto.

That was until they hit financial trouble, and fell down to the third tier of Portuguese football. After several seasons of narrowly missing out on promotion, Boavista currently sit atop their National Championship group, undefeated.

The other offer I got was from fellow National Championship outfit Fátima. They were another team that were in good form and they were also pushing for promotion like Boavista were.

The email came through from their chairman Sérgio Frias about their intentions and how they wanted to see if I had time for an interview. In all honesty, I've never really liked Fátima, and they don't seem to have a great history about them. 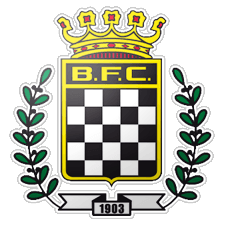 For the Boavista job offer, I attended the interview. They talked to me about what would happen if I were to take the job and what the board's philosophies were. While in discussions, they gave me a little information sheet about their philosophies for the club. 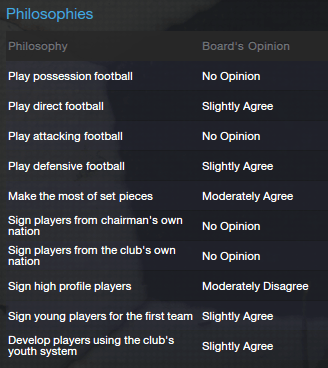 All I can say is they seem to slightly prefer 'ugly' football if I can put it that way, something I'm not for as I'd prefer to play a style that is easier on the eye. The one thing I do like about their philosophies is that they prefer to integrate youth into the team, something I'm all for.

Despite this, I can't say I'm very tempted by their offer. What's the point of jumping down a division when I've got a fantastic project going on here at Oriental? We're a really ambitious team and I think we are in a better place right now. 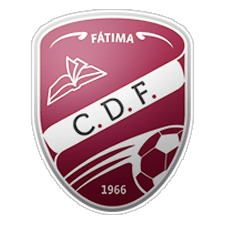 Fátima are never a team that impressed me that much. For one, I don't like their logo - but on a serious note, and for the same reasons as why I don't want to go to Boavista, why drop down a division - and for a club that may not even go up? This time, I didn't even attend the interview.


Going to the interview was a risky move - and I wasn't sure what the board's reaction would be. Would I be fired and be left without a job? Would I be offered a new contract? Here was the reaction.

Luckily, they value me, and offered talks to stay at the club and any changes I'd like to make. Luckily for them, I don't want to.
Login to Quote

Josh_MU
6 years
Thank God you're not leaving.
Login to Quote