Yes, The Hawks are flying!

The whole Greg Dyke thing? That's far from over!
Login to Quote

Icarus
8 years
Great results so far mate, you'll be in Premier in no time. 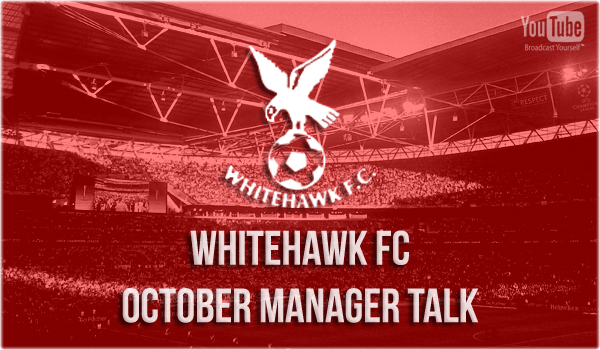 Whitehawk TV Reporter: "Well William, we're here a month later after our last meeting and your team has gone yet another six games without defeat! Just how good has your team played?"

William MW: "The players have been on a different level over the last couple of months. Everybody is coming closer and closer to hitting peak fitness and their confidence is building with each passing game. The quality of our football has shone through over the past month and we have earned some absolutely fantastic results. The players have hit the ground running this season and we have taken the league by storm. Every victory brings us one step closer to our targets and further away from our rivals. I have absolutely no doubt in my mind that my players are strong enough physically, and mentally, to win the league title this season, but we will take nothing for granted. Not yet, not ever."

Whitehawk TV Reporter: "You recently employed a number of sports psychiatrists and scientists. Is this an attempt to improve the non-training part of your players' games?"

William MW: "My players are always training. When they're not on the pitch or in the gym, they are preparing mentally for an upcoming game, resting from hard work, analysing their own performances in matches and in training, or challenging their minds to increase their mental strength. That is why I brought in a couple of psychiatrists, to help my players win the mental game. It is vital for players to be in the right shape of mind at all times and by bringing in a number of highly-qualified professionals, we stand a better chance in games where mental strength is put to the test. As for the scientists coming in, it is important for the players to be physically well at all times and to be as healthy as possible. Not only do the scientists manage the players' condition, but they teach them about how to take good care of themselves. The players have become more aware of their bodies and how their bodies react to training, playing, eating, sleeping, resting, and so on. If we can be in the best possible shape both physically and mentally, then all we need to do is work on our technical game, which is what we save for the football pitch."

Whitehawk TV Reporter: "Your recent death threat has been well publicised. Do you have any comments on the matter?"

William MW: "Honestly, I have tried my best to forget about it. The best detectives in Brighton are looking in to the threat which I received from Greg Dyke and I trust them to deal with it accordingly. My mind is fully focused on football and my only goal is to win our next game, and the game after that, and the game after that. Of course, it was quite frightening for it to happen but it is over now, as far as I am concerned, and I would like to continue on as if it did not happen." 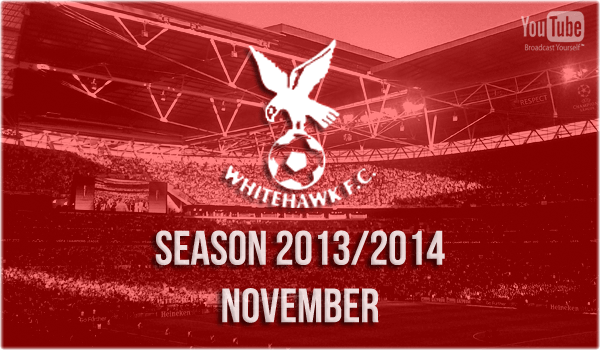 We kicked off the month with a thrilling 4-2 home victory over Havant & Waterlooville in the league. Next up was a much-feared trip to Dartford in the FA Cup, where we battled hard for a much-deserved 0-0 draw, which meant a replay would be contested. Another draw followed as we failed to score against St. Albans, although our defence proved to be solid. We returned to winning ways as a Sergio Torres goal saw us beat Chelmsford in the league. We then ran out as victors against Dartford in our replay, after a fantastic 3-2 win. Weston-super-Mare frustrated us with yet another draw before Havant & Waterlooville earned their revenge against us as we were knocked out of the FA Trophy. It was a very mixed month but not one I can complain with. Despite being knocked out of the FA Trophy, we were unbeaten in the league and we had progressed past tough opposition in the FA Cup. Onwards and upwards! 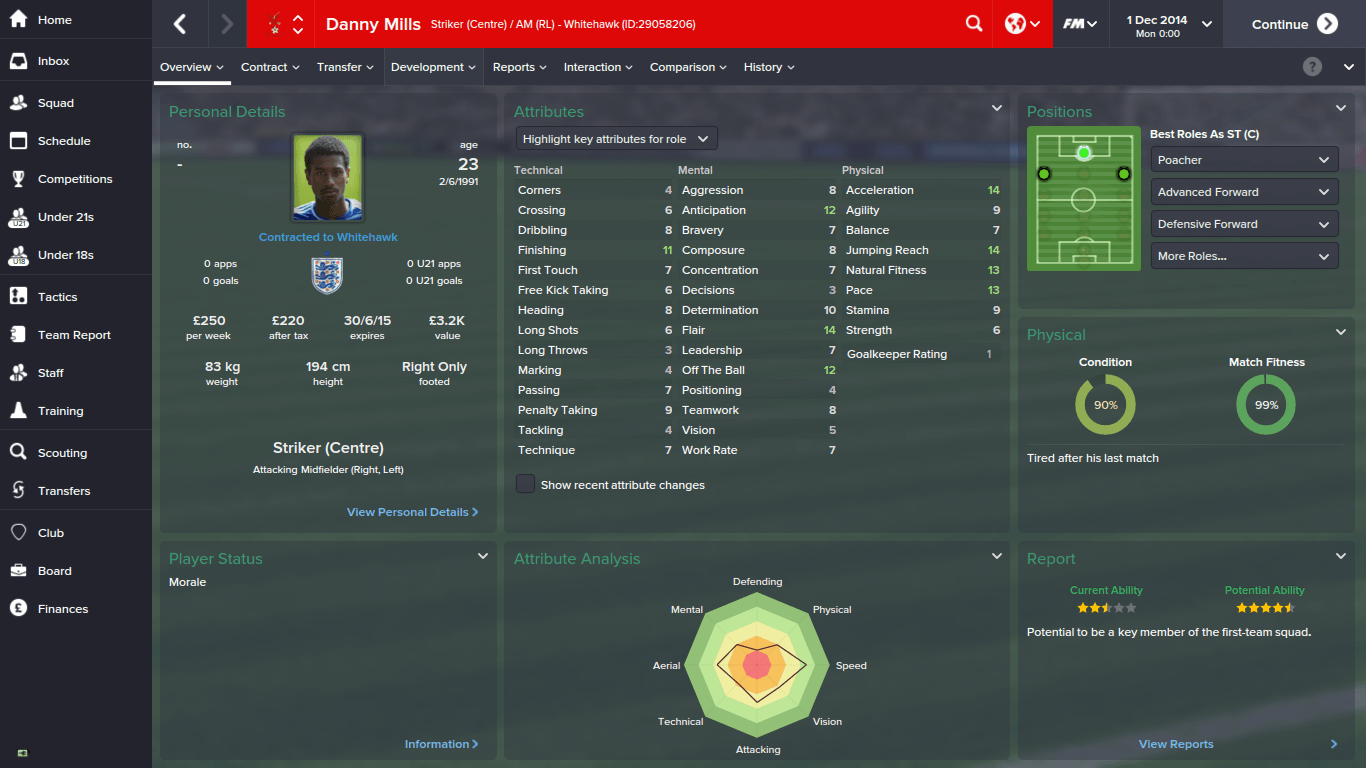 Danny Mills was our best player this month as the pacey attacker proved to be impossible to contain. I play Mills on the right wing, where his pace and movement has proven to be unstoppable. He has scored goals, created goals and been a thorn in the side of every opponent we've faced. He has been sensational for us. 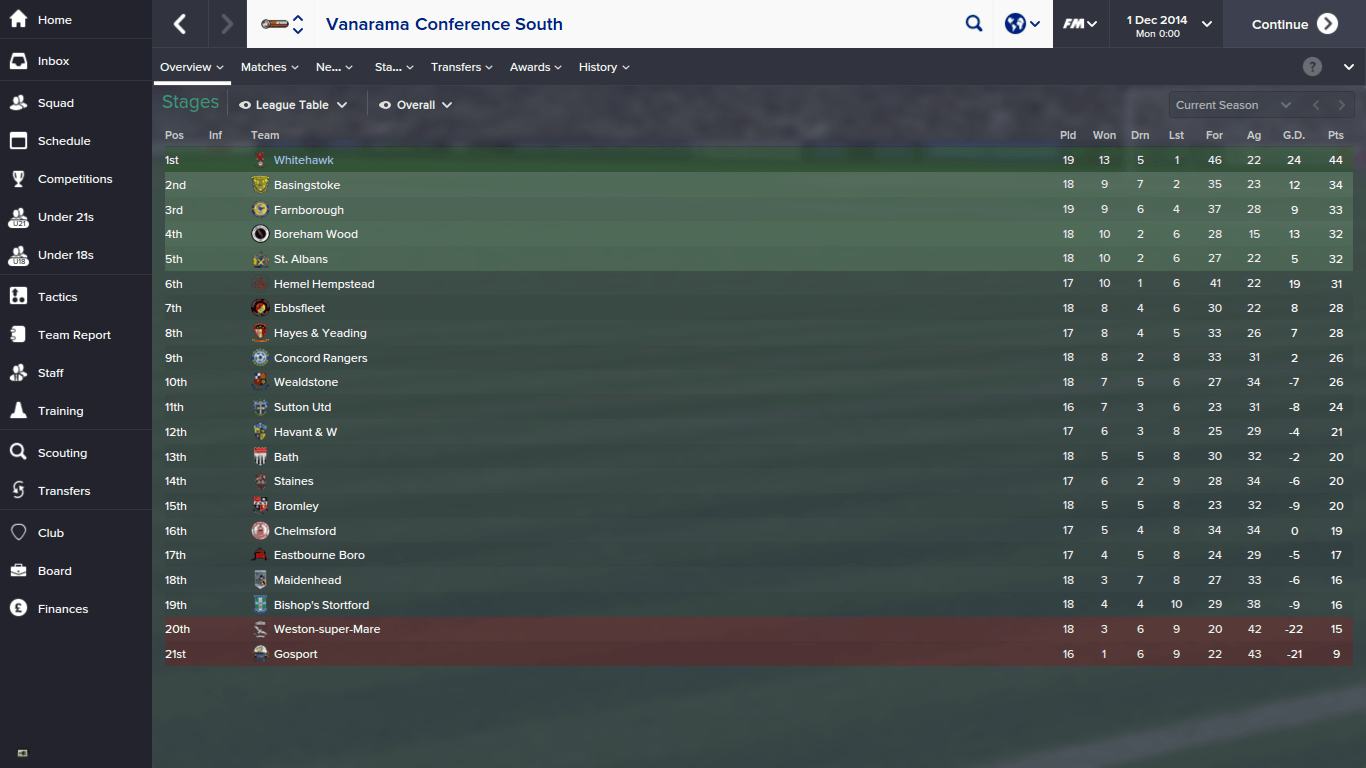 Our unbeaten run sees us top the league by 10 points after 19 games played. Basingstoke in second place have played one less than us, however. We remain the league's top scorers and our GD of +24 remains far superior.

We open the month with an away trip to Shrewsbury (Sky Bet League 2) in the FA Cup. I don't expect to get anything out of this game but we will give our all from start to stop. Gosport at home and Sutton United away are our two next league games, before we host Eastbourne Boro on Boxing Day where we will be looking to celebrate the holidays with a victory. Our final match of 2014 sees us travel to Farnborough, who we beat 4-2 earlier on in the season. If we can get nine points, I am more than delighted.

Neal
8 years
Doing superbly in the lead, nobody within striking distance

pompeyblue
8 years
Heh, Havant beat you in the F.A. Trophy

In all seriousness, another superb month, your league form is truly magnificent 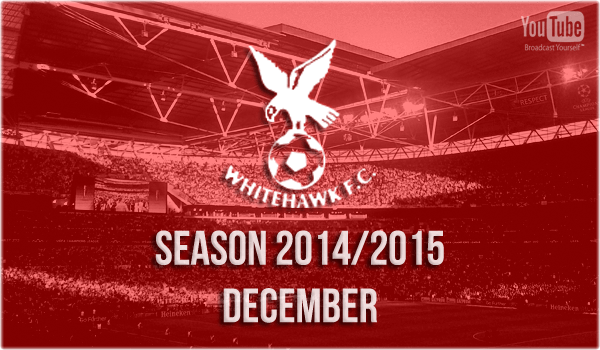 We got our asses kicked by Shrewsbury, but no surprised there. We lost to a team that is challenging for promotion in a league two tiers above us. In retrospect, scoring twice and losing by three goals isn't actually that bad, considering the difference in ability between us. We did make amends, however, and posted four consecutive wins in the league. One of our victories included a 5-1 Boxing Day thumping of Eastbourne Boro! I'm delighted with our form in the league this month. While my team has been fantastic, I can't pick a stand-out individual performer and so there is no Player Of The Month for December. 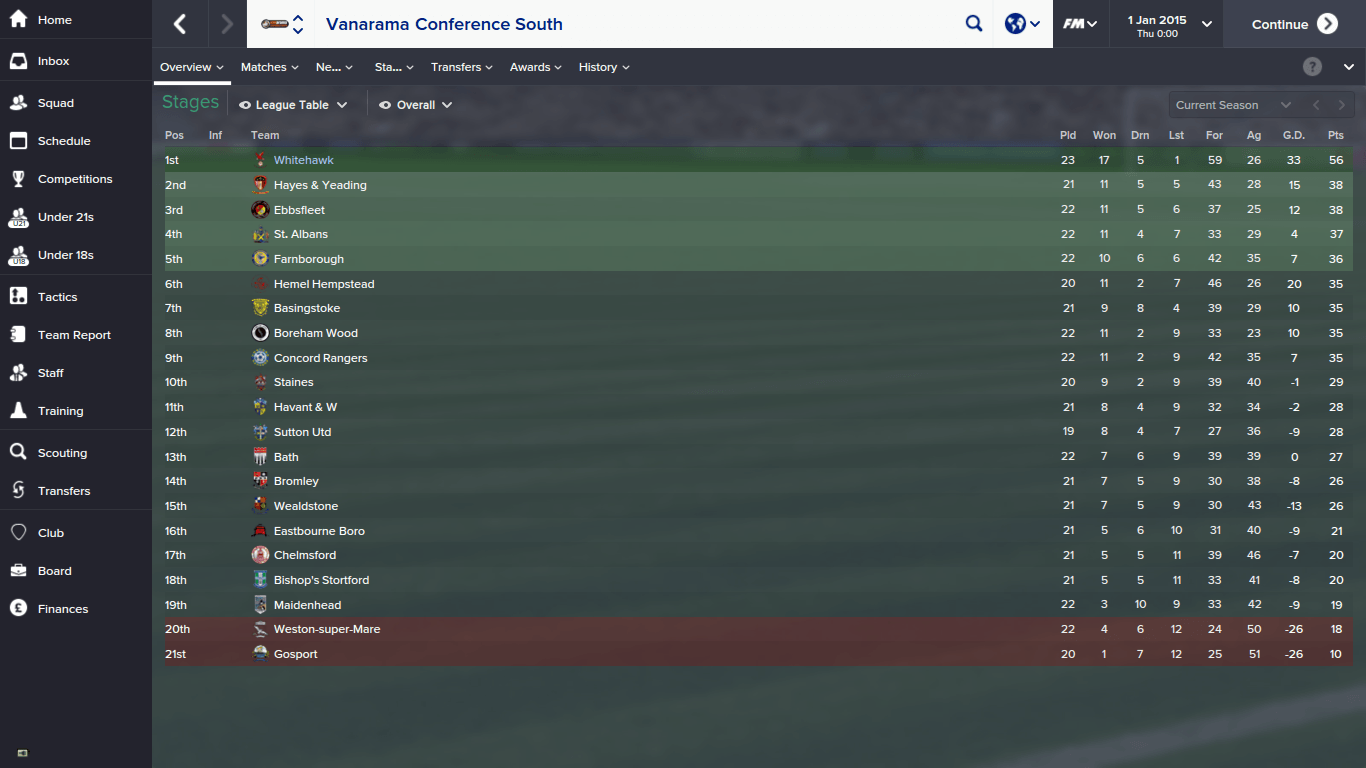 We now hold an 18 point lead at the top! Of course, our rivals do have games-in-hand but there is no guarantee that they will win them all. We are running away with the league title and nobody can catch us. Hopefully we can wrap up the league soon and focus on improving the squad for next season.

We have six games next month, starting off with a trip to Eastbourne Boro. I fancy us to win most of our games and I expect to earn at least 13 points. Hopefully we can achieve this.

Walter
8 years
Way too easy, promotion is a certainty
1
Login to Quote


I want the title so badly

Justice
8 years
Toon, yes we are!

Iconic
8 years
Justice this is being a great story so far justice keep the results coming and best wishes with Greg Dyke.
1
Login to Quote

Will be interesting to see Dyke pinned to the ground by several bodyguards, i'm hoping for a graphic of that please?

Just thinking... is it an act of treason to willingly attempt to beat the Prince's team?
1
Login to Quote