Walter
7 years
Brought a tear to my eye, Justice


Sadly only 18 players in the squad, so 18 reacted well 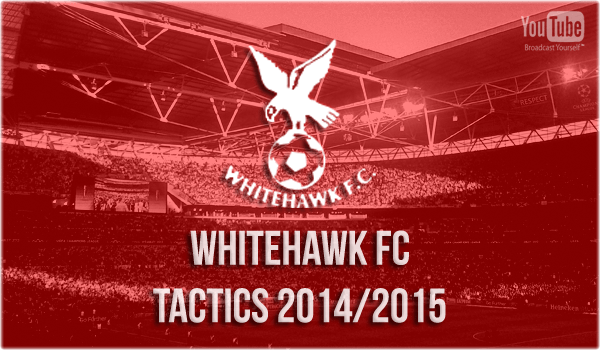 You've seen the club, manager and squad overviews, now to have a look at the tactics which will be using this season. Will they become available for download? Perhaps, maybe one day. For now, however, I'll keep the files to myself until I decide to share my work.

When you join a club, it is important that you establish a certain style of play for your tactics. Personally, I prefer a high-pressure high-possession system with plenty of fluid movement and relentless pace. However, I do not think that this style of play would suit Whitehawk quite yet. For this reason, I have chosen to work with a cautious, possession system, using the flanks as our main approach to goal. 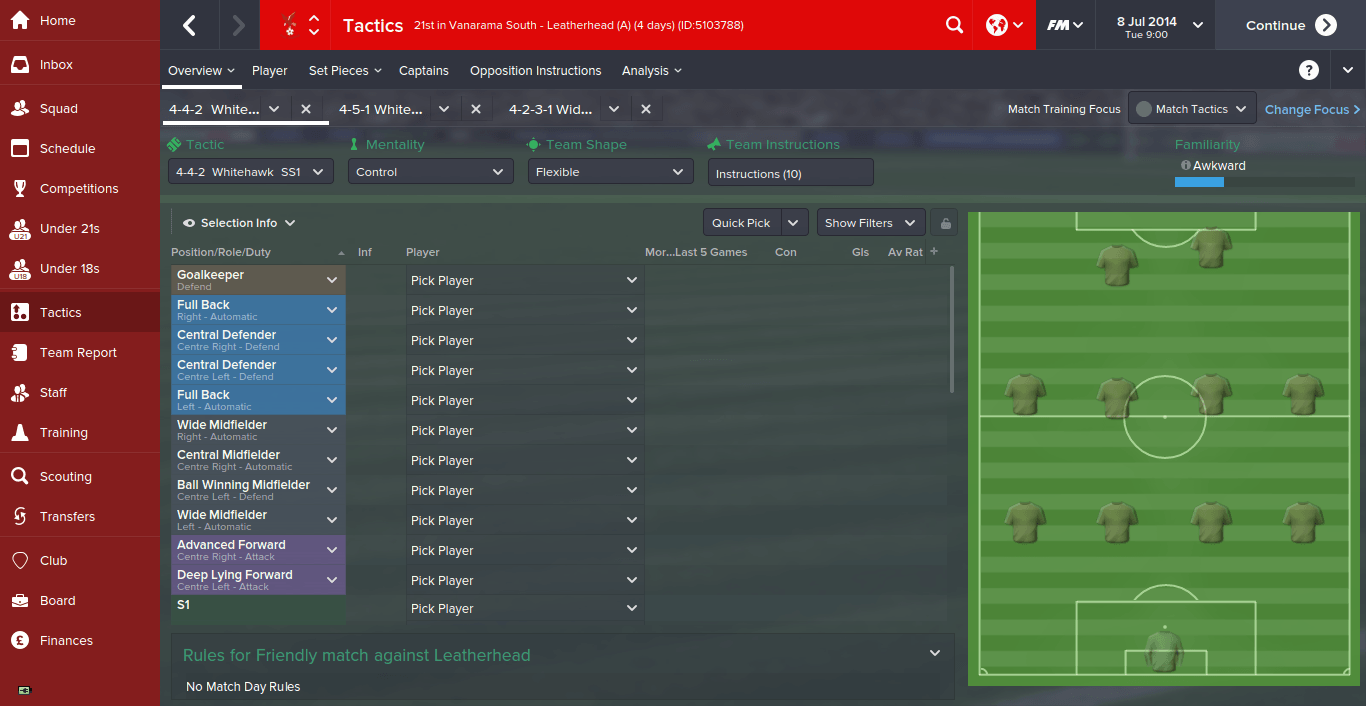 This 4-4-2 will most likely be my most used formation this season. We will look to utilise the flanks as much as we can and keep possession of the ball, without leaking too much in defence. In terms of player roles, they are quite basic. The back four is a flat one, with the two full-backs contributing to whatever mentality I wish. The midfield is quite flat two, with two basic wide-midfielders and a ball winning midfielder partnered alongside a basic central midfielder in the middle. Our most expansive set of players is up front, as we will be using a deep lying forward alongside an advanced forward. The deep lying forward will look to pick up the ball off one of the midfielders while the advanced forward will close down space and opposition defenders. 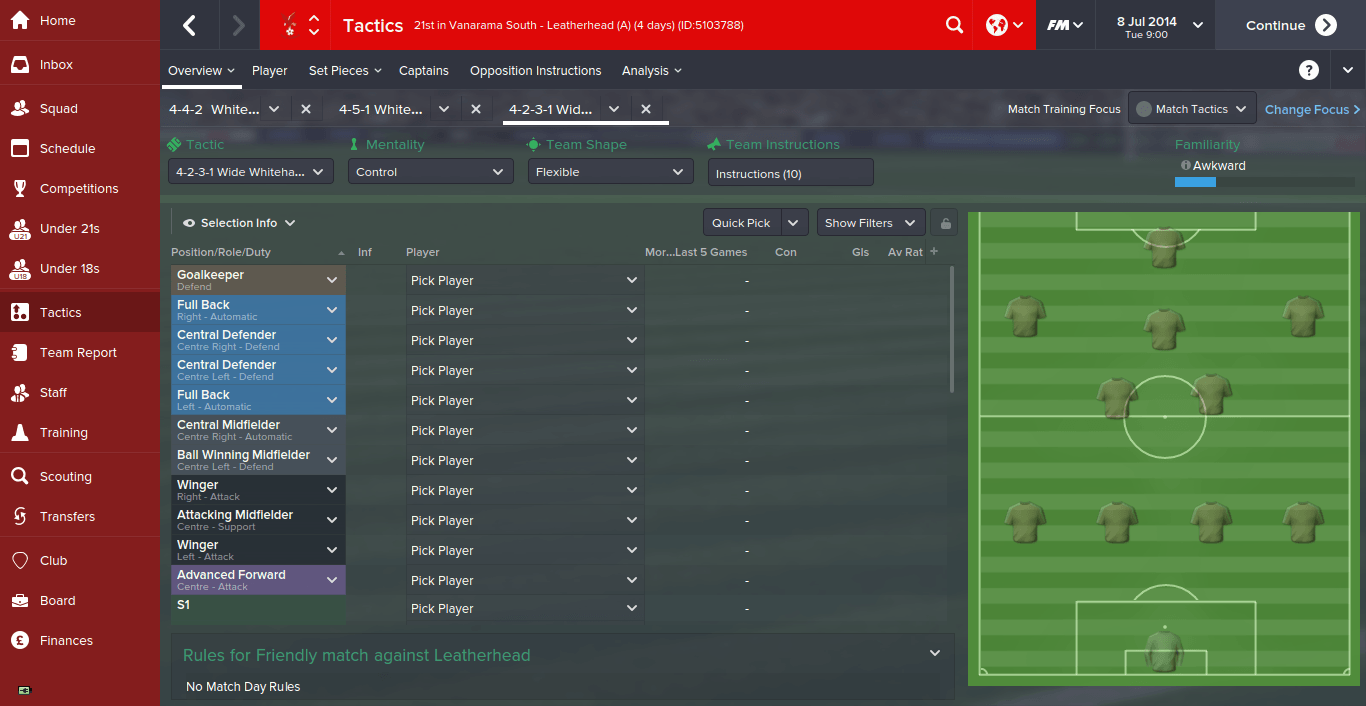 This is very similar to the 4-4-2, with the only difference being the deep lying forward has changed to an attacking midfielder, and two wide-midfielders are now wingers in advanced positions. This will be my formation for games where we might find it difficult to link up attacking play and get the ball up the pitch successfully. 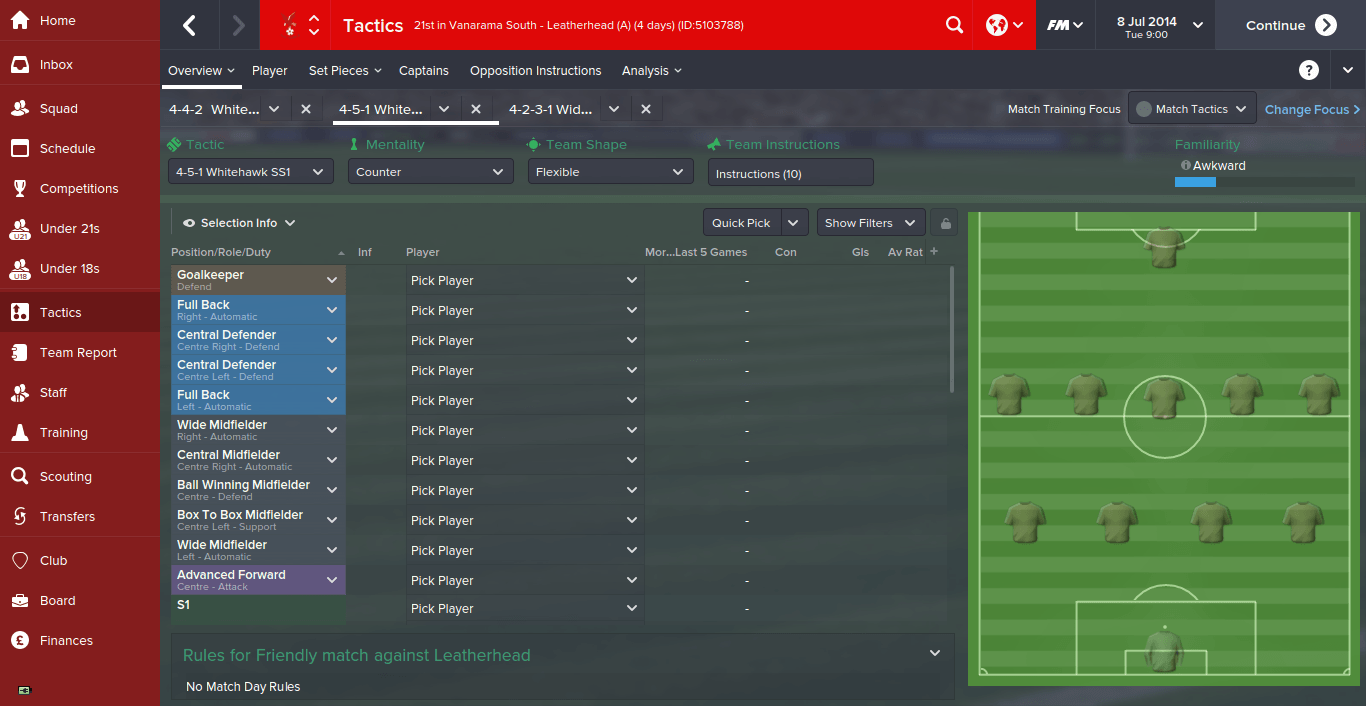 This is the formation which I will use when I need a strong midfield presence. The three midfielders supplement each other well, with a central midfielder, box-to-box midfielder and a ball-winning midfielder in that area. This will be for games where we might struggle to have possession but we want to suffocate our opponents in dangerous areas.

Josh_MU
7 years
Brilliant update! I think that 4-4-2 is your best option, you can't go wrong with a traditional formation in the lower leagues! Also, very nice layout!
1
Login to Quote


Thanks, hopefully they work well!

Walter
7 years
Agree with what Josh said, the 4-4-2 would probably be the best option. I like the graphics, too, as always, Justice
1
Login to Quote

No1VillaFan
7 years
I LOVE the graphics, the tactics are great and the story is amazing keep it up

pompeyblue
7 years
Loving the updates, great quality and presented brilliantly!
I agree with above, 4-4-2 is a simple and effective tactic in the lower leagues, at least it has been for me.
1
Login to Quote

Justice
7 years
Walter, No1VillaFan & pompeyblue, thanks for the comments guys! Yes, I reckon the 4-4-2 will work well

Ziechael
7 years
I think you should play 443 (royals get an extra player surely?)
1
Login to Quote


We get the referees on our side My first action as manager of Whitehawk Football Club is to begin my search of players who could fit in to our squad well. Unfortunately we have little scouting resources in the Vanarama Conference South division so trialling players is the best form of scouting for us, as we picked up three players to join us on trial for two weeks each. You may recognise the name of one of the players, although he is not the famous boxer! 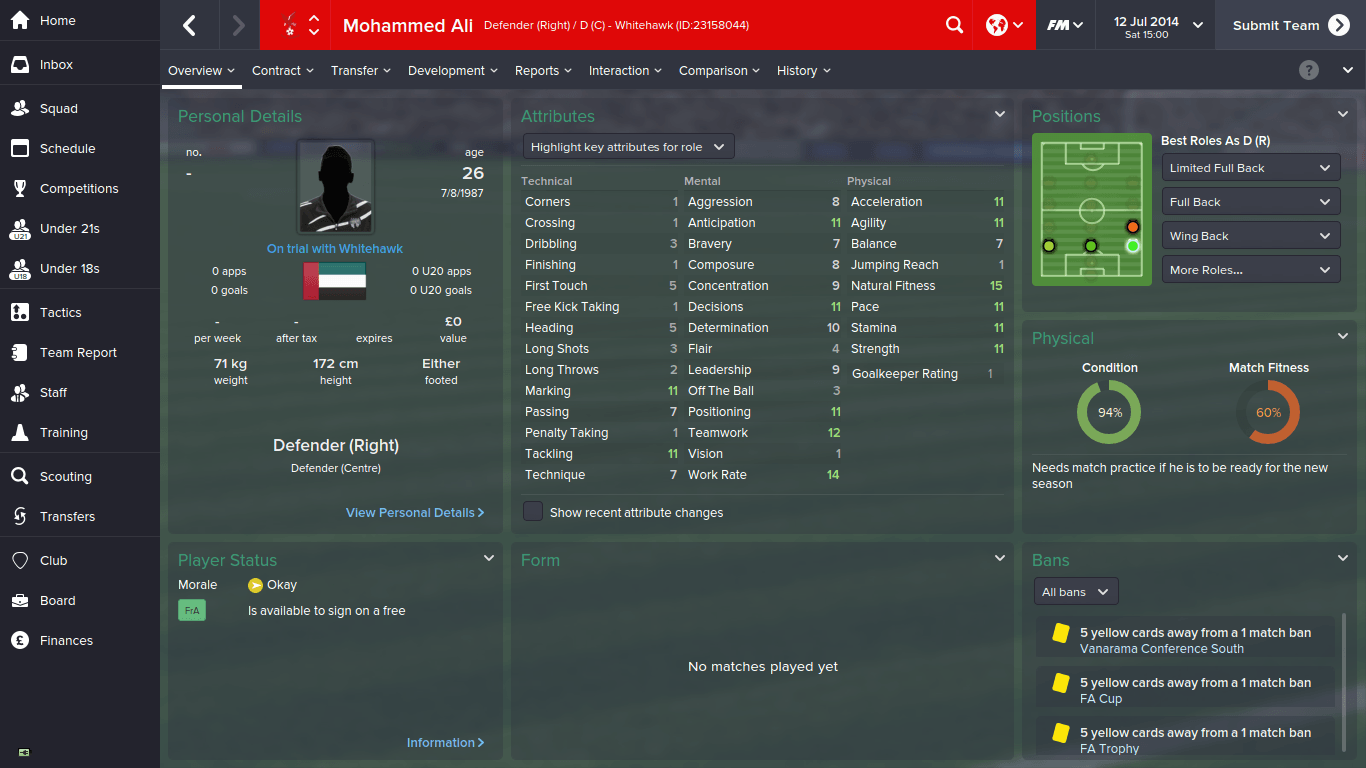 Mohammed Ali, just like his namesake, is a very physical athlete. His natural fitness, combined with his pace and strength, could become a great asset for us should I end up signing him. He has an impressive work rate and his defensive attributes are quite good too. His previous club was Dartford, but he only managed one appearance in his time at the club. Before that, he played for Al-Nasr in the United Arab Emirates. If we do decide to sign him, he might turn out to be an important player for us. 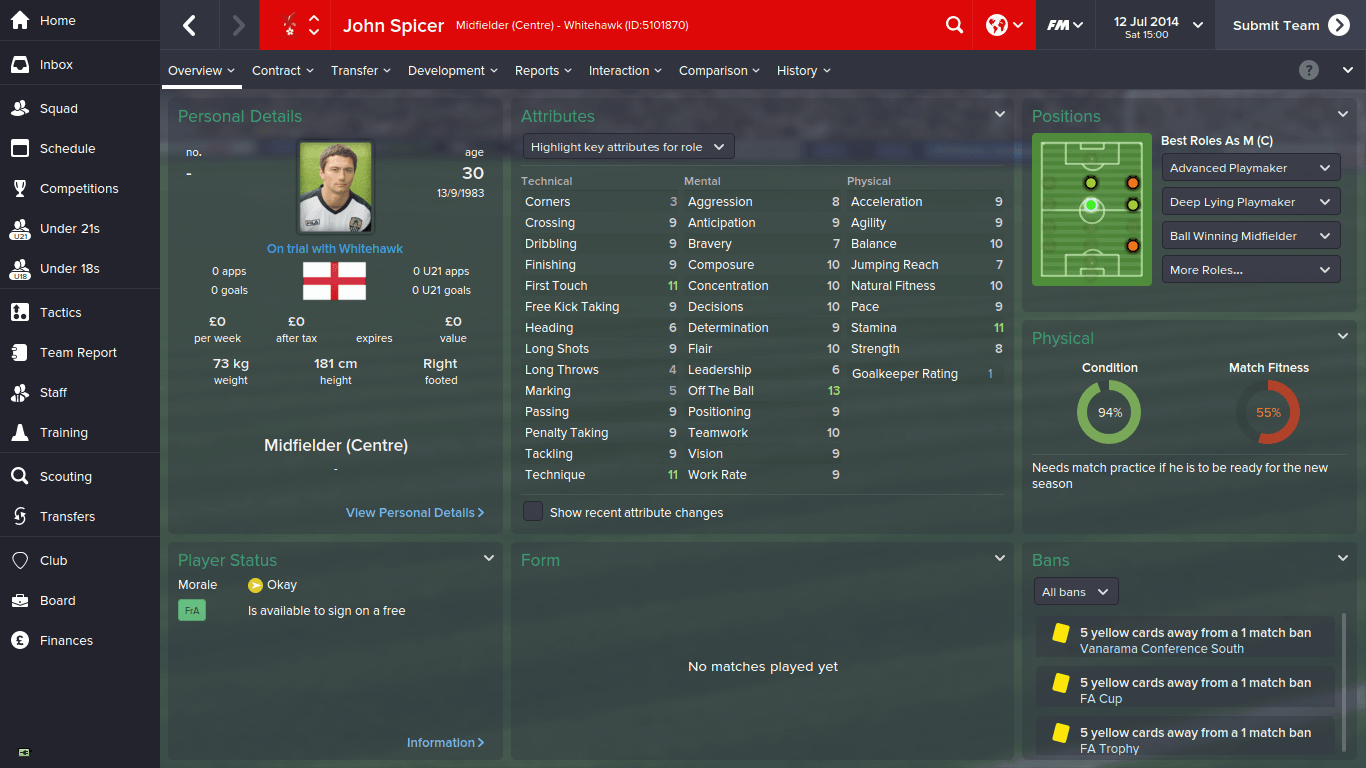 John Spicer is the second player to join us on trial. The midfield veteran has plenty of experience to bring to the team, and has even played in the Sky Bet Championship for Burnley and Doncaster. The former Arsenal youth star has since declined as a player and his most recent spell in football was for Southend in the Sky Bet League 2 during the 2012/2013 season. While he might not be a fantastic player physically or technically, his intelligence is something to admire and he could become a real driving force in our midfield, should we choose to sign him. 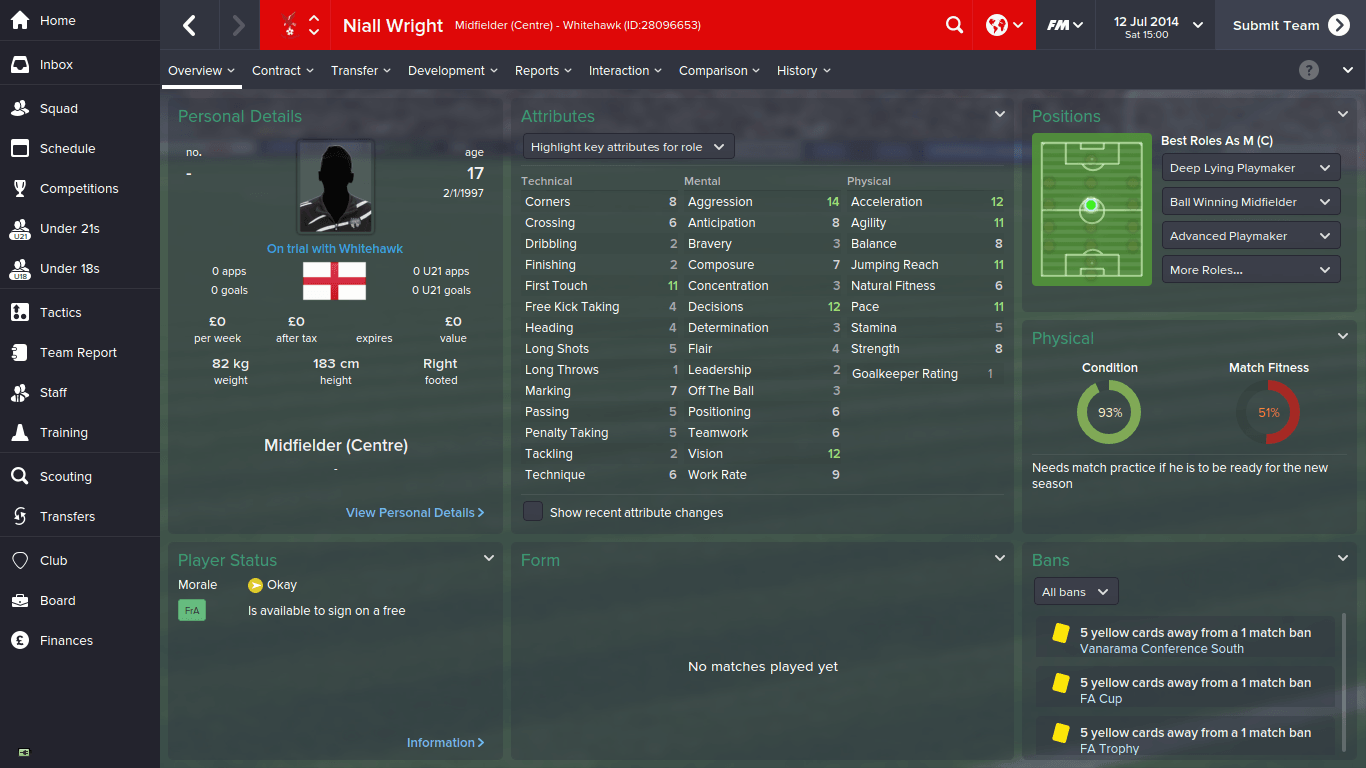 Niall Wright is another midfielder in on trial with us. The former Woking youth notched up an impressive seven appearances for them in the Vanarama Conference division last season, at such a young age. He already has a lot of ability and could become a fantastic player in the future, with the right coaching and game-time. His strengths are his speed and awareness of the game, while control of the ball is rather impressive too. If we do sign him, he would certainly be one to watch for the future. We played five friendlies in our first pre-season of this adventure, including a closed-doors training match against our under-21s. We won that game by a very comfortable 5-1 scoreline. A rather decent 2-0 victory over Leatherhead followed, before we hosted a much stronger Torquay side, where we came out winners in a thrilling 4-3 game which was contested from the first whistle until the last. Our remaining two friendlies brought no such victories, as we were beaten by Aldershot and were held to a draw by Sittingbourne. For me, however, pre-season form does not dictate your season. Of course, it is nice to win as many games as possible, pre-season or not, but it is more important to build up fitness, team cohesion and an understanding of your tactics. For me, we developed all three very well and we are looking forward to the start of the season. Zero players left the club, while we brought in no less than six. When I arrived, the squad was a small one, with only 18 players in it. With fixture congestion at the forefront of my mind, bringing in players who could step in and perform at this level was a must. I'm happy with the players who I did bring in, as they can all have a major part to play.

Taylor Parmenter was my first signing of the season. The twenty-one year old central defender came in on cheap wages and a lot of potential to become a decent footballer for us in the future. He was brought in to add depth to the squad and possibly challenge for a starting spot in the future. While he is quite a limited defender, he can be useful on occasion.
Fee: Free Transfer
Value For Money: Mohammed Ali was the second player who I brought in this season. He was on trial with us for two weeks, and impressed when he played in friendlies. He is a very physical right-back who is good enough to start for any team in our division. Unfortunately for us, he did not receive a work permit so cannot play for us yet. I put the blame on my scouts and assistant manager, who all informed me that he would definitely get a work permit. Paying his high wages for at least four months (until we can apply for a permit once more) is down to my staff's poor judgement.
Fee: Free Transfer
Value For Money: N/A Junior Morias rounds up our first three signings of the summer and the nineteen year-old striker is possibly the best of them! The Jamaican teenager possess a lot of pace and strength and has a lot of potential on top of that. He is already good enough to start for us and will battle it out with Barnes-Homer for a regular starting spot as our main striker. I have high hopes for Junior and I reckon that he could light up the league like Obi Anoruo and Euan Smith have done for me so often in the past.
Fee: Free Transfer
Value For Money: John Spicer was another player who was on trial with us before signing a permanent deal. The experienced midfielder will add depth to our midfield and will try to contend for a regular starting position in the team. He is on high wages but will hopefully be worth it, come the end of the season.
Fee: Free Transfer
Value For Money: 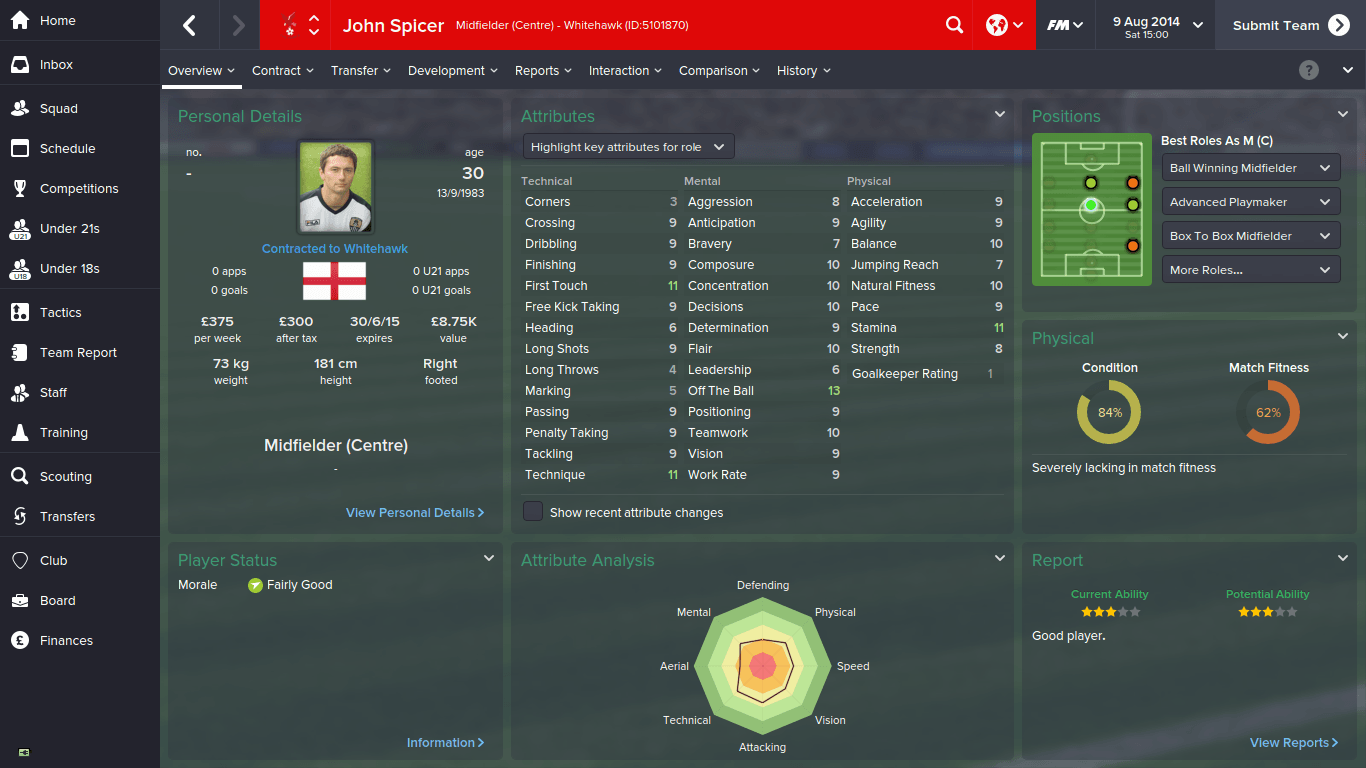 Niall Wright was our third trialist and he too was handed a permanent deal at the club. He will compete with fellow new signing John Spicer for a starting spot in the team. At the tender age of seventeen, he has a bright future ahead of him if he can continue to improve at the rate which is expected of him.
Fee: Free Transfer
Value For Money: 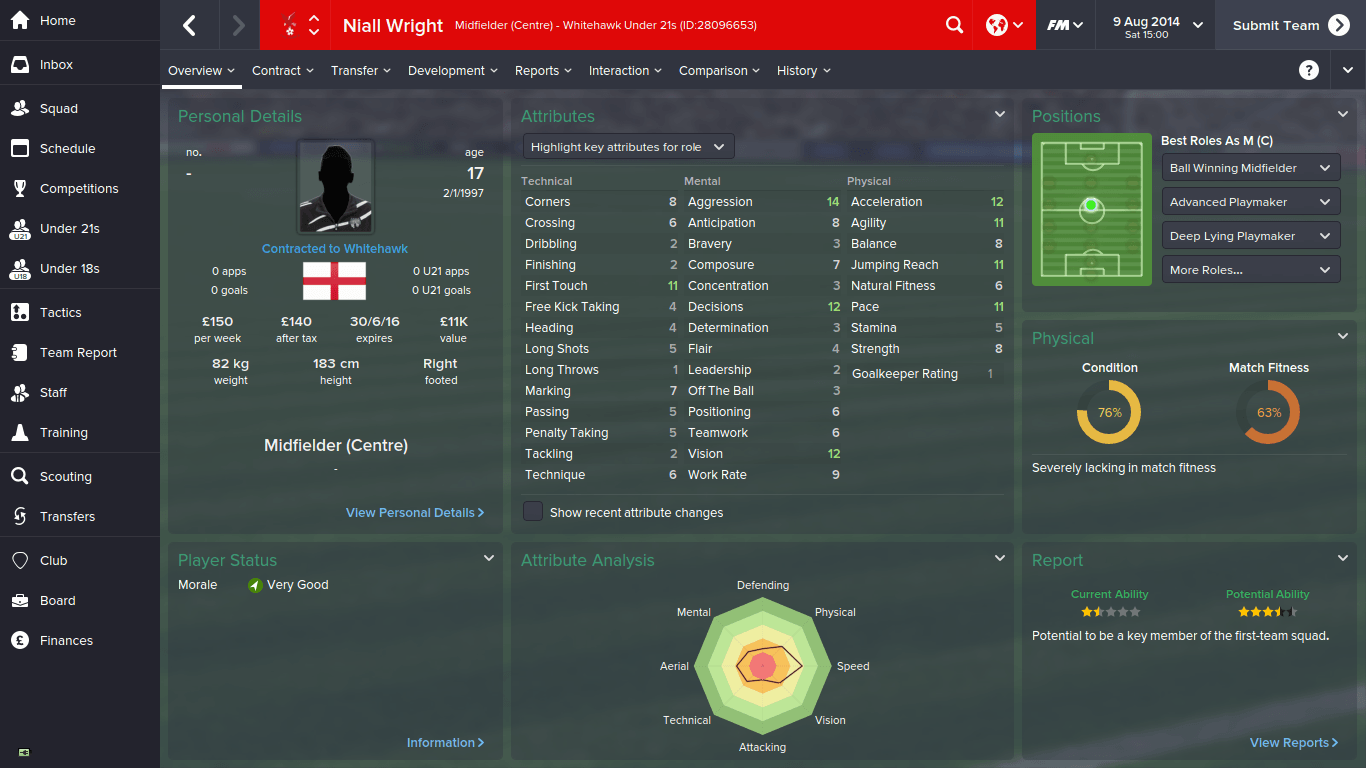 Nigel Seidu was our sixth and final signing of the pre-season. With Mohammed Ali illegible for at least the next four months, it was important that we brought in a right-back who could make a considerable contribution to our efforts this season. The German-Congolese right-back possesses a fair amount of stamina, and is a great team player with a good work rate. As all German players do, Seidu has good technique and is a decent tackler of the ball. He will be an important player in our defence, until Mohammed Ali returns to availability, if he does return to availability.
Fee: Free Transfer
Value For Money: We play six games in our opening month of the season. Our opening game is at home against Staines, who are a team looking to finish in the top half of the table. Two tough away trips to Bromley and Hemel Hempstead follow, before we clash with fellow title challengers Ebbsfleet at home, where the winner will gain a crucial win so early in the season. We close the month with a trip to Hayes & Yeading before hosting Farnborough. If all goes well, we can come out of this month with 11 points or more. That is my target for these six games and any more than that will be a significant bonus. Hopefully we can perform well enough to achieve this target, which may seem high to some but for me, I know that it is within our capabilities. After all, I am Prince William Mountbatten-Windsor, the heir to the throne of England.

pompeyblue
7 years
A good pre-season and some good signings too, Niko.
Really neat update as always, I'm thoroughly enjoying this story...but I knew I would

Ziechael
7 years
Awesome round up as we've come to expect. Looking forward to the season getting underway properly, can the monarchy embarrass itself any more than Prince Philip already does??

ps. Phil as official spokesman for future european matches would be awesome