Tbh, my favourite is the Argentinian one
Login to Quote


Tbh, my favourite is the Argentinian one


You can see why
Login to Quote


Tbh, my favourite is the Argentinian one


You can see why

AC Milan have confirmed they have completed the signings of two more youngsters, who will both join when the transfer window opens at the end of the current season. The two players are French striker Neils Vleminckx from Manchester United, and Reiner Zetlmeisel, a German defender from Bayern Munich.

Vleminckx is a player familiar to Lothar Matthaus, as he was the one who signed the striker for Manchester United just this January, from Stade Rennais. He joined the Reds for £2.5m, and they have now made a healthy £4.5m profit on him, after Milan purchased him for £7m. Vleminckx has netted 4 goals for the Manchester team this season, an impressive total for someone who is just 15 years old. He became the youngest player and scorer in both the Barclays Premier League and The FA Cup, meaning Matthaus has leapt at the chance to bring him to the San Siro. 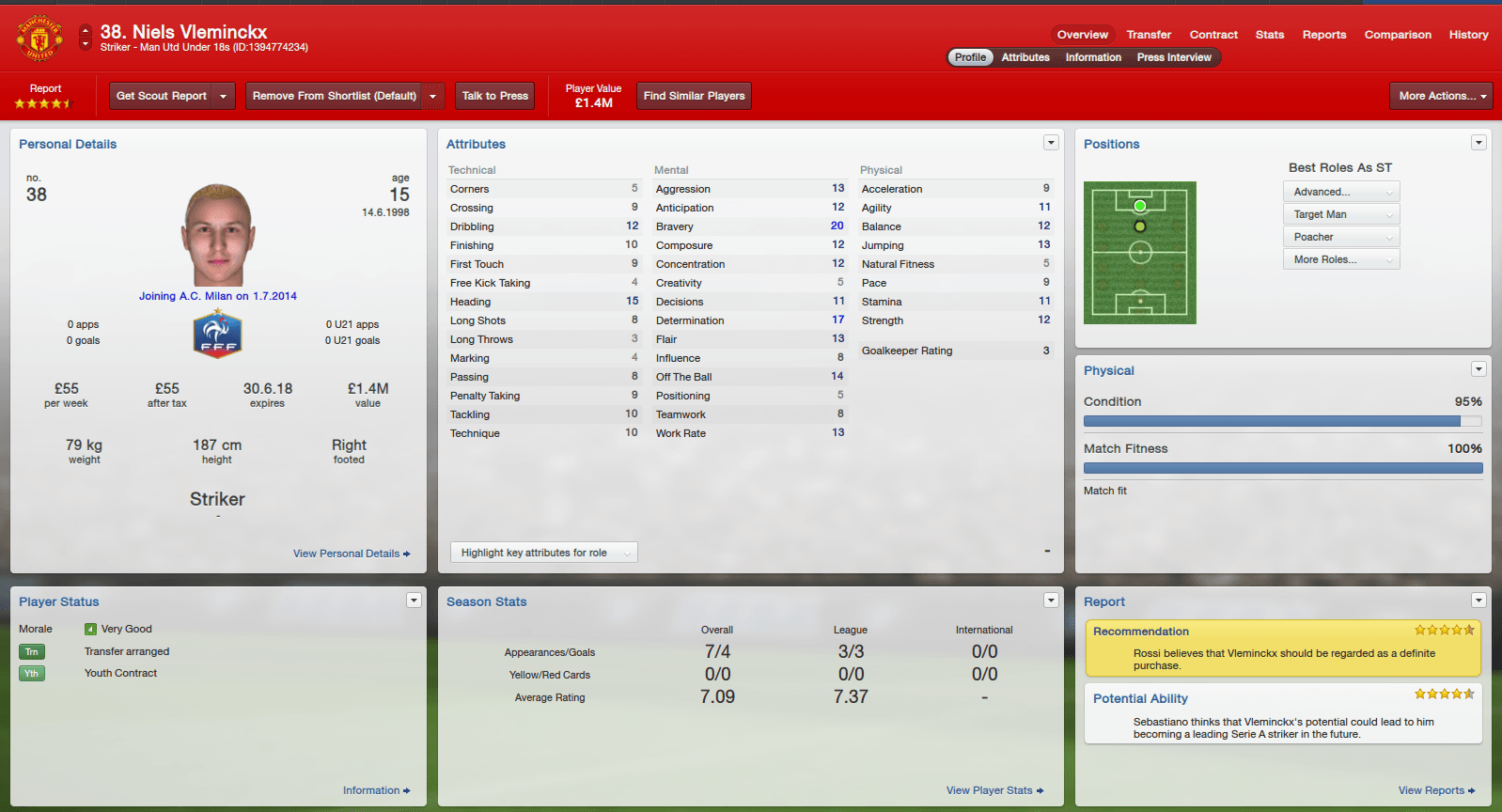 Reiner Zetlmeisel is a name less well-known to football fans outside Germany. The defender joined Bayern's second team last year, and got promoted to the first team after eye-catching performances, but only on a youth contract, meaning AC Milan were able to nip in and sign the youngster, for £550k of compensation. Zetlmeisel is yet to make his debut for the German giants, but Milan fans will be hoping to see him shine at the San Siro. The 15-year-old will be on £4.4k p/w until the summer of 2018. 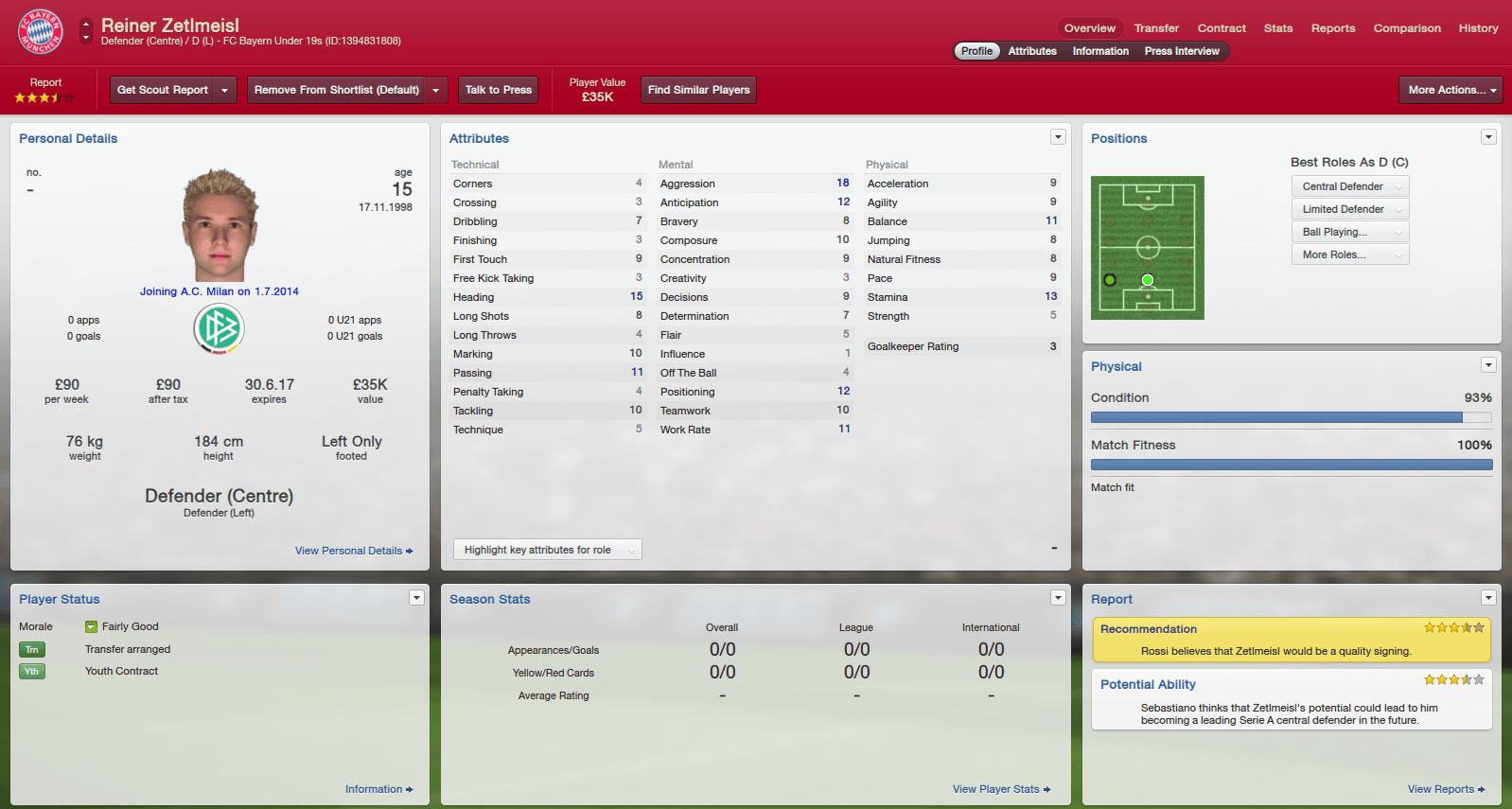 Since joining AC Milan last month, Matthaus has made a point of signing good youngsters, signing five since he joined. Critics are claiming he is overpaying, but if they all turn out the way he expects, the critics who slammed Matthaus will be embarrassed.
Login to Quote

BeanyUnited
8 years
Hopefully the youngsters turn out as expected! If so then that will be quality!

I know they will be quality players for Milan

Glenn T
8 years
Why do your regens all have funny names?

Blue
8 years
Thanks you four, I'm hoping they all will be in the end!

Well, to them, you must have a funny name

The youth intake selection day has been and gone, and all of the worthwhile youth candidates have been offered contracts. This year wasn't the best, but with the young players we've signed recently, it doesn't matter so much. 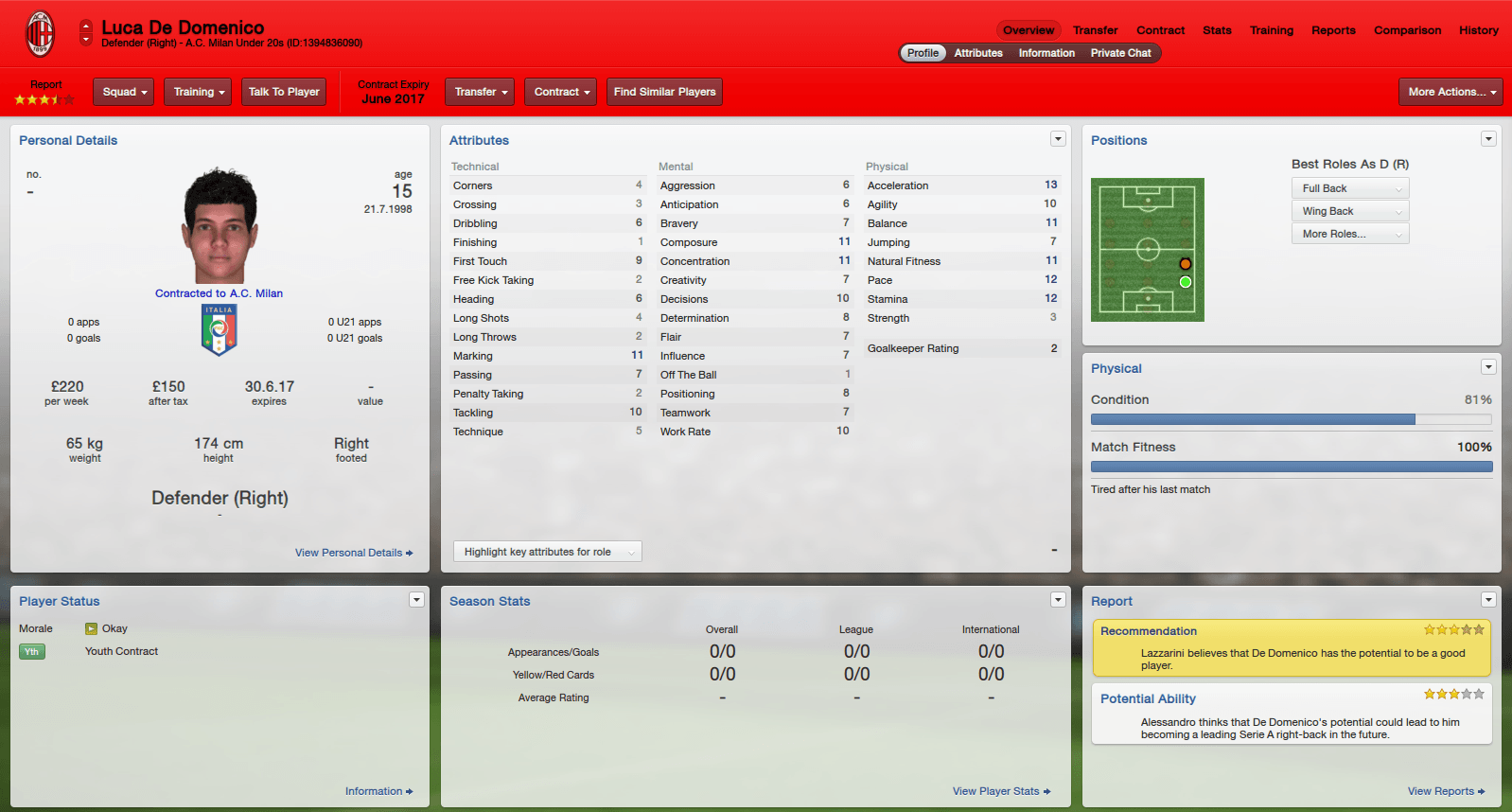 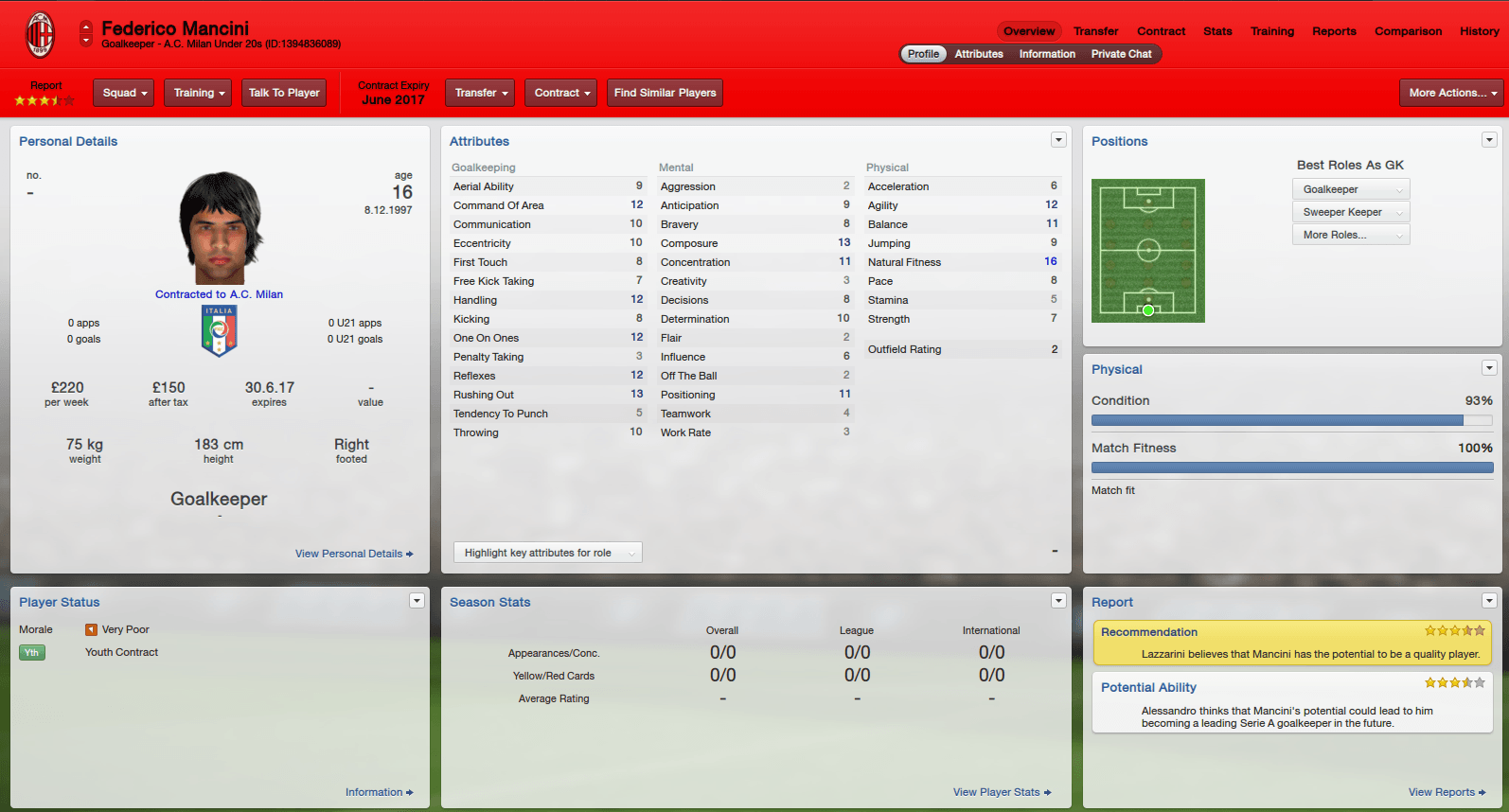 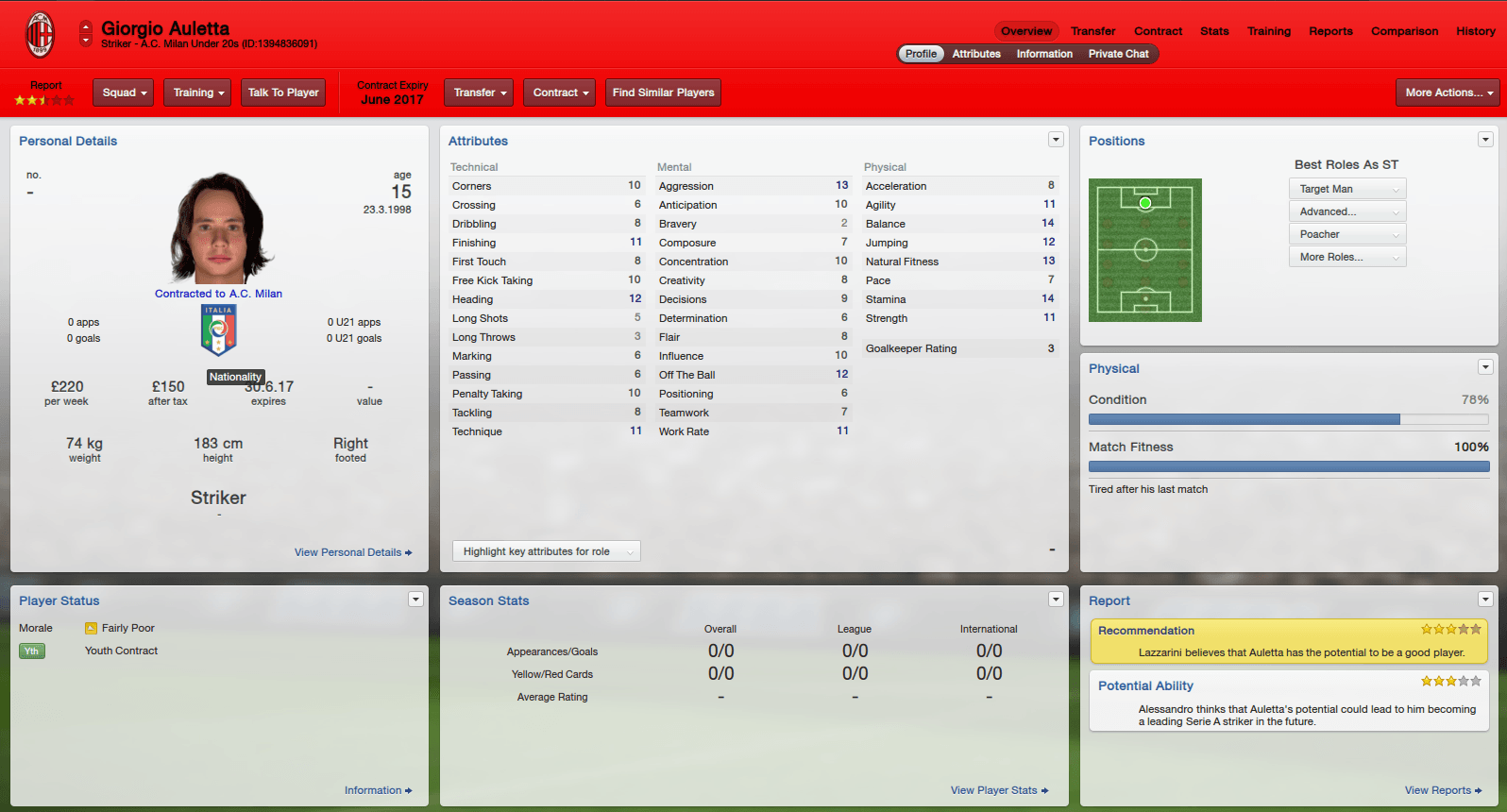 Jamesg237
8 years
You seem to be definitely going for a youthful team - can work sometimes. Plan on playing your new young signings much or will they be in the reserve team or on loan?
Login to Quote

Blue
8 years
I reckon they'll get a lot of gametime once they arrive tbh, especially the three from the other update.
Login to Quote

*cough* look at the potential *cough*

Blue
8 years
Guys, you may already know this, but that Argentinian regen I signed has a PA of 198. That is the best I've ever had. So, I have decided, if he wins the Balon D'Or, I will have this printed: 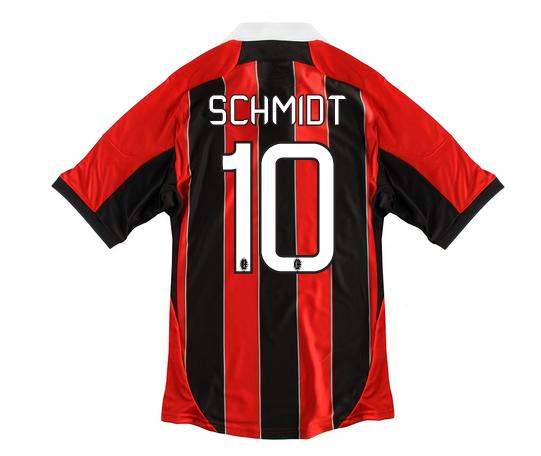 Tell me what you think