Louis O.
7 years
Great results, unlucky with the Capital One Cup but congraulations on the FA Cup.

Aston Villa manager David Beckham has been awarded a new contract on £76,000 per week, seeing him earn £25,000 more than his previous existing contract of £51,000 per week. 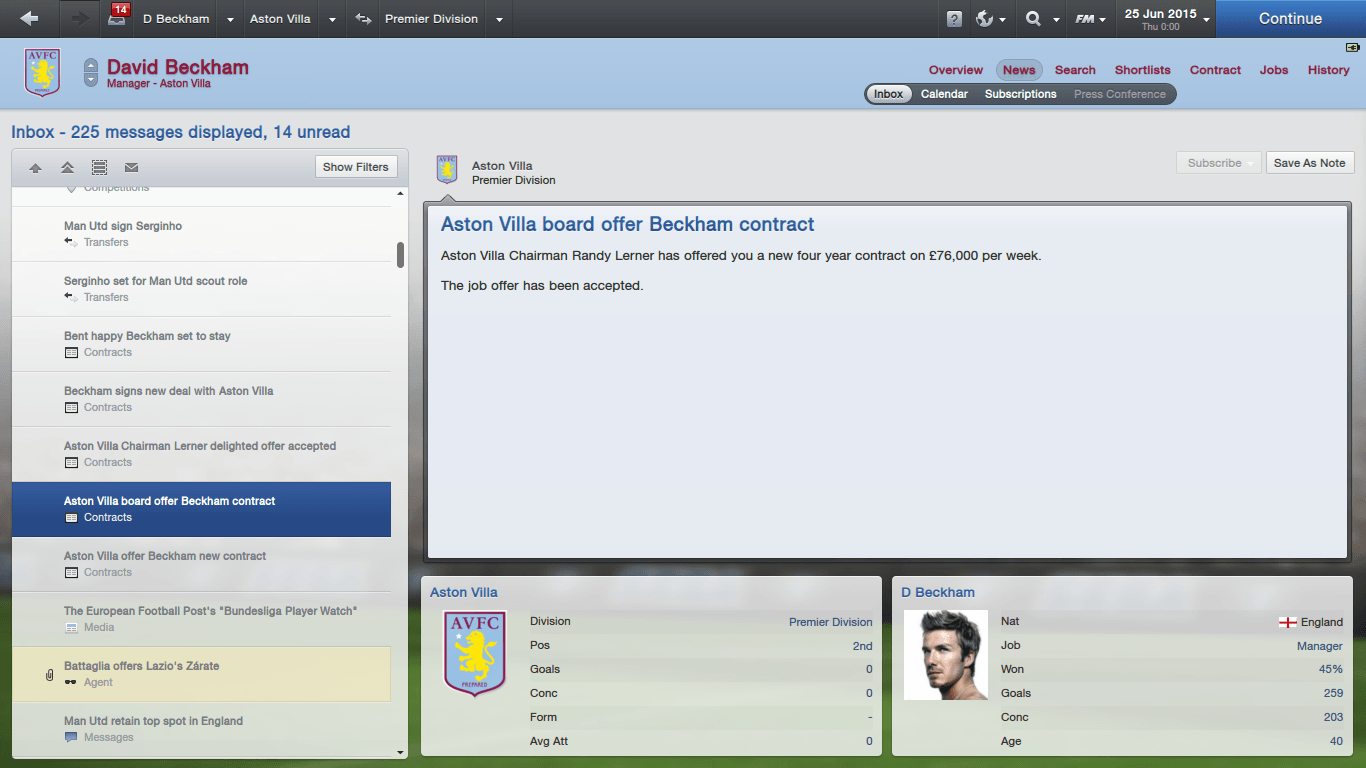 Beckham's previous contract ran until 2017 but his new one will only expire in 2019.

The contract was offered in the face of interest for Beckham's managerial services from Chelsea and Juventus. The Blues sacked Mexican boss Javier Aguirre at the end of the season after finishing in 6th place, while Juve boss Antonio Conte left after a successful season to take the job at Bayern Munich.

"I am very happy to have signed a new contract," said Beckham. "The board has really shown how they appreciate me and in return I hope I can lead our squad to a successful season this year."

Chairman Randy Lerner has also revealed his delight at Beckham's acceptance of the contract.

"David really loves Aston Villa and he's shown it by signing that contract. I'm delighted he's signed. I really think he can be the one to take our club to better heights."

Striker Christian Benteke has also admitted that the entire squad is happy with the announcement.

"For a lot of us, David is the best manager we've played under so we are looking forward to working with him for 4 more years and winning more trophies."
Login to Quote 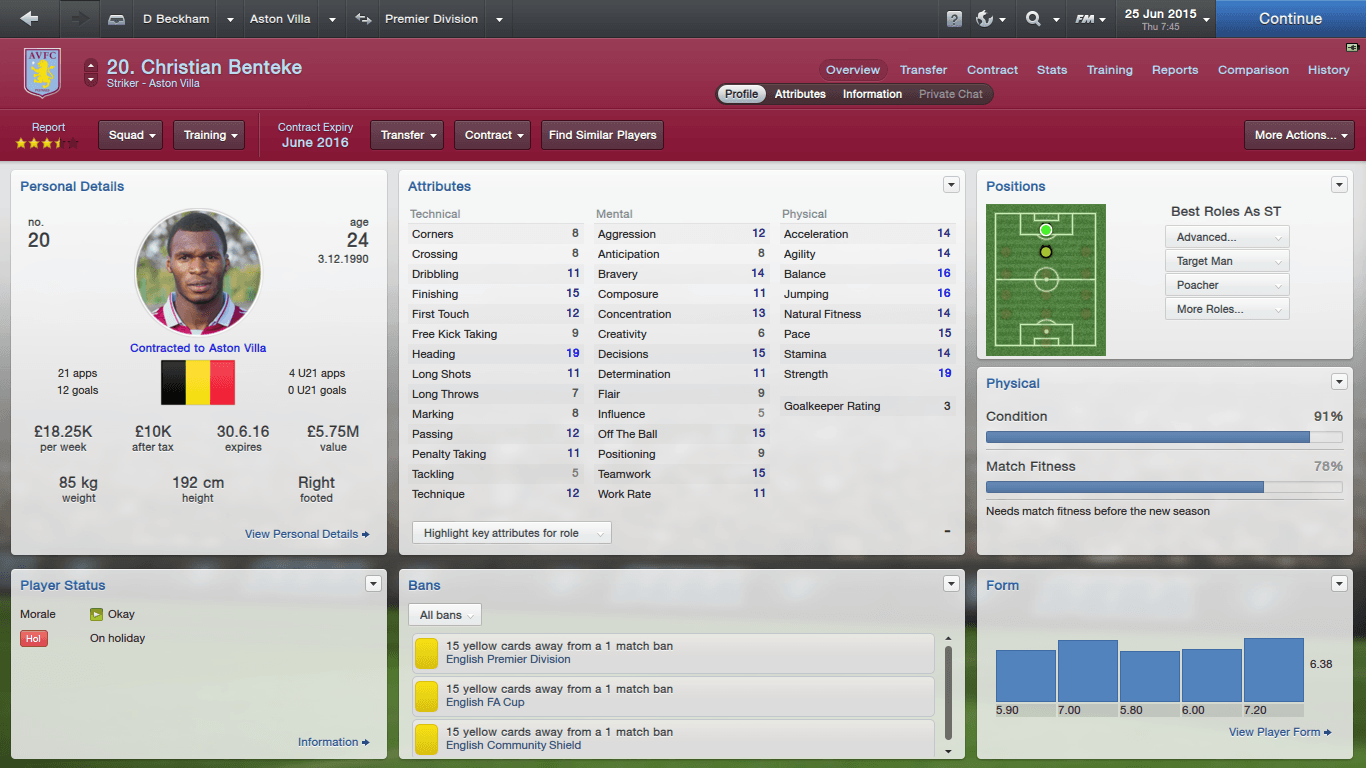 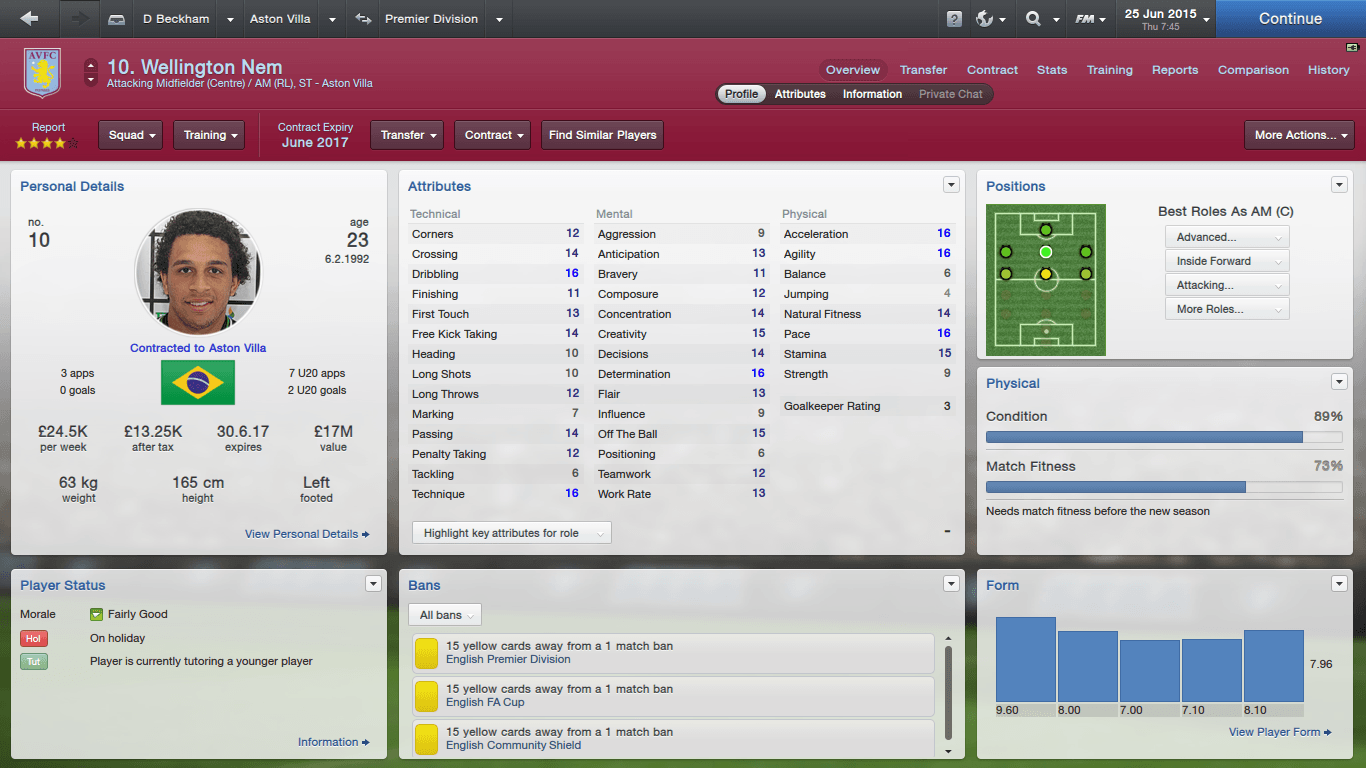 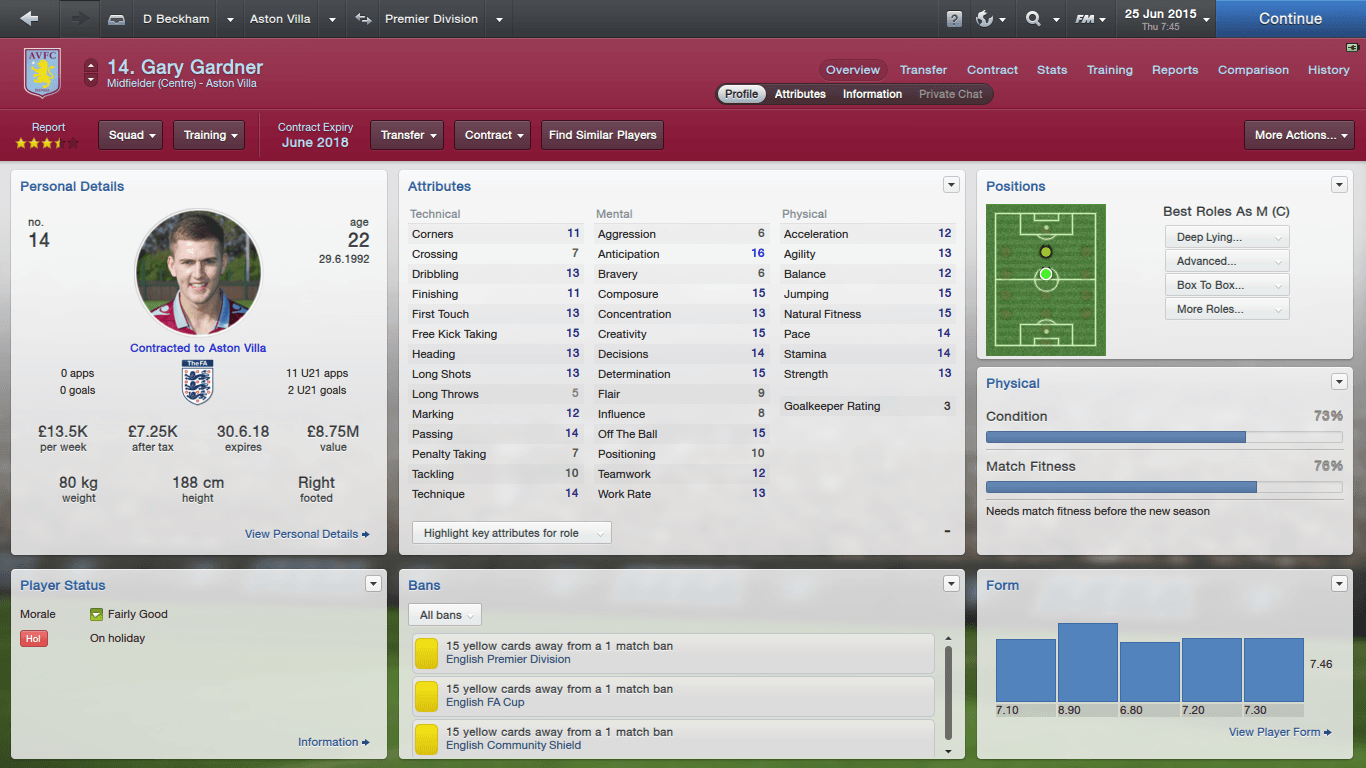 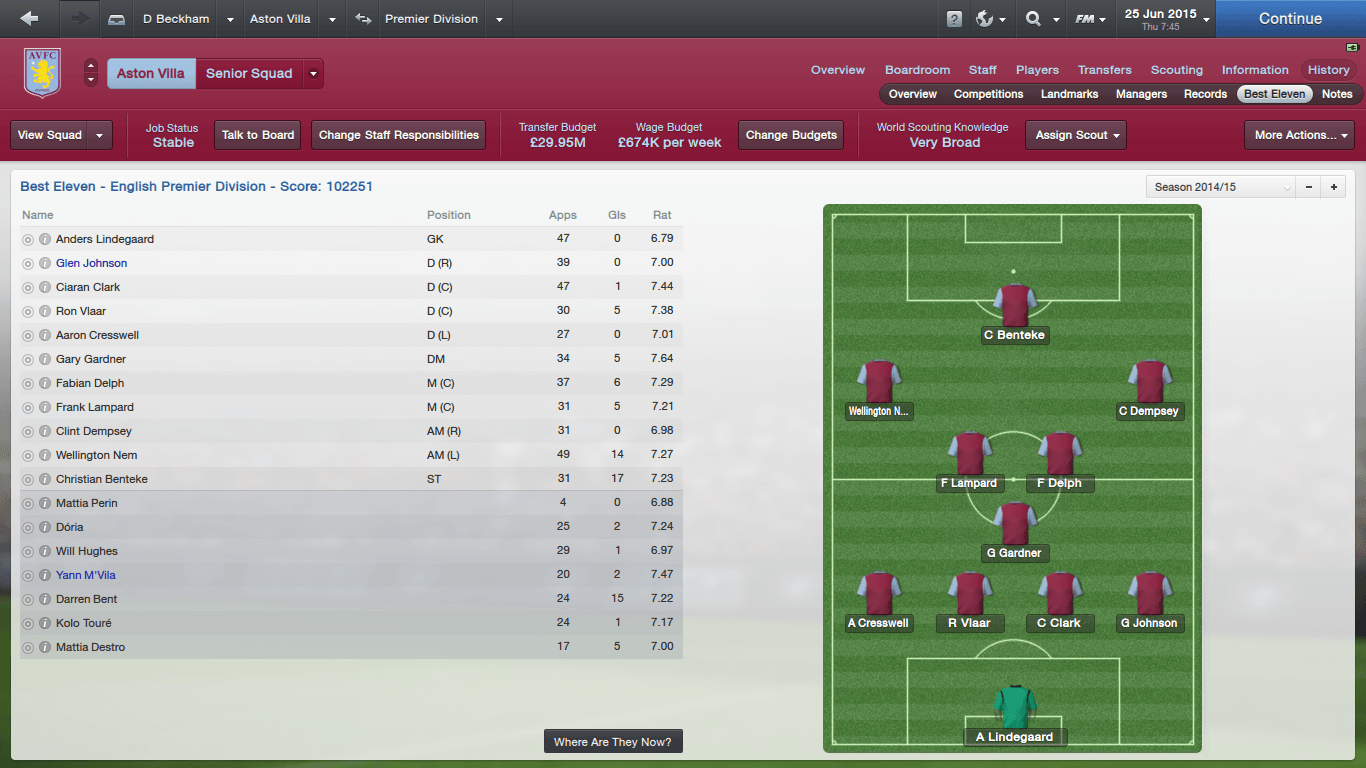 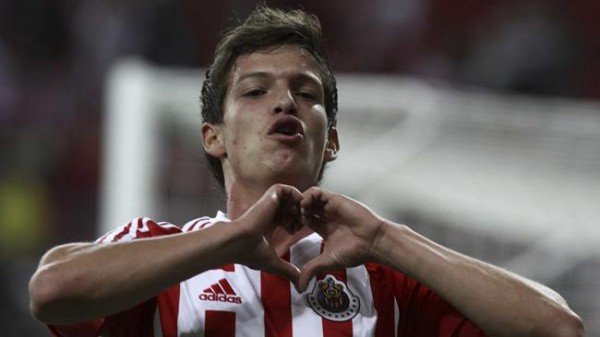 Liverpool full-back Glen Johnson and Chelsea defensive midfielder Yann M'Vila has departed Aston Villa after their fairly successful loan spells. However David Beckham has worked to bring in more signings to strengthen the squad ahead of their season, which will include competing in the Europa League.

The first one up, and most prominent of the four new arrivals, is Mexican striker Carlos Fierro, who attracted interest from several respectable European clubs after forcing his way into the Chivas first team last season and scoring an impressive tally of 28 goals in 37 appearances. Already having 4 international caps for Mexico, Fierro is tipped to be better than current Mexican sensation Javier Hernandez and will be an Aston Villa player for a fee of 9.75 million - at first glance, not a small sum, but Beckham is convinced he is worth it. 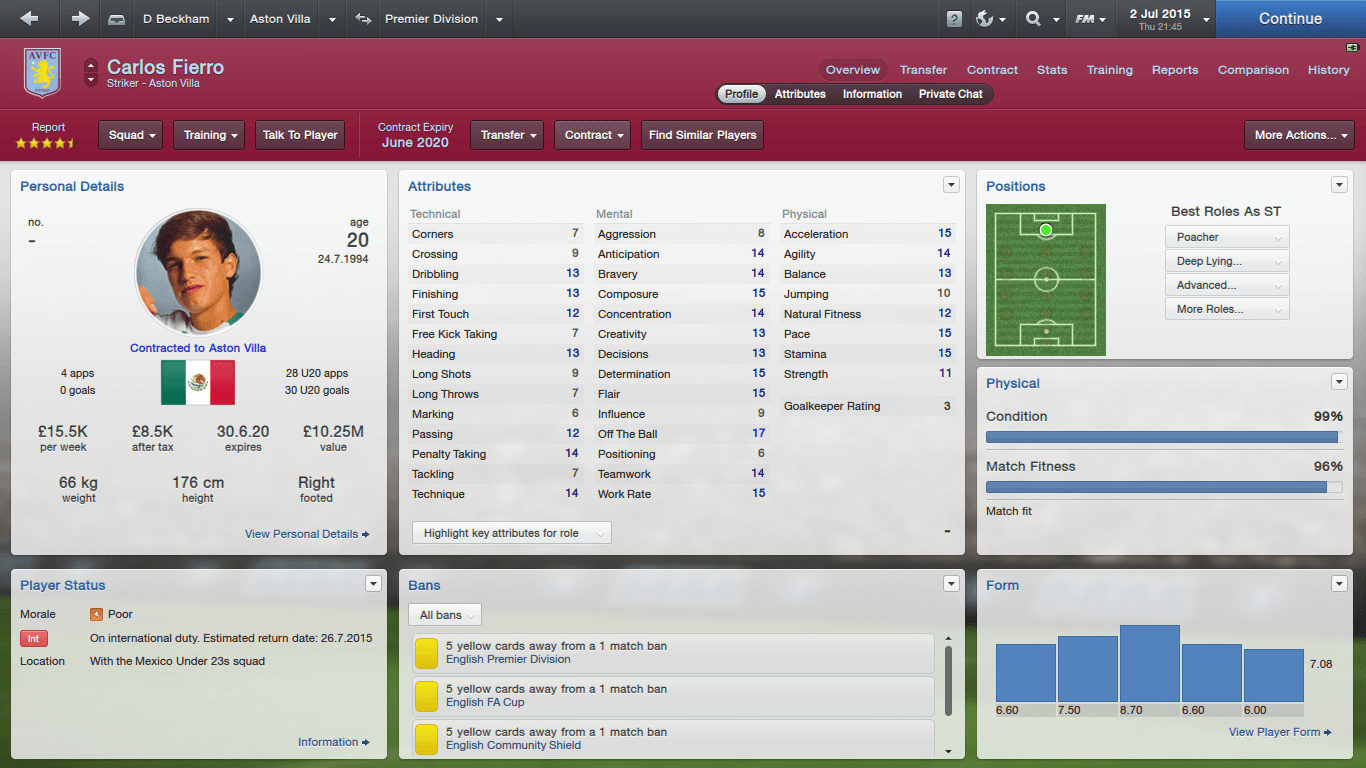 The next man is Milan youngster Hachim Mastour. Although tipped to be a first-team player in later years, the Italian giants have allowed him to leave for England and Aston Villa for a fee of 2.2 million after the Villans showed interest in the 17-year-old. 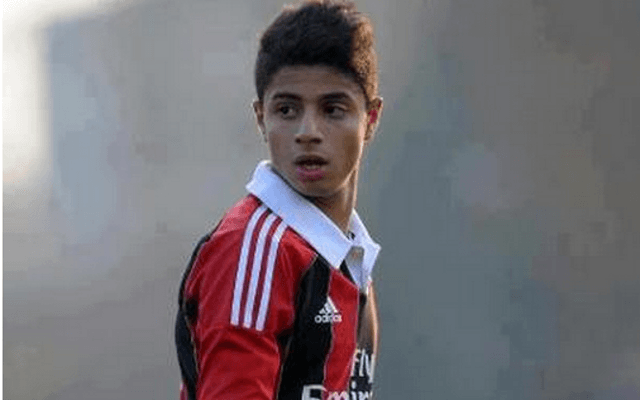 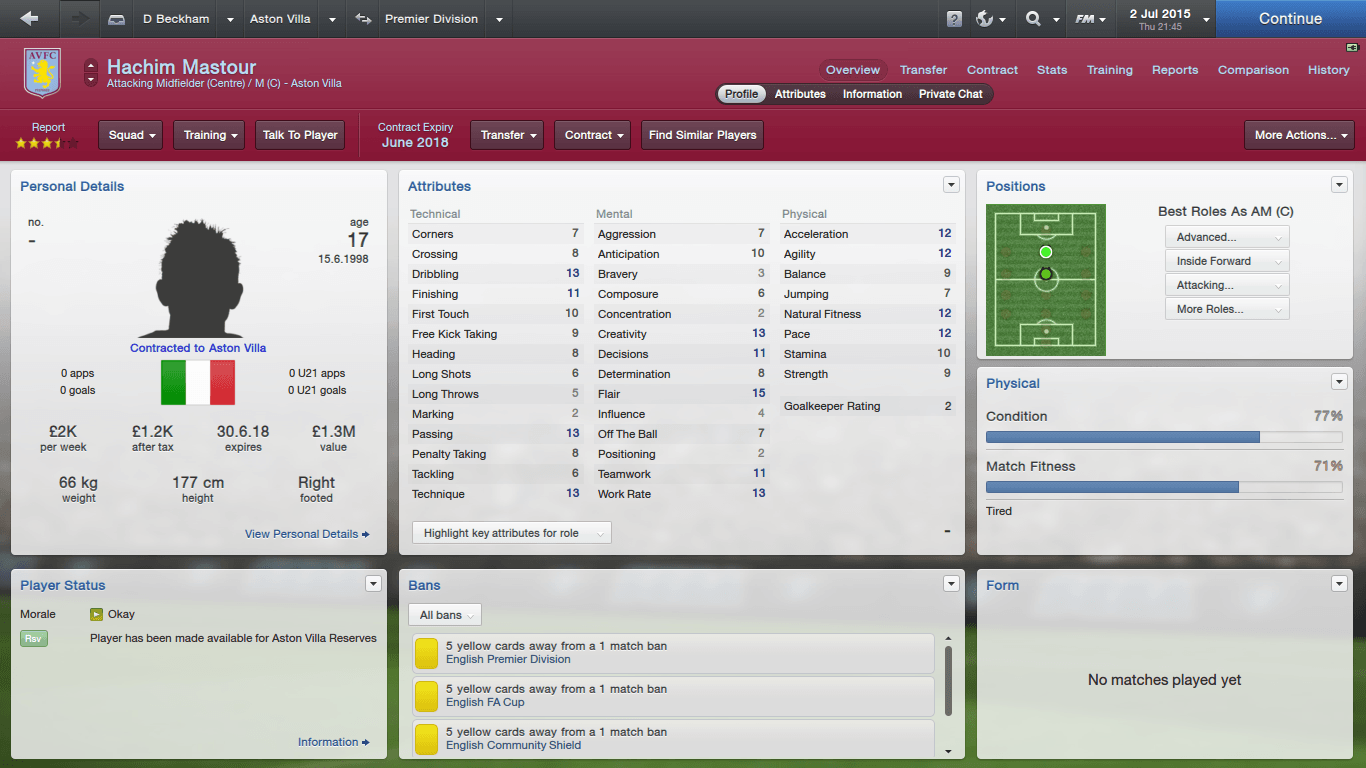 Daniel Montero has also joined Aston Villa for a 2 million fee, something Beckham describes as a bargain, and he may be right. The 18-year-old defender has amassed 23 Under-21 international caps for Uruguay and also made his senior debut for his country in a friendly match against Sweden last month. Tipped to be the next big thing in South America and Uruguay. 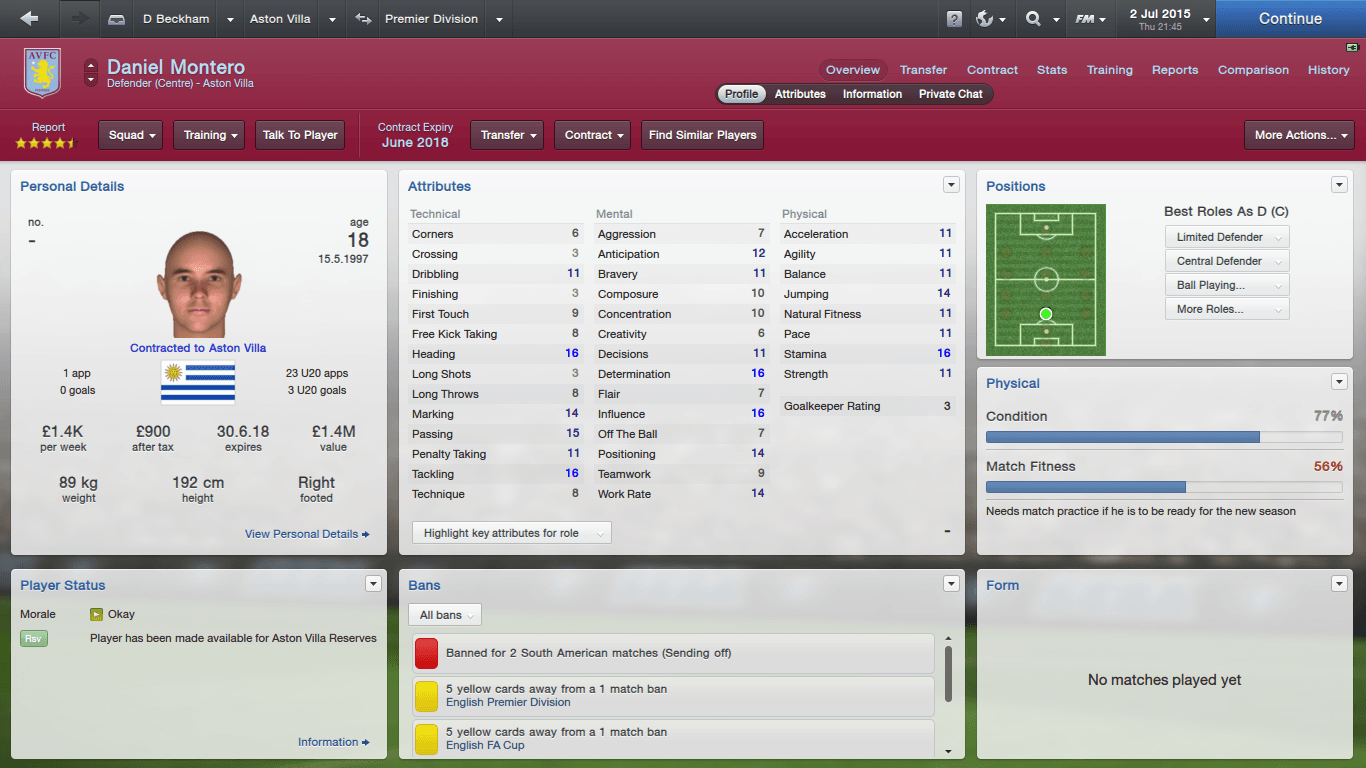 Although not as famous as Montero has been with his stunning displays in the Uruguayan league where he played for boyhood club Nacional, Paraguayan youngster Jesus Blanco joins Villa for 2.5 million and is already a national star back in his native Paraguay, having already won 4 international caps at the tender age of 18 and also emerging as a solid first-team player at former boyhood club Cerro Porteno. 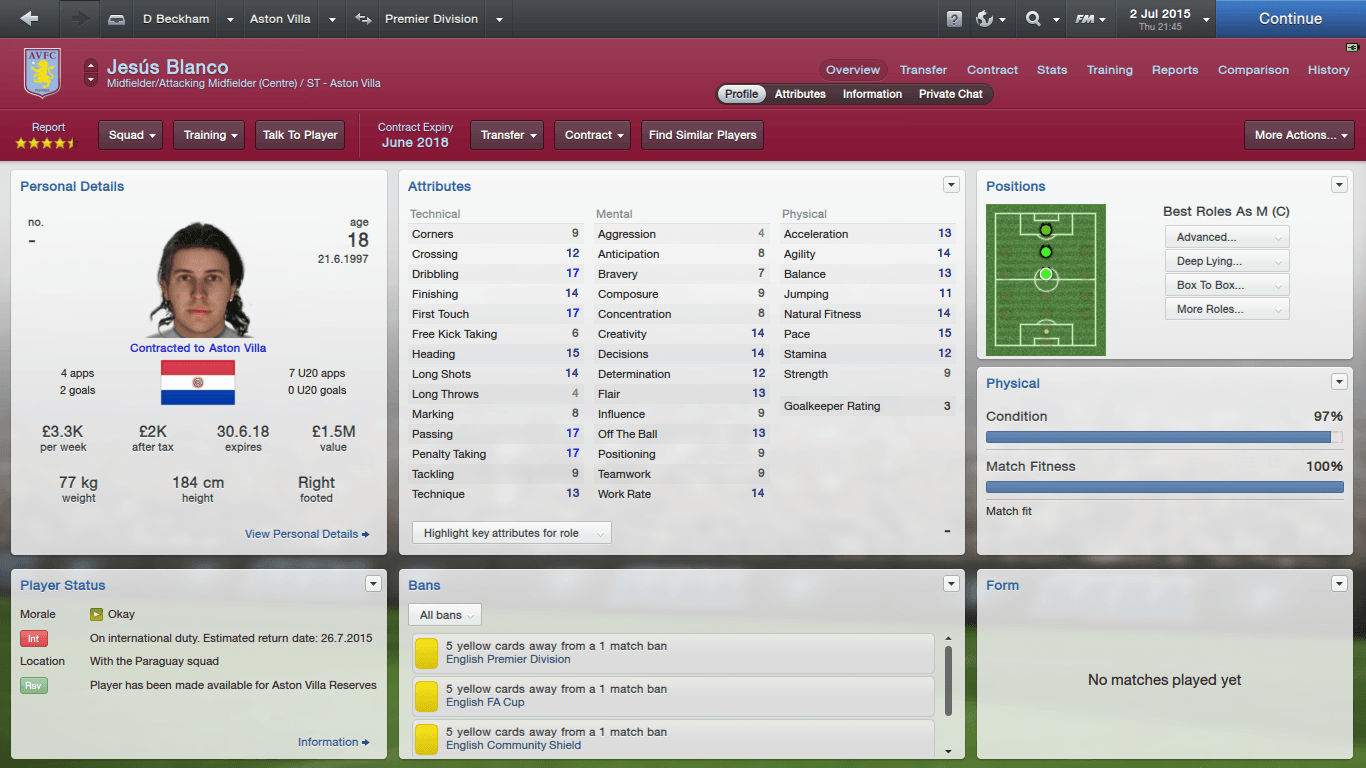 With all the youngsters coming through, it is indeed an exciting time for Aston Villa as Beckham adopts a method to build players from youth.

The former England captain has also hinted that he will be "looking to give the youngsters as much first-team chances as possible this season".
Login to Quote

Jer
7 years
Get a goalkeeper! You need one because Lindegaard doesn't know what a clean sheet is! I think it is time to sell Bent and get a new striker. If you ever want to get some cash for Bent, it is now.
Login to Quote

keep it up, I love the story.
Login to Quote

Ain't nobody got time for that
Login to Quote 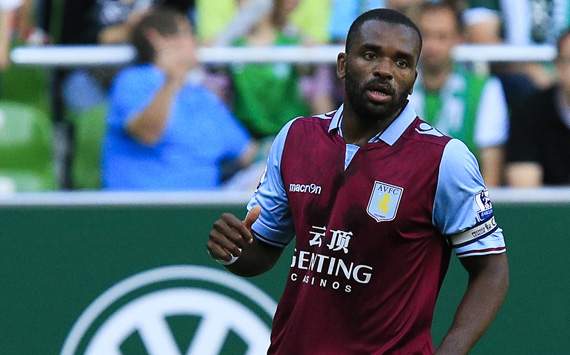 All have been allowed to leave the club for fees of 3 million each.

Cresswell departs for West Ham while Bent and Lindegaard will link up with each other again at Blackburn Rovers.

Lindegaard only joined from Manchester United at the start of last season but has been allowed to move on after conceding 52 goals in the 36 league appearances he made. Cresswell has also been sold after joining from Ipswich only two years ago. The full-back made exactly 50 appearances for the Villans.

However, Villa fans will be most unhappy with the allowance of Bent's departure. The English striker has become a solid fan favorite at Villa Park but an injury-tormented season right after a successful one where he scored 24 goals has prompted Beckham to sell the 31-year-old, who has also lost his spot in the England team. 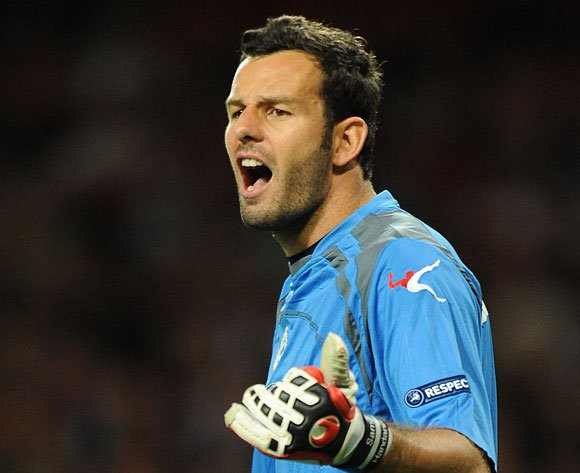 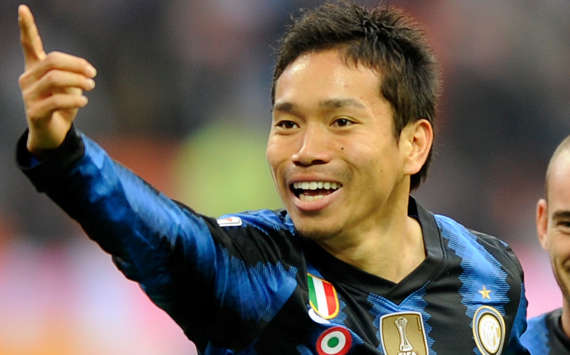 The first of them is Slovenian goalkeeper Samir Handanovic, who forced Udinese to release him at the end of his contract by refusing to sign an extension. His goalkeeping record at Internazionale between 2012 and 2015 has not been forgotten and clubs like Barcelona, Real Madrid and Manchester City rushed to acquire the signature of the 31-year-old. However, he has chosen playing time ahead of inflated salaries and will take over the reins as Aston Villa's new first-choice goalkeeper. 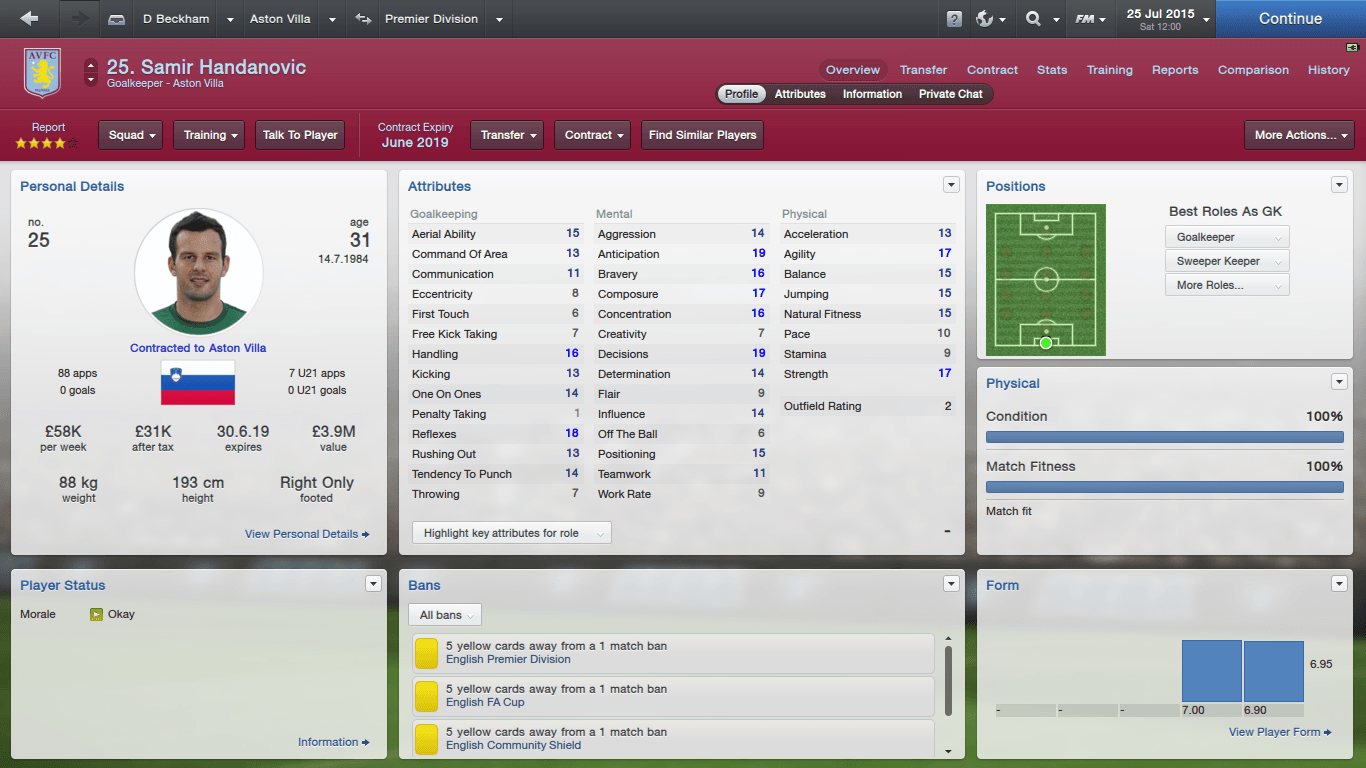 Another former Internazionale man, Japanese international Yuto Nagatomo comes for a fee of 10 million and will replace Aaron Cresswell as the first-choice at left-back. The 28-year-old has now become Aston Villa's first Asian player and is sure to boost the popularity of the Lions in Japan and Southeast Asia. 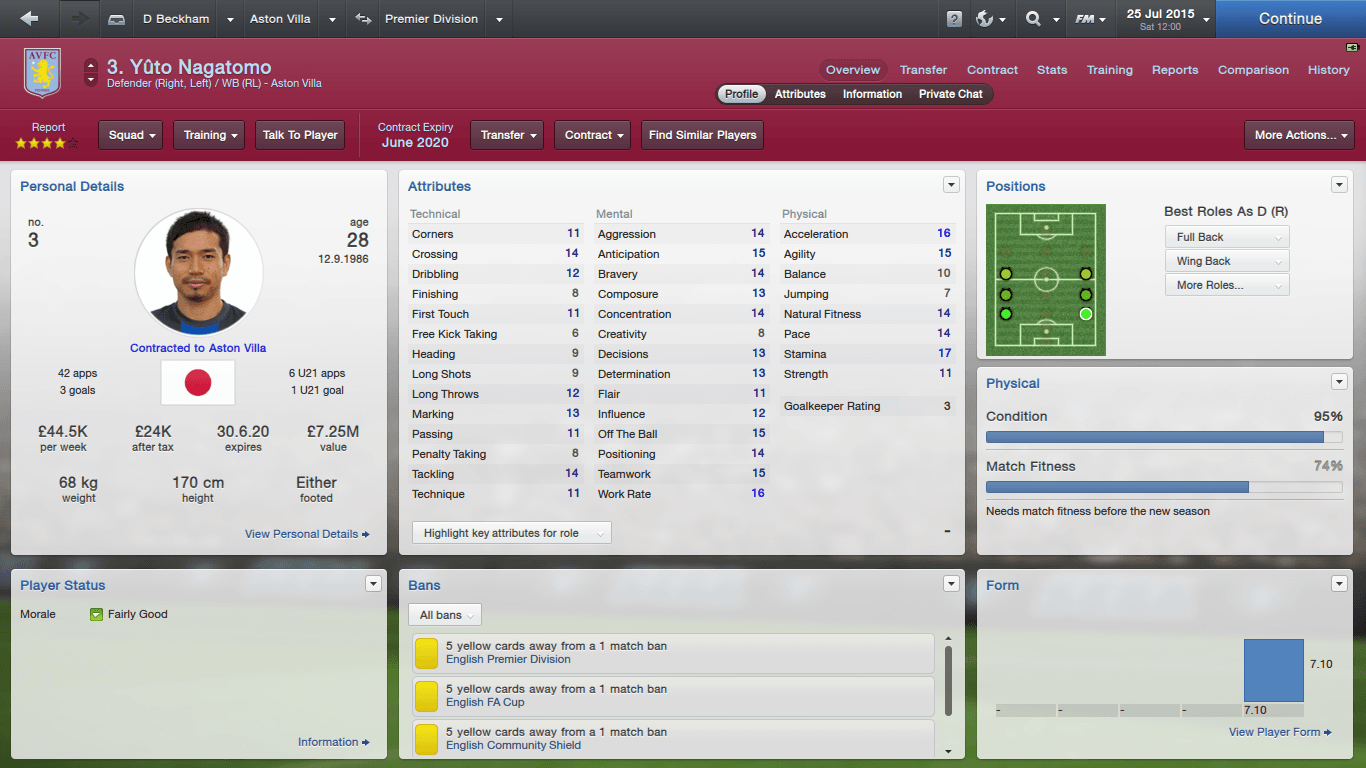 The last is 15-year-old Martin Legendre, a French full-back brought in from Olympique Lyonnais for 4 million. Although young, the coaches at Lyon rated him highly and he is definitely a teen to watch out for. 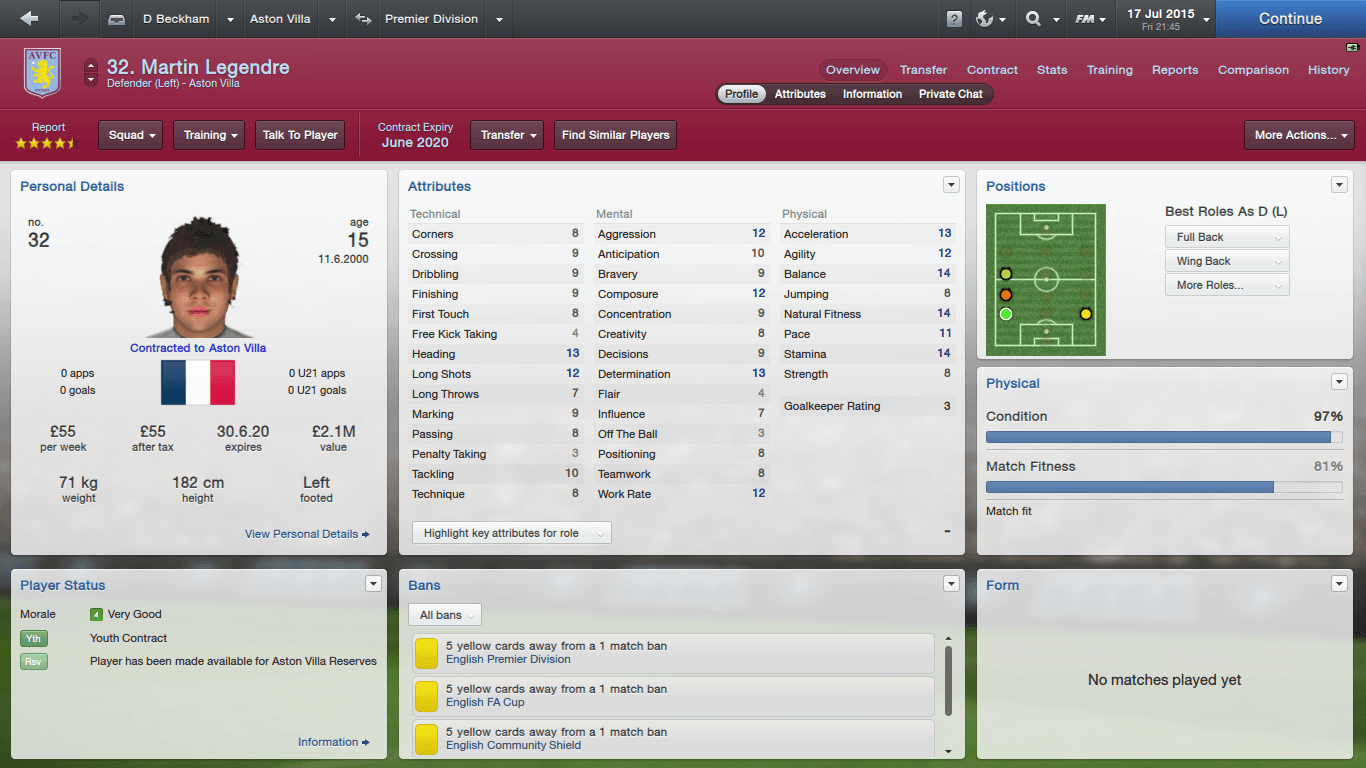