Bayern Munich had quite a hand in a number of awards with Ademilson winning the Bundesliga Golden Boot, Toni Kroos winning Midfielder of the Year, as well as David Beckham winning the prestigious Manager of the Year award. 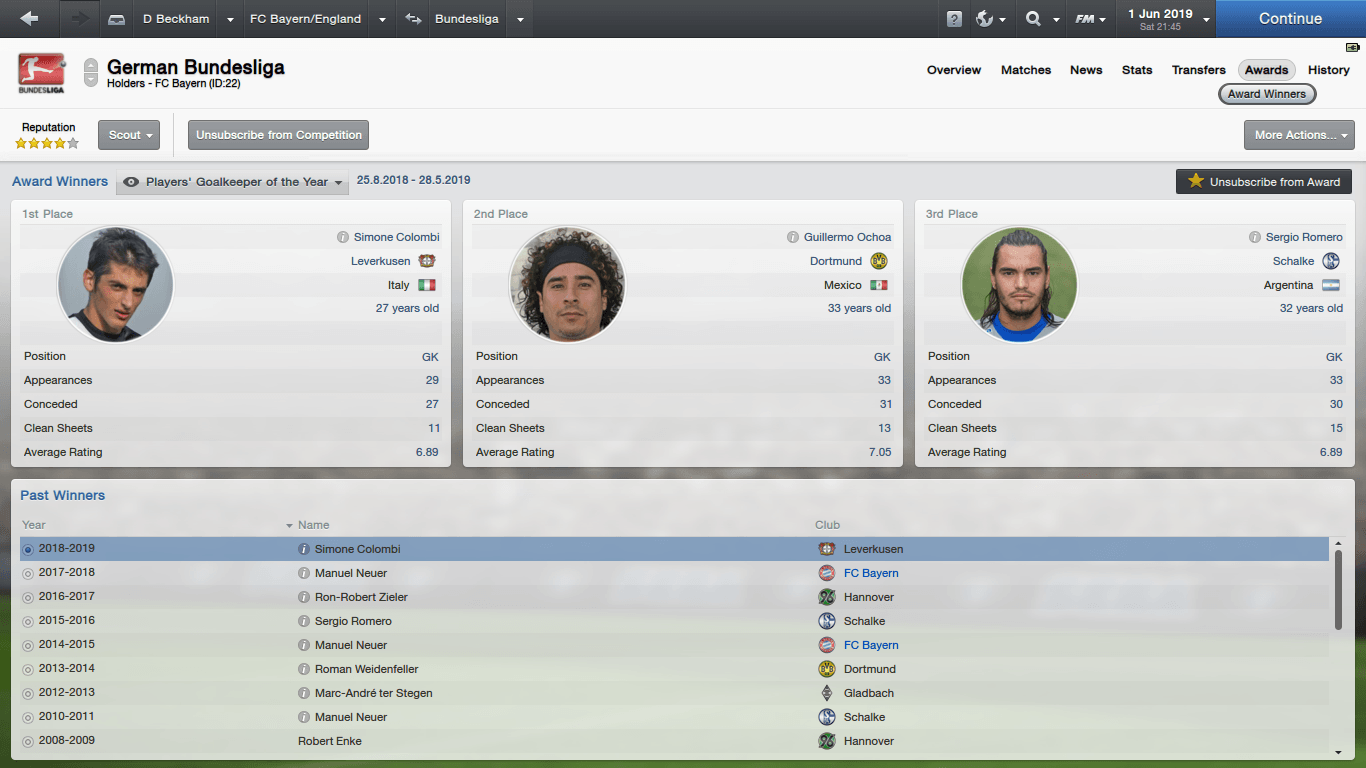 Defender of the Year Midfielder of the Year 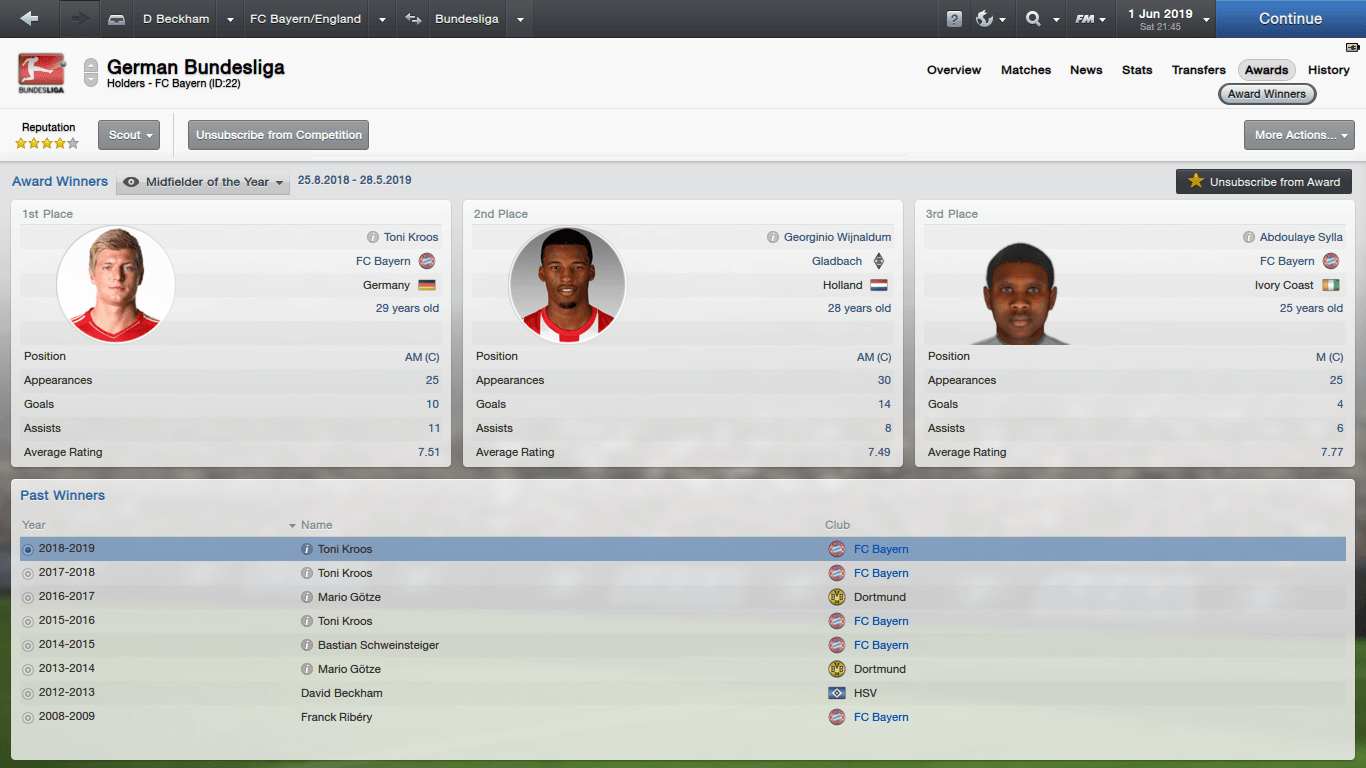 Striker of the Year 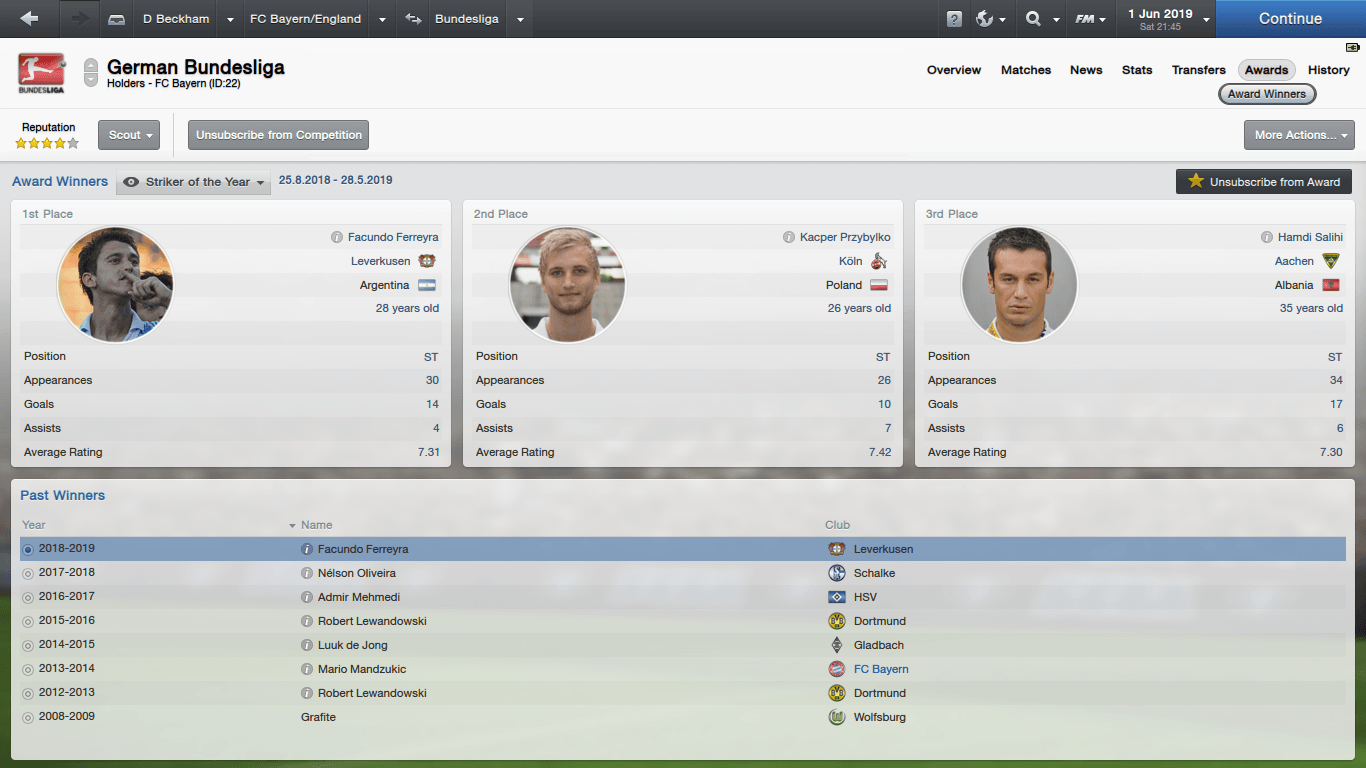 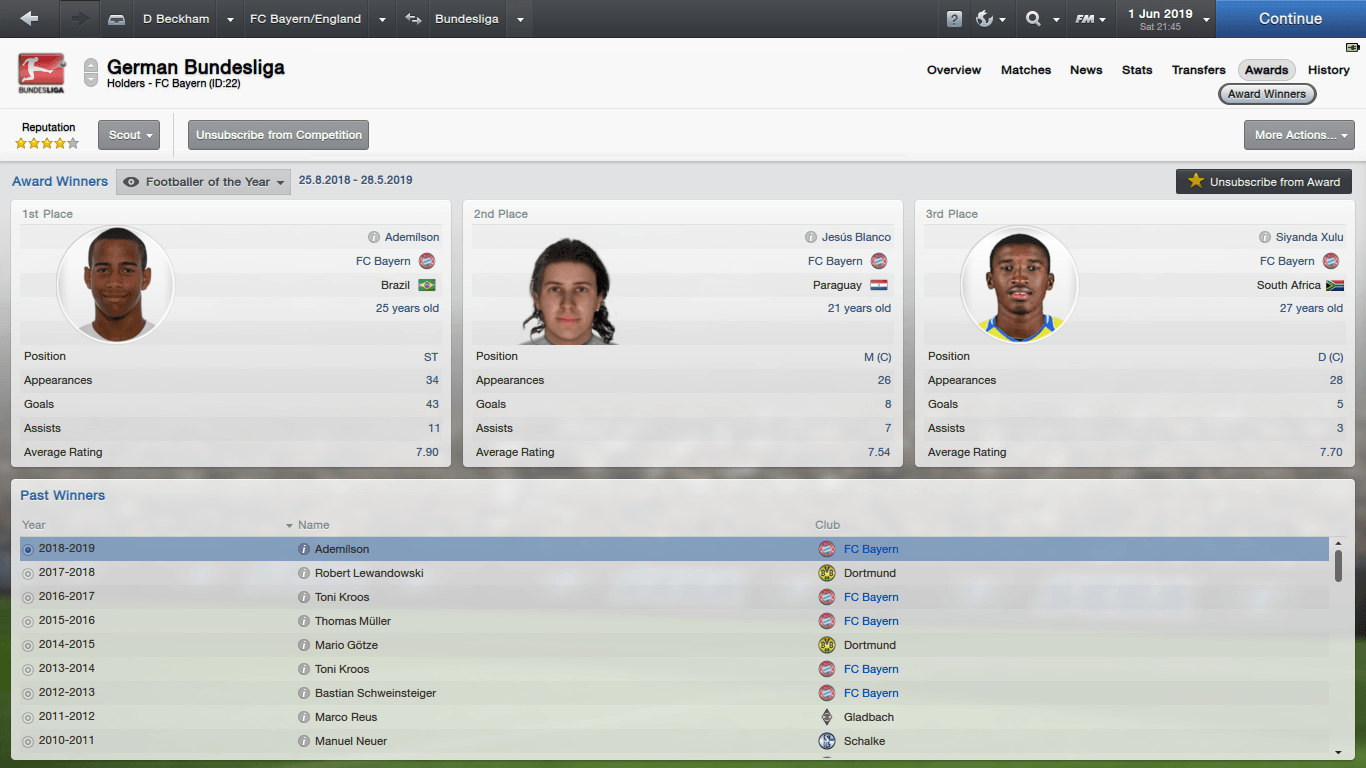 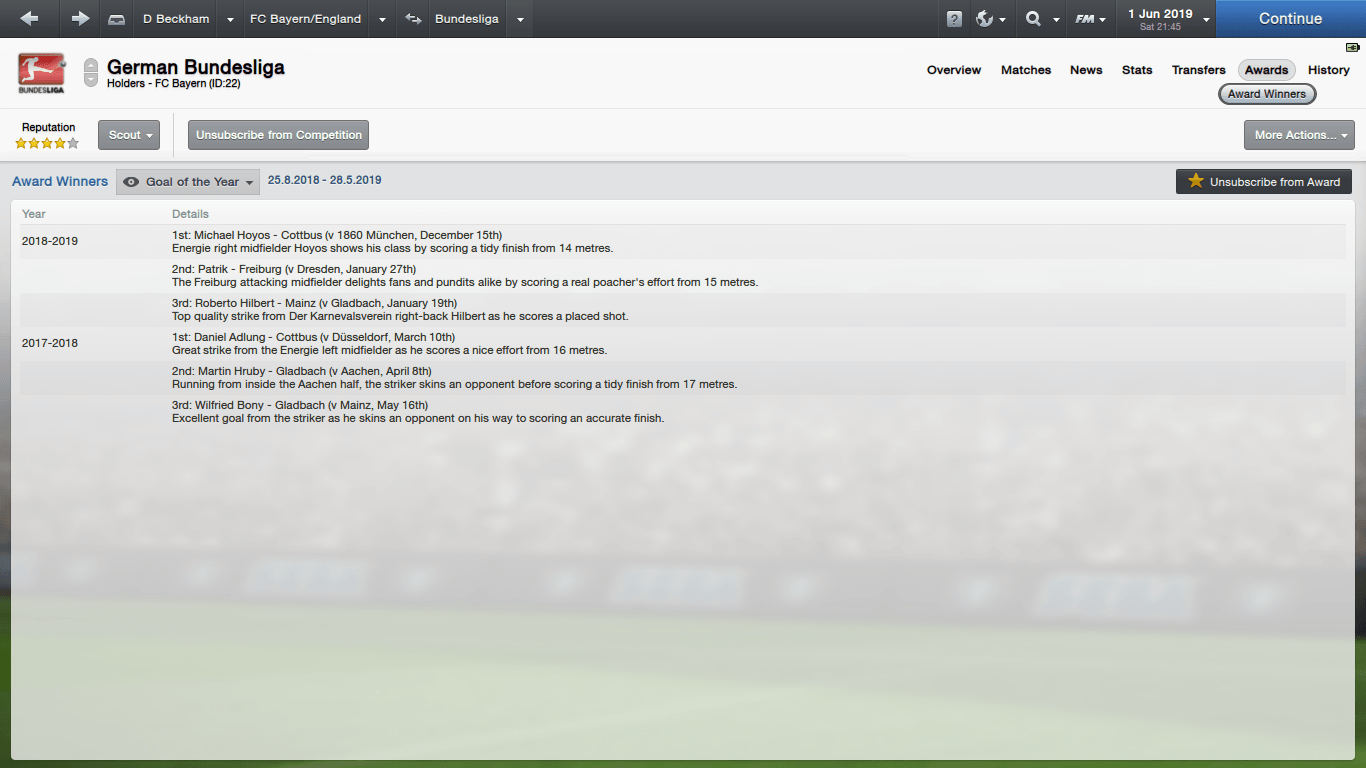 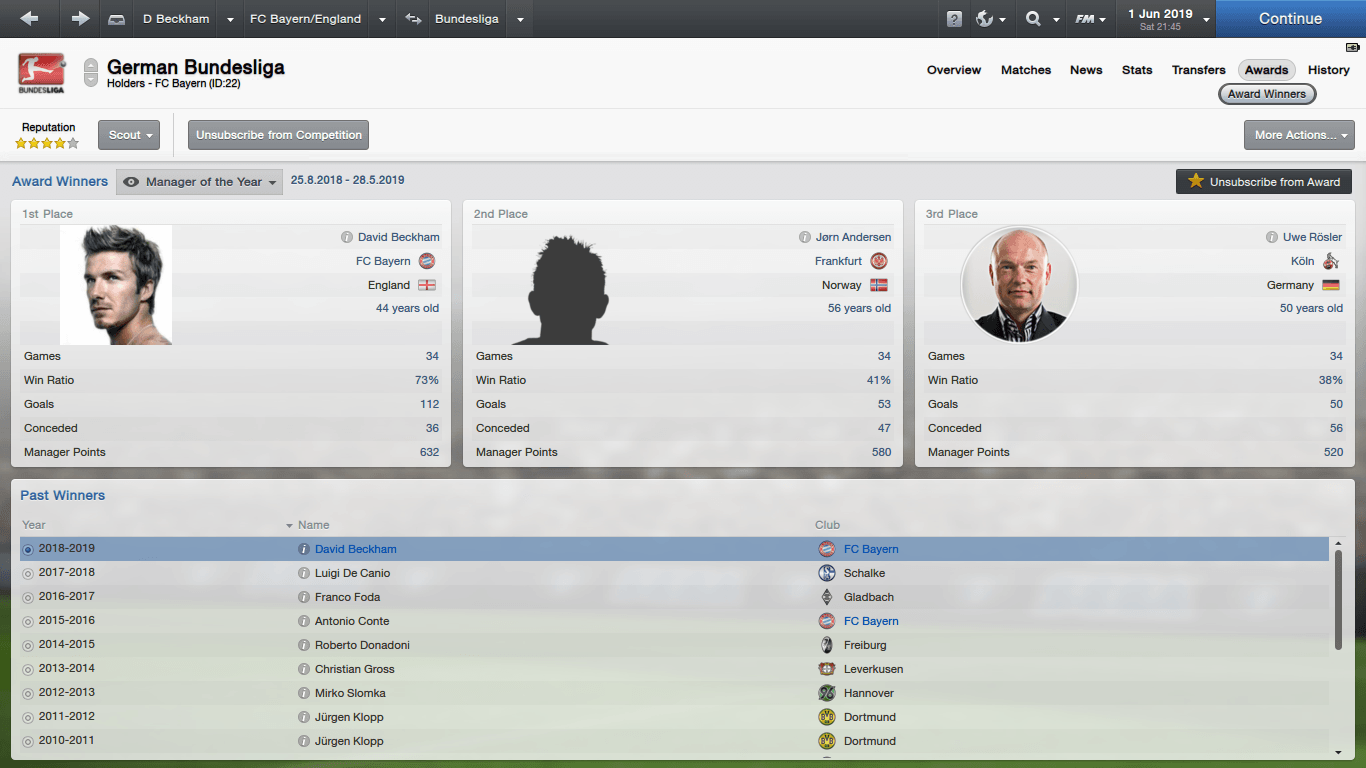 Players' Manager of the Year 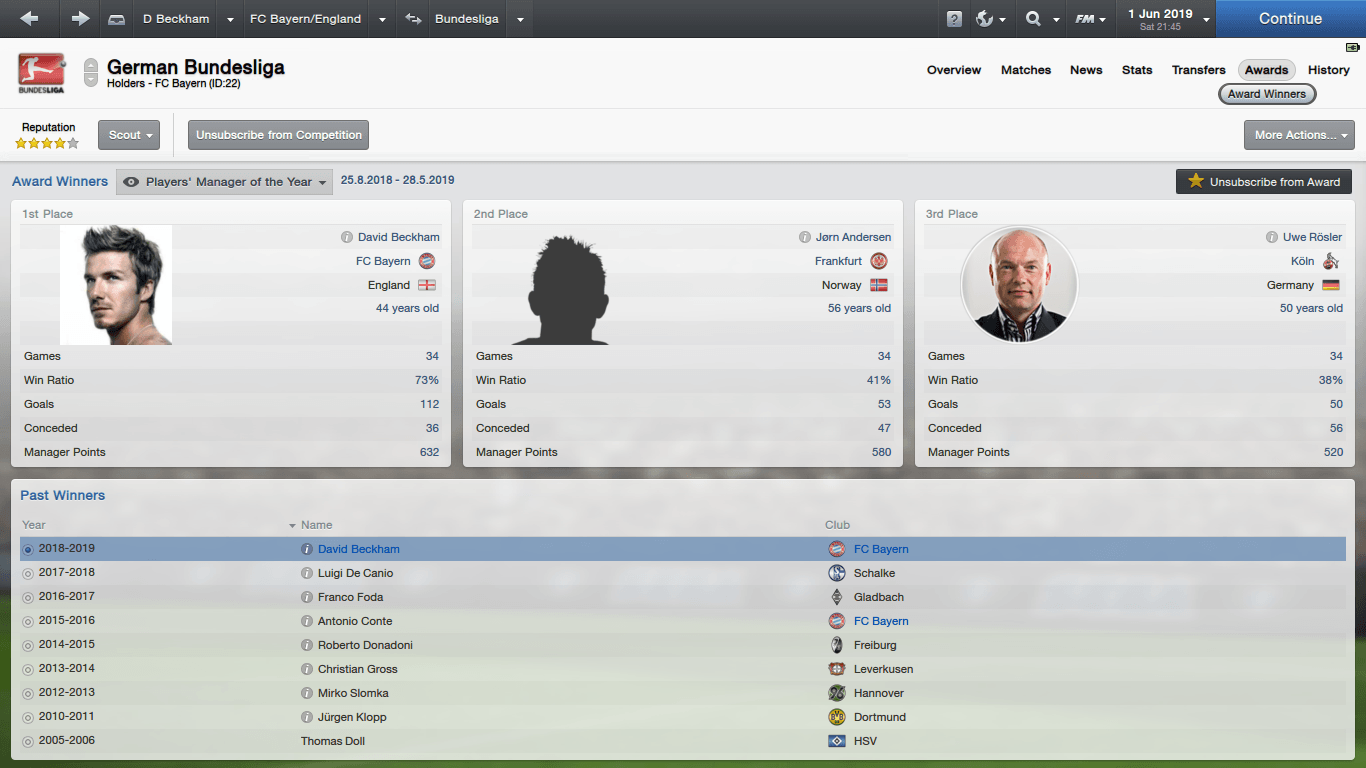 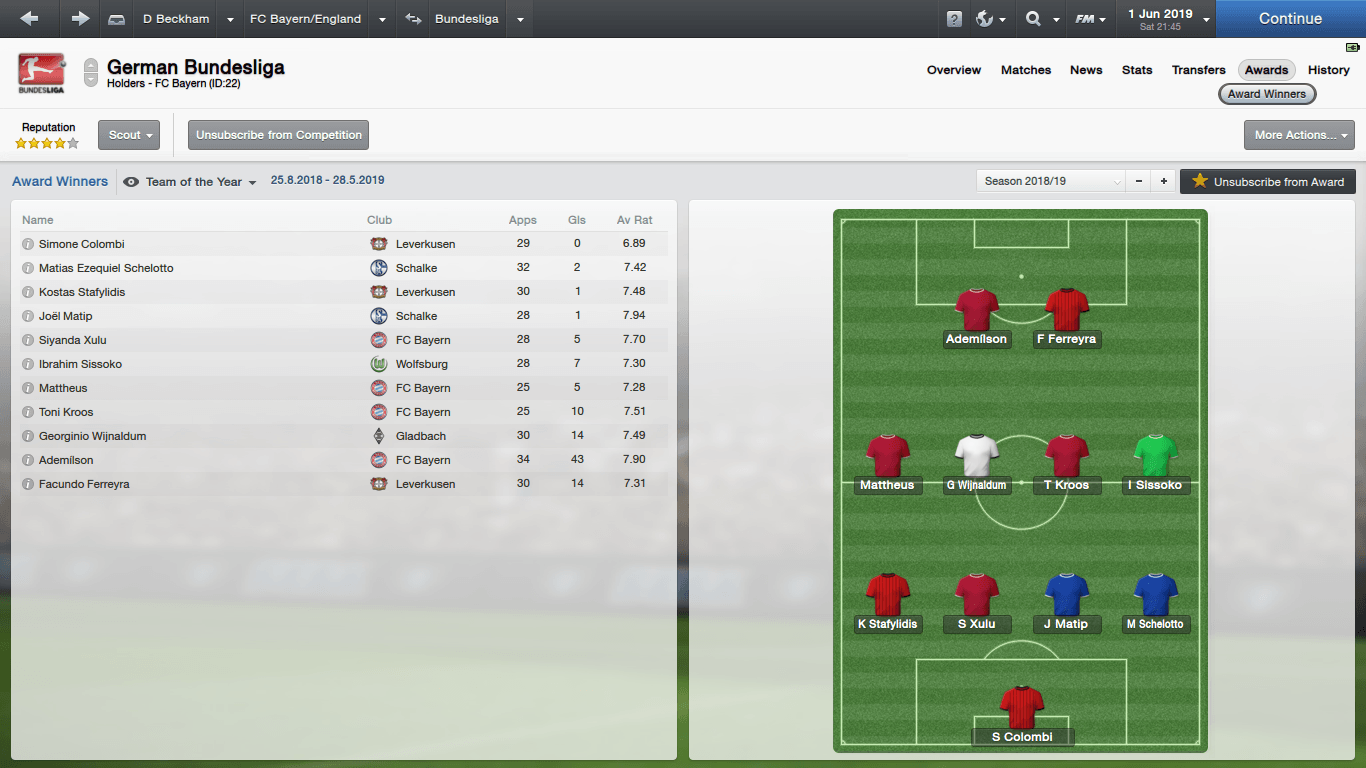 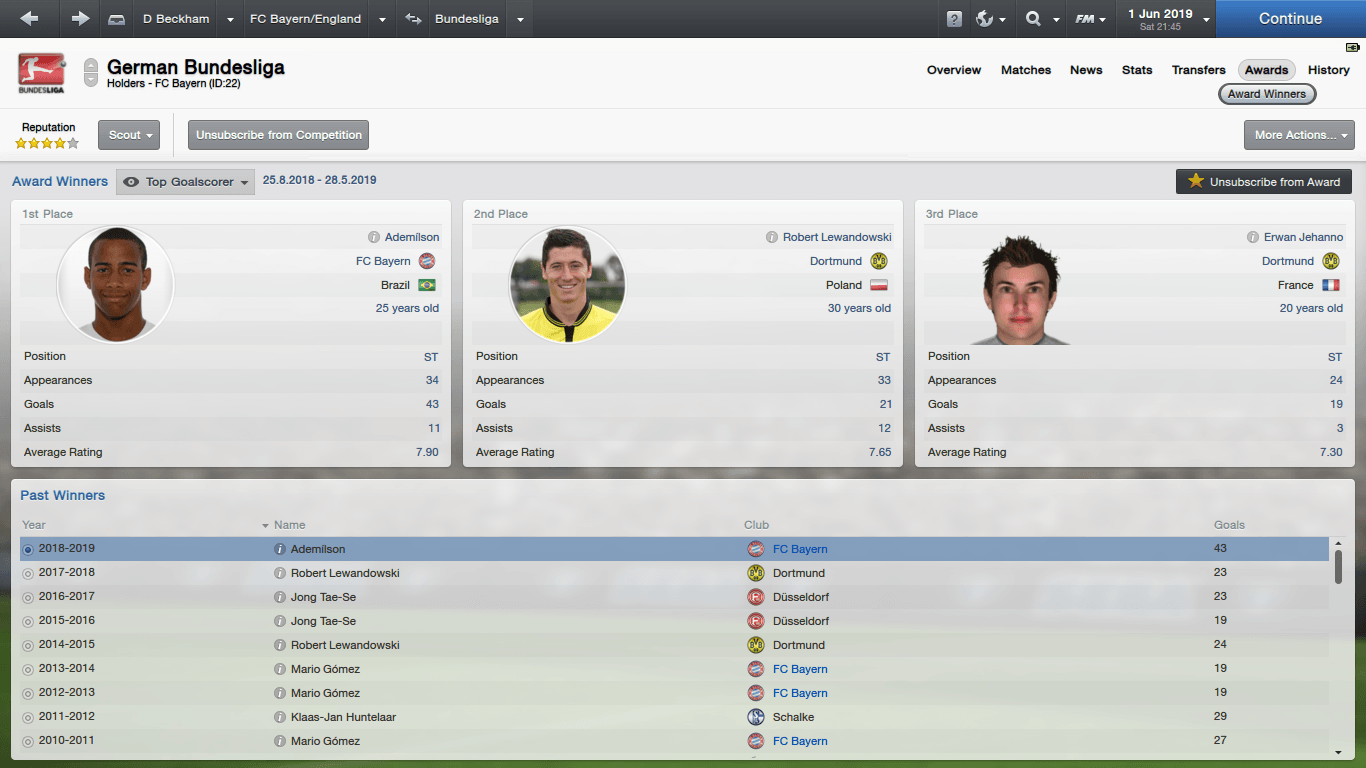 Neal
9 years
So many awards for Bayern

TheMS99
9 years
What on earth happened. From 2-0 up to 3-2 against 9 men? Bayern seriously come on! Still treble winners and league champions after a hard fought season. Well done. Hoping next season wont be like what you might be doing in your profile image!!! HAHAHA!
1
Login to Quote

k1rups
9 years
:o :o :o :o the Champions League Final. Becks must have been livid at throwing away a 2-0 lead to 9 men!! Tough luck Glenn

End of season awards are great but how did Ademilson not get striker of the year? I'm so baffled at that! Still got the treble though so a great season all in all!
1
Login to Quote

bad luck on the CL final but you get it next time.

Too bad i do not have time to write stories myself i would start one in the belgium third division and try to make them top in belgium and than europe.
1
Login to Quote

zaans
9 years
Lewandowski still at dortmund? In all of my saves he leaves after his contract expires, too bad on the CL Final! how the hell did they come back. next season it's yours

This is a superb story mate, I've been reading it for the last 3 weeks, in my opinion it's the best on the site along with the Lyon story.
1
Login to Quote

KingJoe: Glad you are!

MS: What will happen? The Bayern team having a 'group shitting session'? No, don't think that'll happen

Krupesh: I thought it was unfortunate not to win but I am happy enough we have won the treble and reached the Final. Next season we'll get our hands on it for sure. Baffled at how Ademilson didn't get Striker of the Year too

zaans: Yes, next season is our year

SuperFrankieLampard: Yeah, bottled it! Hahaha! Thanks for the dedication mate, and I will definitely be making sure Krupesh sees that comment of yours

k1rups
9 years
GLENN haha you get so many new viewers on your story commenting! Just shows how great this is. OH and by the way just thought I'd drop my 800th comment on your story. No biggie

Thanks Krupesh.
Login to Quote 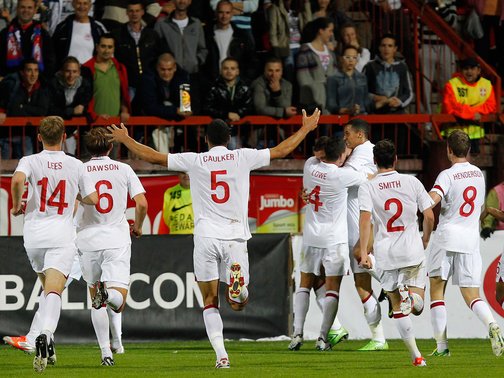 David Beckham has selected his squad to face off against Serbia in a Euro 2020 Qualifier. The same 23-man squad will then square off against South Korea in a friendly match.

Taking a break from an intense month of May at Bayern Munich, Beckham will fly to Belgrade, Serbia with assistant Ryan Giggs to meet up with the England boys.

Tom Huddlestone has been recalled back to the international team after an impressive run of form for Chelsea. Since being dumped by Liverpool in January, Huddlestone has joined the Blues and has made 12 league appearances for the remaining months of the Premier League, and has been in good form, resulting in his return to the national team set-up. Stoke City target man Andy Carroll also misses out on a place in the squad unfortunately due to his low appearance count for the Potters this year.

Due to captain Wayne Rooney's injury though, Carroll's replacement is, bizarrely, 19-year-old Saints striker Jamie Barry who has scored 17 goals in 44 Championship appearances on loan at Burnley this season. Although only possessing a meagre count of 4 England Under-21 caps, Barry is ready for senior team action, well, according to David Beckham.

Carroll's teammate, young Stoke City striker Mason Bennett has also been called up ahead of Celtic's Gabby Agbonlahor. Agbonlahor has been on a hot streak of form for the Scottish giants but Beckham oddly sees something better in Stoke's number 10. 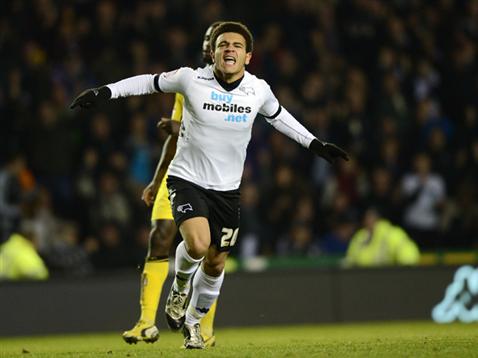 SuperFrankieLampard
9 years
Not surprising that Carroll ended up with those Giants xD Any chance I could have a screenshot of Jamie Barry, Maddison and Tabia?
1
Login to Quote

2013-05-31 22:19#107078 SuperFrankieLampard : Not surprising that Carroll ended up with those Giants xD Any chance I could have a screenshot of Jamie Barry, Maddison and Tabia? 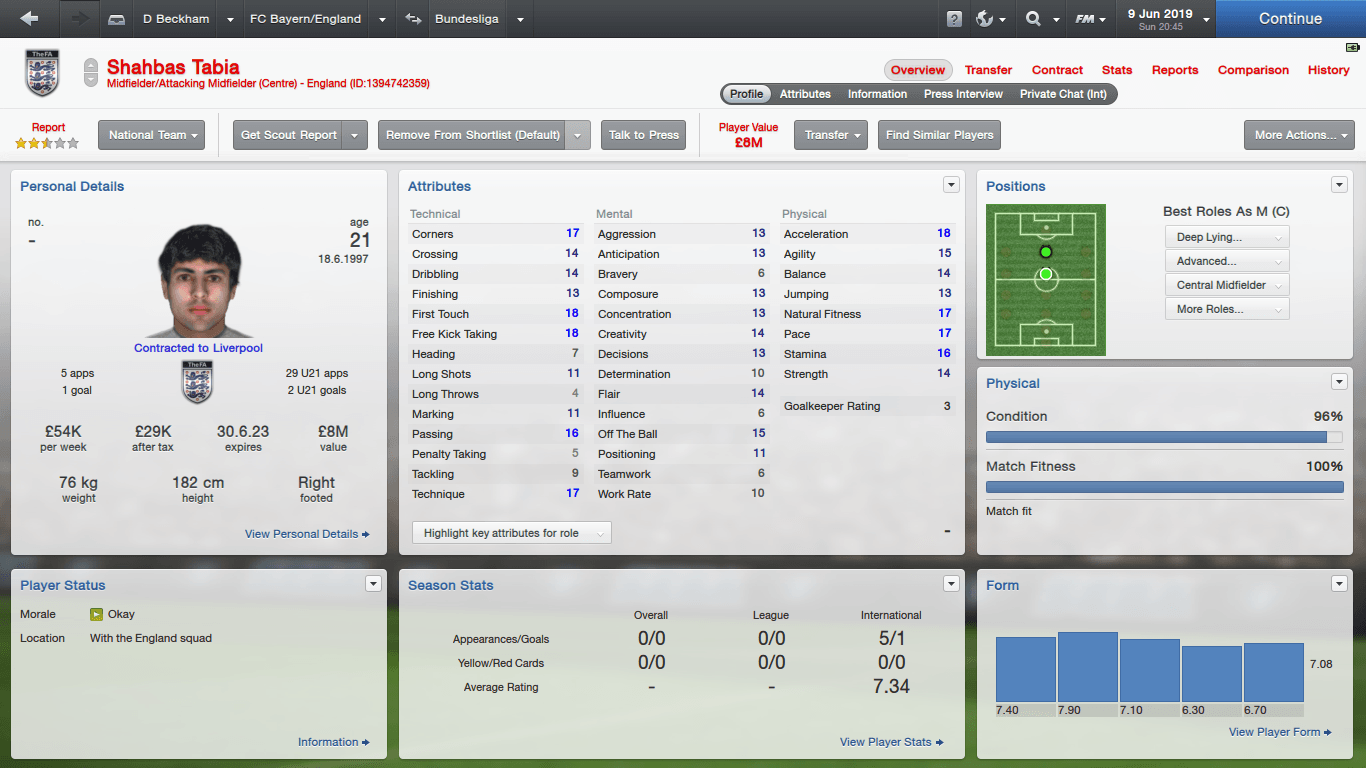 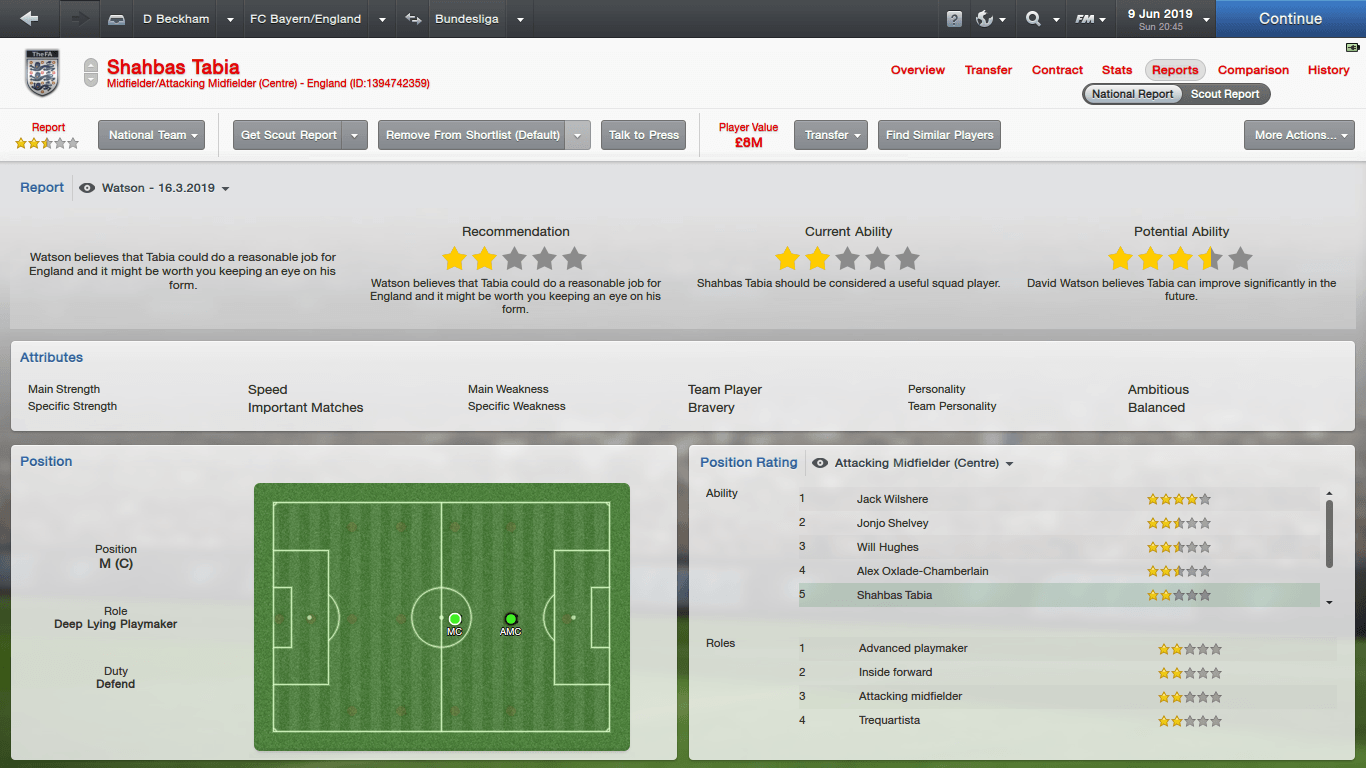 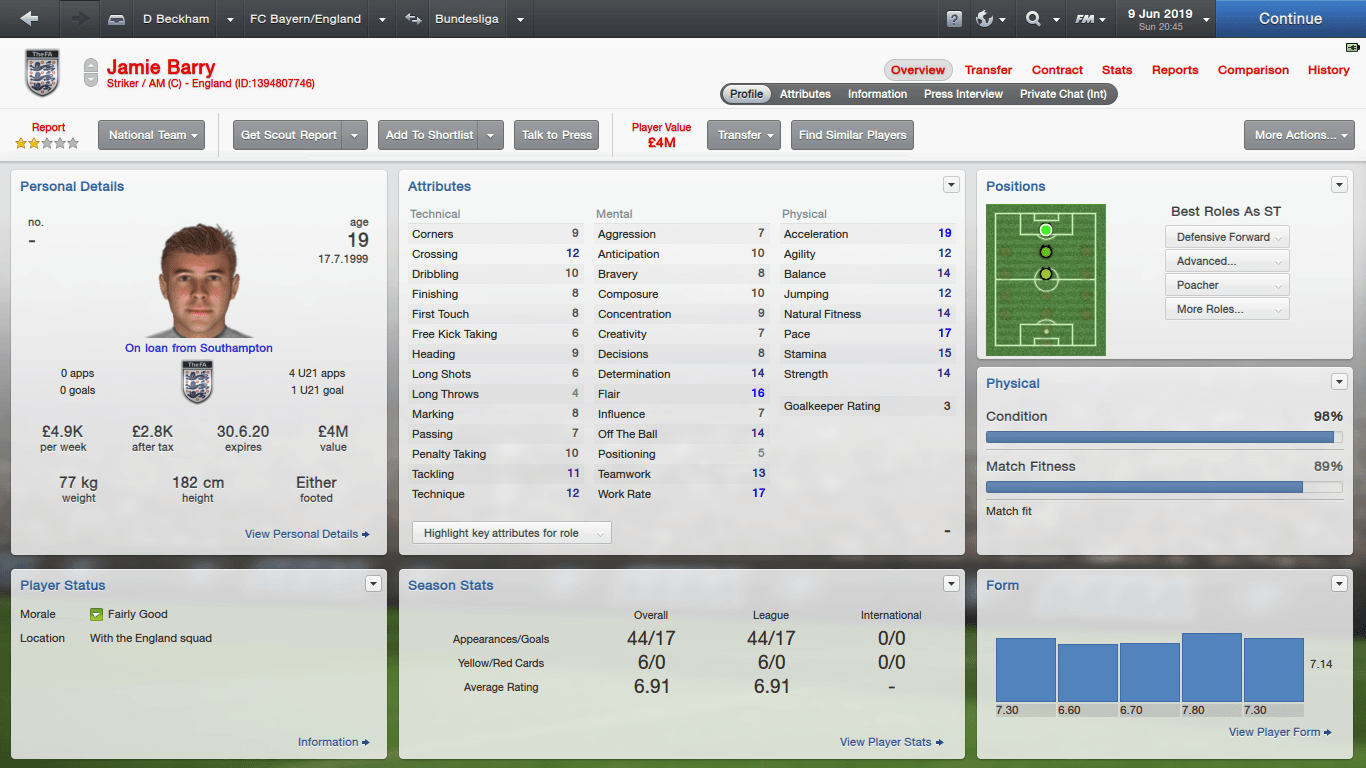 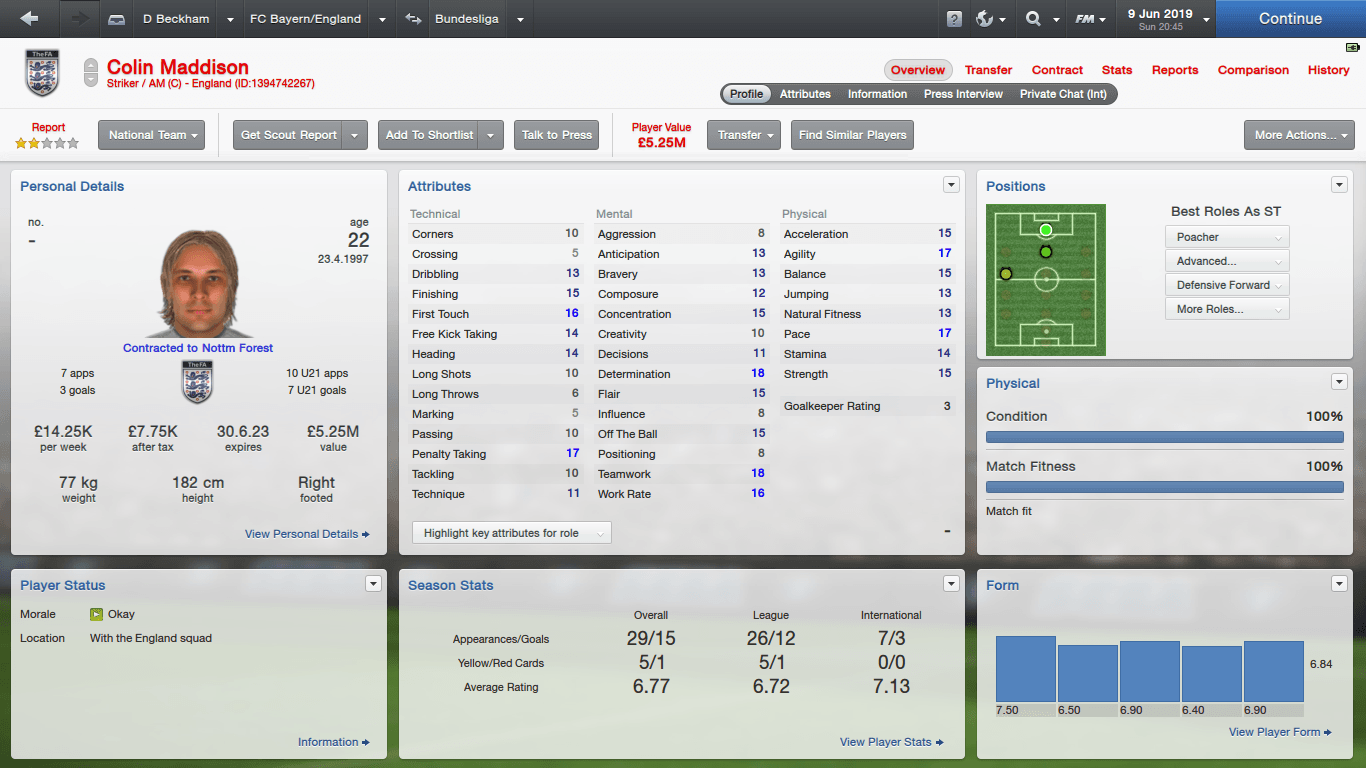 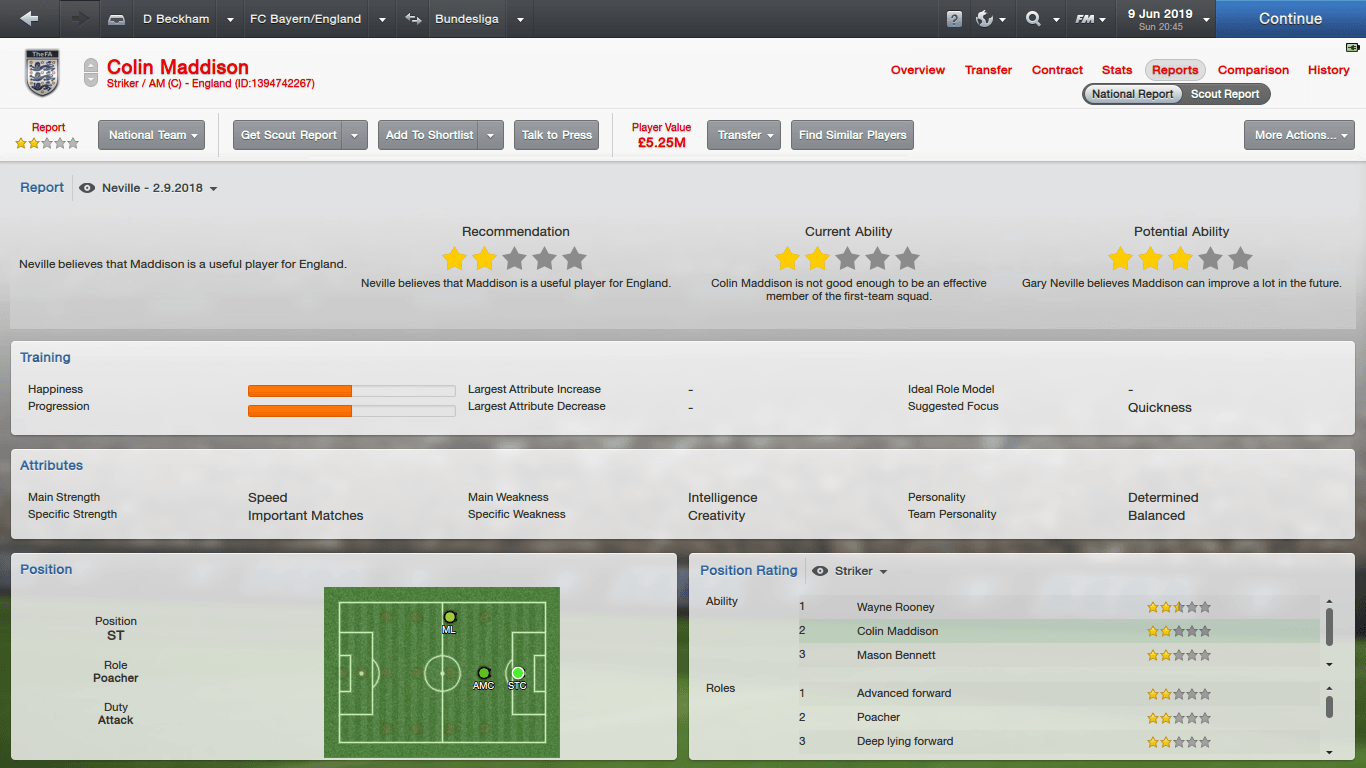