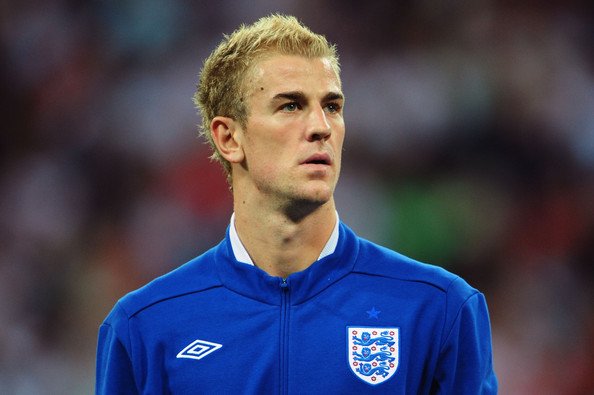 The 32-year-old won his first international cap for the Three Lions in 2008, in a friendly against Trinidad & Tobago, and has been the established first-choice goalkeeper since 2011.

Now in 2019, he continues to serve the Three Lions with distinction.

He will receive a golden cap in the Millennium Stadium just before the match, commemorating his entrance into the three-digit-cap hall of fame.

The only other current international with more than 100 caps is aging captain Wayne Rooney, who boasts a vast number of 138 caps.

Hart plays for Manchester City on club level and has been a part of the Citizens since 2007, and took over the mantle as first-choice in 2010 following a successful loan spell at Birmingham. He has now amassed 381 Premier League appearances for the blue half of Manchester, and has also won two Premier League titles, two FA Cups, as well as a single Europa League medal.

Hart was also part of the England team who took over in the World Cup 2014, breezing through the tournament to eventually lift their second World Cup - their first win way back in 1966. 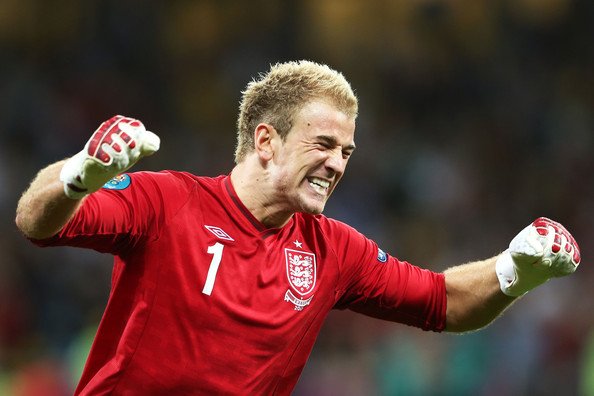 From a young, promising-looking teenager at Shrewsbury, Joe Hart has certainly blossomed into one of world football's global superstars.

Hart appeared in the pre-match press conference with manager David Beckham, confirming speculation that he would be named as captain for the night to celebrate his 100th cap.

"I don't know which one is better, winning your 100th cap or captaining England," the City stopper sheepishly admitted to the English press. "All I know is that both are brilliant, both are dreams I've only dared to dream of in the past, and that it's going to be a big night for me, a night I'm going to cherish. 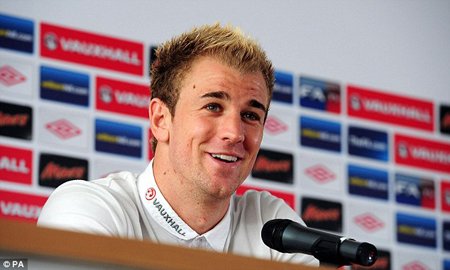 "I have come very far in my England career, further than I've expected. I'm very happy every time I pull on an England kit and I'm delighted every time I get to play for the nation. I hope David will continue to pick me for every squad, because my next target is Peter Shilton's record of 125 caps.

"Shilton was a great goalkeeper for England, dare I say the best in our history, and to have the same number of, or more caps than him, would be fantastic. I think that would make me the best goalkeeper in England's history, and that's a title I've always wanted to achieve since I played my first game for Shrewsbury." Beckham also heaped praises on his number one, revealing he had been following tomorrow's skipper even before his managerial career.

"When he joined Manchester City, I remember myself thinking, 'this Joe Hart is one to look out for'. Now here he is," smiled Beckham. "100 caps for England is a massive achievement, and I'm glad Joe's been able to accomplish it."

"I can't see myself leaving Manchester City, not right now, no," Hart admitted. The goalkeeper has reveled as one of City's best players since they won the Premier League for the first time in 2012, all those years ago. However, his ability to continue as first-choice keeper came into question in 2018, as he began to show signs of age.

For the first time in his Manchester City career, Hart was transfer-listed.

But he was quickly back in the first-team, and went on to appear in every single Premier League game that season.

"I've sometimes had some disagreements with Michael (Laudrup, City manager)", Hart said. "But it's never been something that would escalate into a full-blown fight. He's a good guy and he's rather charismatic. It's hard to pick a fight with him. He has full faith in me continuing on as first-choice at City, so I have no intention of stopping either.

"I love Manchester City, I love the club, I love the fans, and I love playing for City. We've won very little here compared to Manchester United, but I wouldn't switch places with David De Gea if given the chance, because I love it here at City. As long as they need me, I will keep playing for them."
Login to Quote

Louis O.
9 years
No chance for Butland then? Hart is better though, so it makes sense 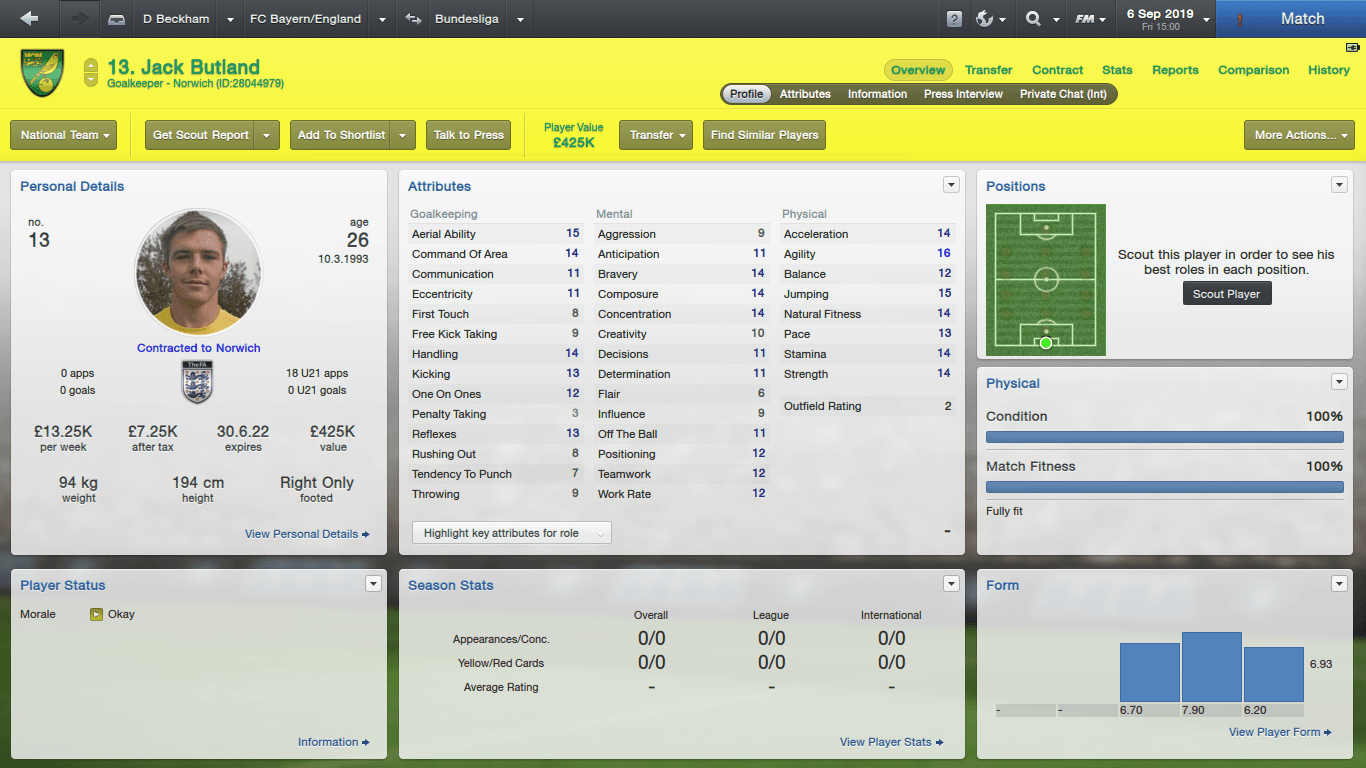 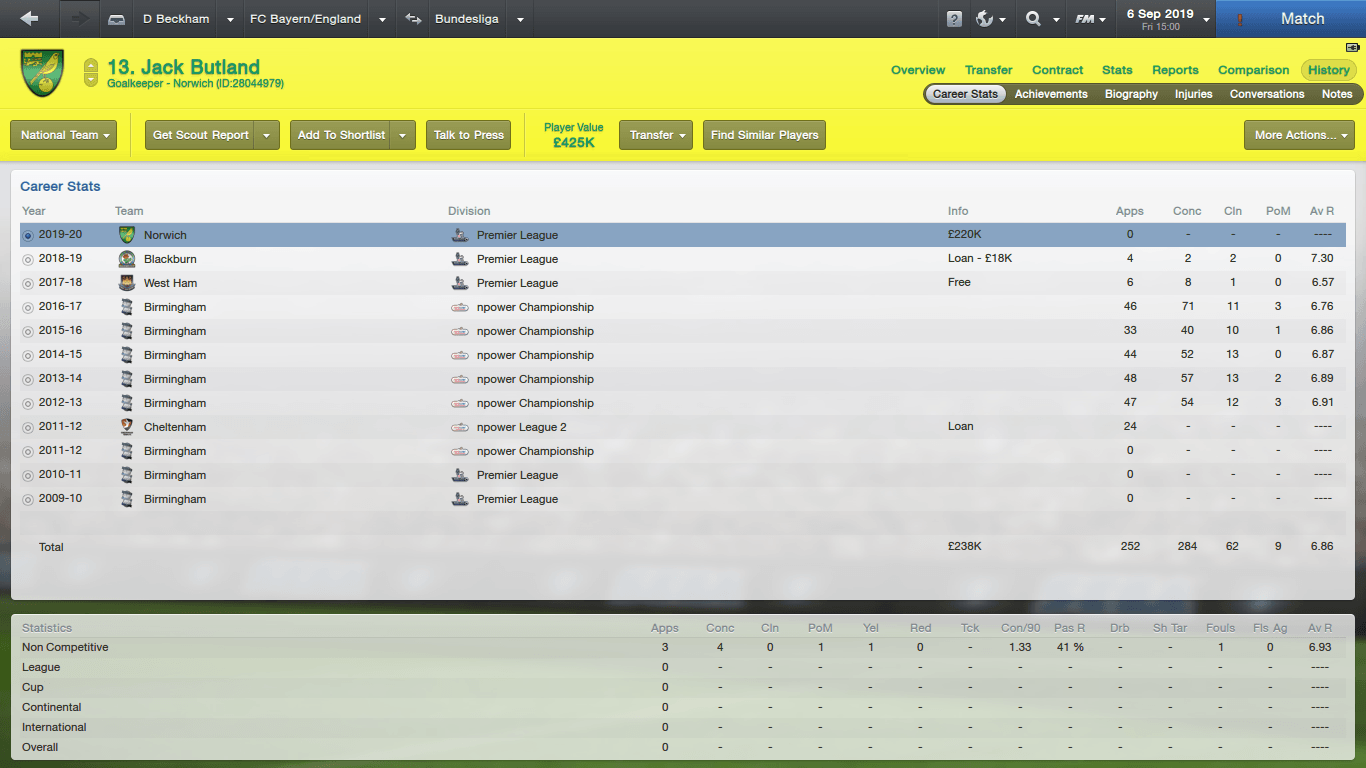 Yeah, Rab. From Swansea to West Bromwich to Liverpool to Manchester City! Quite a career.
Login to Quote

swag
9 years
Yes, Butland DOES deserve a call up, against San Marino or Bhutan maybe!
1
Login to Quote

Krupesh: Yeah. 71 goals conceded for Birmingham IN THE CHAMPIONSHIP.

Path to the Quadruple 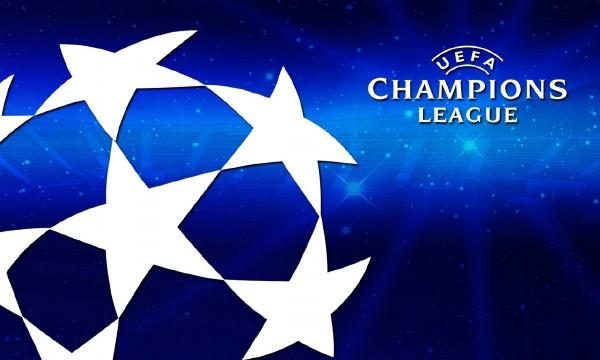 As Bayern Munich were drawn in Group H of the Champions League today, manager David Beckham has declared that they were on "the path to the quadruple".

This year, the German giants are drawn with FC Sochaux-Montbe of France, SL Benfica of Portugal, as well as Sampdoria of Italy - with former Bayern old boys Thomas Muller and Mateo Musacchio playing for the latter. 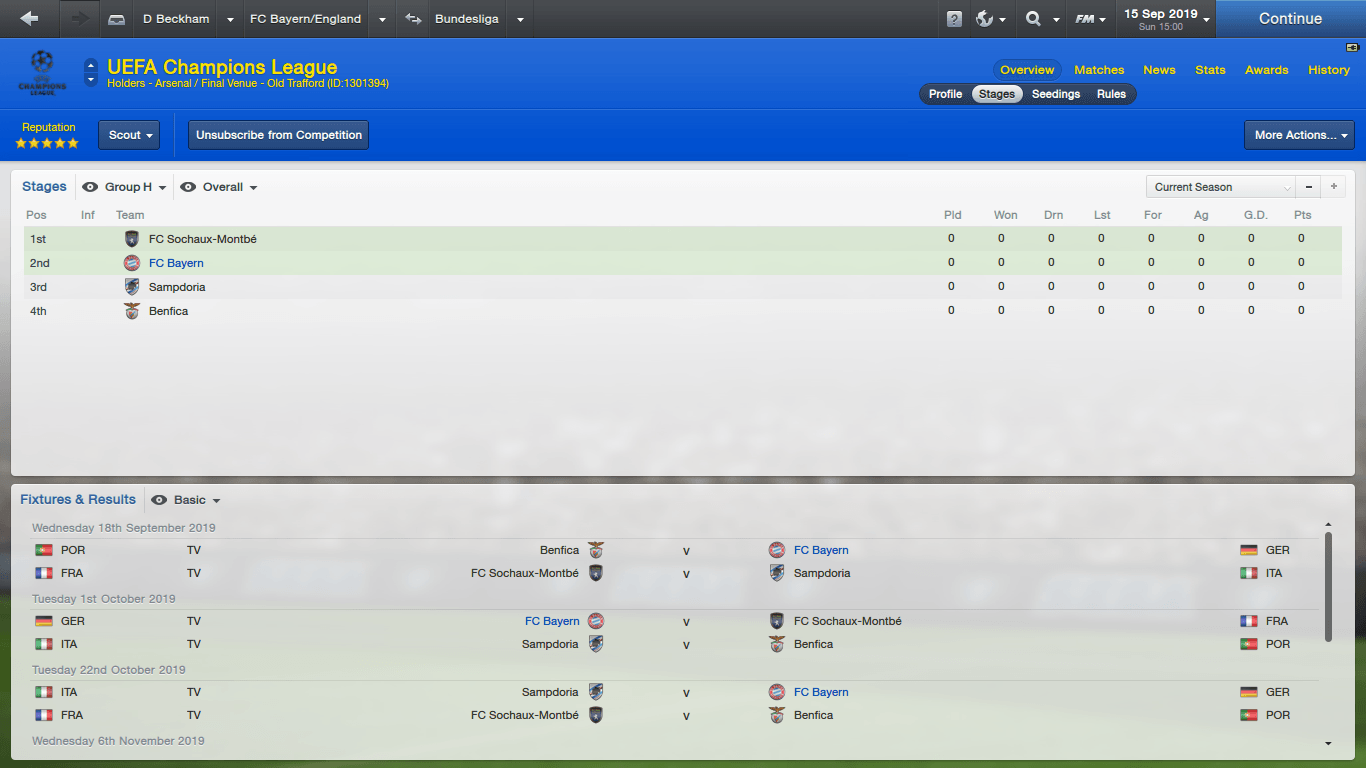 "It's a relatively easy group for us," Beckham said. "My minimum expectation for the team would be to top the group with no points dropped.

"Sampdoria, Sochaux and Benfica are all quality teams but they weren't the ones who reached the Champions League Final last season. If we want to live up to our title as Champions League favorites, we have to top this group."
Login to Quote

edu1878
9 years
Great update to a great story. Hopefully you should escape out of that champions league group relatively unscathed. Great update on Joe Hart and it was interesting to see how Jack Butland turned out. Isn't he supposed to be the future of English goalkeeping?
1
Login to Quote

Hello, and welcome to the first edition of this brand new series Bayern's Next Superstar, where we here at FCB TV will pick a wonder kid from the current team and tell every single one of you Bayern Munich fans all about him. Languages are available in German and English.

The future superstar we're covering today will be Rodrigo Borges. He's an 18-year-old Portuguese who's already a Portugual Under-21 international. 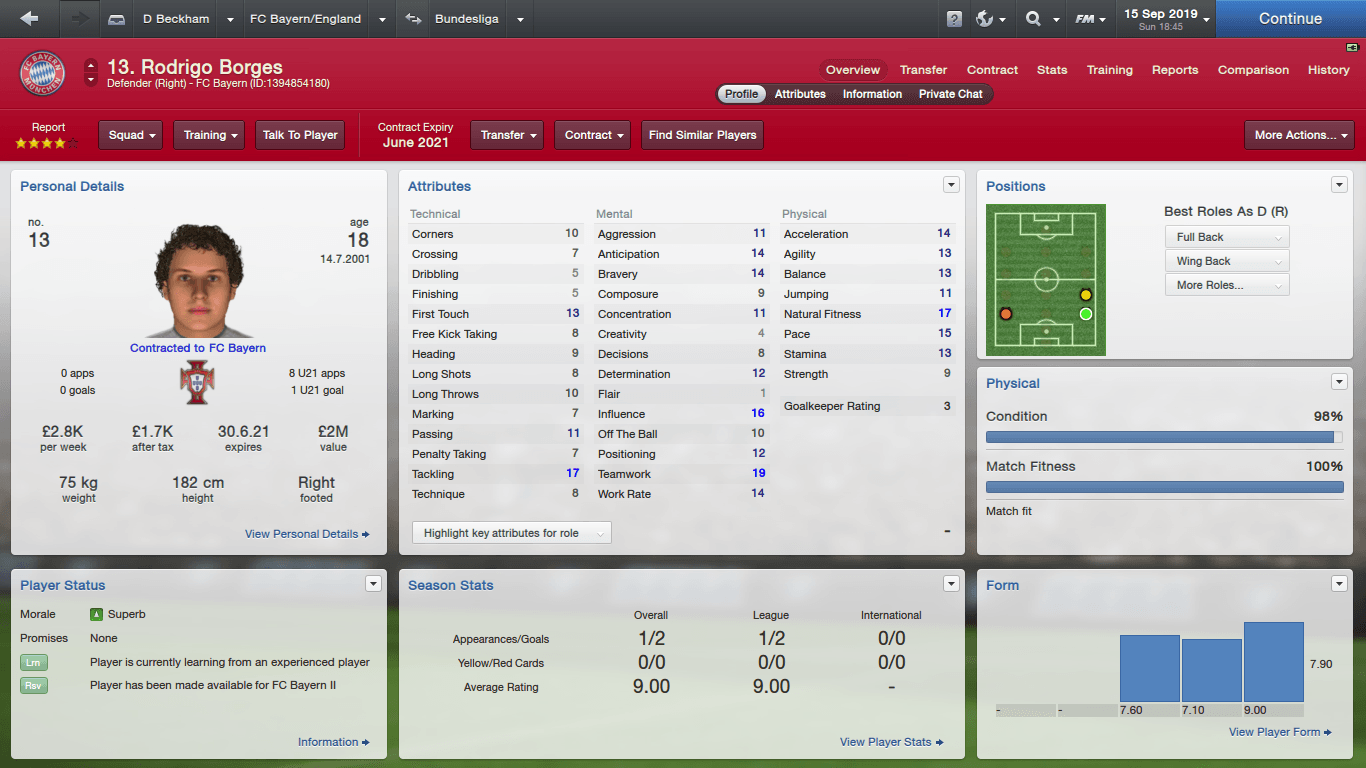 Yesterday, in a 6-0 thrashing of Hannover, Borges made his senior team debut for Bayern Munich, coming on as a substitute for Ryan Garland in the 69th minute. In a fantastic feat, he managed to score 2 spectacular goals, despite playing at right-back. Though previously unfamiliar to most fans, Borges' name is now being quietly whispered throughout the entire Bundesliga.

So who exactly is this young lad?

Borges joined the academy of Beira-Mar as a boy in his homeland of Portugal, and worked his way up the ranks, eventually making his first appearance for Beira-Mar Under-19s in 2016 at the age of just 15.

The promising youngster soon caught the eye of Bayern manager David Beckham, who brought him to Munich in 2018. 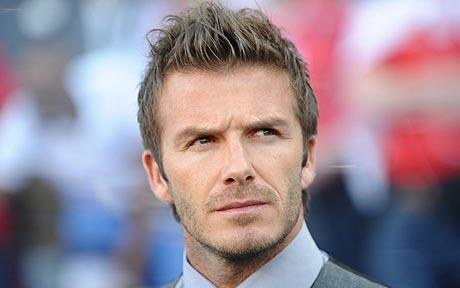 Borges was immediately slotted into the Reserves team and he became an important player for Bayern Munich II, making 20 appearances for them in the Reserves league and generally impressing at right-back.

He was then given an opportunity for first-team chances as Beckham opted to loan him out. Borges packed his bags for a short trip home to Portugal with Maritimo offering to take him for one season. Despite being used as solely a rotation player, Borges still managed to impress both Maritimo staff and Bayern scouts alike with his 14 league appearances in the Liga Zon Sagres.

Straight after his loan at Maritimo, Borges was called up to Portugal Under-19s for the Under-19s European Championships. Fighting their way through to the Final, Borges and his teammates eventually lost out to his fellow Bayern Munich II teammate Jeandy Besnard's France Under-21s. However, it still proved to be a successful tournament for Borges, as he was crowned Player of the Tournament.

With all his achievements so far, as well as the splendid 2 goals he scored in his Bayern Munich debut yesterday, 18-year-old Rodrigo Borges no doubt has a fantastic future at the Allianz Arena.
Login to Quote

2013-06-05 13:02#109056 edu1878 : Great update to a great story. Hopefully you should escape out of that champions league group relatively unscathed. Great update on Joe Hart and it was interesting to see how Jack Butland turned out. Isn't he supposed to be the future of English goalkeeping?

Unfortunately things didn't go quite as planned for him

shylax
9 years
If he works on marking and heading, he will be one of the top defenders, amazing he scored two goals with such poor offensive-minded attributes.
1
Login to Quote

First goal was meant to be a cross, a complete fluke. Second goal was a right beauty though. For some reason he had to sprint into the box and be on the receiving end of a pass, and he just smashed it in

edu1878
9 years • Edited
Celso Borges looks like he will be a great player. His first goal sounds a bit like Tommy Oar's first ever international goal.. look it up.
Login to Quote