We ended 2017 top of the league and we started 2018 with a job to finish, and that job is to win the league. With a lot of confidence built, we felt like we could beat the very best.

We played seven games last month, winning five and losing two. We kicked off with a win at home to Tranmere, but we then lost to Derby away. We bounced back with a 3-1 win away to Rotherham, before BPL giants Burnley destroyed us 3-0 at their place in the FA Cup. We bounced back to beat Leyton Orient, Oxford and lastly Gillingham. We looked leaky in defence, but we scored a few. I won the Manager of the Month award, which I'm proud of. 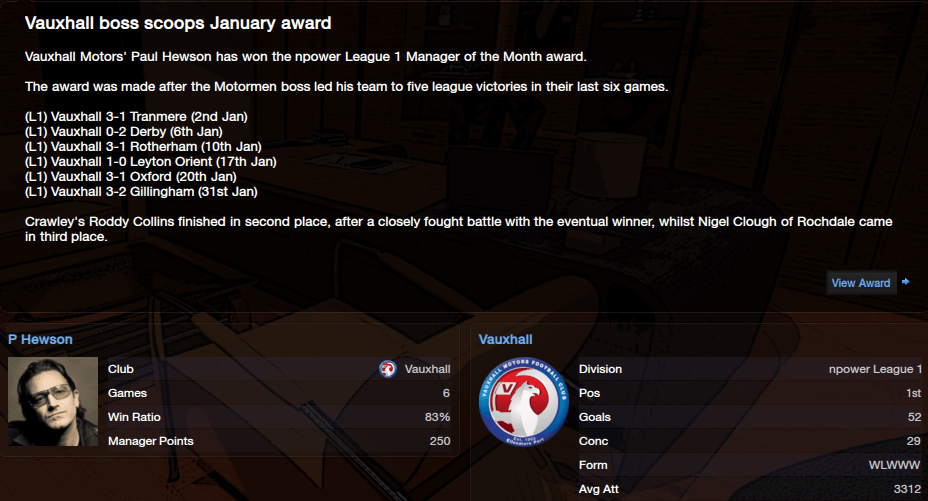 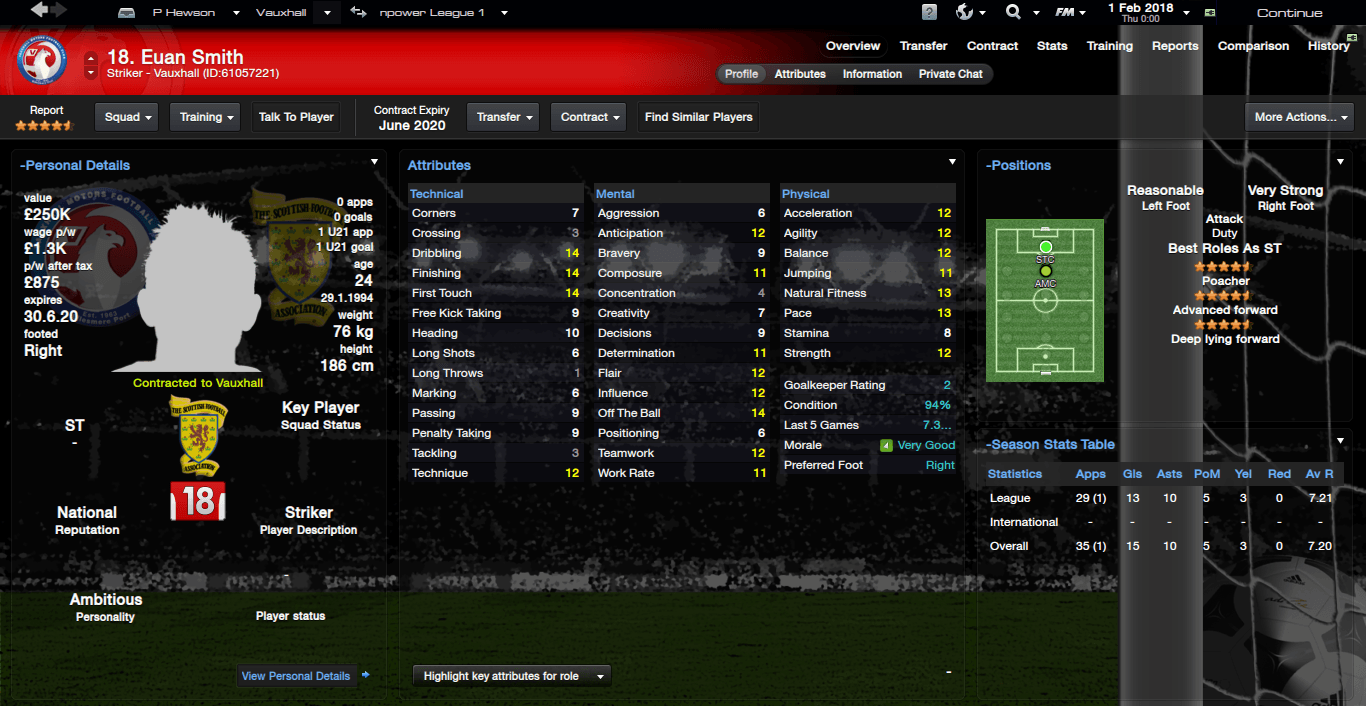 Euan Smith is my player of the month for January. He put in a real shift for the team and he did us proud, scoring four goals in an exciting month. He has been a consistent striker for us this season. His goal tally might not be outstanding, but he is one of three top strikers at the club and he has done very well so far this season. 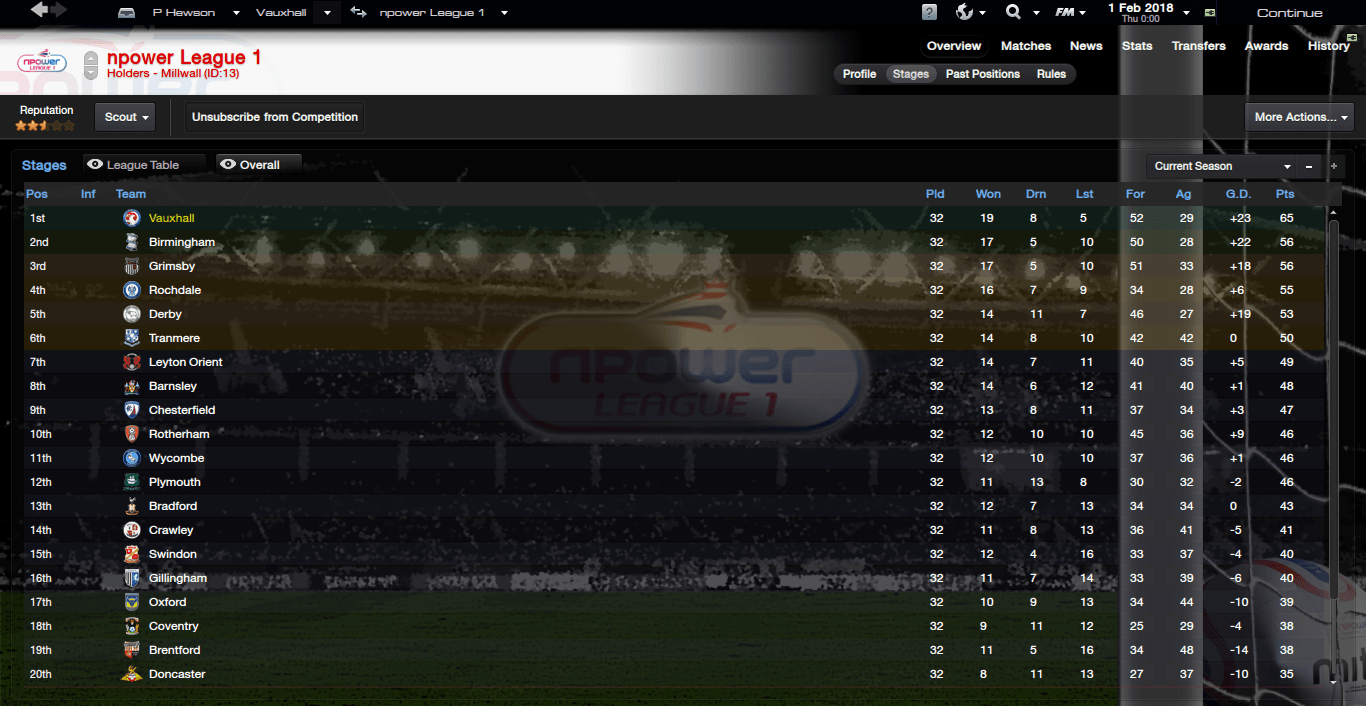 We have now established a nine point gap at the top of the table and we are looking like strong favourites to win the league. With just fourteen games left, we can look forward to another league win, provided we keep our cool for the rest of the season.

We have only three games next month, which we will look to claim maximum points from. If we can do this, we will be in a very strong position to win the league.
Login to Quote

Glenn T
9 years
Two unlucky losses against Derby and Burnley, but holy crap, 9 points ahead! You guys are invincible!
1
Login to Quote

Louis O.
9 years
On course for the title, keep it up

Blue
9 years
Not the absolute best month in the world, but still a good month

keep this up Justice

keep this up Justice

Thanks guys, this has probably been our best season yet!

Deleted
9 years
Haha I love this. I can just imagine you concluding press conferences and team talks by grabbing a guitar and belting "It's a Beautiful Day!!!". Keep it up
1
Login to Quote

Jamesg237
9 years
It will be amazing if you manage to get Vauxhall Motors up into the Championship. It will rank as one of the highest achievements I have seen on this site in my opinion. Good luck for the remainder of the season.
1
Login to Quote


Haha, how do you know I'm not doing it right now?

2013-05-19 12:42#102561 Jamesg237 : It will be amazing if you manage to get Vauxhall Motors up into the Championship. It will rank as one of the highest achievements I have seen on this site in my opinion. Good luck for the remainder of the season.


Thanks James, although I think the likes of Or Dabool and Joannes are still miles ahead of any of us


Hey guys, I'm going on a personal holiday for the next week and I will not be posting updates until I return. I thank you all for following me on this journey so far and I hope that you can be loyal and stick with me when I return. This has been a great adventure for me so far and there is no possibility of me stopping it! Thank you for your support, and I hope you all enjoy the Beautiful Day!

Will miss this mate, week can not go by fast enough
1
Login to Quote

Glenn T
9 years • Edited
Good luck with whatever you need doing Justice. Hope you come back soon and take Vauxhall to the Premier League where they belong

Louis O.
9 years
Goodbye Justice, looking forward to your return and the return of this story

a fantastic start in league 1.
1
Login to Quote

Justice
9 years
Thanks for all the support guys