Defense decided to sit back

Happy with the Norwich and Swansea results, at least.
Login to Quote

Clint Dempsey joined Aston Villa in the winter window, after one and a half month of being a Tottenham player where he made only 5 appearances. Now seeing the back of his time at White Hart Lane, he will go back to face the team who almost killed his national career - but this time, as an opponent. Here, in our special monthly section, we interview Clint on his time at Tottenham, Aston Villa, and who he thinks is the best player at the club. 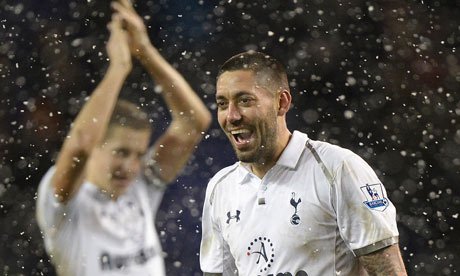 Have you been settling in well?

Clint Dempsey: Very. Brad Guzan is a good mate of mine so it helps.

In stark contrast to your 5 appearances in a Tottenham jersey, you have scored 4 in 7 appearances for Aston Villa. Why do you think that was so?

Clint Dempsey: Perhaps it's because David has been showing a lot of confidence in me. Those 5 appearances at Tottenham were like... once every two months. You can see that the Tottenham manager only played me because he had to.

Speaking of Tottenham, what do you think of your time there?

Clint Dempsey: Tottenham are one of the best clubs in the world. That's my opinion. But being there was essentially one of the worst parts of my career. Not playing was hard, especially foreign because I was accustomed to being in the line-up every week at Fulham. But knowing some of the great lads there like Gareth Bale was brilliant. Did you know he once dressed up as a monkey in one of our crazy fancy dress parties? Haha!

That is certainly interesting. Have you regretted leaving Fulham though?

If you knew about how your Tottenham career would end, would you still have signed that contract that summer?

Clint Dempsey: Most definitely not. It was a waste of one-and-a-half years, to be completely honest.

What do you think of David Beckham, then?

Clint Dempsey: Fantastic. I think every manager should try adopting his style. He talks with everyone in the club, making sure they're comfortable. The new signings, the key players, the youth players, the benchwarmers, everyone. Everyone knows him as both a great man to talk to, and not only a manager. At Tottenham, it was different. The manager there, Marcelo Bielsa, and before him, Andre Villas-Boas, couldn't care less about the players who weren't important.

Who is the best player in the Aston Villa squad so far?

Clint Dempsey: Without a doubt, Wellington Nem. Some might say Darren Bent, because of the goals he's banging in, or Ciaran Clark. All three are quality players but I think Nem exceeds them all with those beautiful crosses. I've known him for barely two months but we are already working flawlessly on the wings.

Have you ever thought of returning to the Major League Soccer to end your playing career?

Are you looking forward to facing Tottenham on the weekend?

Any chances of you scoring a hat trick?

See you all next month in our next session of AVTV Interviews.
Login to Quote Tottenham boss Marcelo Bielsa has hit back at Clint Dempsey's comments in his interview with AVTV in his post-match reaction for the Aston Villa-Tottenham game, which finished 2-0 in favour of the hosts. 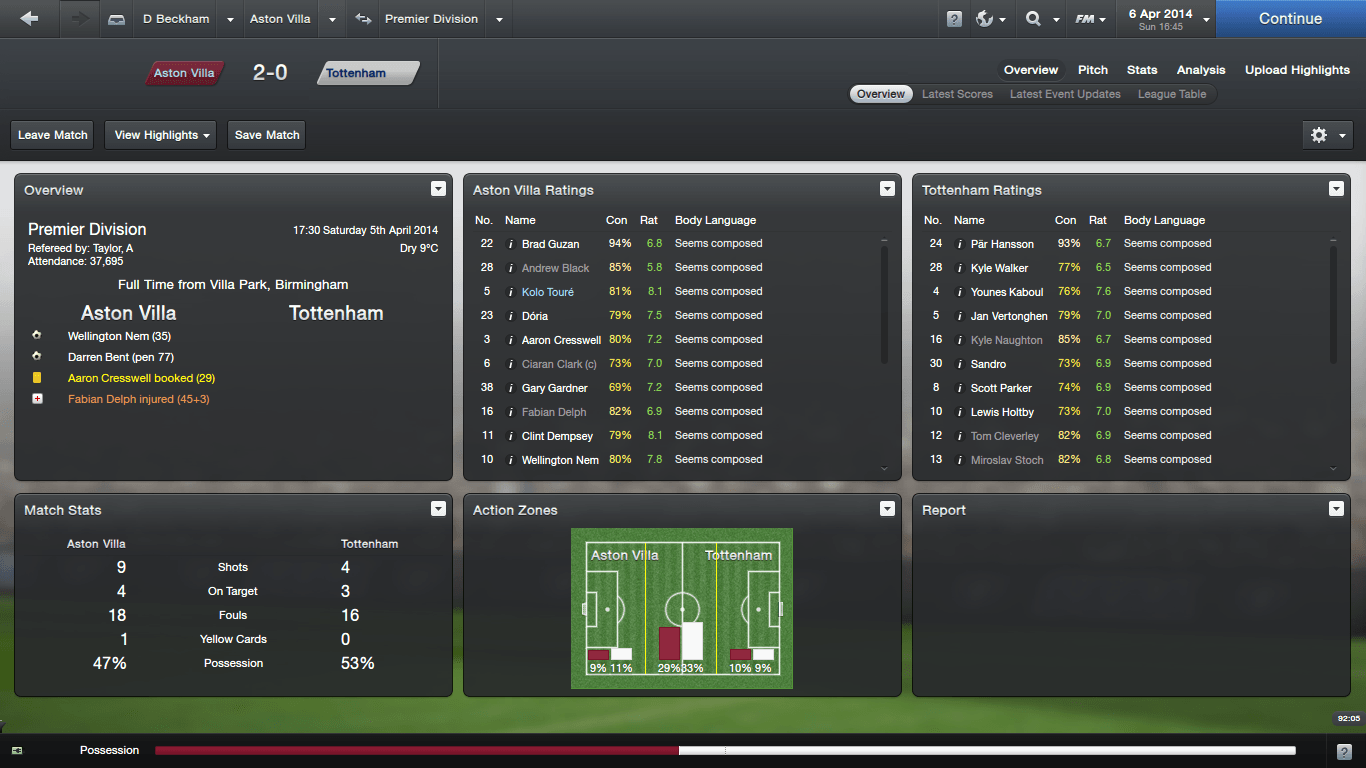 "I definitely did not dislike him," said Bielsa with a scoff, when quizzed on Dempsey's words. "I simply did not think he was good enough. I was not the one who brought him to the club.

"I also talk with as many people involved with the club as I can. Clint doesn't know what he's talking about.

"In my opinion, he's just unhappy about not being at a world class club like Tottenham any more."

The first goal of the game came courtesy of Wellington Nem after Darren Bent provided a superb cross for the Brazilian.

What Bielsa was unhappy about, though, was Villa's second goal, which came after Bent slotted away a penalty when Spurs midfielder Sandro brought down Dempsey in the box.

"I liked the first goal. It was very good of Wellington Nem, a quality goal," said Bielsa. "But the second goal, I dislike. It was not a penalty.

"In my opinion, Aston Villa got lucky with that one. I'm not going to criticize the ref because referees make mistakes. But Clint should have got up, brushed himself off and said it was fine. He shouldn't have stayed down, crying for a penalty. Sandro is not one to hurt. He should have been fine.

"Actually, I think Clint really enjoyed that. He enjoyed causing us to give away a penalty."

Bielsa's reactions have been backed by Tottenham fans, but not by fans of Aston Villa, all of whom are not amused.

"Marcelo Bielsa is a twat," said one Villa fan, who went by the name of @jasonvilla4ever and Jason Lippitt on Twiter. "I think he's just being bitter. We beat him 2-0, we're the better side. Full stop."

Dempsey also tweeted a response on his Twitter account, @clint_dempsey: "I have nothing to say about Bielsa. He knows what he's done."

It doesn't seem like the feud will die down anytime soon.
Login to Quote

End of a Dream

Aston Villa's FA Cup dream run have been ended by Newcastle, with the Magpies cruising 1-0 through to reach the Final of the competition. 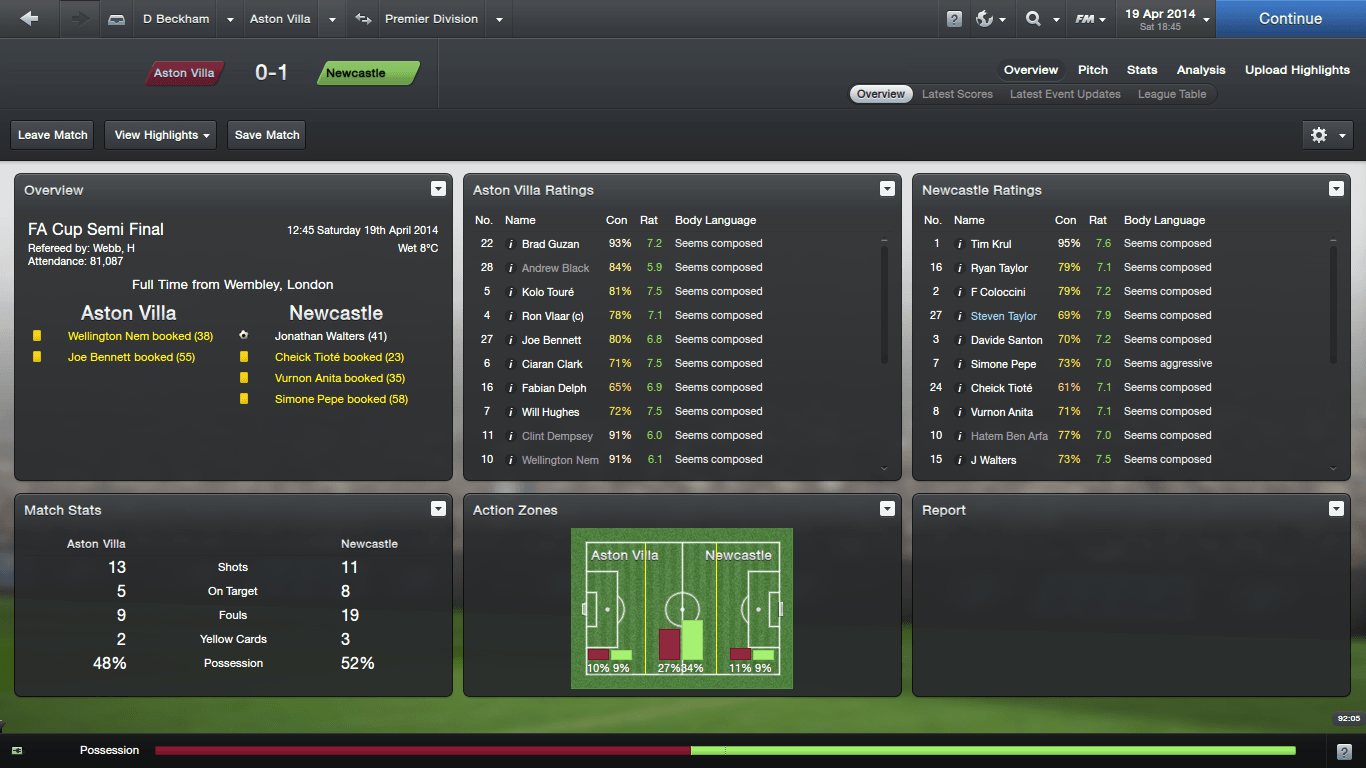 Villa fans have been made to rue what might have been, while manager David Beckham was furious at the post-match press conference.

"Darren has scored 22 goals in the Premier League," said the former England captain. "I have no idea why he didn't put his goal-scoring prowess to use today. He just ran around. I think it would be accurate to compare him to a headless chicken.

"Nem also disappeared. We were relying on him and Darren for a win today. They both disappointed us, massively."

Beckham also blasts goalkeeper Brad Guzan again, although rightfully so. The American international goal-kicked the ball into the path of Newcastle striker Jonathan Walters, who scored the important goal that sent his side through.

"It was a nonsensical goal," Beckham raged. "Is Brad a Newcastle player in disguise? I think so."
Login to Quote

Another great run of games for Aston Villa this month as David Beckham looks to push his side into the running for European qualification. 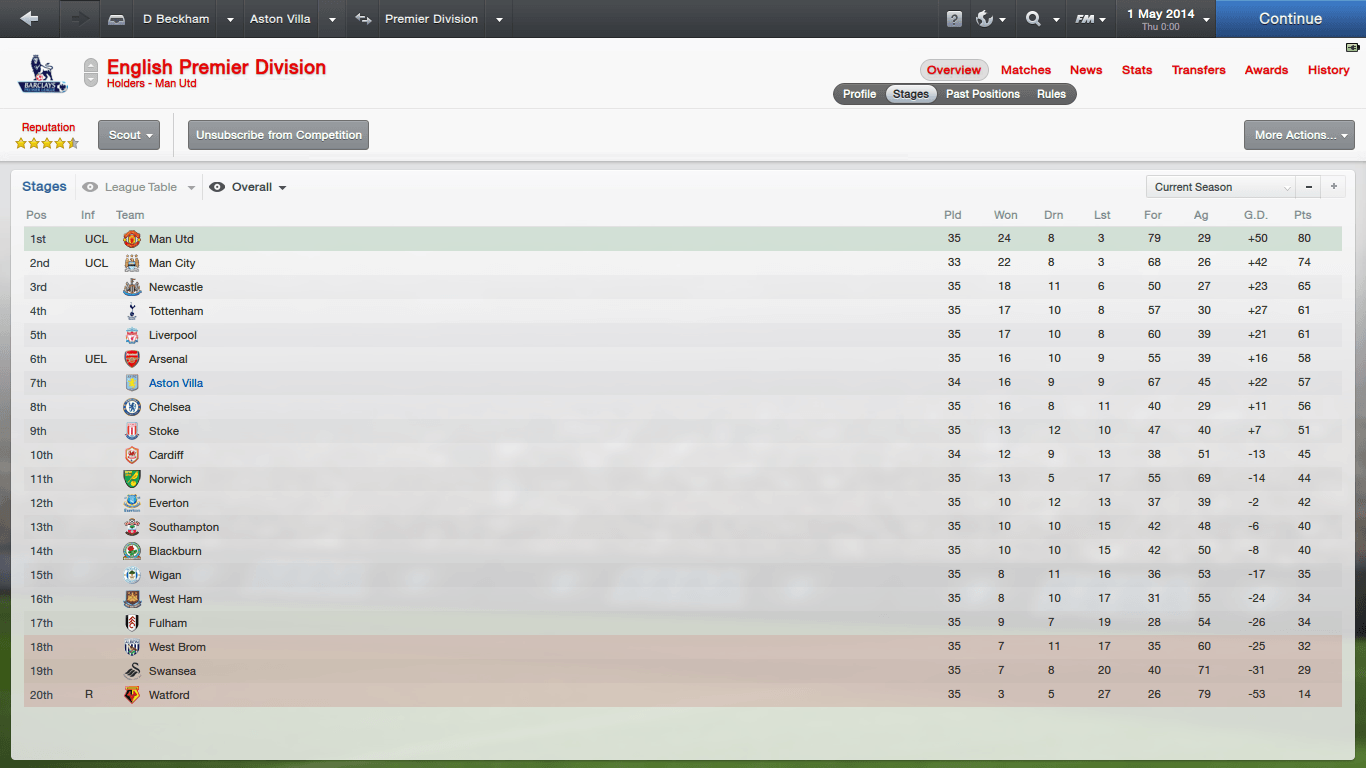 May: Out of Luck

The end-of-season slump virus has caught up to Aston Villa, as the Lions lost to West Ham and Manchester City to see Europe qualification slipping out of their hands. So close, yet so far. 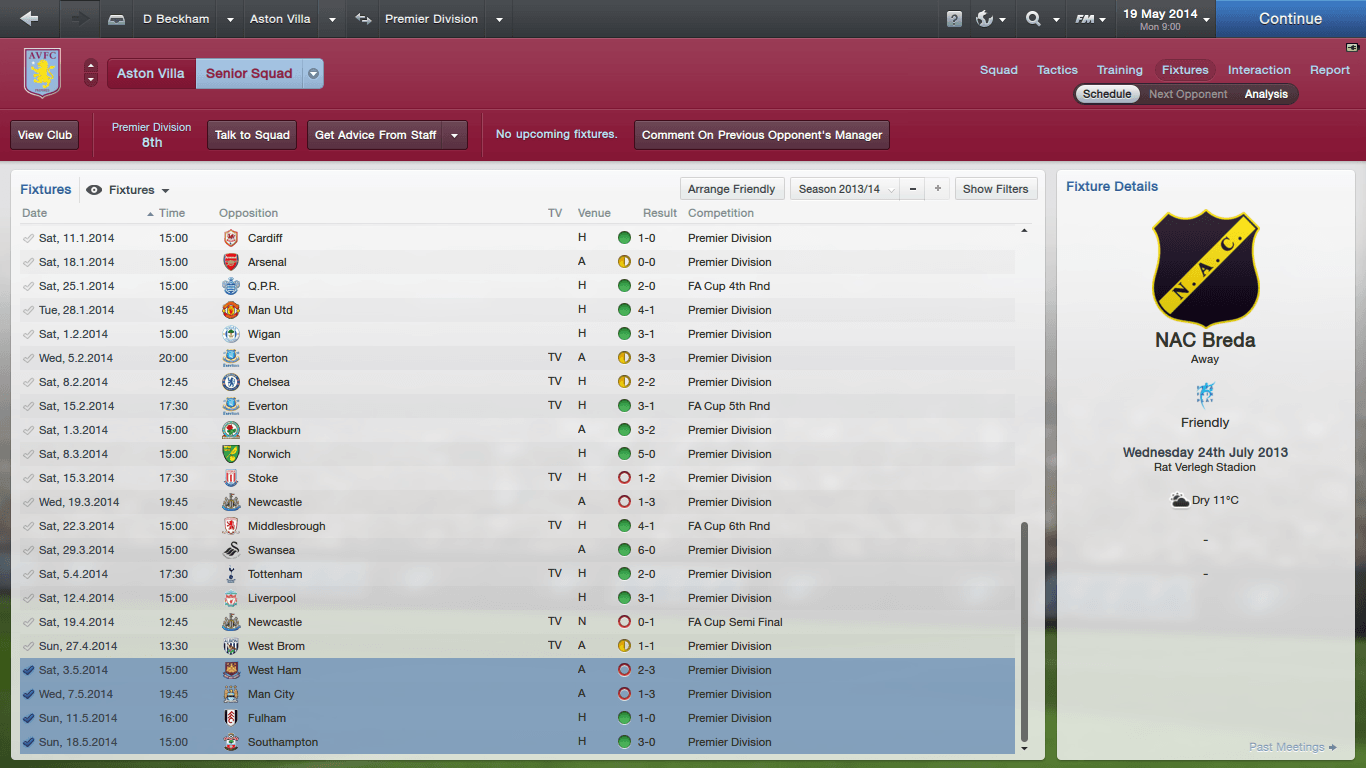 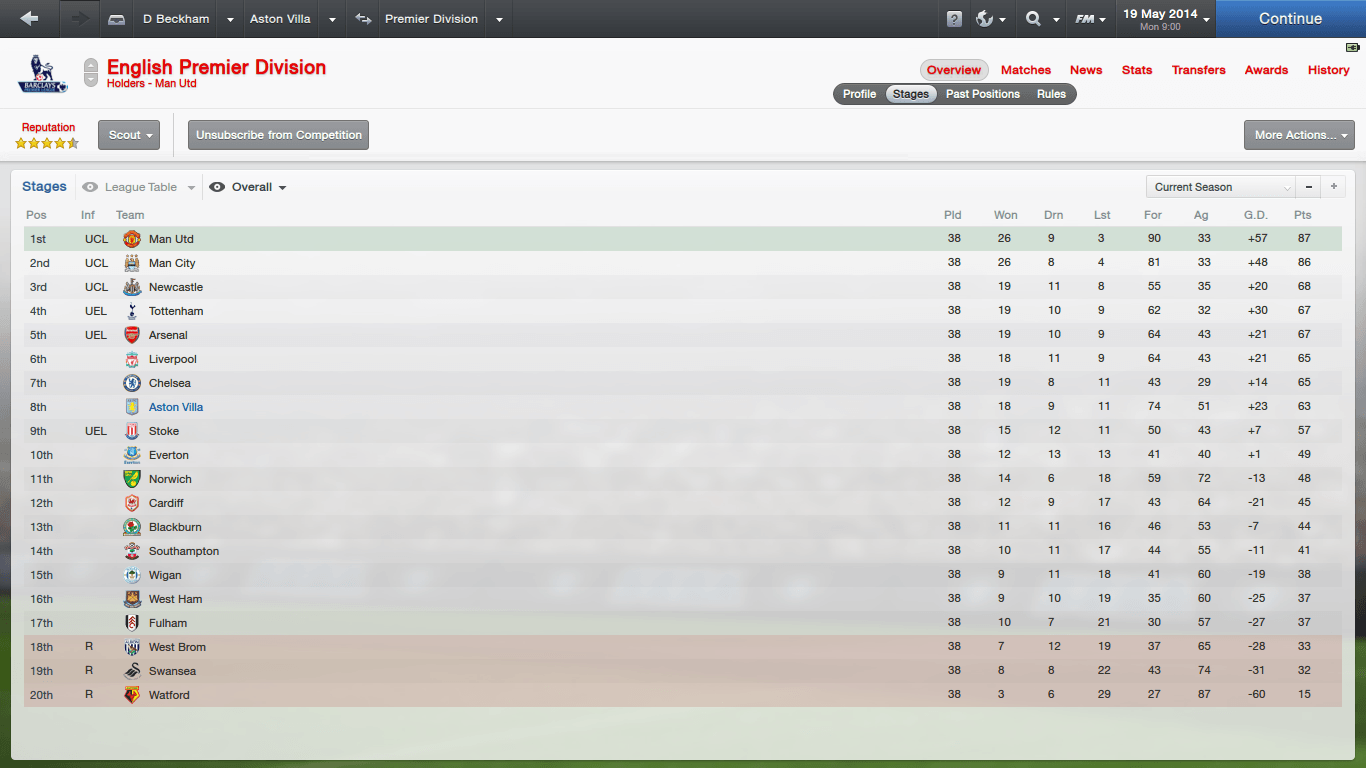 Louis O.
8 years
Winning that FA Cup semi should have been very important to you because if you miss out on Europa League you can still get it by winning the FA Cup.
1
Login to Quote

Aston Villa players won no awards this season, although Darren Bent came second for the Golden Boot while Wellington Nem won 3rd place for the Young Player of the Year. 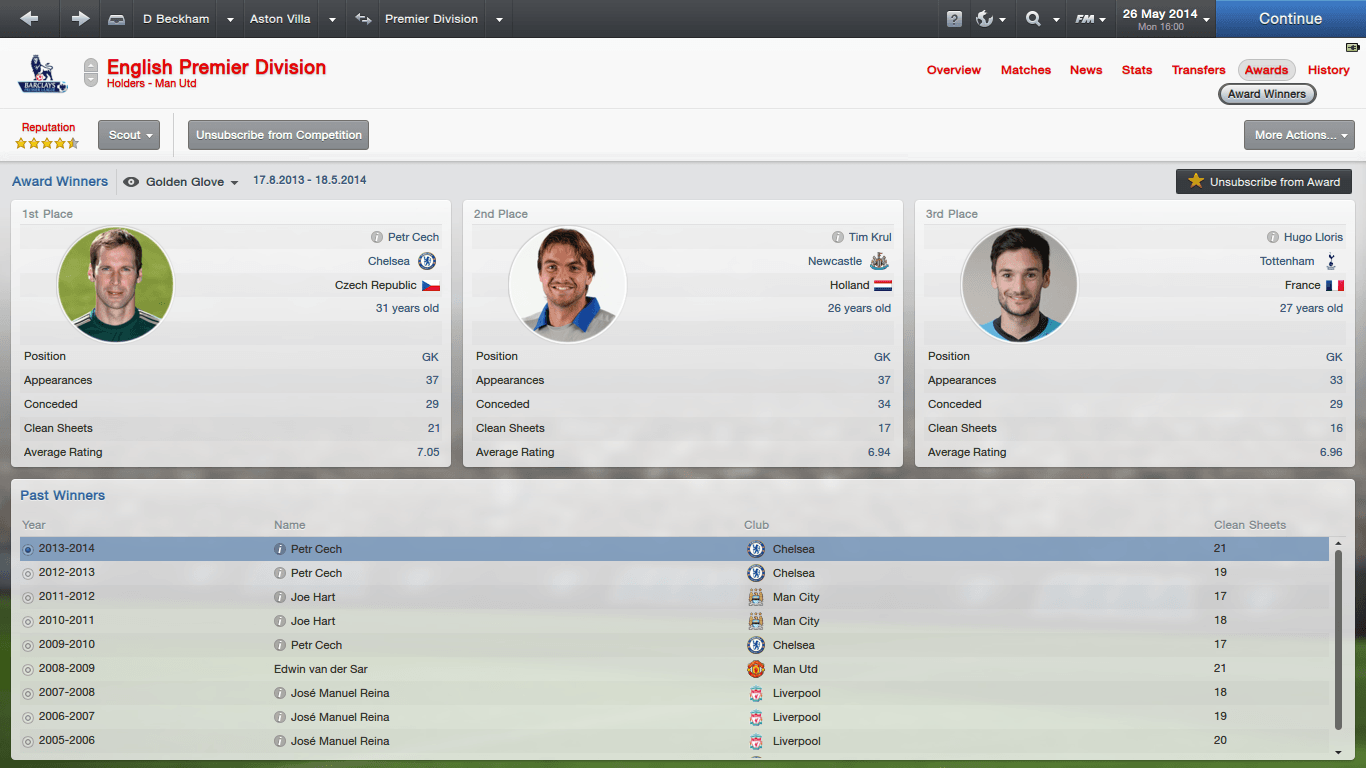 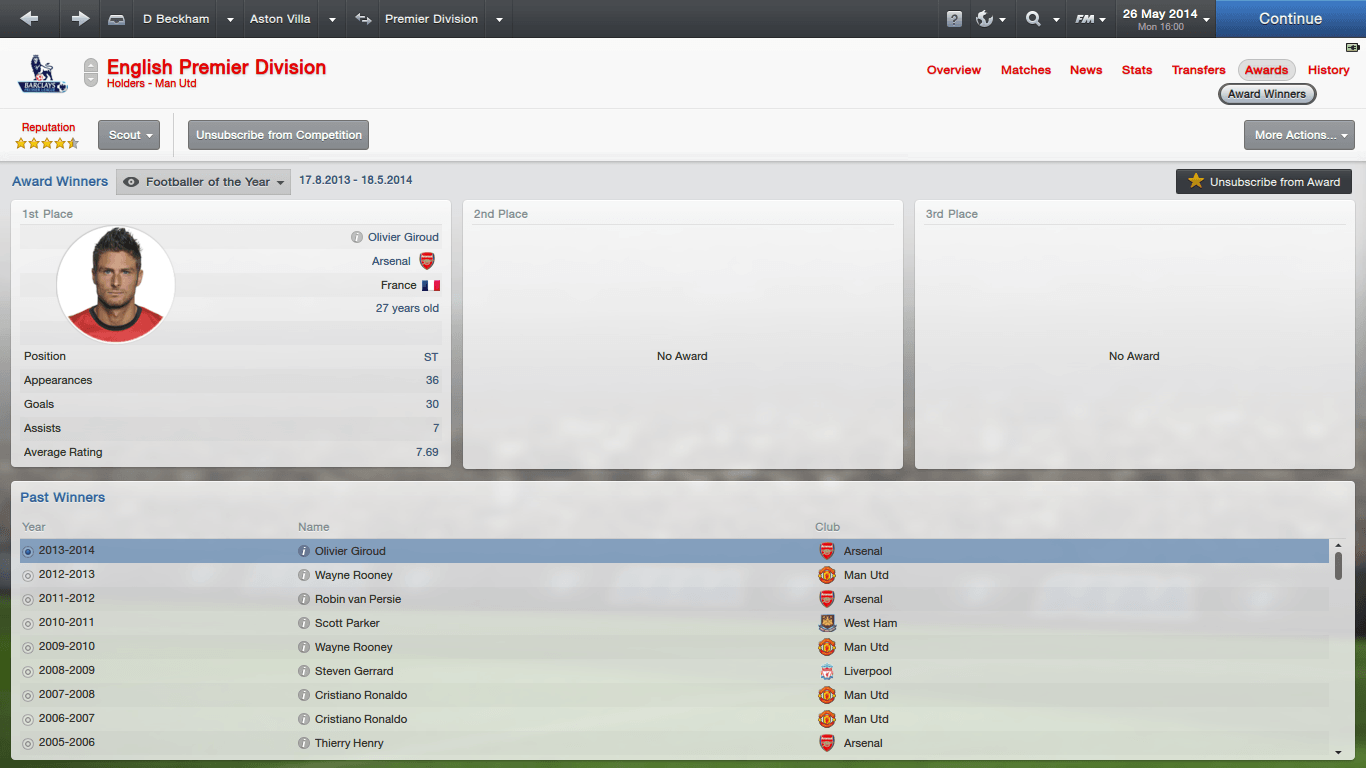 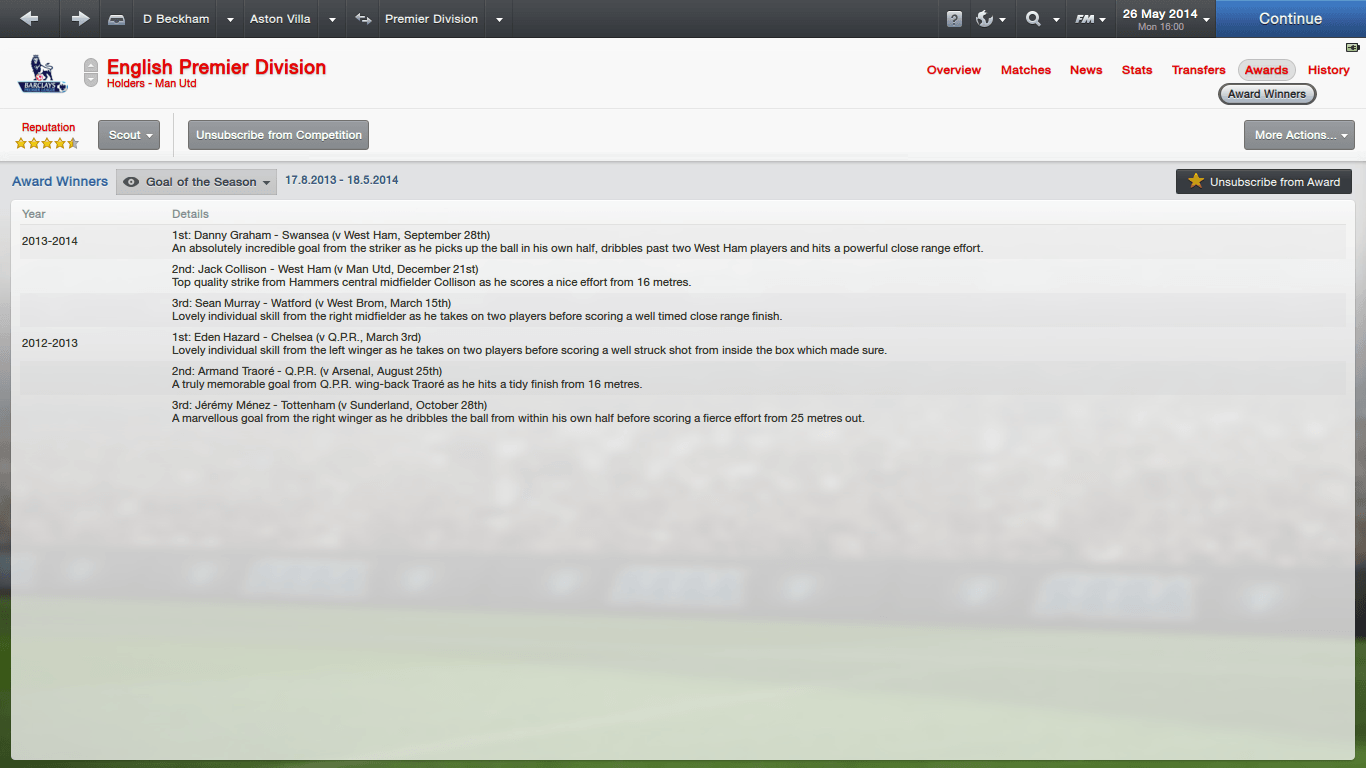 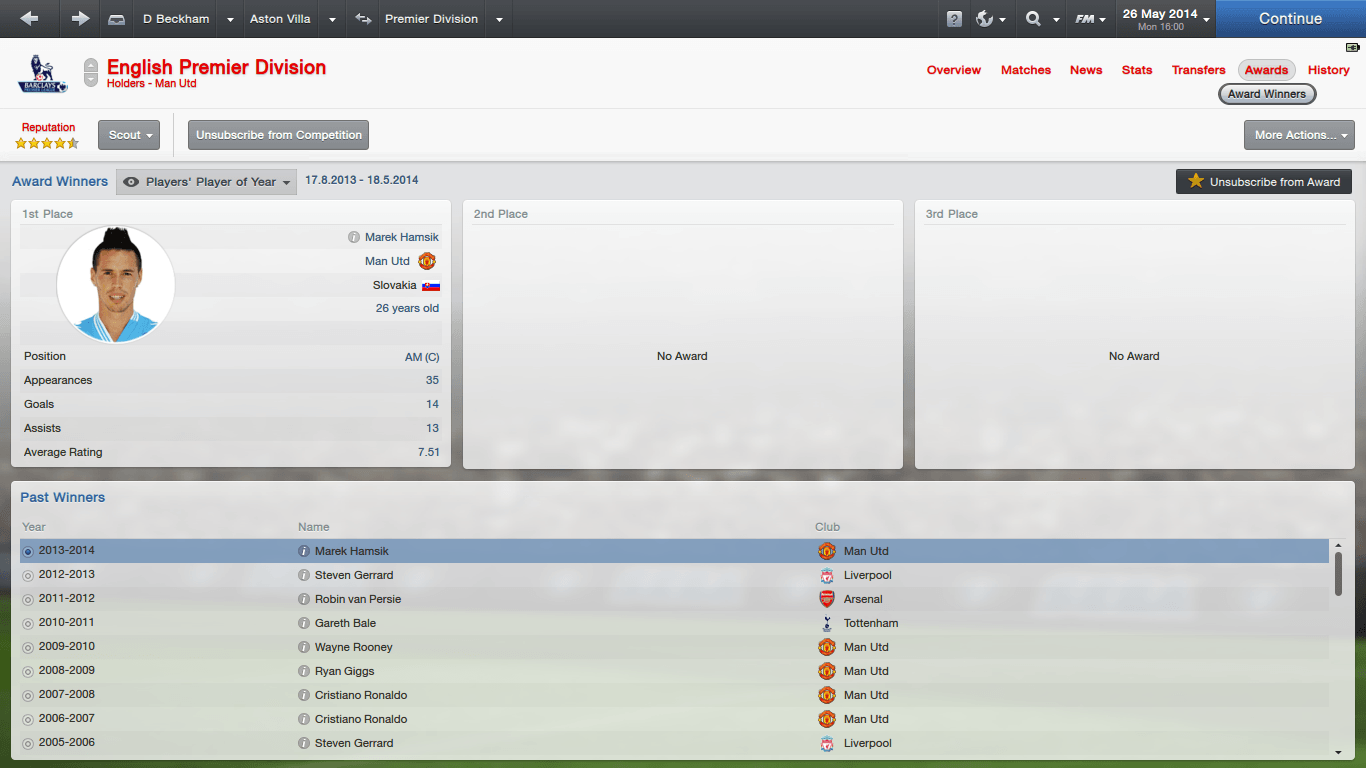 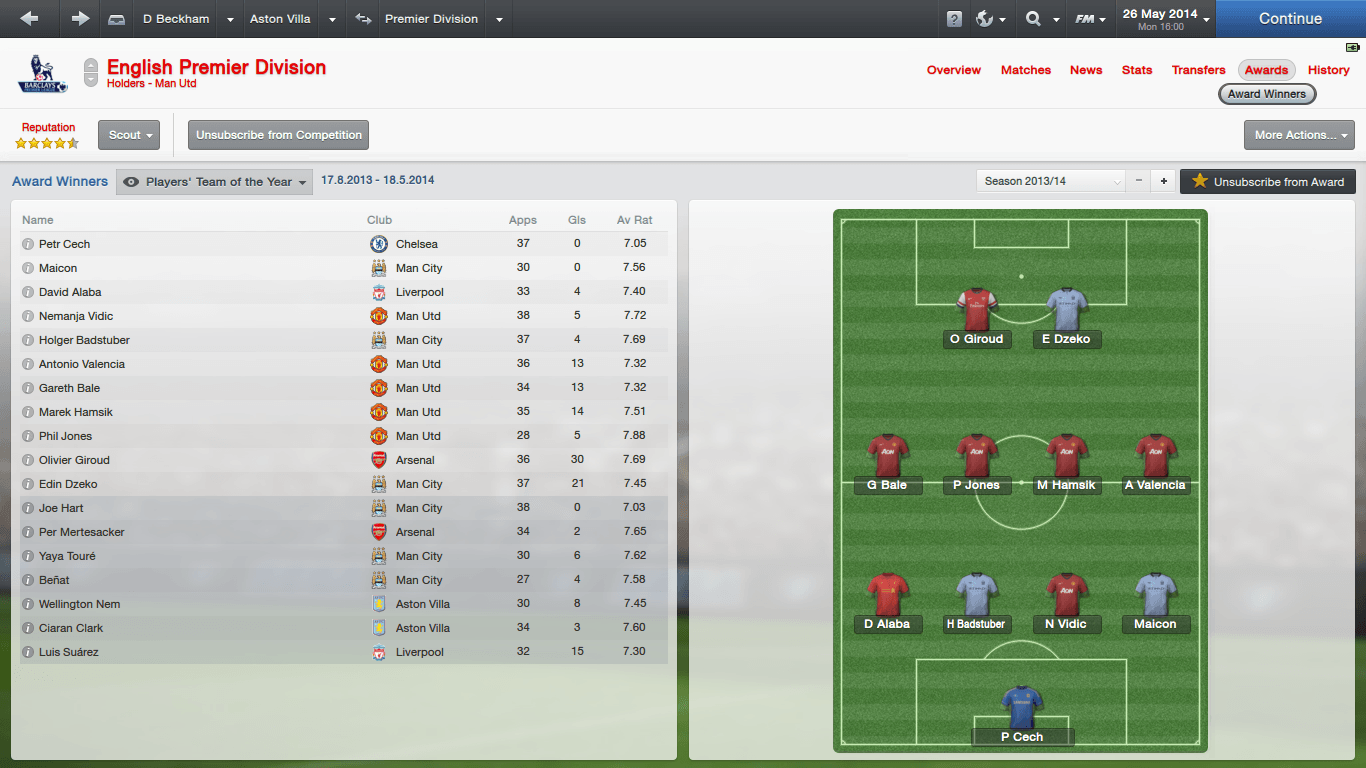 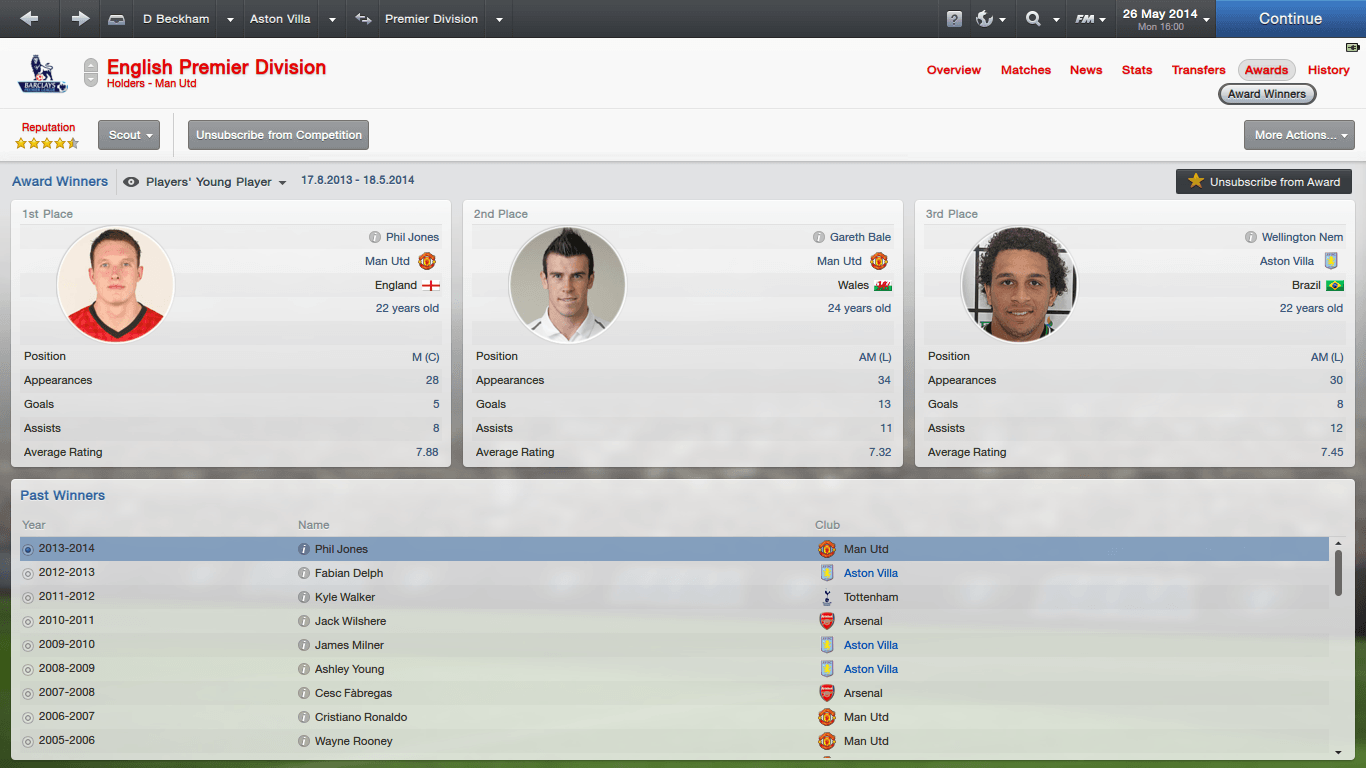 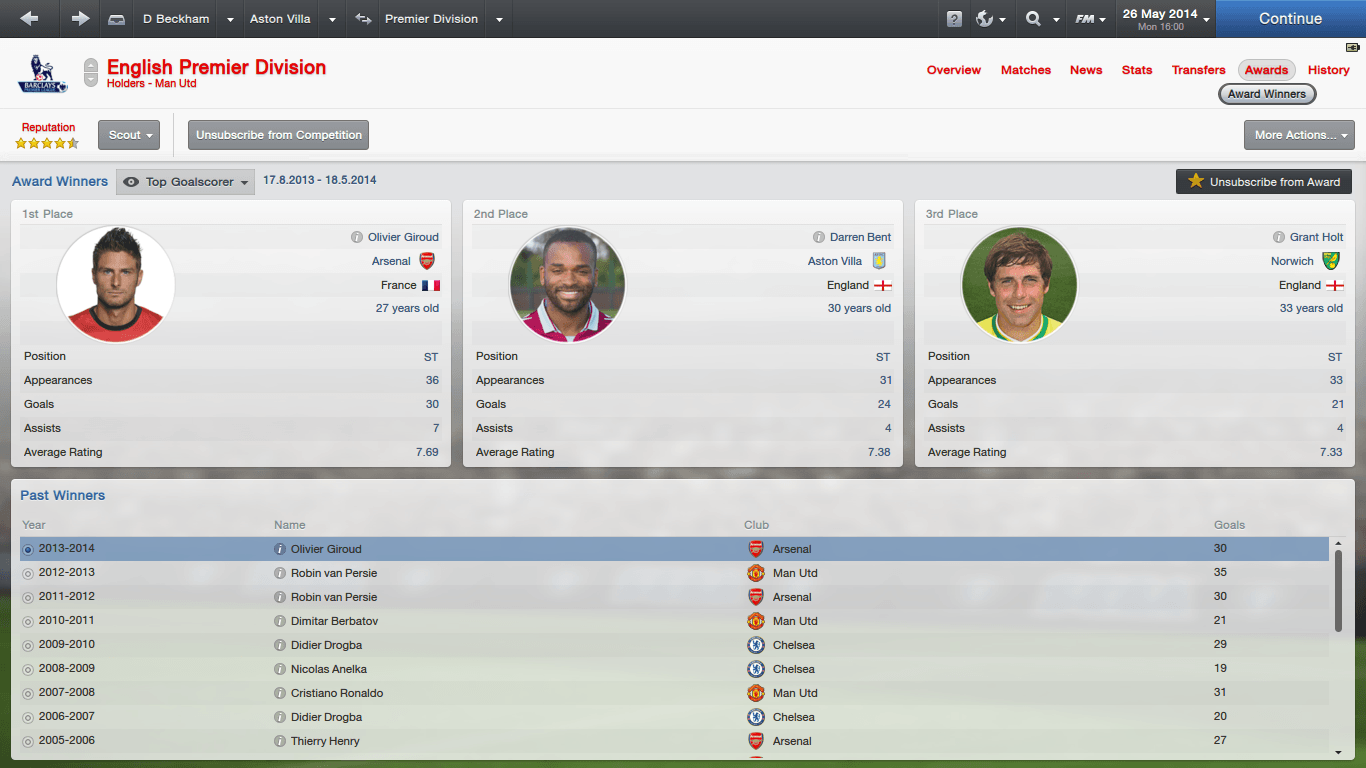 David Beckham has come out to talk to the media on his opinion of Aston Villa's season.

"It wasn't the greatest season," he said. "At least, that's what I think. But when I look back, especially how we did the season before this, I really can't complain. Hopefully we can build on this 8th placed finish.

"It was disappointing to miss out on the FA Cup, yet, it was brilliant to have gone so far into the Semi-Finals.

"It was disappointing to miss out on European qualification, but we beat teams like Chelsea, Liverpool, Everton, Manchester City and Tottenham. We crushed Manchester United 4-1. Those are some bloody amazing results."

The Villa team had their share of success this season... ... as well as disappointments. However, as Beckham said, the Villa fans have not much right to complain, especially comparing this season to recent ones.

Beckham also revealed that the Villa fans were "fantastic" throughout the season.

"I really like the fans here at Aston Villa," he admitted. "They are passionate and loud, and they really spur on the lads during games. They came to every match with a passion for their team to win. I think their screaming was what helped us during those unbeaten runs we had.

"For this, I cannot thank the fans enough."
Login to Quote

Roy Hodgson has today announced his final 23-man England squad for the World Cup 2014 in Brazil, cutting out 7 unlucky players from his 30-man preliminary squad.

Jer
8 years
1 player from Villa! Yay! Heheheheeh. Unlucky to lose in the FA Cup and miss the EL. Hopefully, you can challenge up to CL or a secure EL spot. Villans FTW!
Login to Quote