Glory of the Cup 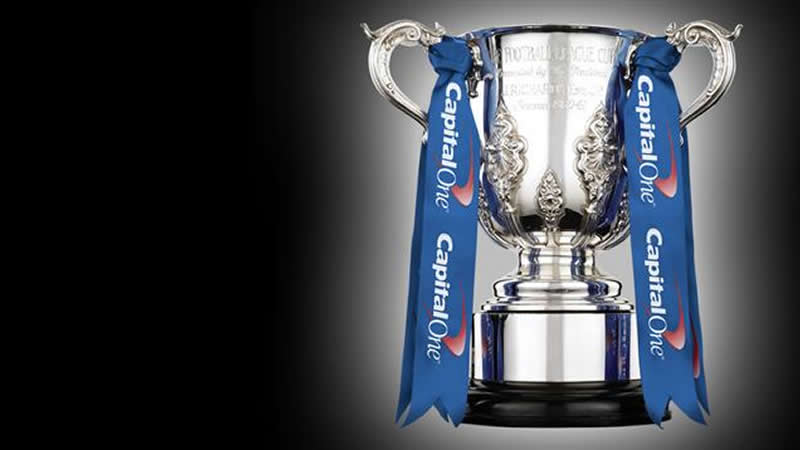 Aston Villa have won the Capital One Cup with a 4-2 win over Norwich in the Final.

Wellington Nem, Carlos Fierro and Xabi Alonso struck for Aston Villa for them to bring home the cup. It has been a brilliant win for Villa, especially having lost to Manchester United 1-0 in last year's Capital One Cup Final.

"We will bounce back" were the words from David Beckham after last year's loss to United and they certainly have done that. Besides Capital One Cup glory, Beckham's Villa team are 5th place in the league, ahead of Arsenal and Liverpool.

"It was a fantastic run," said Beckham. "And now we've done it. We've won the cup," he said in his post-match interview.

The win of the Capital One Cup will certainly ease any negative feelings still remaining over Aston Villa's kickout of the FA Cup after suffering defeat at the hands of Chelsea in the Fourth Round.

Popular fan forums have heaped praise on Beckham and chairman Randy Lerner has also released a statement expressing his delight with the English manager's work.

With the win of the cup, Aston Villa have booked their ticket to next season's Europa League campaign, and it will be their first time securing back-to-back European qualification since the reign of Martin O'Neill.
Login to Quote

Arvind
9 years
Congrats on the cup and on Europa qualification. Maybe next year you'll finally get it through the league?

Glenn T
9 years
Thanks for the nice comments Blue!

Playing like champions, that's what David Beckham's Aston Villa team are doing at the moment. They have gone through the entire month unbeaten in both the Capital One Cup, the Europa League, and the Premier League. The highlight of the month is definitely winning the Capital One Cup, as well as knocking Valencia out of the Europa League with a 7-3 aggregate win. Villa are also 5th in the league, and looking very close to securing a Champions' League spot... 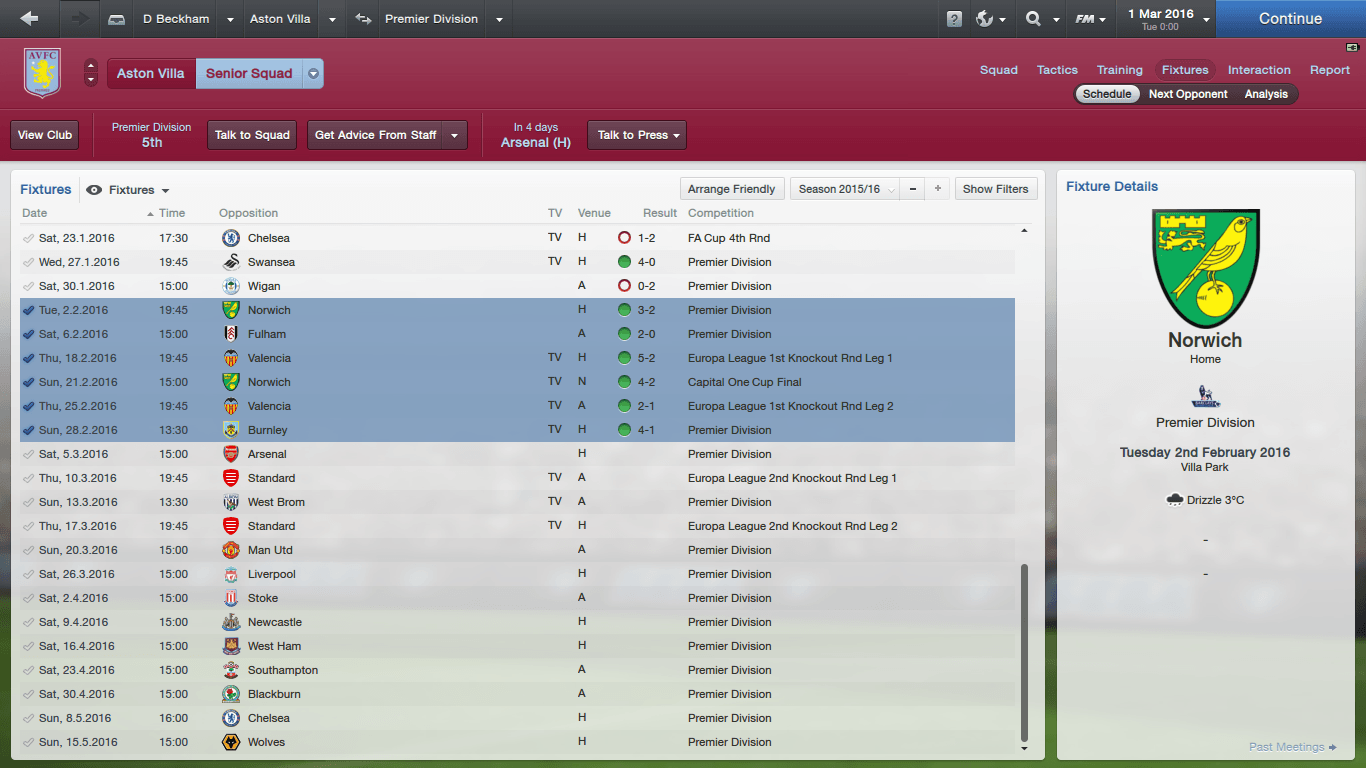 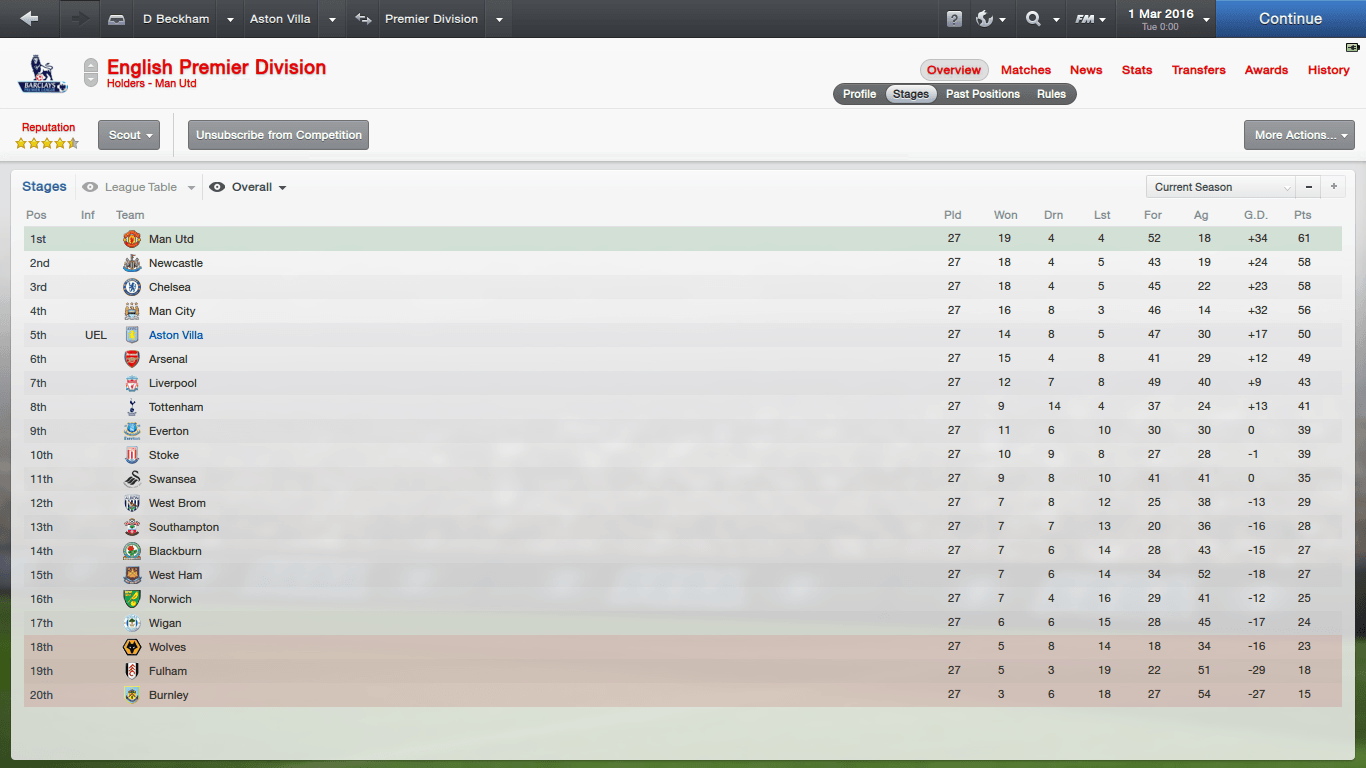 Man City's Kwadwo Asamoah won the Player of the Month award, but Carlos Fierro and Wellington Nem were certainly close to the award as well. 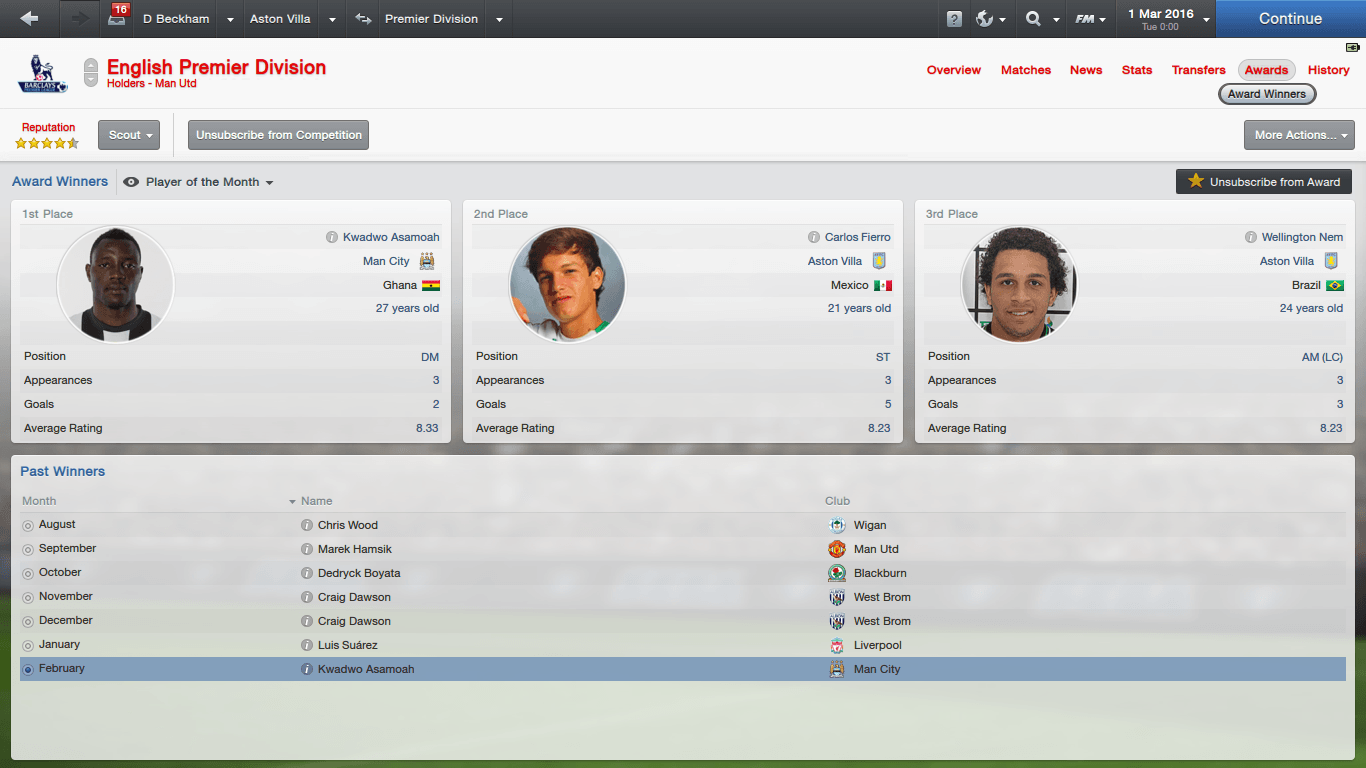 On the other hand, Fierro has won his third Young Player of the Month award since coming to England. John Romero is not far off in 3rd place after making a successful comeback from injury. And lastly, David Beckham is in 3rd place for the Manager of the Month after his amazing results, only bested by Chelsea's Frank de Boer and Stoke's Tony Pulis. Dunno how you have done it but your team is absolute quality! 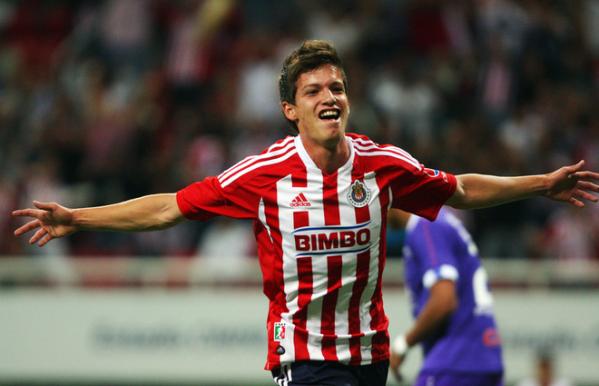 Aston Villa forward Wellington Nem has came out to the public to heap praise on teammate Carlos Fierro.

The Mexican international has taken over the previous roles of Darren Bent and Christian Benteke as Aston Villa's most dangerous striking threat. Despite having only scored 13 goals in the Premier League, he has scored a sensational 28 in all competitions and Nem, who has been at Aston Villa since 2012, is delighted to be his teammate.

"I have worked with strikers like Darren (Bent) and Christian (Benteke)," said Nem. "But Carlos has to be better than them all.

"I am not saying Darren or Christian were bad. They were very good here for us at Villa. But in my opinion, Carlos is more than good. He is simply superb.

"In two or three seasons he'll have a better scoring ability than Darren had while he was here. It's simply exciting to watch him."

Nem and Fierro have combined to push their side up into 5th in the Premier League. 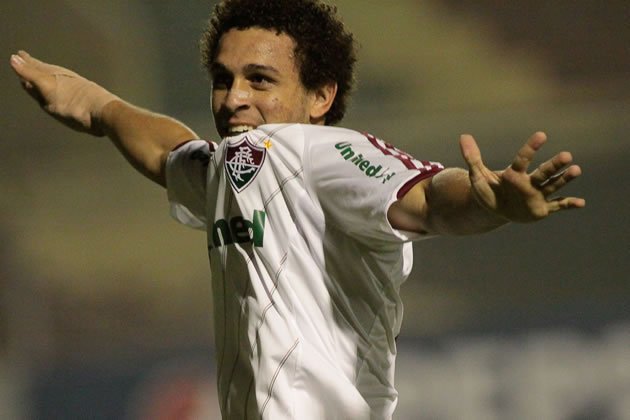 Aston Villa manager David Beckham has also credited his two star players for the climb up the league table.

"Carlos and Nem work very well together and I'm glad they do. They're a killer partnership and it'll be exciting to watch them both develop."

Fierro and Nem will be looking to continue their successful goal-reaping partnership next week, when they play Arsenal at Villa Park.
Login to Quote

Aston Villa's Miguel Marques is a young Portuguese 19-year-old who can play at both defensive midfield and central midfield, and to a certain extent, a central defender. Currently a Portugal Under-21 international, Marques has a bright footballing future ahead of him and although commonly plays for the Reserves and Under-18s, has been constantly used as a substitute in the senior team's Premier League campaign this season. 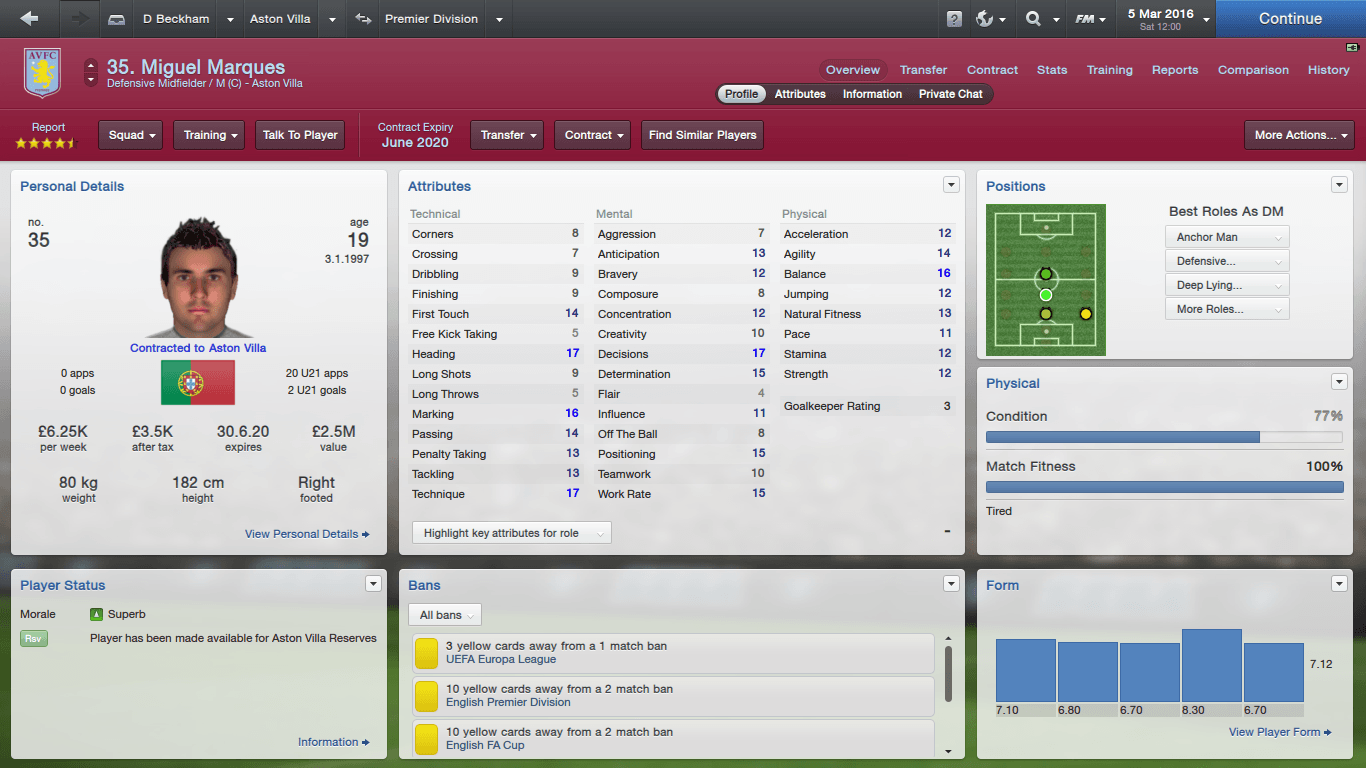 Marques began his career at Atletico CP, who play in the second division of the Portuguese football league. Recognized as one of the best footballing talents Atletico has produced in recent years, he soon attracted the interest of various European clubs with his superb showings in the Atletico Reserves and Under-18s squad.

Aston Villa eventually won the race to sign Marques and with Atletico in debt, allowed their best talent to make the trip to England for a fee of just 90k. Marques linked up with Villa in August 2013 and was quickly promoted to the first-team for a debut match against Cardiff City that unfortunately ended in a 1-0 loss.

Although officially registered in Villa's Premier League squad that season, Marques more frequently turned out for the Aston Villa Reserves and Under-18s, and enjoyed much success at youth level. He ended his first season at Villa Park with 3 league appearances.

By the next season, Marques was promoted from the Under-18s to a full-time Reserve player after his superb showings in the Under-18s league and became a Reserve league sensation under Villa Reserves manager Gordon Cowans. He was soon joined by Portuguese compatriot Luis Goncalves in August 2014, who came in from Vitor Setubal.

The two Portuguese youngsters soon forged an understanding in the Villa Reserves midfield that stormed the Reserves league.

On the side of the senior team, Marques finished the 2014/15 season with 6 Premier League appearances, an improvement from last season's 3.

Marques has been constantly used as a bench player and has made 8 league appearances so far this season. He was also involved in the 7-3 aggregate thrashing of Spanish side Valencia in the Europa League.

It is safe to say that Marques will not be leaving Aston Villa any time soon, and if anything, will soon be becoming a first-team player of the club with his vast improvements.
Login to Quote