Jozef
9 years
Good decision. £2 million profit could do some good.
1
Login to Quote


Pedophile isn't an incorrect term either

Jamesg237
9 years
You seem to be doing quite a big rebuild of Aston Villa which I can see working in your favour. Xabi Alonso's experience will be great for you.

Keep it up Glenn. A great great story that everyone should try to emulate!
1
Login to Quote

Keep it up Glenn. A great great story that everyone should try to emulate!

Everyone should emulate yours too

Thanks Jamie!
Login to Quote

Jer
9 years
Have you read the other Villa story by Jason? It's great, but yours is better by a lot! Does it mean that this is a brother story with Leamington Breaks?
Login to Quote

The other Jason had much more success with Villa than Glenn

I don't know, but JasonVilla just wanted to interview me about it to make his story a bit more interesting, and I agreed and also put it on my story

And thank you! It's awesome to know that someone thinks my story is better than a story on FM Scout that I consider 'one of the greats'.

The other Jason had much more success with Villa than Glenn

Return to Europe I

Aston Villa made an astounding return to the knockout stages of a European cup competition today as they crushed La Liga side Valencia 5-2. 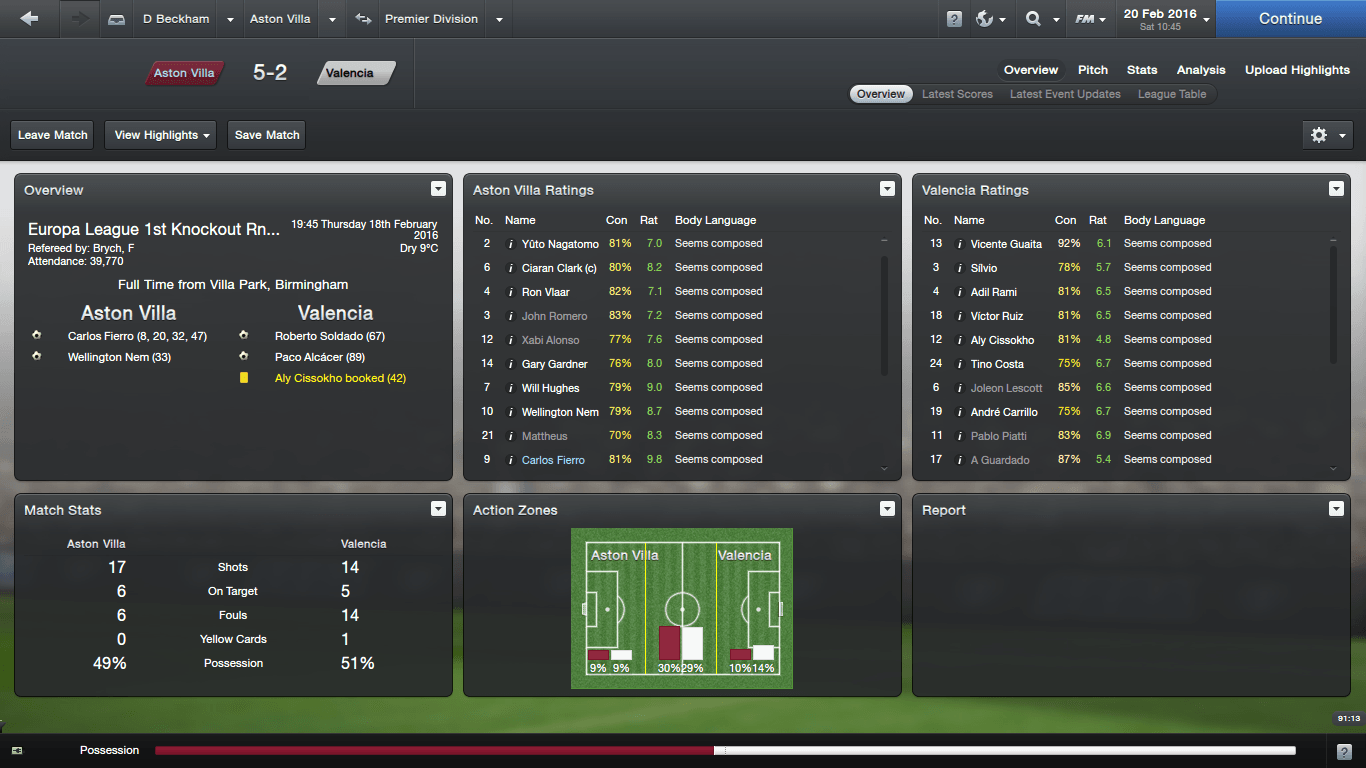 4 goals from Carlos Fierro and 1 goal from Wellington Nem helped the Villans' cause, although some poor defending from John Romero, his first game since coming back from a lengthy leg injury, and a mistake by Jack Grealish allowed Valencia to score 2 away goals through Roberto Soldado and Pablo Alcacer, something that could come back to haunt Villa in the second leg of the round.

Fierro struck early in the 8th minute, and then the 20th minute to make it 2-0 for his side, and completed his hat trick swiftly in the 32nd minute. Nem struck just a minute later.

Aston Villa's Mexican danger proved a constant threat to the Valencia defenders and still felt ready to go after half-time with a fourth goal in the 47th minute. Soldado and Alcacer struck in the late minutes of the match to provide Valencia with some hope of rescuing their disastrous result in the second leg.

Aside from Fierro, Villa keeper Samir Handanovic was also instrumental in the match as he kept out shots that seemed certain goals. Soldado struck thrice in the opening minutes of the game but they were all punched away or saved by the former Inter goalie.

David Beckham praised his squad on their win in his post-match interview.

"The lads were brilliant out there, especially Carlos who scored 4 goals for us again today. No offense to them but I honestly expected Valencia to be more of a challenge, and hopefully they can give us that when we travel to Spain for the second leg. It is a pity we allowed them to score 2 away goals, but I'm confident we can still get to the next round if we play like we did today in Spain."
Login to Quote

Capital One Cup 2016: Road to Wembley

Aston Villa are back at the home of English football - the Wembley Stadium for a cup final. Last year, Villa lost the Capital One Cup Final to Manchester United, but this season the opposition is Norwich. Although it would do no one any good to underestimate the side managed by Karl Robinson, it is fair to state that Norwich is no Manchester United, and maybe this year Aston Villa and David Beckham can finally bring the Capital One Cup home. But how exactly did they get to the Final for the second time in a row?

Entering the competition in the Third Round, Aston Villa faced a club affiliated with their own, Swindon, but mercilessly pounded the Robins 5-2 with goals from Lampard, Kaka, Vlaar, Nem as well as Fierro, with the latter scoring in his first ever appearance in an English cup competition. 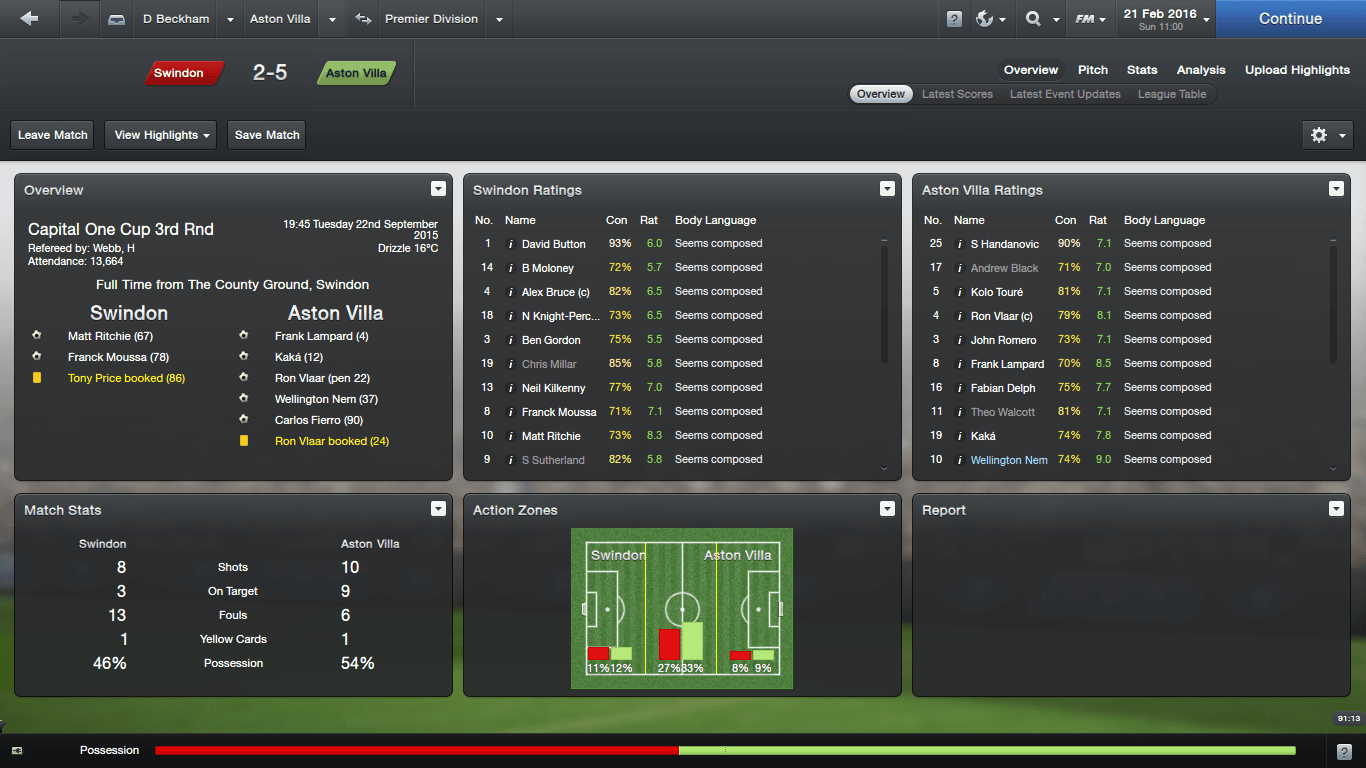 It was a brilliant Fourth Round match for Aston Villa as they crushed expected winners Chelsea 3-0 with an unlikely hat trick from Mattheus, the standout player of the match. This match is also credited as "Mattheus vs Chelsea", and ever since this win, Mattheus has been playing well every time he is picked to go up against the Blues. 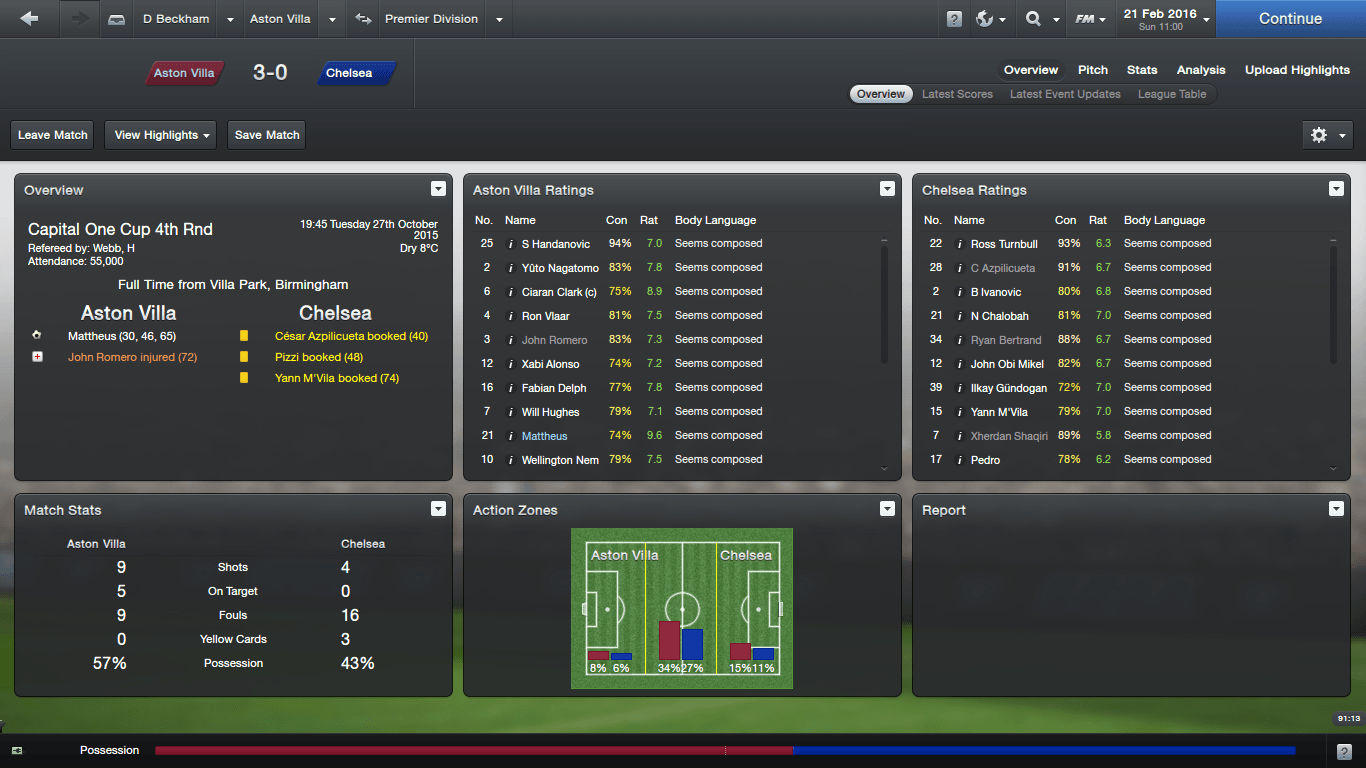 Though not at their best, Aston Villa still beat Queens Park Rangers 2-1 at Loftus Road to advance into the Semi-Finals. The Championship side put up a great fight with Anton Ferdinand defending brilliantly for the Hoops. However, Wellington Nem proved to be a better threat as he worked efficiently with fellow Brazilian, Mattheus, for him to score a brace, bringing his tally of Capital One Cup goals up to five after his hat trick against Chelsea. 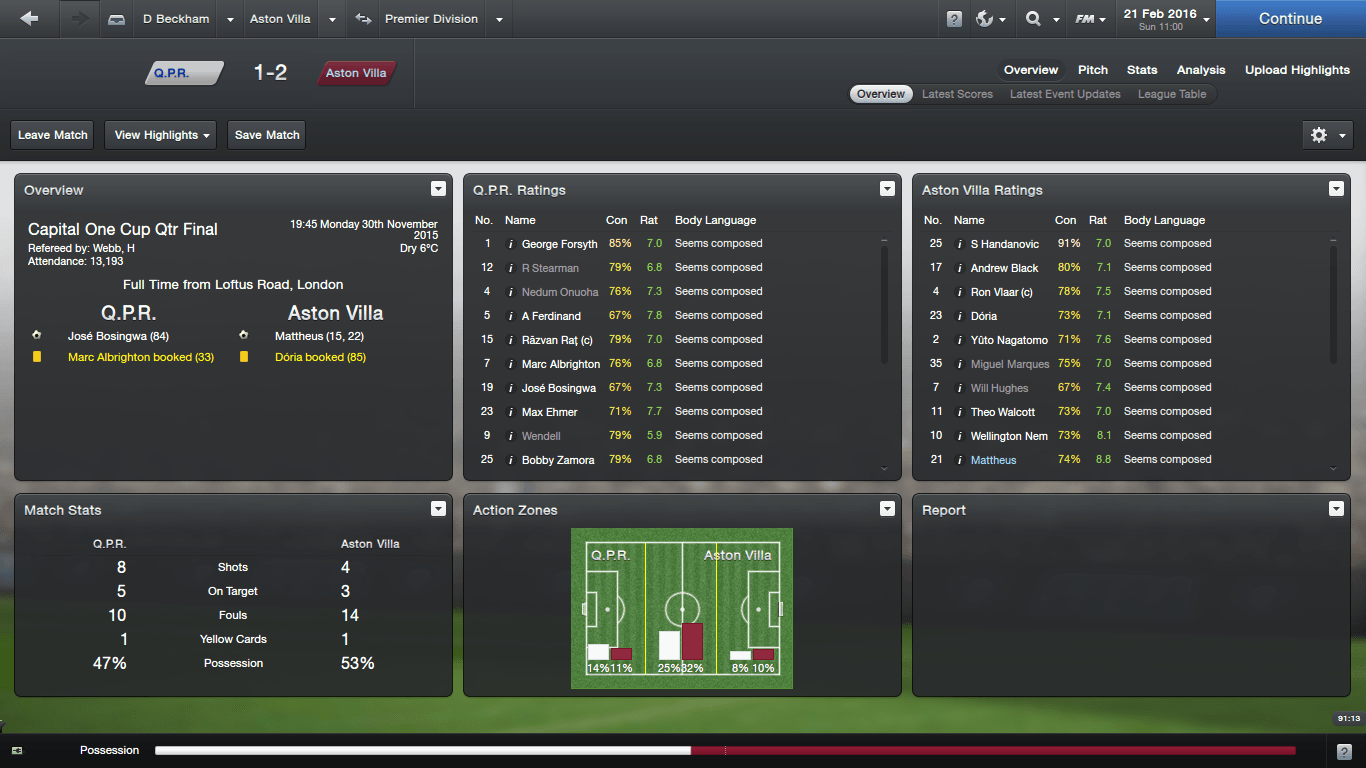 It was another field day against a London club in the Semi Finals for Villa, as they crushed Tottenham in a crazy 7-1 win that had Villa fans cheering and going into raptures. The two sides met in the competition last season, but in the Fourth Round with Tottenham eventually being bested 1-0 by the Villans. Beckham's side has shown how much they've improved since then, with goals from Xabi Alonso, Fabian Delph and a fabulous four-goal rampage from Carlos Fierro. 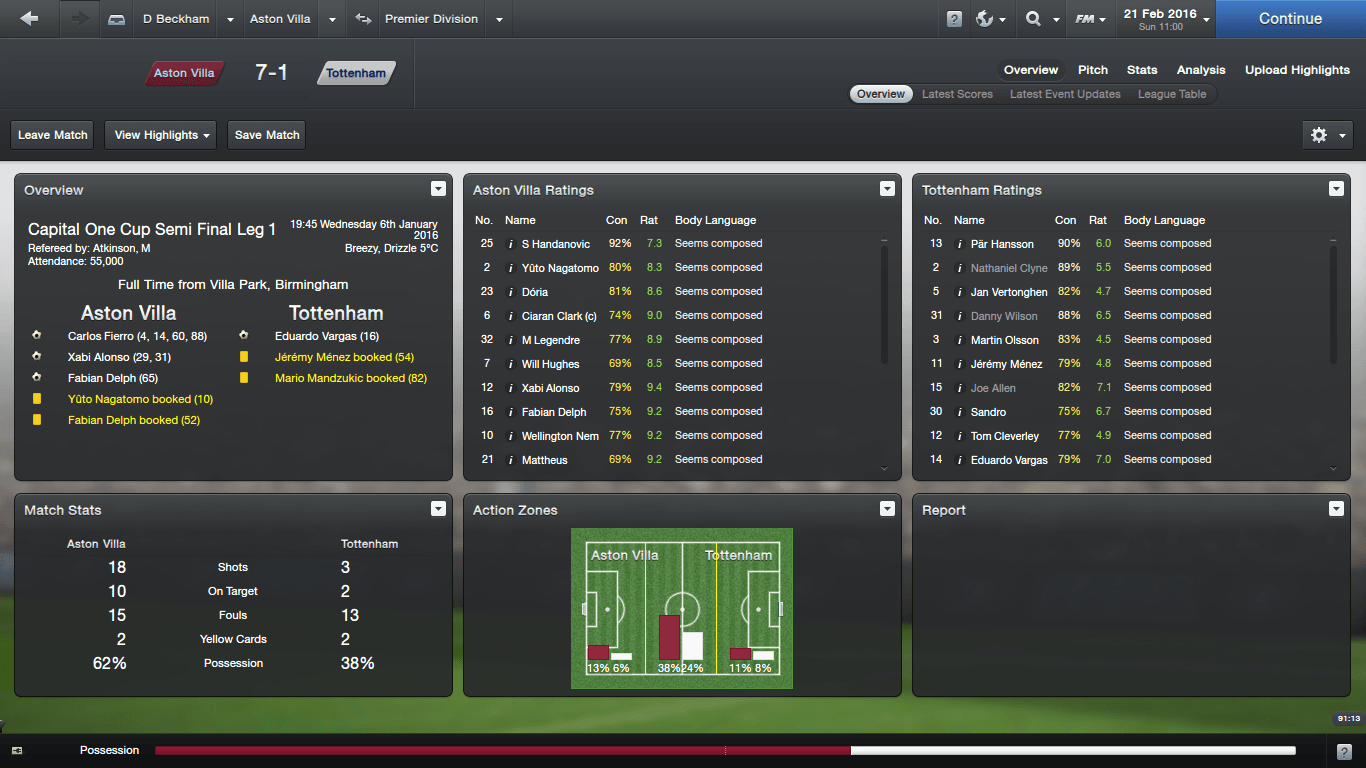 The Spurs stepped up their game in the second leg as they battled to a 2-2 draw with Aston Villa at White Hart Lane, but it was too late with Fierro and Delph wrapping up the game for Villa to send them through to the Final. On the bright side, fierce rivals Arsenal were also beaten in the Semi Finals against Norwich, so Spurs fans will at least feel somewhat better. 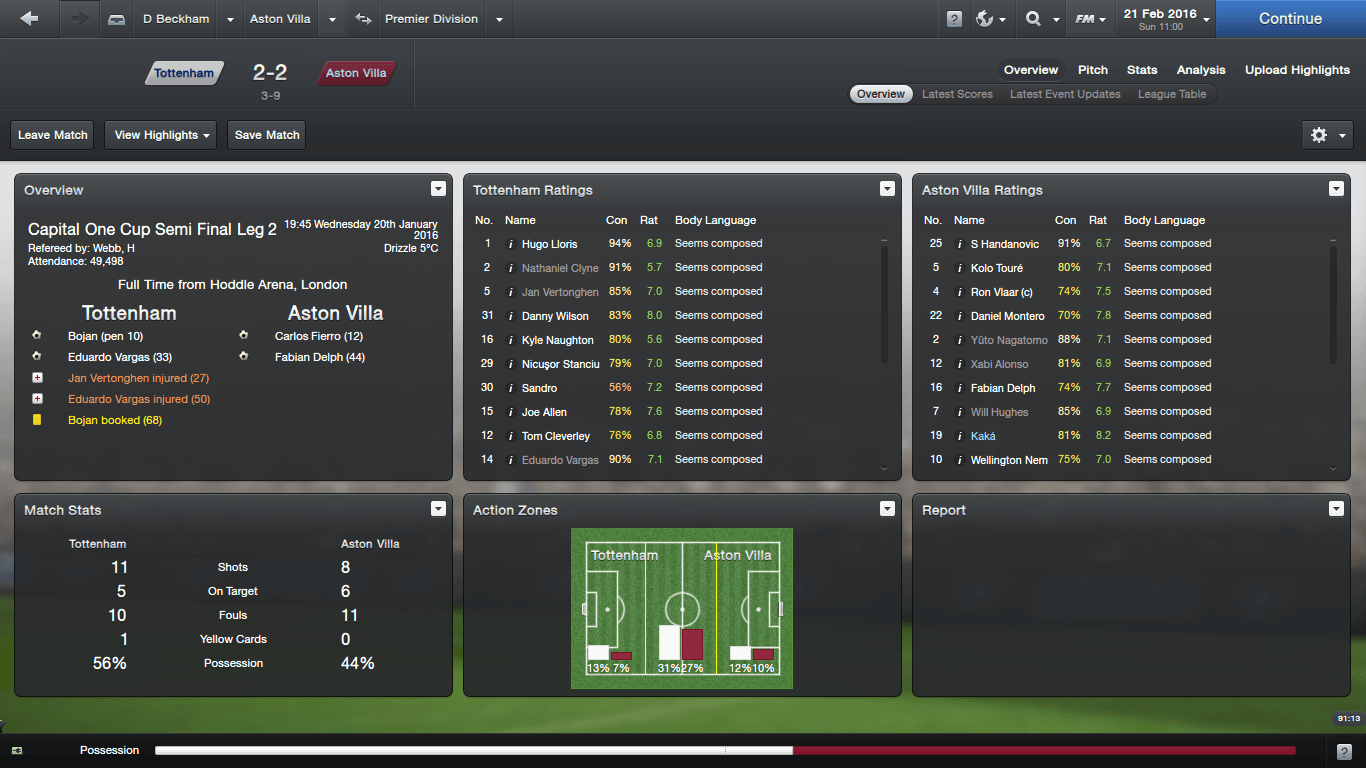 And just tomorrow, is the moment of truth. Can Beckham bring another trophy to Villa Park? Or will Norwich play like they did against Arsenal...? Remember to tune in for the Capital One Cup Final! 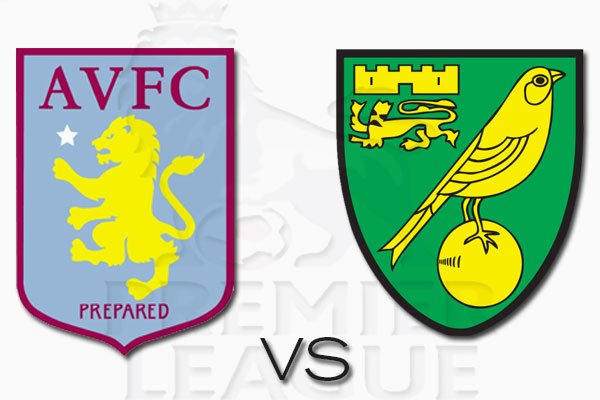 Shanked
9 years
OMG what a performance from Fierro! Good luck in the final Glenn.
1
Login to Quote

Louis O.
9 years
Nice results again Glenn! You could have beaten QPR By more but nobody really cares cause you won anyway.
1
Login to Quote 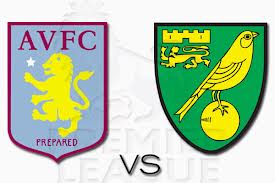 Martin Tyler: Good day, everyone. It's the Capital One Cup Final today! Aston Villa versus Norwich, and it'll be an interesting match indeed. Beside me here we have Villa midfielder Frank Lampard, and retired Norwich icon Grant Holt.

Frank Lampard: Pleasure to be on board, Martin.

Martin Tyler: Without further ado, let's look at the line-ups for today. 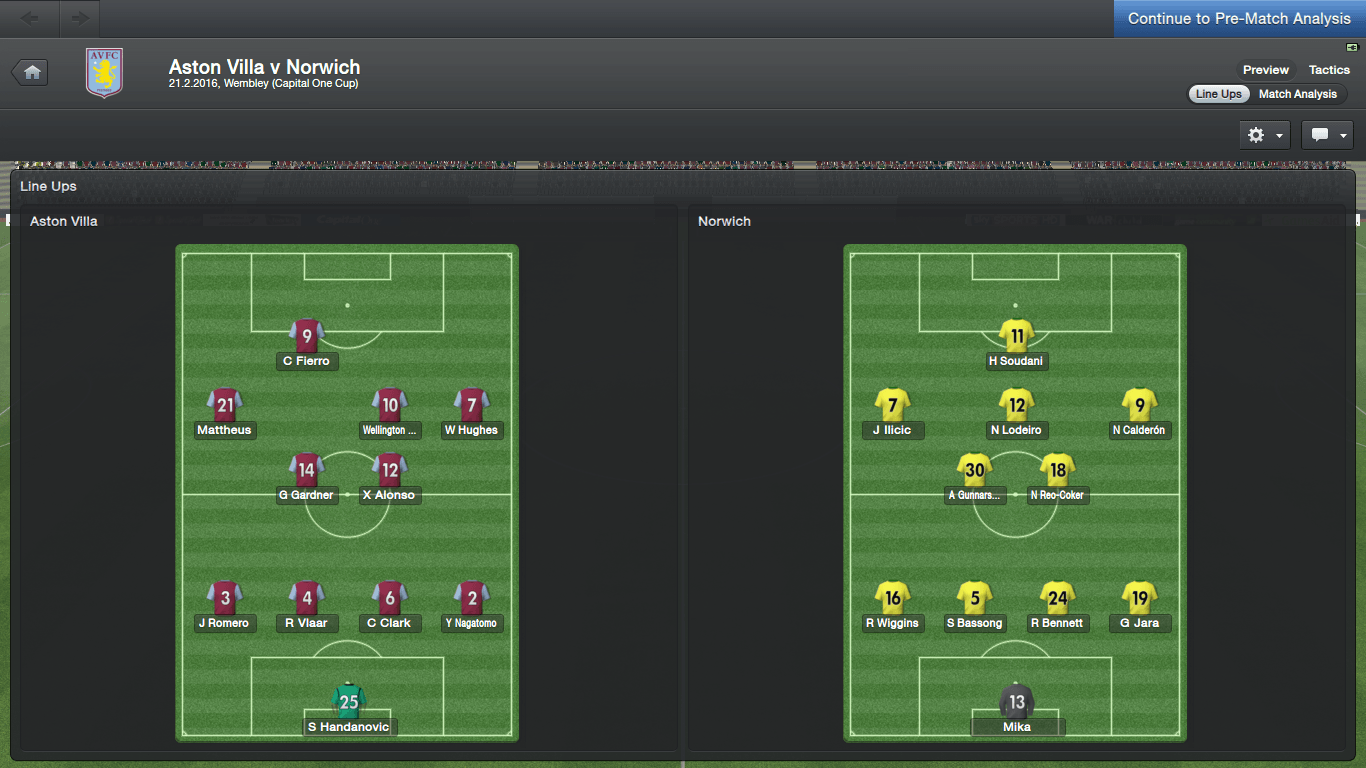 Martin Tyler: Both Aston Villa and Norwich have chosen to field very strong squads. In the Aston Villa side we have their usual first-choice Samir Handanovic, fresh from a superb performance against Valencia in the Europa League. Nagatomo, Ciaran Clark, Vlaar, and John Romero makes up the Villa defense.

Grant Holt: That's a tough defense Norwich will have to break down today. You don't normally get past someone like Clark. I'd know because I've played against him plenty of times.

Martin Tyler: Xabi Alonso and Gary Gardner make up central midfield while Will Hughes and Mattheus will attack from the wings. The ever reliable Wellington Nem will stay behind Carlos Fierro to provide support.

Frank Lampard: Fabian Delph is out of the Final with David not willing to risk him after his recent return of injury, but he's on the bench today. Back to the talk about the starting line-up, that's a midfield that can provide plenty of goals and Norwich will have to watch out.

Martin Tyler: For Norwich we have Mika between the post.

Grant Holt: Mika has been playing in the cup games for Norwich this season but I do think it's a bad move not playing John Ruddy in the Final, who is more reliable.

Grant Holt: I have no concern about that! It's a back line equal to Aston Villa's, I'd say. Ryan and Seb Bassong will be rocks in the defense today, and they could be instrumental if Norwich do win the match.

Martin Tyler: The ever-powerful Nigel Reo-Coker and Aron Gunnarsson will partner each other in midfield today.

Grant Holt: I'm a little puzzled over Gunnarsson's involvement in the squad today. Surely someone like Jonny Howson would have been a better fit with Nigel. But Gunnarsson aside, I'm happy Nigel is starting today because he can really play, especially in big games like this.

Martin Tyler: Calderon, Lodeiro and Illcic will be attacking for Norwich today behind Hilal Soudani. That's a four-man partnership that has brought Norwich much success this season, and I think it'll be safe to say they're going to be giving Ciaran Clark and Ron Vlaar some problems.

Martin Tyler: Let's get on to the match!

1' - We kick off here at the Wembley Stadium, with Aston Villa having a second shot to get the Capital One Cup. Norwich will also be playing at their best, having not won the cup since 1985.

11' - Ciaran Clark pushes Hilal Soudani to the ground, and the ref is pointing to the spot! It's a penalty for Norwich! The Villa players are protesting, with John Romero in the heat of it. It was a harsh decision indeed.

- What a save by Samir Handanovic! Soudani attempts to put it into the bottom left, but Handanovic easily punches it away for John Romero to knock it into Row Z! Brilliant save!

- What a mistake by Mika! The Norwich keeper rolls it out by mistake to Carlos Fierro, who hits it down to Will Hughes. Hughes crosses it beautifully to Wellington Nem, who strikes it past the unsuspecting Mika with ease. Norwich caught napping by Aston Villa there!

- And now it's Aston Villa's turn to commit a mistake, with Ron Vlaar heading it back horribly for Nicolas Lodeiro to latch on to it and strike the ball past Samir Handanovic for an equalizer.

- Xabi Alonso and Wellington Nem play a superb one-two ending with Alonso playing it up to Carlos Fierro, who puts the ball past Mika! 2-1 to the Villans!

45' - HT: Aston Villa 2-1 Norwich. Villa have been fantastic and they have one hand on the cup by now. They just have to keep pushing on and forcing Norwich back.

45' - We return to the Wembley Stadium for the second half of the Capital One Cup Final, with Norwich danger man Anthony Knockaert coming on for Josip Illcic.

46' - It hasn't took long for Norwich to be on the move, with Knockaert sending it high for Soudani to deliver a shot, but Handanovic punches it out for a corner.

58' - Jesus Blanco will come on for Gary Gardner.

- Soudani races into the Aston Villa goal and rounds Handanovic before shooting into the empty net! What a goal! Norwich have equalized!

68' - Villa make their last two substitutions with Daniel Montero on for Ciaran Clark and Jack Grealish on for Mattheus.

- WHAT A TIME FOR WELLINGTON NEM TO SCORE HIS 50TH GOAL FOR ASTON VILLA! The Brazilian is fed by Jesus Blanco and he scores with a fierce strike past Mika! Is that the winning goal?!

82' - Indeed, we've checked, and that is Wellington Nem's 50th ever goal for Aston Villa, what a player!

- There's no doubt about it now! Jack Grealish is dispossessed by Gonzalo Jara but Xabi Alonso gets his foot on the ball and hits it in from 30 yards! An outstanding goal! 4-2 to Aston Villa!

90' - FT: Aston Villa 4-2 Norwich. What a brightening second half! Aston Villa have won the Capital One Cup, for the first time since 1996! Another trophy to go into David Beckham's managerial cabinet, and another trophy for Aston Villa! 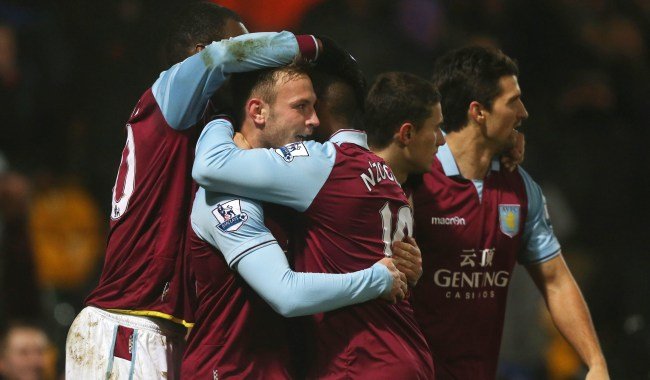 Louis O.
9 years
Well done Glenn! Another trophy and your team is looking quite good!