k1rups
8 years
Couple of good signings there Glenn. Would love to see you as England boss haha Stuart Pearce always fails in every save I have as England manager
Login to Quote 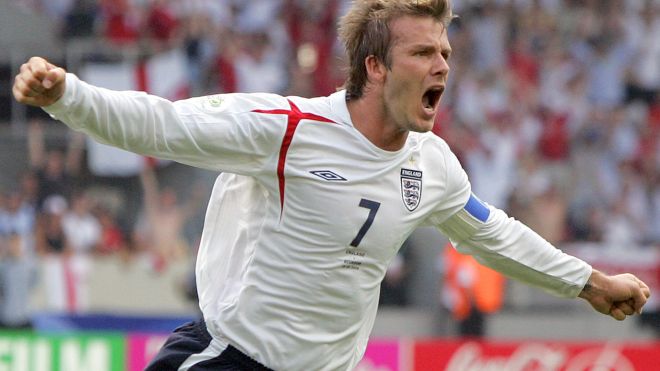 It is confirmed - David Beckham has taken charge of England.

The 43-year-old was introduced to the awaiting press earlier today at Wembley Stadium.

The former Aston Villa manager, who is also currently the boss of German giants Bayern Munich, outright admitted last week that he wanted the England job, and he has gotten it.

He has also refused to leave his post at Bayern, confident that he can balance both club and country management. 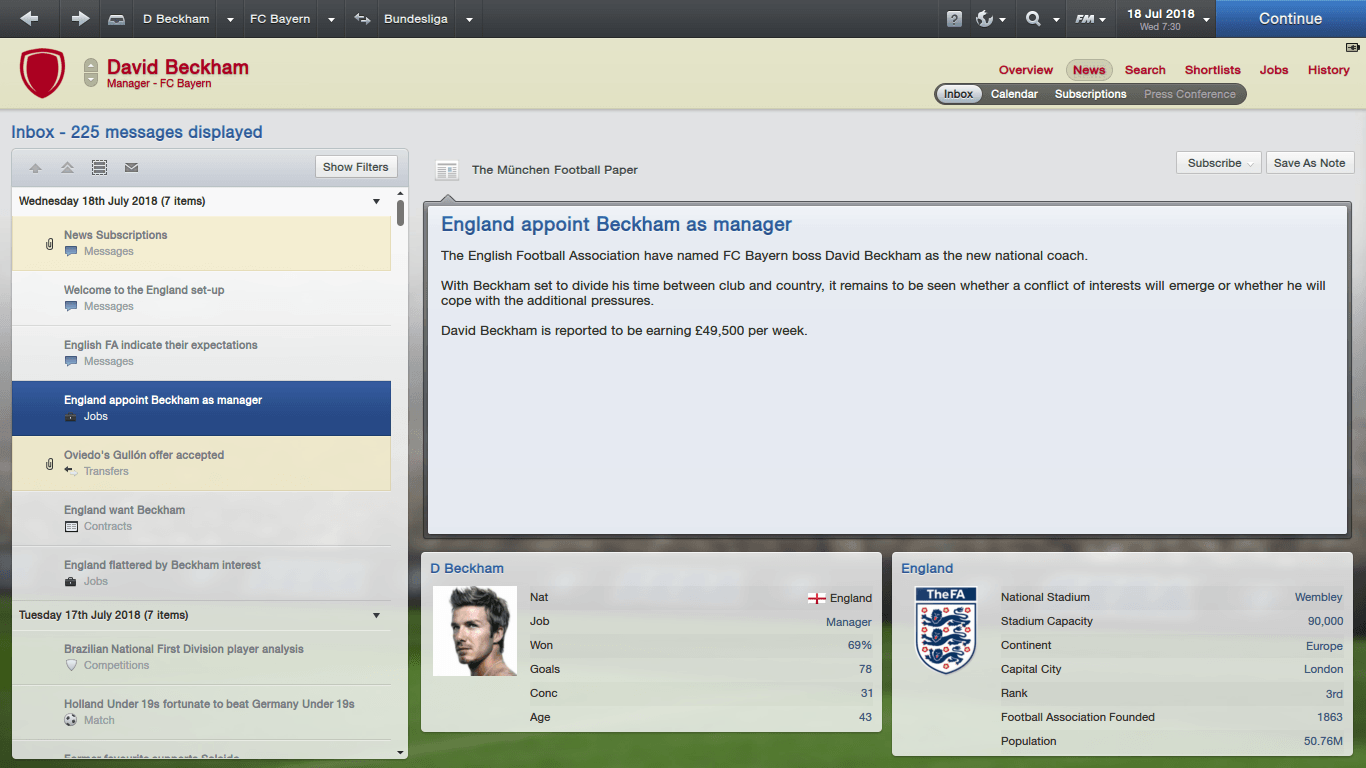 The Football Association have set a target of reaching the finals of Euro 2020 for their new manager, who is confident he can exceed their expectations.

"England won the World Cup in 2014," Beckham told journalists. "I want England to taste that kind of success again while I'm in charge. I want to make England the number one side in the entire world, and I promise I will not leave until I do."

Hughes, who has just signed a contract with Bayern Munich this summer to rejoin Beckham at the Allianz Arena, holds only 2 caps to his name for the Three Lions and although having been a key player for Aston Villa throughout the years, has failed to win an England cap since 2015.

When asked if Beckham would hand opportunities to players like Hughes, Beckham chose to remain silent over the matter, and instead said, "I will give anyone who deserves an opportunity, an opportunity."

Is it the start of a new era for England?
Login to Quote

k1rups
8 years
Yes it's the start of a new era where England don't rely on big names but on players that deserve their chance :p good luck as the manager of England and bring home the Euros trophy
1
Login to Quote

Well done Glenn for getting the England job 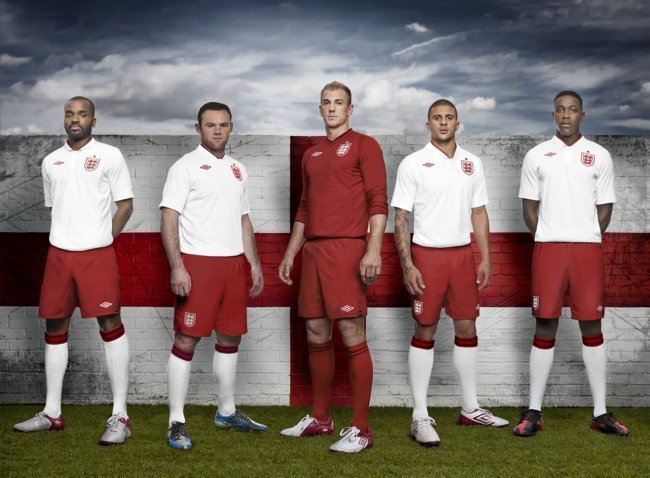 With the appointment of David Beckham yesterday, Sky Sports runs a review of the England setup that Beckham has inherited from predecessor Stuart Pearce. 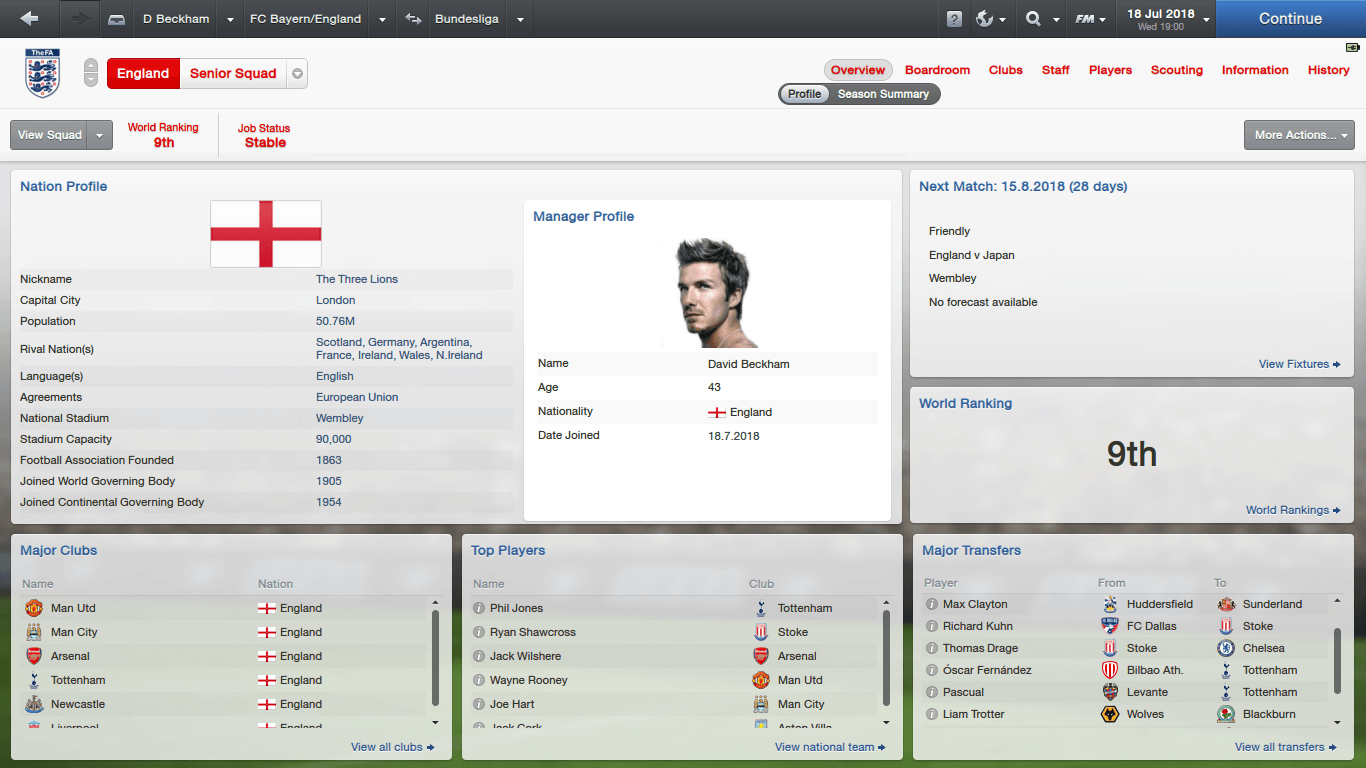 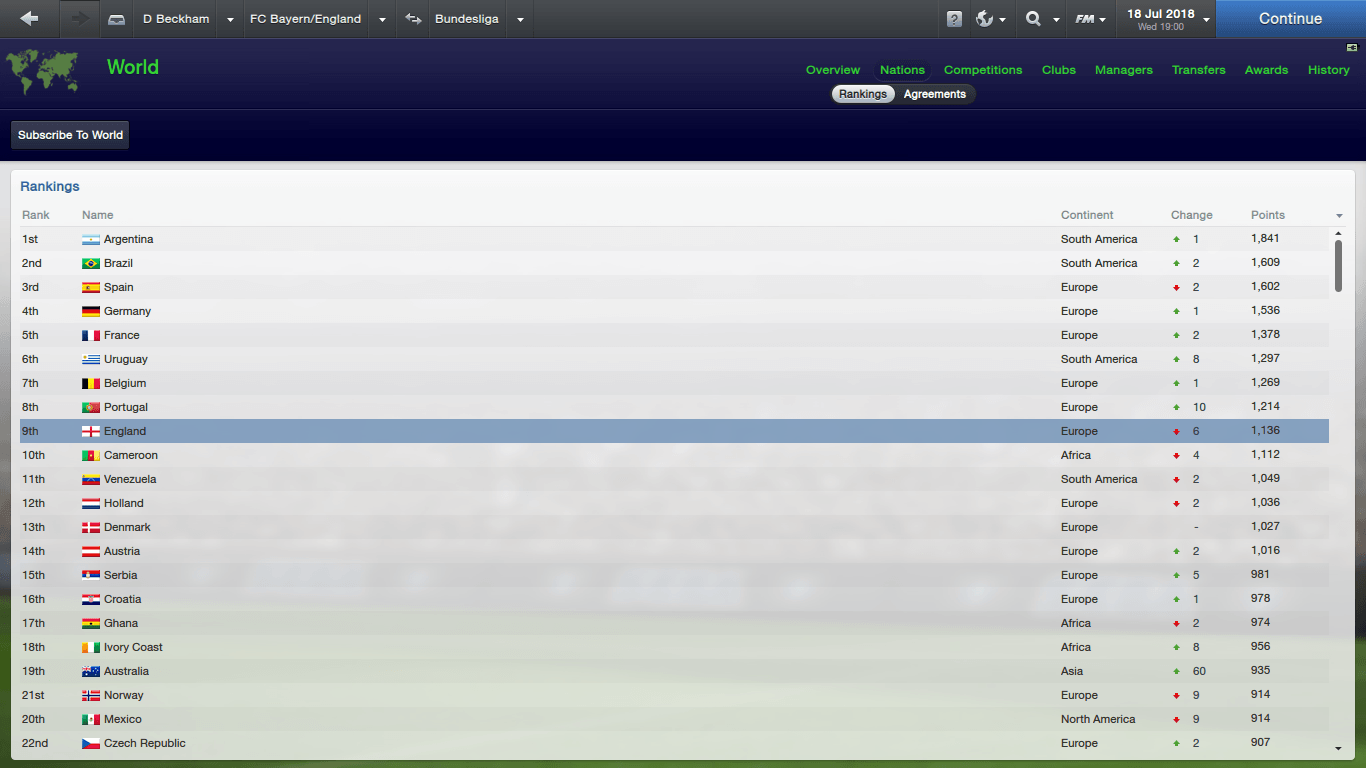 The Three Lions had ranked at 1st before dropping to 3rd, and after their poor showing in the World Cup, are now languishing at 9th. It will be a tough ask for Beckham to steer them back to the top, but everyone believes he can do it - he worked a miracle at Aston Villa, after all. 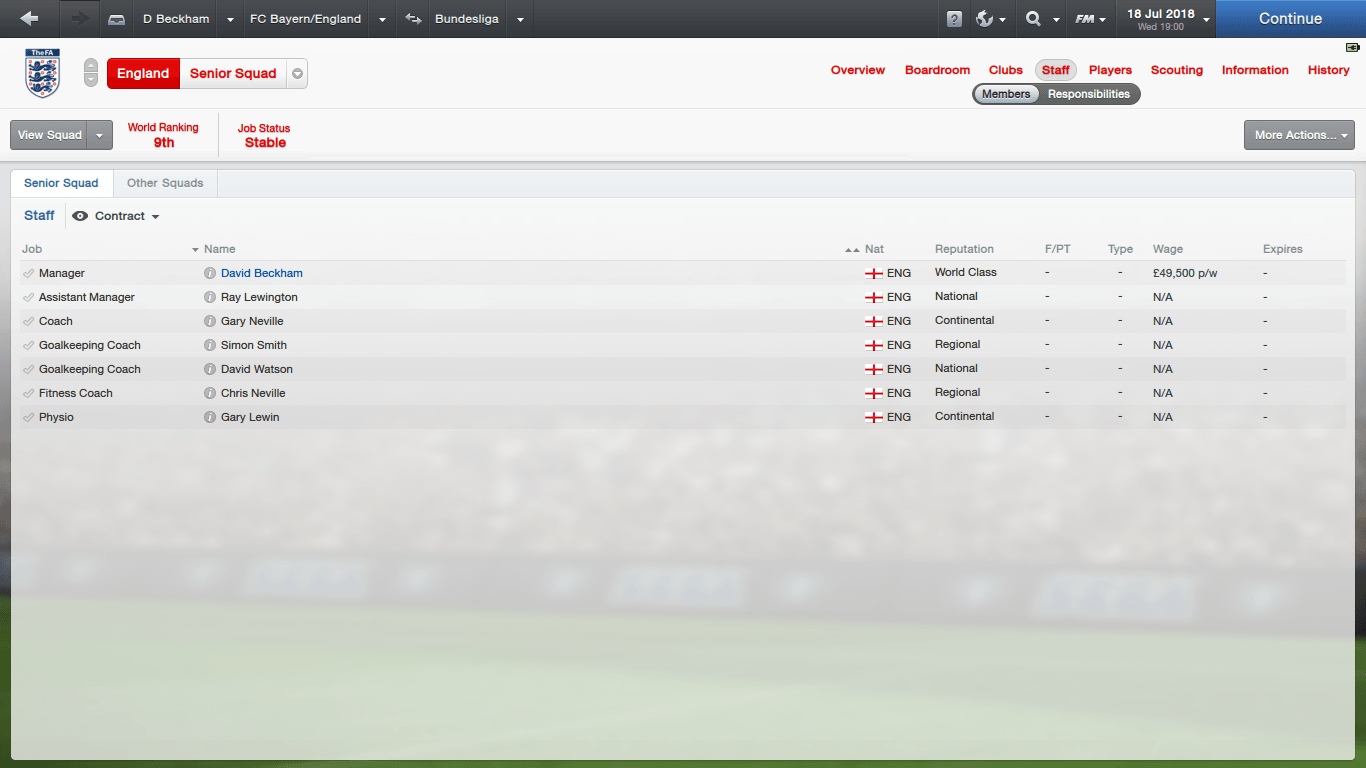 In his backroom staff he has his best friend and former teammate Gary Neville, assistant manager Ray Lewington whom he's expected to replace, as well as Simon Smith and David Watson as goalkeeping coaches, the latter also working for Manchester United in the same role. Chris Neville acts as the national team's fitness coach while they also have a world class physiotherapist in Gary Lewin. 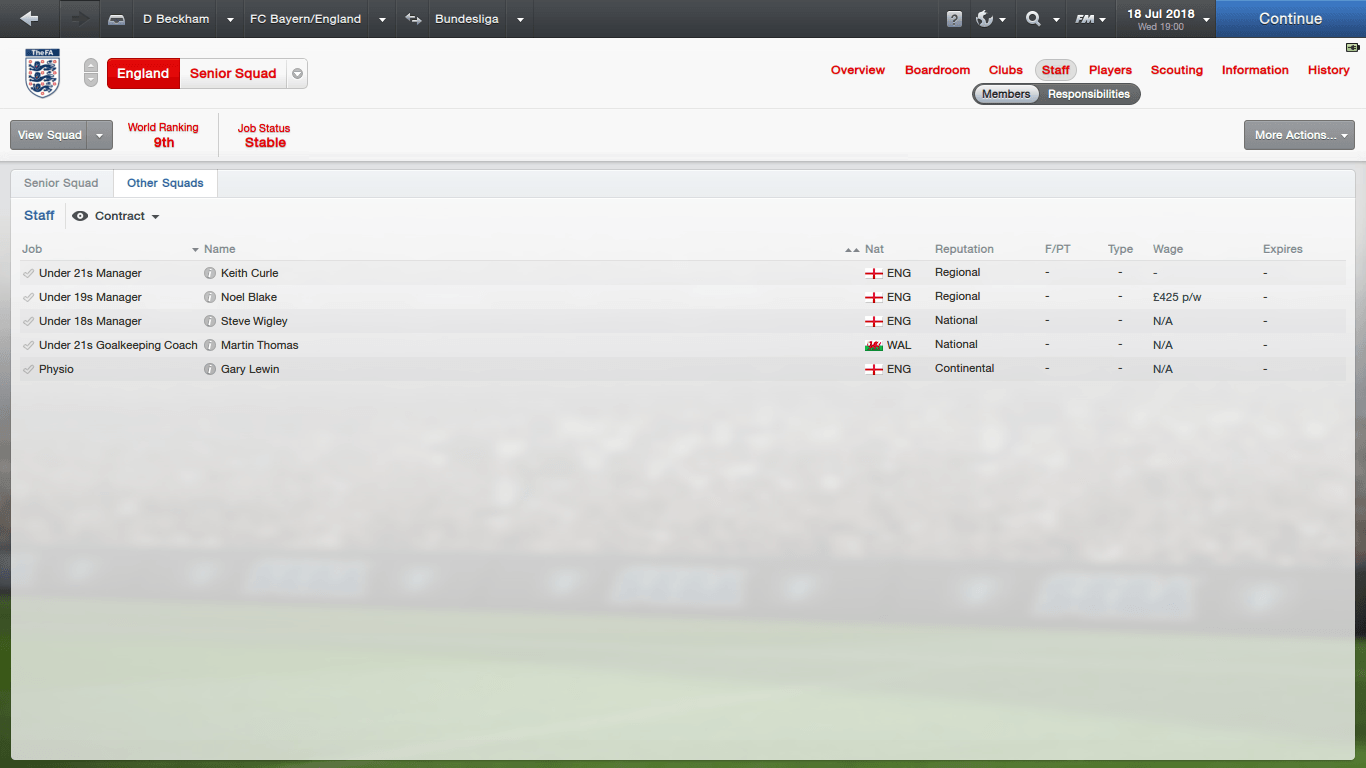 Beckham is also said to be keen on overhauling the other managers in his setup, with Keith Curle, Noel Blake and Steve Wigley all set to leave their posts as Under-21s, Under-19s and Under-18s manager respectively. 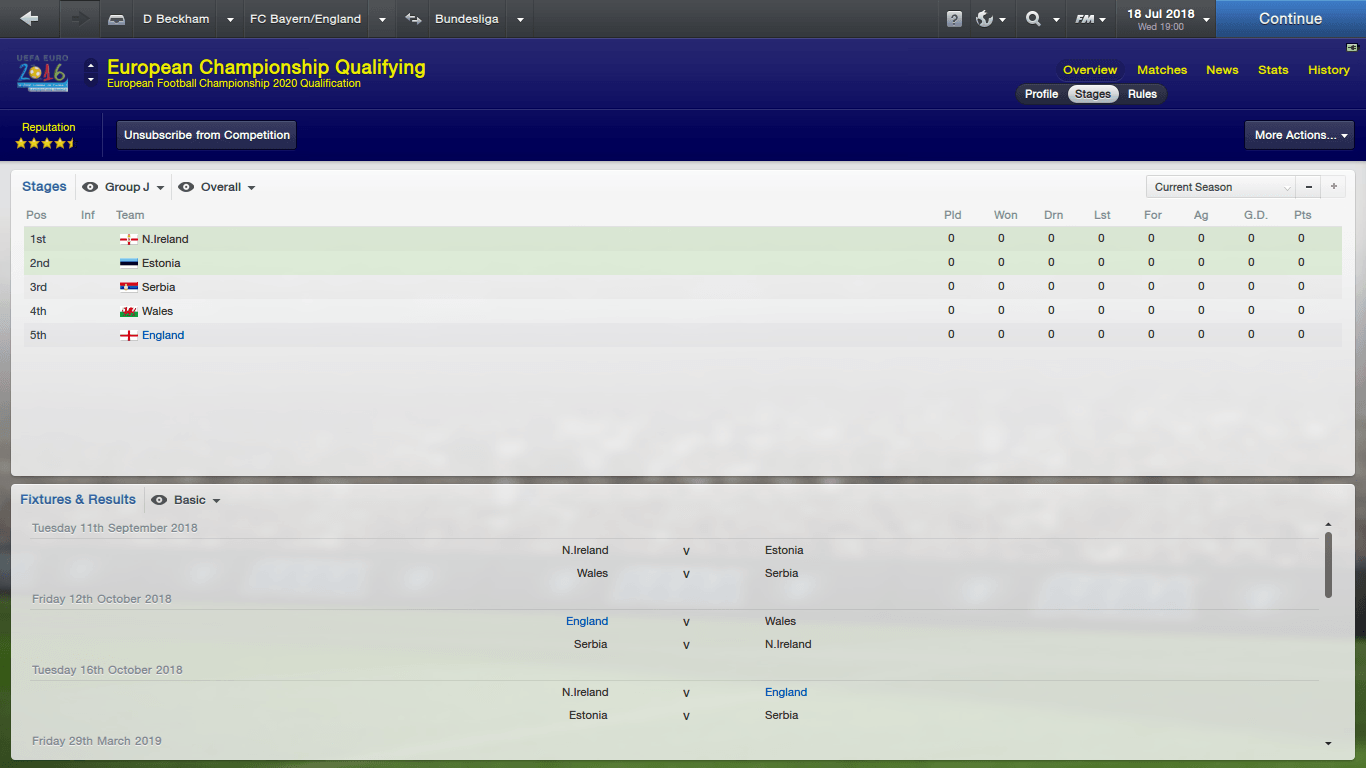 England's group will be fairly easy to top with players of the Three Lions' quality. Wales have a player to watch in Gareth Bale and Serbia have some talented men themselves. Aside from that, there should be no problem at all navigating past the other nations involved in the group.

Beckham will have quite a team of players, all hungry to win more after their early exit in the World Cup in Russia, and we here at Sky Sports have picked out four key players that we think will be vital for Beckham and England within the next few years. 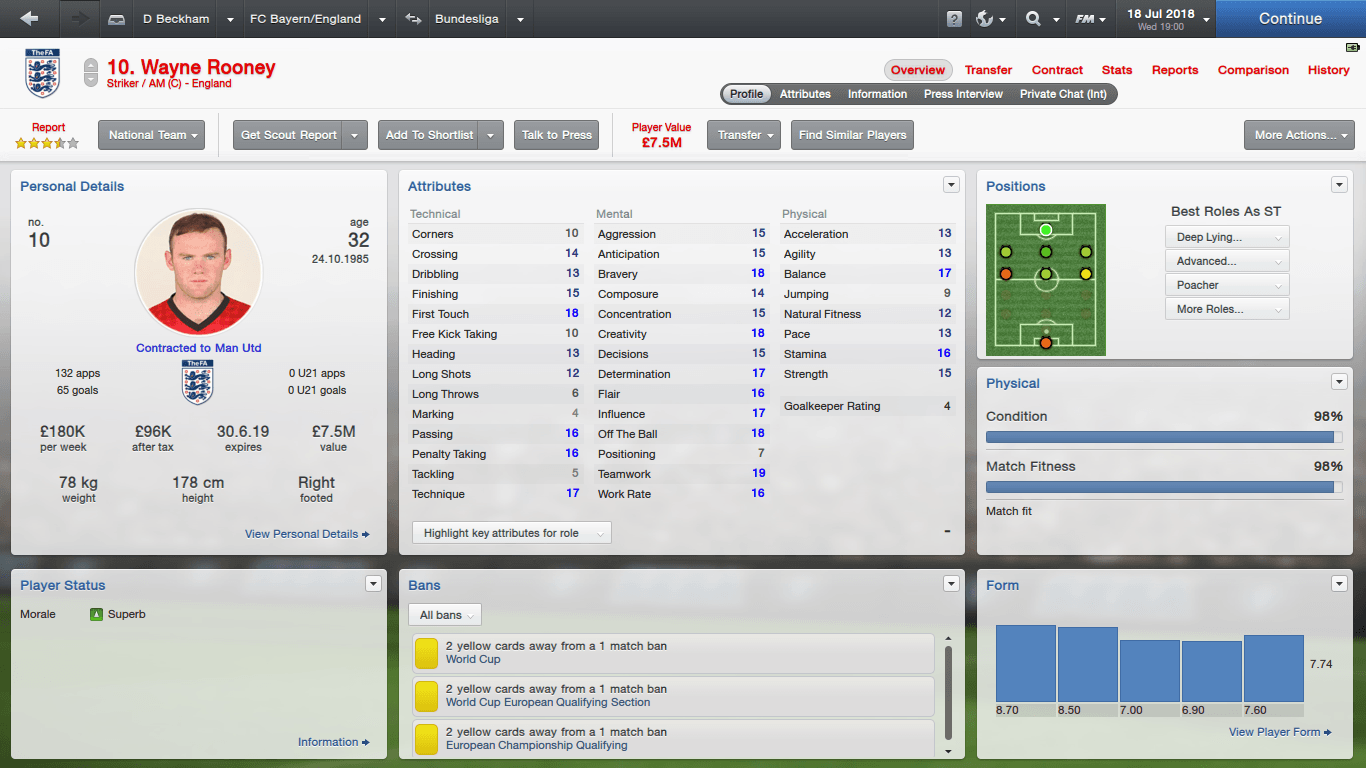 Although 32, Wazza has not lost any of his touch and has instead seemed to be getting better and better with age. Also captain of Manchester United, Rooney is key for both club and country and just last year broke TWO records - and is now England's most capped player in history, as well as having scored more goals than any other England player. Indeed, Rooney will go down in history as one of England's best, probably even the best, and Beckham should be very happy that he still has the might that is Rooney in his current squad. 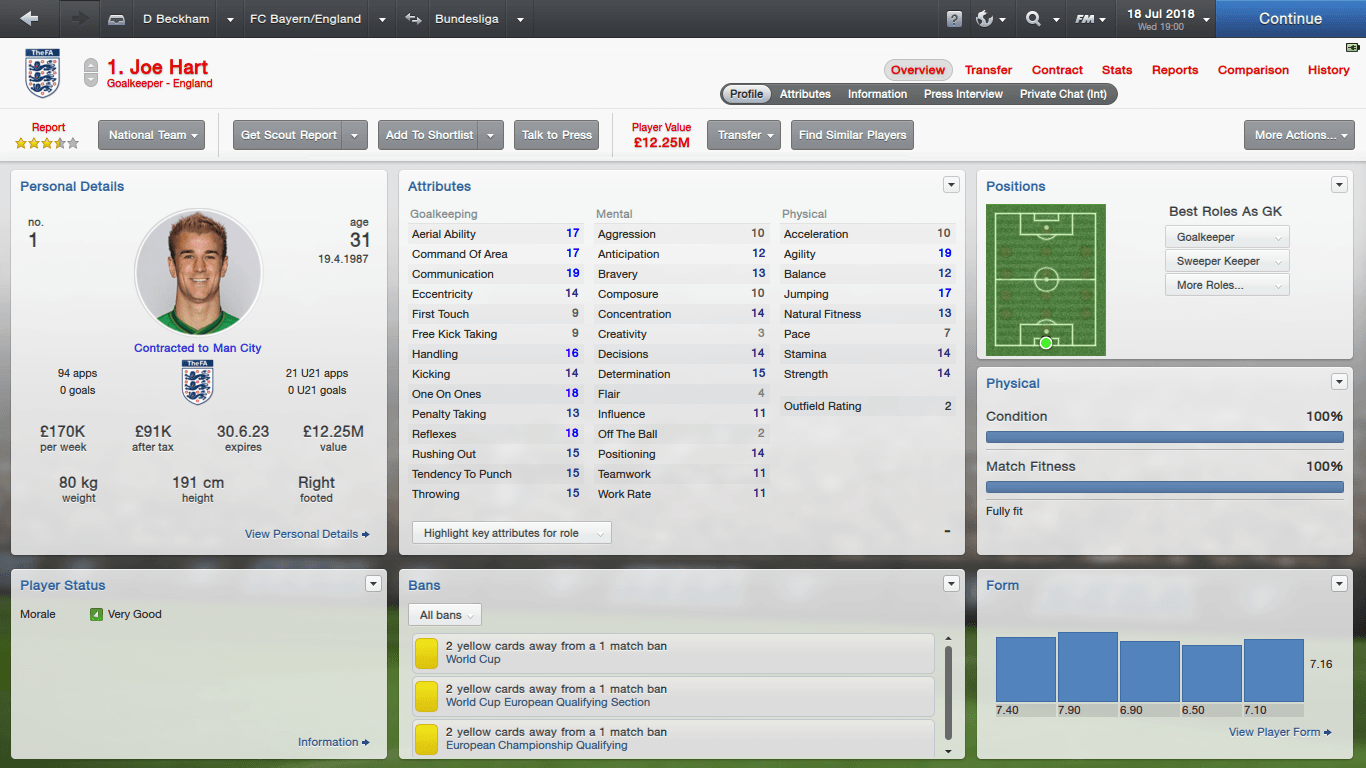 Another old guard like Rooney, Joe Hart has also, like Wazza, went down in history as one of England's best goalkeepers. Holding 94 international caps to his name and counting, Hart is still some way off of beating the record held by Peter Shilton of 125 caps, but if he continues his form for both Manchester City and England, Hart will have no problem getting there at all. Aged 31, he has hit his peak and for now, looks like he could carry on playing for both City and England until the age of 40. 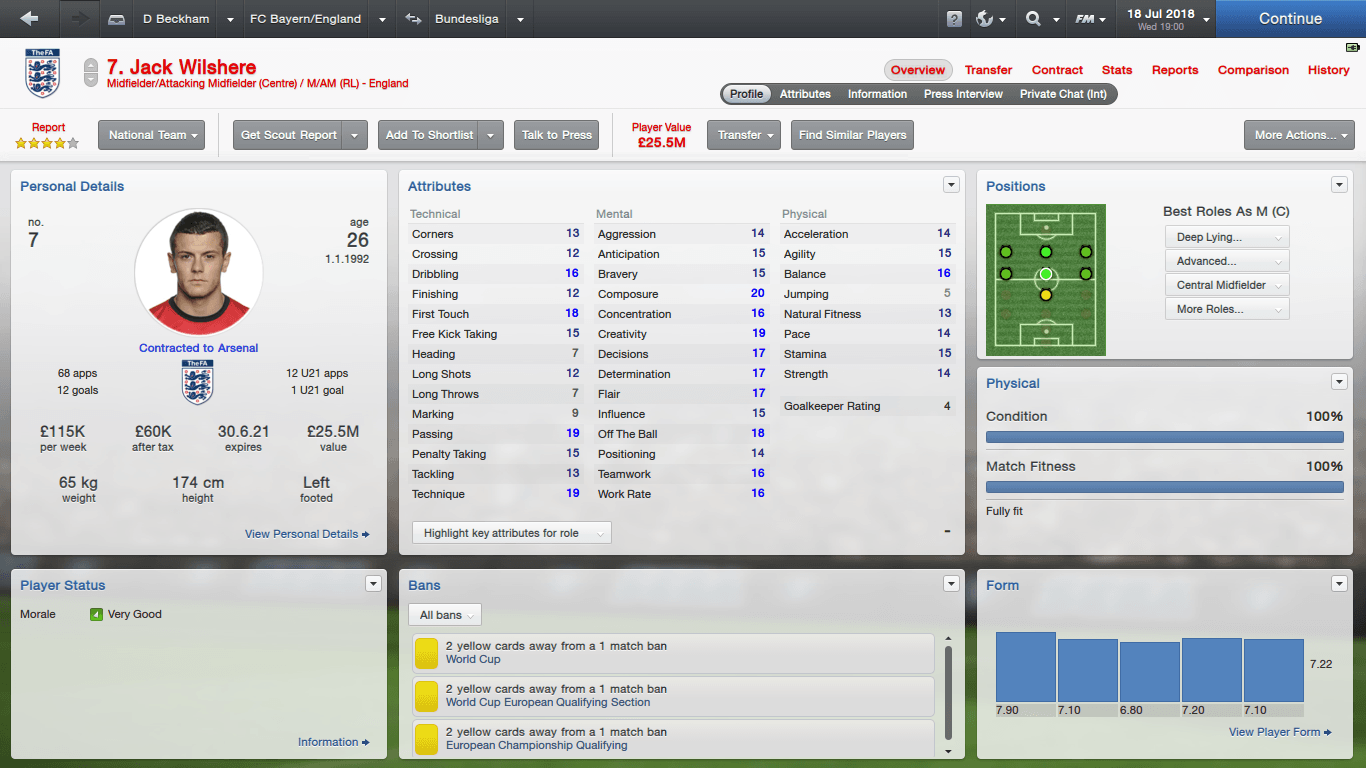 The Arsenal captain is still at his peak and has, like pundits described, turned into Frank Lampard and Steven Gerrard combined for England. Already having 68 caps to his name at the age of 26, 1 more to 69, which we can all have a laugh about, Wilshere will presumably be the main man in England's midfield throughout Beckham's time in charge. 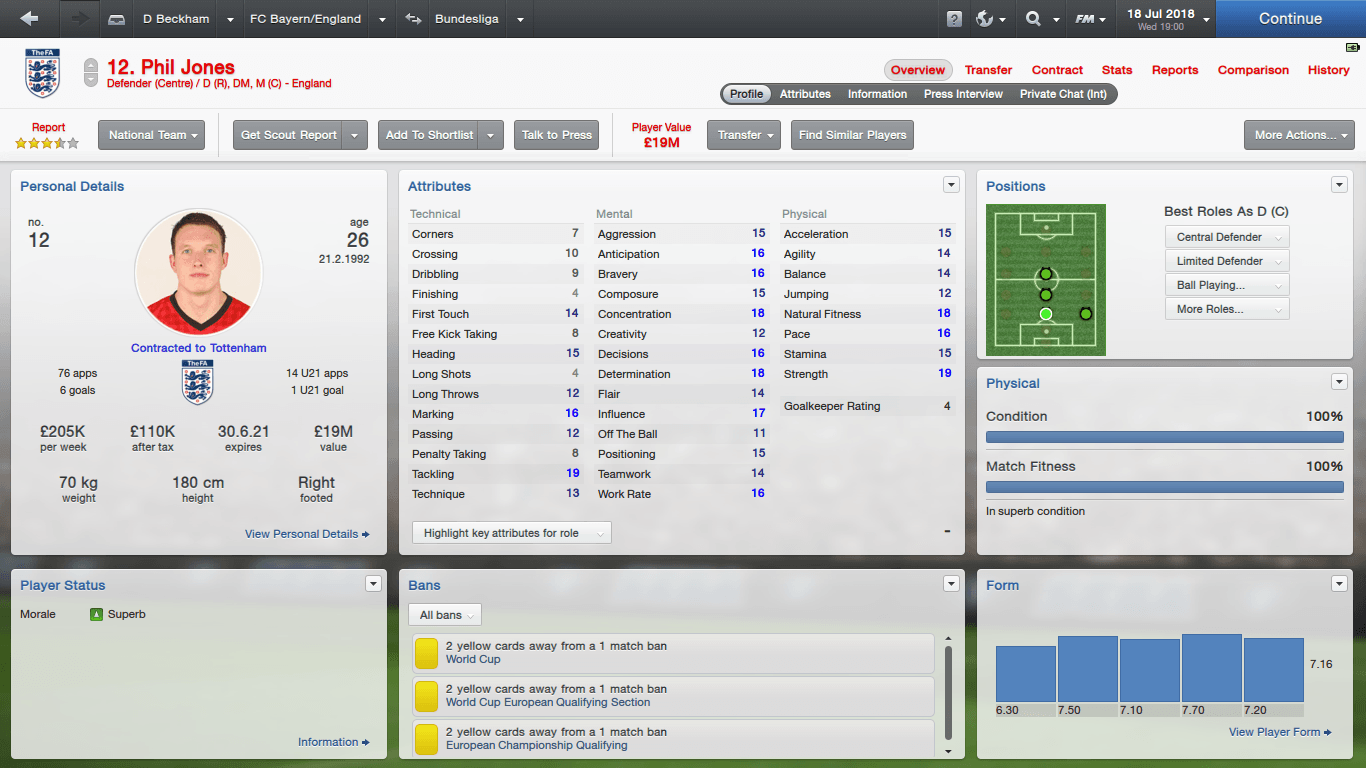 Arguably one of England's best ever defenders at the moment, Phil Jones is considered by many to be England's best player, although his form and quality has dropped a little after moving to Tottenham from Manchester United, after he grew unhappy with the management of Jose Mourinho in January 2018. Jonesy can play in both midfield and defense and already has 76 caps to his name at the age of 26, a rather remarkable number.

edu1878
8 years
A new era for England. Hopefully you can bring them the success you brought to villa and bayern.
1
Login to Quote

Glenn T
8 years
Louis & Edu: Thanks! I'll be hoping to add the World Cup and the Euros to my list of trophies soon

k1rups
8 years
Great update there of the England team mate will be interesting to see which other players get game time under your management ;p
1
Login to Quote

I'll be looking to give some game time to the players who don't often get them in friendlies, but when it comes to World Cups and all the serious shit I'll be calling up only my best players

England banner made by my banner man Louis O! Check out his story here - Chris Kamara - Saviour of the Saints

Thanks Louis!
Login to Quote 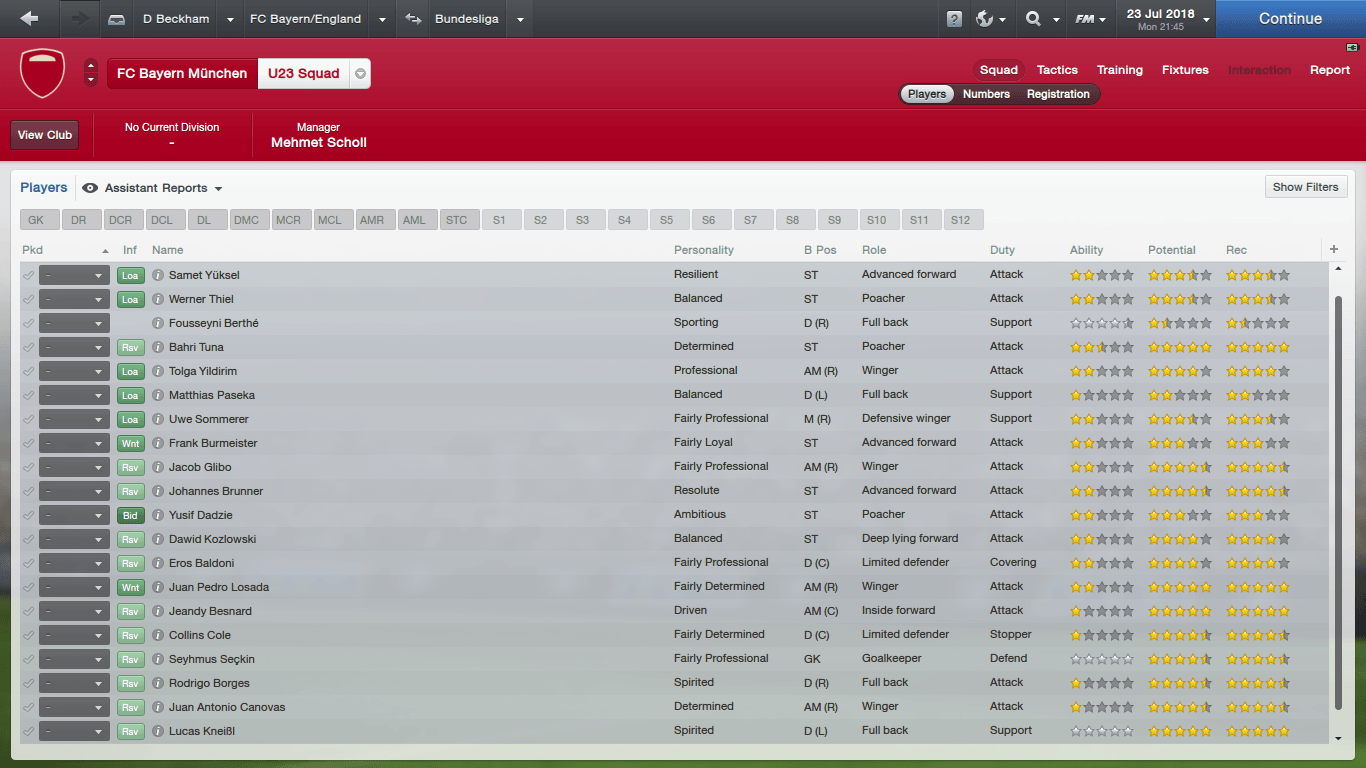 With most of pre-season gone, FC Bayern Munchen have published a report of their 14 of their most promising talent on their official website, all written by manager David Beckham and his team of coaches. 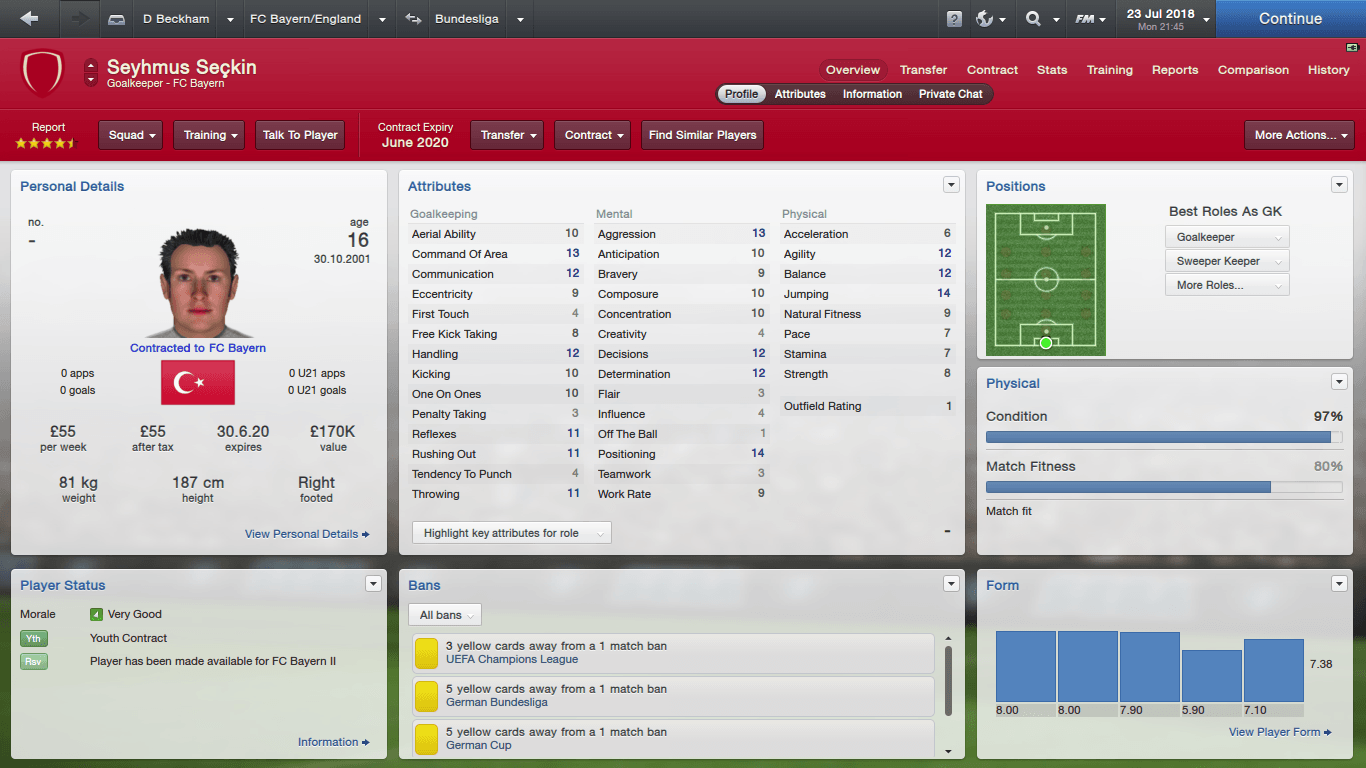 Young goalie Seyhmus Seckin is German and of Turkish descent - meaning he is eligible to play for both national teams. The 16-year-old graduated from Bayern's academy in 2017 and has been playing in the Under-19s since. He was first-choice goalkeeper for the reserves team, FC Bayern Munchen II last season and kept 8 clean sheets in 23 appearances. He indeed has a bright future if he can fulfill his potential. 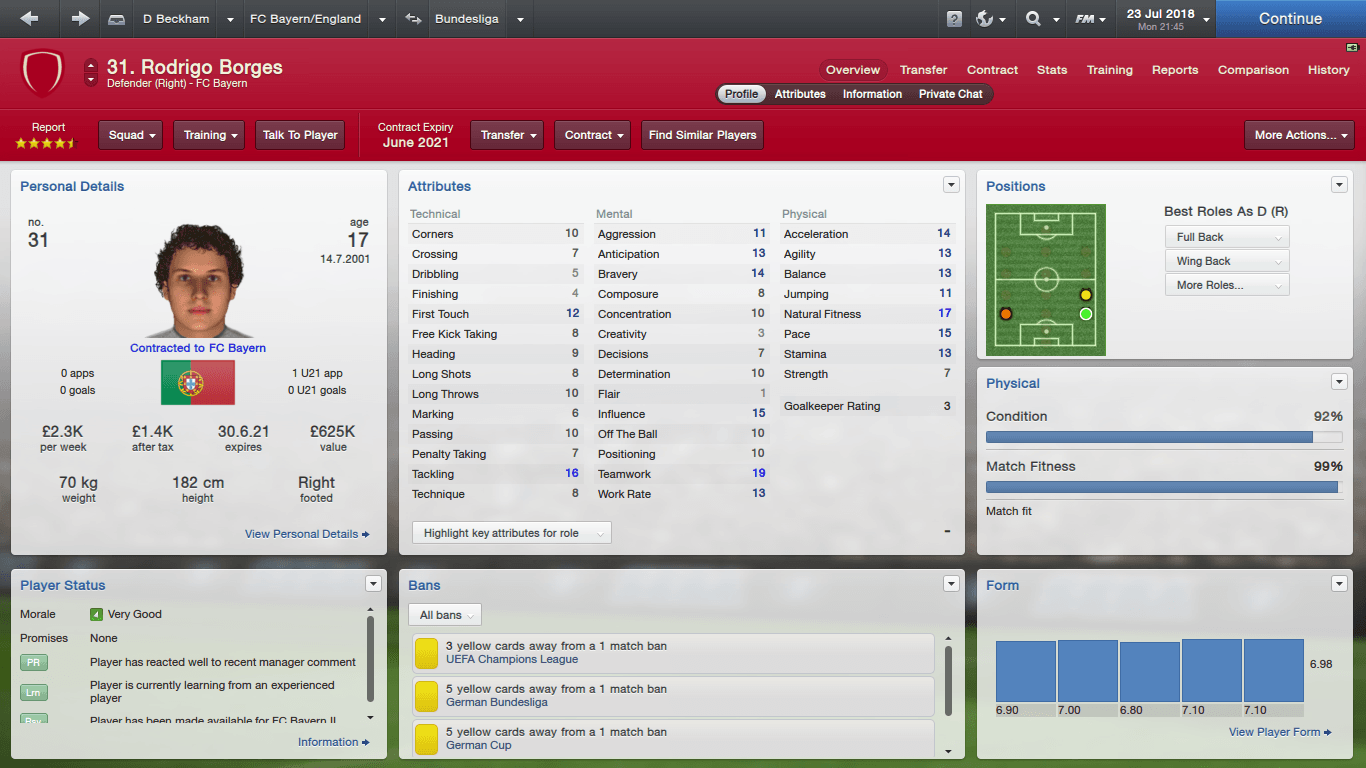 One of Beckham's first signings for Bayern Munich, Rodrigo Borges impressed playing for FC Bayern Munchen II the previous season after being signed in January, and is set to be called up to the first team this season. The Portuguese right-back has been handed the squad number 31, and is expected to play backup to Philipp Lahm. 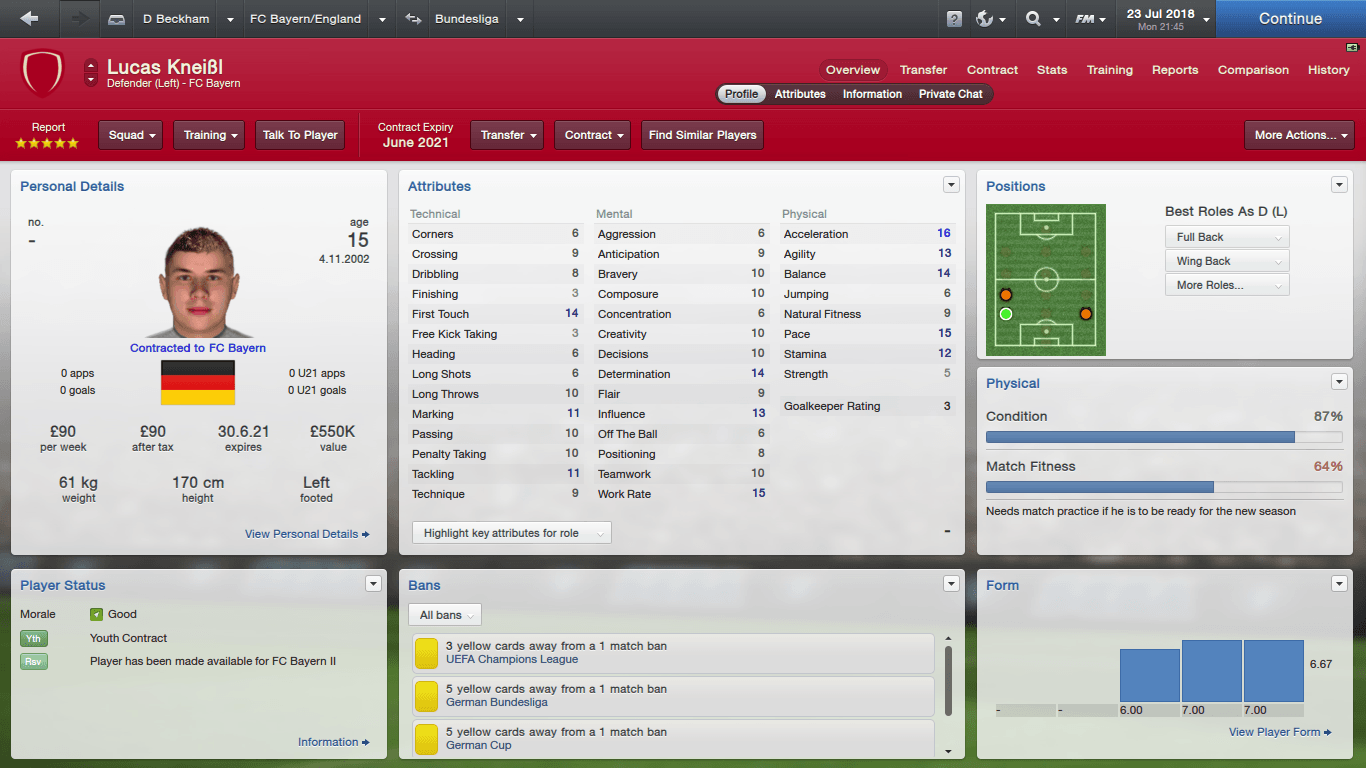 Fresh out of Bayern's academy, Kneissl joined the Under-19s team last season. Kneissl is a left-back and at the age of 15, still has a long career ahead of him. The coaches at Bayern are very pleased with him and if he keeps up what he's doing, by the peak of his career he will have become one of the best left-backs in the Bundesliga. 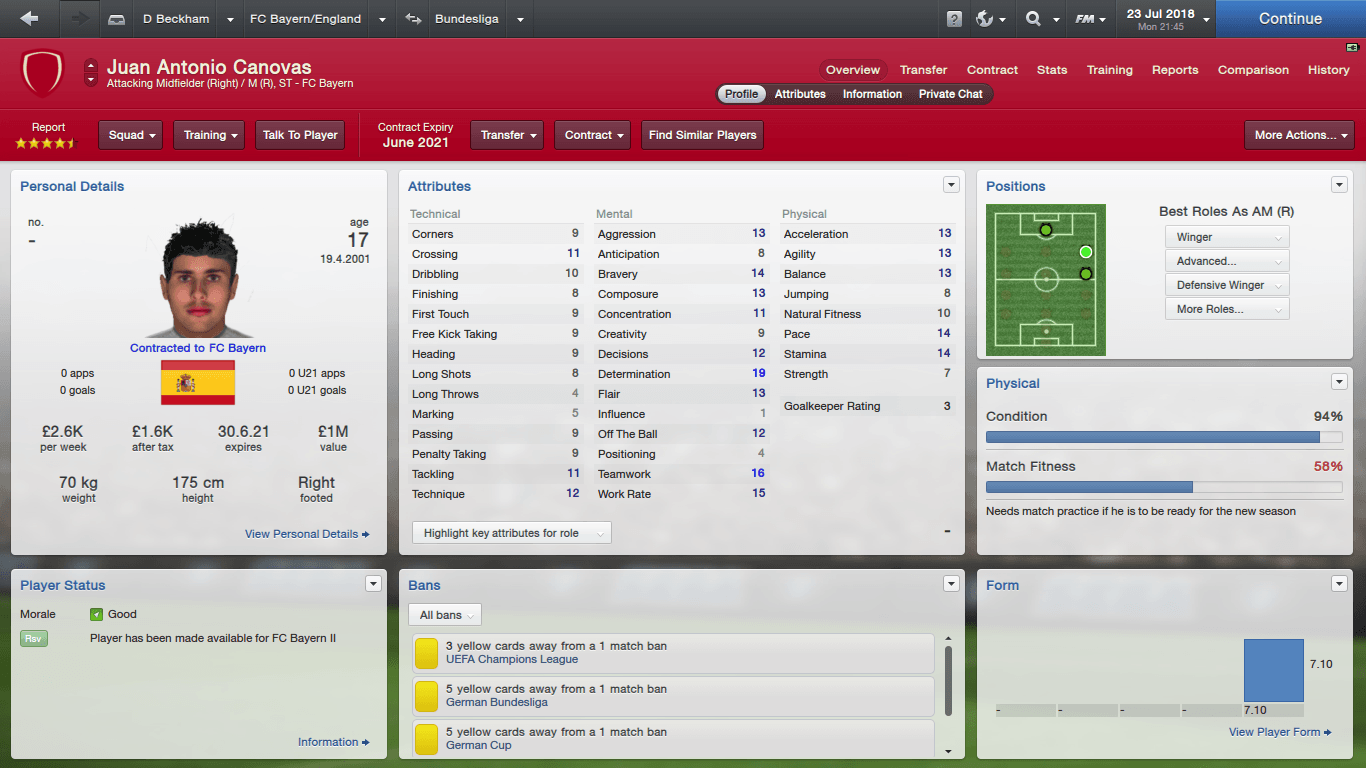 Signed from Liga Adelante side Murcia in 2017, Juan Antonio Canovas has been playing for the Under-19s team. The Spanish right winger is going from strength to strength and a call up to the Spain Under-19s is expected to be soon. 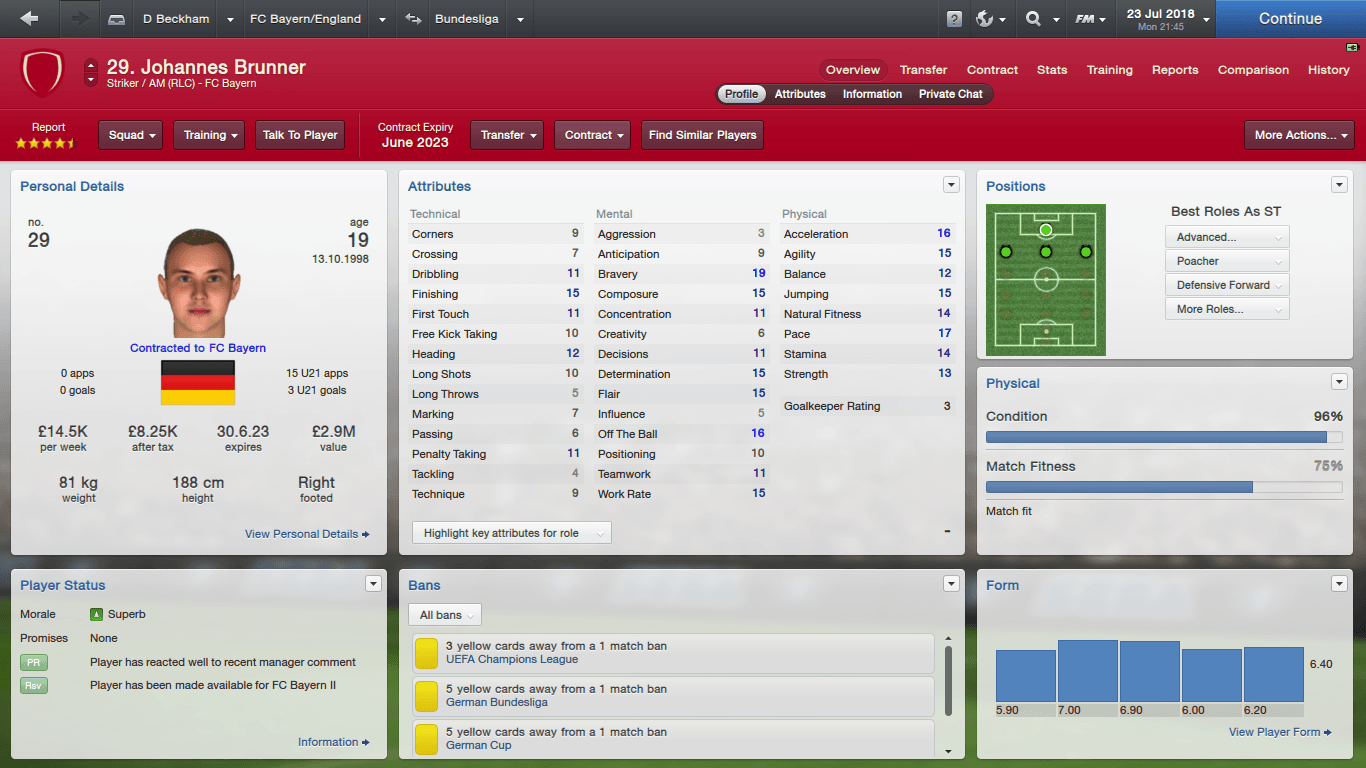 Another local talent, 19-year-old Johannes Brunner graduated from the Bayern academy in 2014 and immediately managed to win a place in Bayern Munich II. Although he failed to impress in his early years, Brunner scored 20 goals in 30 appearances for the Munchen reserves side. No doubt Beckham is very happy with his progress and although there are almost an unlimited amount of striking options at Bayern, there could still be a chance for Brunner to force his way into the first team this season. 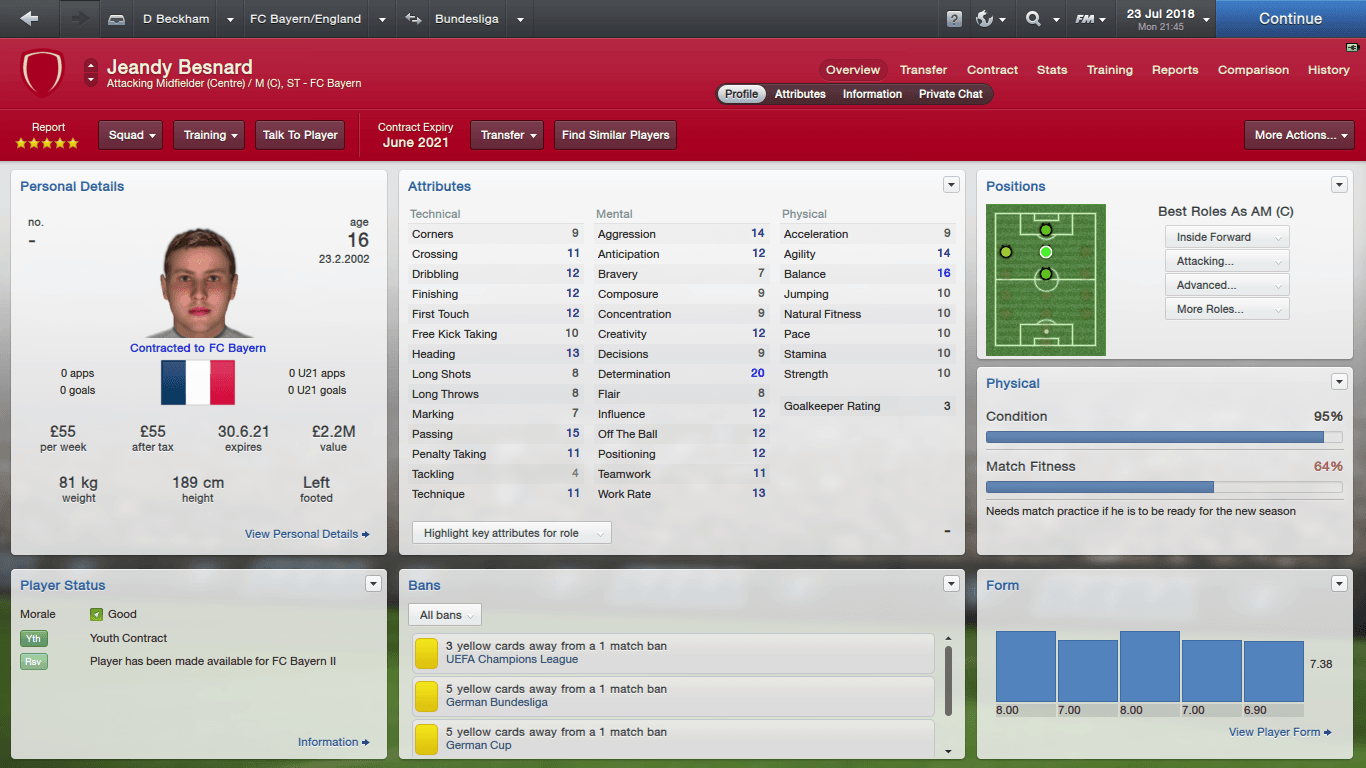 Signed from CS Sedan Ardennes last season in January, Jeandy Besnard was immediately tossed into Bayern Munich II and impressed, scoring 11 goals and notching 9 assists in 23 appearances. If all goes well, the Frenchman will be a very important player for both Bayern and France in the years to come. 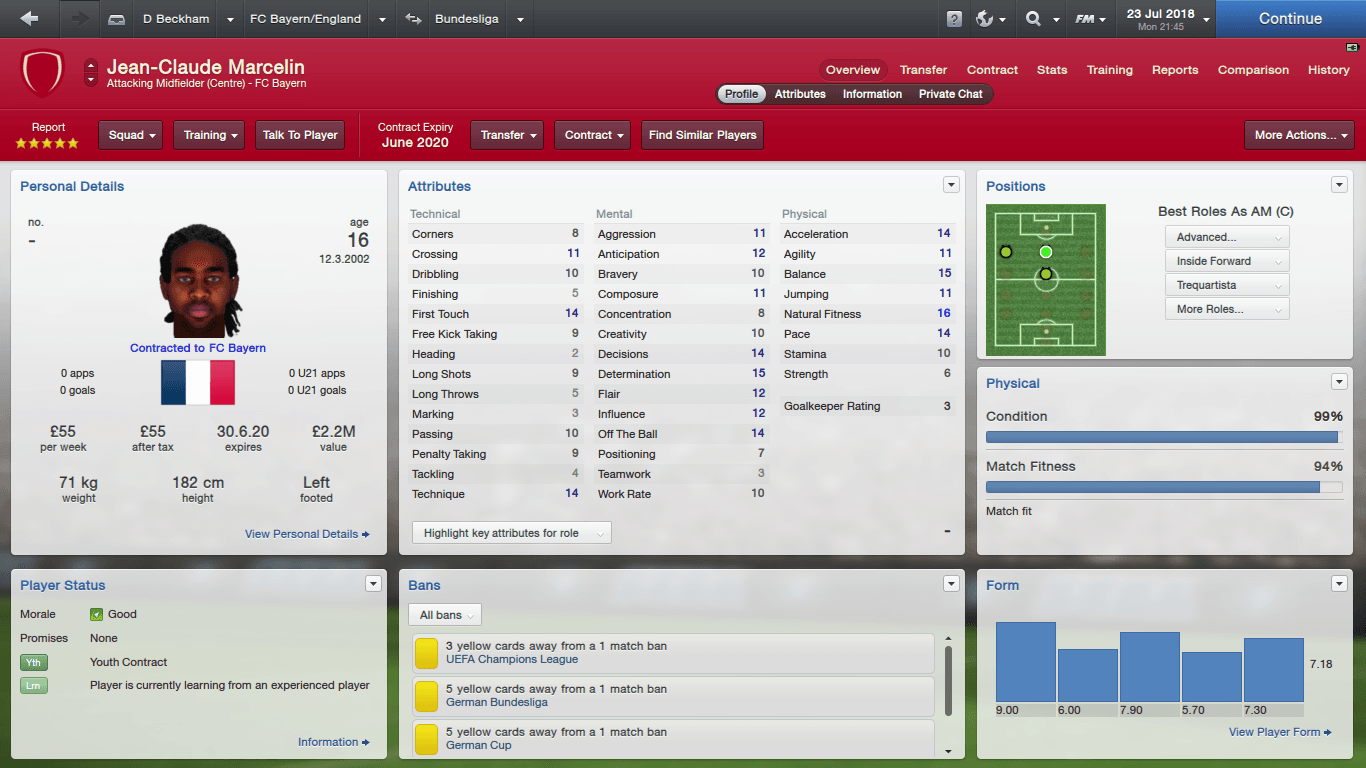 Jean-Claude Marcelin, a Frenchman like Jeandy Besnard, signed on from CS Louhanx-Cuiseaux last season as well, and although not impressing as much as Besnard, still managed to notch up 6 assists for the Bayern II team in 16 appearances. 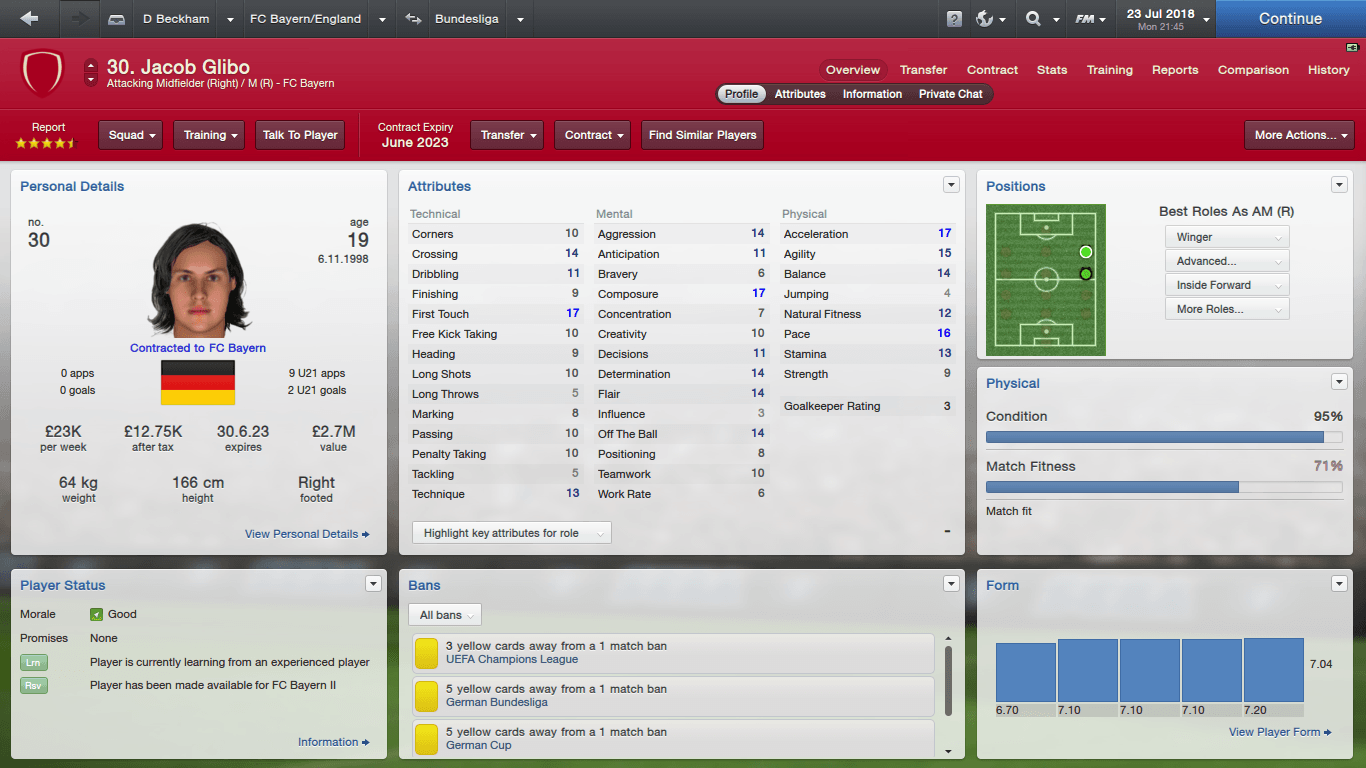 The 19-year-old German has already got his first taste of first team action last season. Jacob Glibo was brought in from fellow German side Stuttgart in 2014 and managed to score 8 goals in 35 appearances from Bayern II in his first season. The arrival of Beckham last November signaled a jump to the first team and Glibo eventually made his first 11 appearances for the Bayern first team, impressing in most of the matches. The rising star is expected to continue to play a small first team role this season again. 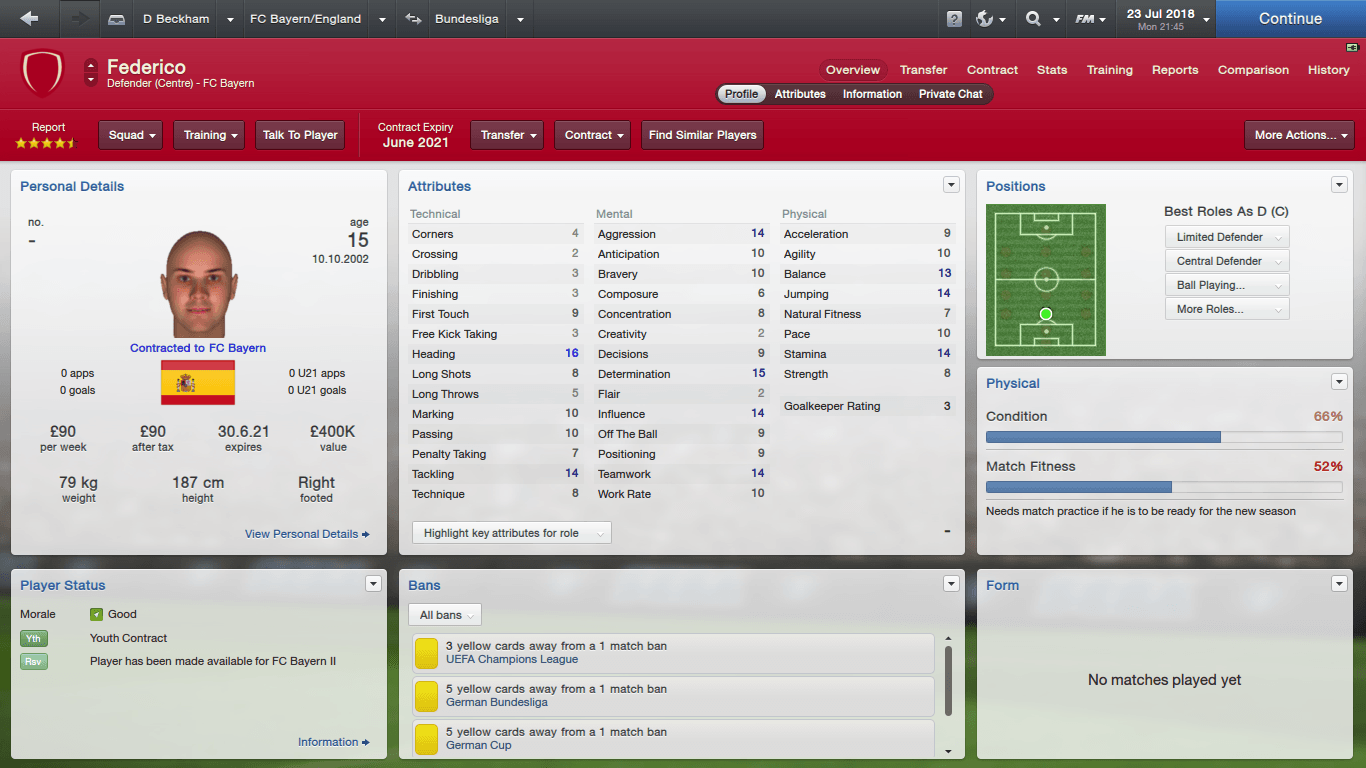 Migrating to Germany from Spain at an early age, Federico joined the Bayern academy and eventually graduated along with Lucas Kneissl in March. The 15-year-old Spaniard has been playing for the Under-19s team and has impressed in defense. A call up to the Bayern II squad beckons. 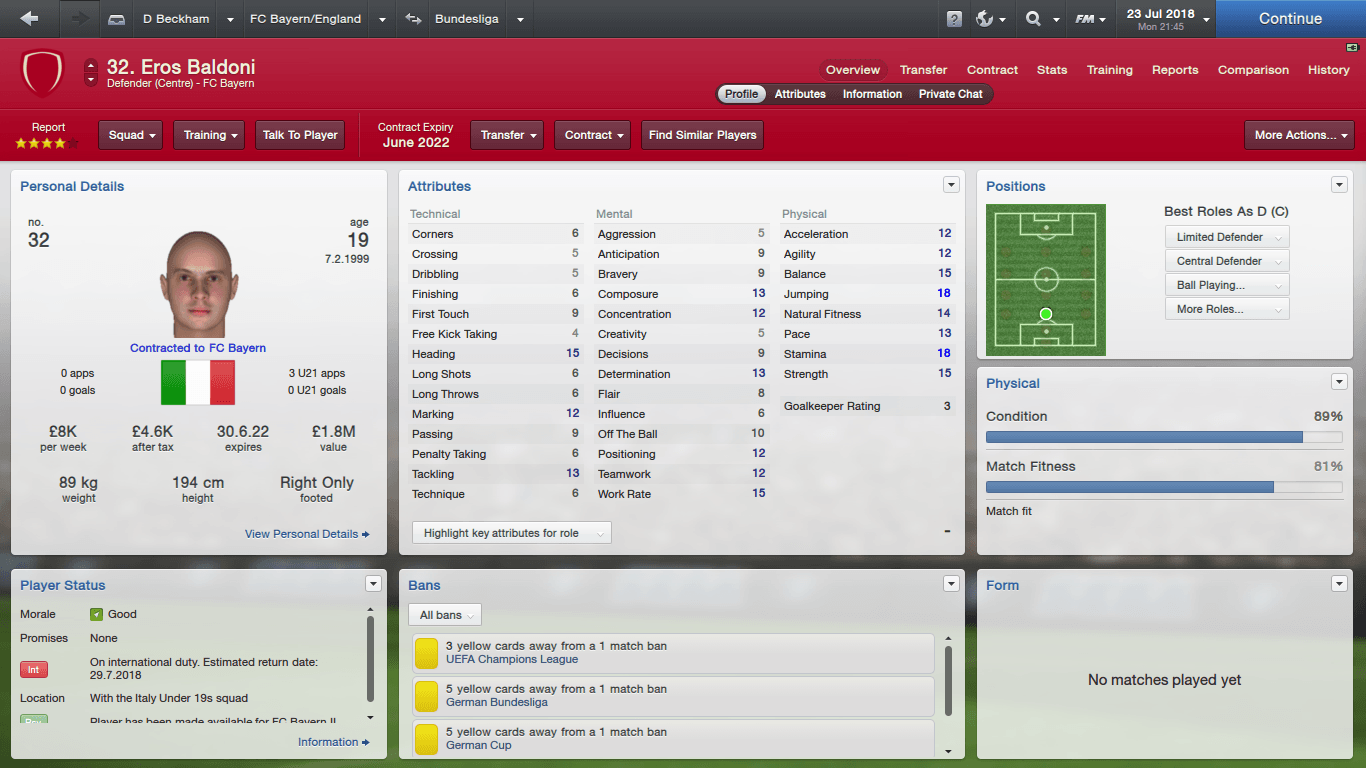 An Italian defender, Eros Baldini was signed from Atlanta last summer and is an established Italy Under-21 international. German pundits tipped the teenager to be in the first team very soon but as of now, Baldini has yet to make a full appearance. Still, he is held in high regard by Beckham and will play a role of some sort in the first team this season. 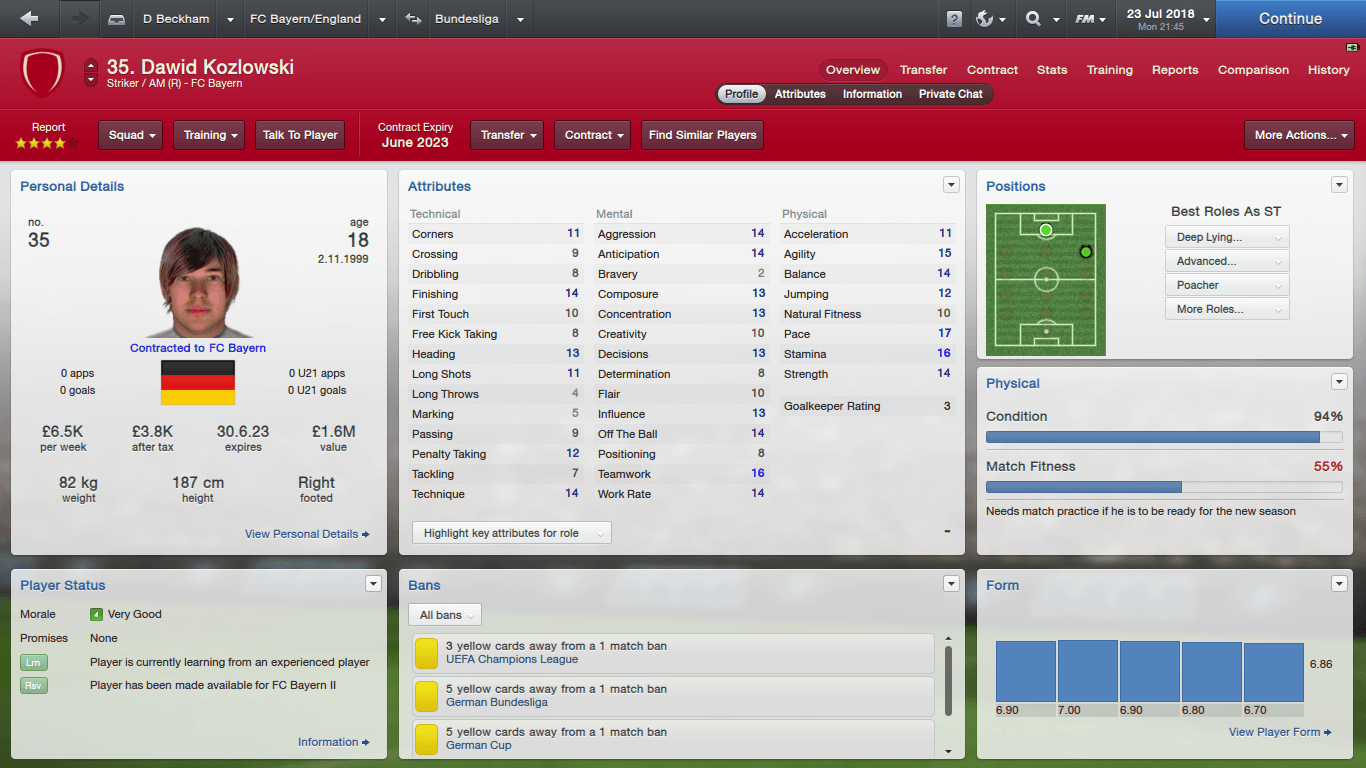 Although he managed to make 3 first-team appearances under David Beckham last season as well as scoring his first 2 goals for Bayern Munich against Burghausen in the DFB Pokal, Dawid Kozlowski is expected to be relegated back to Bayern Munich II this season, for whom he has made 17 appearances and scored 6 goals. 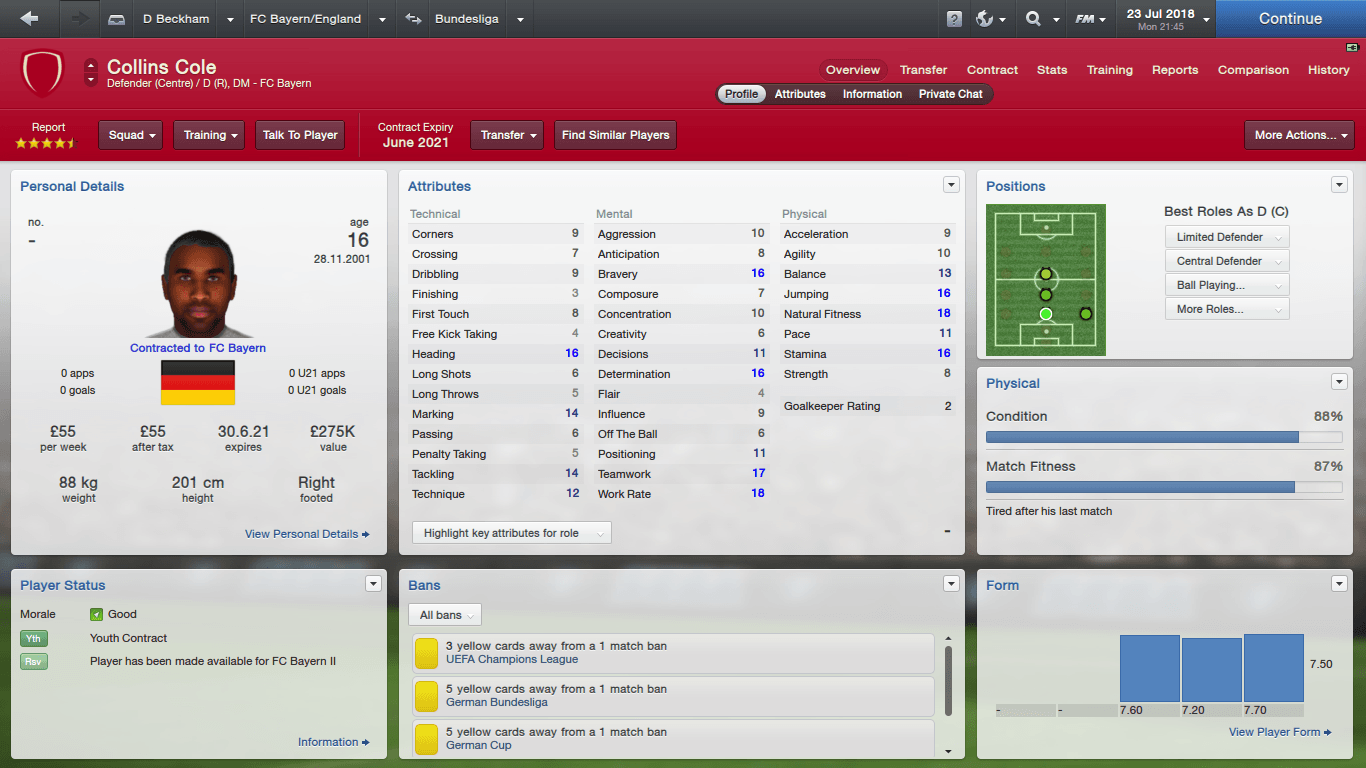 Of dual Nigerian and German descent, Collins Cole is a very promising central defender, having graduated from Bayern's academy two years ago. He was sent on loan to Sandhausen in the 3. Fußball-Liga and he impressed duly in his 36 appearances. Although still 16 and unable to make an appearance in the Bundesliga, Cole's debut is expected to come sometime soon. 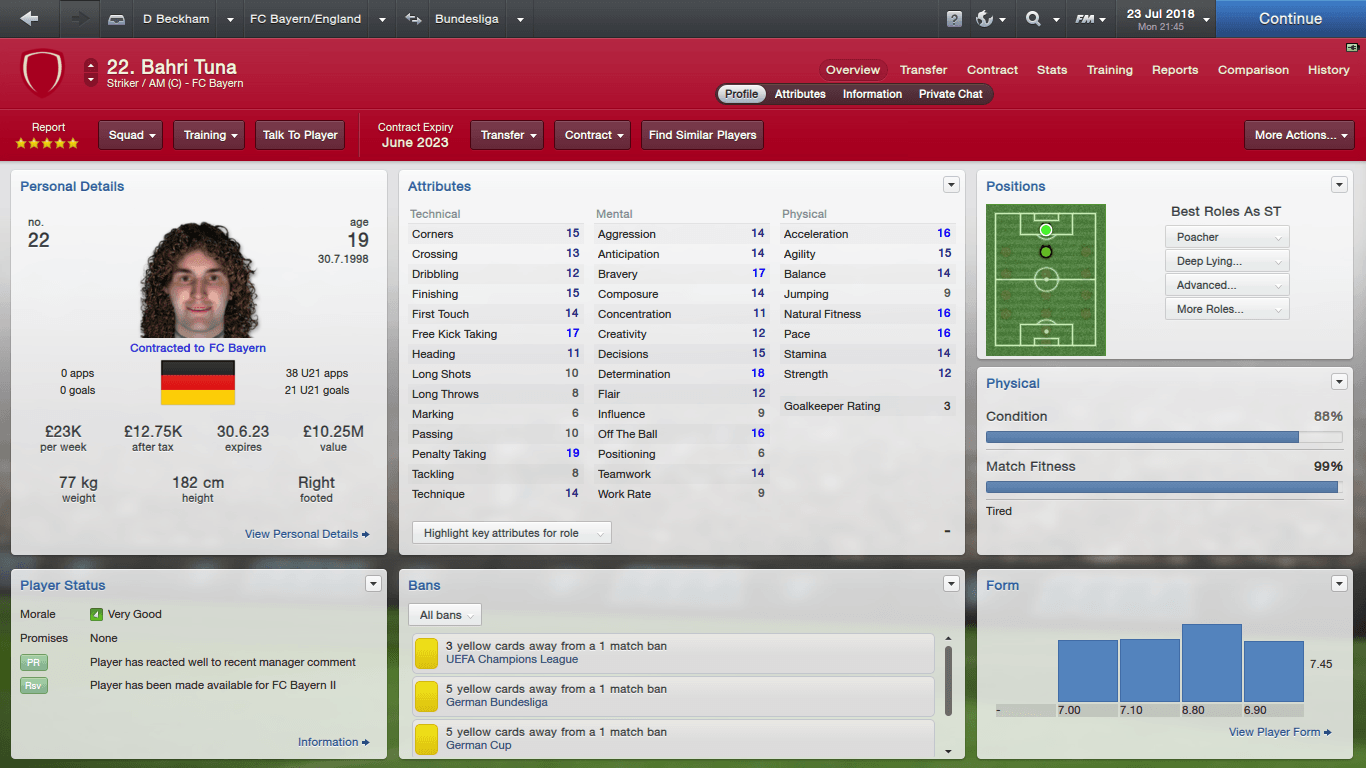 The most talented of them all, is 19-year-old striker Bahri Tuna. After being brought to Bayern Munich from 2.Bundesliga side Ingolstadt in 2013, Tuna immediately made an impact at Bayern II scoring 7 goals in 8 appearances. He was soon called up to the senior squad by Antonio Conte where he continued to deliver with 5 goals in 6 appearances - and Aston Villa, at the time managed by current Bayern boss Beckham, enquired about his services, although a move never materialized. Tuna was sent on loan to Milan last season, and made 19 appearances for the Italian giants in mainly an attacking midfield position. Fresh from his time in the Serie A, Tuna is ready to be back in the first team at Bayern and Beckham is also ready to give him that chance.
Login to Quote

k1rups
8 years
That is one pimped out youth academy :p haha loads and loads of quality there wow
1
Login to Quote