After our incredible change of fortunes last month, we were looking to go on a good run. A good run could turn our season on its head. Could we continue our pursuit to glory?

We did very well to win what we wanted to win but we were by far the second best team on the pitch against Lutton. I am happy with these results and delighted with the performances. Tom Rutter has been on form this month, scoring no less than three goals and claiming a number of assists. It is great to have more than one regular goalscorer and he has been key for us this season. 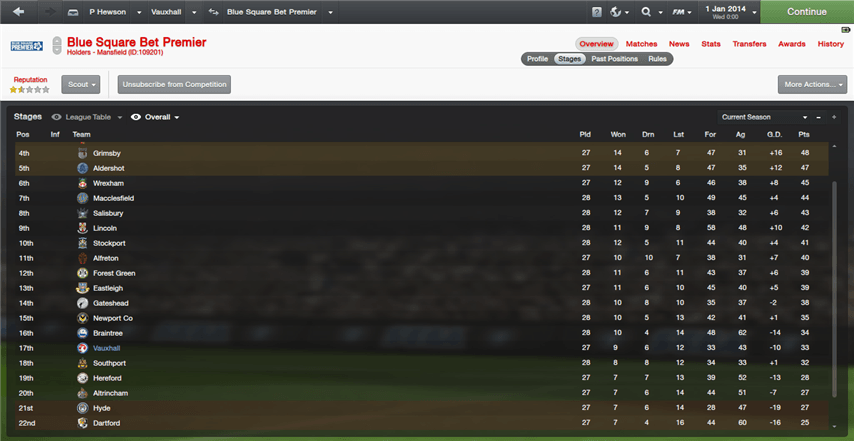 We are in a much better position now than we were two months ago. Hopefully we can keep on climbing up the table and maybe sneak promotion, somehow. That would make this the ultimate season for me.

Plymouth, Stockport and Kidderminster will be our toughest opponents next month but we will be looking to battle for the win in the other fixtures. This would put us on the path to glory.
Login to Quote

Jer
9 years
Very good month imo. The opponents were hard and I think that you can finish in the play-off places at the end of the season if you continue your form. Can you pull off a Milan one? Anyways, keep the updates coming as I am enjoying this story to the top. And.. I bet by tomorrow you would've reached 2k views.
Login to Quote

keep it up.
Login to Quote

Jer
9 years
Refreshed various times and got you this buddy. Congratulations. You deserve it.

It would be a crime if you didn't

I am delighted to have great readers like you


With December being a very successful month for us in the league, we were looking to further climb up the table and maybe just get in to touching distance of the play-off spots. We had a tough schedule for January but with how we have been playing, nobody scared us.

We were unbeaten in the league, which I am very proud of. Unfortunately, we crashed out of the FA Trophy after a very disappointing defeat at the hands of Stockport. Our players are looking very motivated each game and we look more and more like league champions than league strugglers. 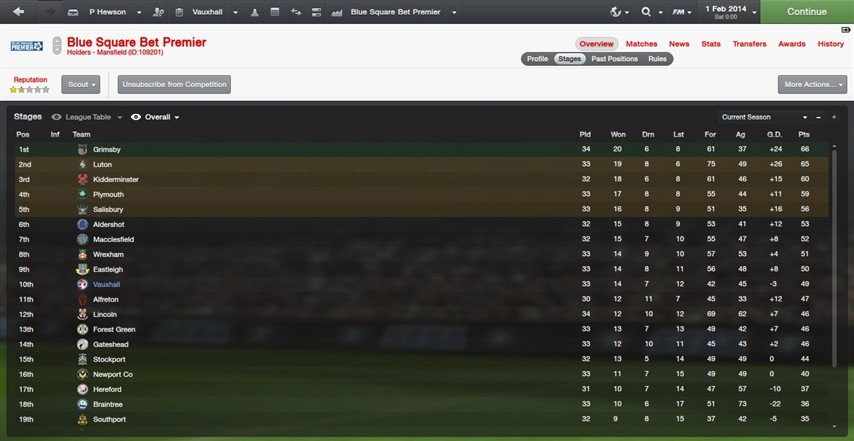 We have climbed up, quite astonishingly, to tenth place. We are now just seven points away from the last play-off place. We have played wonderful football and the teams around us are slipping up and dropping points. We are in reach of a play-off spot and we will be fighting for it.

We have only three games in February. This will help the squad to heal up any injuries before jumping in to the lions' den. We will be hoping to further climb the table and to scare the top six/seven teams.

Thank you to all those who have been following my adventure. I am so proud to have over two thousand views and it inspires me to keep going. I would also like to thank my friend and moderator, Blue, for giving me the opportunity to be a judge on the Story of the Month panel. But this could not have happened if it wasn't for you guys who have welcomed me so warmly in to the community. This story is for you!

Blue
9 years
Good to see you pushing up the table

Also, you deserve that judging spot

Kane
9 years
Congratulations of the 2000 views. Great to see the team and results improving. December was great, well done. Can't wait to see the next Messi arrive from the team.

Neal
9 years
Talk about a wonderful late run! Playoffs aren't that far away, you can make it

AlexSonwild
9 years
You can make it to Playoffs m8. Good Luck

Also, you deserve that judging spot

Can it be done? We will find out soon

Hopefully we can get some good players

Maybe we can do a "Man City"

Jer
9 years
You can make it mate! You deserve to be in the panel and in the judge panel.
Login to Quote