Jozef
9 years
damn, what a result against Man City. Last time I read you were rock bottom, great work mate.
Login to Quote 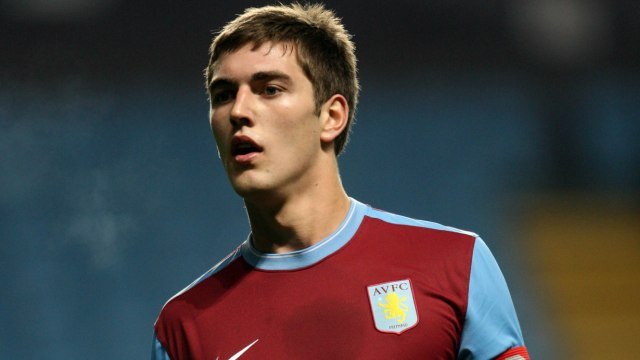 Sky Sports Reporter: "Middlesbrough midfielder Gary Gardner has had his transfer request accepted by the Middlesbrough board earlier today. The experienced Englishman signed for the club in 2016, but he is understood to be disappointed with the progress made by the club and that he wants to play Premier League football.

There have been several clubs linked to the midfielder, with one club in particular being Vauxhall Motors. Paul Hewson is looking for a replacement for the ageing Isaiah Osbourne, who is now 33 years old, and he feels Gary Gardner would be the perfect replacement. The Englishman would fit in to a midfield with the likes of Tony Garbutt and Sander Kaljuste, one which would certainly be a good midfield for any Premier League club.

One club looking to challenge Vauxhall in a bidding war for Gary Gardner is Southampton, a club which is lacking midfielders. Both clubs are expected to participate in a bidding war for the midfielder, with Middlesbrough having put a £4,300,000 price tag on the player. Who will Gardner sign for? We will have to wait for that question to be answered. 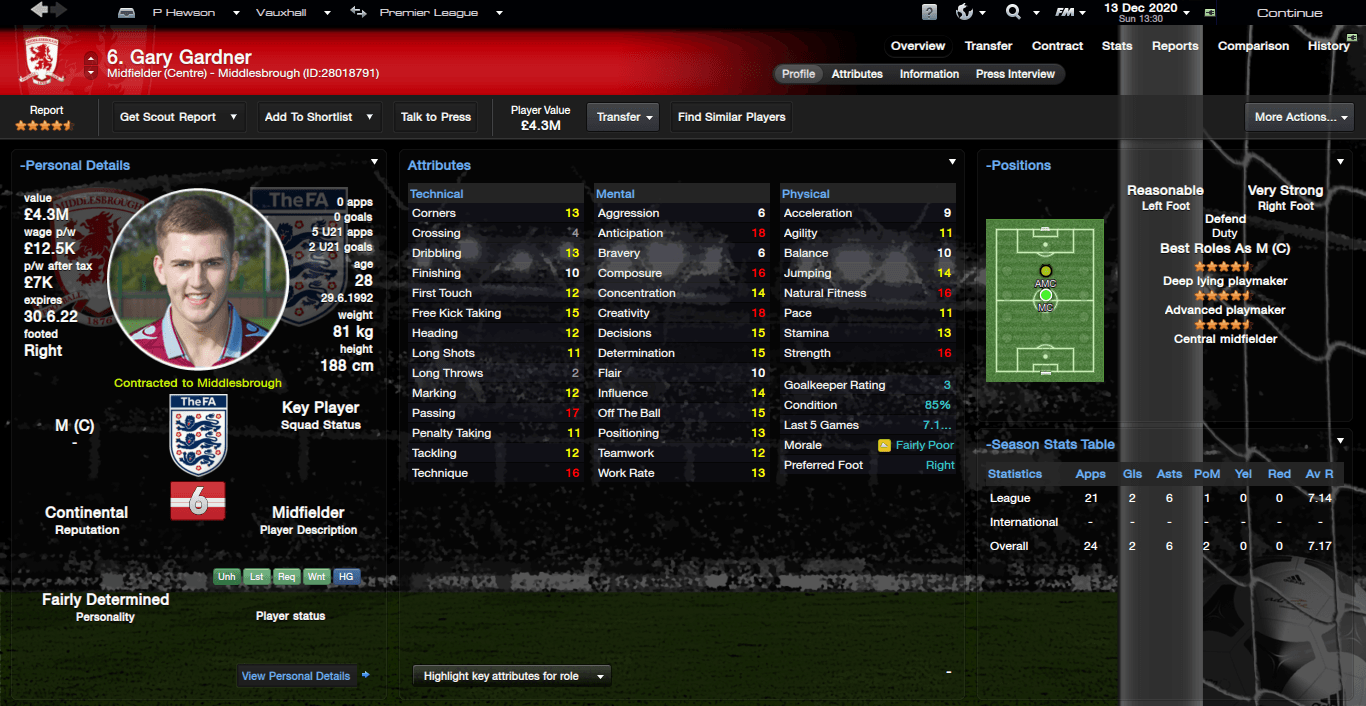 Make sure to stay with us after the break as we will have interviews with Roy Keane over the Euan Smith selection dilemma that he faces, aswell as an interview with Vauxhall Motor's veteran goalkeeper, Mark Bunn."
Login to Quote 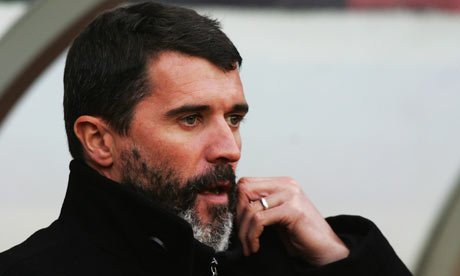 Roy Keane: "We've (Scottish national team) played well so far in this qualifying campaign. Any worries that we would be complacent after reaching the semi finals of the European Championships in the summer are all gone. We are top of our group and I believe we can qualify top of our group for the World Cup.

I have had some people criticise my team selection, such as why I continue to play Steven Fletcher over Euan Smith, but I don't care about those critics. Kenny Dalglish is in over his head if he thinks he can pick the squad better than myself. We're talking about a guy who spent £35M on Andy Carroll, and £50M on Downing, Henderson and Adam. This is a guy who believed that Jay Spearing was a top Premier League midfielder, who does he think he is? He's just making a show of himself anyway, the clown.

There is a reason why I pick Steven Fletcher over Euan Smith. Steven Fletcher's goalscoring record this season has shown that he is a much more proven goalscorer at a top level than Euan Smith is. I don't really care if Euan Smith made it from the NPower League Two to the Barclays Premier League, because that was all the doing of his poncy manager who still thinks every day is a 'beautiful day', what a twat. Steven Fletcher is the best choice, end of."

Neal
9 years
Stats speak for themselves, #EuanSmithforScotland
Login to Quote

HamoudiLFC
9 years
Wow! Must I say I am impressed! The layout, the writing, the fiction, the results... Justice you are amazing! You just gained another follower!

I read all 51 pages in the last 4 hours and I loved it! Continue and Good Luck on getting Vauxhall to the top mate! Judging from your profile pic it seems like you're a Liverpool fan so, Youll Never Walk Alone mate, all of us are here supporting you to reach that goal! Good luck!

Justice
9 years
@neal09, sometimes I think Roy Keane just does it to troll.

@HamoudiLFC, you flatter me too much!

Thanks for reading and I'm glad you're enjoying it

Thanks mate, Keane's a fool


We had finally gotten used to Premier League life and were looking to claim enough points to help us evade relegation. We went in to the final month of the year with rumours flying around the place about our future, possible transfers, etc. However, we had to set our focus on our next set of games and doing the best we can.

We started the month off with a comfortable win over Burnley to put us through to the semi finals of the Capital One Cup. We then got back-to-back draws against Newcastle and Reading, before narrowly losing out to Stoke away from home. We then bounced back with a 2-0 win away to Southampton, before title chasers Chelsea and reigning champions Manchester United both claimed 3 points against us to finish off our calender year on a low. I suppose I have to be content with our results, as for a just-promoted team, any point is a point well earned. At the end of the day, I'm delighted we are in the semi finals of the Capital One Cup, a competition which does hand out a European place. 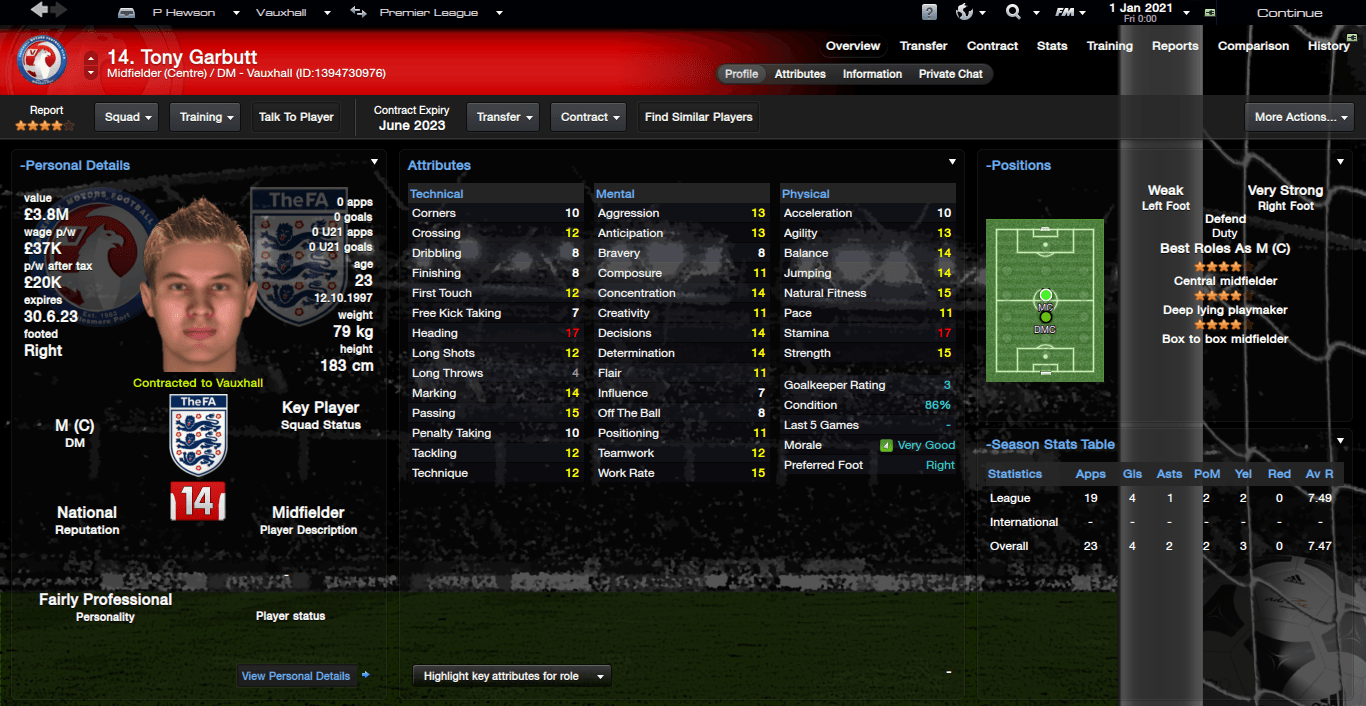 Tony Garbutt is my player of the month for December. The midfielder was in incredible form to help us claim five league points and passage to the COC semi finals. He scored four goals during the month, which is fantastic for a midfield player. Ever since signing from Manchester United for £200k last season, he has been a fantastic player for us and his transfer fee was a bargain for a player of his quality and his current value. 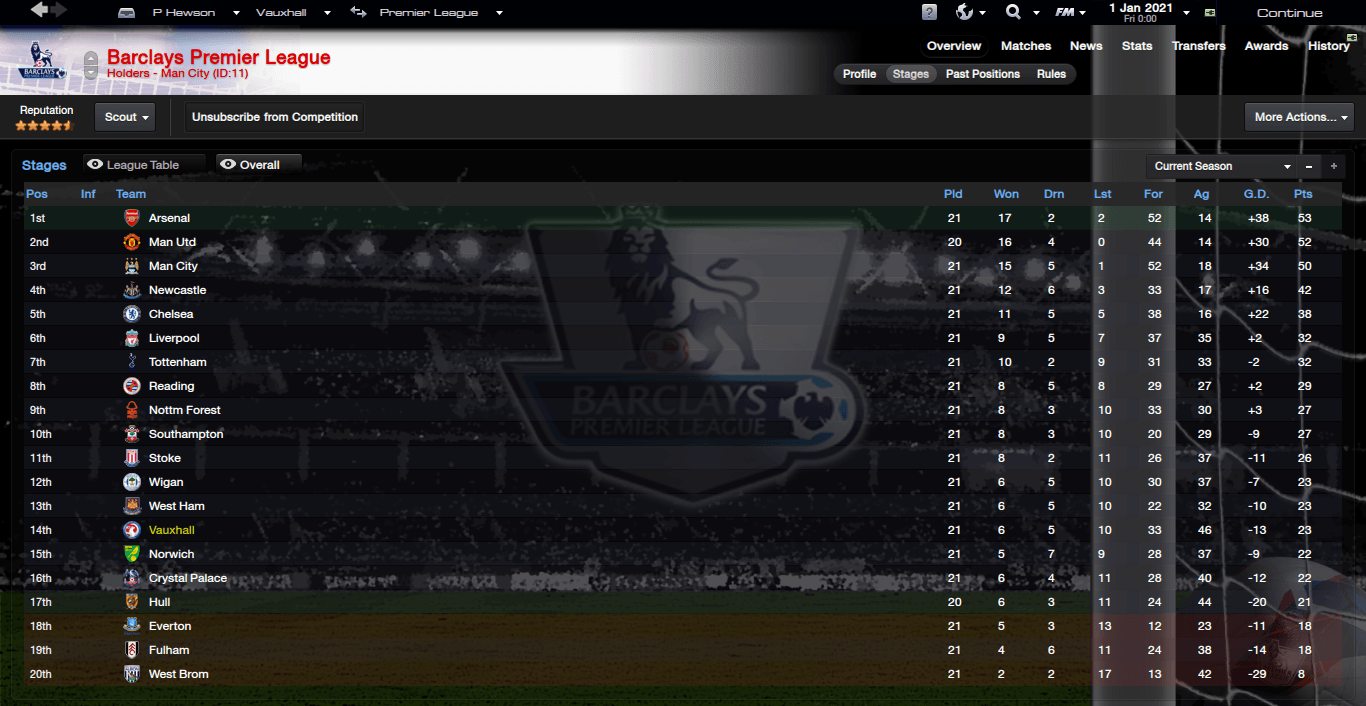 We have slipped down to 14th and are just five points away from the relegation zone now. I still think we are doing a tremendous job so far, as we are a lot higher than expected. If we can stay in this position for the rest of the season, I can see us pushing even further next season.

We have another busy month coming up, with no less than eight fixtures to be played, including League Cup semi finals against Newcastle and an FA Cup tie against Accrington. We also face Tottenham and Liverpool in the league, whom we drew with in previous league encounters. Hopefully we can do well in the league this month, and my focus will be on the cup competitions, as that is where I want to do well in this season.
Login to Quote

If we could do that, it would be incredible