Hopefully he can! Thanks pal

Hewson: This is our time 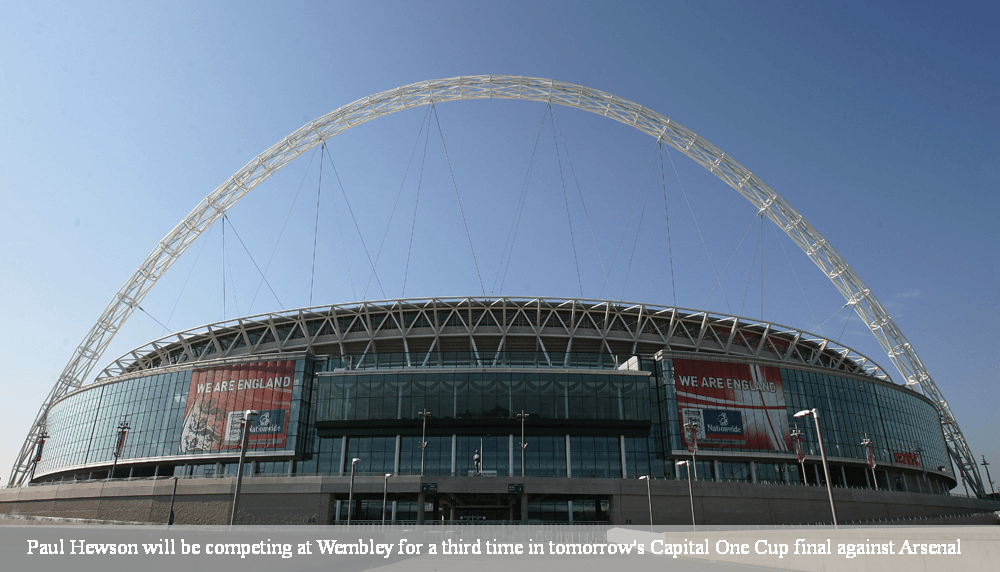 Paul Hewson: "Tomorrow is a big day for Vauxhall Motors. This is the club's first ever major cup final, and what a final this could turn out to be! The last time we were at Wembley was last season in the FA Cup semi finals, where Arsenal slaughtered us. We were so unlucky then, but this is our chance to beat them at Wembley!

We won't be going out there looking for revenge, however. We will be competing for the trophy, and nothing more. Yes, there will be a lot of nervous people tomorrow, but we will try our best to focus only on the game and winning the cup. The League Cup, or Capital One Cup as it is called now, isn't seen as important as the FA Cup is now. I can tell you, however, that the League Cup was the biggest cup competition in England when I was a little kid.

The Capital One Cup is a major cup competition, and one that brings many wonderful memories. It is silverware, and one that we want to win. We will go out there tomorrow with passion, with pride, with hope, and with Vauxhall in our hearts. We will fight for the club to win this game, even if it all looks lost to us. Arsenal may be the bigger club, but we won't be the club to give up!"

Glenn T
9 years
A great couple of updates, and it's unfortunate that Mark Bunn is retiring. Good luck on selecting a new goalie. Fantastic song at the end. MT "The stories of cup finals at Wembley are written in the pitch of the stadium, where some of the greatest matches of all time have been contested. Today's game is the Capital One Cup final, and there is no better feeling than warming up to watch this match, unless you are playing in it of course. Current Capital One Cup champions Arsenal will be playing a team which has never reached a final in any major cup competition, Vauxhall Motors. My name is Martin Tyler and Gary Neville will be alongside me today as we witness what will hopefully be a great final."

GN "Thank you Martin and hopefully we do have a fantastic game on our hands! Arsenal are currently challenging for the Premier League title and are beating Real Madrid after a win over them in the first leg of the Champions League first knockout round. They were, however, beaten by Newcastle in the FA Cup. On the other hand, a resurgent Vauxhall side are currently battling for a top half finish in the Premier League, and are also in the quarter finals of the FA Cup! So both teams will be challenging for other pieces of silverware this season, but this will be their first chance to get some today."

MT "Both managers will be looking for a silverware to make a statement to the world of football. Let's have a look at the teamsheets for today." 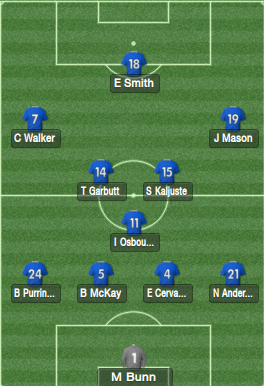 
MT "The players are ready to start the game now. Arsenal will be playing in their traditional red and white, Vauxhall in blue. The fans are in full voice today, almost forty-thousand from each club have traveled to Wembley to witness this game! The two captains, Hughes and Smith, have shook hands and decided the coin toss and the game is about to get underway!"

Kick-off: MT "Arsenal start the final to the roar of the Gunner faithfuls!"

7' Shot - wide: MT "Arsenal are looking a little nervous on the ball so far. Its with Poli now in midfield, out right to Kouakou. Aguila takes the ball on the overlap, and skips past the challenge of Purrington. His cross is blocked by McKay and the ball falls to HUGHES!! Ohh, just wide by the skipper!" ||| ||| ||| GN "Arsenal's first real attacking move of the game and they almost score from it. Aguila did well to get around Purrington but his cross was to easy for McKay, but his poor clearance put the ball out 25 yards away from goal, where Hughes was always going to attempt to volley the ball home. Unlucky for the Arsenal captain."

26' Shot - wide: MT "Mason has gotten himself trapped in the corner by Bromley and Sterling. Oh, he shifts the ball well and picks out Kaljuste on the edge of the box. He turns, back for OSBOURNE!! Ohh, that was dipping at the last minute, you know! Only grazed the top of the bar."

Smith - goal: MT "Bunn takes the goal kick short to Cervantes.... Some very neat passing by Vauxhall, keeping the ball away from the Arsenal players. Mason hits a pass forward for Smith, and he has the beating of Vertonghen here! Can he finish it?... HE CAN! ON THIS DAY OF ALL DAYS!!! Look how much it means to him! The Vauxhall captain had only dreamed of this before, now his dreams have become reality!" ||| ||| ||| GN "Never, ever, put Vauxhall Motors down, because they will do that to you! What a move, what a goal, what a moment for Hewson's men!"

43' Shot - missed: MT "Hughes beats Osbourne to the ball, he picks out Sterling on the left. Sterling cuts in, ohh dummies beautifully and shoots!... That shot really does sum up Arsenal's half; Sterling got in to a great position, but his execution was shocking."

45+3' Half-Time: MT "Howard Webb calls time on a very nervy first half here at Wembley, with Vauxhall going in to the break in front."

Kick-off: MT "Vauxhall start the second half a goal up over Arsenal. Can they hold on to record an historic cup victory?"

66' Shot - woodwork: MT "Kaljuste lines up this free kick and he is just within shooting range on the right hand side. He is known for his free-kicks, but can he test Clifford in the Arsenal goal today?... OFF THE POST!!! So unlucky for Kaljuste as he bends the free-kick around the wall and it hits the outside of the post, so close!"

Smith - goal: MT "Cervantes exchanges passes with McKay... he hits a very optimistic pass forwards for Smith and Clifford has come out of his goal for it.. Pichugin gets his head to it BUT STRAIGHT TO SMITH FOR HIS SECOND OF THE GAME! He has just won the cup for Vauxhall, at the expense of Arsenal's defensive blunder! Wembley is where heroes are made, and Euan Smith, you are now a hero!" ||| ||| ||| GN "Well it looked like nothing would come out of Cervantes' long ball but what was Pichugin doing? His 'keeper, Clifford, was there to claim the ball but Pichugin goes and gets his head on it, and leaves Euan Smith with the ball and an empty net to tap home. Well deserved for Vauxhall, and Appleton will be scratching his head for years to come as to why his defender decided to head that ball!"

90+1' Full-time: MT "Howard Webb calls time on the second half and Vauxhall Motors have won the Capital One Cup, courtesy of a brace from their captain Euan Smith!" 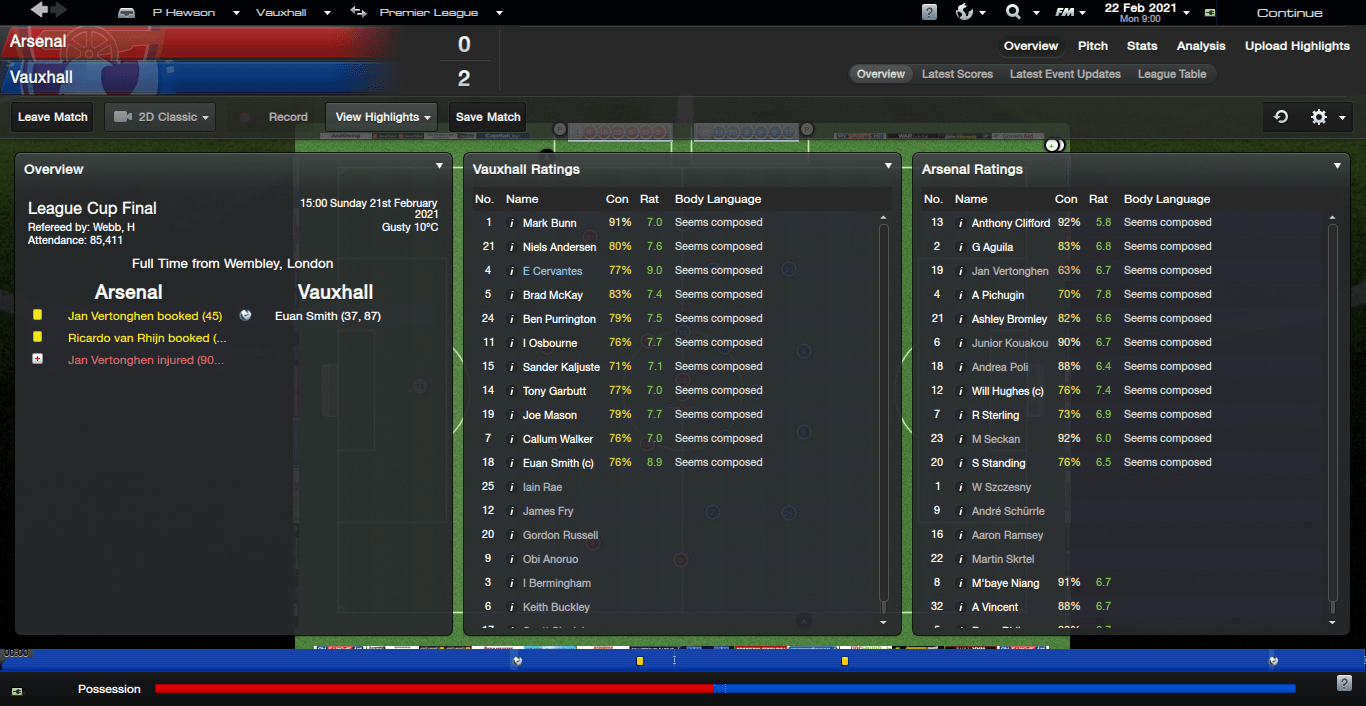 I'd love to be a fan of Vauxhall right now

Glenn T
9 years
Awesome commentary, and an awesome result too

Verdinho
9 years
Winning trophies like the FA Cup is what it's all about!
Login to Quote

Justice
9 years
Thanks guys, hopefully it will be the first of many!

RandydeB
9 years
Haha Arsenal lost out on what could be an easy to win Trophy, great performance from Euan Smith, I guess he became a very lucky man that evening

You know Euan, he's a phenom!

Paul Hewson: "I'm still shaking after that final, it was incredible. I'm used to crowds of over fifty thousand people at concerts when I'm performing, but eighty-five thousand football fans in one of the biggest cup competitions around is something else! I remember my first ever game as manager of Vauxhall, where we had just for fans at our game. Yesterday, we had over forty thousand fans at our game! It really is an honour to be in the middle of Vauxhall's evolution, and we can only improve!

We now have a very prestigious trophy in our cabinet back at Vauxhall Stadium, which I can promise you all will be ready to play in once again early next month! There will be some unbelievable European nights at Vauxhall Stadium, I can guarantee you that. To be able to play in Europe is what anybody dreams about, and we are so grateful to have the opportunity. The Europa League is such a huge competition, and one we will play our hearts out in.

We've come along way since that day in July 2012 when I signed my first contract here. I believe that we can become a club for all to admire, and we have taken many steps towards becoming that. We are no longer a semi-professional club in the Conference leagues, we are now a trophy challenging team in the Barclays Premier League, where we always dreamed of being. I hope that I have done enough to make the fans proud, and I can promise that I will always be committed to the cause!"

Jozef
9 years
Fantastic result mate, great work. I can't wait to see how you do in European competition. Good luck.
Login to Quote

k1rups
9 years
What an epic win! Vauxhall safe for another year and now get to test themselves in Europe! Looking forward to how Paul does
Login to Quote