Middlesbrough manager Chris Kamara has revealed he may be looking for a new job. Kamara, who was made redundant from Sky when the company went bankrupt, took the manager's job at Boro at the start of the season and has led them to the title but his contract is expiring and he may not stay at the club. "Of course I want to stay at Boro but if an offer comes in then I will definitely consider it, and of course I haven't even been offered a new contract yet so, I don't know what the future holds really." Boro's fans will surely not want Kamara to leave but if he is not offered a new deal then his future is not in his own hands. The question now is 'Will Kamara Stay?' Phone in to Talksport on 08717223344 to have your say.


He lives in Wakefield, He's always in the bookies behind my grandmas house betting on horses haha
Login to Quote

FMatthew:He lives in Wakefield, He's always in the bookies behind my grandmas house betting on horses haha


You seem quite knowledgable on the subject, maybe this time he can bet on whether Chris Kamara stays at Boro?

AlexSonwild
9 years
Great story so far. Keep it up

Middlesbrough fans will have cause for concern as successful manager Chris Kamara is poised to leave for Spanish outfit Levante. The club are sitting in 15th and Juan Ignicaio is under pressure but Kamara may be tempted by the hot Spanish sun. Although Ignacio hasn't left the club yet, there is a strong feeling in the Levante fans camp that Kamara will be joining soon. Boro have offered Kamara a new contract but he has stalled on making a choice as he looks for alternate options. Where will he go?
Login to Quote

Kamara wins manager of the year

Middlesbrough manager Chris Kamara has won the npower Championship manager of the year award. Kamara took over at the start of the year and led his boyhood club to the title with 84 points, and not losing until January, he has silenced all of his critics. Boro chairman Steve Gibson had been critiscised for his risky managerial choice, but the risk has certainly paid off.
Login to Quote

http://www.haymarket.com/images/brands/media/name/442_logo.gif
The football season is now over, and whilst some clubs contemplate what has gone wrong for them, others bask in the glory of success. FourFourTwo has hired some experts to analyse the football season.

At the start of the season I would have predicted Chelsea to use their Champions League victory as a springboard to success but they have finished even lower under new manager Marcelo Bielsa than they did last year, yet Bielsa stays. Brendan Rodgers has done an amazing job with my former club Liverpool and his former club Swansea have consolidated themselves now. It might be a good time for Sir Alex Ferguson to retire as United manager as they could only muster a 4th placed finish. I certainly did not expect Aston Villa to be relegated, and they were bottom for most of the season too.

It's been a brilliant season in the second tier of English football. Middlesbrough ran away with it but the rest was fantastic as pretty much every team was in the play-offs at some point. Bristol City were unlucky not to even make the play-offs because they were Middlesbrough's closest rival. Leeds were poor all season and deserved to be relegated, as did Barnsley, but Sheffield Wednesday were very unlucky to go down, they were ahead of Peterbrough for most of the season.

By the time I came to play in the lower leagues with Notts. County, I had already won the European Cup with Forest, but it taught me so much about football. Tranmere and Crewe both did better than expected, especially Tranmere who unbelievably topped the league. Credit has to go to manager Ronnie Moore because he hasn't had much to work with but he has done brilliantly. I expected better from MK Dons though, but I am pleased with the progress made by County, and I can see a play-off push next year. 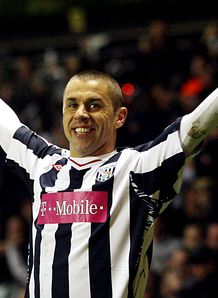 The League Two season is finally over, and Barnet will be disappointed with their relegation as they normally survive on the last day. Plymouth have done well on a limited budget and Chesterfield have gone straight back up, but York were the surprise package of the season finishing in the top half.
Login to Quote

JasonRM
9 years
Keep up the good work LJO, good luck in the prem!

The Special one: Don't go.Levante are broke

Ha! I'm not sure whether I will leave Boro to be honest, and if I do, there is a few clubs I could go to with a little more money than Levante.

The Madridista:Keep up the good work LJO,good luck in the prem!

Thanks, but will I be in the Prem next season or will I be somewhere else?

I will not. I want to use Carlos Fierro and if I leave I won't get to unless I go to a club that can afford him, which Levanté can't.
Login to Quote

Kane
9 years
Not Levante. Kamara needs to be at somewhere like Barcelona.

Nevertheless, some great updates, keep up the good work!
Login to Quote

Devil.:Not Levante. Kamara needs to be at somewhere like Barcelona.
Nevertheless, some great updates, keep up the good work!


Thanks, I don't think I'll get the Barca job but I don't really think Levante's squad is that good so no, I won't go to Levante.
Login to Quote

April and May: Champions!

Manager's notes:
UNBELIEVABLE! We won the npower Championship with 2 games to spare, and while we lost those 2 games, I was happy with our performances. We were promoted to the Premier League and that was all that mattered.
Unbelievable Player Of The Month:
New signing Harry Kewell returned from his injury and promptly got injured again, but in between he played magnificently and scored a goal and was awarded man of the match against Watford. His performances have shown why he has won the Champions League.

Unbelievable Goal Of The Month:
Harry Kewell vs Watford. Beats 2 players and plays a 1-2 with Emnes before slotting home.
Login to Quote