DeanByrne1995
7 years
Good luck in the story of the month Glenn, another month where your quality of writing has been second to none. Good signing in Isco, looking forward to seeing how he plays when he's reached his potential.
Login to Quote 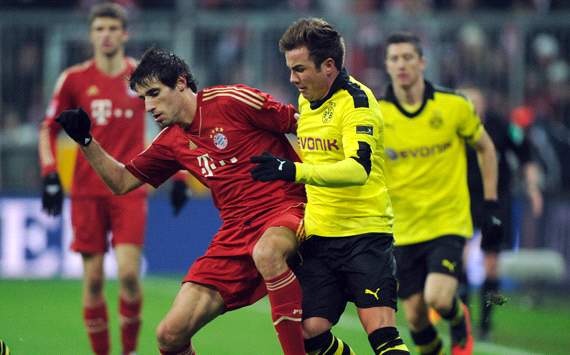 The 22-year-old is already a star despite his young age, and also a French international, representing France at Euro 2020.

Jehanno started his career at hometown club FC Lorient and after breaking through into the first-team, took advantage of his contract expiration to link up with Borussia Dortmund in 2017.

It took awhile for Jehanno to settle in, but when he did, it reaped rewards. In his second season for Dortmund, Jehanno scored 19 goals in 26 Bundesliga appearances, and last season, his third season, the former France Under-21 player hit in 20 goals in 31 appearances to earn himself a call-up for Euro 2020.

However, he has grown frustrated with life at Dortmund with the failure of their promise to deliver trophies. Bayern Munich swooped in, and after much negotiating, Die Borussen finally relented on selling their key player to their rivals, albeit for a much higher fee than the 13 million they'd initially demanded for him.

But to Beckham, 16.5 million will be a bargain, considering the amount of his transfer warchest, which is rumored to be up to 50 million, even after a 34.5 million deal for fellow summer recruit Daniel Montero.

Jehanno is expected to serve as the main force of Bayern's attacking force, alongside Ademilson in a two-man striking partnership. 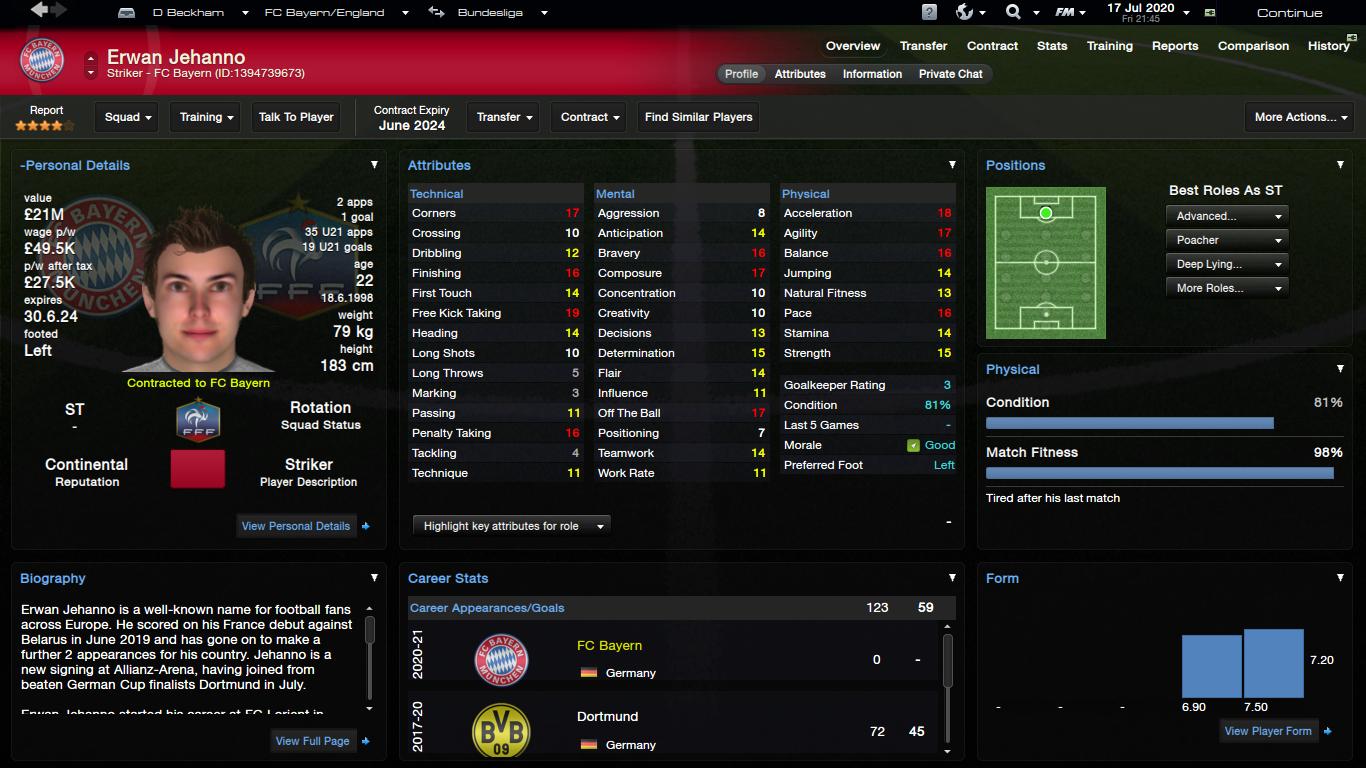 Some fans have publicly disapproved considering the fierce rivalry between Bayern Munich and Borussia Dortmund, as well as the fact that Jehanno has frustrated plenty of Bayern fans before with his goal-scoring talent for Dortmund. Fortunately, a majority of the Munich club's fanbase are unable to deny the talent of the former Lorient striker, and has welcomed him to the Allianz Arena.

Along with Jehanno, Serbian left winger Filip Celekitic has joined the club for a fee of 9 million, from Ukrainian side Metalist.

Celekitic is a fully-fledged Serbian international and represented his country in Euro 2020. He came face-to-face with Beckham in the tournament as Beckham's England team beat Serbia 2-0 in the Quarter Finals.

Only 23, Celekitic has already played for 5 different teams. Starting his career at FK Partizan Beograd, Celekitic moved on to FK Teleoptik Zemun in 2016. He was quickly loaned out in the same year, getting his first taste of German football as he played temporarily for Bundesliga side Frankfurt. As little more than a backup player, Celekitic made 6 appearances, but impressed by scoring 3 goals.

It was at Metalist that he got his big break. Joining the Ukrainian Premier League club in 2017, he was given opportunities and eventually established himself as a key player at Metalist.

His eye-catching performances on the left wing soon earned him a call up to the Serbia squad in November 2017, just a few months after his arrival in Ukraine.

Playing in Ukraine has done very well for Celekitic's career, going from a nobody in football to one of Europe's hottest young prospects. He will now look to continue the development of his football career at Bayern Munich. 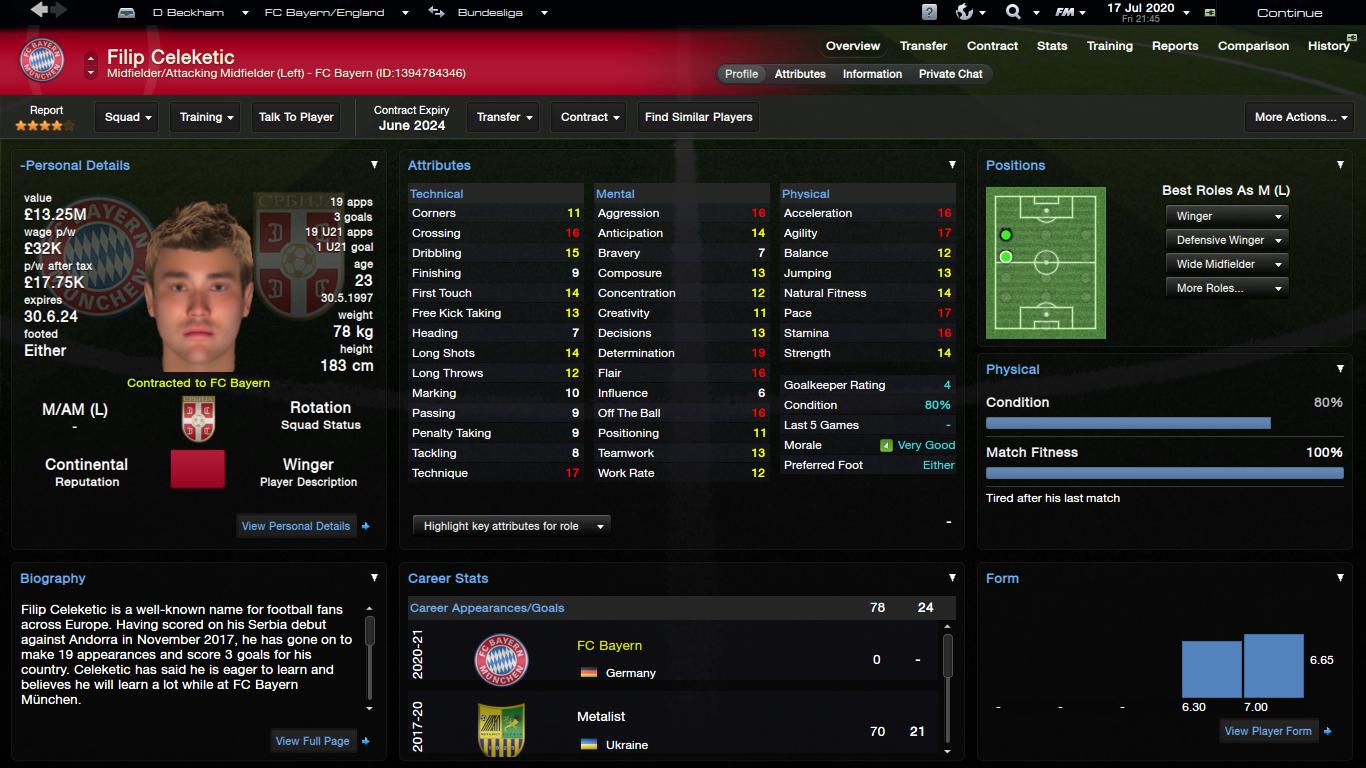 Two very significant captures of two fantastic young players. Beckham can pat himself on the back for his transfer business so far.

Aside from Eros Baldoni and Federico going on loan to Stade Rennais FC and SK Rapid Wien respectively, there have been no departures out of Bayern yet, but according to sources, this could change very soon...
Login to Quote

Jozef
7 years
YUM,YUM, 2 really good signings there Glenn, especially Jehanno, what a player. Ademilson is gonna have some competition.
1
Login to Quote

Just gave you your 69th thank you! 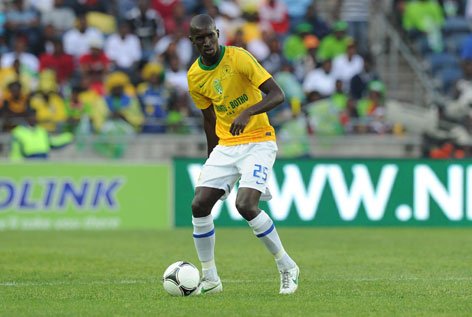 Bayern have spent a total of 60 million this window but so far, no departures have been concluded.

However, this is certainly set to change. With the new Bayern Munich recruits, fringe and rotation players are set to leave the Allianz Arena.

A host of clubs are interested in various players and David Beckham will be happy to sell some of them.

Siyanda Xulu was fantastic in Die Bayern's quadruple-winning season, as usual, but the South African defender will play more of a bit-part role this year with the emergence of Fedele Lenti. Now, with the arrival of Daniel Montero, Xulu's first-team chances are only hindered further, and Beckham might find that it's time to move on the 28-year-old.

Xulu had humble beginnings playing in his native South Africa, turning out for South African Premier League clubs Kaizer Chiefs and Sundowns. He transferred to Russian Premier League side FC Rostov in 2012. Rafa Benitez brought the defender to Bayern Munich in the summer of 2016 as one of his first signings, and fans immediately criticized the Spaniard for his lack of transfer ambition, stating Xulu "did not have the quality" for a club like Bayern Munich. The criticism only intensified as Xulu failed to impress in his first season for the Bavarians, making 22 league appearances as Bayern finished 7th.

But he would prove to be the only bargain in Benitez's host of flop signings, and went on to become one of the best players at Bayern Munich when Beckham joined the club in November 2017. Xulu's solid performances in defense helped Bayern to recover immediately from their previous year's 7th-placed finish, and they finished 2nd this time. At the end-of-season awards, Xulu was awarded the Bayern Fans' Player of the Year.

A fan favorite, fans of the Bavarian giants won't be too happy if Beckham eventually decides to sell the South Africa international.

Plenty of clubs are interested in acquiring Xulu's services. Liverpool, Barcelona, Chelsea, Aston Villa, Valencia and Tottenham are among the front runners, while CSKA Moscow and Spartak Moscow want to tempt him back to Russia.

Mattheus is another player tipped to leave Bayern Munich this season. He has been little more than a rotation player during his two years at the Allianz Arena, having made 49 Bundesliga appearances over 2 seasons. However, when he has played, he has been a brilliant player.

The Brazilian also won his first cap for Brazil this summer, and should he decide to leave, Manchester United and Everton will be happy to offer him a return to England, where he was successful with Aston Villa. 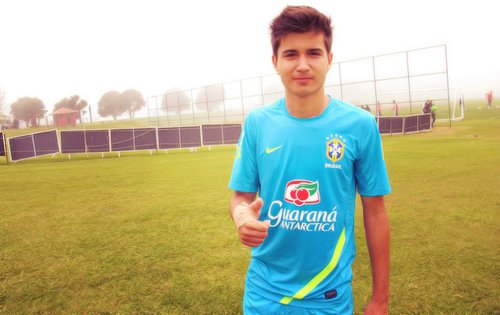 English midfielder Will Hughes was an instrumental player throughout Bayern's domination in their quadruple-winning season.

The 25-year-old also represented his country in Euro 2020, and having made 60 appearances for Bayern so far, Beckham will be determined to keep him at the club.

But Tottenham and Manchester City are very interested in Hughes. 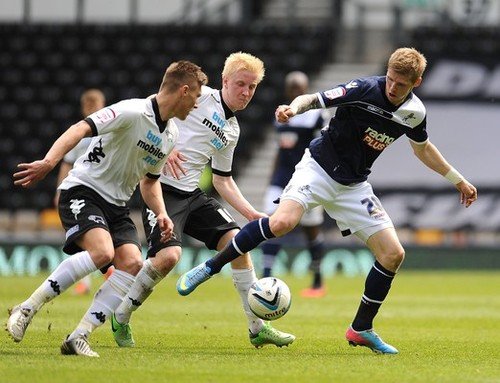 The former Derby man enjoyed a 5-year spell with Aston Villa in the Premier League, making 128 appearances for the Villans. A very versatile player, he can play in various positions but has primarily been used as a left winger by Beckham last season.

Hughes has only recently stated that in spite of his great time at Bayern Munich, he would be "keen" to return to England someday, and his words will only boost City and Tottenham's confidence in landing their transfer target.
Login to Quote

No1VillaFan
7 years
Awesome season and good luck in story of the month, will be a shame to see hughes go maybe he will resign for villa?
1
Login to Quote

Are you sure Hughes is going though?

Are you sure Hughes is going though?

I hope he stays though
Login to Quote

wellsy1498
7 years
Please keep hold of Hughes he is too good of a player to sell.
Login to Quote

k1rups
7 years
Some great signings there mate! Loving the work done in the transfer window as always

Justice
7 years
Hughes leaving? I guess it means you can afford Spearing now

Glenn T
7 years
Wellsy: I don't plan on selling him

Krupesh: Thanks for the nice comments as usual!