Neal
8 years
Amazing cup runs mate! Next year the Premier League will start to crumble before you

In a remarkable month for the club, Aston Villa have secured the first ever treble in their history under David Beckham of the Capital One Cup, FA Cup and the Europa League. Although losing their last match to rivals West Bromwich, Villa fans will still be very happy reflecting on this past month. The treble is not something you get every day, after all. Although finishing a very unpromising 12th, more cup glories seem to be on the horizon for Villa. 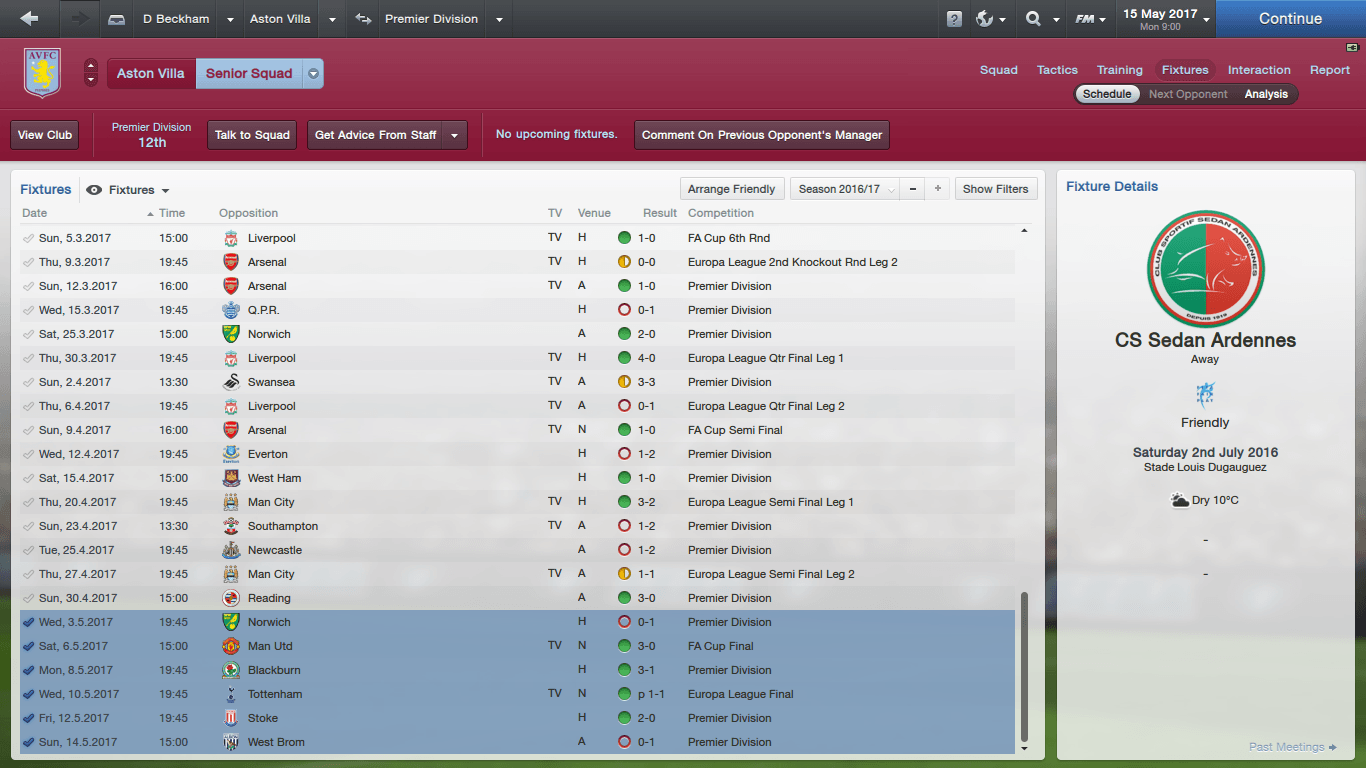 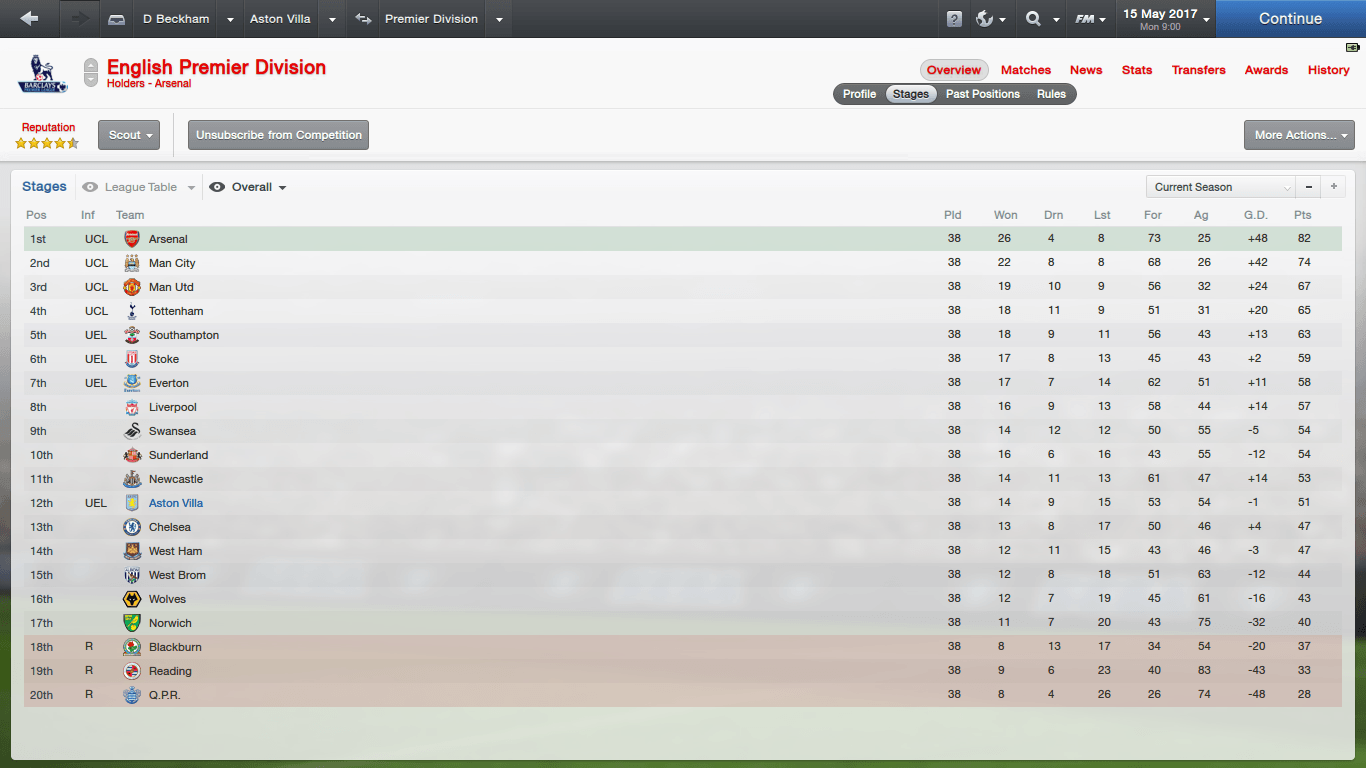 Always good to beat united and spurs
Login to Quote

Jesus Blanco won the Young Player of the Year after putting in a series of brilliant performances throughout the year, and was also named alongside Francesco Bardi within the substitutes of Team of the Year. 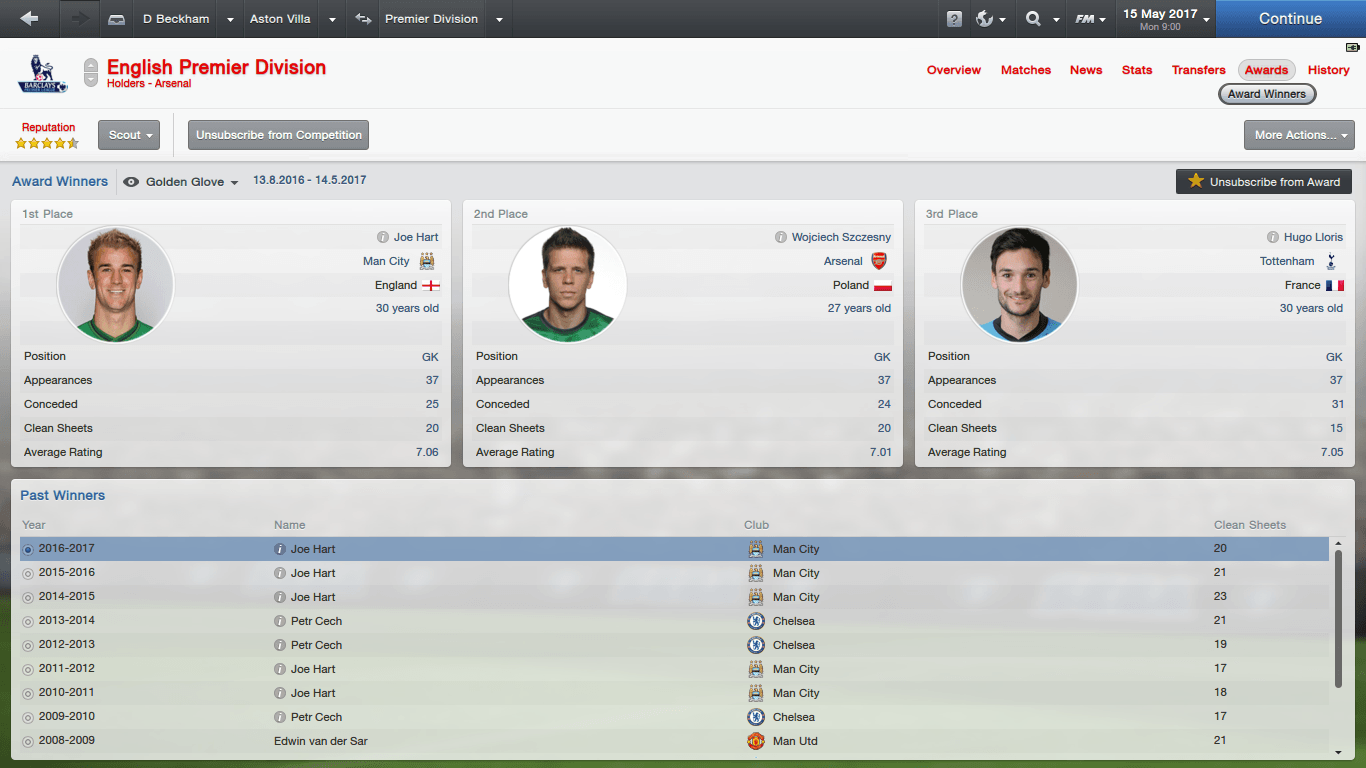 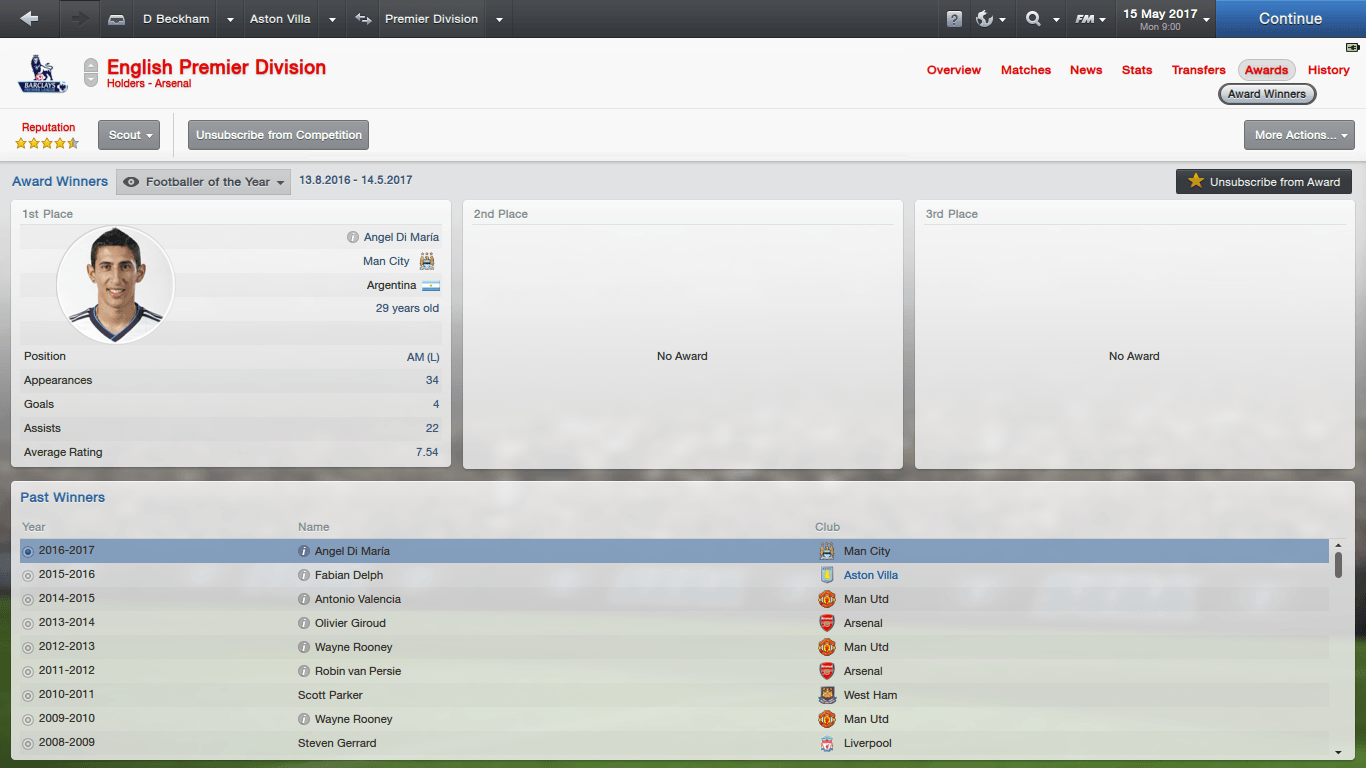 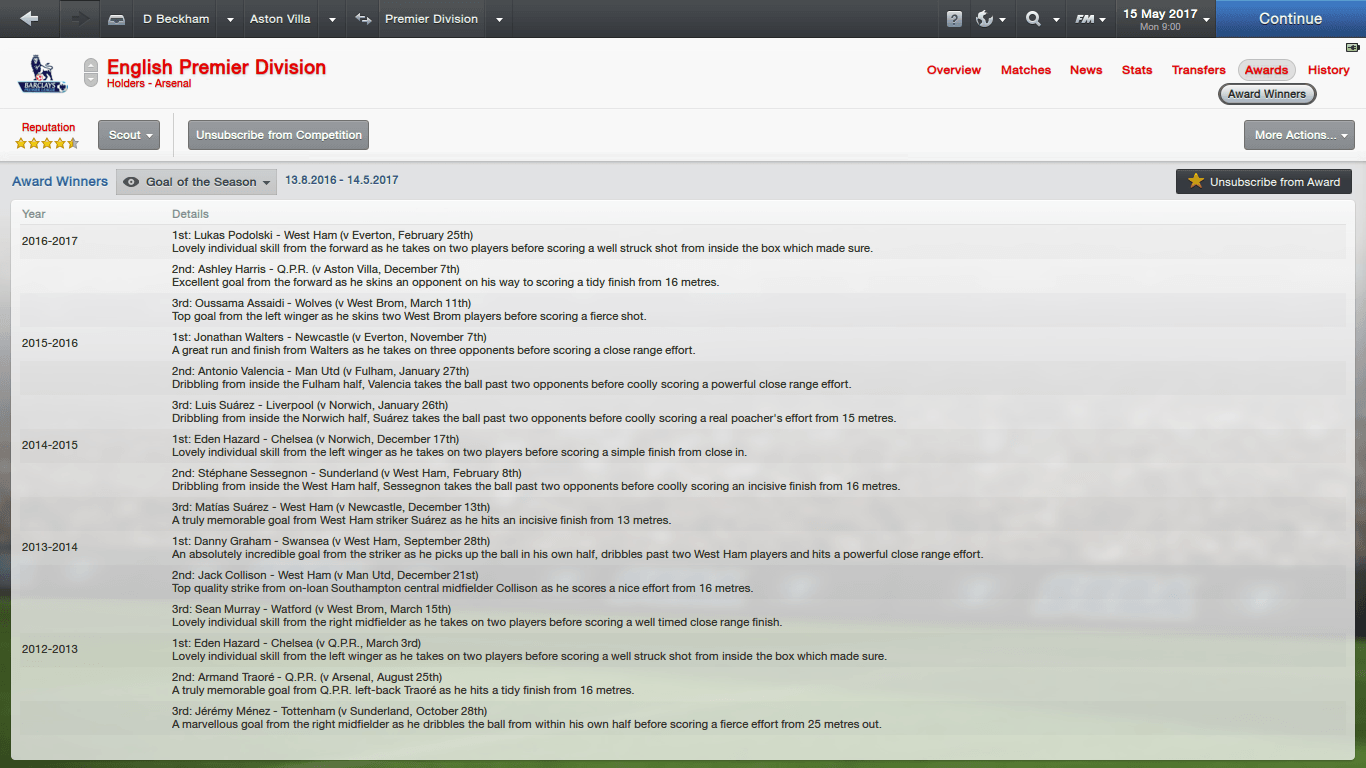 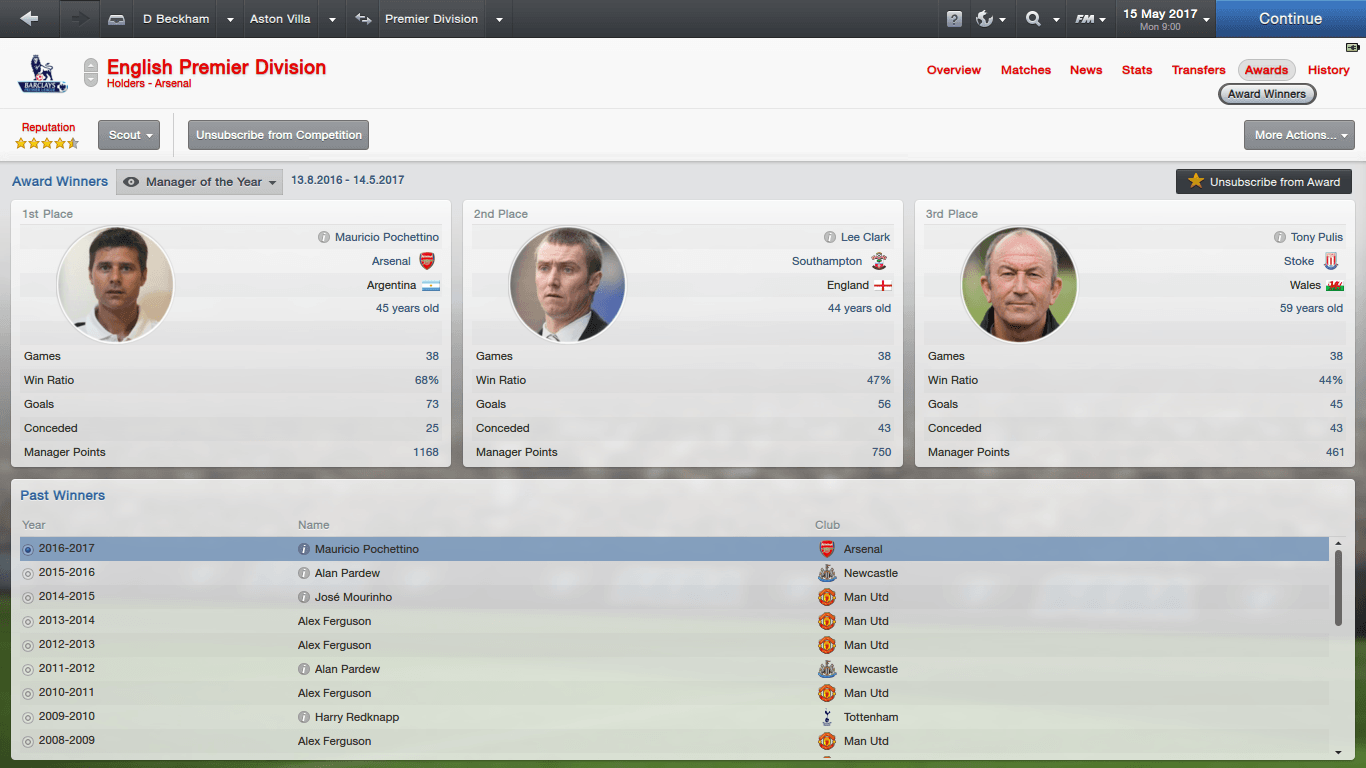 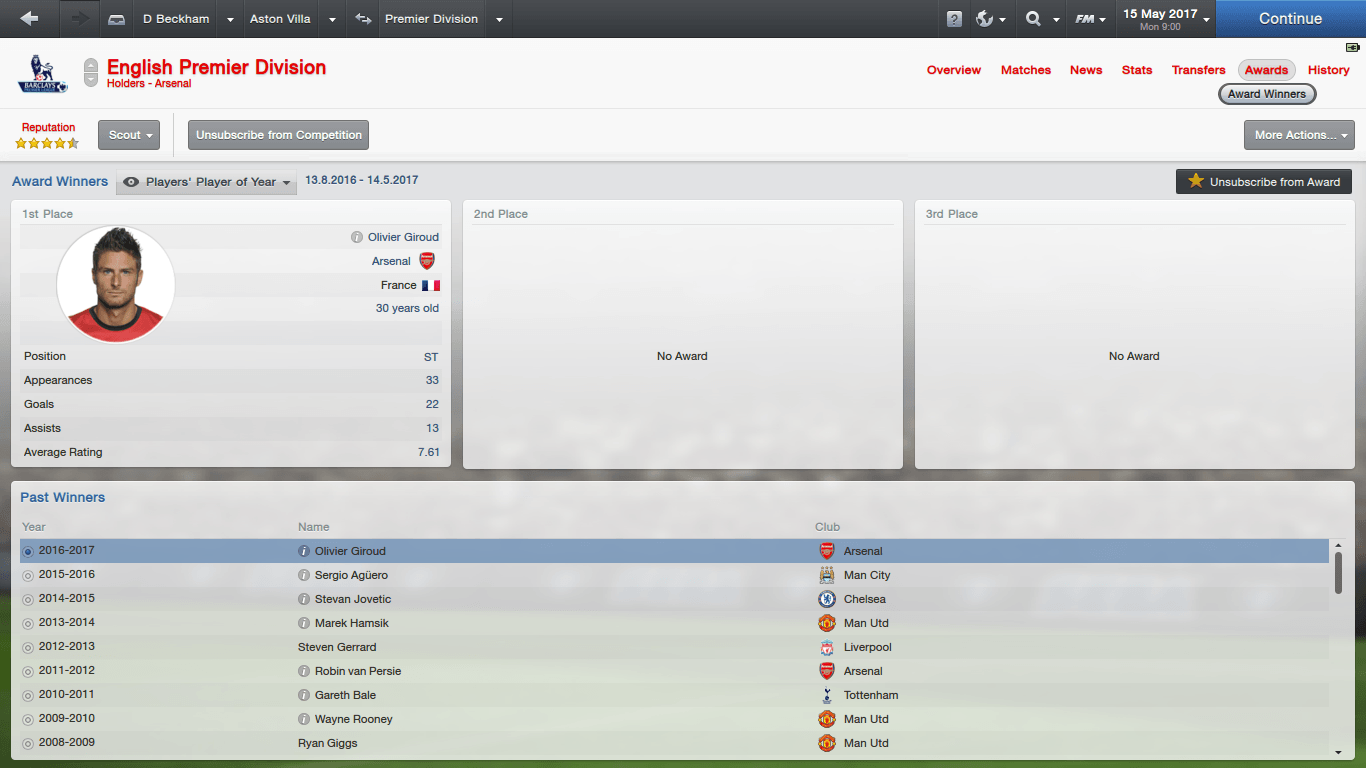 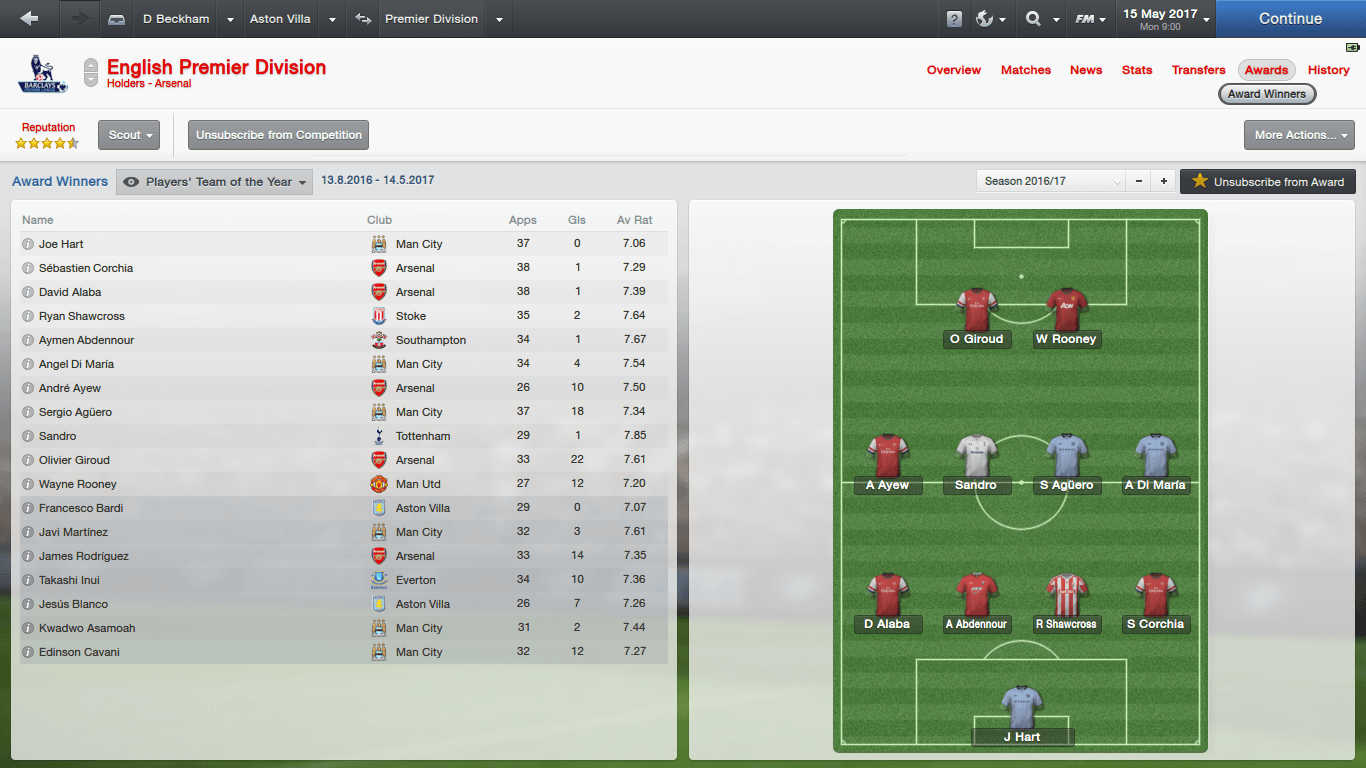 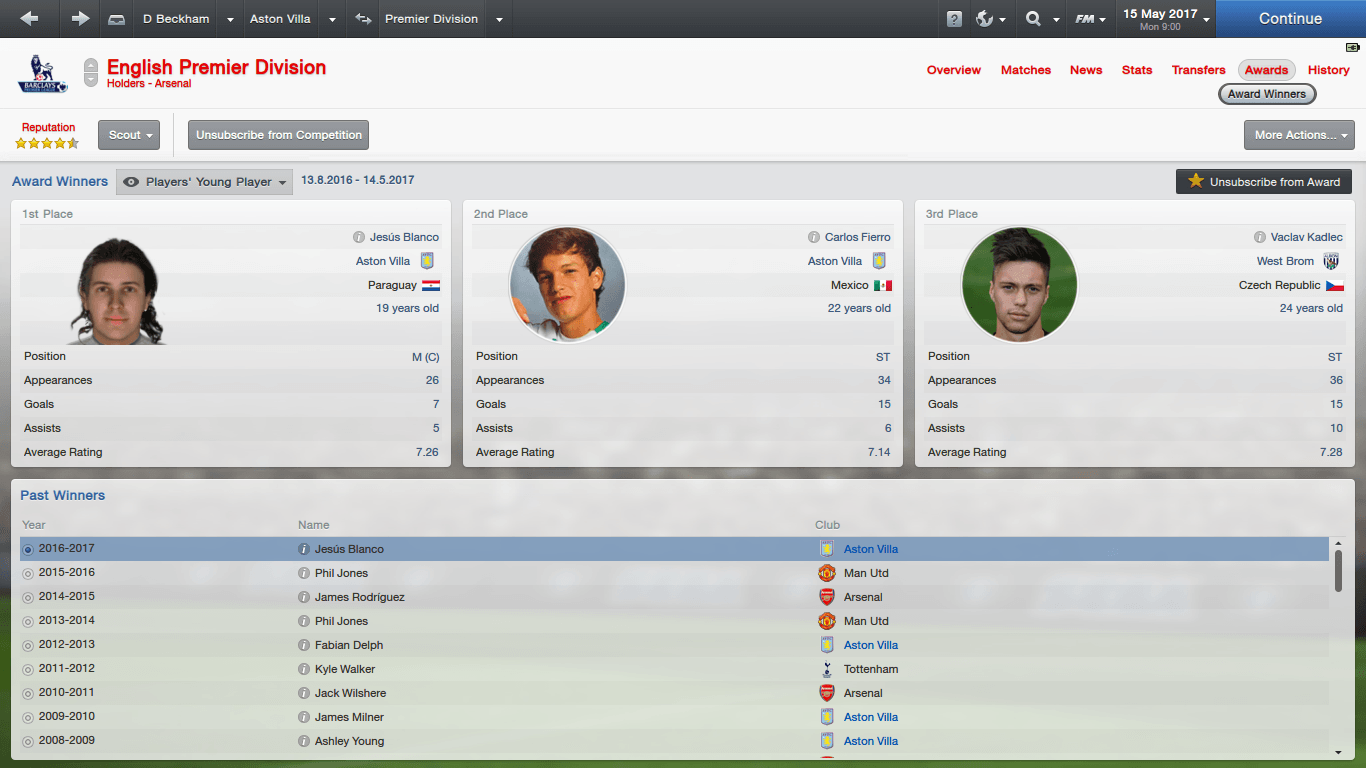 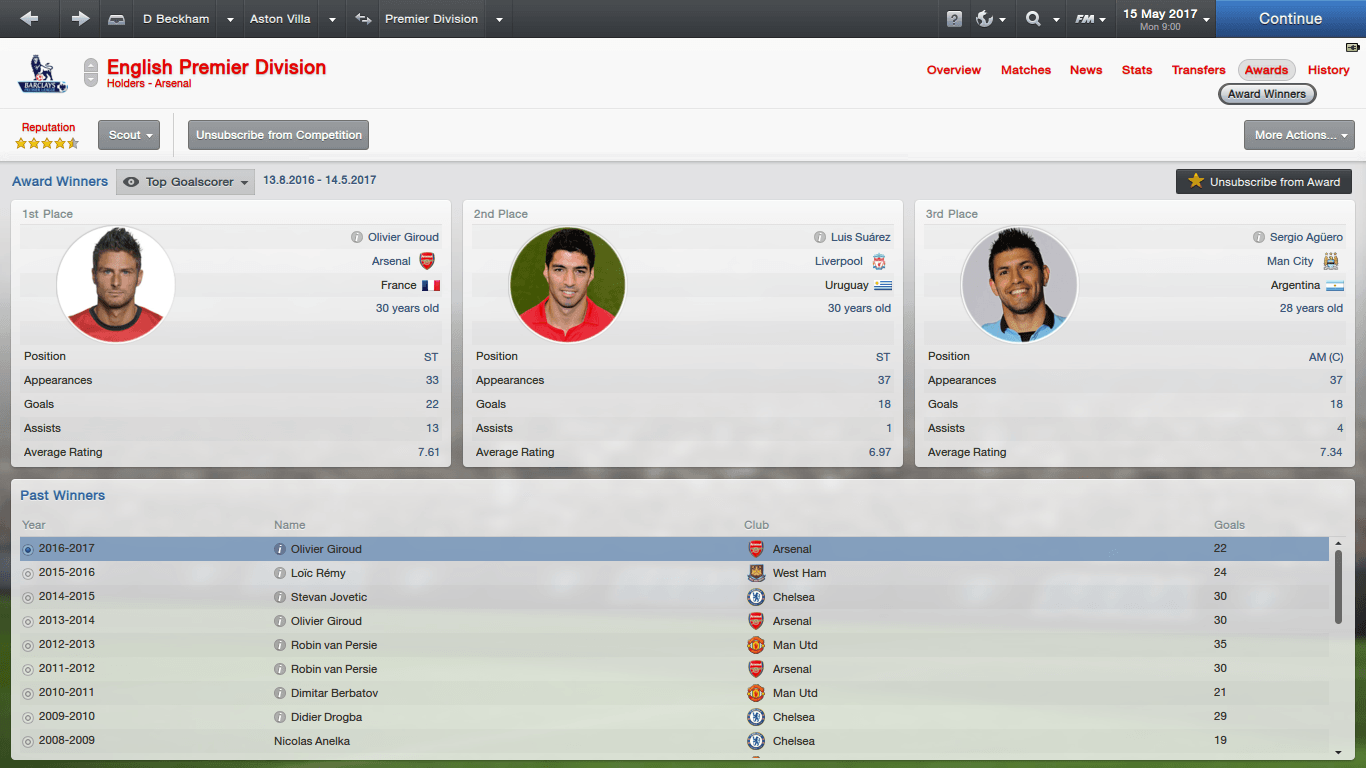 TheMS99
8 years
What did I tell you? It was a bad patch. Who cares if you finished 12th, when you win the treble

The villa fans would cry if you left now.
Login to Quote

Jer
8 years
Now focus in the EL, PL and a cup

Glenn T
8 years
Thanks for the great comments guys 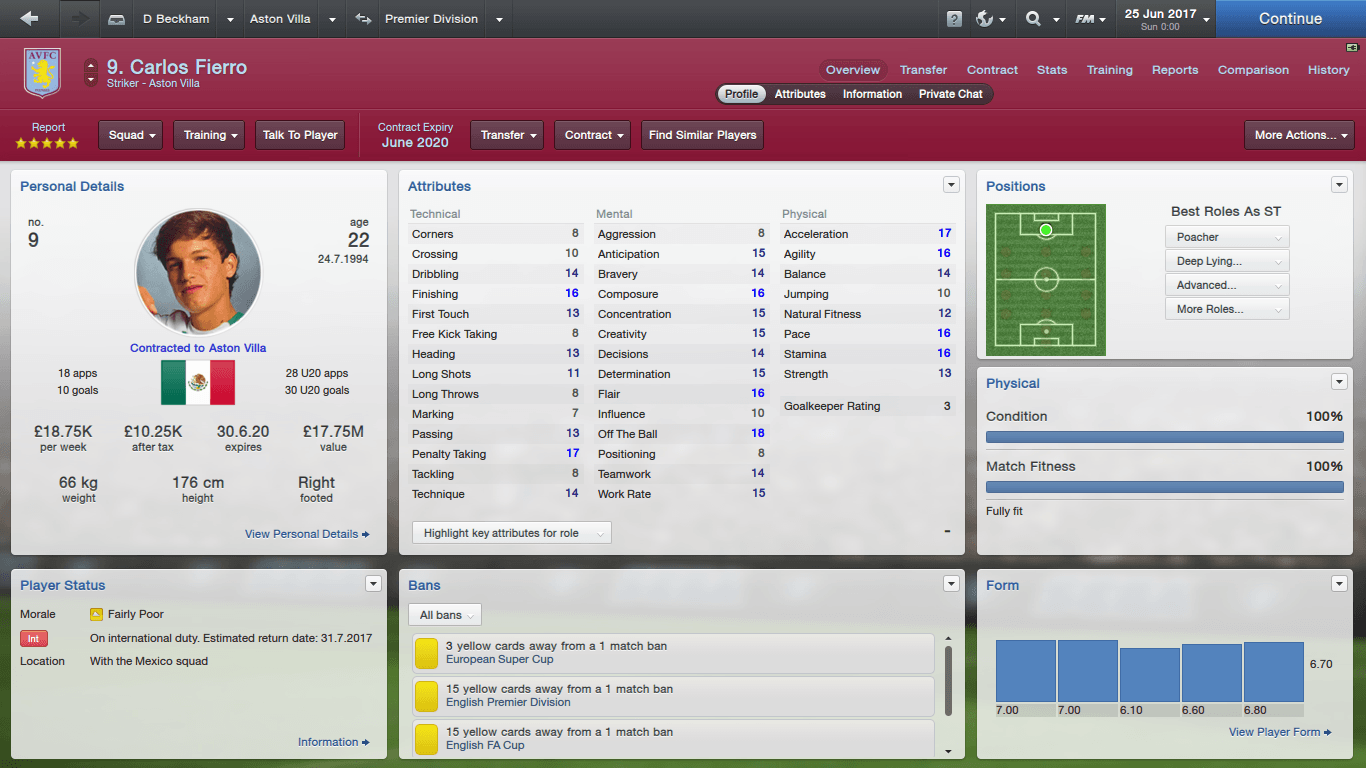 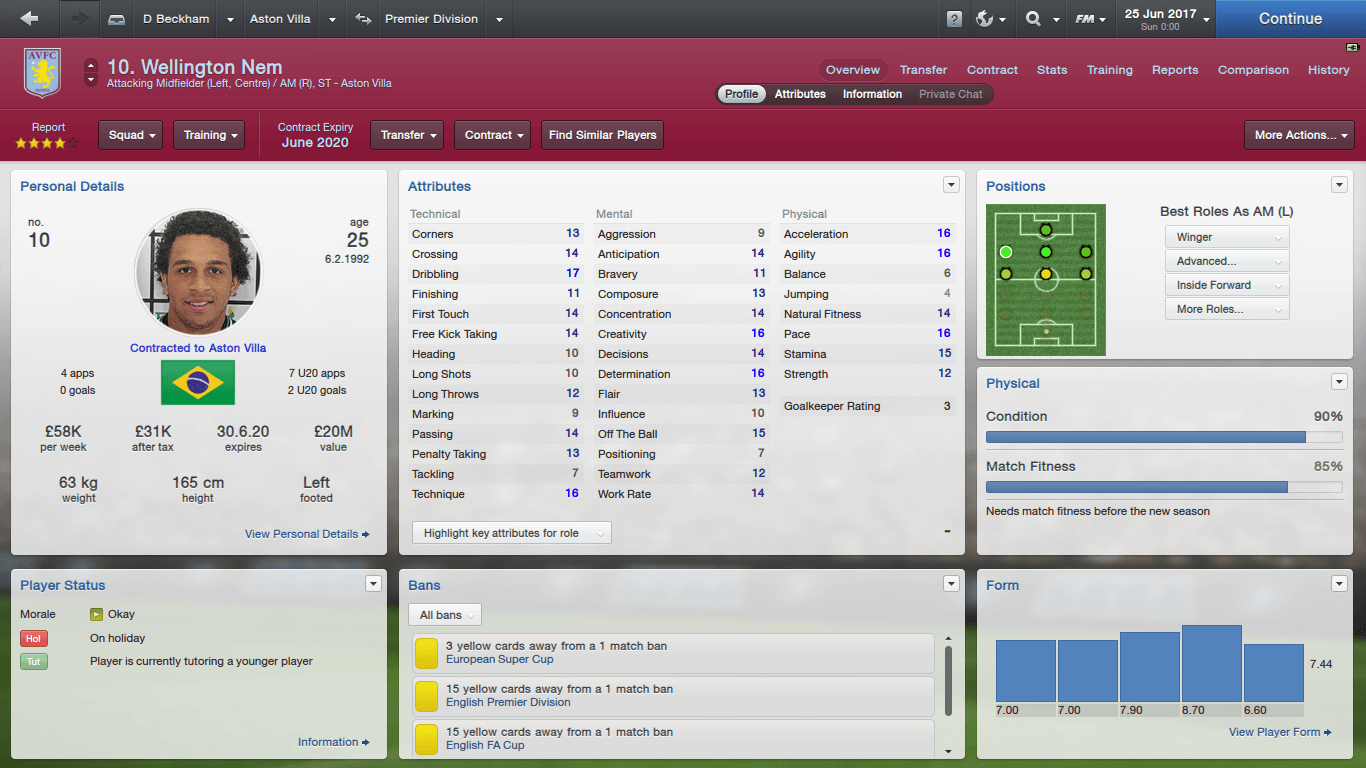 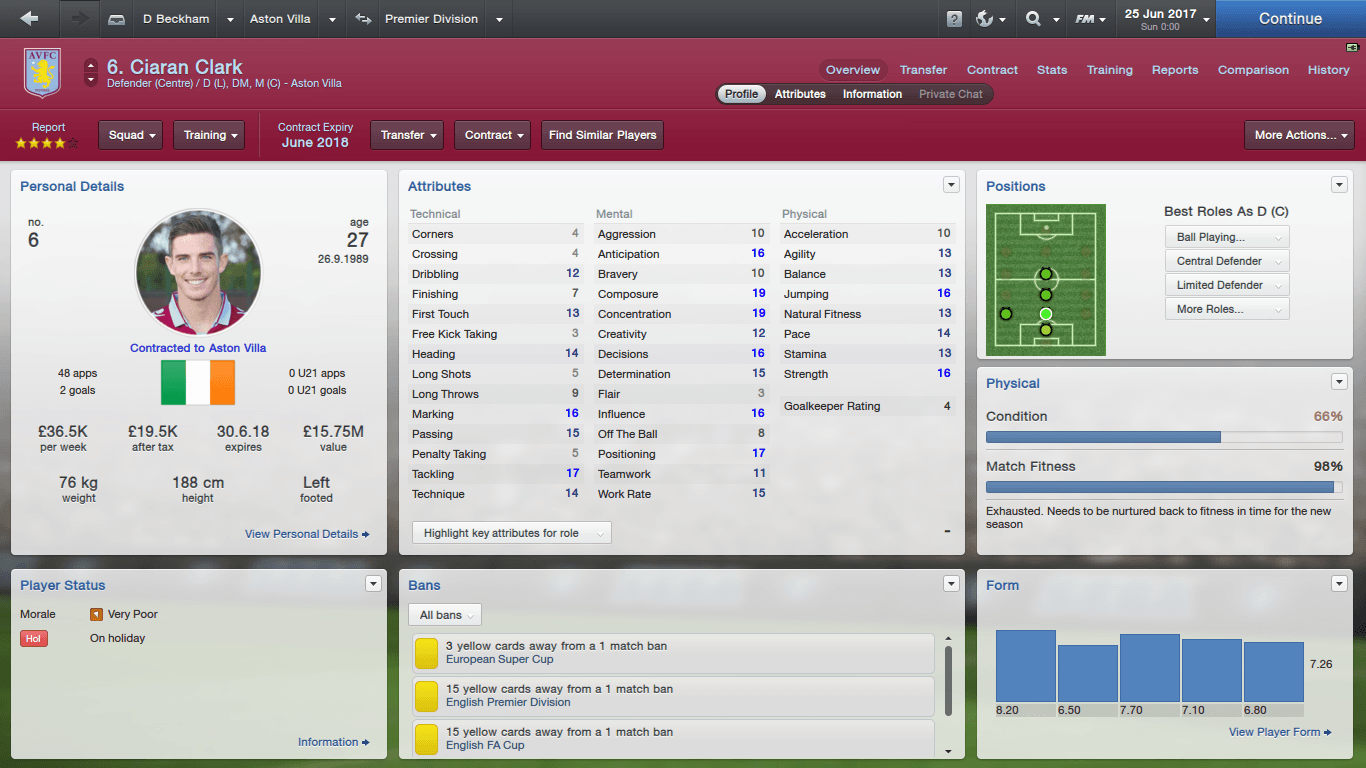 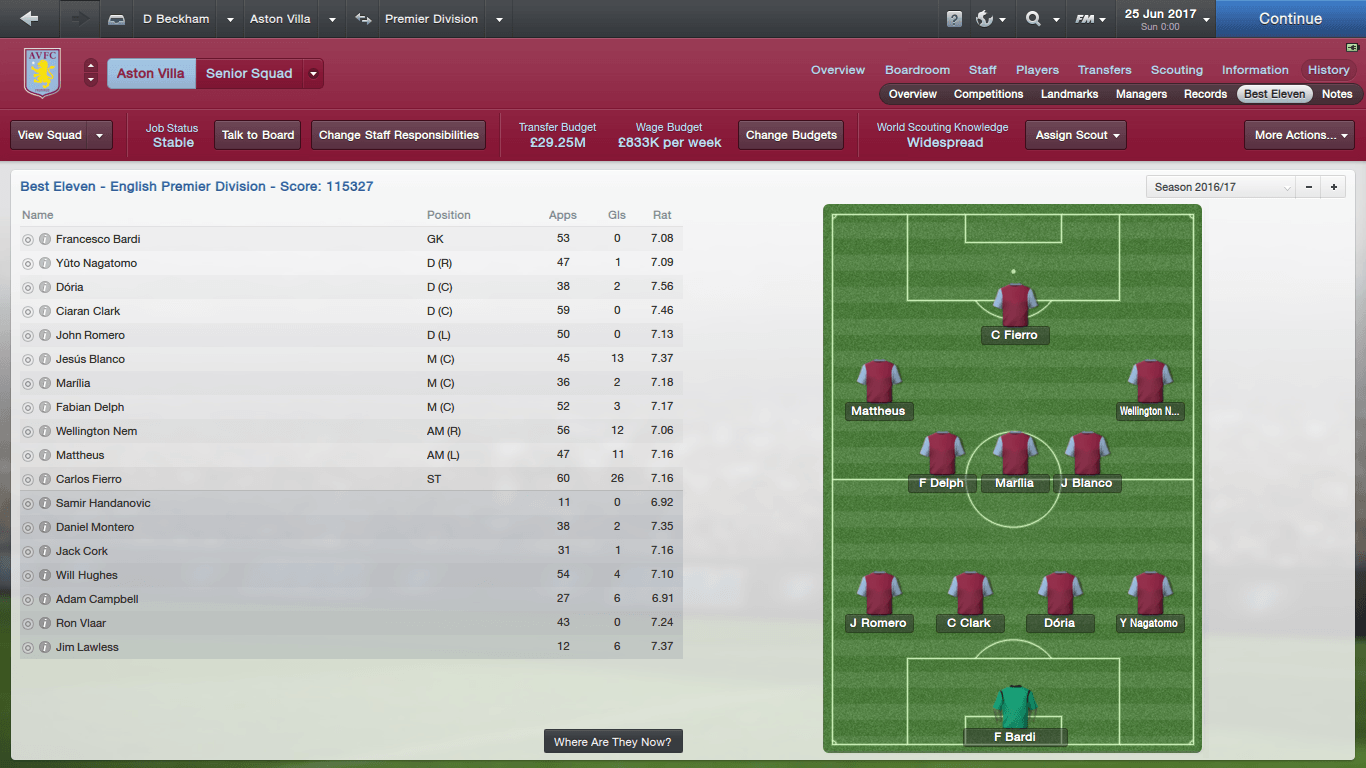 Beckham: I Will Stay 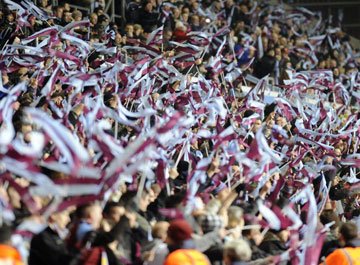 When offered a contract by Borussia Dortmund in March, David Beckham convinced Der BVB chairman Reinhard Rauball to put it off until the end of the season after long talks in Germany and England. However, the Aston Villa manager, who had an eventful May where he celebrated his 42nd birthday as well as Villa's first treble win, has now rejected Dortmund. 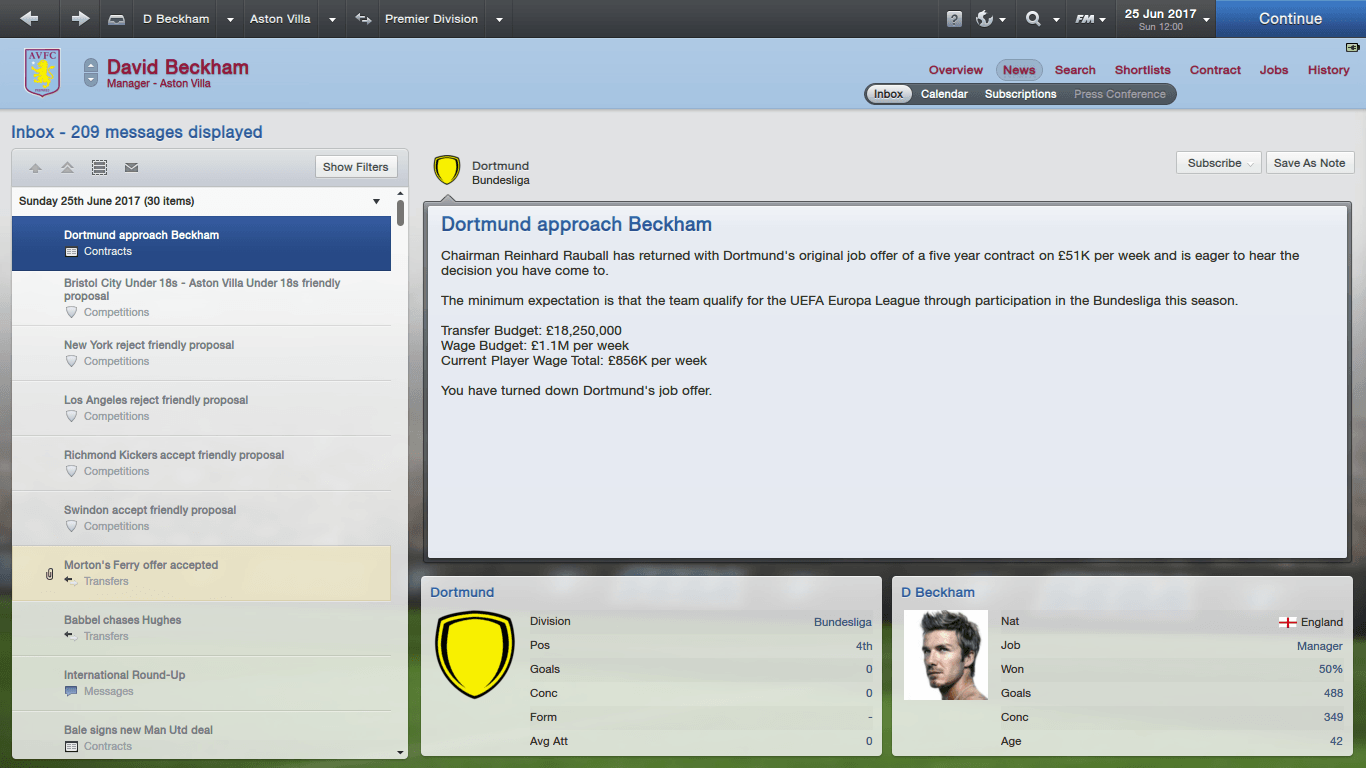 The former Manchester United star was the first manager of Aston Villa to lead the club to a treble after they won the Capital One Cup, FA Cup and Europa League last season.

Dortmund wanted the promising Englishman to take the hot seat at Signal Iduna Park after the sacking of Laurent Blanc, but Beckham has now opted to stay with Villa. 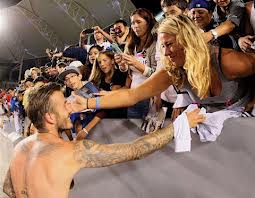 His decision will have delighted both Villa fans and players, as well as chairman Randy Lerner.

When interviewed about this, Beckham only had these two sentences to say:

"I won the treble last season. How could I leave after a time like this?"
Login to Quote 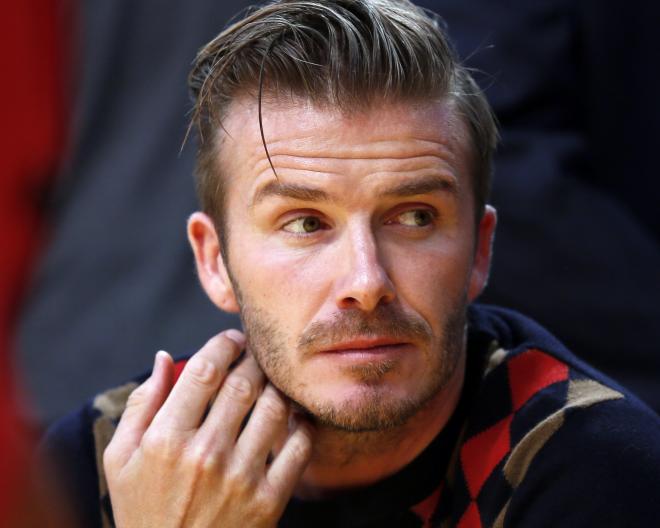 Aston Villa and David Beckham have splashed the cash once again, with a total of 15 million being paid for three incoming youths.

20-year-old Mohamed Megahed comes from Egyptian league side Zamalek and is already an established Egypt international. The promising midfielder, however, will need a work permit before he can play for Aston Villa, and Beckham might look to loan out the youngster to a club in Croatia or Belgium in the January transfer window to gain a permit. 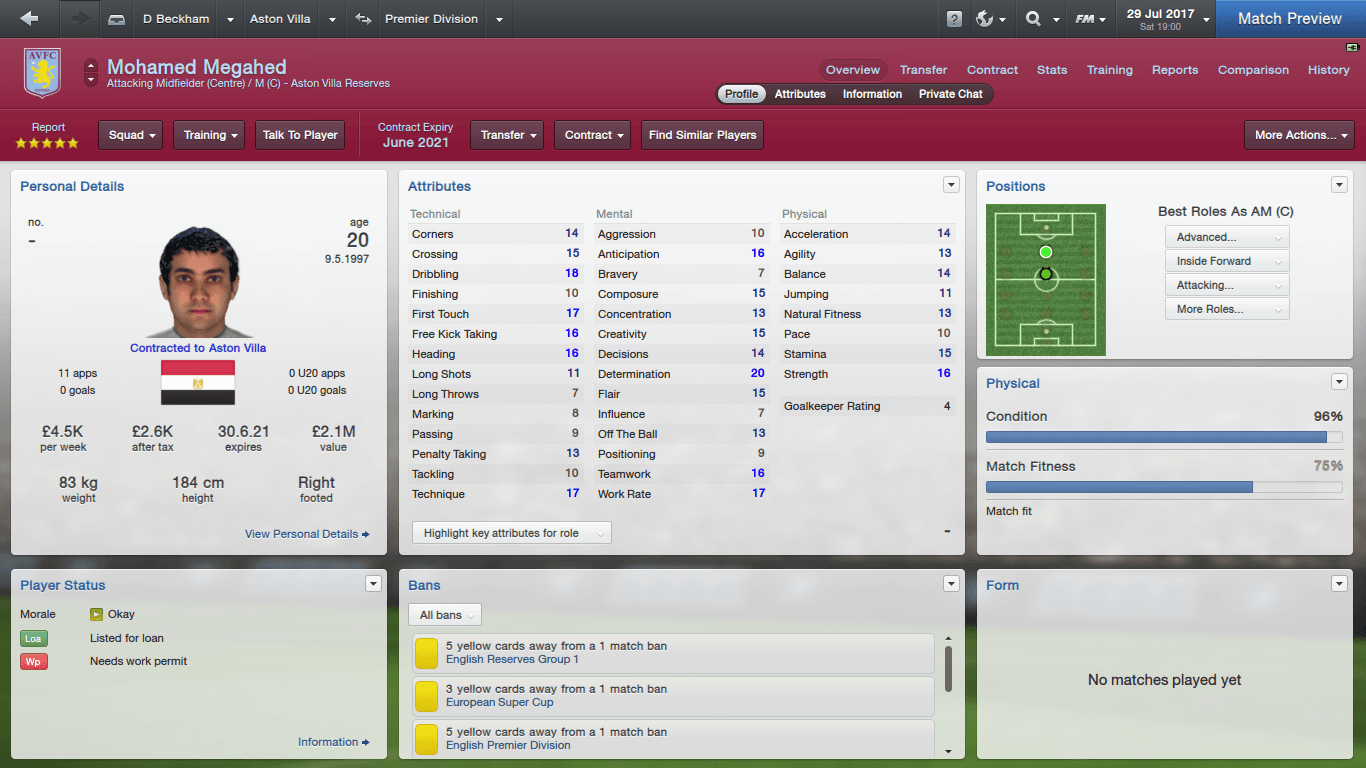 "I am very happy to come here," said Megahed in Arabic. "I hope I can get a work permit as soon as I can so I can start playing for Aston Villa."

England Under-19s international Glyn Pyle has also joined for 5 million, quite a fee for a 16-year-old. The Walsall-born joins from Midlands rivals West Bromwich, after making 1 senior appearance for the Baggies, something that is sure to infuriate the Bromwich fans. 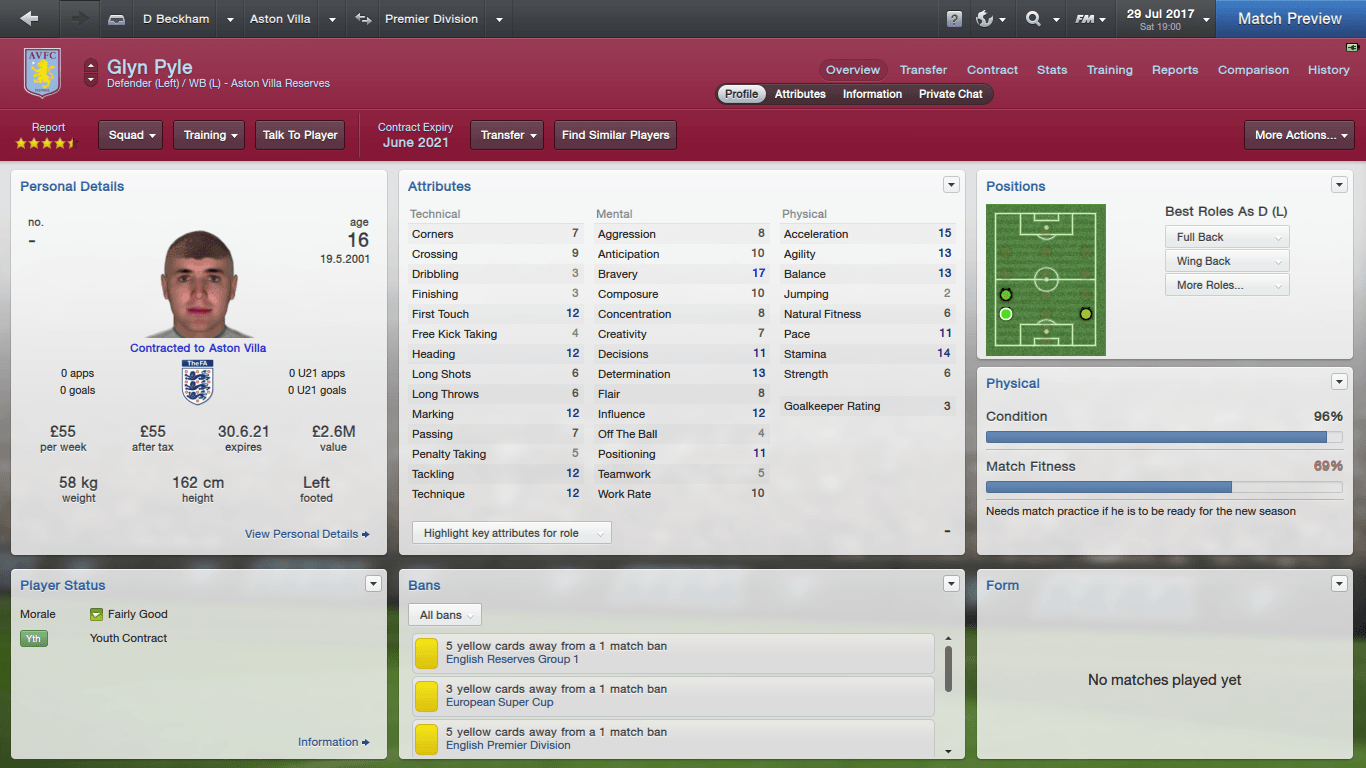 The left-back will turn out for the Under-18s this season but is tipped to make a quick ascend to the senior team, possibly providing competition for John Romero.

"I'm very excited," Pyle reveals. "Aston Villa won the treble last season and to have someone like David Beckham as the manager is absolutely fantastic. They were the reasons I decided to come here. I hope I can be a first-team player here as soon as I can."

His fellow England Under-19s teammate Bradley Marsh has also joined Villa from Liverpool, but for a very different fee, with Beckham stumping up a stunning 9.5 million for the 18-year-old defender.

Marsh was highly rated by coaches at Anfield but has now decided to make the move to Villa Park after Liverpool boss Frank de Boer succumbed to the big fees Beckham was willing to pay. 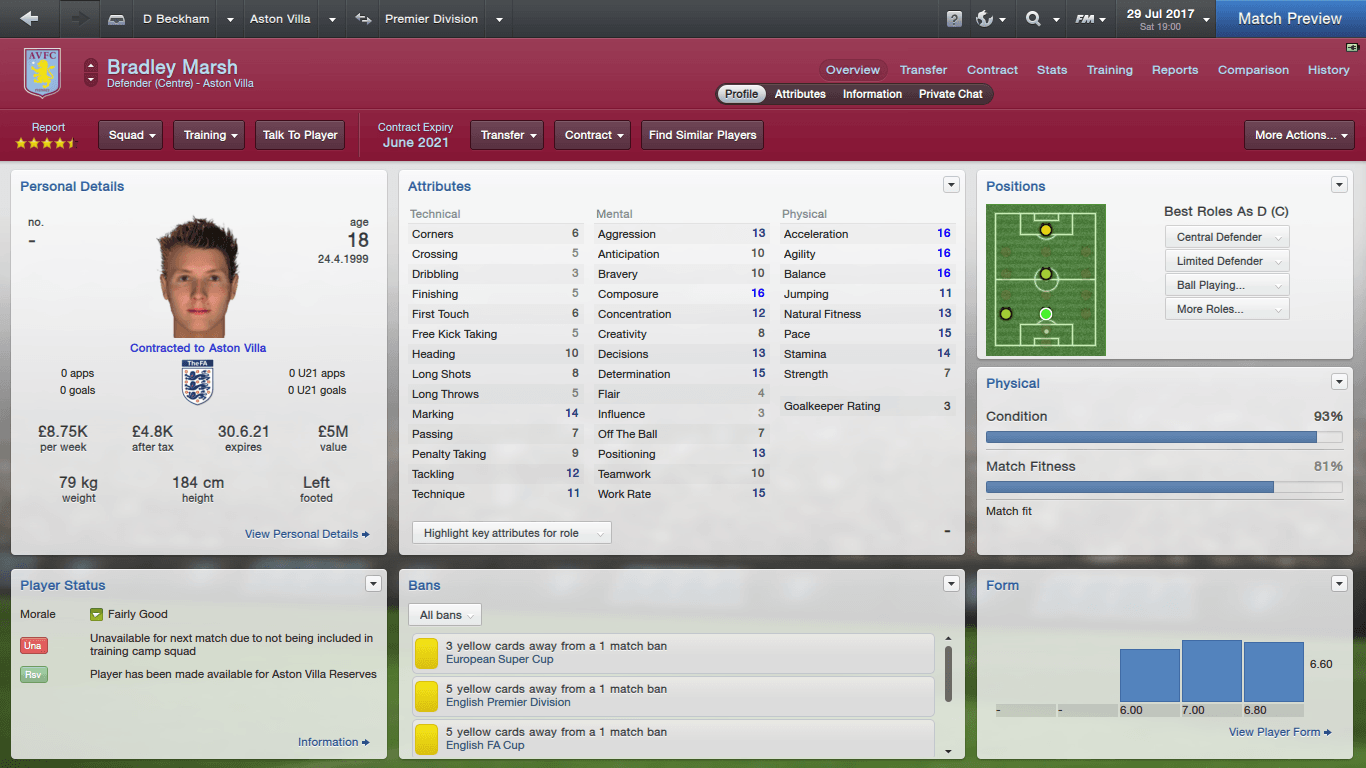 Marsh, unlike Pyle, is almost certain to be in the first-team this season, what with his inflated transfer fee.

"The gaffer has said I will be used in the senior team this season," he confirmed. "Liverpool was a great club but I'm looking forward to a new chapter with Aston Villa. I hope I can win a lot of trophies here."

That's 15 million spent by Beckham so far in the window.
Login to Quote 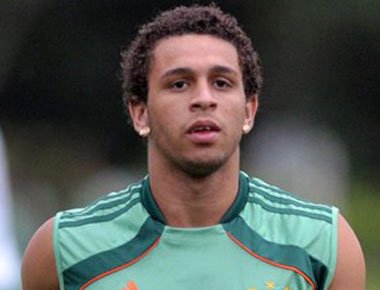 Aston Villa boss David Beckham has said that he is "determined to hang on" to his star players with top clubs left and right preparing to queue up for some of the first-team players in his squad.

An example is Wellington Nem, who has been a revelation for Aston Villa since joining in 2012. His technique and ability has made him a quick fans' favorite at Villa Park, and he will be celebrating his sixth summer as a Villa player this month. However, current title holders Arsenal are very interested in bringing the 25-year-old to the Emirates.

"We've been tracking his progress for awhile," Arsenal boss Mauricio Pochettino had admitted. "He's full of ability and he would do very well in a top European side. He deserves to be in a squad challenging for the Premier League and the Champions League."

Beckham has reacted angrily to the former Southampton boss' comments.

"Pochettino should stop trying to distract my players, especially Welly," he scoffed. "Welly is fully committed to Aston Villa. He loves the club, I can tell you that, and he can tell you that too."

Aside from Nem, Villa are also in danger of losing players like Will Hughes and Mattheus to the other side of London. 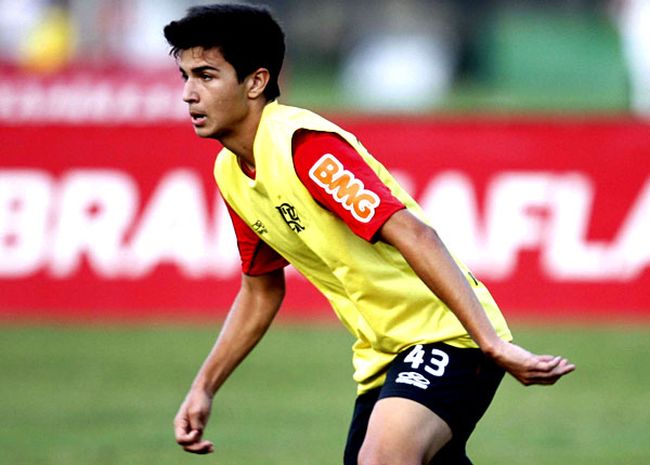 Chelsea are extremely interested in the Aston Villa pair and had reportedly enquired about Hughes earlier in the summer. 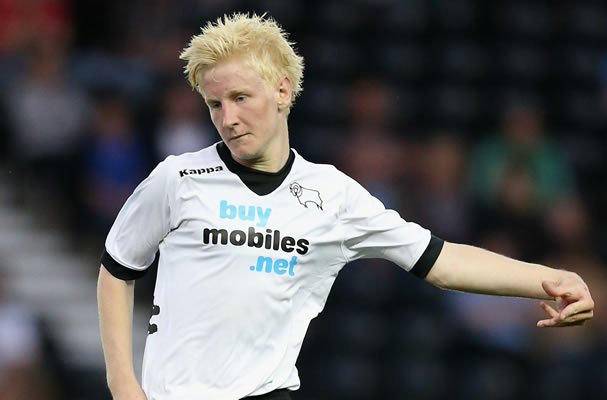 However, the latest to be linked out of the Villa door is goalkeeper Francesco Bardi.

The Italian goalie is Beckham's fourth number one in five years, but is set to retain that role at Villa Park this season after an impressive debut year as a Villa player, where he won himself a treble of trophy medals and conceded 51 goals in 53 appearances as well as keeping 22 clean sheets in all competitions.

Unfortunately, oil-rich Paris Saint-Germain are keen on bringing the 25-year-old former Internazionale man to Parcs de Princes as competition to current first-team keeper Salvatore Sirigu, who happens to be an Italian like Bardi. The Qatarian-owned French club had submitted an offer of an unknown transfer fee, but it had been flatly rejected by Aston Villa. 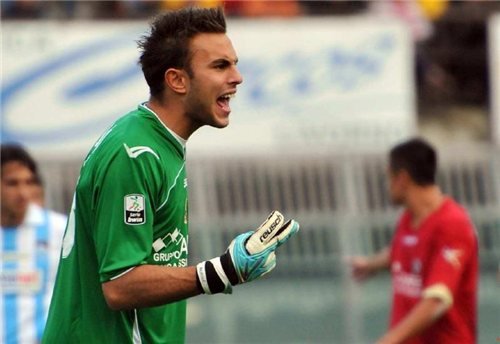 Beckham faces an especially tough fight to keep Hughes as the 22-year-old's contract expires at the end of the season.

The former Derby midfielder joined Aston Villa in 2013 for 6 million, and has been a regular in the side ever since. However, his reluctance to sign a contract extension has only hinted at a probable move to a bigger side this summer or in January.
Login to Quote

TheFMBeast
8 years
Screenshot of Mattheus please , and hopefully you keep your star playersss!
1
Login to Quote